The Baleine Lithotectonic Domain was defined by Lafrance et al. (2020) in a regional synthesis of the Southeastern Churchill Province (SECP; Lafrance et al., 2018). This domain now includes the “Kuujjuaq Domain” as defined by Wardle et al. (2002) and Corrigan et al. (2018). These authors propose that the Lac Tudor Shear Zone (ZCtud) extends NW to join the Lac Turcotte Fault (FAtur), implying that the northern part of the Baleine Domain would be associated with the George Lithotectonic Domain or the “Core Zone”. However, this extension has not been observed in the field, which led Lafrance et al. (2020) to question the existence of the ZCtud in this area and, consequently, the location of the northern limit of the “Kuujjuaq Domain” of Wardle et al. (2002) and Corrigan et al. (2018). Lafrance et al. (2020) mention that if such a limit exists, it would be represented by the Koksoak Shear Zone, although there is no evidence that terrains on either side of this structure underwent a distinct Archean tectonic evolution. They thus group this vast territory within a single domain, the Baleine Lithotectonic Domain, considering that the latter was affected as a whole by the New Quebec Orogen during the Paleoproterozoic.

Prior to this work, the term “Kuujjuaq Terrane” was also used to designate the northern part of the Baleine Domain, which was then interpreted as representing the northern extension of the domain containing the De Pas Supersuite (Perreault and Hynes, 1990). This terrane was then divided into two domains separated by the Pingiajjulik Fault, the Gabriel Domain, to the west, and the Berthet Domain, to the east (Perreault and Hynes, 1990; Poirier et al., 1990; Wardle et al., 1990). Following their work along the western shore of Ungava Bay, Bardoux et al. (1998) recommended abandoning this term since no major discontinuities had been observed in this area. Instead, they proposed to use the name “Kuujjuaq Tectonic Zone” to represent the entire area between the FAtur and the Rivière George Shear Zone. Simard et al. (2013) and Lafrance et al. (2014) also divided the NW part of the Baleine Domain into the Gabriel, Baie aux Feuilles and Buteux domains. These domains were not extended southward. According to Lafrance et al. (2020), these could be considered as subdomains within the Baleine Domain, but more detailed work would be required to better define them.

In southern SECP, the Baleine Domain corresponds in part to the “McKenzie River Domain” defined in Labrador by James et al. (1996). This term has been used by several authors (Kerr et al., 1994; James and Dunning, 2000; Hammouche et al., 2011) to represent an Archean orthogneiss terrane. Van der Leeden (1990) also used the term “Tudor Lake Shear Zone Domain”. Also in the southern area, metasedimentary rock units of the Grand-Rosoy Suite, formerly assigned to the Rachel-Laporte Lithotectonic Domain (Girard, 1995; Hammouche et al., 2011), have been assigned to the Baleine Domain by Lafrance et al. (2020). Geochronological results indicate that the detrital material of this unit comes solely from the erosion of Archean rocks, thus justifying this new affiliation. 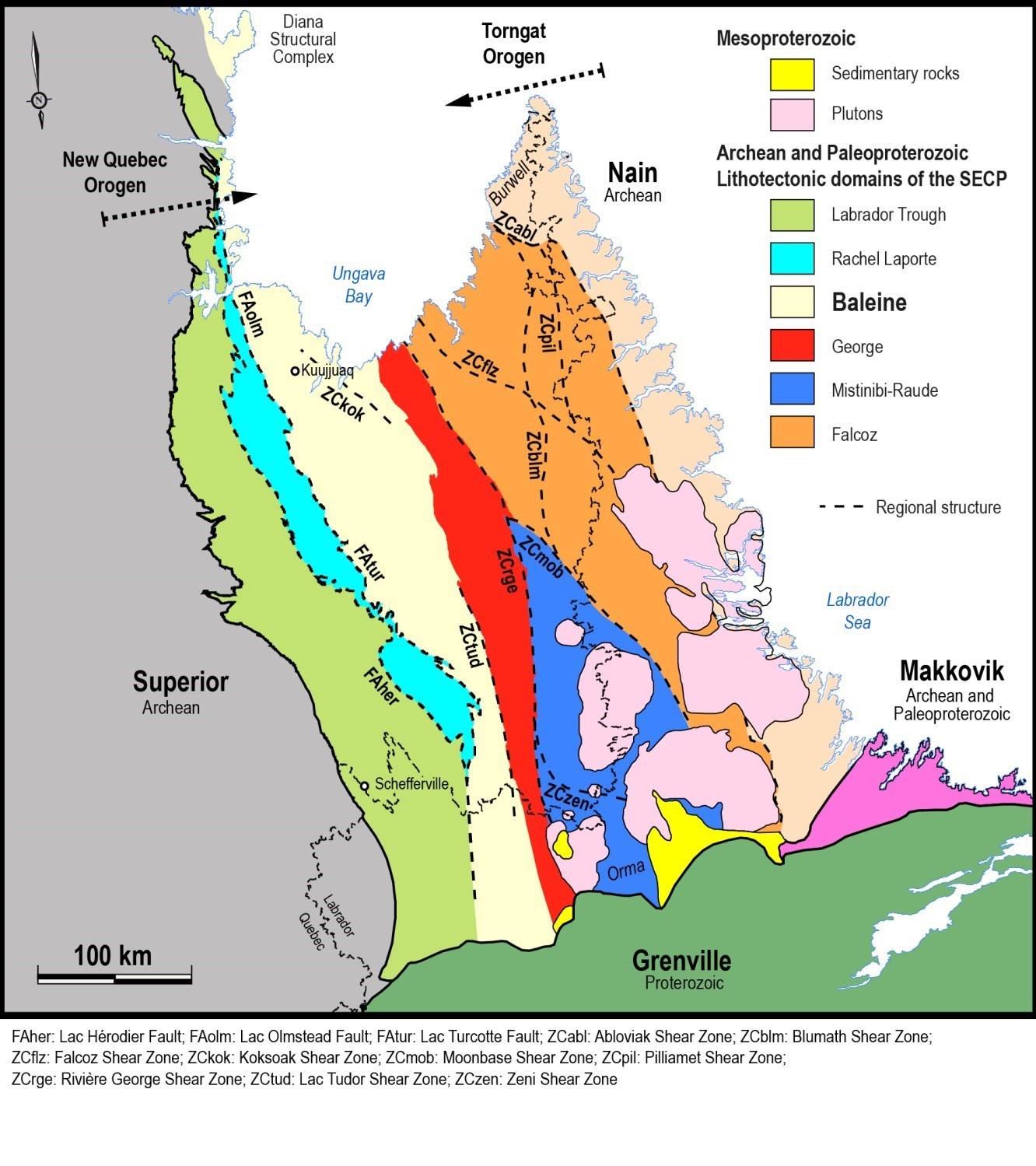 The Baleine Lithotectonic Domain, located in the west-central part of the Southeastern Churchill Province (SECP), is 615 km long by 15 to 100 km wide, for a total area of 36 365 km2. It is oriented generally NNW-SSE, except in the southern part where its orientation is more N-S. It is bordered to the east by the George Lithotectonic Domain, with which it is in fault contact in the southern part of the SECP (ZCtud). In the northern part, the contact is more arbitrarily defined and locally masked by the presence of large zones of late-tectonic intrusive rocks of the De Pas Granitic Suite. On the western side, the Baleine Domain is in contact with the Rachel-Laporte Domain through large relay faults, which are represented, from north to south, by the Lac Olmstead and Lac Turcotte faults. At its southern end, the Baleine Domain is in contact with the Labrador Trough through the Gill Lake Fault.

Rocks of the Baliene Domain have been grouped into different lithodemic units, mainly suites and complexes, according to the North American Stratigraphic Code (NACSN, 2005; MER, 1986; Easton, 2009) and taking into account the established nomenclature. These units were defined based on available geological and geochronological data. They are presented chronologically in the legend of the geological map by Lafrance et al (2020) and in the table below. Only lithologies of the main units are mentioned. References to ages cited in this record can be found in Lafrance et al. (2020) as well as in respective stratigraphic records of the different geological units.

The Baleine Lithotectonic Domain can be divided geographically into four sections according to lithological characteristics and structural styles of each section.

The central section is characterized by the presence of an extensive cover of Neoarchean metasedimentary rocks associated with the False Suite (<2678 Ma), which were affected by a major Paleoproterozoic partial melting event. This event resulted in the production of a large volume of diatexite and metatexite (Winnie Suite) with an estimated age of emplacement between 1838 Ma and 1807 Ma. The False and Winnie suites cover nearly 25% of the Baleine Domain. The central section of the Baleine Domain also includes Neoarchean potassic intrusive rocks of the Saffray Suite (2696-2683 Ma) associated with strong positive aeromagnetic anomalies of general E-W orientation.

Although it covers larger areas in the north, gneissic bedrock of the Baleine Domain (Ungava Complex) has been observed throughout the domain and represents >20% of its total area. These gneiss are migmatized to varying degrees, with the areas most affected by partial melting being assigned to the Qurlutuq Complex. The Aveneau Suite (1818-1811 Ma) is another unit of important surface area (~12%) observed throughout the entire Baleine Domain. It consists of white tonalite and granite containing schlierens interpreted as the end product of regional partial melting in the Paleoproterozoic (Simard et al., 2013).

The northern and southern sections of the Baleine Doamin are distinguished from the central section by the presence of a few particular units, the main ones being the Kaslac Complex (1835-1827 Ma) in the northern part, and the Knox Complex (2823-2619 Ma) and the Champdoré (1859-1837 Ma), Lhande (1834 Ma) and Grand Rosoy (<2618 Ma) suites in the southern part. The Grand Rosoy Suite, which represents a meta-arkose and meta-arenite sequence, is interstratified with paragneiss and amphibolite units of the Akiasirviup and Curot suites. These suites are concentrated at the western edge of the domain and outcrop mainly in the northern and southern sections, whereas they form only a thin strip in the central section.

The last section is associated with the Diana Structural Complex, an independent unit that represents the detached NW end of the Baleine Domain. This complex consists of a package of gneissic tonalite and stris of paragneiss, amphibolite and ultramafic rocks of Archean and Proterozoic age that was affected by intense deformation and metamorphism during the Paleoproterozoic. The various units included in the Diana Structural Complex could possibly be correlated with other units listed in the table below. However, divisions used by Madore and Larbi (2000) are different from those presented by Lafrance et al. (2020); field checks would be required to perform this correlation exercise.

The geological history of the Baleine Domain begins in the Archean with the emplacement of most of the constituent stratigraphic units. The oldest units are the Ungava, Knox and Qurlutuq gneissic and migmatitic complexes, with crystallization ages ranging from 2843 Ma to 2619 Ma, as well as the Saffray Suite (2696-2683 Ma). These units are interpreted as representing the bedrock on which metasedimentary rocks of the Akiasirviup, False and Grand Rosoy suites were deposited (Lafrance et al., 2020). The significant age spread of gneissic complexes suggests that there may be several different units within them (Lafrance et al., 2020). Although gneiss ages are unevenly distributed across the Baleine Domain, available data suggest that gneiss bedrock is older in the northern part of the domain (Lafrance et al., 2020).

The stratigraphic diagram presented by Lafrance et al. (2020) illustrates initial relationships between Archean to Paleoproterozoic units and Paleoproterozoic to Mesoproterozoic intrusive rocks. Some aspects of the Baleine Domain’s evoulution during the Archean remain unclear. For example, it is generally accepted that this domain was attached to the Superior Craton (Perreault and Hynes, 1990; James and Dunning, 2000; Wardle et al., 2002; Lafrance et al., 2014; Rayner et al., 2017; Corrigan et al., 2018; Lafrance et al., 2020) prior to rifting of the Archean continent along its NE margin at ~2.2 Ga (Clark and Wares, 2004). The Baleine Domain would thus represent, along with the Rachel-Laporte Domain, one of the two constituents of the SECP to contain rocks that previously belonged to the Superior. This hypothesis is based on geochronological data and comparable compositions of certain units observed in the SECP and the Superior Province, as well as on the possible extension of large E-W magnetic anomalies on either side of the Labrador Trough (Lafrance et al., 2020). In addition, geochronological results indicate that Archean units underwent some degree of partial melting in the Archean ~2809 Ma (Augland et al., 2016). However, imprint of this tectometamorphic event was largely obliterated during emplacement of the New Quebec Orogen in the Paleoproterozoic (Moorhead, 1989; Poirier, 1989; Goulet, 1995). This is confirmed by numerous metamorphic ages (1864 Ma-1786 Ma) obtained in the Ungava Complex.

During edification of the New Quebec Orogen, upper amphibolite or granulite facies metamorphic conditions were reached at the scale of the domain (Poirier, 1989; Perreault and Hynes, 1990; Simard et al., 2013; Lafranceet al., 2014 and 2020; Charette et al., 2016; Godet et al., 2020), indicating burial under conditions of medium crustal conditions responsible for the formation of migmatites and plutonic masses. A significant portion of the material produced comes from partial melting of metasedimentary rocks and constitutes migmatites of the Winnie Suite. Gneiss of the Ungava Complex also underwent an anatexis process that is at the origin of part of the Aveneau Suite (Simard et al., 2014). Nevertheless, the origin of magma composing most of this suite remains ambiguous.

EASTON, R.M., 2009. A guide to the application of lithostratigraphic terminology in Precambrian terrains. Stratigraphy; volume 6, pages 117-134.