The Kaslac Complex was introduced by Simard et al. (2013) in the Kuujjuaq area to describe a package of highly deformed and recrystallized metamorphosed ultramafic to felsic intrusive rocks. This unit was extended southward in the northern part of the Saffray Lake area (Lafrance et al., 2014). The Kaslac Complex was also the subject of an academic research project (Lamirande et al., 2016; Lamirande and Bilodeau, 2018).

The Kaslac Complex consists of a complex package of gneissic to mylonitic, primarily intermediate intrusive rocks. Several rocks of the Kaslac Complex contain orthopyroxene whose magmatic or metamorphic origin could not be clearly established due to the strong deformation and amphibolite facies retrograde metamorphism of pyroxenes. However, the presence of anorthosite, leuconorite and remnants of coronitic textures suggests that this complex could be attached to a charnockitic suite (Simard et al., 2013). In several places, rocks contain highly altered orthopyroxene.

The Kaslac Complex is regionally distinguished by a strong magnetic signature and consists of four units: 1) gneissic, banded or homogeneous diorite and quartz diorite (pPkaa1); 2) garnet-magnetite-rich metagabbro (pPkaa2); 3) mafic and ultramafic intrusions (pPkaa3); and 4) quartz-rich granitoid (pPkaa4). In many cases, lithological assemblages belonging to more than one unit are found on the same outcrop.

Unit pPkaa1 is divided into two main subunits based on the absence (pPkaa1a) or presence (pPkaa1b) of pyroxenes. 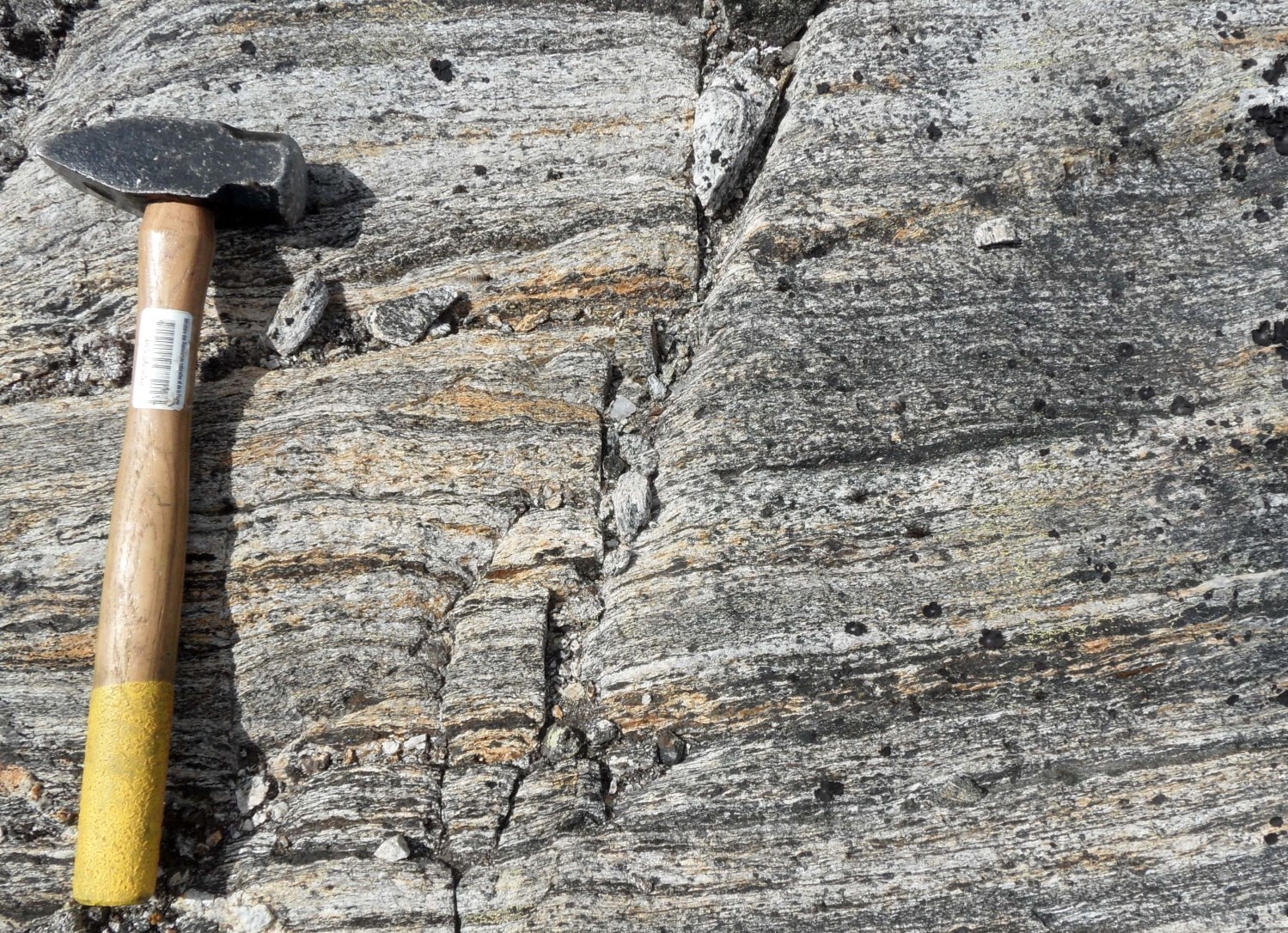 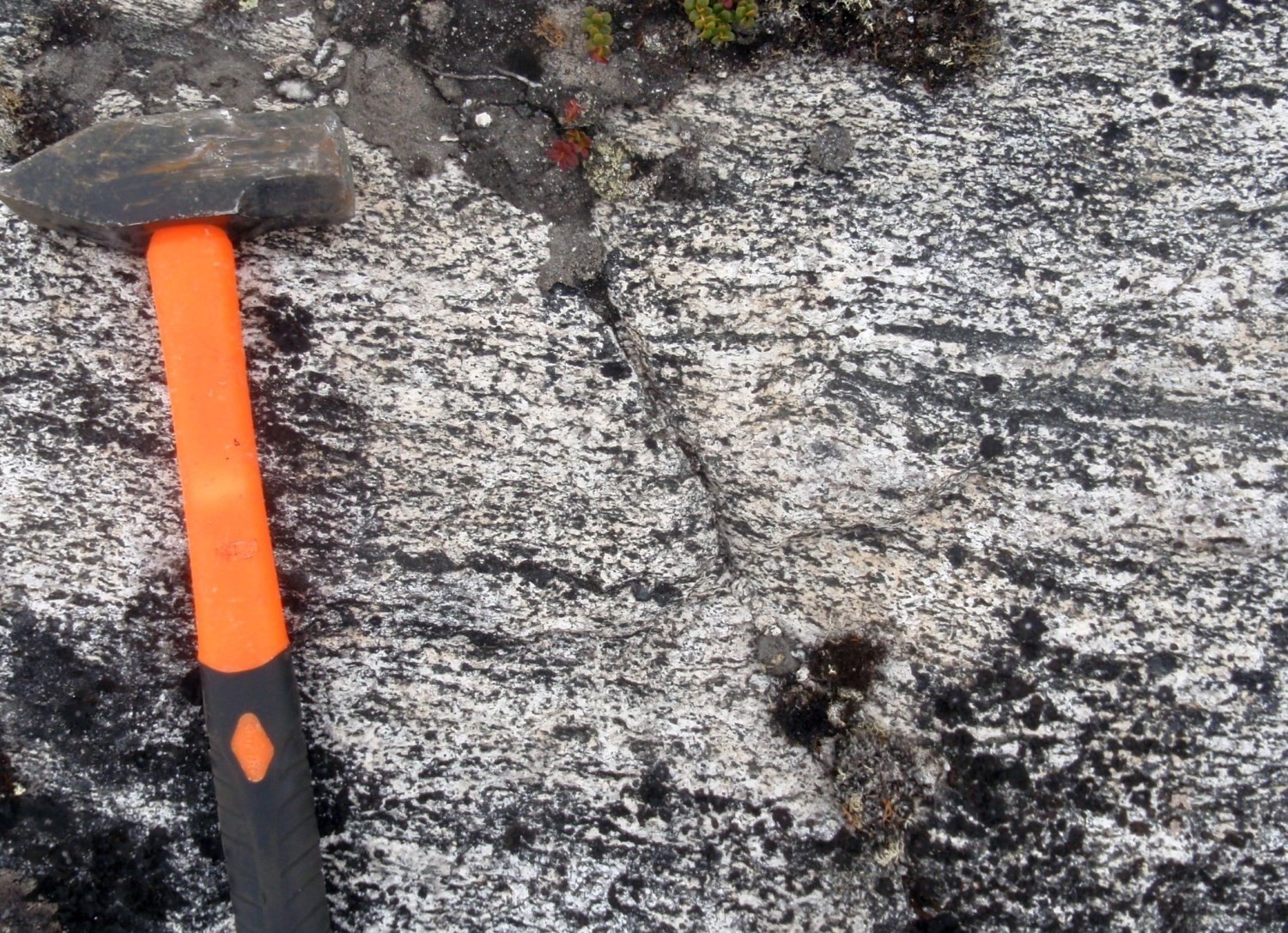 Rocks of subunit pPkaa1a include diorite and quartz diorite, locally tonalite, granoblastic and medium-grained, having a gneissic, banded or homogeneous appearance. Intense deformation led to the development of 5-20% millimetric quartz bands (protomylonitic texture). The banded facies consists of alternating light grey to dark grey millimetric to centimetric bands. In several places, there are lenticular whitish bands likely corresponding to leucosome or boudinaged injections, which would have been emplaced at the beginning of the deformation episode. For the homogeneous facies, diorite is light grey to brown and well foliated to mylonitic. In rocks of subunit pPkaa1a, ferromagnesian minerals (10-30%) form submillimetric clusters stretched parallel to foliation. In thin sections, these clusters are composed of a multitude of small grains usually at an angle with foliation, involving post-tectonic or late tectonic metamorphic recrystallization. These ferromagnesian minerals consist of amphiboles (hornblende and actinolite) and dark brown to red biotite. These grains form much intergrowth between them and with plagioclase that explain the special and typical appearance of these rocks in thin sections. They are locally heavily altered into a mixture of chlorite and opaque mineral dusts. Locally coronitic, clinopyroxene and orthopyroxene were observed in places. Other accessory minerals are epidote, garnet, chlorite, muscovite, tourmaline, allanite, sphene, magnetite and ilmenite. Rocks of subunit pPkaa1a alternate regularly with millimetric to metric layers of lithologies of the other units of the Kaslac Complex. The most common lithologies include gabbro and leucogabbro of unit pPkaa3 and quartz-rich granitoids of unit pPkaa4. 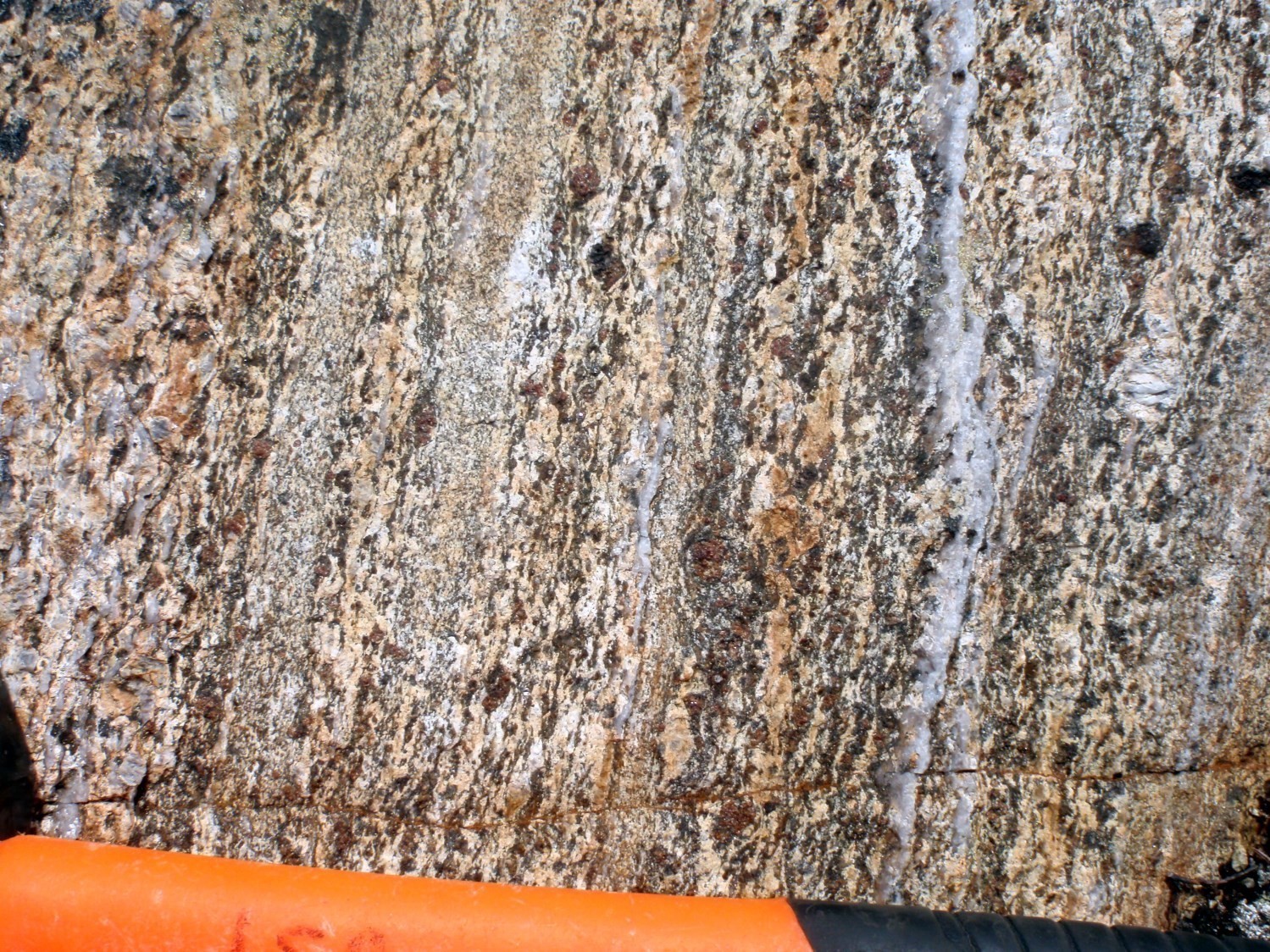 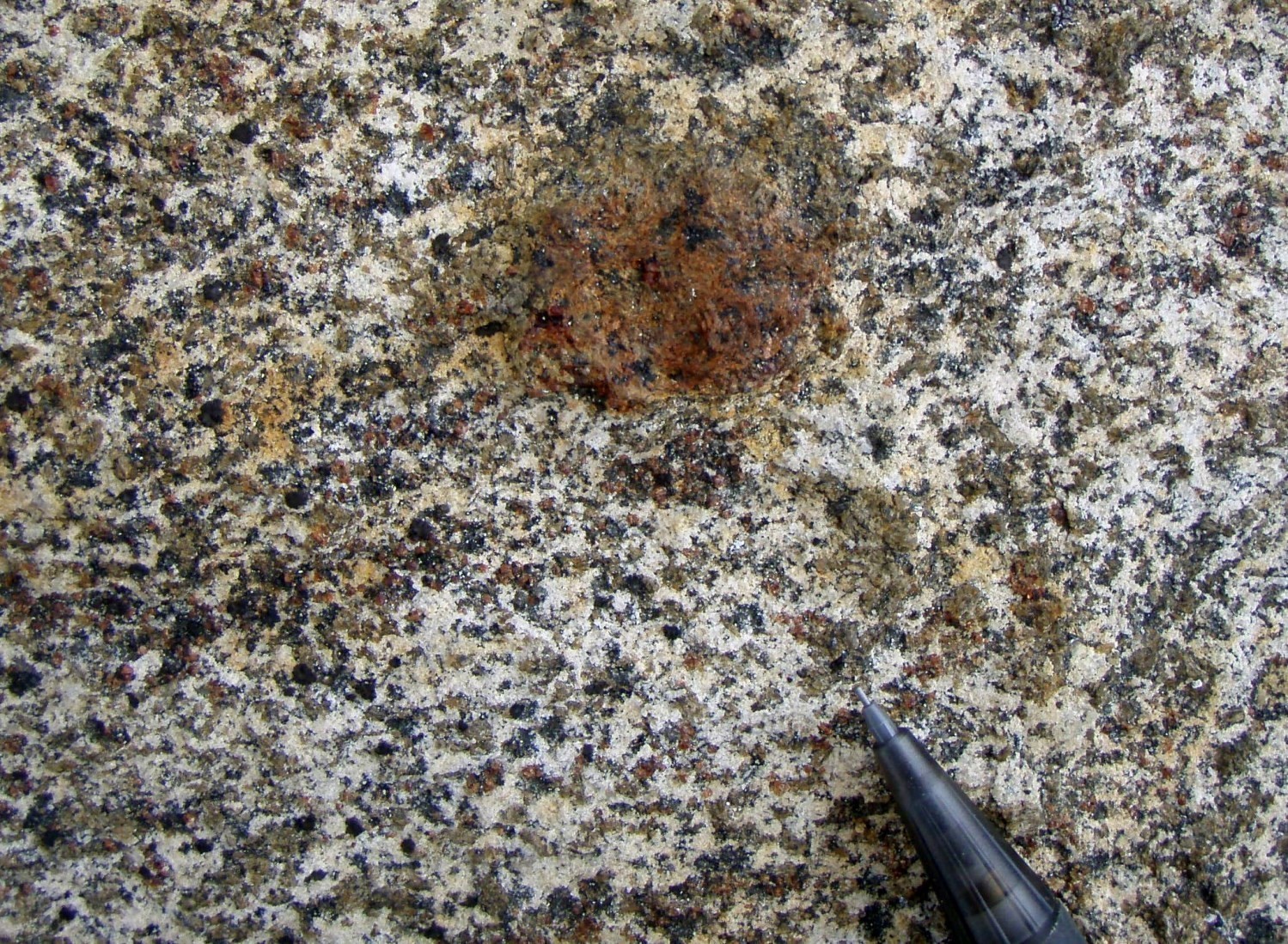 Rocks of subunit pPkaa1b have a brown sugar or greenish-grey colour typical of orthopyroxene rocks. They form alternating fine-grained and coarser-grained bands that could represent leucosome or injections transposed during deformation. Coarser-grained bands commonly contain millimetric to centimetric grains of garnet and orthopyroxene. Both types of bands include ferromagnesian mineral clusters mostly consisting of fibrous actinolite and red biotite flakes. These clusters also contain a certain amount of highly serpentinized orthopyroxene and clinopyroxene, the latter in the centre of actinolite clusters. Small millimetric grains of garnet were also observed in several places. Accessory minerals are magnetite, apatite, ilmenite and chlorite.

Subunit pPkaa1c is described by Gold (1962) as a garnet-hornblende-biotite-plagioclase-quartz gneiss. Very little information is available as the unit was not visited during recent mapping work.

Unit pPkaa2 consists of different facies of heavily recrystallized gabbro. It has a very strong and contrasting aeromagnetic signature compared to other units of the Kaslac Complex. This intense magnetism is due to abundant magnetite (up to 10%). Unit pPkaa2 is subdivided into several non-mappable facies that form at least two monoclinal successions consisting of more or less regular metre-thick and a few kilometres long layers or lenses. This arrangement is interpreted as magmatic layering. The main facies consists of garnet porphyroblastic iron oxide gabbro. Secondary facies include garnet-free gabbro and a facies whose composition changes from anorthosite to melanocratic gabbro. A few rare metric websterite and peridotite lenses can also be interstratified with rocks of the previous facies. 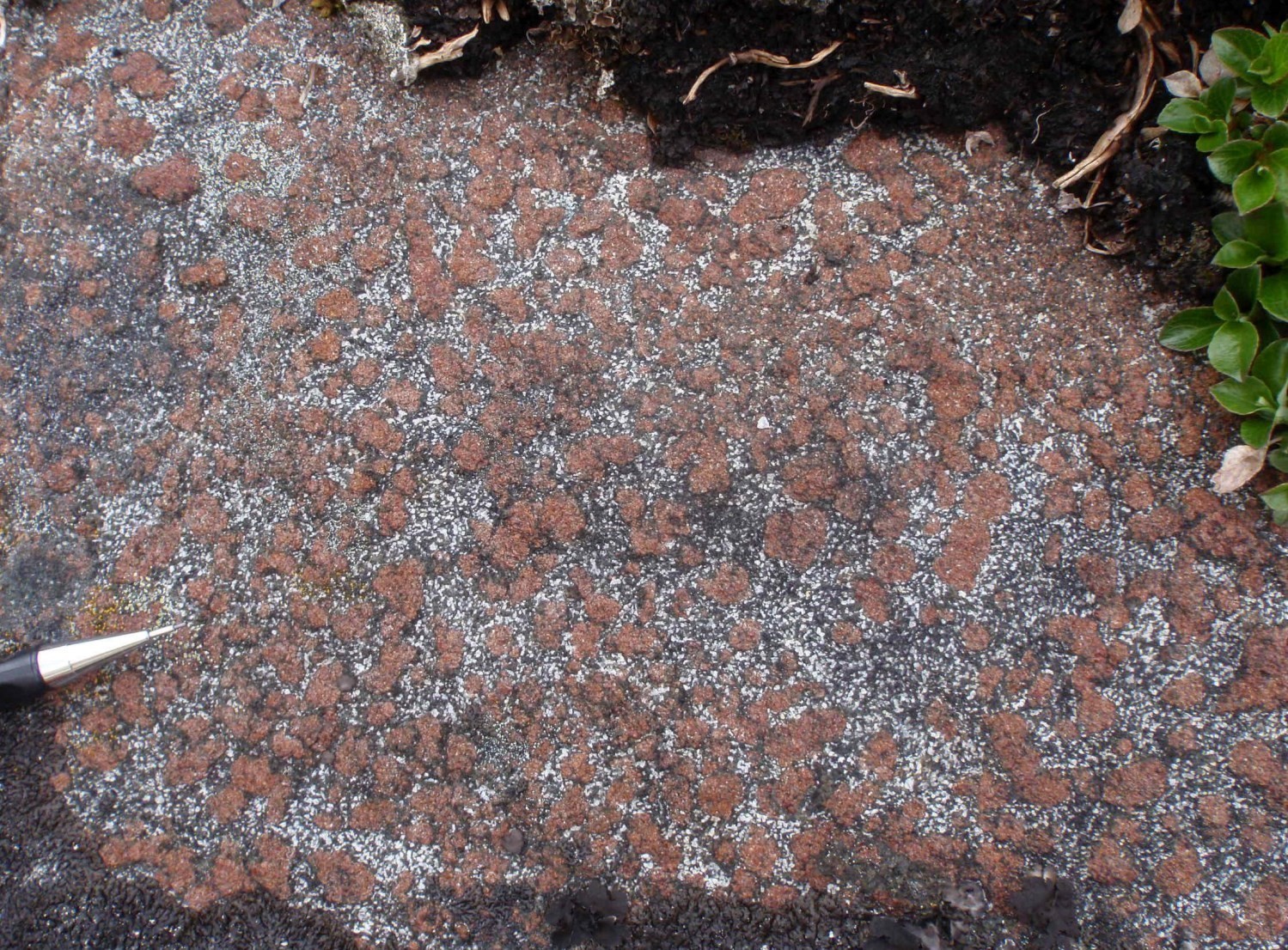 The presence of a significant number of garnet porphyroblasts in the main facies of the pPkaa2 unit gives the rock a characteristic reddish colour in altered surface. These porphyroblasts are poikilitic, coronitic and represent up to 50% of the rock. Black coronas are well developed and consist of hornblende and plagioclase. The matrix is composed of a generally heterogeneous plagioclase-hornblende ± clinopyroxene ± magnetite ± ilmenite assemblage. Garnet contains clinopyroxene ± hornblende ± plagioclase ± magnetite ± ilmenite inclusions. Some samples are also rich in Fe-Ti oxides. Primary magmatic textures are completely obliterated. In more deformed areas, the fabric becomes locally gneissic and the modal proportions of ferromagnesian minerals and garnet vary with the bands. Rocks are locally characterized by the presence of garnet-clinopyroxene-hornblende melanosome spatially associated with a small amount of plagioclase-rich leucosome resulting from partial melting. These migmatized rocks occur as metric to decametric layers interstratified with unmelted facies. The garnet-free gabbro facies is more abundant at the edges of intrusions. It consists of gabbro, gabbronorite and norite, locally containing Fe-Ti oxides. Pyroxenes are mostly retromorphosed to amphiboles. Rocks are typically greenish grey in patina and granoblastic. The latter facies does not appear to have been affected by partial melting.

The layered facies, which changes from anorthosite to melanocratic gabbro, is composed of varying amounts of plagioclase and clinopyroxene generally replaced by hornblende. It also locally contains garnet. Rocks are usually foliated, granoblastic or speckled. They form metric layers interstratified in other facies of the pPkaa2 unit. Contacts are diffuse, with modal proportions of ferromagnesian minerals and garnet gradually changing. There are also layers several tens of metres thick displaying alternating leucocratic to melanocratic wavy centimetric bands, interpreted as primary magmatic layering. Garnet forms porphyroblasts associated with ferromagnesian minerals. In highly foliated areas, garnet form fragmented polycrystalline aggregates or appear as a diffuse rim around ferromagnesian minerals. These mafic facies contain a few rare metric lenses of rusty websterite and peridotite. At the outcrop scale, these rocks define decimetric layers of magmatic origin composed of an orthopyroxene-olivine-clinopyroxene-spinel-magnetite assemblage. Pyroxene and olivine are serpentinized. 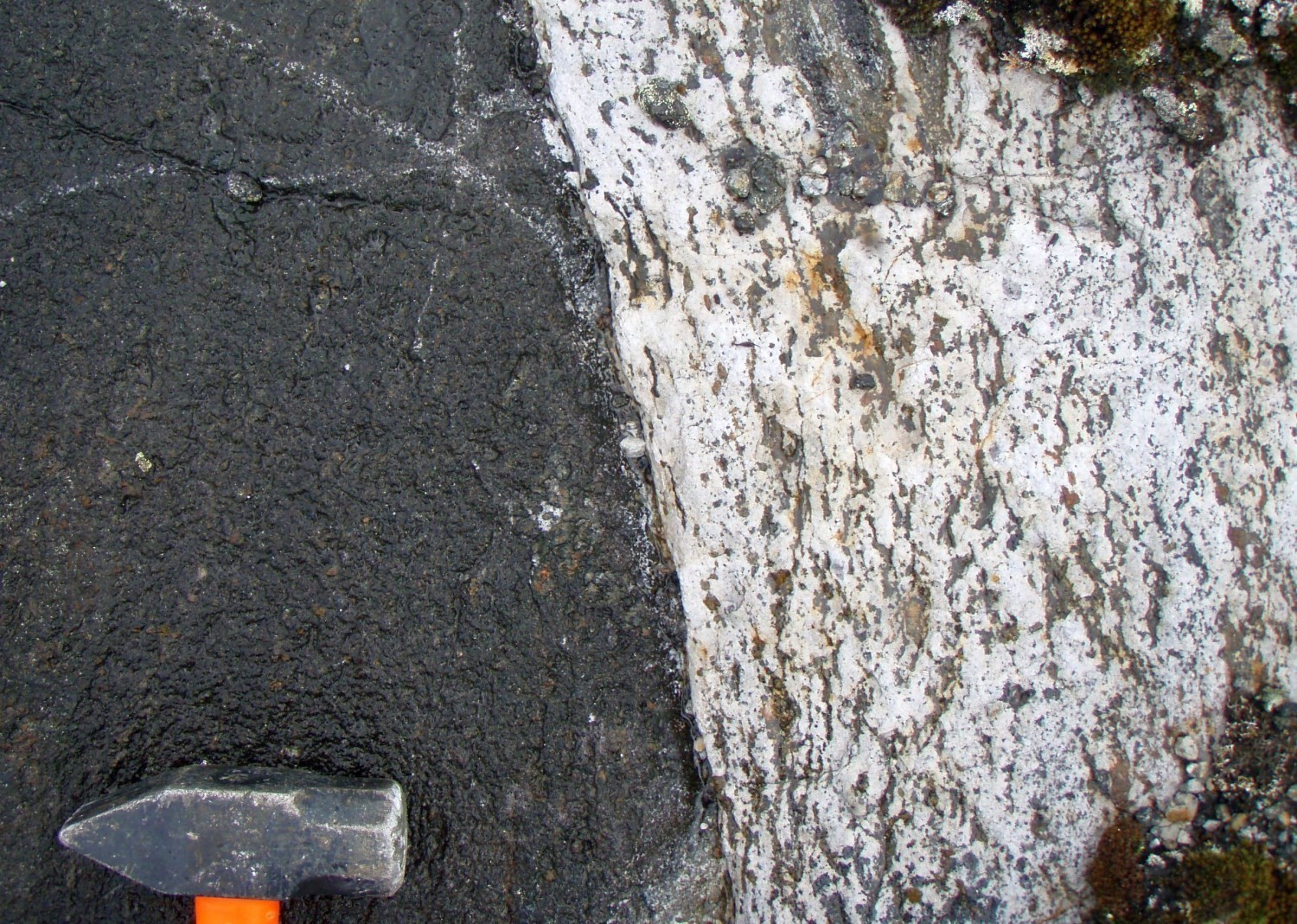 Mafic and ultramafic intrusions of unit pPkaa3 mainly consist of two subunits based on the proportion of ferromagnesian minerals. The first (pPkka3a) consists of variably amphibolitized gabbro, gabbronorite and clinopyroxenite. The second (pPkaa3b) consists of more leucocratic rocks consisting of leucogabbro, leuconorite, diorite, monzonite and anorthosite. A third subunit of amphibolite (pPkaa3c) is also associated with these intrusions. 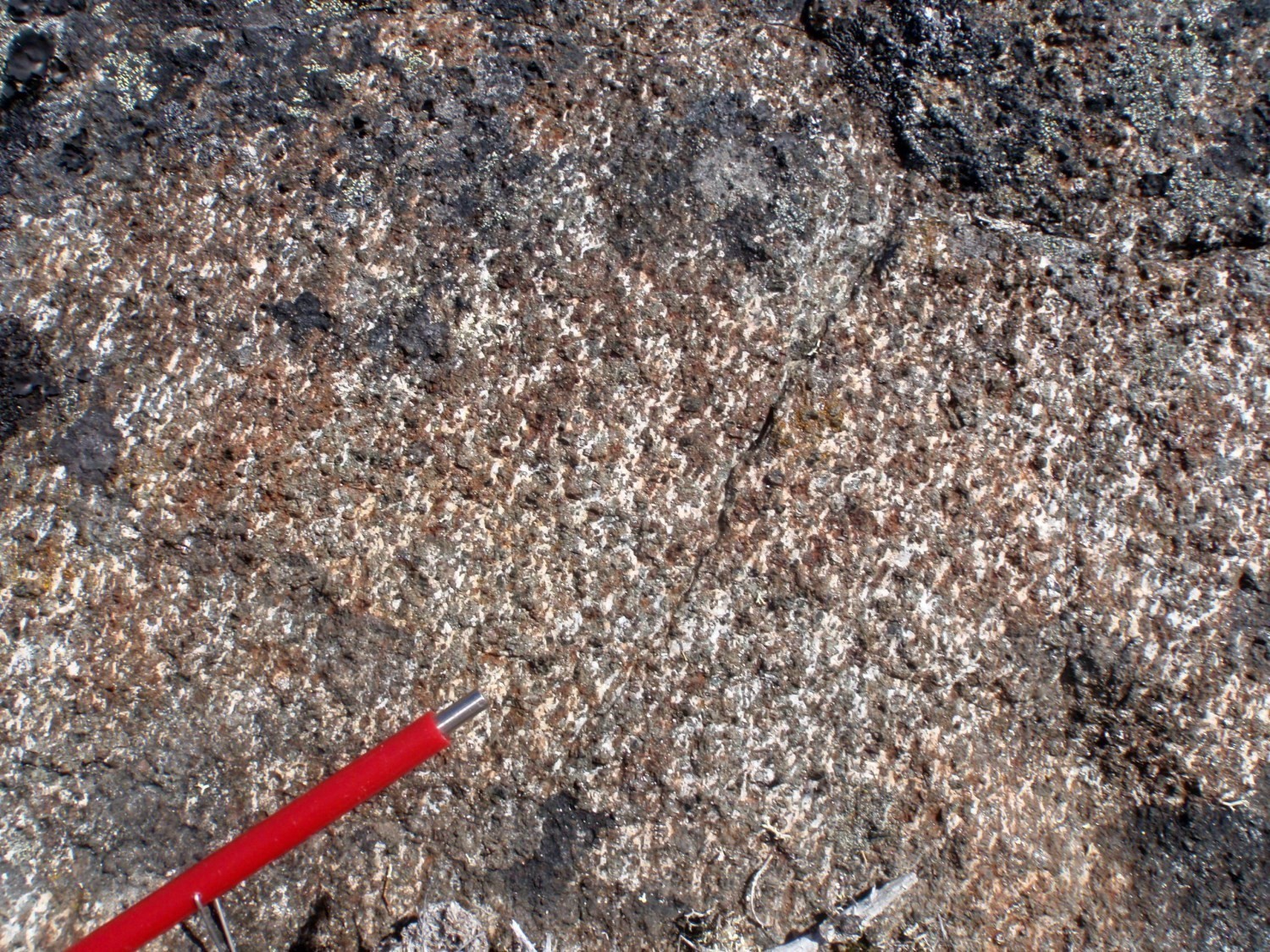 Rocks of subunit pPkaa3a contain 50% to 70% ferromagnesian minerals, a proportion that can reach 90% in some decimetric to metric layers. These rocks are black or dark green, well foliated and medium to fine grained. Ferromagnesian minerals consist of clinopyroxene and brown or green amphiboles, especially hornblende and fibrous actinolite. Orthopyroxene was also observed locally. Clinopyroxene is partially replaced by amphiboles, so it is possible that the majority of amphiboles present are caused by the alteration of pyroxene. These rocks are highly recrystallized, although locally some of the coarser pyroxene or amphibole crystals have been partially preserved in the granoblastic matrix. Plagioclase-hornblende symplectites are observed around these grains. Accessory minerals are biotite, magnetite, sphene, ilmenite, apatite and carbonate. 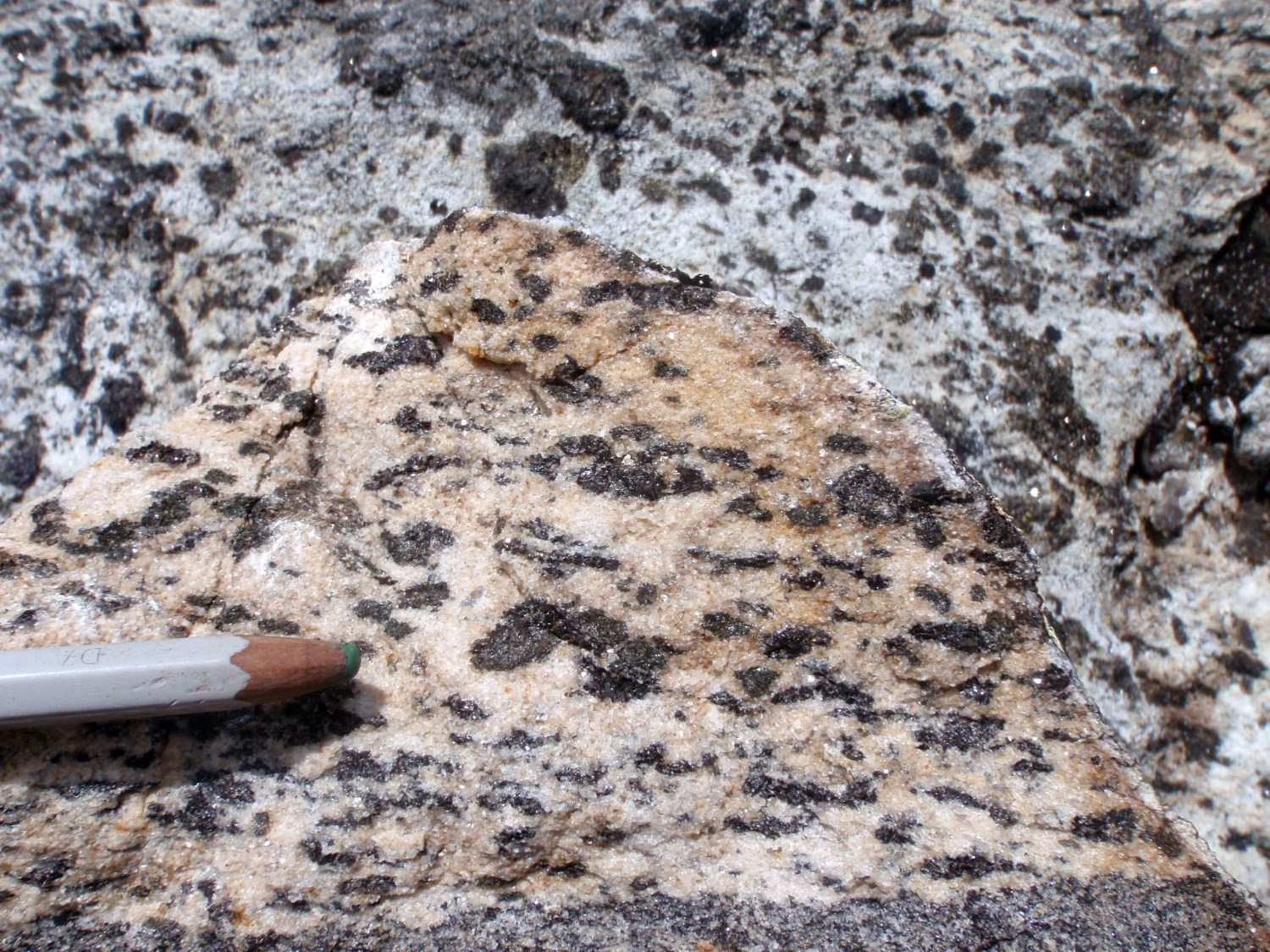 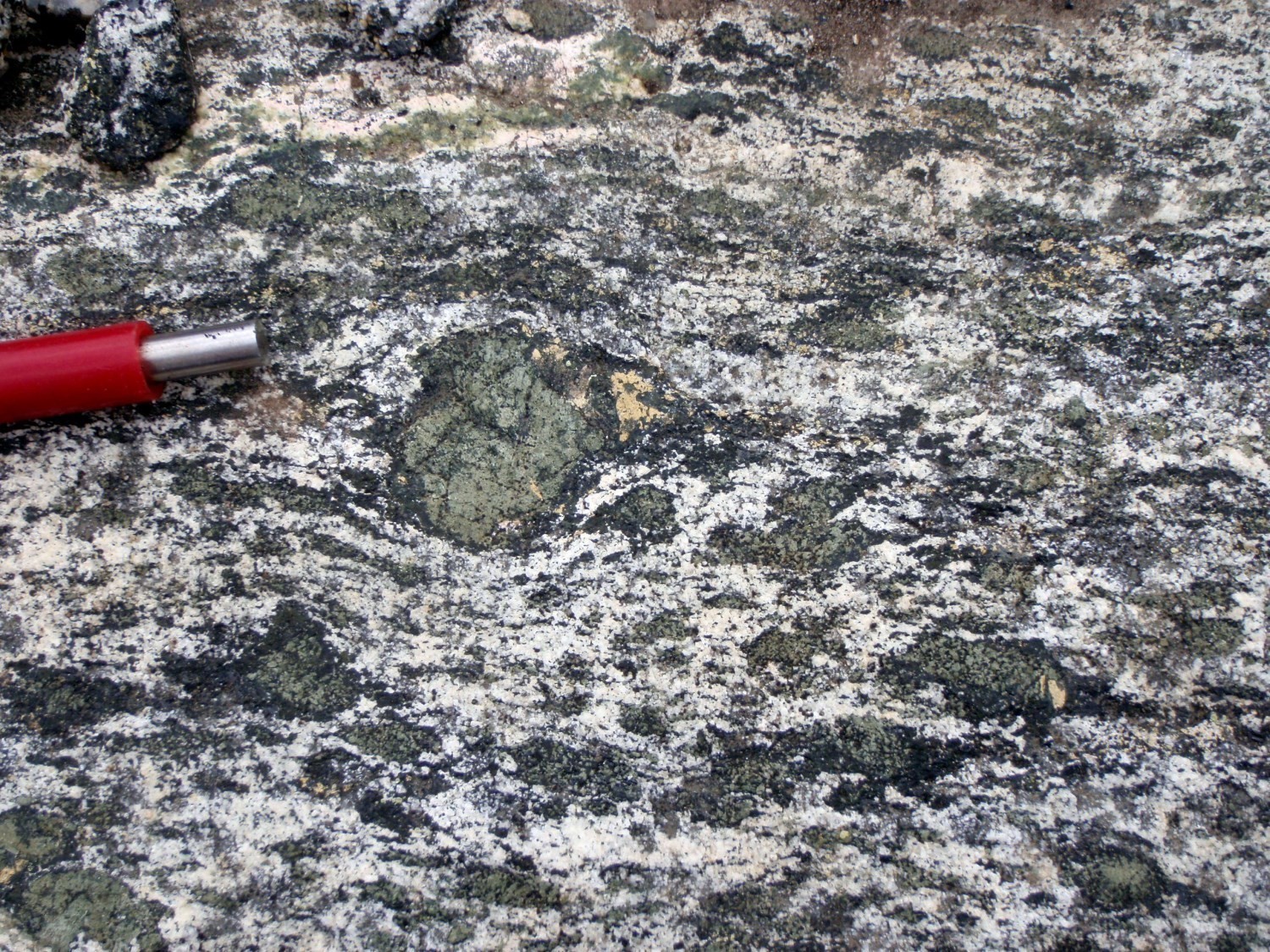 Subunit pPkaa3b consists of highly deformed (mylonitic) leucogabbro, leuconorite, diorite, monzonite and anorthosite. These rocks contain 5% to 30% ferromagnesian minerals and have a characteristic speckled appearance formed by a whitish granoblastic plagioclase matrix containing millimetric to centimetric lenticular clusters of black or green ferromagnesian minerals. The rock may also contain up to 12% quartz as discontinuous millimetric bands. In several places, a porphyroclastic texture is defined by the presence of 5-20% centimetric plagioclase crystals contained in a fine-grained granoblastic matrix. Although the porphyroclasts’ shape has been preserved, they are completely recrystallized. K-feldspar porphyroclasts are also observed locally. Ferromagnesian minerals (5-30%) are composed of varying amounts of green hornblende, dark brown to red biotite, clinopyroxene, apatite, opaque minerals and some sphene. Ferromagnesian mineral clusters are well stretched in foliation. Within clusters, however, minerals are finely recrystallized and randomly oriented, intergrown with each other or with silicate minerals, taking on a shattered appearance possibly associated with metamorphism or intense deformation. Some coronitic textures are observed. They are formed from a core of clinopyroxene surrounded by hornblende and biotite.

At the north end of the Baleine Domain, potentially intrusive amphibolites were also associated with the Kaslac Complex. Amphibolite is black, granular and mostly composed of hornblende with lesser amounts of quartz, plagioclase and garnet. The rock is locally schistose and represents metamorphosed intrusive or effusive rocks according to Gold (1962). 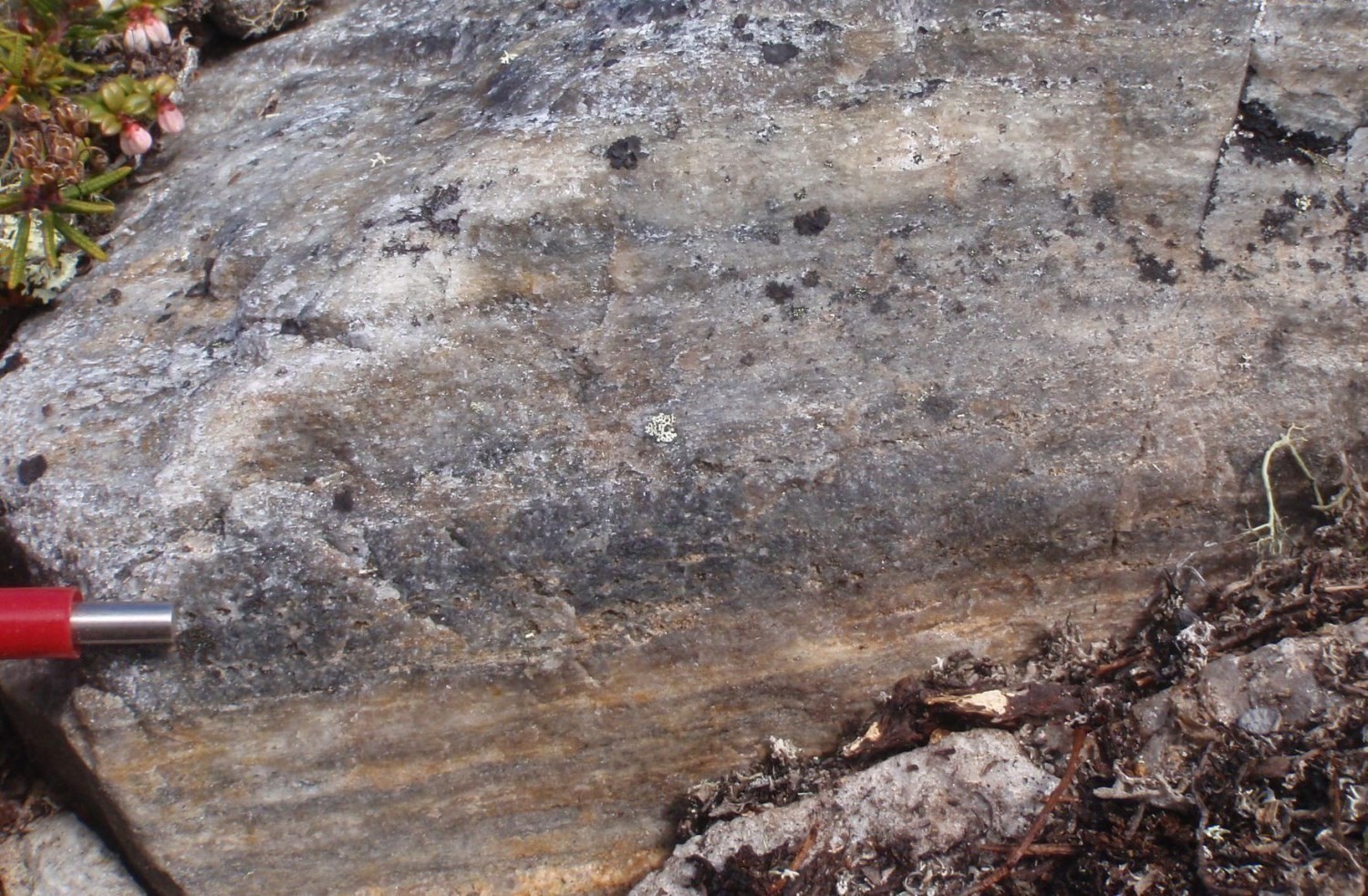 Unit pPkaa4 groups quartz-rich intrusive rocks that form a few klippes thick enough to be mapped. It usually occurs in centimetre to metre-wide layers interstratified in lithological assemblages of other units of the Kaslac Complex. The rock of unit pPkaa4 is white, beige or light grey. It is well foliated to mylonitic, fine to medium grained and entirely granoblastic. It contains 50-85% quartz in millimetric bands, variably sericitized plagioclase and some accessory minerals including garnet, biotite, muscovite, tourmaline, epidote, chlorite and rutile.

Dating felsic to intermediate intrusive rock samples indicate crystallization ages between 1835 and 1827 Ma. These ages are contemporaneous to the emplacement of other intrusive units within the Baleine Domain, namely the Champdoré Suite (1859-1839 Ma), Lhande Suite (1834 Ma), De Pas Supersuite (1862-1805 Ma), Kuujjuaq Pluton (1869-1833 Ma), as well as the crystallization of Winnie Suite diatexites (1839-1838 Ma).

The Kaslac Complex is in tectonic contact (Gabriel Fault) with metasedimentary rocks of the Akiasirviup Suite, just to the west, on which it appears to have been overthrusted (Simard et al., 2013). The Kaslac Complex is also mostly in fault contact with gneiss of the Ungava Complex. It is cut by granitoids of the Dancelou and Aveneau suites.

The relationship between units pPkaa2 and pPkaa1 is uncertain and is interpreted as more or less contemporaneous. However, felsic and intermediate rocks containing orthopyroxene and feldspar phenocrystals, some of which are similar to unit pPkaa1, are injected into mafic facies where they form metre-thick parallel layers or magmatic breccias locally. Field relationships show that these rocks are younger than mafic facies despite their deformation.