The Ungava Complex was introduced by Simard et al. (2013) in the Kuujjuaq and Ungava Bay area (sheets 24J and 24K) to describe a package of tonalitic to granitic gneiss that represents a significant portion of the Southeastern Churchill Province (SECP). The unit was tracked southward in the Saffray Lake (Lafrance et al., 2014) and Jeannin Lake (Charette et al., 2016) areas and towards the SE in the Henrietta Lake and Brisson Lake areas (Lafrance et al., 2015, 2016). After the SECP was divided into lithotectonic domains as part of a synthesis (Lafrance et al., 2018), the definition of the Ungava Complex was revised to include only gneiss located within the Baleine Lithotectonic Domain (Lafrance et al., in preparation). In the George, Mistinibi-Raude and Falcoz lithotectonic domains, similar Archean gneiss were assigned respectively to the Saint-Sauveur, Elson and Kangiqsualujjuaq complexes. The Ungava Complex also includes gneiss previously assigned to the Ballantyne Suite by Simard et al. (2013), which is now abandoned. 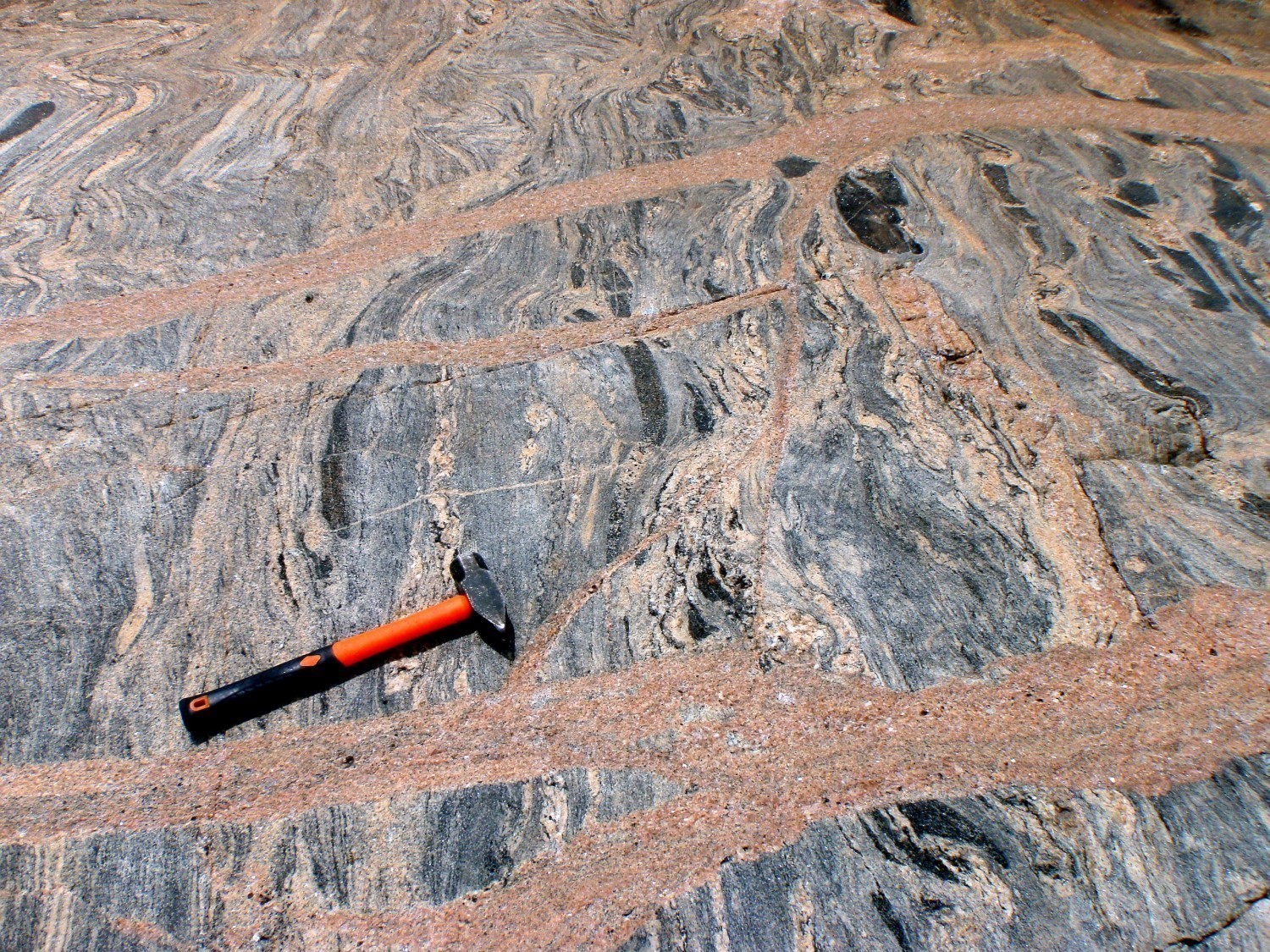 The Ungava Complex consists mainly of tonalitic to granitic gneiss. These gneiss are cut by several Proterozoic granitic phases in the form of multiple injections and dykes that are an integral part of the complex. Simard et al. (2013) identified three types of injections based on relationships observed on well-exposed outcrops along Ungava Bay: 1) pre-tectonic to syn-tectonic ancient injections that cut gneissosity, but that are also deformed and folded; 2) centimetric to decametric injections that are not folded but foliated and locally affected by shear zones; and 3) massive and undeformed straight dykes of granite and pegmatite belonging to several late phases. 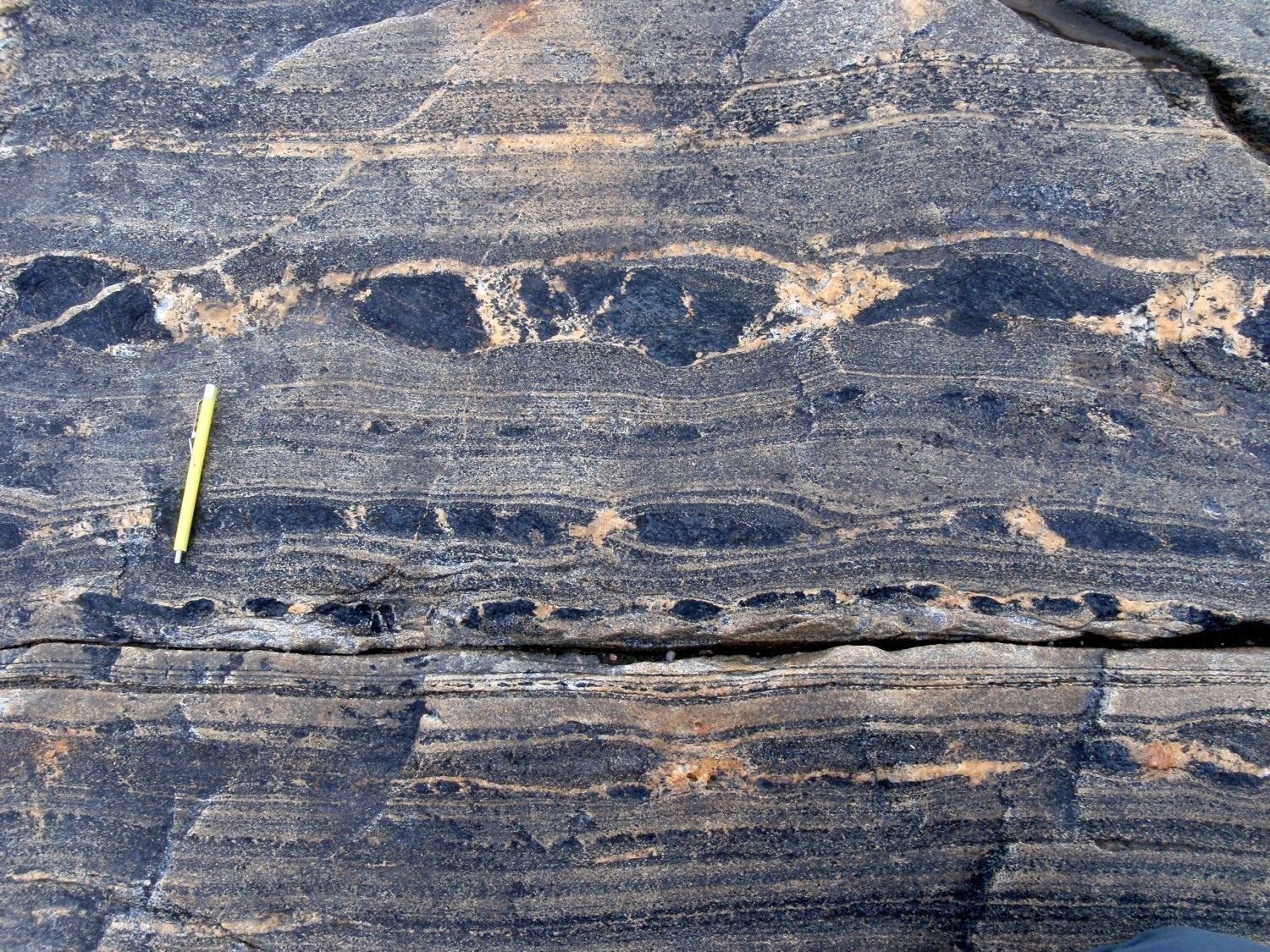 The Ungava Complex has been divided into four informal units (Simard et al. , 2013): 1) very contrasting banded tonalitic gneiss (ApPung1); 2) tonalitic gneiss characterized by the presence of whitish centimetric bands (ApPung2); 3) tonalitic gneiss containing 25% centimetric bands of pink granite (ApPung3); and 4) granitic gneiss (ApPung4). Most of these gneiss are of igneous origin; however, a sedimentary precursor is also possible in some places. Centimetre to decimetre-wide boudinaged layers of diorite or gabbro are also commonly observed in different units of the Ungava Complex. These could represent ancient mafic dykes. 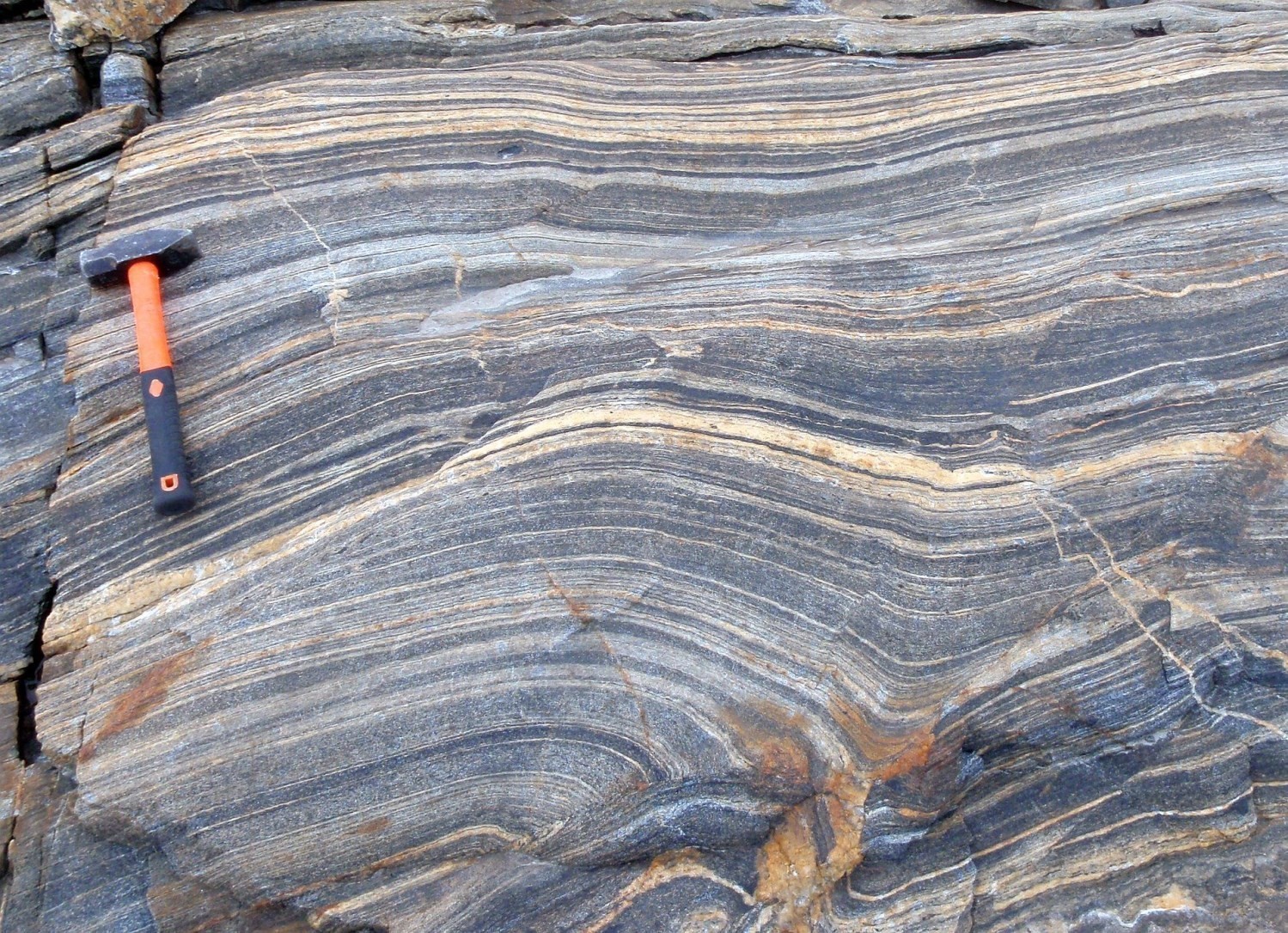 Unit Aung1 is characterized by sharp, regular, and very contrasting banding (Simard et al., 2013) produced by alternating millimetric to centimetric whitish, greyish and blackish bands. The composition of whitish to greyish bands varies from tonalitic to dioritic, respectively, while the composition of blackish bands is mainly amphibolite. Bands of various compositions can also form metre-thick layers. Tonalitic to dioritic bands or ribbons are fine to medium grained and are partially to completely recrystallized. They contain 10-25% hornblende and biotite in varying proportions. Amphibolite bands are fine grained and granoblastic. Unit Aung1 gneiss underwent low partial melting, highlighted by the presence of whitish centimetric bands of tonalitic leucosome, generally lenticular and discontinuous, parallel to gneissosity. The mobilisate represents <10% of the rock and contains local garnet (Simard et al., 2013). 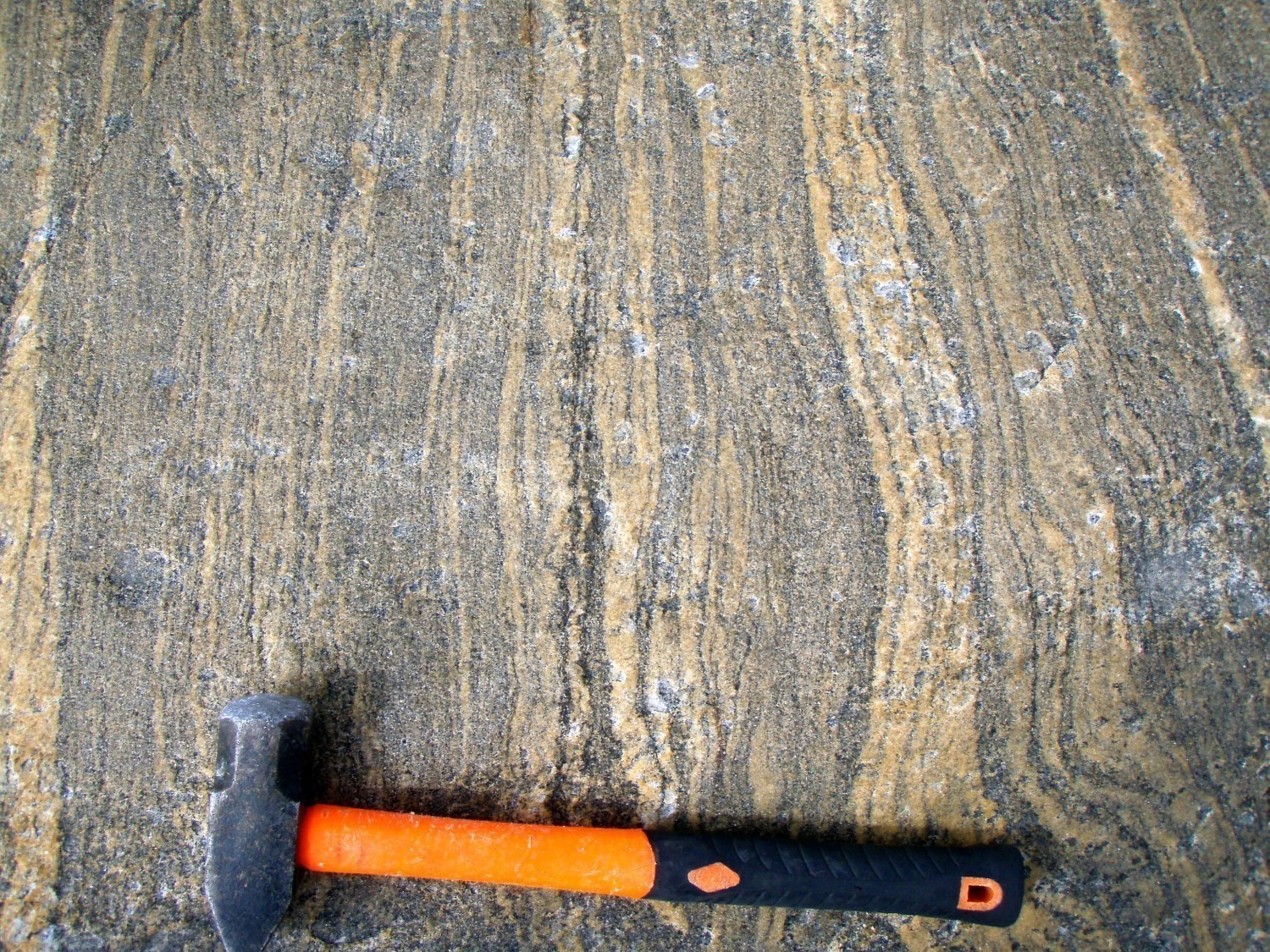 Unit Aung2 gneiss has a tonalitic composition, changing locally to quartz diorite, and is characterized by the presence of 5 to 30% millimetre to centimetre-wide whitish tonalite bands. Simard et al. (2013) distinguished three different types of bands: 1) Archean or Paleoproterozoic straight bands that have undergone the same deformation and recrystallization as the main portion of the gneiss; 2) Paleoproterozoic mobilisate bands, possibly derived from partial melting of tonalitic gneiss; and 3) centimetric to decametric Paleoproterozoic injections, parallel or slightly unconformable to gneissosity. Tonalitic gneiss is light to medium grey, fine to medium grained and foliated. It shows partial recrystallization textures and more or less well-defined banding. This banding is commonly accentuated by the presence of granitic injections subconformable to gneissosity. Gneiss contains 8-20% ferromagnesian minerals, mainly brown biotite, and varying proportions of amphiboles (green hornblende or actinolite) depending on bands, producing strong foliation. Unit Aung2 gneiss may contain up to 5% K-feldspar. The main accessory minerals are, in order of importance, apatite, epidote, opaque minerals, zircon (as inclusions in biotite), sphene, muscovite, chlorite, allanite and rutile. 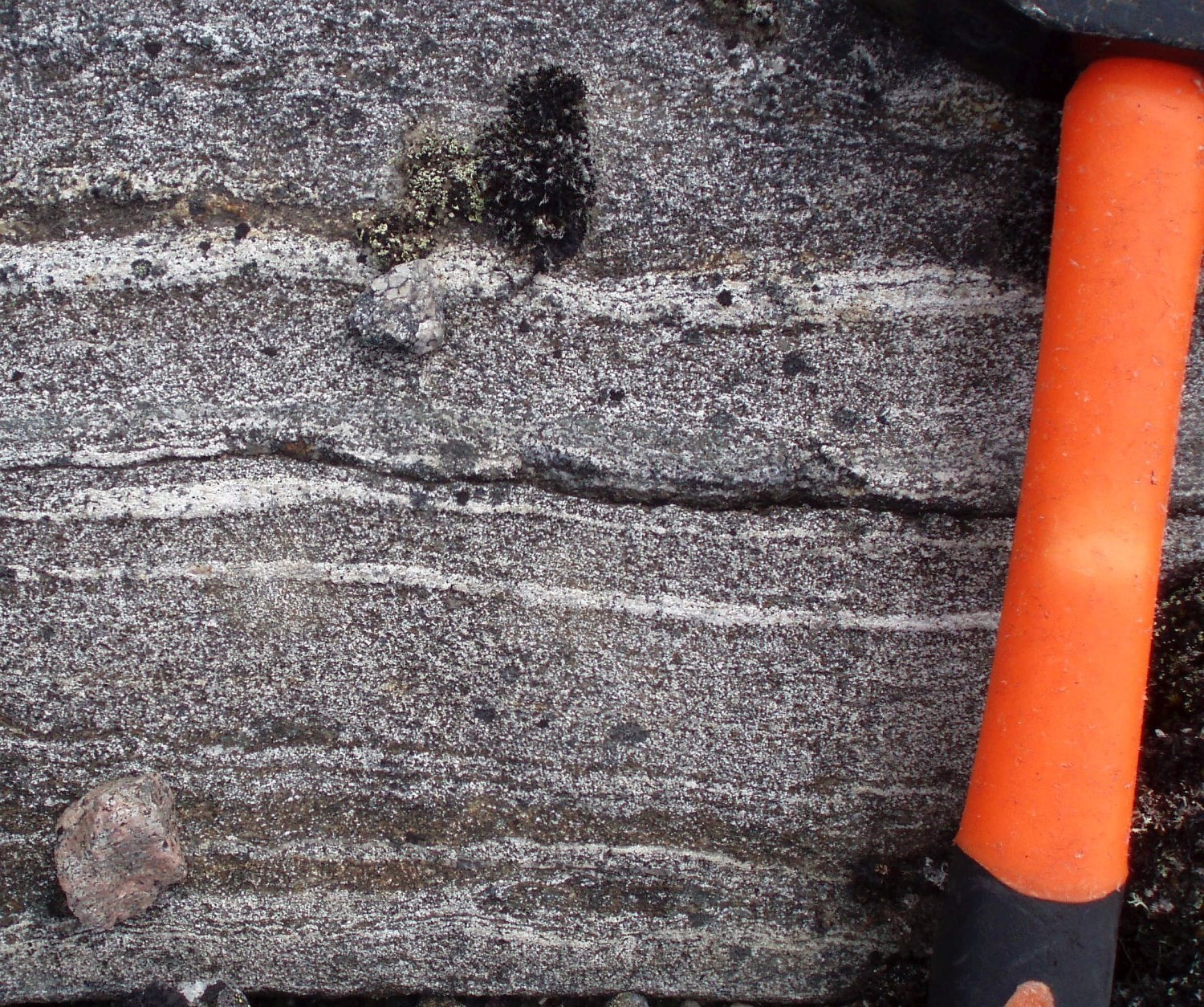 Darker-coloured gneissic rocks with composition varying from diorite to quartz diorite have been assigned to subunit Aung2a. This unit forms thin klippes <2 km wide inside other gneiss units of the Ungava Complex. It also occurs as centimetric to metric layers inside unit Aung2 tonalitic gneiss. The rock is characterized by alternating millimetric to decimetric bands of diorite, quartz diorite and tonalitic whitish leucosome (10-25%). Some decimetric layers show evidence of higher partial melting. Ferromagnesian minerals are the same as in unit Aung2, but in larger proportions (15-35%), particularly hornblende. Clinopyroxene occurs locally and is replaced by hornblende in some places. Textures and accessory minerals observed in thin sections are similar to those of unit Aung2. 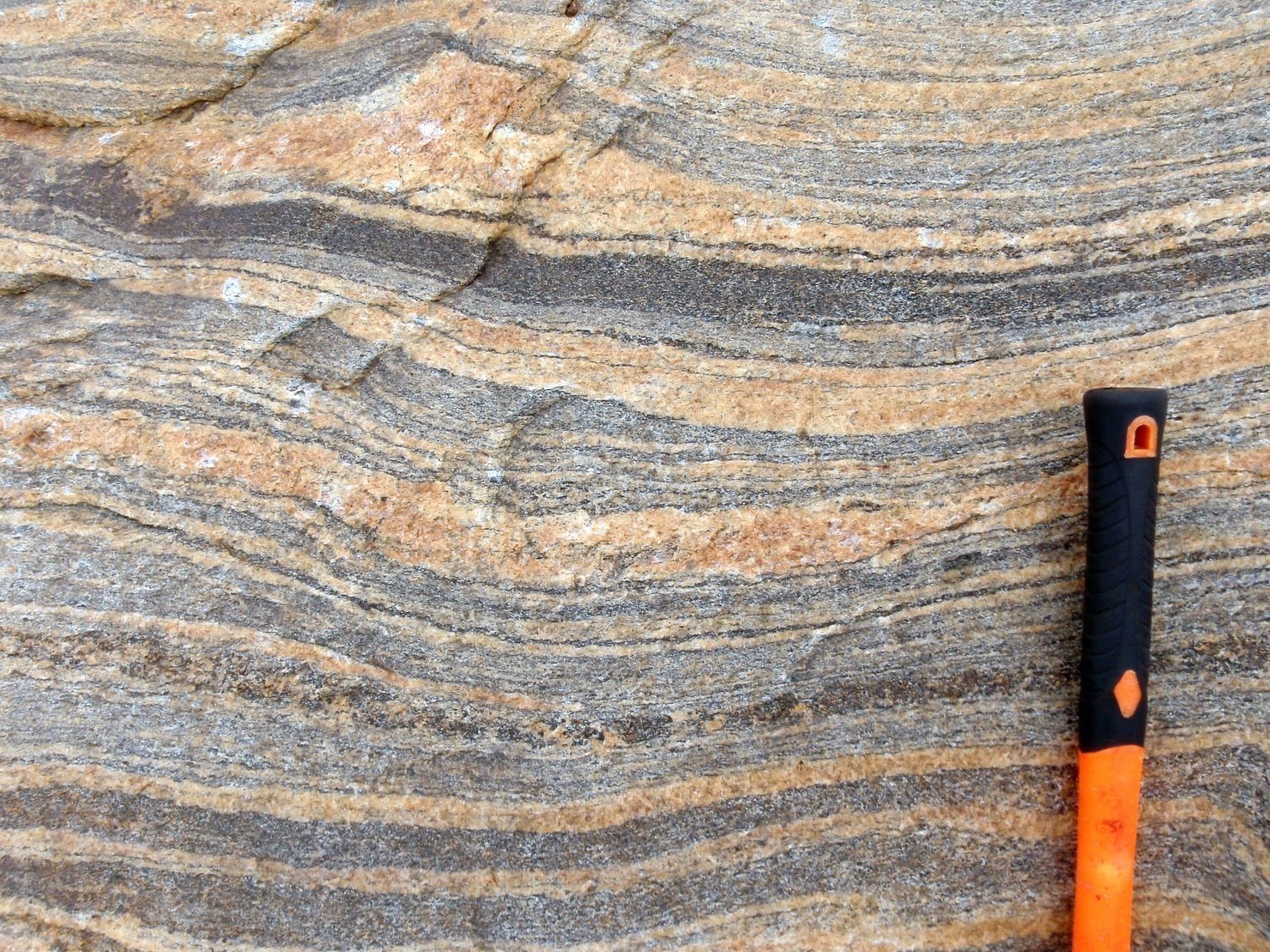 Unit Aung3 consists of tonalitic gneiss similar to that of unit Aung2, but distinguished by the presence of 25% to 40% millimetric to centimetric bands of pink granite parallel to gneissosity. These bands are fine to medium grained, partially recrystallized and have undergone the same deformation as the tonalitic portion of gneiss. Simard et al. (2013) interpreted this unit as areas where Archean tonalites were cut by pre-tectonic granite dykes. These two phases would later have been deformed, folded, and paralleled during deformation and metamorphism. In the vicinity of the De Pas Supersuite, some granitic bands are coarser grained and in positive relief on outcrops. It is likely that most of these bands are injections associated with the De Pas Granitic Suite (Lafrance et al., 2014). 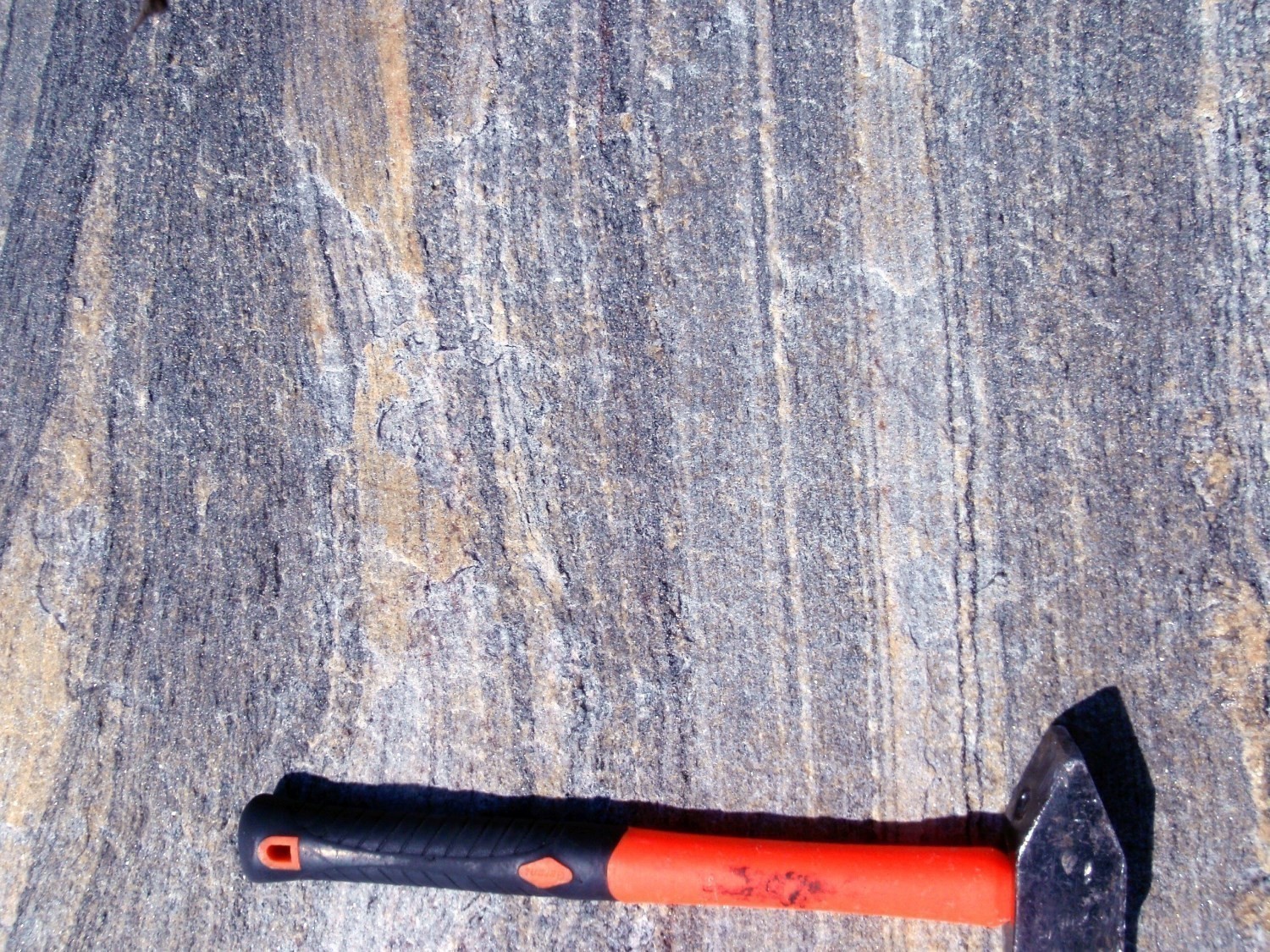 In the field, unit Aung4 granitic gneiss is similar to the tonalitic portion of other units (Aung2 and Aung3). It is light to medium grey and contains whitish and pinkish bands conformable to gneissosity. Thin sections and stainings indicated high proportions of K-feldspar (25-45%) and generally lower proportions of ferromagnesian minerals (5-15%), which consist of biotite flakes aligned with foliation. Biotite contains zircon inclusions and is locally associated with low amounts of hornblende. Accessory minerals are sparse and include allanite, apatite, opaque minerals, muscovite, epidote, sphene, chlorite and rutile. In the Kuujjuaq and Ungava Bay area, unit Aung4 granitic gneiss corresponds to “microcline gneiss” identified in the north-central part of sheet 24K by Sauvé (1957, 1959).

Subunit Aung4a consists of augen gneiss and microcline-quartz-plagioclase-biotite gneiss. Augen gneiss is composed of ovoid microcline ~1 cm in diameter in a fine-grained matrix consisting of a quartz-plagioclase-hornblende-biotite assemblage. These gneiss are interstratified with subunit Aung4b gneiss. The information available for subunits Aung4a and Aung4b is very limited, as they were not observed in recent mapping.

Subunit Aung4b is a siliceous granitic gneiss that is variously migmatized and whose protolith is probably sedimentary in origin (Gold, 1962). It also includes gneiss previously assigned to the Ballantyne Complex by Simard et al. (2013). Gneiss is grey or pink and banded. It is composed of microcline, quartz and plagioclase with minor amounts of biotite and muscovite. It locally contains well-defined quartz laminae or bands.

The Ungava Complex covers an area of 6298 km2 within the Baleine Lithotectonic Domain. Units Aung2 (2920 km2), Aung4 (756 km2) and Aung2a (334 km2) are observed throughout the domain, while units Aung1 (197 km2), Aung3 (237 km2), Aung4a (43 km2) and Aung4b (1773 km2) are limited to the northern end of the Baleine Domain in the Kuujuaq and Hopes Advance Bay areas. It is possible that the exceptional quality of the outcrops along Ungava Bay allowed for better differentiation of gneiss units in this area. However, non-mappable layers at scale 1:250 000 have been observed elsewhere in other units of the Ungava Complex. Subunit Aung2a commonly occurs as decimetric to kilometric klippes in unit Aung2.

Dating on several gneiss samples have yielded Archean crystallization ages and Paleoproterozoic metamorphic ages. The large spread of Archean ages (2.95-2.65 Ga) indicates a complex geological evolution. Paleoproterozoic ages obtained (1864-1786 Ma) also correspond to the migmatization of paragneiss and diatexites of the False and Winnie suites, and the emplacement of the majority of intrusive units within the Baleine Domain (Champdoré, Aveneau, Lhande and Dancelou suites, Kuujuaq Pluton, Kaslac Complex and De Pas Supersuite).