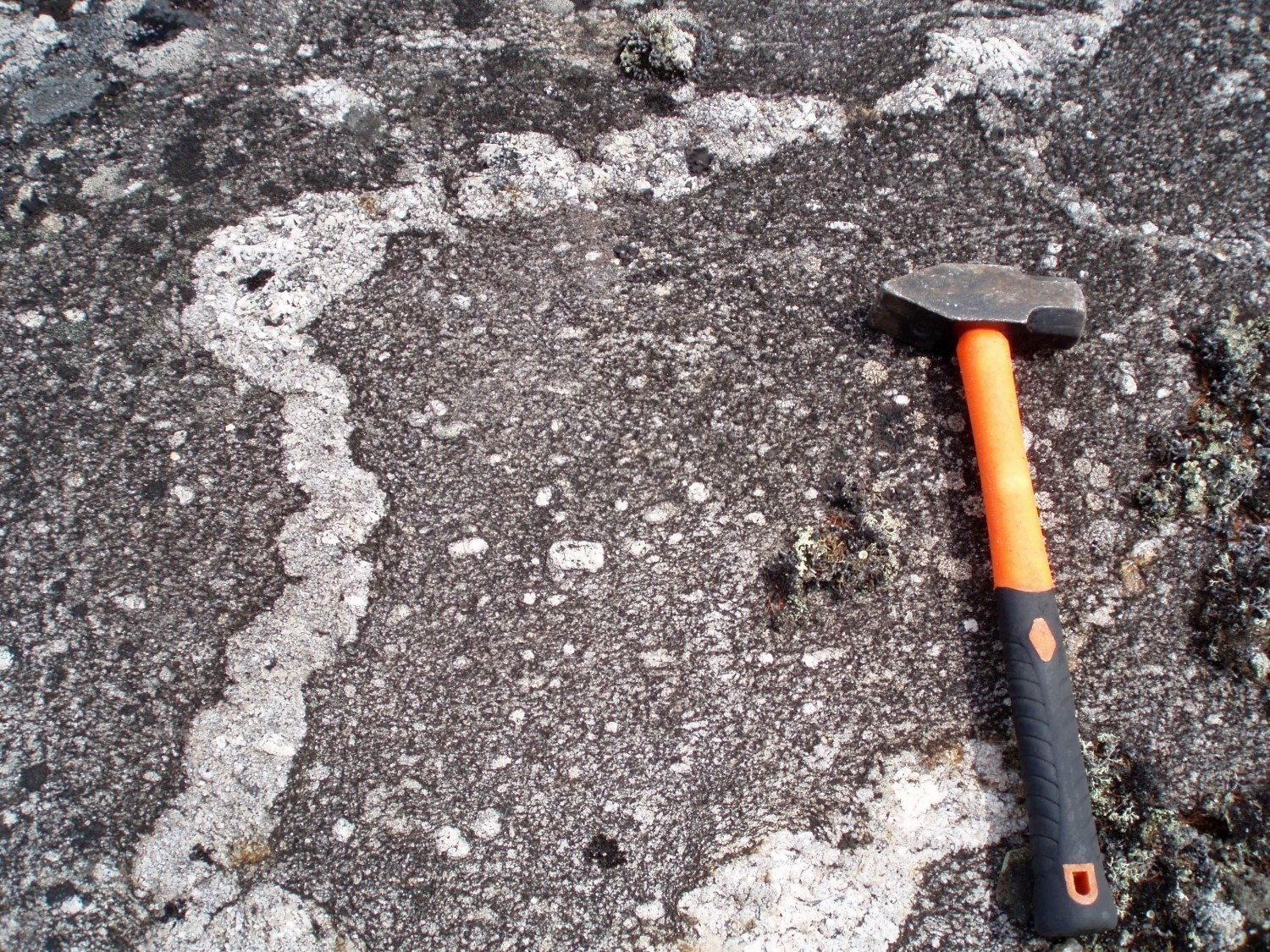 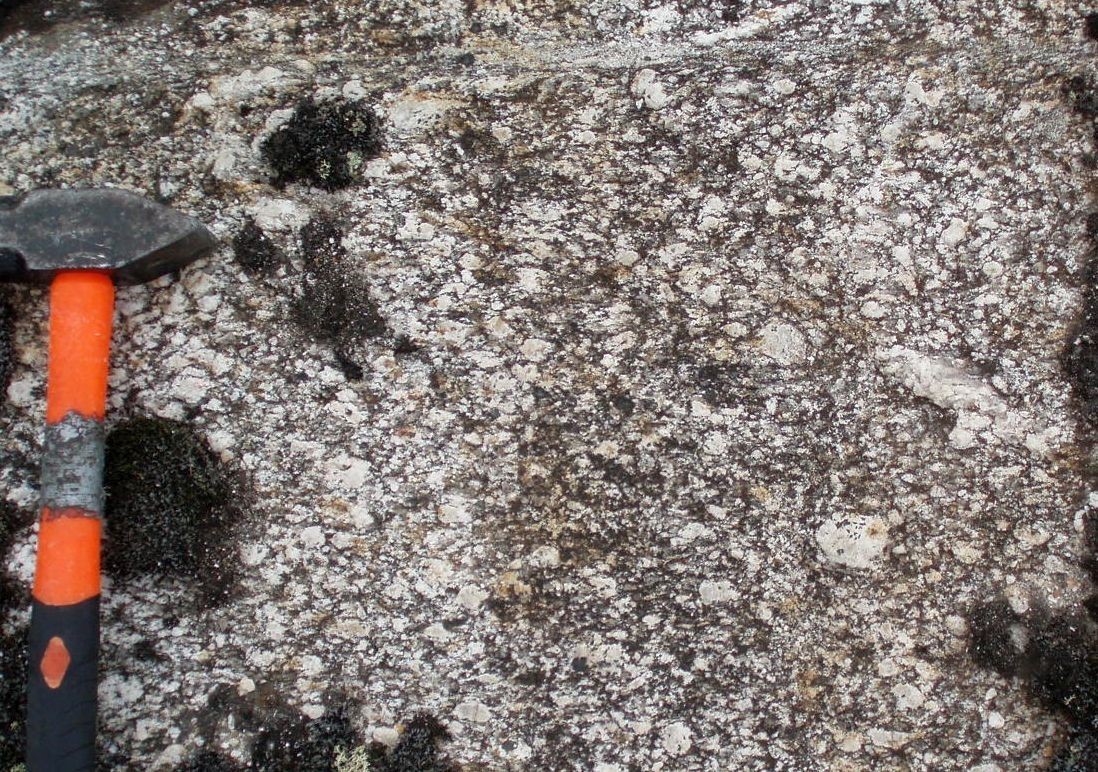 Homogeneous diatexite has a composition that varies from granodiorite to quartz monzonite. It is characterized by a heterogranular texture, a yellowish to brownish altered surface and the presence of 15-30% microcline and plagioclase phenocrystals 1-4 cm. Phenocrystals are roughly aligned along foliation and show a heterogeneous distribution. They contain many rounded inclusions of quartz and plagioclase. Ferromagnesian minerals (15-30%), which consist mainly of brown to red biotite and local hornblende (<10%), form clusters around silicate minerals. Accessory phases are abundant and generally associated with biotite; the most common are sphene, apatite, opaque minerals and zircon with lesser amounts of allanite, epidote, garnet, chlorite, muscovite and carbonate. In thin sections, grain edges are usually corroded and fractures are filled with yellowish iron oxides. The degree of recrystallization varies for the same sample, from low to high. In places, coarser grains are surrounded by a granoblastic rim. Quartz forms anhedral zones with high undulatory extinction. Intergrowth textures, myrmekites and anti-perthites are common. Locally, the rock and phenocrystals are completely recrystallized. 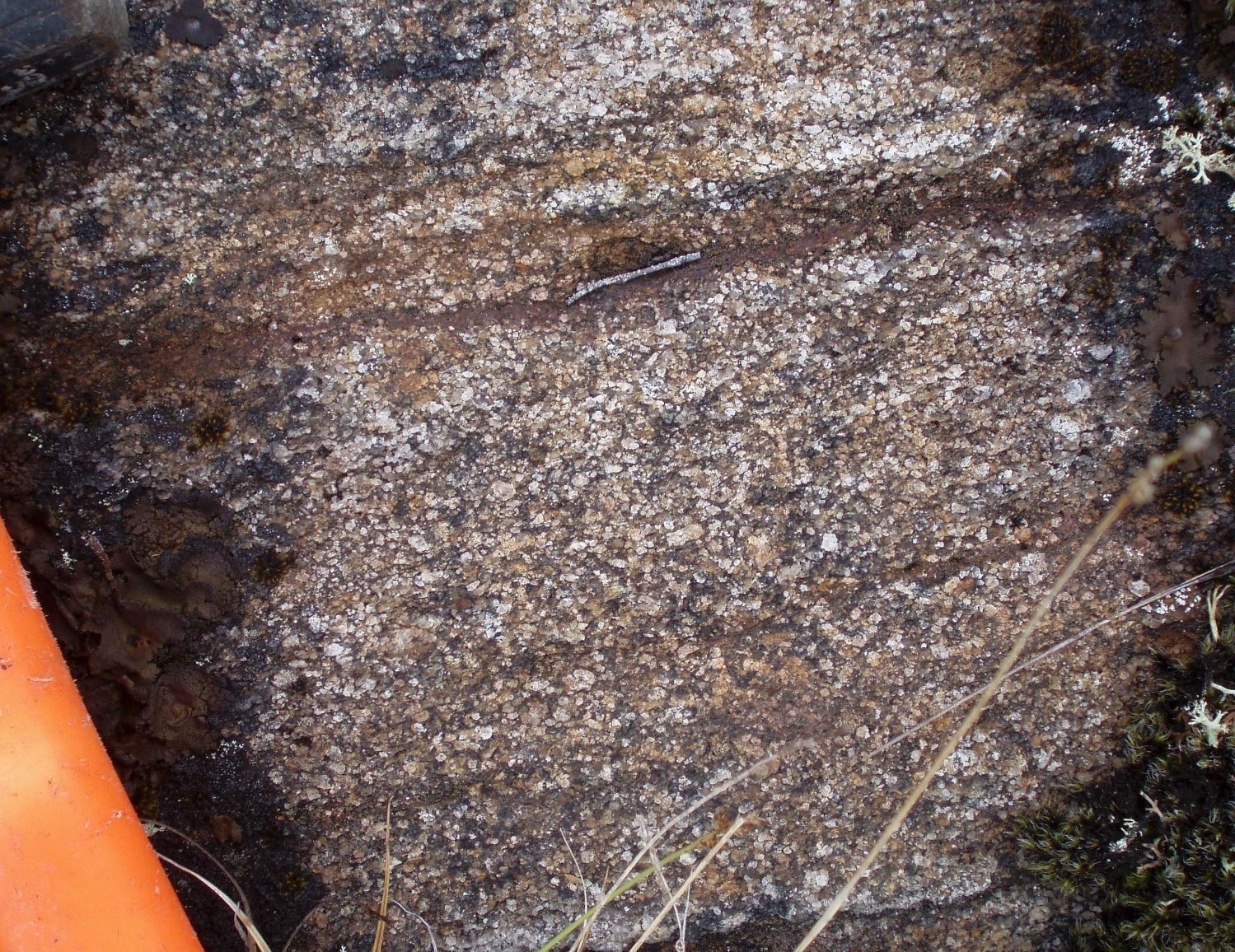 Subunit pPwii1a  corresponds to a homogeneous diatexite facies free of phenocrystals and whose composition is similar to tonalite or quartz diorite. Diatexites and porphyraceous diatexites are regularly on the same outcrops, making it difficult to distinguish between the two subunits. 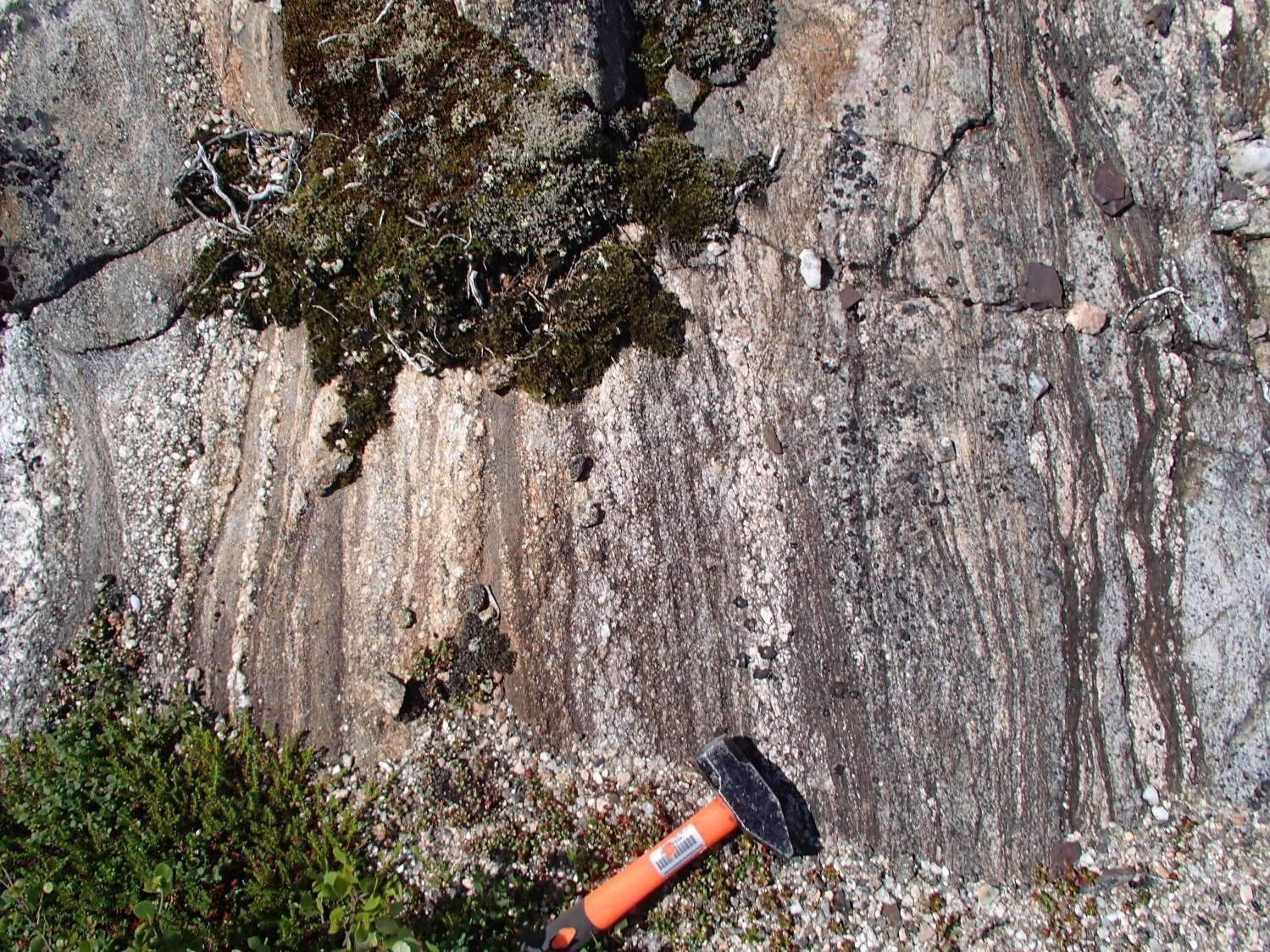 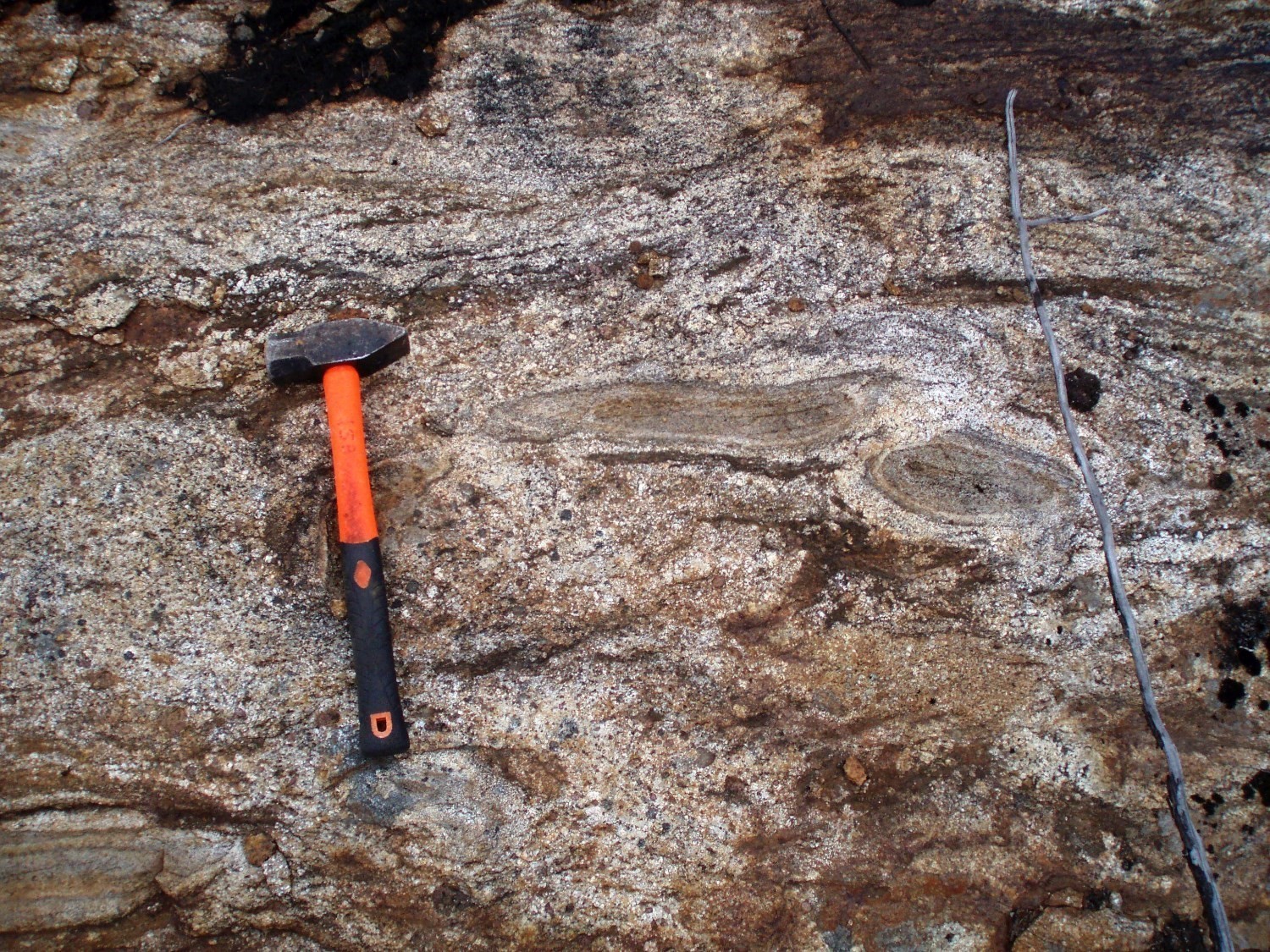 Unit pPwii2 consists of diatexite and stromatic metatexite containing 35-70% tonalitic to granitic leucosome and 30-60% migmatitic paragneiss of the False Suite (pPfas1) as elongated centimetric to decimetric rafts or preserved decimetre to decametre-wide layers. The whole forms a heterogeneous package displaying irregular, discontinuous and often chaotic migmatitic banding. Diatexite also contains numerous biotite schlierens, which in some areas are the only remnants of the melted material. Diatexite is greyish in fresh exposure and brownish to rusty in altered surface. It contains 20-30% ferromagnesian minerals, mostly brown to red biotite generally concentrated in schlierens and locally associated with hornblende (<5%). Accessory minerals are varied but less abundant than in homogeneous diatexite of unit pPwii1; there is zircon as inclusions in biotite, muscovite, garnet, opaque minerals, graphite, chlorite, apatite and kyanite. In thin sections, unit pPwii2 diatexite has the same textural characteristics as unit pPwii1. In some locations, metric layers of porphyraceous diatexite (pPwii1) were observed in the unit of diatexite and stromatic metatexite. 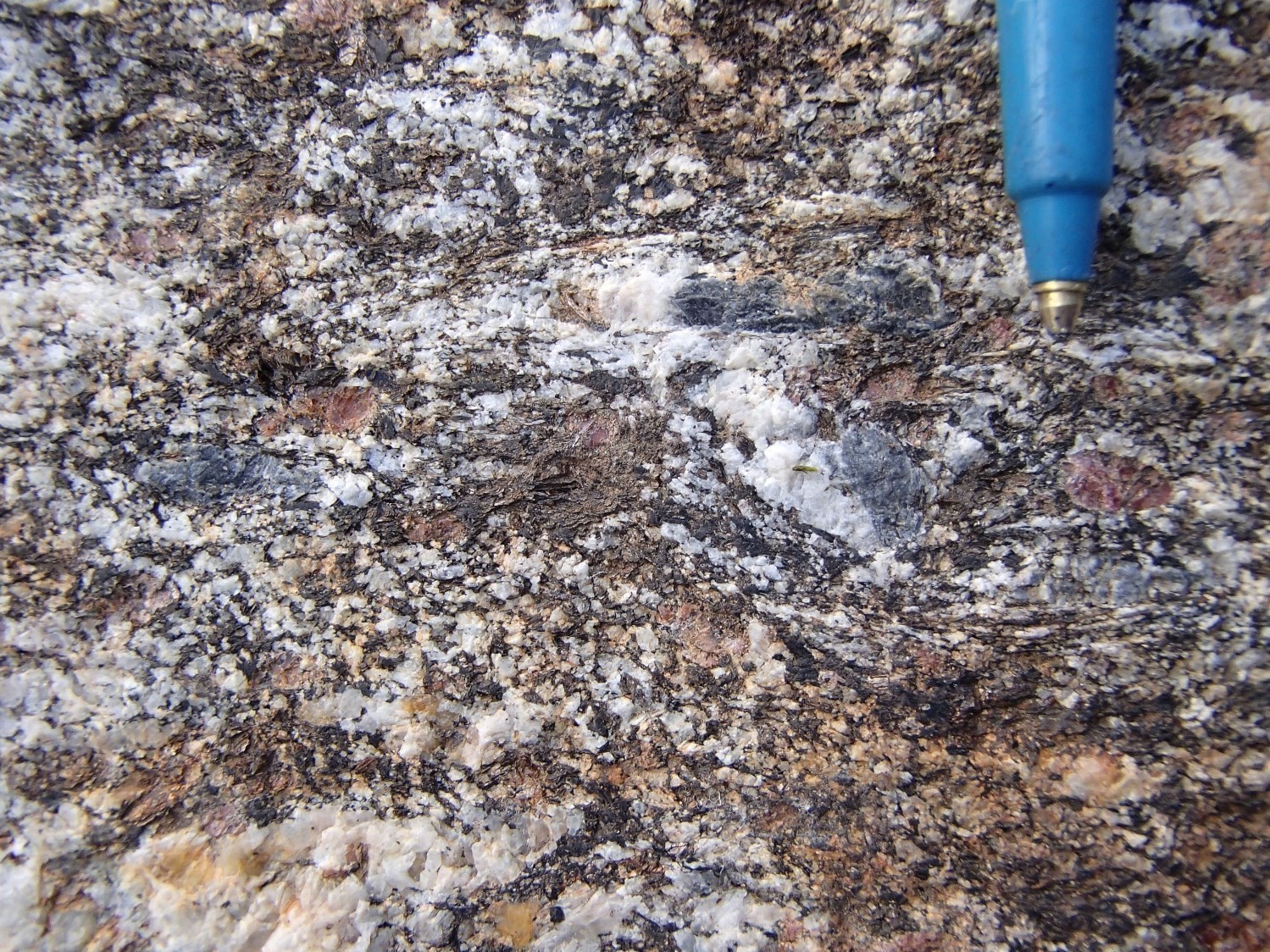 Migmatites of the Winnie Suite and metasedimentary rocks of the False Suite are concentrated in the central part of the Baleine Lithotectonic Domain. With an area of ~4070 km2, the Winnie Suite is a dominant unit in this domain. Units pPwii2 (1794 km2) and pPwii1 (1453 km2) are the most common, while subunits pPwii2a (760 km2) and pPwii1a (63 km2) are more restricted.

The Paleoproterozoic age of ~1838 Ma obtained on diatexite samples (outcrops 2012-IL-3048 and 2015-LP-2117) represents the crystallization age of anatectic liquid. Older ages come from zircon nuclei and are mostly at ~1978 Ma and ~2836 Ma (Davis et al., 2015). According to the authors, diatexite clearly originated from a Paleoproterozoic episode of melting Proterozoic and Archean rocks. A crystallization age of anatectic liquid of ~1807 Ma (Godet et al., 2020) was also obtained in a migmatized paragneiss of the False Suite.

The major melting event that affected paragneiss of the False Suite produced a significant proportion of diatexite and metatexite assigned to the Winnie Suite. In the Saffray Lake area (Lafrance et al., 2014), E-W magnetic anomalies characterizing Archean potassic intrusions of the Saffray Suite continue in the western portion of the Baleine Domain, but with slightly less intensity. These observations suggest that the migmatitic metasedimentary rock cover is relatively thin over Archean bedrock. The presence of migmatitic rocks of the False and Winnie suites between Archean intrusions of the Saffray Suite also indicates that the Paleoproterozoic sedimentary rock cover was buried with gneissic bedrock during Paleoproterozoic collision events. 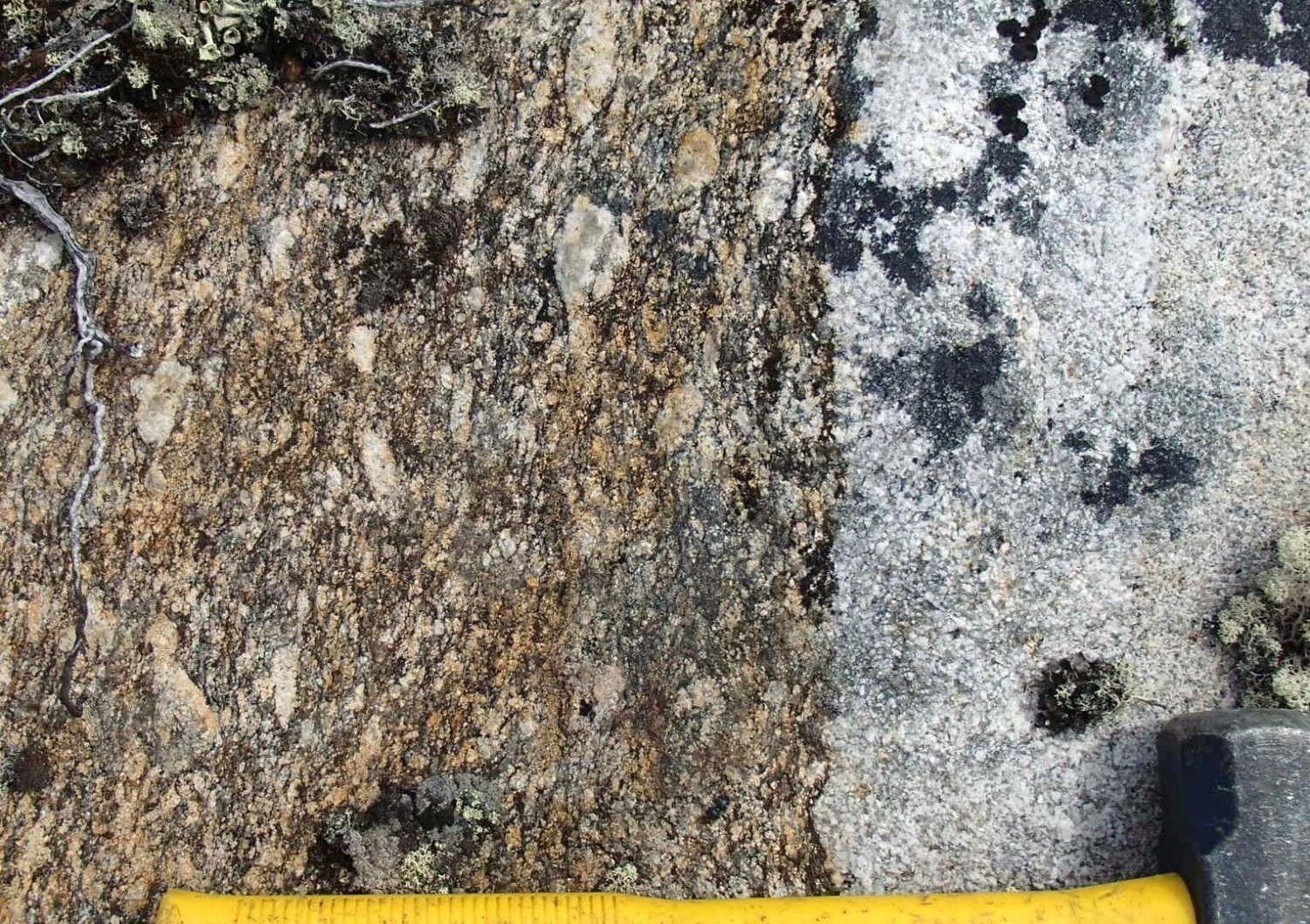 Diatexites and metatexites of the Winnie Suite contain paragneiss rafts and layers of the False Suite. They are cut by whitish intrusions of the Aveneau Suite, which regularly form decimetric to decametric sills, as well as by late granites of the Dancelou Suite.