The « Rivière False Suite » was defined by Lafrance et al. (2014) to group migmatized metasedimentary rocks of the Baleine Domain. This unit is associated with diatexites of the Winnie Suite, but does not include little or not migmatized metasedimentary rocks of the Akiasirviup Suite. Charette et al. (2016)  followed this unit southward in the Jeannin Lake and Resolute Lake areas and renamed it “False Suite” to comply with the North American Stratigraphic Code (NACSN, 1983, 2005). It has also been identified in the southern part of the Kuujjuaq and Ungava Bay area by Simard et al. (2013), and in the SW part of the Brisson Lake area (Lafrance et al., 2016). 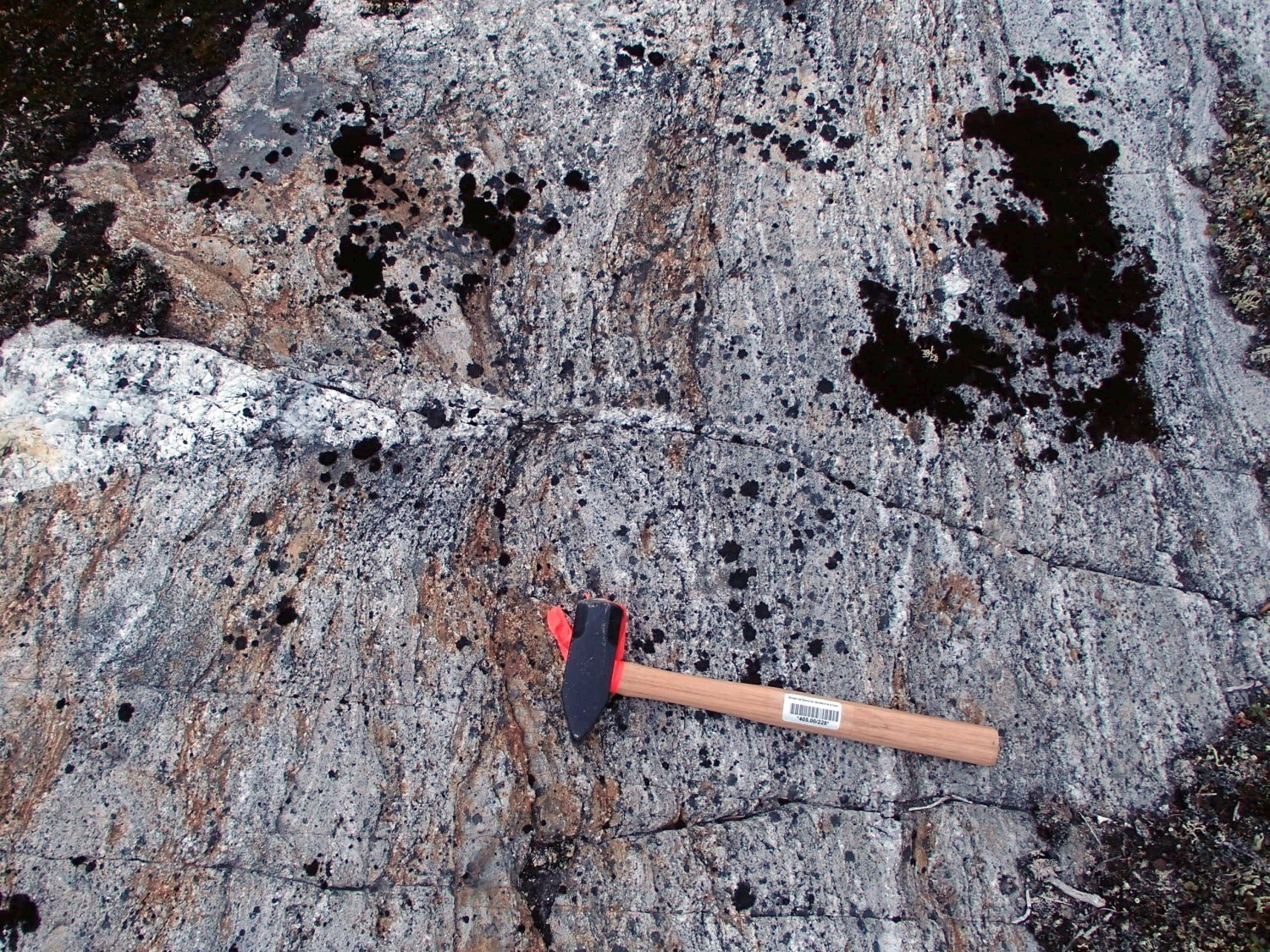 Paragneiss is characterized by 15-35% discontinuous, millimetre to centimetre-wide, whitish mobilisate usually tonalitic in composition. Banding is also caused by alternating bands containing varying amounts of ferromagnesian minerals (10-30%). The rock is grey in fresh exposure and brownish in altered patina. It is fine to medium grained and has a well-developed granoblastic texture. Paragneiss is generally poor in microcline and contains a very variable amount of quartz (10-35%).

Ferromagnesian minerals include brown to red biotite flakes well aligned or in millimetric clusters locally associated with hornblende. However, some beds or bands may contain up to 15% hornblende. Accessory minerals are generally abundant and accompanied by ferromagnesian minerals. Apatite, zircon (inclusions in biotite), opaque minerals and allanite are ubiquitous. Muscovite is not ubiquitous, but can represent up to 15% of the rock (typically <5%). At least two generations of muscovite are observed, one parallel to foliation and the other cutting it. Other accessory minerals observed are sphene, chlorite, epidote, garnet and sillimanite. Sillimanite occurs as fibrolite or prismatic crystals commonly found in garnet inclusions or arranged in biotite cleavage planes. Millimetric garnet grains contain plagioclase, quartz and mica inclusions. Within and along garnet crystal edges, biotite is generally completely chloritized.

In deformation zones, the rock is schistose and consists of granoblastic plagioclase-quartz lenses circumvented by micas, and deformation micro-corridors forming an anastomosed texture. Locally, a few non-migmatized paragneiss outcrops rich in microcline (20-35%) and poorer in ferromagnesian minerals (meta-arkose) have also been assigned to the False Suite. 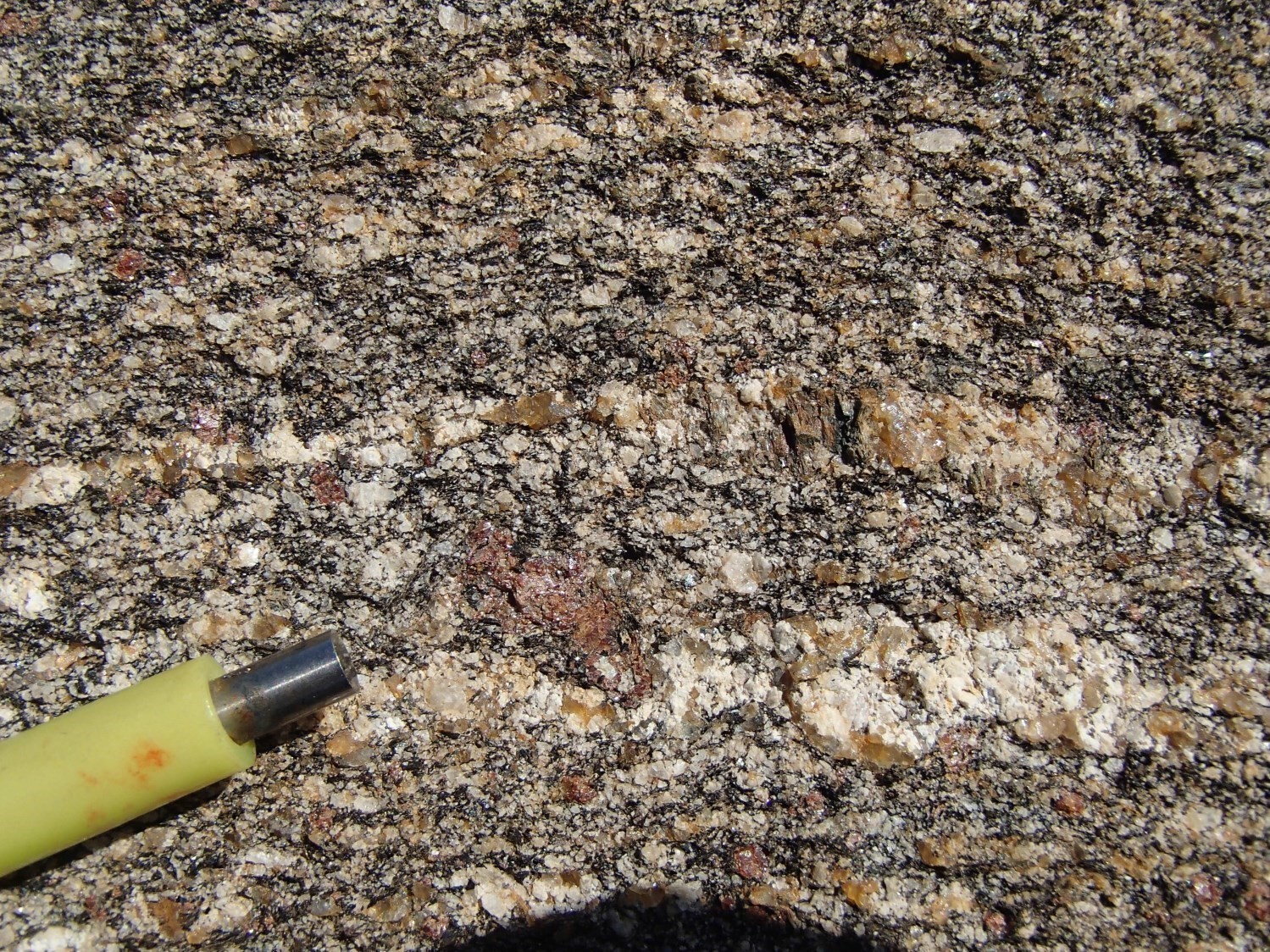 Unit nAfas1a occurs in areas where  paragneiss and mobilisate contain >5% pink or red garnet, in disseminated millimetric grains, in centimetric clusters or as poikiloblasts. 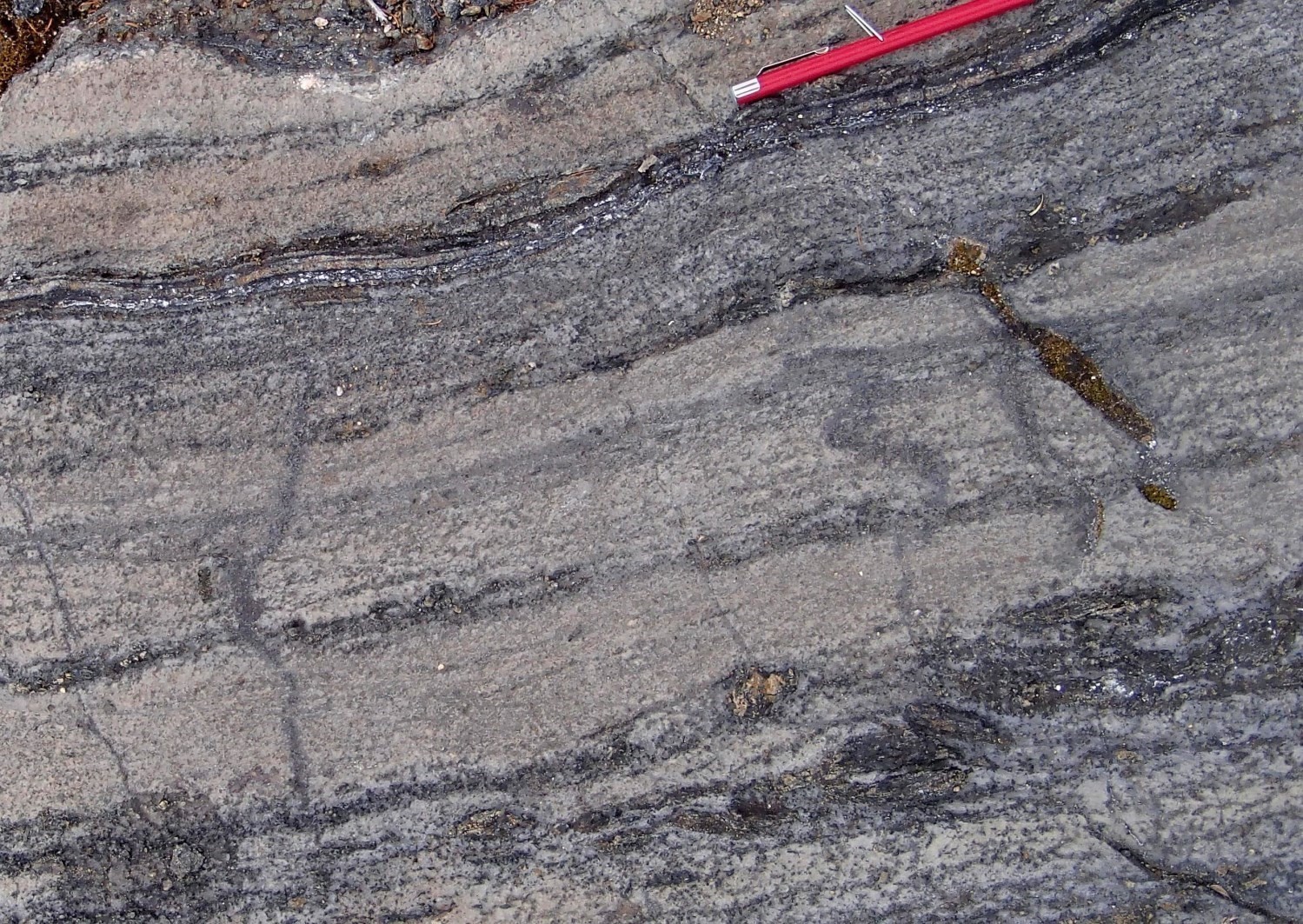 Calcosilicate rocks of the False Suite show different mineralogical assemblages. Most are granoblastic, banded and fine to medium grained. The main constituents are diopside, quartz, plagioclase and carbonate. More locally, the rock may also contain K-feldspar, hornblende, garnet, tremmolite, opaque minerals or discontinuous biotite laminae. In places, decimetric to metric beds of paragneiss and marble are interstratified in calcosilicate rocks. 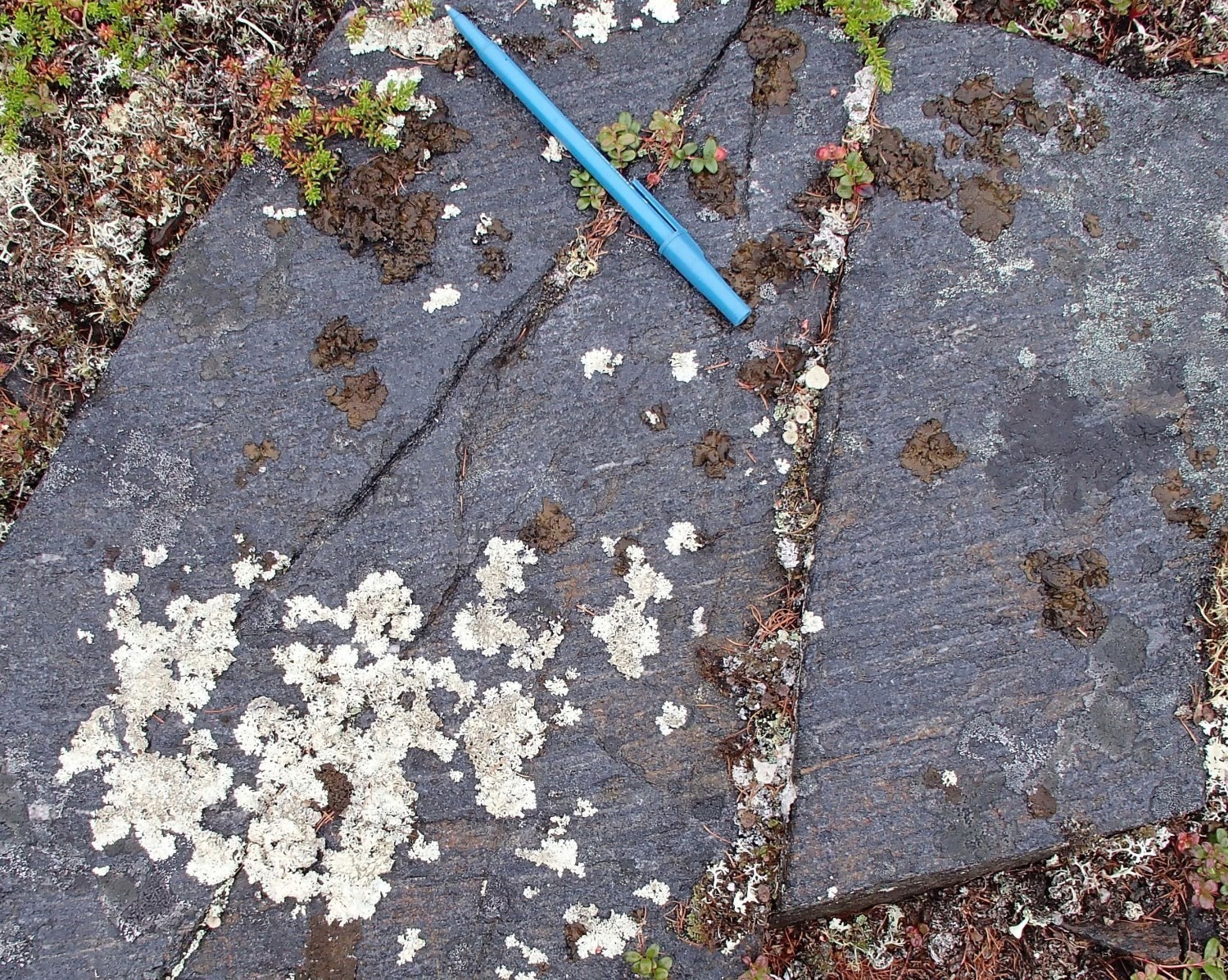 Iron formations of the False Suite are mainly oxide facies iron formations. The rock is banded, highly magnetic, fine to medium grained and very dark bluish grey. It consists of alternating millimetric to centimetric magnetite and quartz bands in equal proportion and contains clinopyroxene and sulphides locally. In the NE portion of the Jeannin Lake area, a silicate facies iron formation was also observed. The rock is banded and mainly composed of brown hornblende, garnet and quartz. It also contains smaller amounts of magnetite, plagioclase, apatite and hematite. 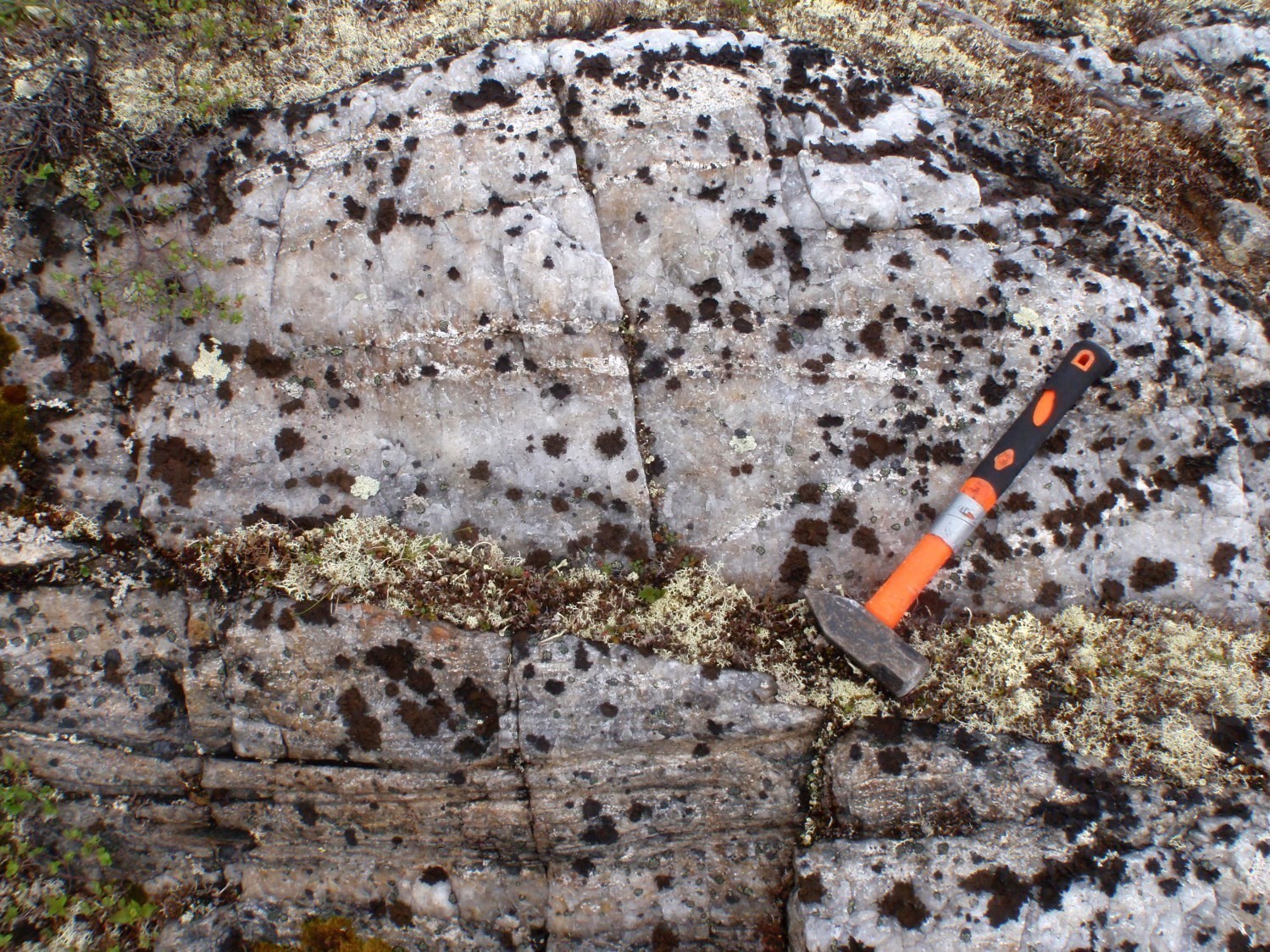 Quartzite is massive, fine grained and granoblastic. It is cut by 5-10% millimetric to centimetric quartz veins, locally giving the rock a  brecciated appearance. It contains some feldspar or disseminated sulphides locally.

Migmatites of the Winnie Suite and metasedimentary rocks of the False Suite are concentrated in the central part of the Baleine Lithotectonic Domain. With an area of ~4446 km2, the False Suite is one of the dominant units of this domain. Units nAfas1 (3952 km2) and nAfas1a (454 km2) are most widespread, while units nAfas2 (28 km2), nAfas3 (2 km2) and nAfas4 (10 km2) are much smaller and form only hectometric to kilometric klippes within the Baleine Domain.

A sample of migmatized biotite-sillimanite-garnet paragneiss (15-BC-6130A) yielded detrital U-Pb ages on zircons ranging from 3335 Ma to 2678 Ma (Godet et al., 2020). This age distribution indicates that sediments originate from erosion of Archean rocks of the Baleine Lithotectonic Domain. The Lu-Hf age of garnet around 1959 Ma allows to estimate the age of metamorphism. Crystallization of the anatectic liquid at 1807 Ma is indicated by the U-Pb metamorphic age of zircons. The U-Pb age of rutile at ~1798 Ma demonstrates rapid cooling after the metamorphic peak (Godet et al., 2020).

The major partial melting event that affected paragneiss of the False Suite was responsible for the formation of the large diatexite unit assigned to the Winnie Suite. Rocks of the False Suite form decimetric to decametric rafts within Winnie Suite diatexites. Contact between the False and Winnie suites is gradual. Thus, although the deposition age of metasediments is Neoarchean, their migmatization leading to the formation of diatexites of the Winnie Suite took place in the Paleoproteozoic. Paragneiss are also intruded by many whitish dykes, decimetre to metre-wide, which are likely associated with intrusions of the Aveneau Suite interpreted as evolved products resulting from the anatexic process. They are also cut by granitic intrusions of the Dancelou Suite.