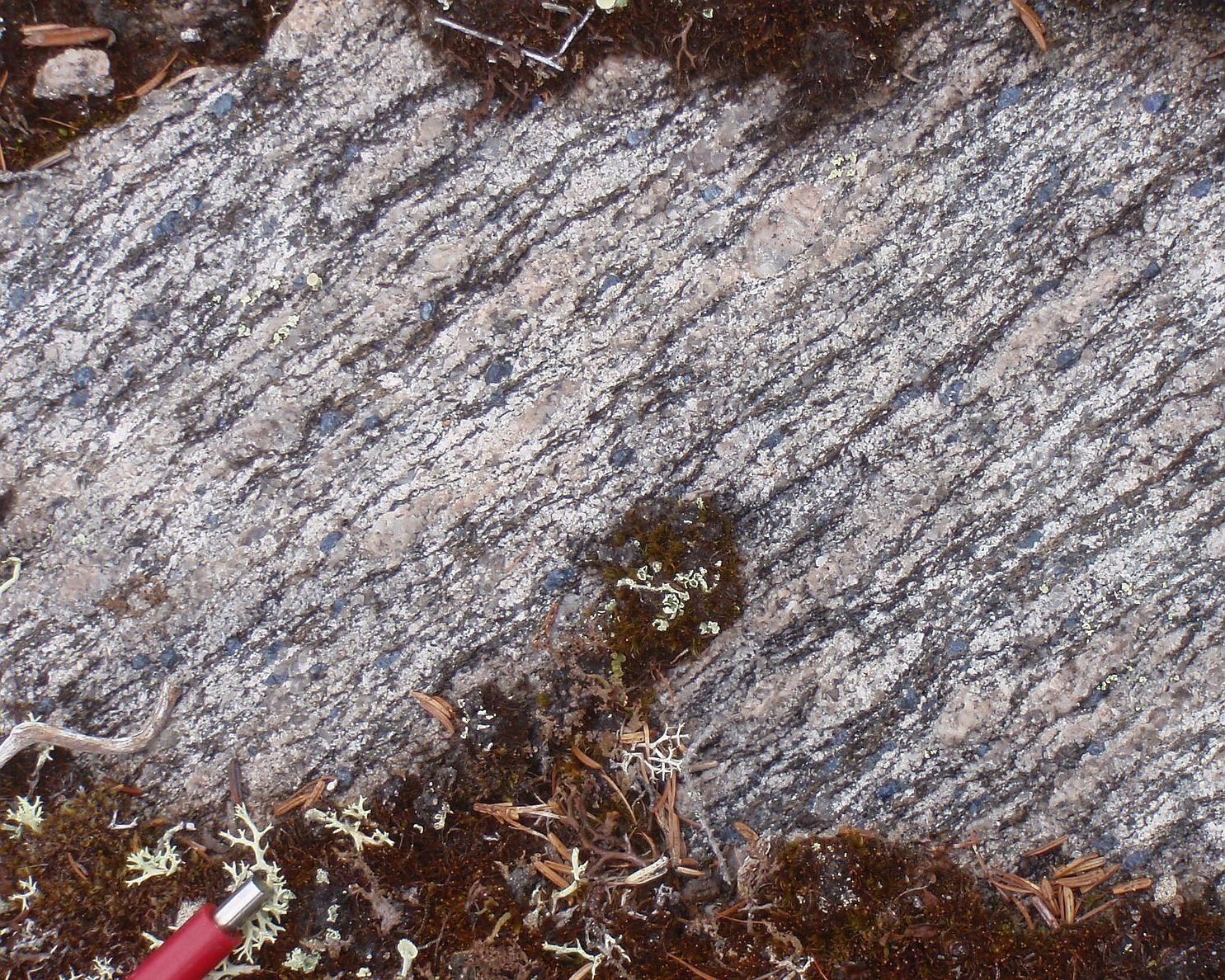 Unit nAsaf1 consists mainly of quartz monzonite associated with lower amounts of granodiorite, quartz monzodiorite and monzogranite. It is fine to medium grained, granoblastic and foliated. K-feldspar occurs as lenticular bands and porphyroclasts. The rock is pinkish to yellowish grey and commonly gneissic. It contains 15-30% ferromagnesian minerals that form clusters and discontinuous millimetre to centimetre-wide bands. They consist of brown biotite and green hornblende accompanied locally by altered clinopyroxene. These commonly show intergrowth textures with lower temperature minerals. Accessory minerals are abundant (2-10%) and consist of magnetite, sphene, apatite, epidote, allanite, chlorite and zircon with, more locally, carbonates and muscovite. On outcrops, these rocks are injected with magnetic pink granite similar to that of unit nAsaf2. These millimetric to metric injections are generally discontinuous, boudinaged and conformable to foliation. Unit nAsaf1 rocks also contain centimetric to metric enclaves of fine-grained granoblastic and highly magnetic gabbronorite and gabbro. These mafic rocks locally are the dominant lithology of the outcrop. 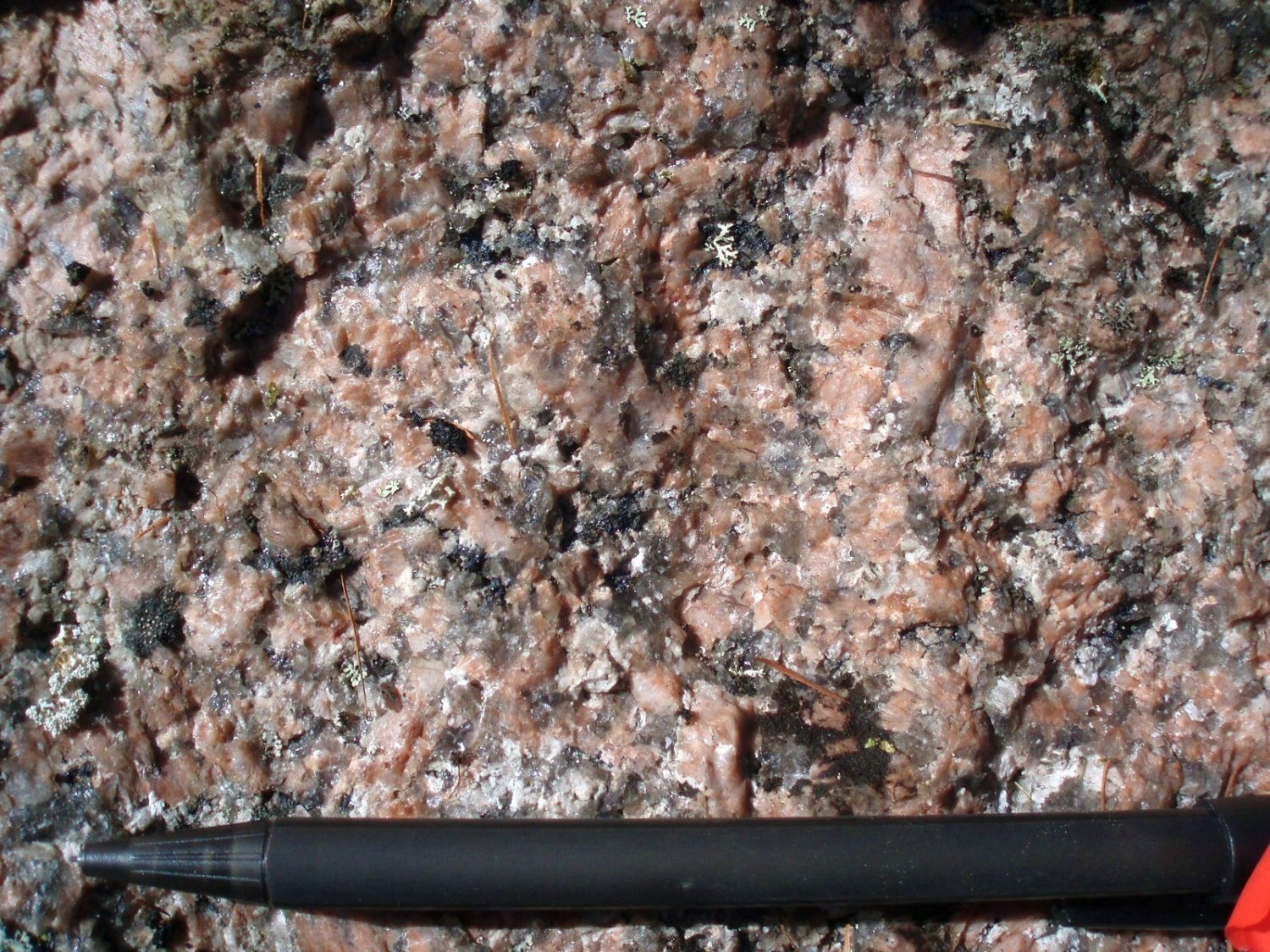 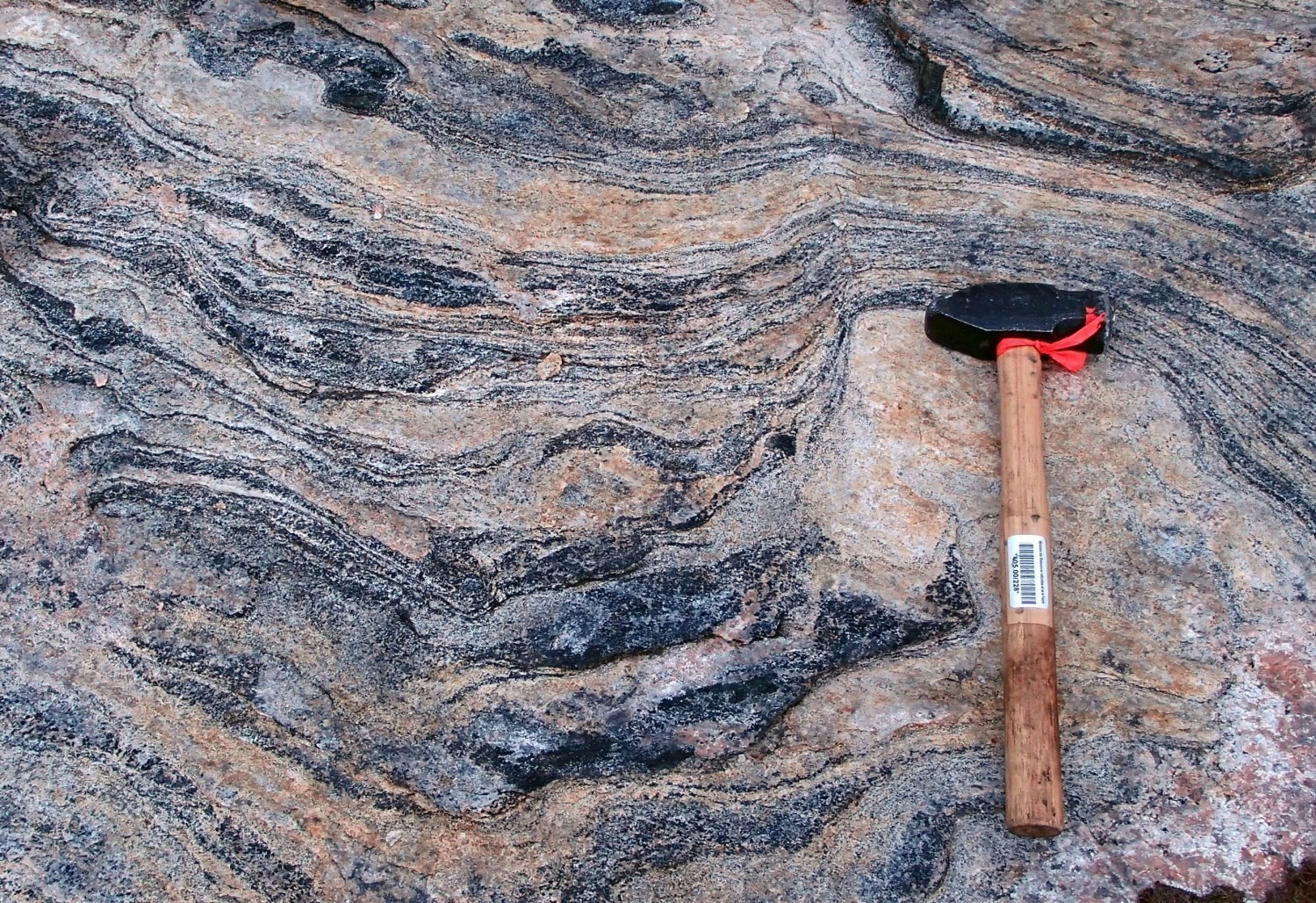 In the Saffray Lake area (Lafrance et al., 2014), tonalitic gneiss of the Ungava Complex (ApPung2) is injected with >50% magnetic granite similar to that of unit nAsaf2. These heterogeneous zones have been assigned to subunit nAsaf2a. Within it, granite occurs as centimetre to decimetre-wide injections parallel to gneissosity, accentuating banding. 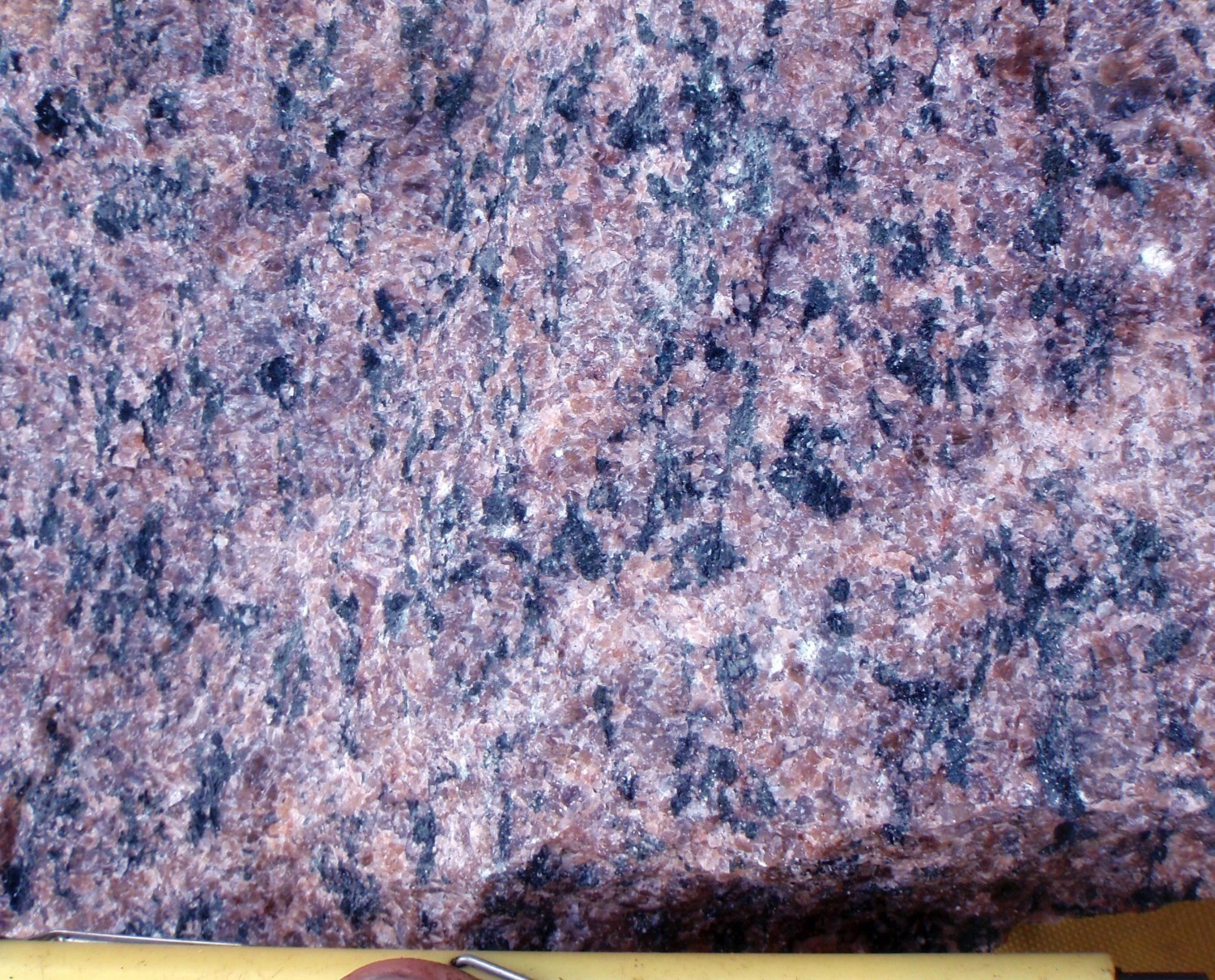 The Saffray Suite is an important unit within the Baleine lithotectonic domain, with an area of ~3151 km2, particularly in the Saffray Lake (Lafrance et al., 2014) and Jeannin Lake (Charette et al., 2016) areas. It is observed in a wide corridor oriented NW-SE to N-S directly west of the De Pas Supersuite. Informal unit nAsaf1 (2694 km2) is by far the most important, with units nAsaf2 (158 km2), nAsaf2a (293 km2) and nAsaf3 (6 km2) covering much smaller areas.

The presence of migmatitic rocks of the False and Winnie suites between intrusions of the Saffray Suite within the Baleine Domain could indicate that the sedimentary cover overlaid the Saffray Suite before Paleoproterozoic deformation. Much of this coverage was eroded after this domain was thrusted to the west. Rocks of the Saffray Suite occur as enclaves in and are intruded by the majority of Paleoproterozoic intrusive units present in the Baleine Domain, especially those of the De Pas Supersuite and whitish intrusions of the Aveneau Suite. In the southern part of the Jeannin Lake area (Charette et al., 2016), potassic rocks of unit nAsaf1 are locally similar to some of the rocks assigned to the Champdoré Suite. However, the absence of a significant magnetic anomaly in this area and the respective dating in the two units indicate that they are indeed two distinct suites.