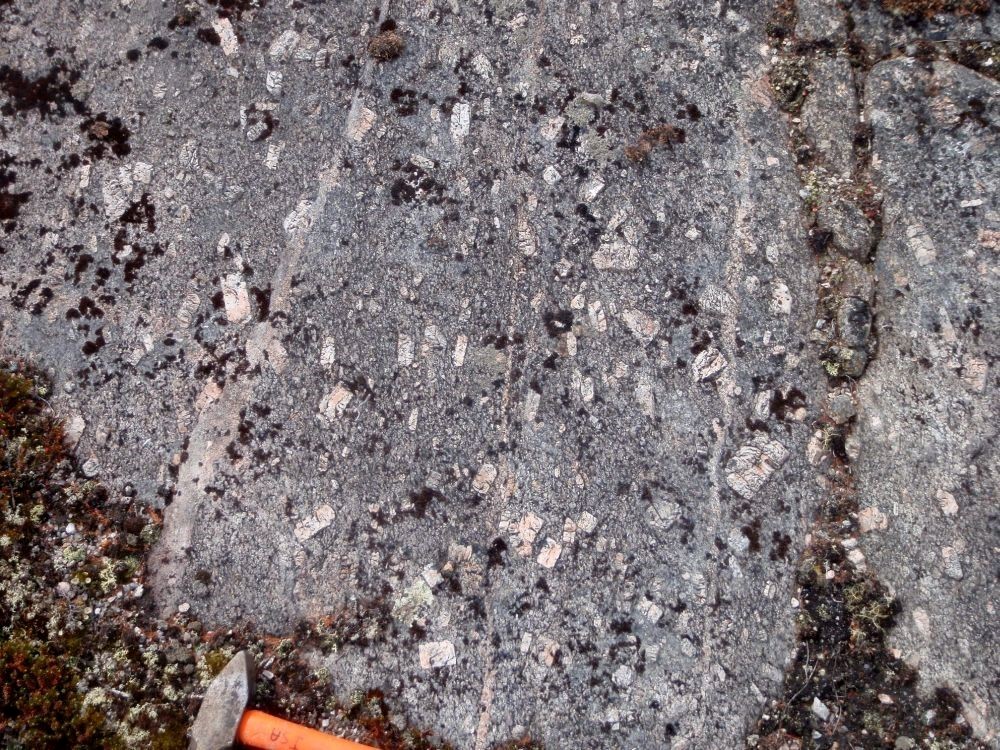 The De Pas Granitic Suite was defined by Danis (1991) and subdivided into informal units based on the dominant lithology. This suite, like the De Pas Charnockitic Suite, is part of the De Pas Supersuite, a polyphase syntectonic intrusion that extends >440 km in a N-S to NNW-SSE orientation in the George Lithotectonic Domain (Charette et al., 2018).

A regional compilation by geologists of the Ministère in 2003 (MRNF, 2010a-c) subdivided the De Pas Granitic Suite, then referred to as the “De Pas Batholith”, into six informal units (pPdep1 to pPdep6). Hammouche et al. (2011) subsequently redefined several units and introduced a seventh (pPdep7). Simard et al. (2013) introduced an eighth unit (pPdep8) of small syenite and monzonite intrusions. Only informal units pPdep3, pPdep4, pPdep5, pPdep7 and pPdep8 were recognized in the 1:250 000 mapping work conducted by the Ministère between 2011 and 2016. As part of the Southeastern Churchill Province regional synthesis (SECP; Lafrance et al., 2018), the eight known informal units were reduced to five (pPdep1 to pPdep5), as illustrated in the table below.

The De Pas Granitic Suite rocks are commonly affected by the Rivière George Shear Zone, resulting in the development of mylonitic foliation, K-feldspar porphyroclasts and quartz bands, accompanied by more or less intense hematite, epidote and chlorite alteration in platings and veinlets. 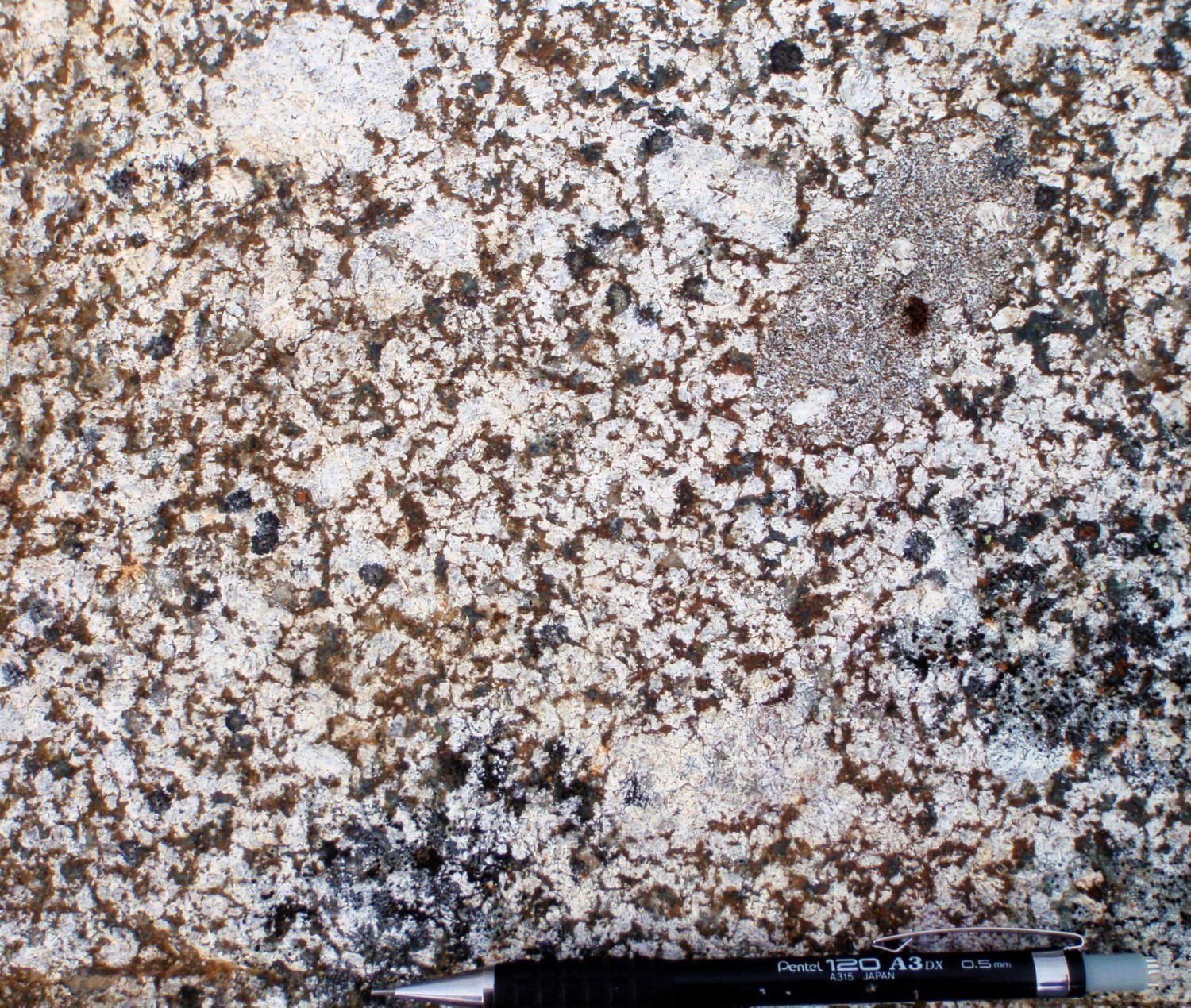 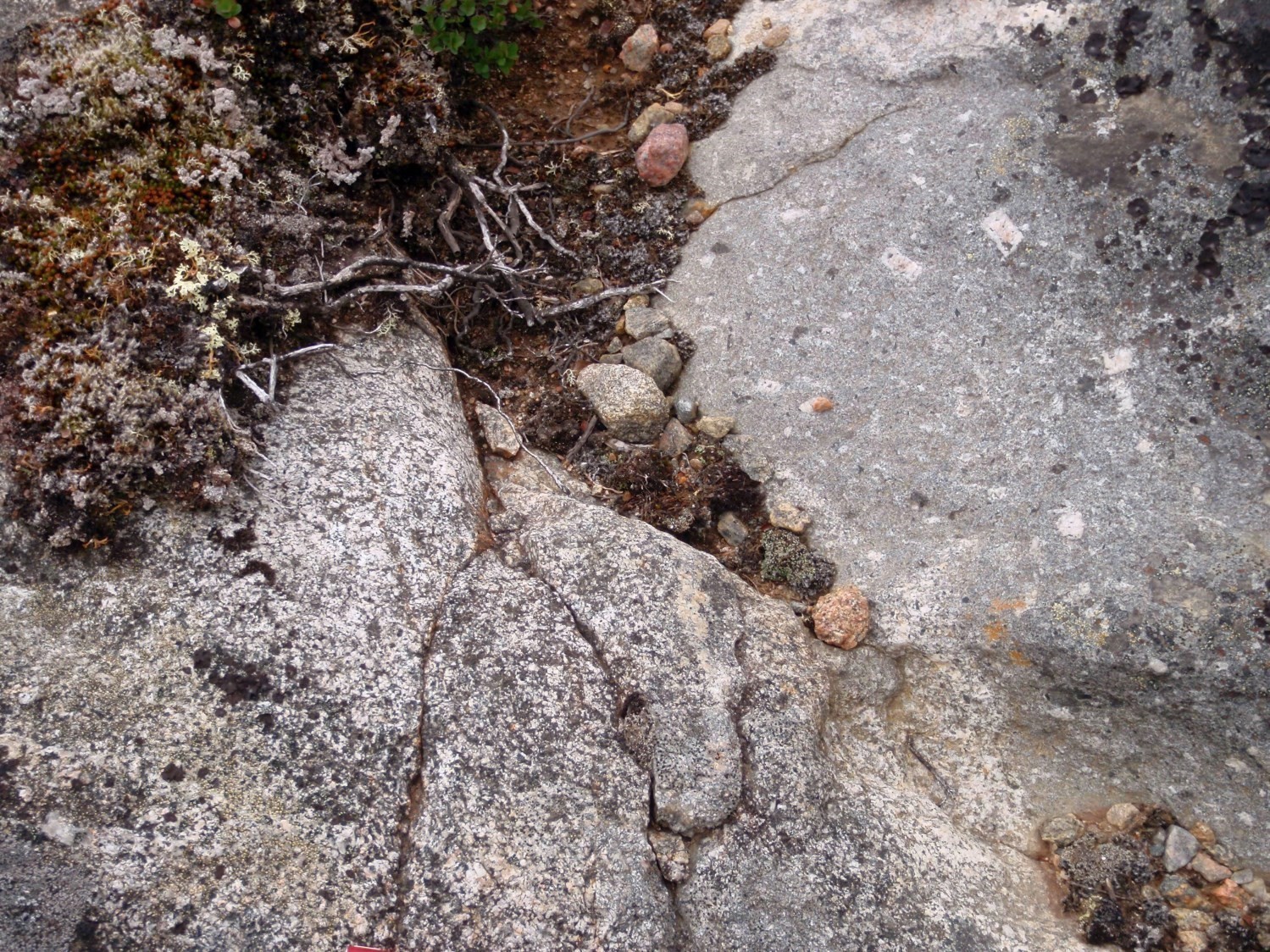 Subunit pPdep1a represents an intrusive phase that varies from quartz diorite to diorite and is characterized by a low phenocrystal content (<5%). It is regularly observed in outcrops with porphyraceous granodiorite and quartz monzodiorite of unit pPdep2. The contact between these different lithologies may be sharp, but it is generally gradual and corresponds to the gradual disappearance of K-feldspar phenocrystals. In other places, subrounded diorite xenoliths containing some microcline phenocrystals (pPdep1a) are also observed in porphyraceous rocks of unit pPdep2 (including subunits pPdep2b and pPdep2c). In some cases, quartz diorite is the dominant phase and may have been drawn on the map (pPdep1a).

Rocks of subunit pPdep1a are homogeneous, medium to fine grained, even grained, grey and massive to weakly foliated. They contain 15 to 25% brown biotite and green hornblende, as well as a significant amount of accessory minerals including sphene, allanite, apatite, zircon and opaque minerals. In some areas, the rock shows moderate chloritization and epidotization.

Quartz diorite is locally intruded by leucocratic felsic to intermediate material, giving the rock a heterogeneous and locally brecciated appearance. The leucocratic material is in sharp contact with quartz diorite, which in some places forms angular to subrounded enclaves. Locally, these injections produce banding parallel to the regional fabric. Danis (1988, 1991) proposes that brecciated zones were formed by the fracturing of quartz diorite resulting from a surge of slightly more felsic magma.

A few small melanocratic monzonite and monzodiorite lenses associated with quartz diorite have been grouped in subunit pPdep1b. The contact between these two lithologies was not observed during 1:250 000 mapping campaigns carried out by the Ministère since the summer of 2011. However, van der Leeden (1995) describes this subunit as transitional and gradual metric to decametric layers in quartz diorite. These rocks, dark grey to black and fine-grained, include rounded mafic aggregates of biotite and hornblende with clinopyroxene cores up to 1.5 cm locally. K-feldspar is in some places concentrated in centimetric bands. Many accessory minerals are observed in thin section, the main percentages of which are epidote and sphene.

Unit pPdep2 groups a variety of phases typically characterized by a positive magnetic signature. It consists largely of granodiorite and quartz monzodiorite, but also includes monzogranite, syenogranite and quartz syenite. Pale to whitish pink microcline occurs as euhedral phenocrystals (1-6 cm, locally up to 10 cm), but is also present in the coarse to medium-grained matrix. Phenocrystals, which account for 5 to 25% of the rock, are locally aligned but generally show a random orientation. The rock is pinkish grey in fresh exposure and pinkish white in alteration patina. It is massive to weakly foliated except in mylonitic deformation zones associated with large NW-SE to N-S shear zones. On outcrops, fine-grained monzodiorite is also present, containing ~5% of 3 to 7 mm microcline phenocrystals. This monzonite is found in partially gradual or irregular contacts, associated with reaction rims, or as enclaves in porphyraceous rocks. These observations seem to indicate a mostly contemporary development of these two lithologies.

Ferromagnesian minerals (15-25%), which consist of brown to green biotite regularly accompanied by green hornblende, form millimetric to centimetric clusters. A significant amount of accessory minerals (2-5%), including sphene, epidote-surrounded allanite, magnetite and apatite are associated with these clusters. Clinopyroxene (<5%) was also observed locally, as well as muscovite, carbonates and zircon, which commonly occurs as inclusions in biotite. Rocks are variably altered; chloritization of biotite and formation of sericite, muscovite, epidote, carbonate and fine hematite inclusions or lamellae in feldspar are observed. Phenocrystals contain rounded inclusions of quartz, plagioclase and biotite. In thin section, the rock shows well-preserved igneous textures, some recrystallization and many myrmekites bordering phenocrystals. Quartz grains form a mosaic of crystals showing strong undulatory extinction. 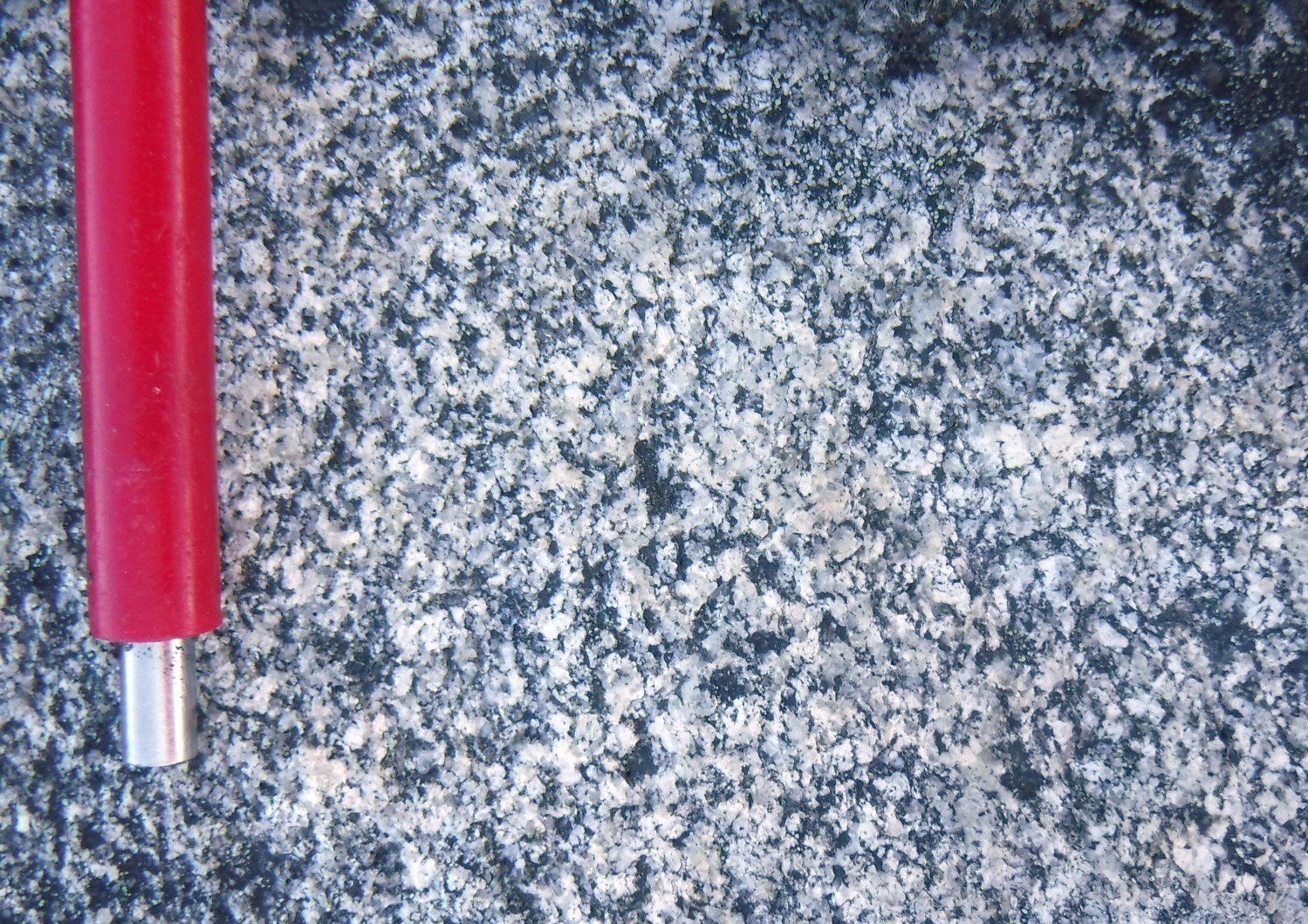 Some zones of granodiorite and quartz monzodiorite do not contain K-feldspar phenocrystals and have been distinguished from the porphyraceous phase when they were of sufficient size. Zones grouped in this subunit generally show diffuse contact with porphyraceous rocks and appear to be cogenetic with them. Subunit pPdep2a consists mainly of medium-grained, massive to foliated granodiorite and monzogranite. K-feldspar is distributed heterogeneously and locally forms coarser crystals (0.5-1 cm). 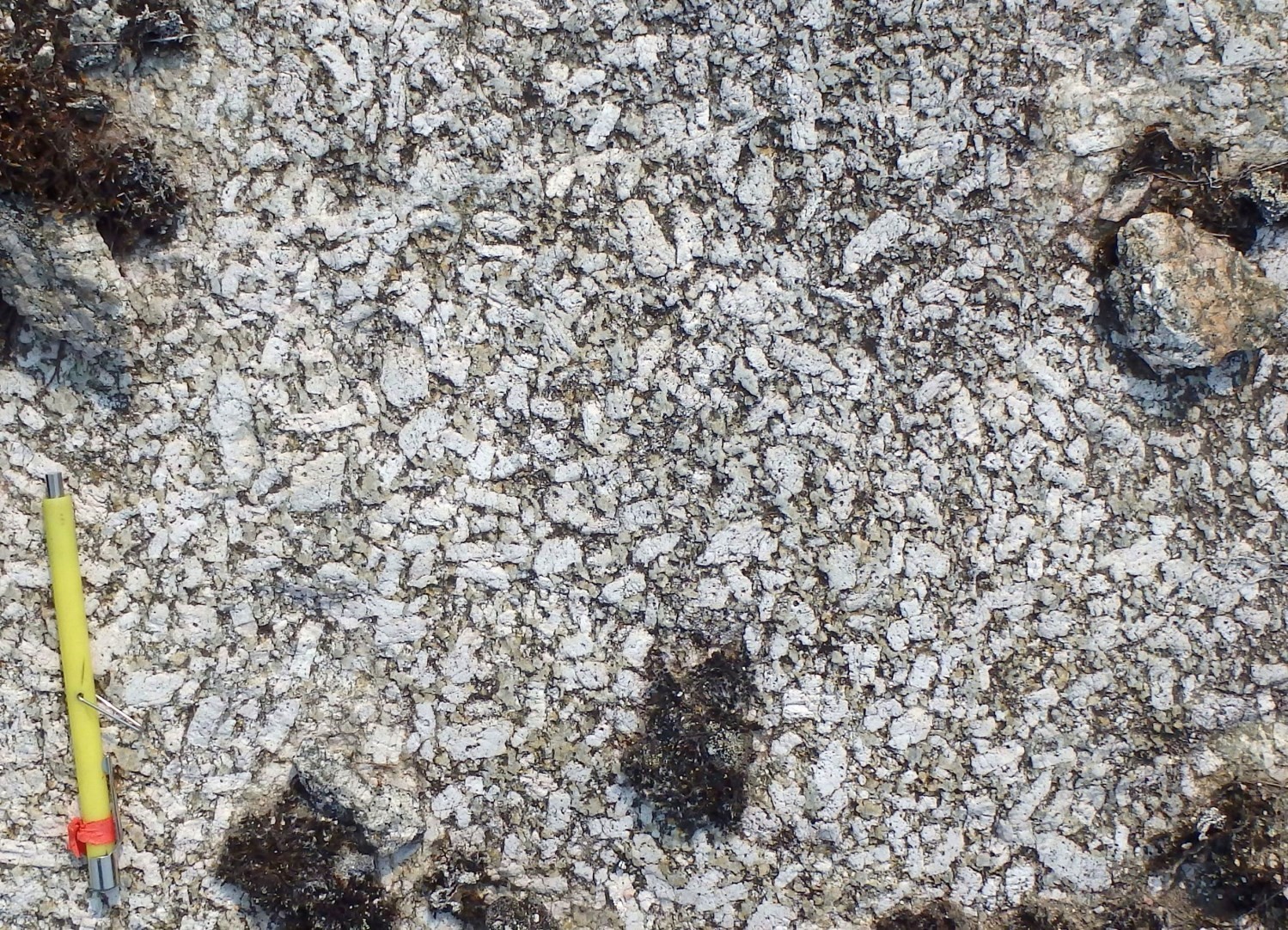 In the Henrietta Lake and Brisson Lake areas, porphyraceous potassic intrusive rocks that form N-S-to NW-SE oriented elliptical intrusions associated with very strong positive aeromagnetic anomalies were grouped into subunit Pdep2b (Lafrance et al., 2015, 2016). This subunit is located along the ZCrge. In these areas, the rock is distinguished by its dark pink and black speckled appearance caused by the presence of 25 to 50% euhedral near joints, and microcline crystals 0.3-3 cm long (locally up to 5 cm long). Between microcline grains, the matrix is finely recrystallized, especially at the edge of phenocrystals. Ferromagnesian minerals, mainly biotite, are slightly less abundant (8-20%) than in unit pPdep2 and form clusters with the same accessory minerals found elsewhere in this unit. Two intrusions of 2 to 3 km by 7-8 km at the eastern boundary of the De Pas Supersuite in the Bonaventure Lake area (Hammouche et al., 2011) are also attributed to this highly magnetic facies. In this area, subunit pPdep2b consists of porphyraceous, mainly intermediate intrusive rocks (monzonite and quartz monzonite) and includes, in smaller amounts, granite and granodiorite. 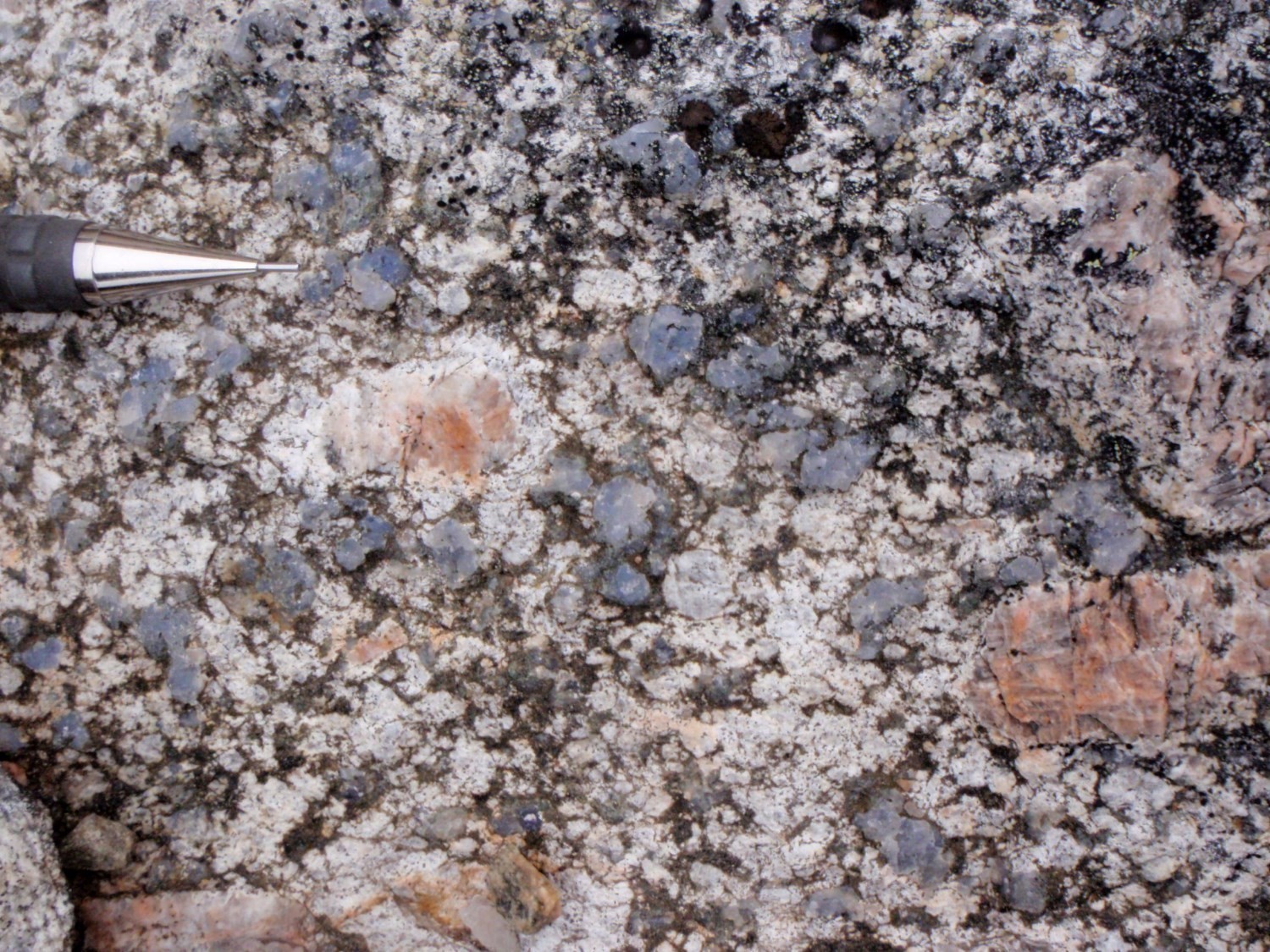 At the far west of the De Pas Supersuite, in the Henrietta Lake area, a portion of the De Pas Granitic Suite characterized by a negative magnetic signature is designated as subunit pPdep2c. This subunit consists of granodiorite and quartz monzodiorite, distinguished by the presence of bluish quartz, responsible for the darker shade of the rock, and by the peculiar habitus of K-feldspar, which occurs exclusively as euhedral phenocrystals ranging in length from 0.5 to 13 cm (mainly ~2-5 cm). Phenocrystals are not distributed uniformly and magmatic layering has been observed over several outcrops. This layering is expressed by alternating decimetric layers consisting mainly of microcline phenocrystals (>75%) overlain by layers becoming less and less rich until they are practically non-existent. A magmatic foliation is marked by the alignment of phenocrystals. Rapakivic textures were also observed locally in subunit pPdep2c. In thin section, the rock shows some initial recrystallization, especially around the edges of microcline phenocrystals.

Unit pPdep3 corresponds to very heterogeneous zones where potassic intrusive rocks contain nearly 50% of various enclaves, mainly gneiss, migmatite and diorite. These pinkish grey to light pink intrusive rocks are heterogeneous, medium to coarse grained, and vary in composition from granitic to granodioritic, locally tonalitic. High assimilation of enclaves by granite gives the rock a marbled texture or results in irregular and undulating banding locally marked by discontinuous laminae of ferromagnesian minerals. In more homogeneous areas, unit pPdep3 potassic intrusive rocks are leucocratic and contain 5 to 10% ferromagnesian minerals. The contact between this subunit and gneiss of the Saint-Sauveur Complex is gradual, with the gneiss showing fewer and fewer intrusions as they move away from the De Pas Supersuite.

Unit pPdep4 consists of several homogeneous potassic intrusive phases intruding into each other, locally giving a heterogeneous appearance to outcrops. There are three main intrusive phases, none of which can be mapped at the scale of our work: 1) monzogranite containing 8 to 15% ferromagnesian minerals; 2) granite containing 5 to 10% biotite; and, 3) white granite containing <5% ferromagnesian minerals. Monzogranite and biotite granite are medium grained and massive to slightly foliated. Brown to greenish biotite is the main ferromagnesian mineral, but green hornblende is also found in small amounts, particularly in monzogranite. These two phases are primarily distinguished by their colour, monzogranite being grey, locally pink and biotite granite light pink to pinkish grey (lighter than monzogranite). In both cases, thin sections reveal a relatively well-preserved igneous texture associated with moderate to high recrystallization at grain edges. There are also myrmekitic and anti-perthitic textures, as well as undulatory extinction of quartz. Feldspar shows some initial alteration with the formation of sericite, epidote and carbonate. Accessory minerals, especially epidote and allanite, are abundant (1-4%) and often accompanied by small clusters of ferromagnesian minerals scattered in the rock. They also include sphene, apatite, opaque minerals, zircon as inclusions in biotite and, more locally, fluorite.

Pink leucogranite is massive, medium grained to pegmatitic, and intrudes as centimetric to decimetric layers and dykes in the other granitic phases of unit pPdep4. At this time, the majority of granitic rocks observed within the De Pas Supersuite envelope have been assigned to unit pPdep4. However, it is likely that some of these rocks, particularly leucogranite, represent a much later unit similar to the Dancelou Suite.

Unit pPdep5 consists of nine hectometric to kilometric syenite and monzonite intrusions located in the western portion of the De Pas Granitic Suite. The rock is magnetic, homogeneous, granular, massive to foliated and dark pink or black and pink speckled. It contains 15 to 25% biotite and clinopyroxene, the latter mineral being variably replaced by hornblende. In thin section, some initial recrystallization at grain edges, numerous myrmekitic and perthitic textures in feldspar and, more locally, ferromagnesian minerals with skeletal textures are observed. Accessory minerals, mainly opaque minerals, apatite, sphene, epidote, allanite and zircon, are abundant and generally close to ferromagnesian minerals.

Several dates indicate that the main unit of the De Pas Granitic Suite (pPdep2) was probably emplaced in several episodes spread over a period of nearly 50 Ma (1862-1813 Ma). Unit pPdep4, considered the latest of the De Pas Supersuite, yielded ages between 1817 Ma and 1805 Ma, confirming its emplacement towards the end of the magmatic episode.

The De Pas Granitic Suite rocks cut gneiss of the Saint-Sauveur Complex. They also contain several enclaves of these gneiss, as well as migmatite from the Guesnier Complex, diorite, gabbro and volcano-sedimentary rocks of the Tunulic Complex. Field relationships indicate that the contact with the De Pas Charnockitic Suite is transitional.