Van der Leeden (1985, 1994, 1995) first identified significant shear zones along the George River, in the area where it widened to become the Hutte Sauvage Lake (NTS sheet 23P15), in the SE Quebec portion of the Southeastern Churchill Province (SECP). He associates these shear zones with a major regional structure called the Rivière George Shear Zone (ZCrge). The length of its N-S extension is then estimated at >200 km based on aeromagnetic surveys. Indeed, these shear zones have been recognized southward to the Quebec-Labrador boundary (Owen, 1989; Danis, 1991; Tanner, 1992; Hammouche et al., 2011) and northward to Ungava Bay (Girard, 1990; Simard et al., 2013; Lafrance et al., 2014, 2015, 2016). Gravity (Telmat et al., 1999), geochronology (Dunphy and Skulski, 1996; Isnard et al., 1998) and geology (Bardoux et al., 1998) work carried out on the edge of Ungava Bay, as part of the Lithoprobe project, also helped define the zone of influence of the deformation zone, its characteristics and its relationship to other major structures of the SECP.

This structural record is based on all of the previous work cited above. Structural measurements used in stereograms come from geological surveys conducted by the Ministère between 2009 and 2015 at 1:250 000 and 1:50 000 scales. The regional structural grain, as well as the ZCrge influence zone, was determined by combining field observations with aeromagnetic surveys (D’Amours and Intissar, 2012a, b, 2013; Intissar et al., 2014). A detailed structural study of the ZCrge was also conducted as part of a master’s thesis (Vanier et al., 2017, 2018).

The ZCrge is a regional structure grouping an anastomosed network of sheared rock within which metric layers less deformed are inserted. This structure crosses the entire SECP. It marks the eastern boundary of the George Lithotectonic Domain (Charette et al., 2018) with the Falcoz and Mistinibi-Raude domains (Lafrance et al., 2019) to the NE and SE respectively. The anastomosed morphology, in addition to the NNW-SSE deflection occurring at the junction of the Moonbase Shear Zone (ZCmob), naturally divides the ZCrge into three branches: 1) a NNW-SSE oriented northern branch; 2) a N-S oriented southern branch; and, 3) a N-S oriented central branch surrounding a less deformed zone. The latter corresponds largely to the Brégent Shear Zone defined by Lafrance et al. (2016). The ZCrge various branches are located on the total residual magnetic field figure shown below in the “geophysical characteristics” section.

All units of the George Lithotectonic Domain were affected by the deformation. These are thinned and fully transposed in the N-S mylonitic foliation (van der Leeden et al., 1990; Lafrance et al., 2015). Mylonitic deformation affects both Paleoproterozoic rocks of the De Pas Supersuite and Archean to Paleoproterozoic units (Tunulic, Saint-Sauveur and Guesnier complexes). However, the De Pas units are not systematically affected by this deformation, indicating a syntectonic to late-tectonic emplacement in relation to the ZCrge.

Mylonitic rocks are marked by a main shear surface whose orientation is the same as secondary tectonometamorphic foliations and gneissosities measured on less deformed outcrops. As a result, planar fabrics are here grouped into one family (Sn). The latter commonly contains a secondary tectonometamorphic mineral lineation or stretching lineation (Ln). Given the size of the shear zone, stereograms were constructed according to the subdivisions presented in the “Limits and morphology” section. Shear planes for the entire shear zone are steep, 70° to 90°. Lineations rather have shallow plunges, that is <25° on average, in a SE direction. However, sparse lineations have a steeper plunge around 45°.

Given the heterogeneous distribution of deformation and the presence of syntectonic to post-tectonic intrusions, there are significant variations in the deformation intensity within the ZCrge. In addition, deformation is expressed differently in different protoliths. The main facies are ultramylonites, porphyroclastic mylonites and orthogneiss. 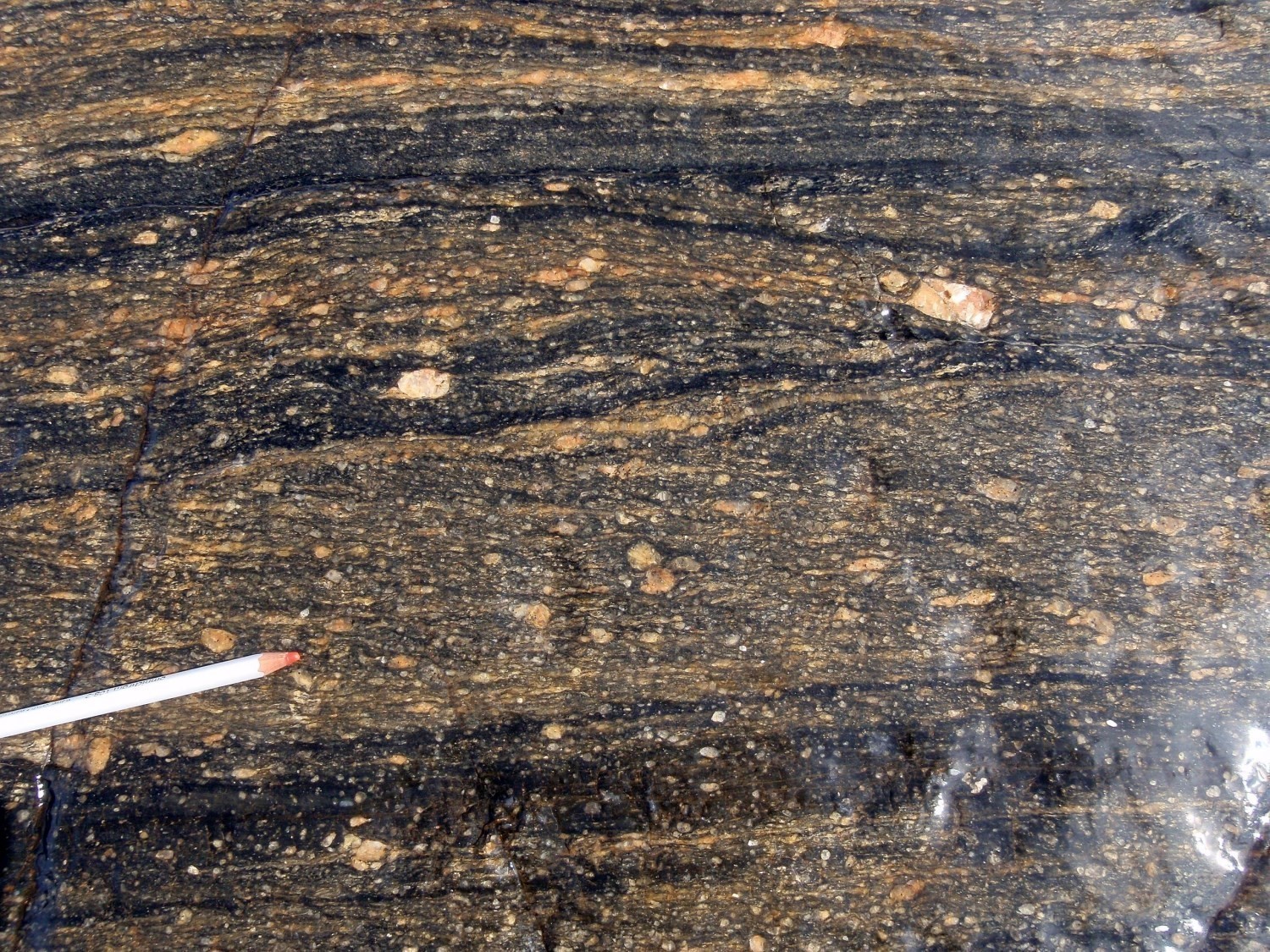 The most deformed rocks are ultramylonites composed of very dark grey crushed material, whose protoliths are no longer recognizable. These rocks represent only centimetric to decimetric layers; they gradually evolve to mylonites containing mildly deformed subhedral feldspars in a matrix similar to ultramylonites. 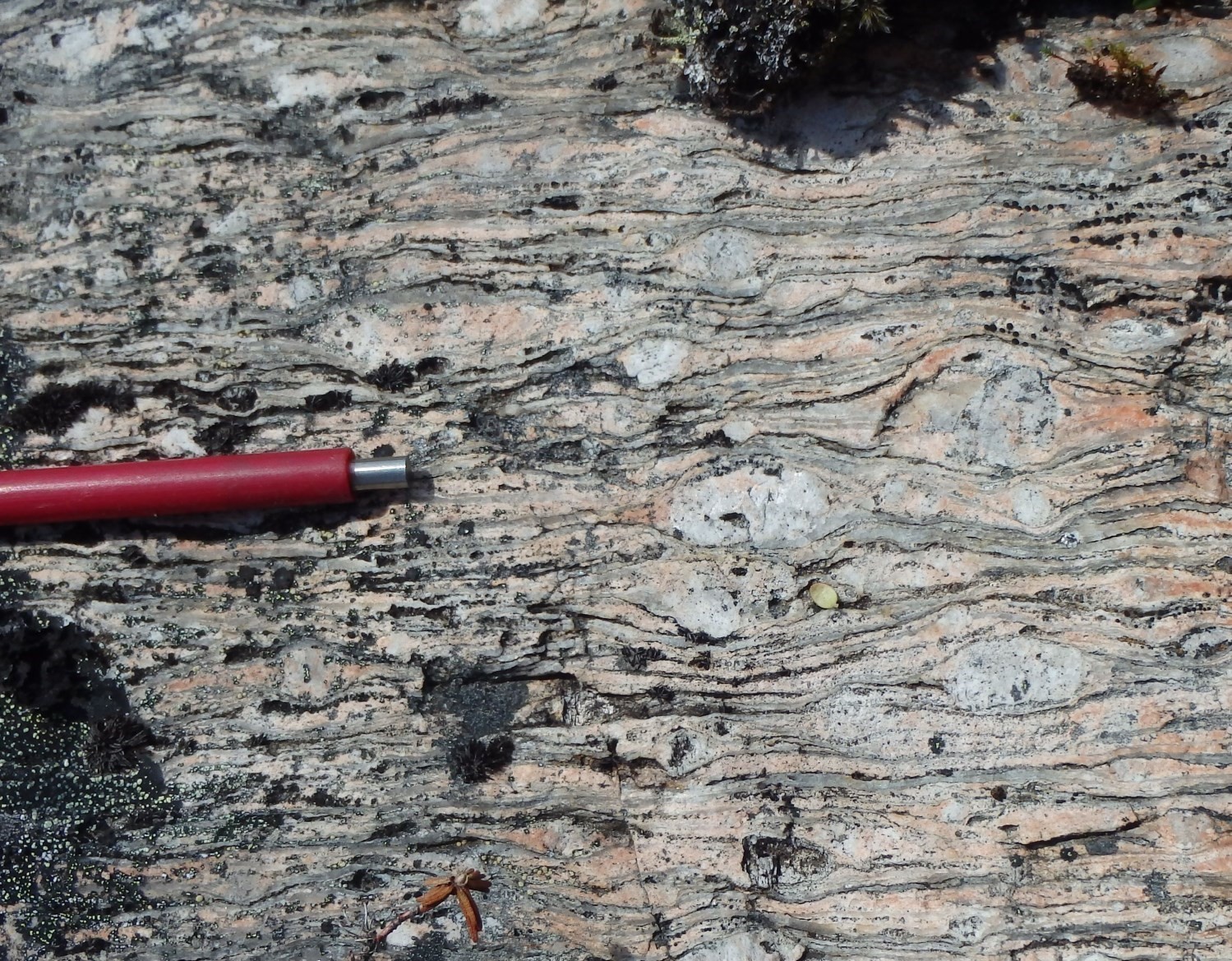 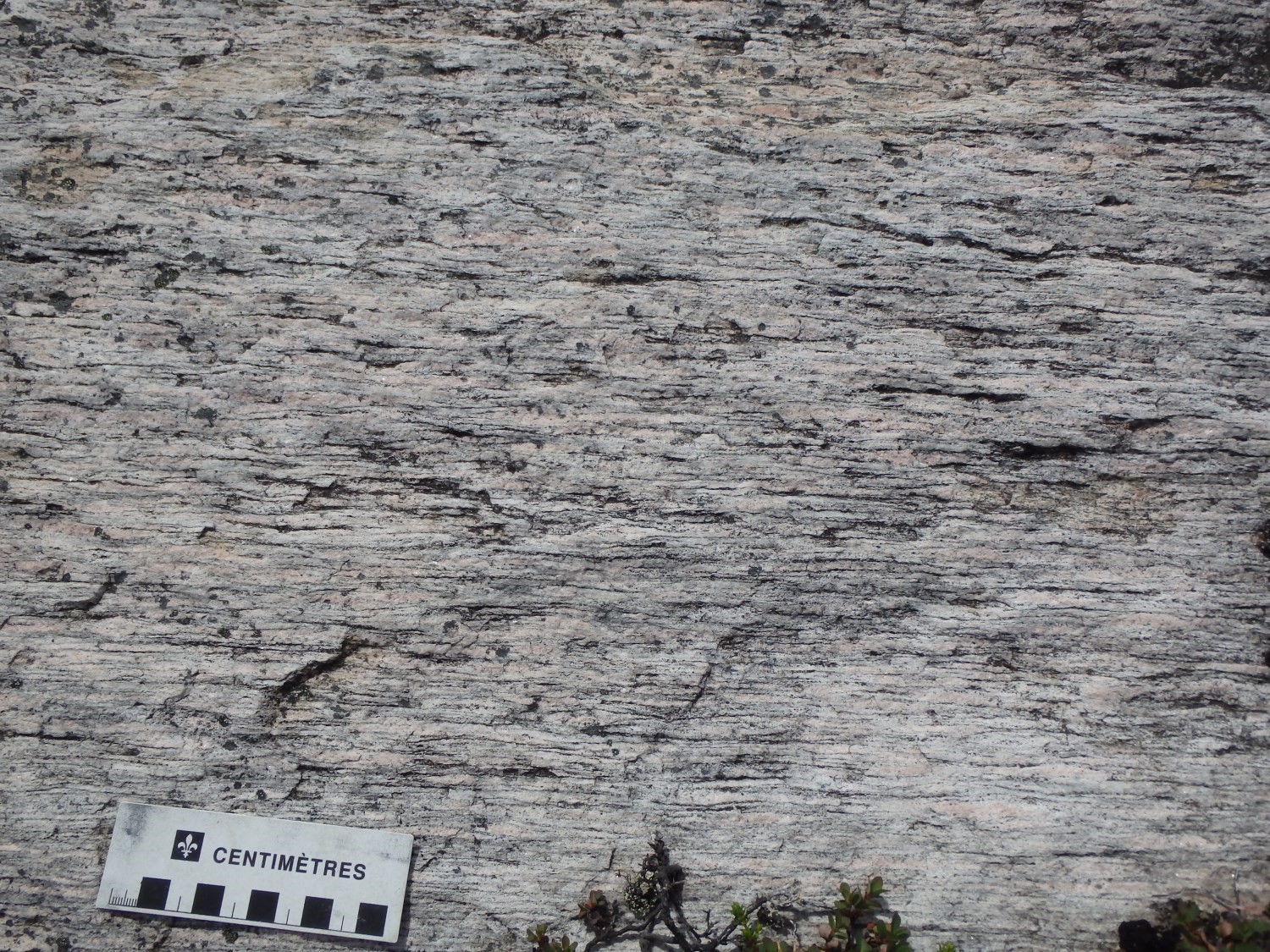 K-feldspar porphyroclastic orthomylonites having a matrix of crushed feldspar and millimetric quartz bands are common; they correspond mainly to sheared edges of the De Pas Granitic Suite. In some more deformed zones, grinding and mineral segregation generate alternating quartz and feldspar bands containing few feldspar porphyroclasts. The deformation is more diffuse in gneissic rocks of the Saint-Sauveur Complex and volcaniclastics of the Tunulic Complex. Highly straight-lined and locally porphyroclastic textures are dominant and resemble upright gneiss. Stretch lineations are present in all of these facies and can be significantly more pronounced than the planar fabric containing it (L>S and L>S tectonites). Stretching is mainly marked by quartz and feldspar porphyroclasts. Analysis of quartz c-axes also indicates widespread constrictive deformation in the ZCrge (Vanier et al., 2018).

Z-folds are locally observed in mylonites which, in association with C/S structures, indicate dextral movement. Isoclinal folds and intrafolial folds are regularly observed in different units affected by the ZCrge.

Geophysical lineaments of the Zeni Shear Zone (ZCzen) are oriented E-W, while those of the ZCrge are N-S. The latter are parallel to foliation traces. The interpretation of aeromagnetic lineaments reveals a N-S discontinuity that cuts or deflects the structural grain of the ZCzen in a dextral manner (Vanier et al., 2018). Thus, the ZCrge is cutting the ZCzen. As for the ZCmob, it continuously joins the central section of the ZCrge to form a conjugate shear system (Vanier et al., 2018; see the “Deformation Style” section below).

The ZCrge is dominated by dextral kinematic indicators; however, several sinistral indicators have also been observed at different locations (van der Leeden, 1990). Girard (1990) gave it a main dextral movement based on the reorientation of the regional structural grain and the offset of reference lithological assemblages. Near Ungava Bay, the ZCrge would also show dextral movement combined with eastward normal displacement (Bardoux et al., 1998). 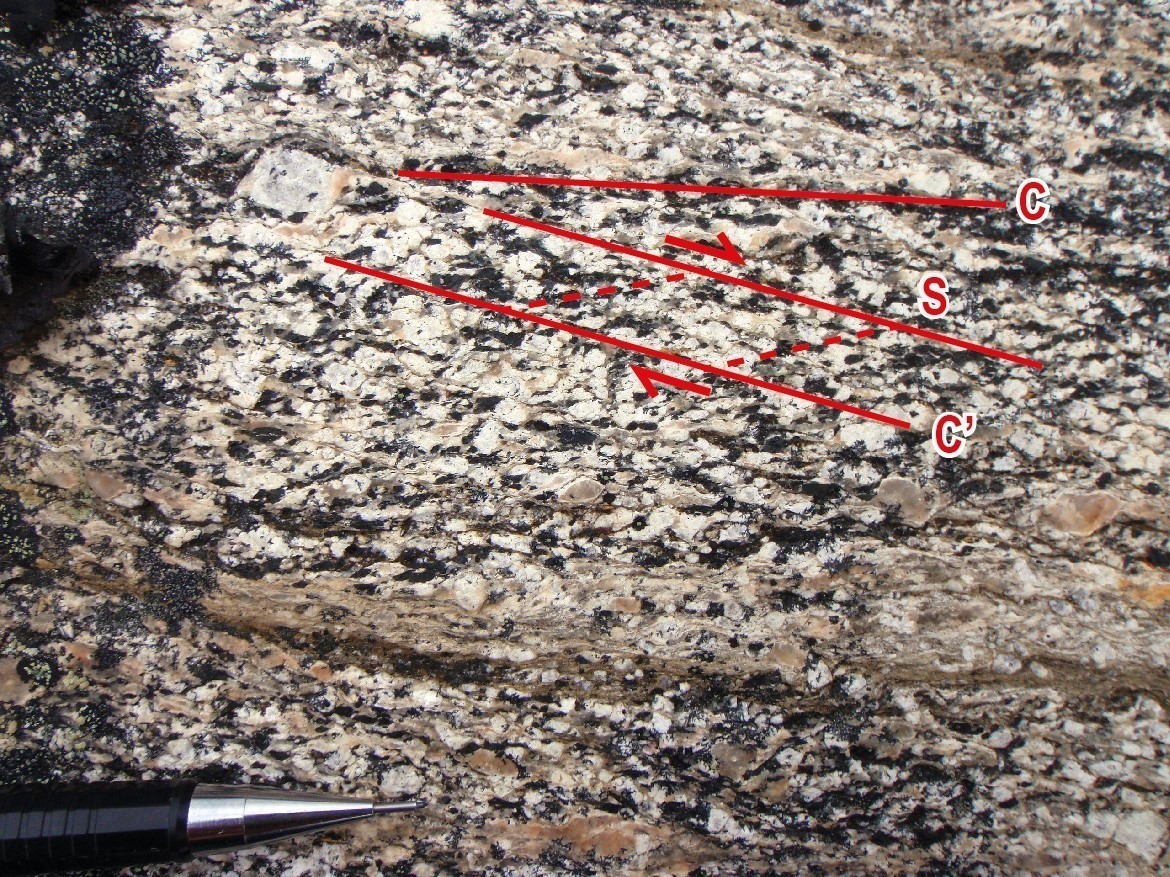 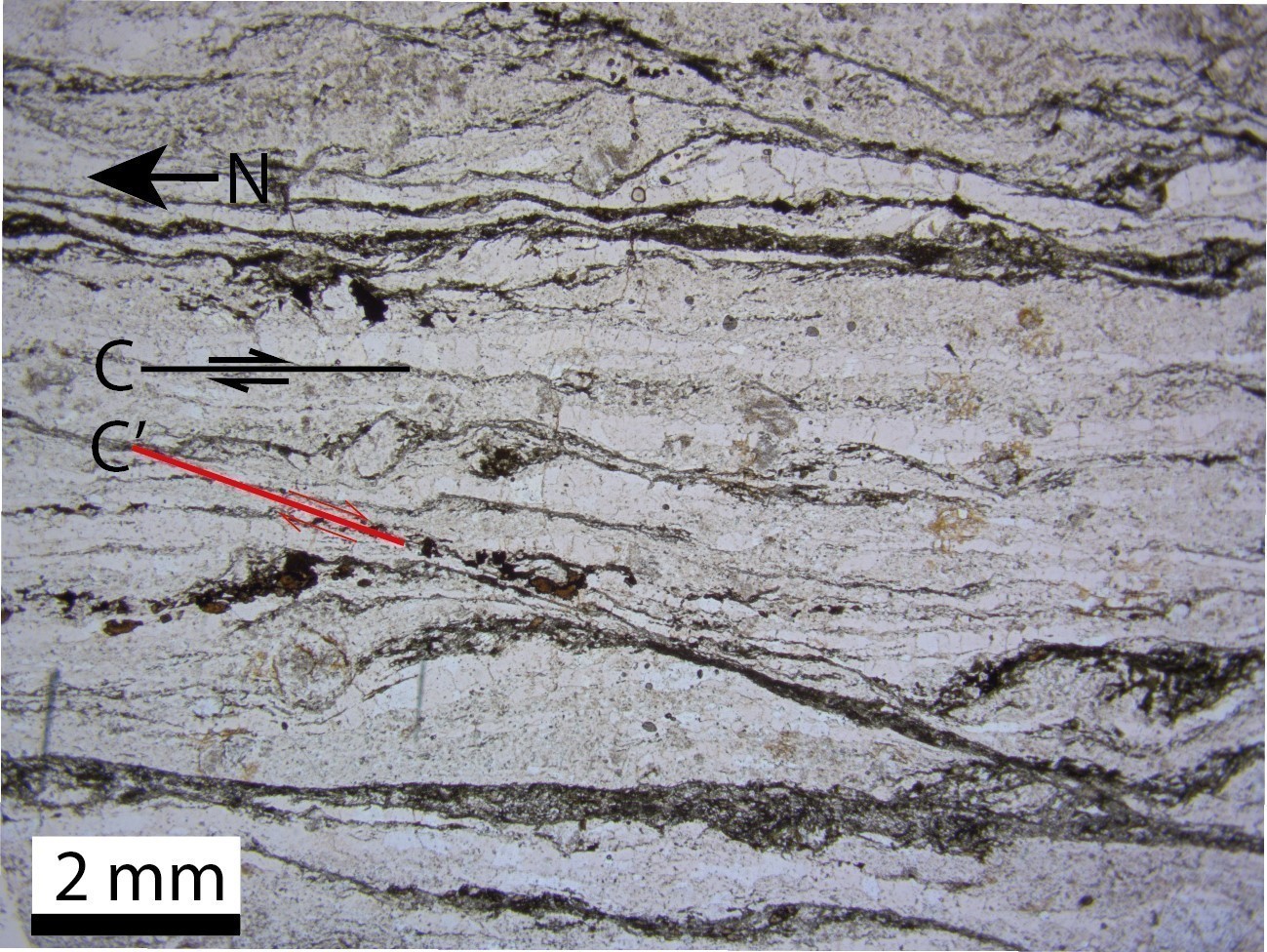 Porphyroclastic mylonites best express kinematics. They regularly contain C’, CS or both structures and sigmoidal porphyroclasts. Dextral C’ structures are also visible at the microscopic scale in even-grained and fine-grained rocks. The dextral movement is also confirmed by quartz c-axis fabrics (Vanier et al., 2018). Several sinistral kinematic indicators are also present. An explanation for the presence of antithetic kinematic indicators was provided by Charette et al. (2018). Ambiguous kinematics, such as when porphyroclasts are symmetrical, are also observed on many outcrops.

The ZCrge is a complex shear zone whose anastomosed shape delineates, on a regional scale, less deformed blocks. This deformation style is also observed at the hectometre scale, where the deformation intensity is heterogeneous, creating alternating mylonites and foliated to little deformed rocks. In addition, the ZCmob joins the ZCrge in a diffuse manner, forming a conjugate ductile shear system (Vanier et al., 2018). The stress regime that produced this shear system consists of shortening along a SW-NE axis. In this context, the ZCrge consists of a dextral transpressive shear zone in medium crust condition (Vanier et al., in preparation). 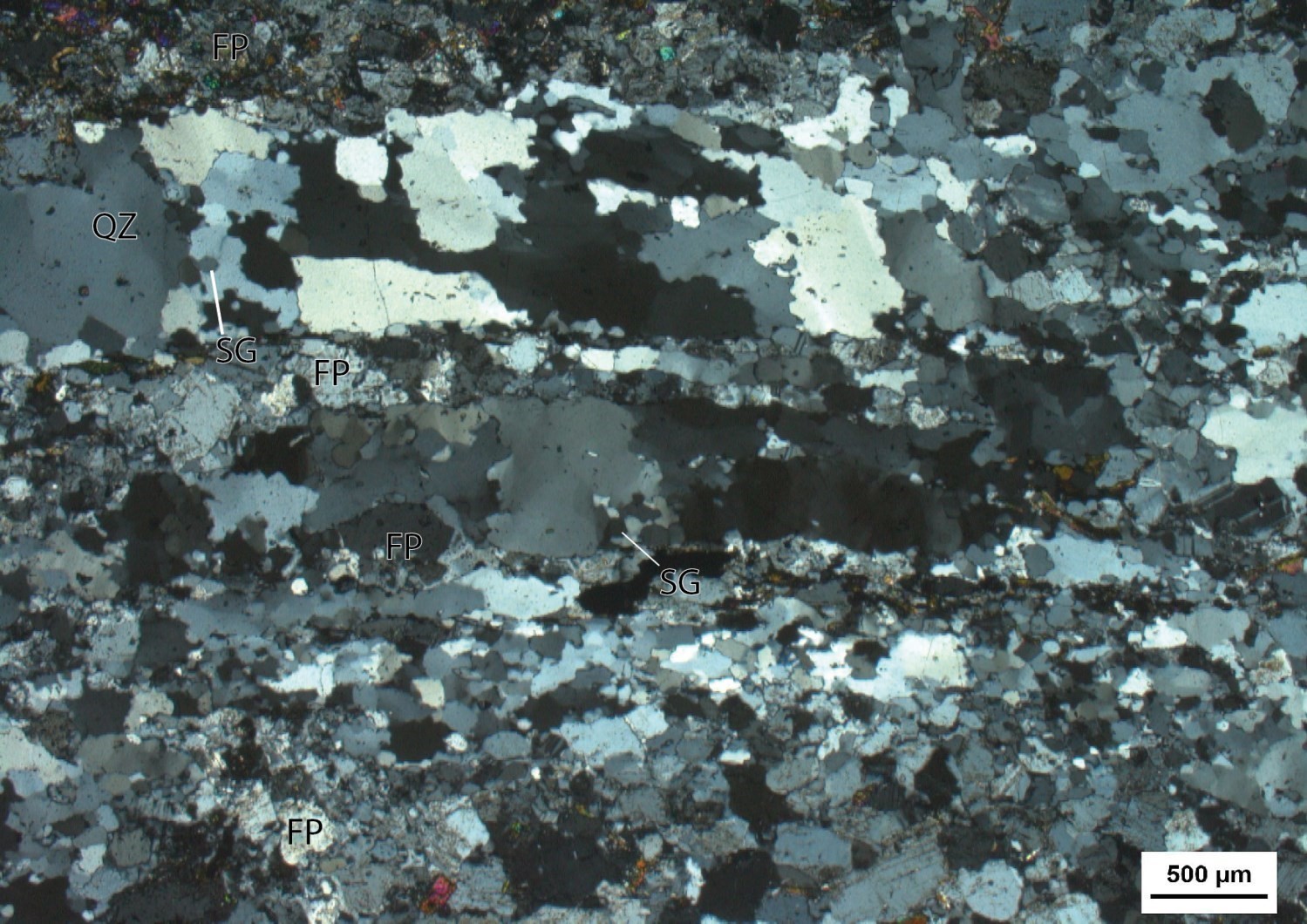 The study of quartz and feldspar dynamic recrystallization textures and analysis of quartz c-axis indicates that the main deformation occurred at temperatures between 500°C and 700°C (Vanier et al., 2018). Indeed, the quartz predominant mechanism of dynamic recrystallization is grain edge migration. This type of dynamic recrystallization is associated with deformation above 500°C (Passchier and Trouw, 2005). Metamorphic assemblages of ZCrge rocks also correspond to the amphibolite facies. Metamorphic minerals, such as micas (mainly biotite), amphiboles and more locally sillimanite, are oriented in the mylonitic fabric. Thus, the main deformation is concomitant or slightly posterior to the peak of metamorphism. Biotite is commonly partially chloritized in volcanic rocks of the Tunulic Complex, indicating greenschist facies retrogressive metamorphism within and near highly sheared zones.

The various branches of the ZCrge correspond to well-defined straight-lined aeromagnetic lineaments, characterized by tightly alternating maximums and minimums of magnetic susceptibility. These lineaments are parallel to the main mylonitic foliation. This pattern is the result of a complete transposition of lithostratigraphic units. Zones with lower deformation intensity are associated with a disorganized aeromagnetic pattern similar to undeformed portions of the De Pas Supersuite adjacent to the ZCrge (mostly to the west). The interpretation of lineaments also indicates dextral offsetting of the ZCzen and Zeni Complex by the ZCrge (Vanier et al., 2018).

The most useful geological unit to constrain the ZCrge temporally is the De Pas Supersuite. It has both ultramylonitic textures and massive, undeformed intrusions cutting the main fabrics, attesting to the syntectonic to post-tectonic character of this unit. Crystallization ages of the De Pas Supersuite range from 1805 Ma to 1862 Ma, which does not contradict the final estimated age of deformation is 1800 Ma as reported by Isnard et al. (1998) and Bardoux et al. (1998).

Dating of a slightly foliated granodiorite cutting mylonitic granite helps to more precisely constrain deformation. The resulting crystallization age (1825 ±2 Ma; Dunphy and Skulski, 1996) is interpreted by the authors as indicating a deformation that is still active at this time, but significantly less intense.