The « Moonbase Deformation Zone » was identified by Ryan (1990) in the Kogaluk River area of Labrador. Initially, it was not described in Quebec and its NW extension was derived from aeromagnetic maps (Wardle et al., 1990, 2002). The NW portion of the Moonbase Zone was mapped by Lafrance et al. (2015, 2016) and renamed the Moonbase Shear Zone (ZCmob).

The ZCmob is generally oriented NW-SE and turns to the NSW-SSE in its eastern portion, where it joins the Blumath Shear Zone (ZCblm). The morphology of the ZCmob is similar to that of the Falcoz and Abloviak shear zones to the north. The ZCmob affects the structural grain of the Rivière George Shear Zone (ZCrge), which is redirected to the NW-SE in this area. Its western limit corresponds to the change in orientation of structures in parallel with the ZCrge NNW-SSE orientation. The ZCmob represents the boundary between the Archean-Paleoproterozoic Falcoz Lithotectonic Domain and the Neoarchean to Paleoproterozoic Mistinibi-Raude Lithotectonic Domain (Lafrance et al., 2019).

Marking the boundary between two lithotectonic domains, the ZCmob distorts units near the contact between the Mistinibi-Raude and Falcoz domains. In this way, it distorts the Kangiqsualujjuaq, Siimitalik and Fougeraye, and Pelland Suite in the Falcoz Domain, in addition to the Mistinibi Complex in the Mistinibi-Raude Domain. This shear zone also affects fabrics of certain units of the George Lithotectonic Domain, such as the Saint-Sauveur, Tunulic and Guesnier complexes, and De Pas Granitic Suite. 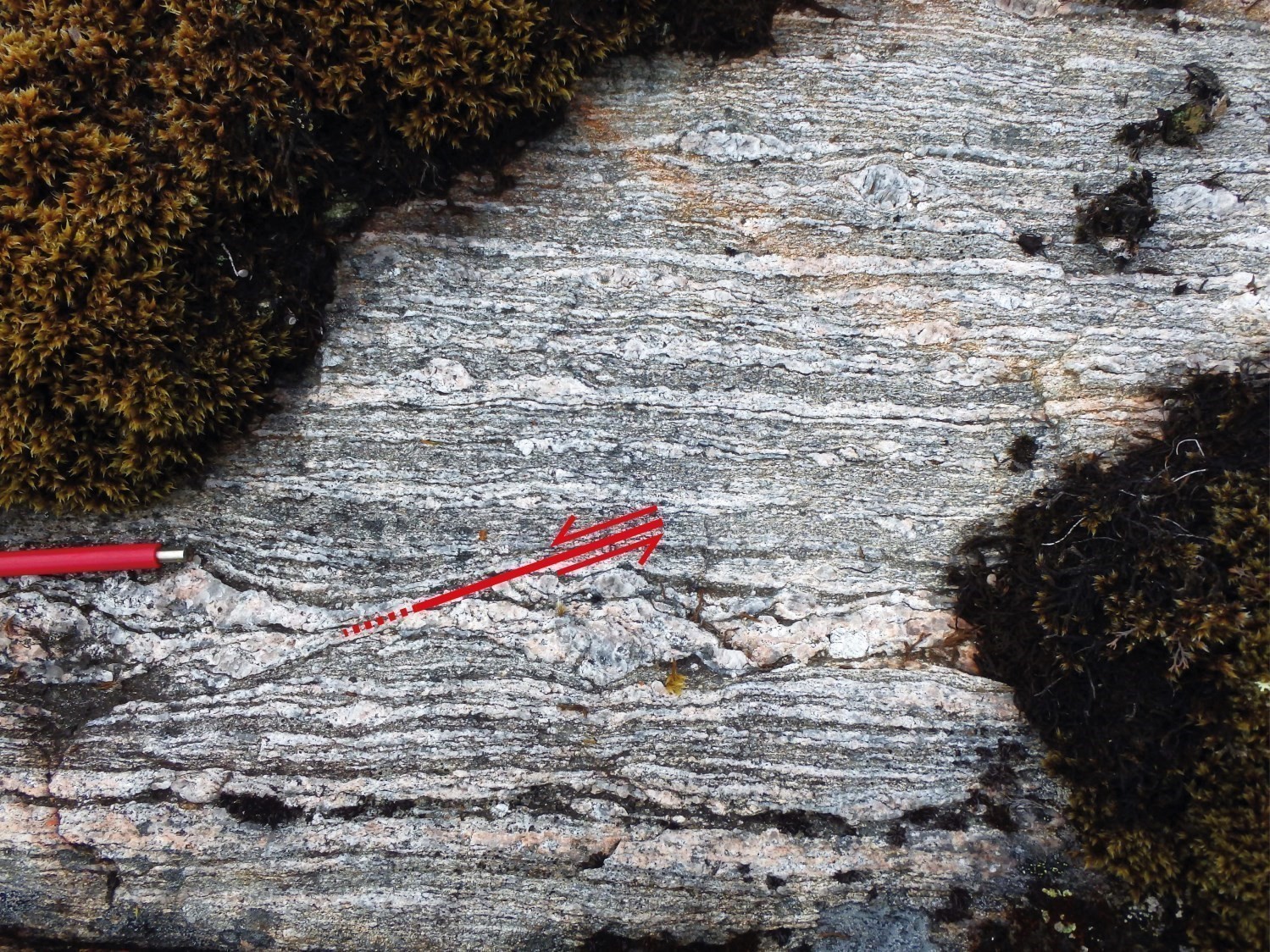 The ZCmob is characterized by well-developed mylonitic foliation or banding (Sn), as well as quartz rods (Ln) or bands, and porphyroclasts. Several decimetric to metric mylonite zones have C/S fabrics. At the junction with the ZCblm to the east, orthomylonites composed of nearly 50% of highly recrystallized matrix occur locally. Bands of broken granite containing K-feldspar or polymineralic porphyroclasts are also observed.

Textures associated with the main fabric include crenulation, undulatory extinction of feldspar crystals, microfractures in grains, dismemberment of microliths and grinding. Within microliths, evidence of dynamic recrystallization is observed such as wedged grain edges and, more locally, grain edge migration.

In its western section, the ZCmob transposes the ZCrge fabric. Within a kilometric strip, the ZCrge NNW-SSE fabric is reoriented to an NW-SE axis. This influence of the ZCmob on ZCrge fabrics is also observed on the vertical magnetic gradient map. 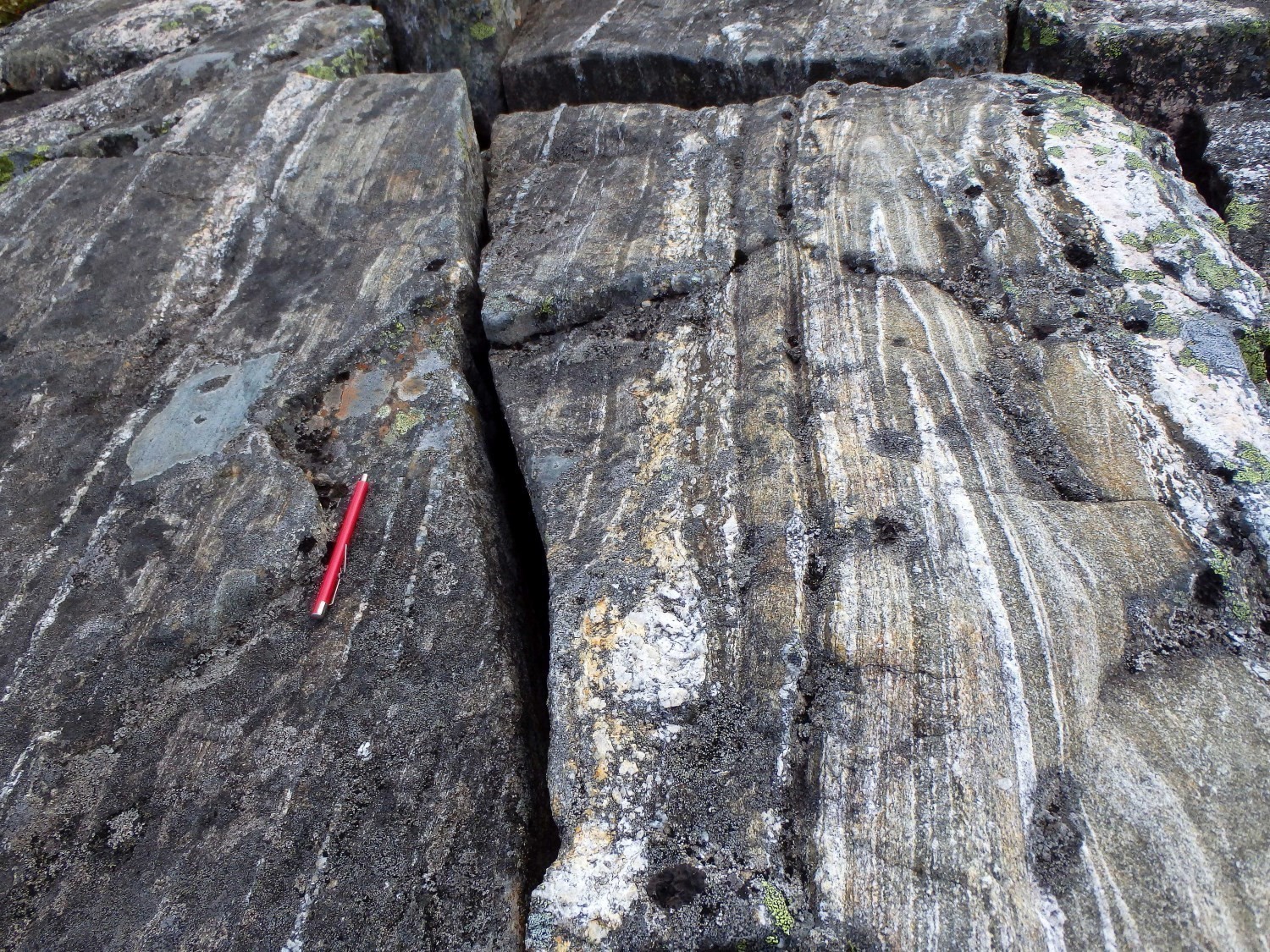 Tight to isoclinal folds are commonly observed in ZCmob mylonitic zones. Their axial plane and fold axis are parallel to the main fabric (Sn and Ln respectively). The formation of these folds (Pn) therefore appears to be associated with the same transpression stress regime producing ZCmob mylonites. 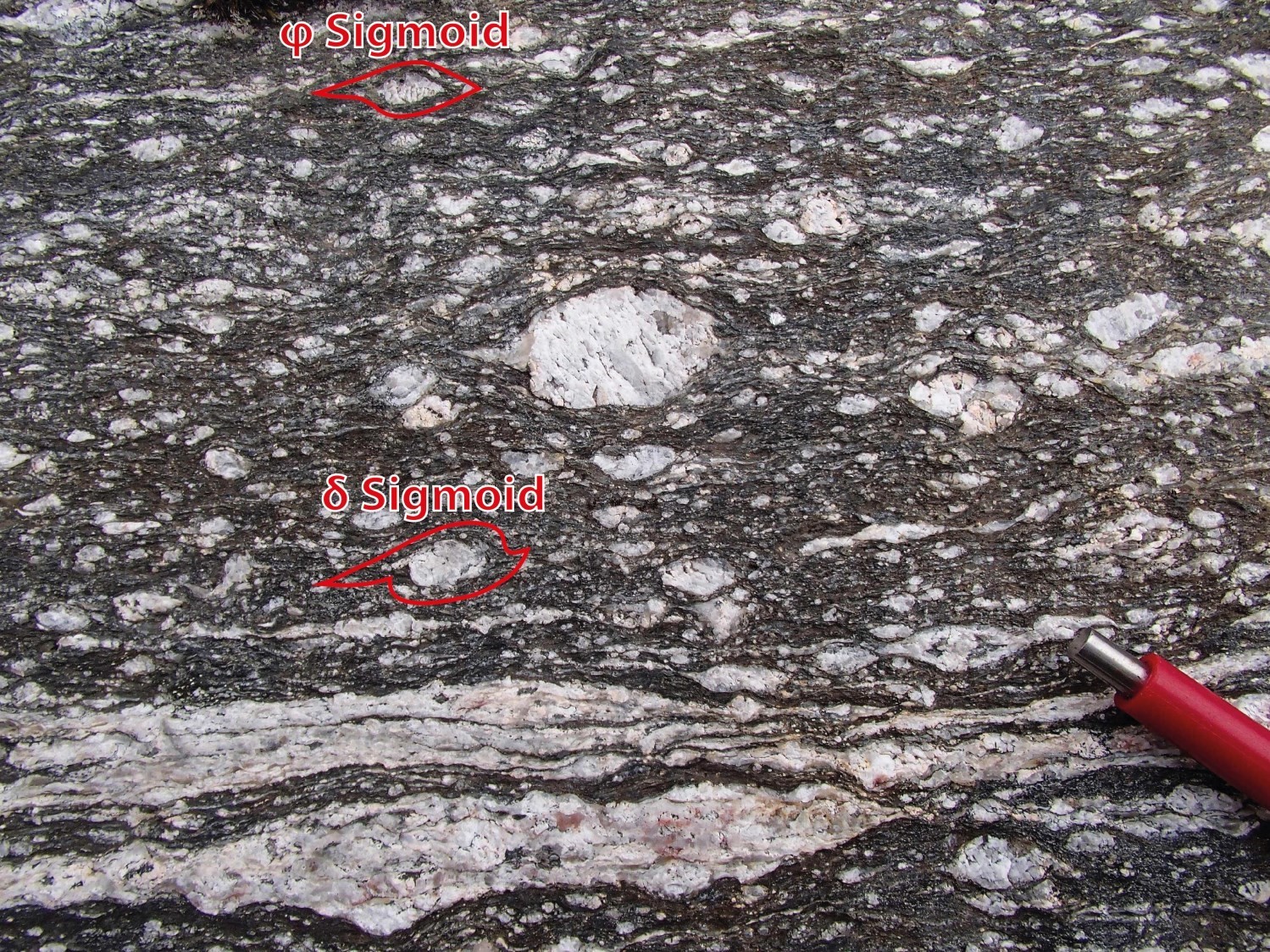 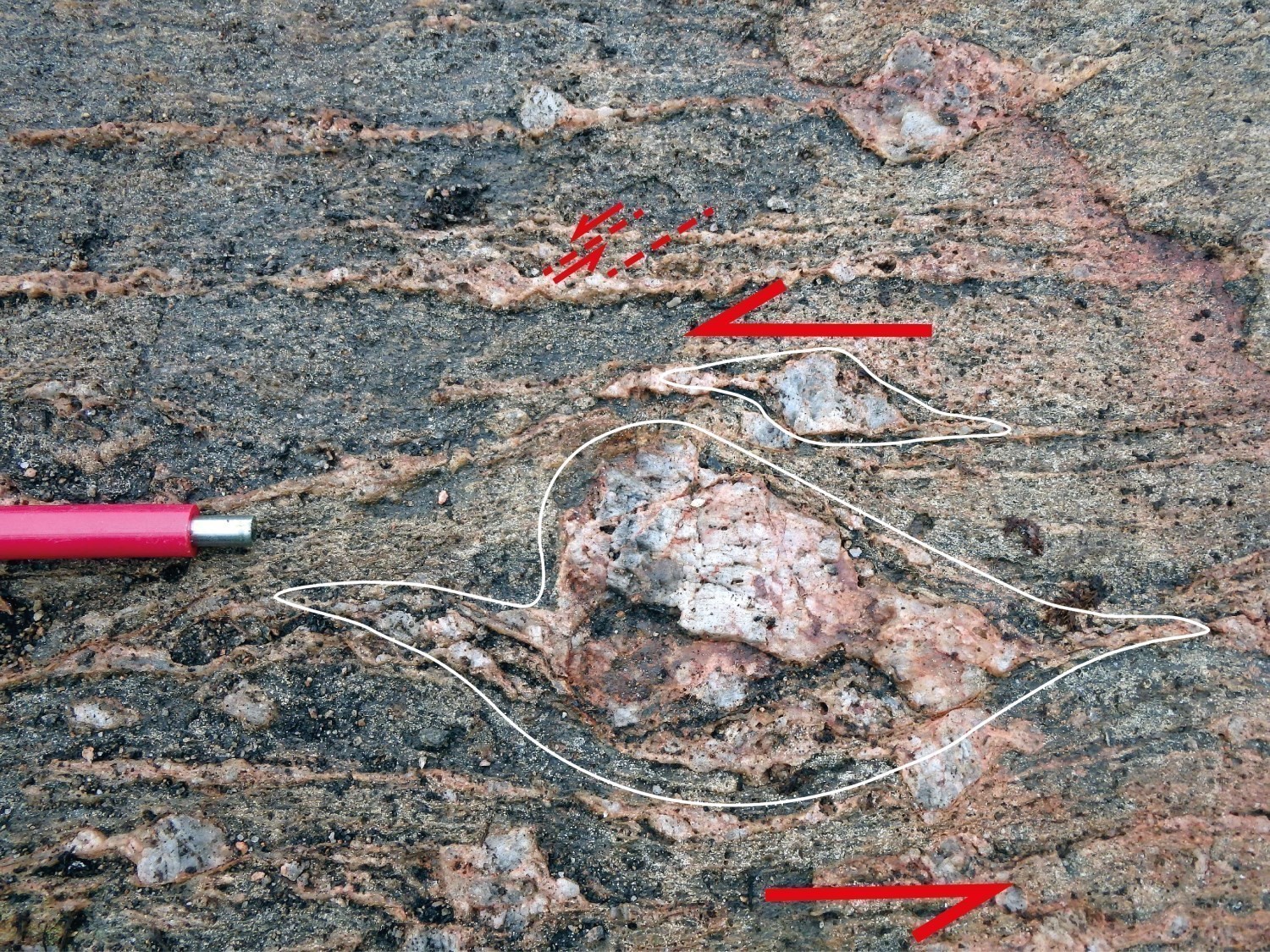 The intensity of deformation within the ZCmob varies from protomylonites to localized zones of ultramylonites. The ZCmob is a sinistral shear zone that may be part of a conjugate deformation system with the ZCrge (Vanier et al., 2018). The angle between these two shear zones as well as their respective suggest that they belong to the same stress system. The geometry of this system is also consistent with the NE-SW orientation of extension fractures interpreted from geophysical lineaments locally occupied by dykes (Vanier et al., 2018). Although structural lineaments suggest that these two shear zones are synchronous, the concomitant deformation along these structures is, however, still to be demonstrated by geochronological data.

Metamorphic minerals are oriented in the mylonitic fabric and are affected by grain reduction or dynamic recrystallization in intensively deformed zones.

Late alteration is observed locally on outcrops as hematite and epidote associated with fractures. This alteration and brittle deformation are superimposed on the mylonitic deformation.

A very limited number of chronological markers are available to constrain the age of the ZCmob deformation. A crystallization age of 1861.7 ±4.7 Ma was obtained from U-Pb analyses on zircons in protomylonitic granodiorite (David, personal communication, 2018). Lafrance et al. (2016) interpret its emplacement as syntectonic, which implies that the shear zone was already active at that time.

Late granites of the De pas Granitic Suite (unit pPdep4) are not affected by the ZCmob mylonitic deformation. Their crystallization age estimated between 1820 Ma and 1805 Ma represents the minimum age for this deformation.