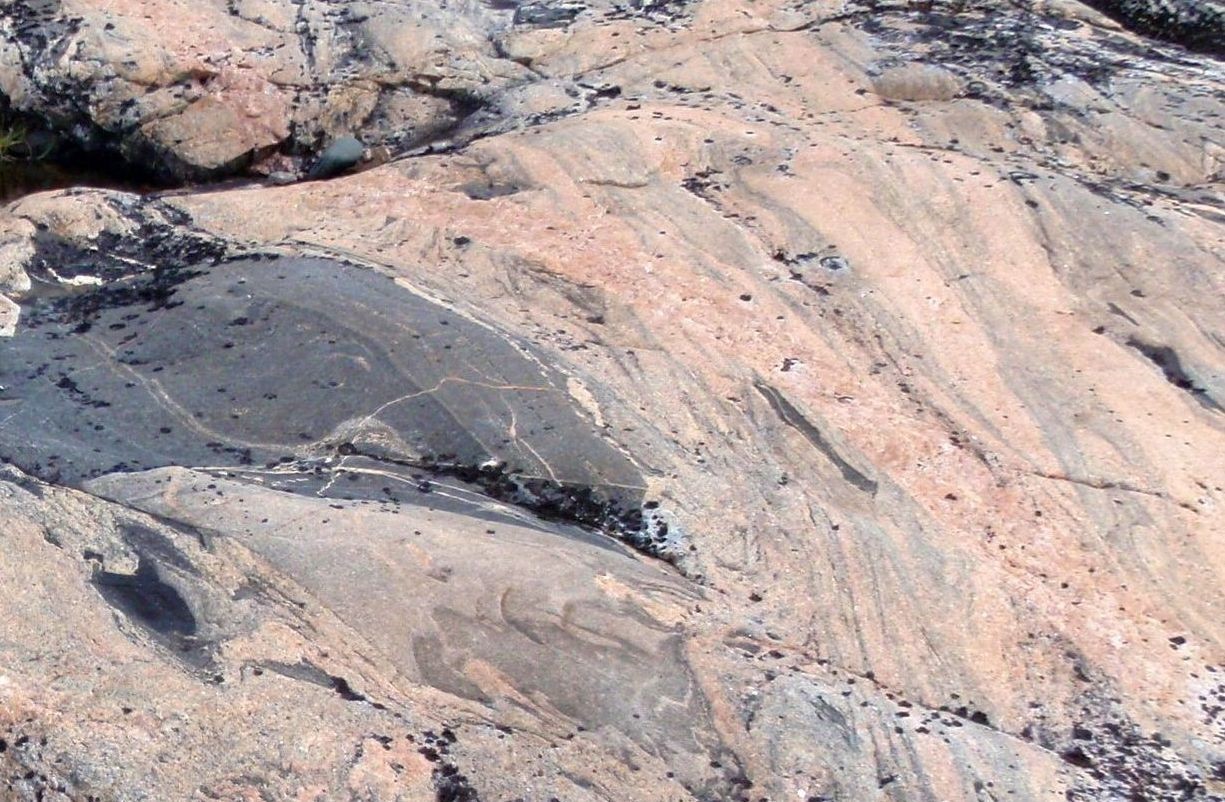 The Siimitalik Suite consists of three units: 1) a unit of granodiorite and monzogranite, heterogeneous and foliated (ApPsik1); 2) a unit of monzogranite, granodiorite and tonalite, homogeneous (ApPsik2); and 3) a speckled hornblende quartz diorite and quartz monzodiorite unit (ApPsik3). The various units of the Siimitalik Suite are commonly observed together on outcrops, moving from heterogeneous to homogeneous zones in diffuse contact. Contacts between these units were plotted according to the surface-dominated lithology. Although the Siimitalik Suite is generally associated with a positive magnetic anomaly, the magnetic susceptibility of the rocks of the different units is variable. In general, most of the outcrops of the ApPsik1 heterogeneous unit are magnetic, while the opposite is true for units ApPsik2 and ApPsik3. 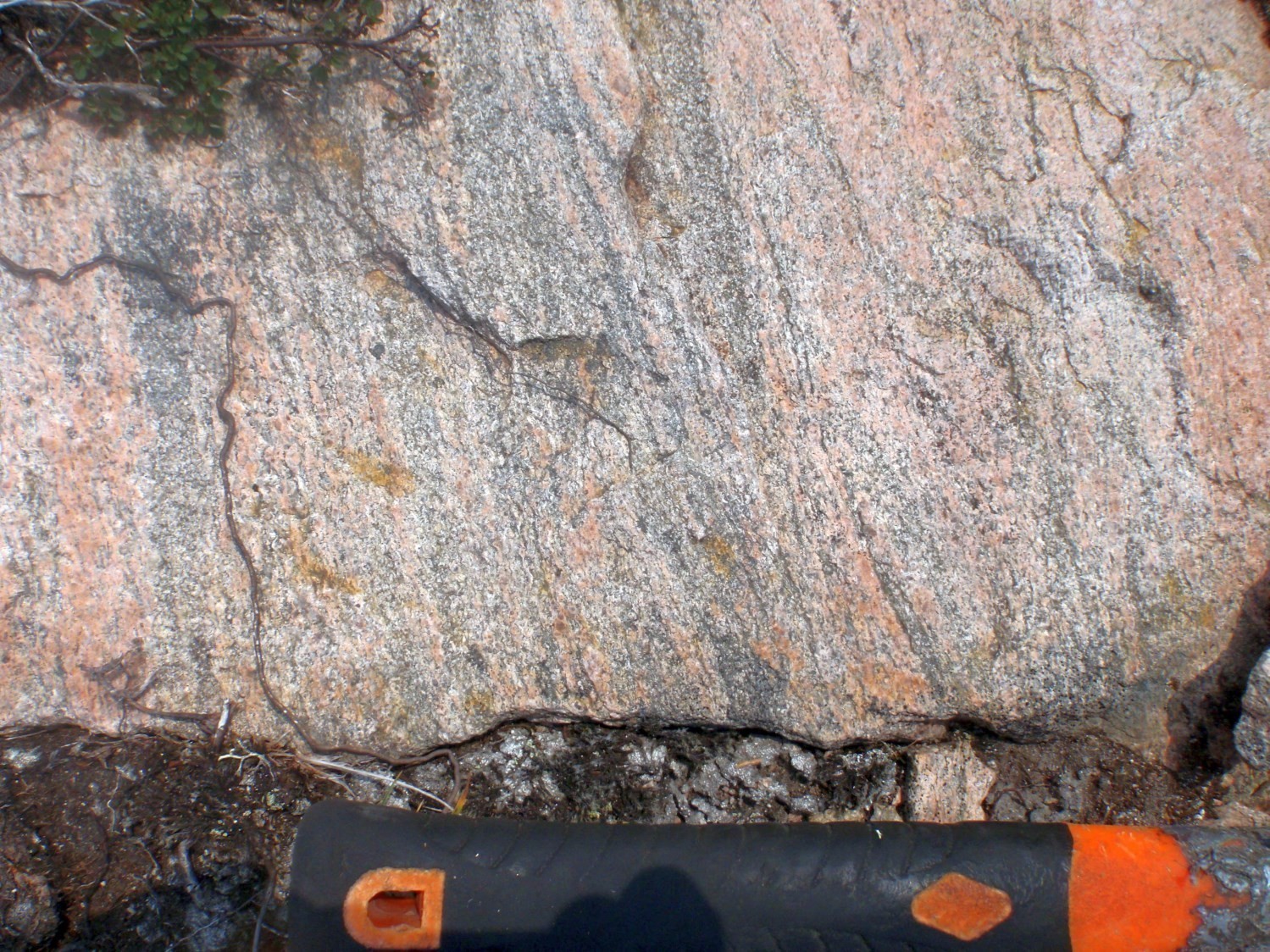 Unit ApPsik1 has a heterogeneous and banded but not gneissic appearance, related to the presence of centimetric to decimetric bands of different compositions. The majority of these are medium grey and granodioritic to monzogranitic, but also include a tonalitic phase and numerous millimetric to decimetric, conformable and unconformable intrusions of dark pink granite, in sharp or diffuse contact. Banding and granitic intrusions are commonly folded, following regional foliation. The tonalitic phase is difficult to differentiate from granodiorite and monzogranite, only the stains revealed the variable distribution of microcline (2-40%). Diorite enclaves are observed on several outcrops. They are decimetric to metric and more fine grained than the rest of the rock which is medium to coarse grained.

In the field, the rock is often described as a gneiss or a migmatite, but the intrusive and coarse-grained appearance is preserved and no clear evidence of partial melting has been observed. Although it is not possible to rule out the possibility that part of the pink bands may represent leucosome, there are several indications that they are more like polyphase intrusions: 1) granite intrusions unconformable to banding do not (or very few) show mafic edges (Sawyer, 2008); 2) the genetic link between the grey phase (tonalite, granodiorite and monzogranitic) and the pink phase (granite) is difficult to establish; 3) geochronological studies show that zircon grains have little evidence of metamorphic overgrowth, suggesting that if there had been partial melting, it would be Archean; and (4) the presence of large zones of homogeneous outcrops of tonalite, granodiorite and monzogranite, similar in all respects to the mixed lithologies observed on heterogeneous outcrops. 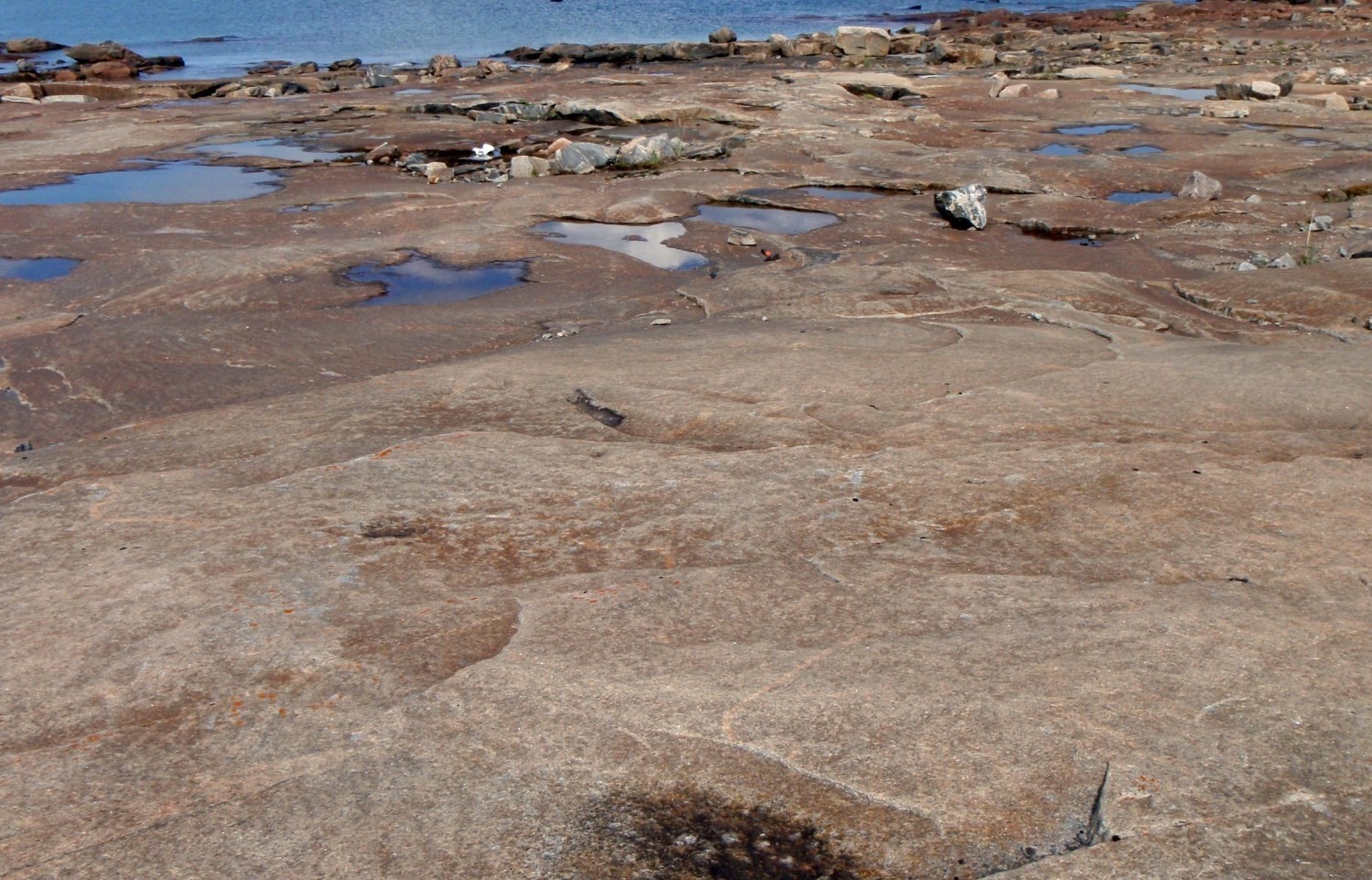 Unit ApPsik2 includes homogeneous zones of the Siimitalik Suite. Because of their great similarity, the distinction between the two subunits is impossible to make in the field. Stains, geochemical analyses and thin sections have revealed the presence of K-feldspar-rich and K-feldspar-poor rocks. Rocks are beige grey in altered surface and medium grey to pink grey in fresh exposure. They are massive or foliated, depending on the zone. They have an intrusive appearance with large grains and partially recrystallized finer-grained crystals between them. Quartz (20-30%) forms large anhedral zones with undulatory extinction, locally in lenses or bands in the most deformed areas. Mafic minerals (5-15%) often form stretched clusters that mould quarzofeldspathic minerals. Biotite, brown to greenish brown, represents the dominant mafic phase but hornblende also occurs in varying proportion (<3%). Plagioclase is weakly to moderately sericitized. 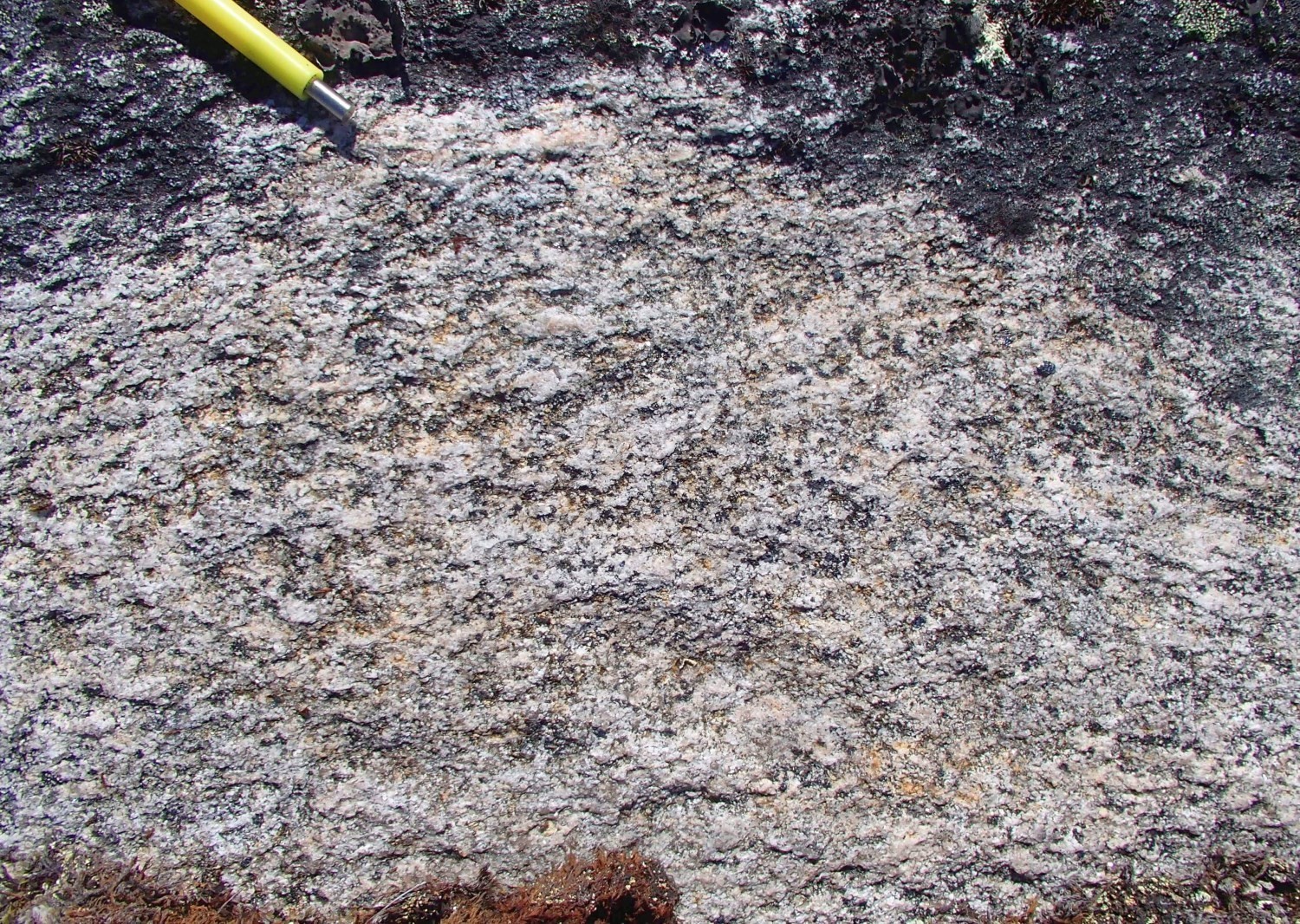 Subunit ApPsik2a is predominantly composed of tonalite and granodiorite (often bordering between the two) but locally includes some quartz diorite. This subunit is characterized by a heterogeneous distribution of K-feldspar (2-17%) into isolated, interstitial or concentrated grains along certain bands. Intergrown textures are common between biotite and plagioclase. There are many accessory minerals that are generally associated with biotite. Epidote (zoisite and pistachite), opaque minerals, apatite and allanite are still present in significant proportions (<3%). Other accessory minerals that are visible include sphene, muscovite, zircon, chlorite, hematite and carbonates. 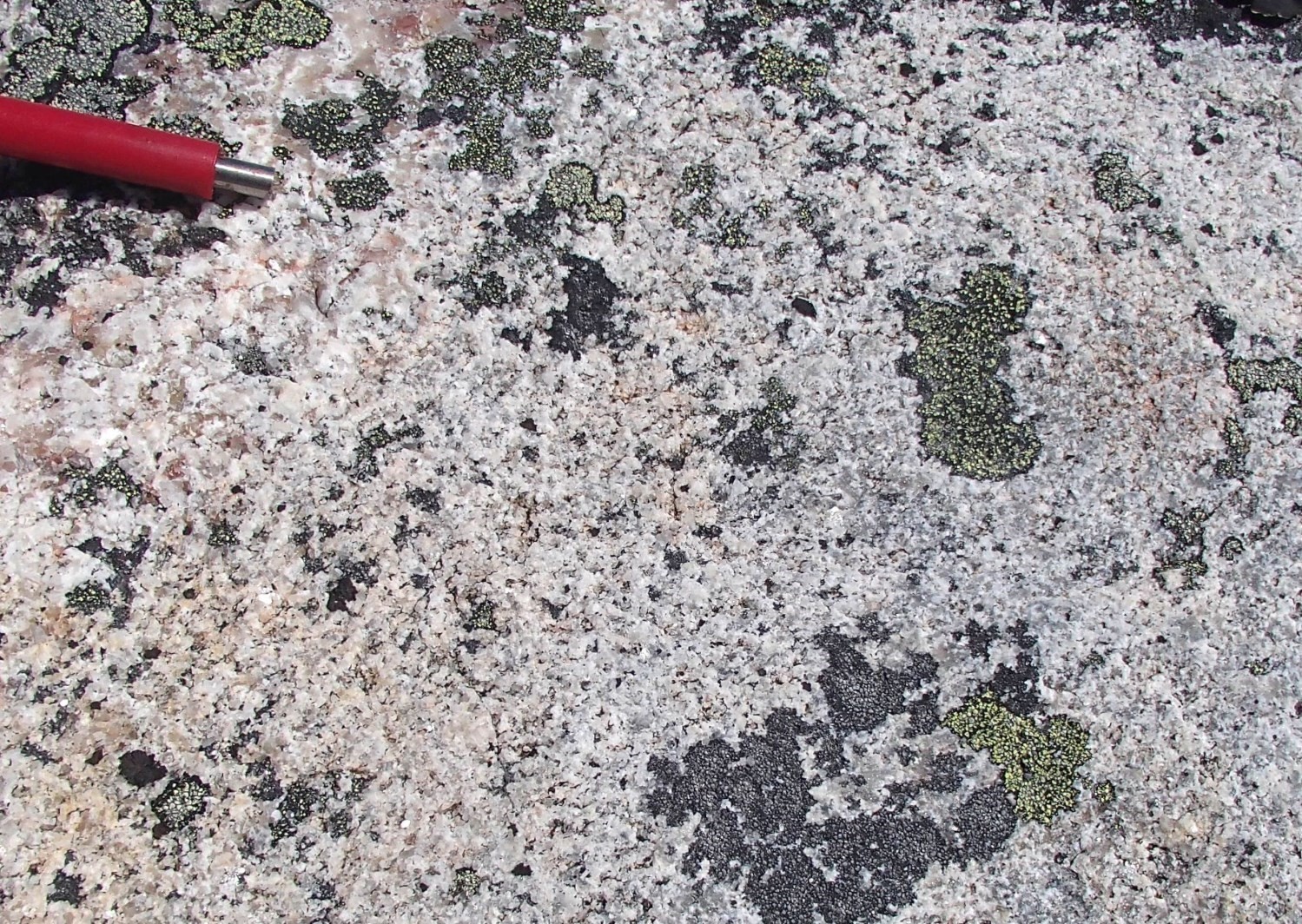 Subunit ApPsik2b is mainly monzogranitic, locally syenogranitic. It is distinguished from the ApPsik2a subunit by the presence of 25 to 40% microcline evenly distributed in the rock. Locally, clinopyroxene was observed in the core of hornblende. Under the microscope, myrmekitic textures are numerous. Accessory minerals are similar to those observed in subunit ApPsik2a, albeit in a smaller proportion. 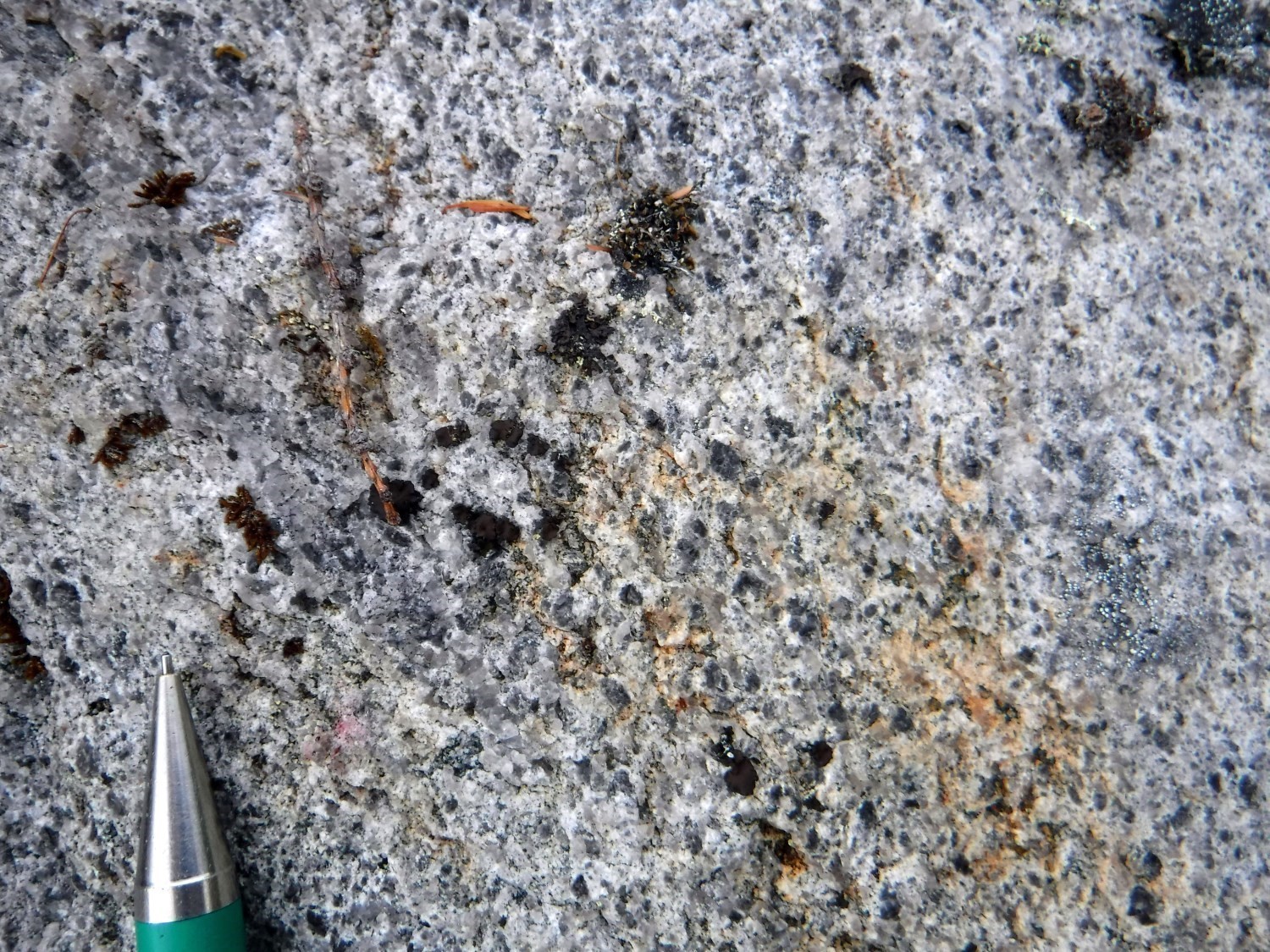 The composition of unit ApPsik3 is variable. The majority is quartz diorite and quartz monzodiorite but also includes tonalite, quartz syenite, monzogranite and granodiorite. These rocks are characterized by a speckled white and black alteration patina due to the presence of ferromagnesian mineral clusters (15-25%) of hornblende and biotite. They are medium grained, homogeneous and massive, foliated or lineated. They also occur as decimetric diffuse clusters or masses within other units of the Siimitalik Suite. Like subunit ApPsik2a, microcline is unevenly distributed (3-25%) and is interstitial, as inclusions in plagioclase or as isolated grains. The unit also contains a large amount of the same accessory minerals mentioned in the ApPsik2a subunit. Plagioclase is weakly sericitized. Rocks of the ApPsik3 unit have preserved their igneous appearance even though partial recrystallization is present on the rims of the grains. Quartz (10-22%) has strong undulatory extinction and begins to recrystallize with a chessboard texture. Perthites and myrmekites are also observed in thin section.

The Siimitalik Suite covers a large area generally associated with positive magnetic anomalies, oriented N-S to NW-SE, in the Henrietta Lake (sheet 24H), Brisson Lake (sheet 24A) and Koroc River (sheet 24I) areas. It is limited to the west by the Moonbase Shear Zone (MSZ) and to the east by the Blumath Deformation Corridor (BDC). Units ApPsik1 and ApPsik2 form strips several kilometres wide followed over several kilometres, while unit ApPsik3 forms klippes of much smaller size.

The ancient Archean ages of the Siimitalik Suite suggest that the separated part of the Superior Province does not continue east of the De Pas Batholith since no potassic rock of this age has been identified west of the Labrador Trough.

The Siimitalik Suite is one of the oldest units in the eastern part of the Core Zone. His relationship with gneiss of the Kangiqsualujjuaq Complex (ApPkan) is misunderstood, as contact is locally diffuse. The line between these two units is difficult to draw precisely. The Siimitalik Suite is cut by mafic-ultramafic intrusions of the Nuvulialuk Suite (pPnuv) and granitic intrusions of the Qarliik Suite (pPkiq).