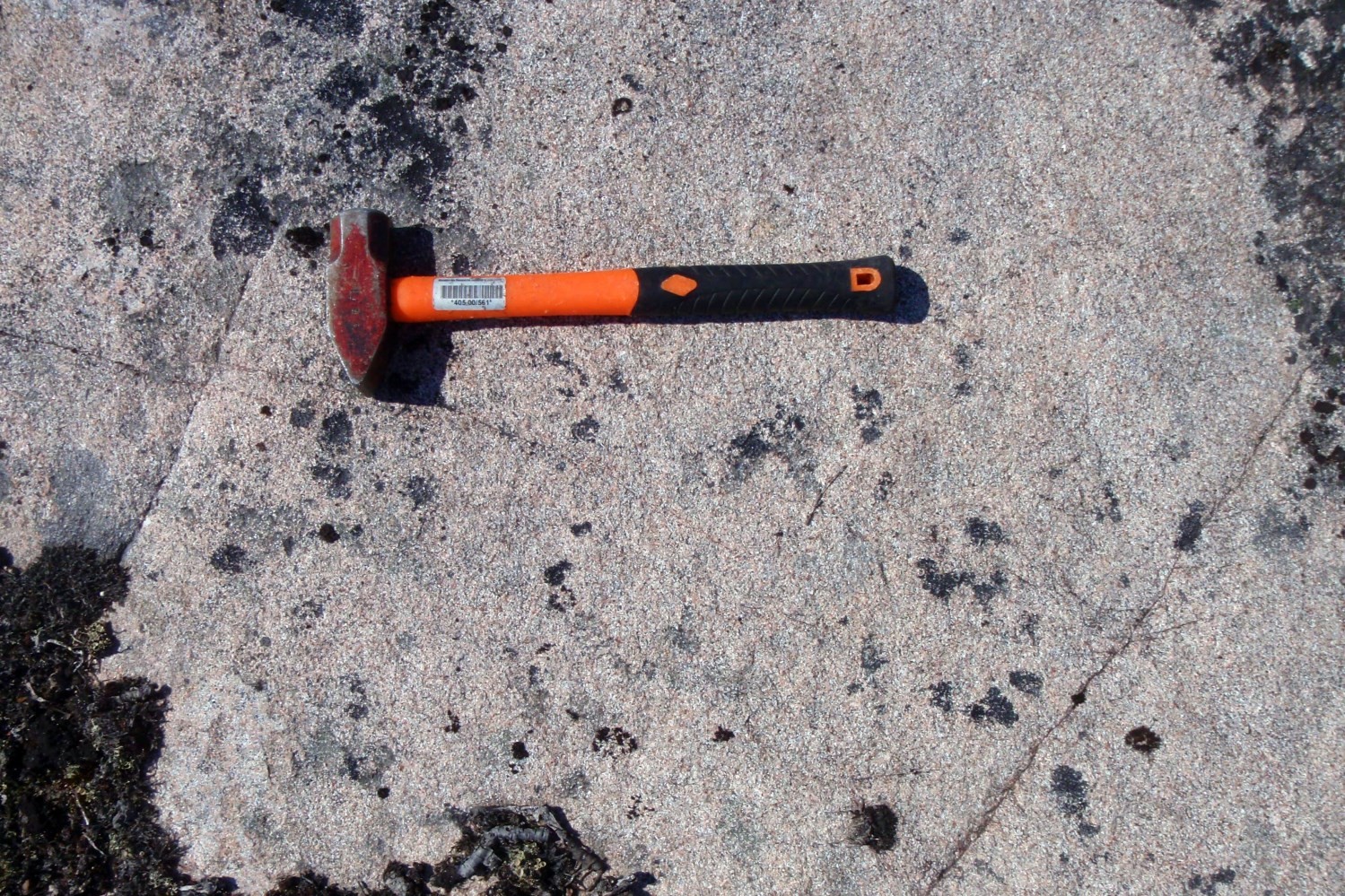 The Qarliik Suite was introduced by Mathieu et al. (2018) in the Koroc River and Point Le Droit area to group all of the Paleoproterozoic granite intrusions located between the Moonbase Shear Zone (MSZ) and the Blumath Deformation Corridor (BDC). These intrusions were previously assigned to the Baudan Complex (Verpaelst et al., 2000) to define a granitic gneiss and granitic intrusion unit. This unit’s name was not subsequently used by Simard et al. (2013) and Lafrance et al. (2015) who preferred to distinguish gneiss from late intrusions. The grey gneiss of tonalitic to granitic composition were then assigned to the Ungava Complex while intrusions were grouped by these authors in the Dancelou Suite. However, as part of the southeastern Churchill Province (SECP) synthesis, different lithotectonic domains were identified and it appears that units observed east of the MSZ are distinct from those identified in the Kuujjuaq and Ungava Bay area west of this fault. New units have thus been defined, including the Qarliik Suite, which includes later intrusive rocks. 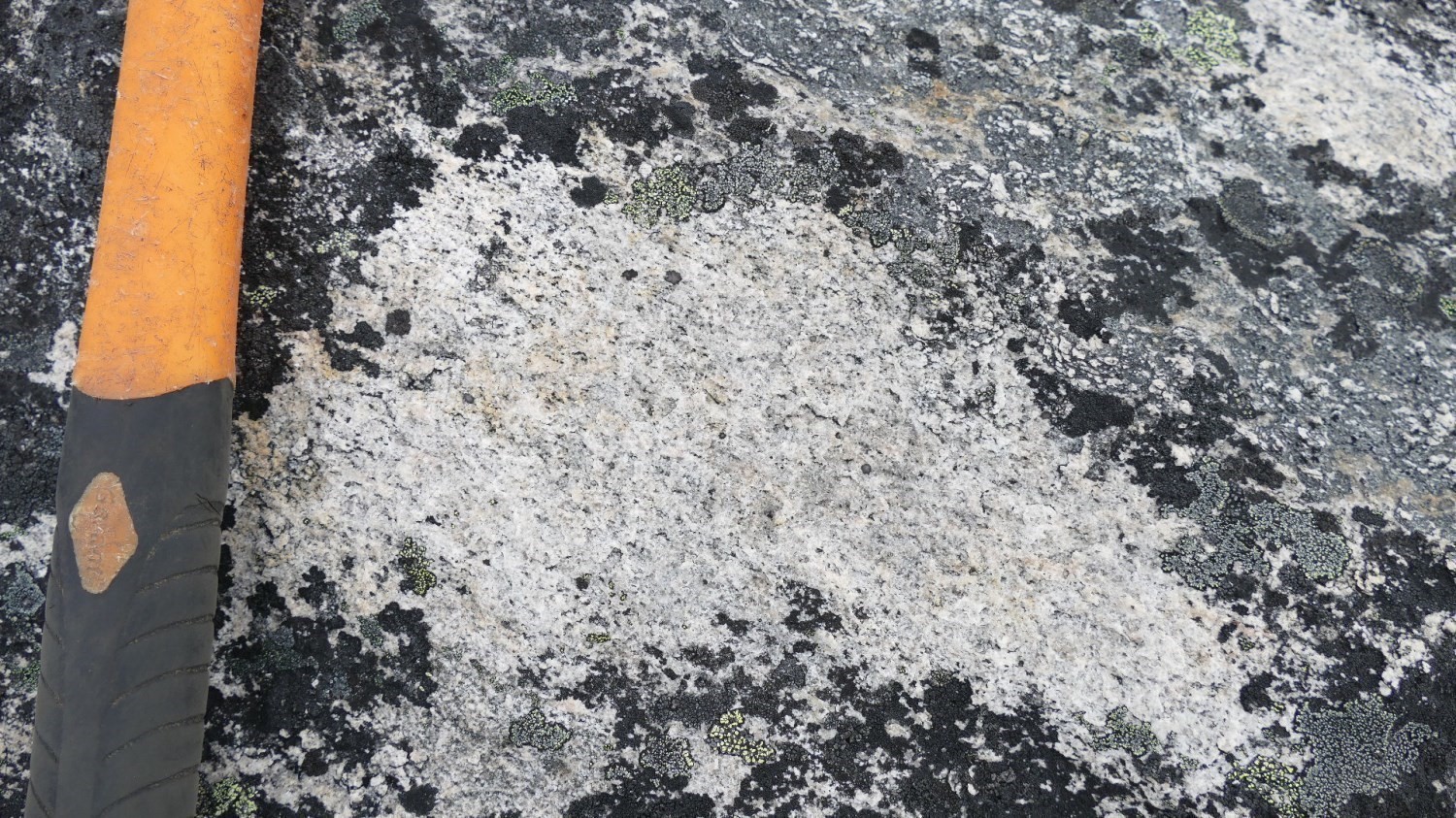 Granite of unit pPqik1 is homogeneous, beige or light grey, little or not magnetic and medium to fine grained. It has preserved an igneous appearance, but partial recrystallization is observed in thin section, particularly on grain edges. Foliation (or lineation) is generally well developed and defined by the alignment of mica and the beginning of orientation of the matrix, especially quartz (25-30%). The latter forms local lenses or bands in the most deformed zones. It has undulatory extinction and the rim shows a dynamic recrystallization budding. K-feldspar (30-35%) is perthitic and often rimmed with myrmekites. Mafic minerals (5–10%) are represented by brown biotite, muscovite and chlorite (alteration of biotite). Plagioclase is weakly to moderately sericitized. Accessory minerals include epidote, allanite, opaque minerals, zircon (as inclusions in biotite) and sphene. 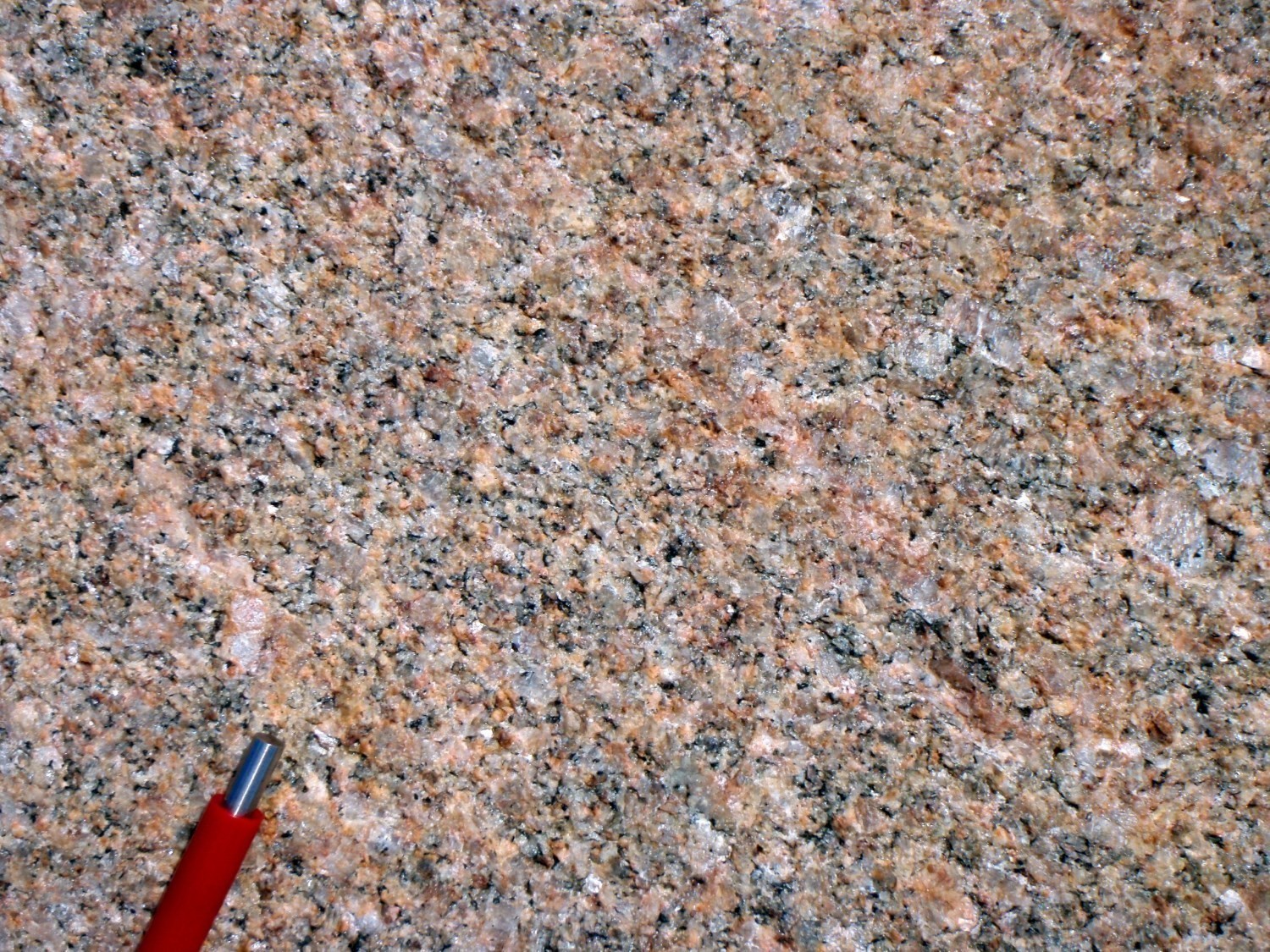 Granite in this unit is characterized by its light to dark pink colour and generally medium to coarse grain size. It is homogeneous, of variable magnetic susceptibility, even grained and massive to moderately foliated. When present, foliation is marked by the alignment of mafic minerals and the beginning of orientation of quartz. Decimetric pPqik3 granite clusters and dykes are observed in several locations and are interpreted as a late phase of the unit. The igneous appearance is well preserved with very little recrystallization at the grain edges. The felsic phases are anhedral, and quartz (22–30%) forms zones with undulatory extinction that begin to make subgrains.

Granite contains between 1 and 12% ferromagnesian minerals consisting of brown to green biotite flakes (variably chloritized), thin hematite dust and local hornblende. It also contains up to 2% muscovite flakes and shows low to moderate sericitization of plagioclase. Mafic minerals are scattered throughout the rock or form millimetric to centimetric clusters. Myrmekites are common and K-feldspar (30-45%) is dominated by microcline, which is locally perthitic and with quartz, plagioclase and muscovite inclusions. Microcline is a little bit coarser-grained than the other mineral phases. Accessory minerals can be quite numerous and consist, in order of importance, of epidote, allanite, opaque minerals, sphene, apatite and zircon (as inclusions in biotite). 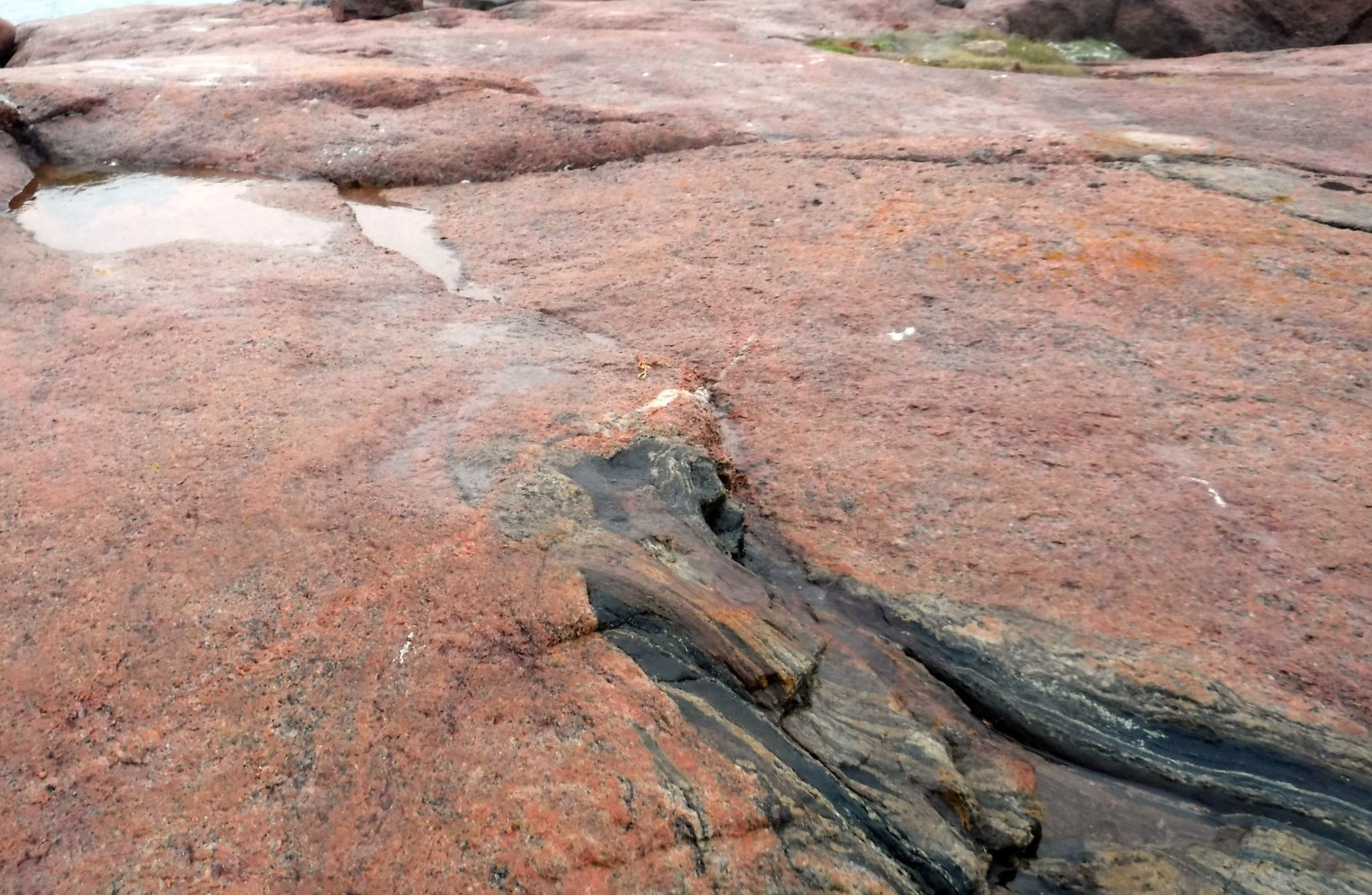 Pegmatite comes in three forms: dykes cutting host rocks, metric to kilometric masses, and clusters or dykes in unit pPqik2 granite. Their appearance is generally massive, but some pegmatites are foliated and folded. It is pink or pink-black-white spotted. Pegmatite contains between 20 and 40% quartz but is locally much richer, even resembling quartz veins. Quartz forms large zones with undulatory extinction. Microcline (25-38%) is perthitic and myrmekites are numerous. Plagioclase is locally sericitized and a slight recrystalization is observed at the grain edge. Pegmatite contains between 5 and 12% ferromagnesian minerals, which form centimetric clusters distributed heterogeneously in the rock. Biotite dominates mafic minerals and muscovite is almost always associated with it. Accessory minerals are abundant and represented by epidote, allanite, apatite, magnetite, sphene and zircon.

The Qarliik Suite typically consists of elongated intrusions 2 to 20 km long and less than 3 km wide. A greater intrusion 23 km by 15 km was observed in the northeast part of the Core Zone. The Qarliik Suite is limited to the west by the Moonbase Shear Zone (MSZ), which ends north against the Rivière George Shear Zone (RGSZ), and east by the Blumath Deformation Corridor (BDC). It is more prevalent in the Koroc River and Point Le Droit areas (Mathieu et al., 2018).

Three datings in each of the units in the Qarliik Suite gave rise to ages around 1830 Ma, indicating that these intrusions occurred towards the end of erection of the Torngat Orogen (1885-1800 Ma; Charette, 2016), which affected the eastern part of the Core Zone.

Granitic intrusions of the Qarliiq Suite cut Archean units of the Kangiqsualujjuaq Complex (ApPkan) and the Baudan Suite (nAban). Its relationship with the Siimitalik Suite (ApPsik) is more difficult to identify since this unit also includes a pink granitic phase similar to that of unit pPqik2, although the first phase is Archean. It is possible that some of the ApPsik2 pink granites actually belong to the Qarliik Suite.