The Inuluttalik Suite was introduced by Lafrance et al. (2015) in the Henrietta Lake area to group hypersthene intrusive rocks observed in the western portion of the Torngat Orogen. The unit extends southward in the Brisson Lake area (Lafrance et al., 2016) and northward in the Koroc River and Point Le Droit areas (Mathieu et al., 2018).

The Inuluttalik Suite commonly contains 5 to 15% centimetric to decimetric enclaves of hypersthene tonalitic gneiss (ApPsuk2) and gabbro or gabbronorite (ApPsuk6) of the Sukaliuk Complex. It appears to consist of several intrusive phases that cut each other; these numerous intrusions give a diffuse banding appearance to outcrops locally. Magnetism of these rocks is variable, ranging from very weak to strong. Only two units were able to be distinguished on the scale of our work: an enderbite unit (pPina1) and a charnockite unit (pPina2). 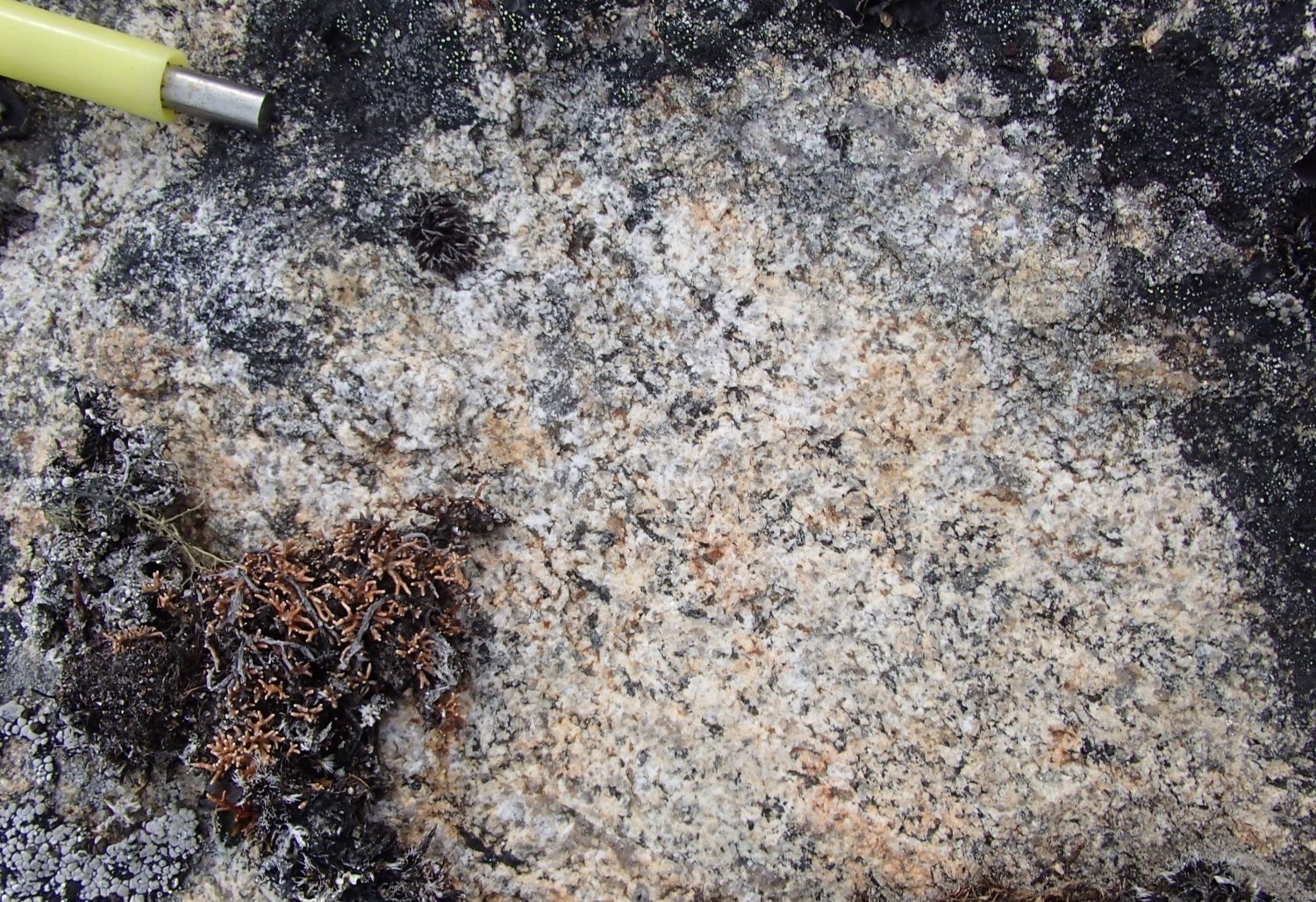 Unit pPina1 consists predominantly of enderbite but also contains a small proportion of hypersthene quartz diorite. It is characterized by medium to coarse grain size, a greenish grey fresh surface, locally brown sugar, and a massive to weakly foliated texture. However, subhorizontal stretching lineation is widespread and manifests itself in the formation of quartz rods with undulatory extinction. There are other more coarse-grained intrusions ranging in composition from enderbite to charnockite to granite. These intrusions usually occur as more or less diffuse centimetric bands. In thin section, well-preserved, igneous textures are observed with the beginning of recrystallization at grain edges. Enderbite contains 18-30% quartz, <5% K-feldspar, interstitial or as exsolution in plagioclase, and 3-13% mafic minerals. These are mainly represented by hypersthene, biotite in small brown to red flakes, clinopyroxene and, more locally, hornblende. These mafic minerals usually form long, discontinuous clusters that look like schlierens. Orthopyroxene is commonly disaggregated and serpentinized (iddingsite). The main accessory minerals observed are apatite, opaque minerals (magnetite), epidote, zircon and carbonates. 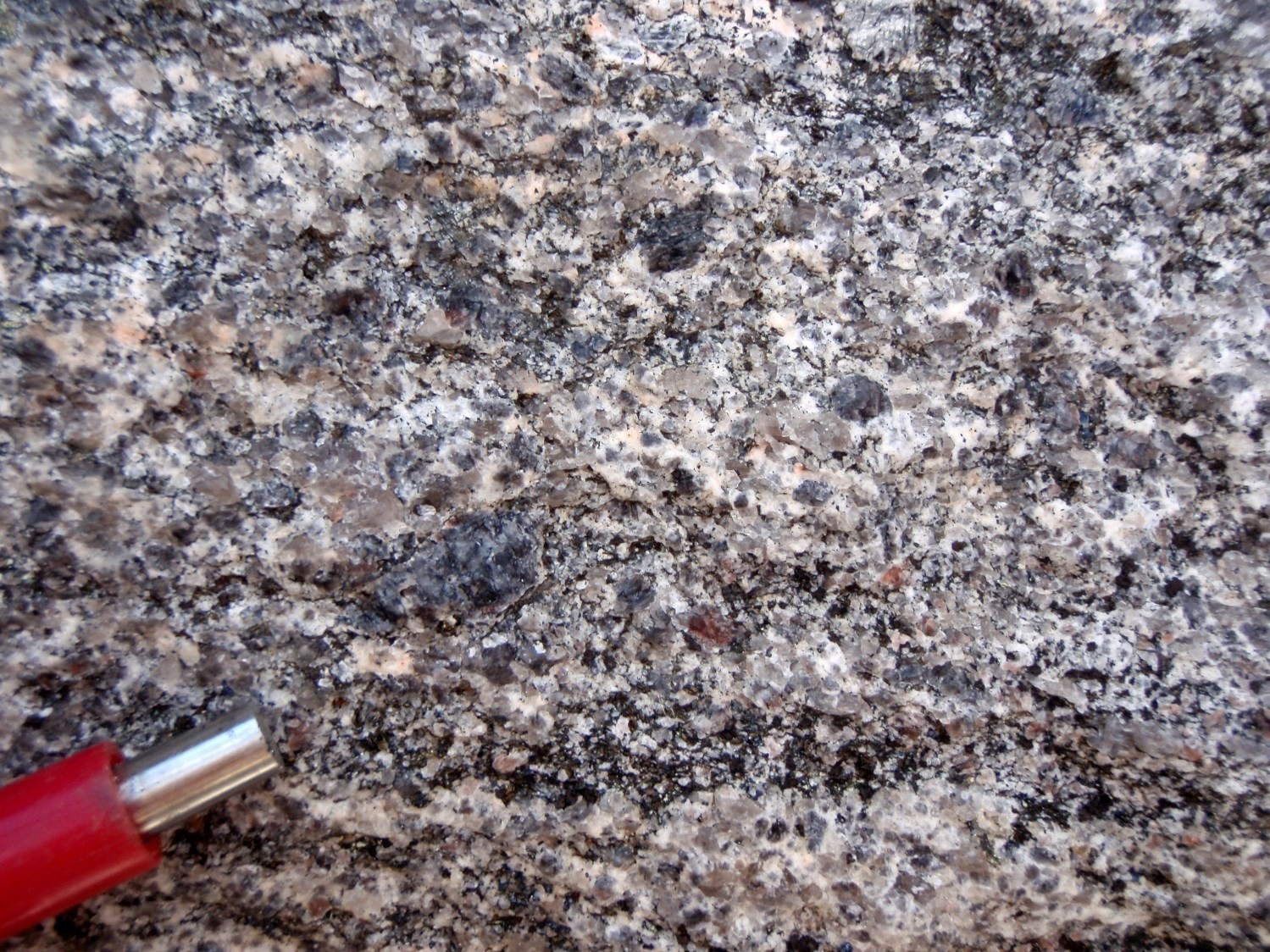 Locally, enderbite is retrograded to the amphibolite facies. The rare remnants of orthopyroxene are then completely transformed into a mixture of serpentine, amphiboles and chlorite. These tonalites, assigned to subunit pPina1a, are purple coloured and contain very dark quartz and burgundy plagioclase. Other mineral and structural characteristics are similar to the pPina1 enderbite. 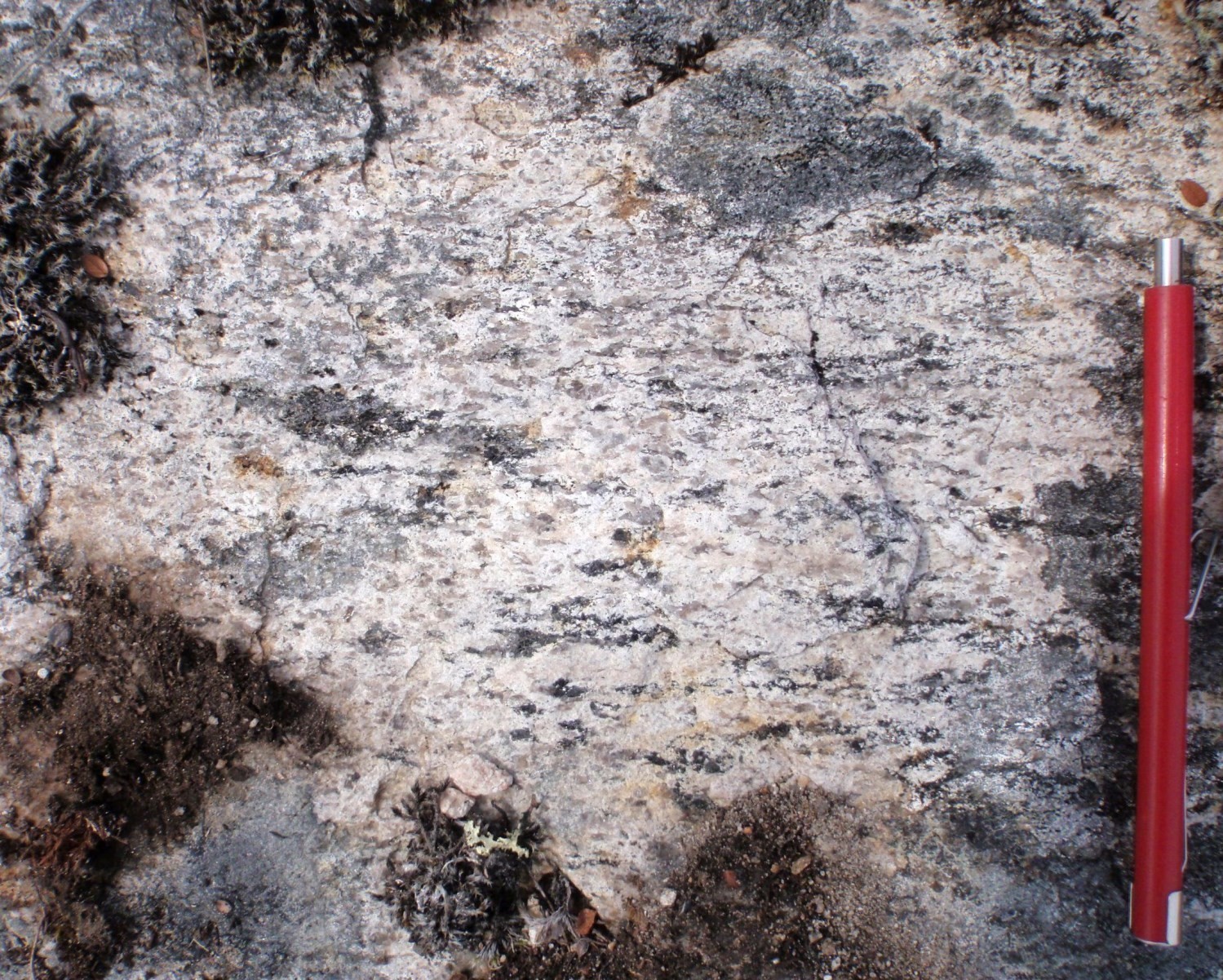 In addition to forming kilometric intrusive masses, rocks of unit pPina2 also occur as millimetric to decimetric intrusions, pink or brown sugar in the pPina1 enderbite and in rocks of the Sukaliuk Complex. In outcrop, the rock is easily confused with the brown sugar-coloured phases of the pPina1 enderbite. However, it contains 20 to 45% K-feldspar, which is generally not twinned in thin section. Charnockite often shows an unequal distribution of minerals that tend to form monomineralic centimetric clusters. It contains 20 to 25% quartz with strong undulatory extinction. Mafic minerals (8-20%) consist of brown to red biotite, orthopyroxene and hornblende with local clinopyroxene. Orthopyroxene is replaced to varying degrees by hornblende or iddingsite. The rock is partially recrystallized along grain edges. The main accessory minerals are opaque minerals, apatite, zircon, sphene, epidote and allanite. 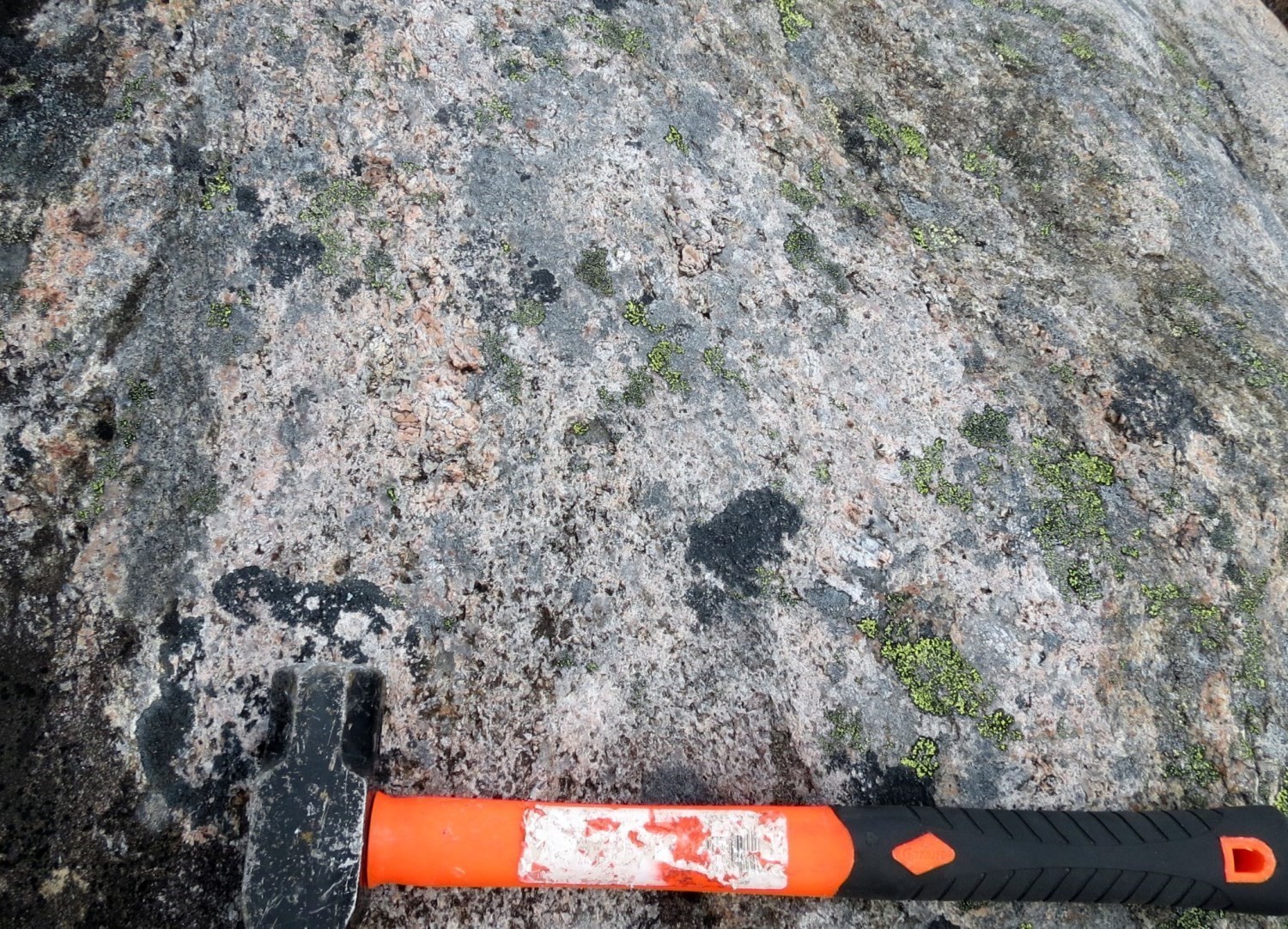 Like the pPina1 enderbite unit, charnockite and opdalite are locally retrograded to the amphibolite facies. These intrusive rocks are homogeneous, medium grained and light to medium pink. They are foliated and show lineations, locally protomylonitic on the edge of shear zones. The main expression of deformation is the alignment of mafic minerals (5-12%) consisting of brown biotite and muscovite flakes. Quartz (20-27%) is smoked and forms large zones with undulatory extinction, lenticular in places. Plagioclase and microcline (15-50%) show partial recrystallization between grains. Subunit pPina2a contains the same accessory minerals as unit pPina2. 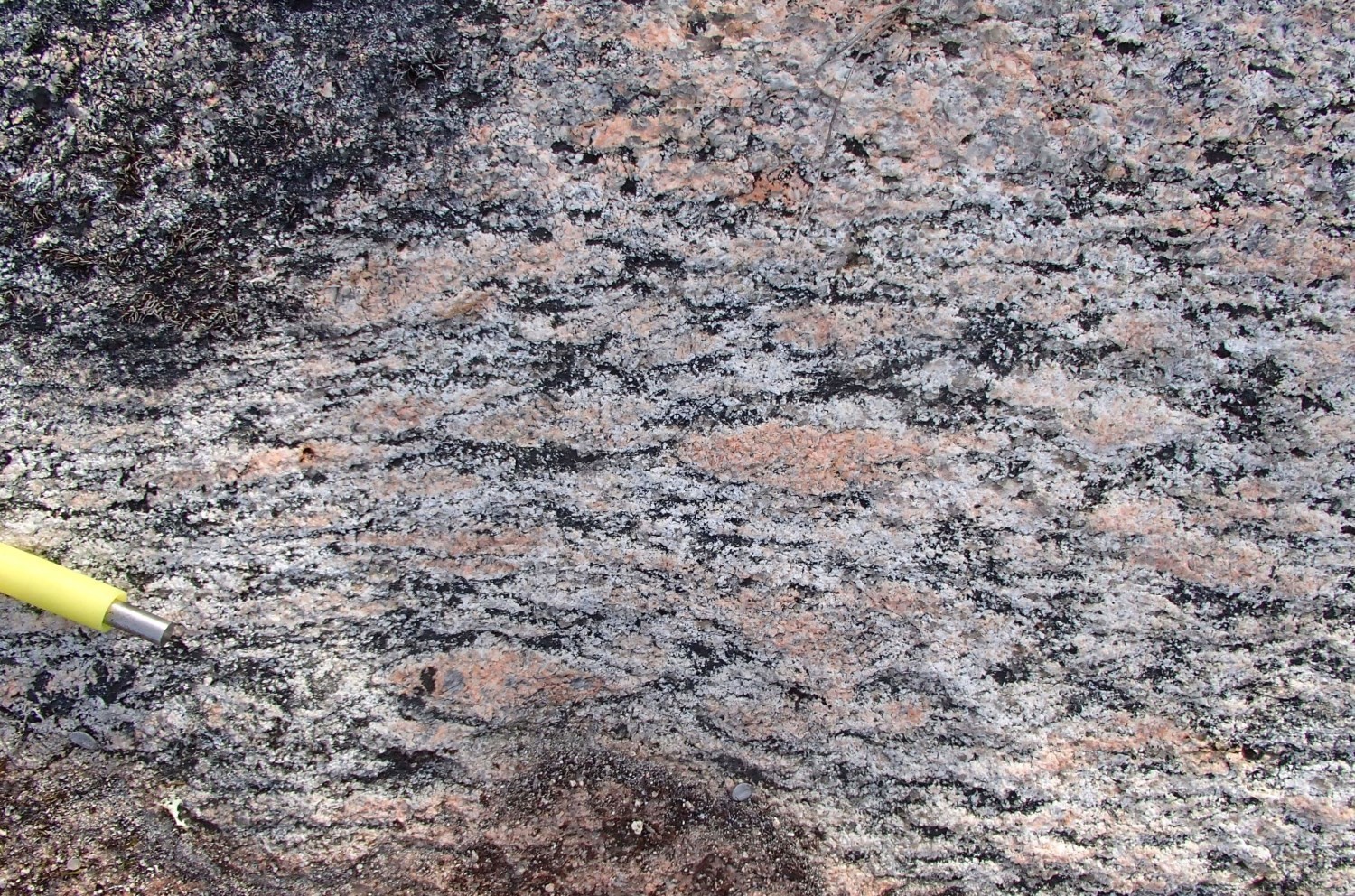 Subunit pPina2b is characterized by the presence of 15 to 25% microcline porphyroclasts 0.5 to 3 cm long, giving the rock a white, pink and black speckled appearance. Its composition is generally monzogranitic, but also includes granodiorite, farsundite and monzodiorite. The rock is medium grained and partially recrystallized. Deformation is often strong (protomylonitic), marked by the alignment of quartz into anhedral bands with checkerboard extinction, the presence of recrystallization tails on either side of coarse feldspar crystals, and the arrangement of mafic minerals into anastomosed laminas that mould quartzofeldspathic lenses. K-feldspar is also present in the matrix. Porphyroclasts are perthitic, with myrmekitic rims and contain aligned inclusions of plagioclase, quartz and biotite. Mafic minerals (10-25%) are biotite, hornblende and locally hypersthene. Accessory minerals observed in thin section include opaque minerals, muscovite, apatite, epidote, allanite and garnet. Plagioclase and biotite are locally altered, respectively sericitized and chloritized. 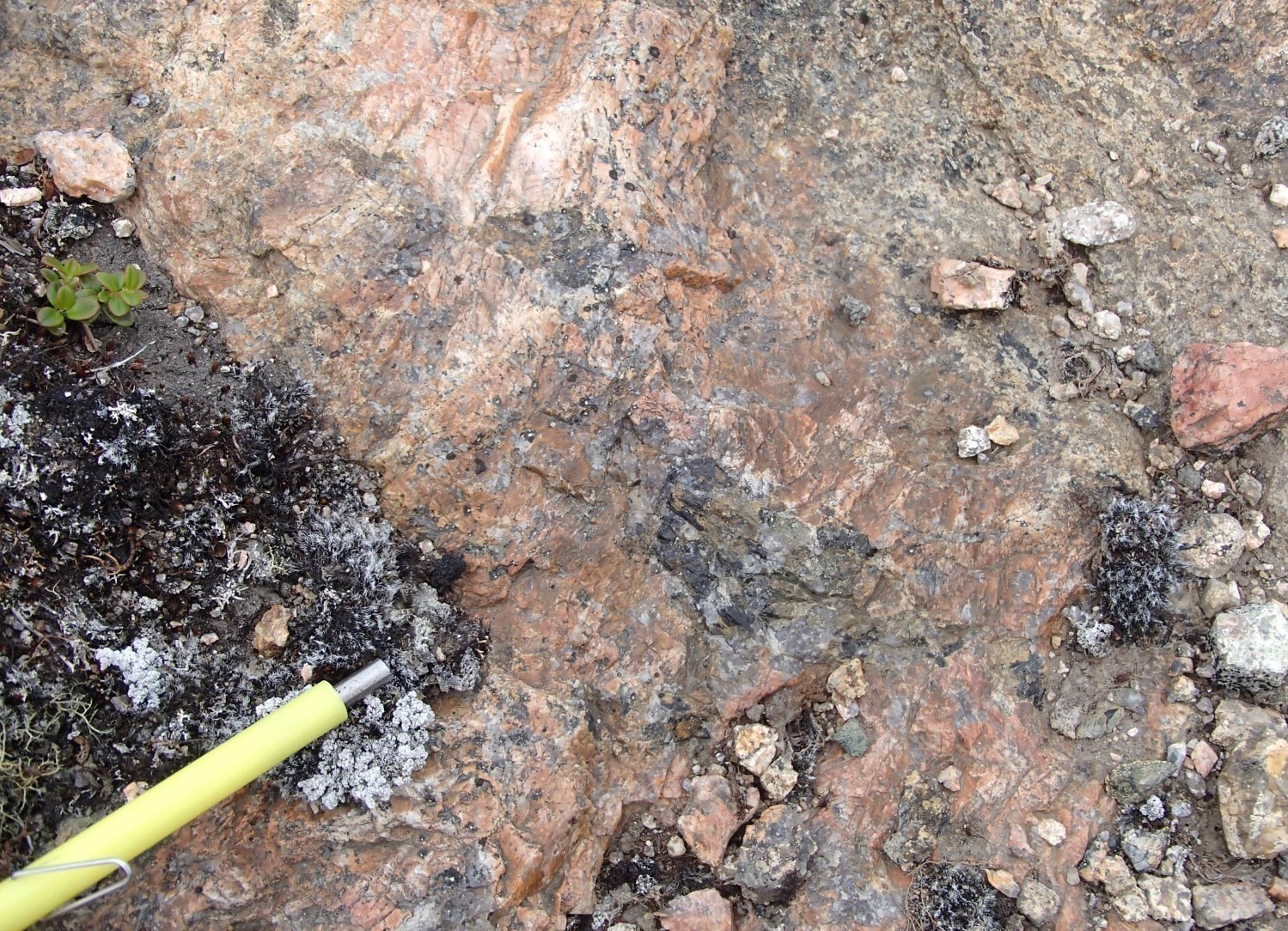 The majority of the outcrops locally consist of pegmatitic intrusive rocks that cut all the units of the Inuluttalik Suite. The rock is leucocratic and massive or marked by lineation and dark pink. It contains between 2 and 5% mafic minerals (biotite ± hornblende ± hypersthene), approximately 25% quartz and some muscovite and magnetite. 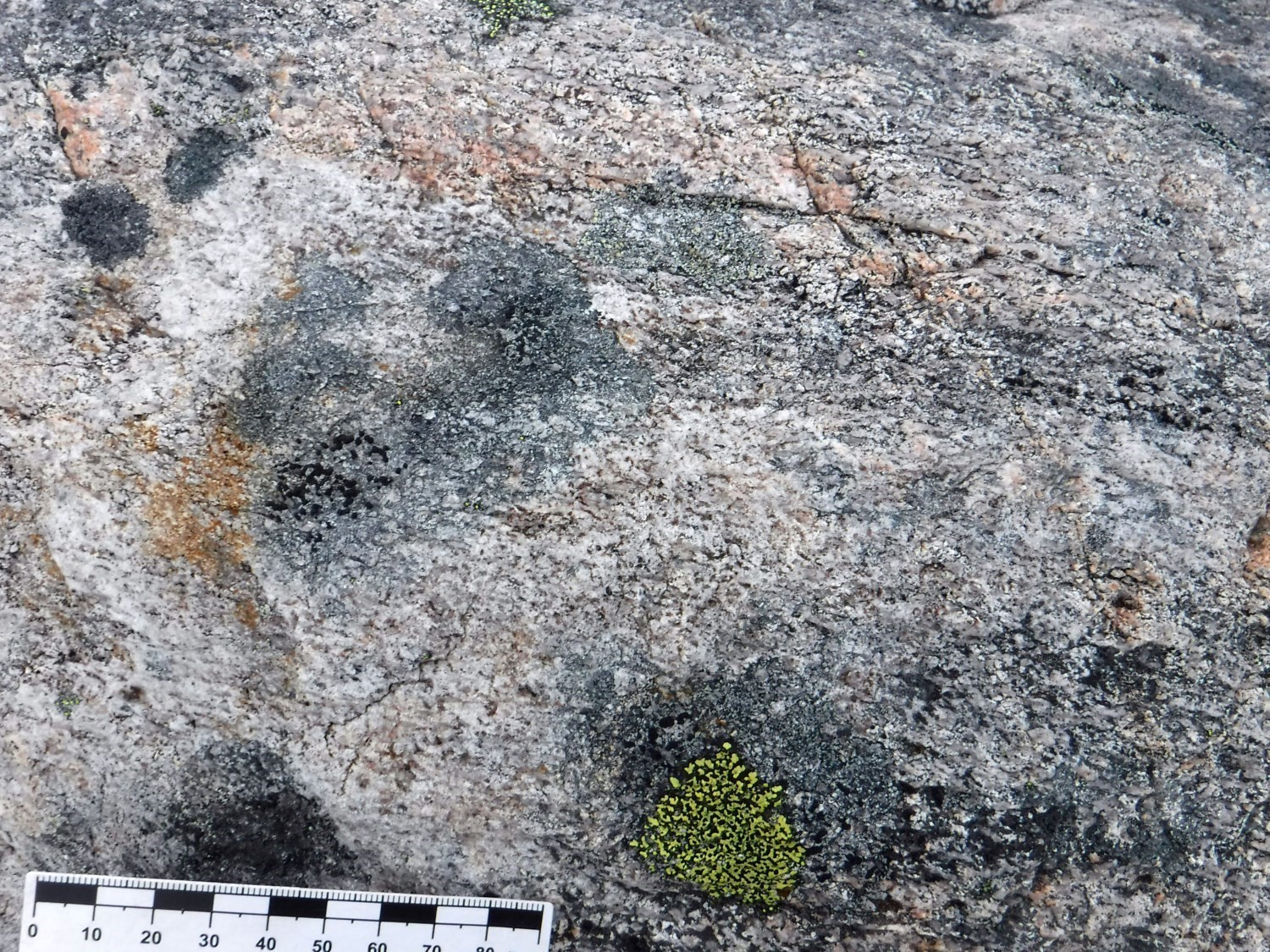 Quartz syenite is medium grained, pinkish grey in fresh exposure with a light grey to beige patina. It contains 5-15% quartz, >70% K-feldspar and 2-20% mafic minerals. These include clinopyroxene (augite), hornblende and magnetite, with lower proportions of biotite and apatite. K-feldspar is perthitic with intergrowing lobed edges.

The Inuluttalik Suite forms elongated plutons parallel to the regional structural grain that intrude into gneiss of the Sukaliuk Complex and that are located in the western part of the Torngat Orogen. The different units form hectometre to decakilometre wide intrusions over a length ranging from 1 km to nearly 100 km. Subunits pPina2c and pPina2d are much smaller and represent only two intrusions, respectively 400 m by 4 km and 1.5 km by 9 km, located in the northern portion of the Koroc River area (sheets 24I15 and 24I10).

A sample of charnockite and a sample of inderbite both returned a Paleoproterozoic age, interpreted as the crystallization age, as well as Archean inherited ages, interpreted as related to the presence of gneiss enclaves of the Sukaliuk Complex within intrusive rocks of the Inuluttalik Suite. Moreover, it was generally difficult to distinguish the two units in the field given the poor quality of outcrops (lichen cover) and the great similarity between lithologies. Contact between the two units appears to be diffuse in in fresh exposure. However, stains allow us to highlight textural differences.

In addition, two samples collected in the Henrietta Lake area in the summer of 2013 were sent to the Geological Survey of Canada (Corrigan et al., 2018) for geochronological datings. The ages presented in the table below are preliminary, but several Archean age populations have also been brought to light.

The Inuluttalik Suite includes hypersthene felsic intrusive rocks that could represent evolved products of partial melting of gneiss of the Sukaliuk Complex, or synkinematic to late-kinematic plutons. Charette (2016) mentioned that the lack of texture indicating partial melting in the Sukaliuk Complex could be linked to their destruction during high temperature transpression deformation. The presence of coarse-grained leucocratic bands in gneiss, the close spatial association between the two units, and the presence of numerous biotite flakes inside intrusive rocks of the Inuluttalik Suite suggest that the Torngat Orogenesis could represent a migmatitization episode associated with extraction and accumulation of anatectic liquids.