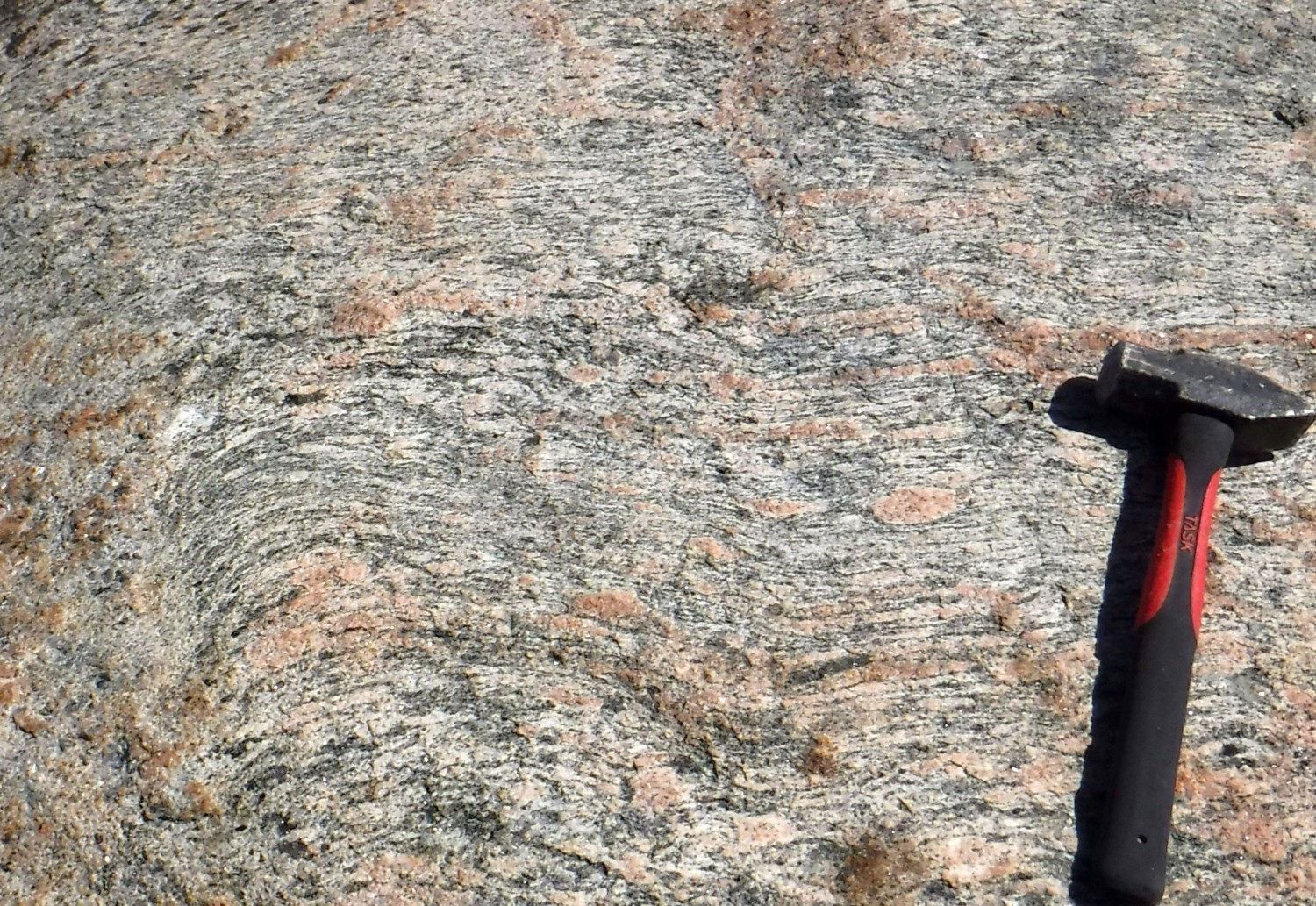 The term Baudan Complex was first used by Verpaelst et al. (2000) to define a unit of granitic gneiss and granitic intrusions. This unit name was not subsequently used by Simard et al. (2013), Lafrance et al. (2014, 2015, 2016) and Charette et al. (2016), who preferred to distinguish regional gneiss zones from late intrusions. The grey gneiss of tonalitic to granitic composition were then assigned to the Ungava Complex. However, in the synthesis of the southeastern Churchill Subprovince (SECP), different lithotectonic blocks were identified and it appears that the gneiss observed east of the Moonbase Shear Zone (MSZ) are distinct from those identified in the Kuujjuaq and Ungava Bay area west of the Rivière George Shear Zone (RGSZ). The Kangiqsualujjuaq Complex has been redefined to consolidate all of the grey, tonalitic to granitic gneiss located between the MSZ in the west and the Blumath Deformation Corridor (BDC) in the east. The Kangiqsualujjuaq Complex thus includes some of the outcrops previously assigned to the Baudan Complex, those of grey granitic gneiss, but excludes the later intrusive rocks, which were assigned to the Qarliik Suite (Mathieu et al., 2018) and the porphyroclastic monzogranite outcrops, which now represent the Baudan Suite as defined by Mathieu et al. (2018). 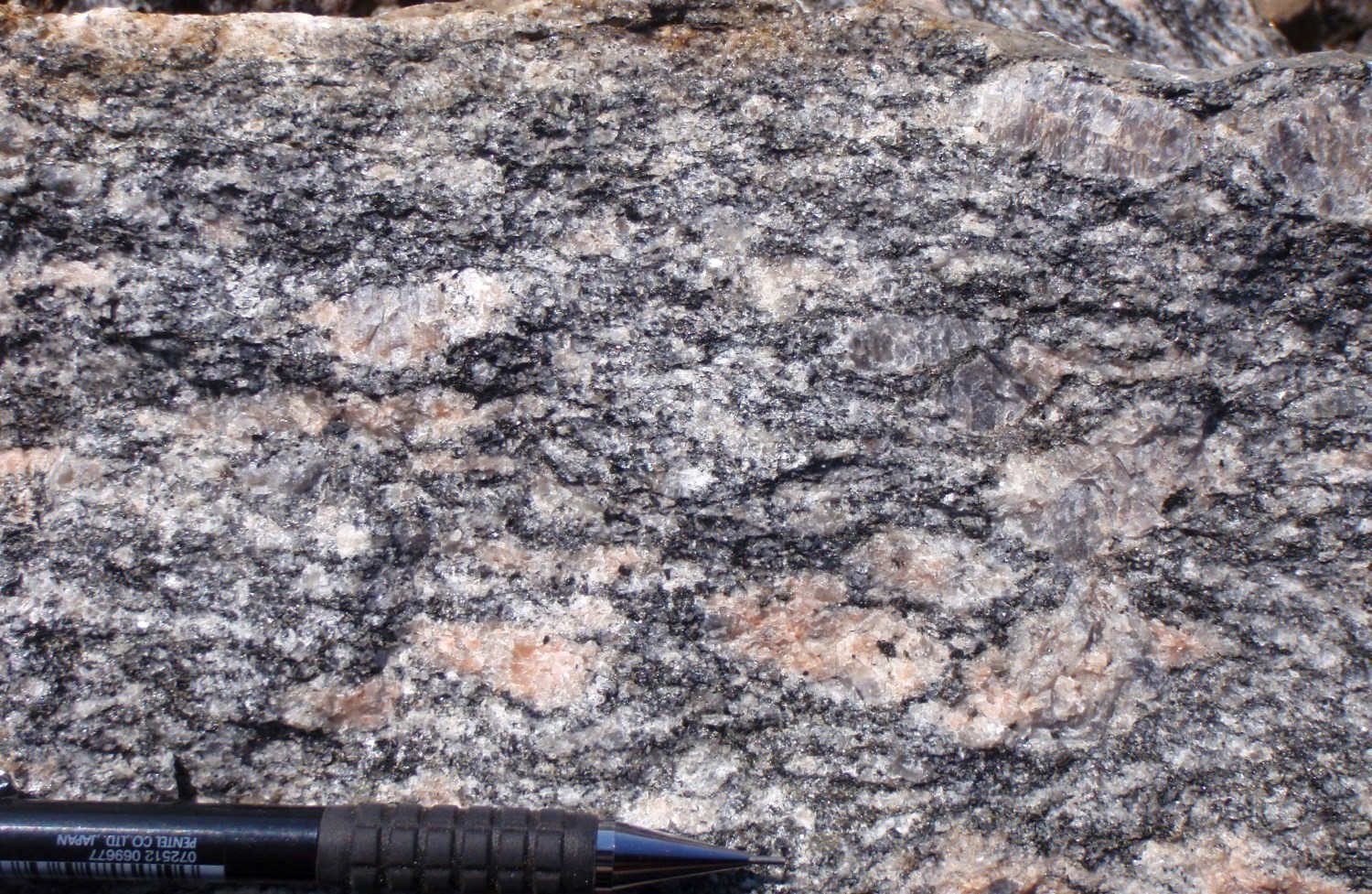 Unit nAban1 is predominantly composed of monzogranite but also has a small proportion of quartz monzonite and syenogranite. Monzogranite is strongly foliated (and/or lineated) and locally takes on the appearance of an augen gneiss. The rock is coarse grained, medium pink, black and white speckled, but the minerals form fine-grained recrystallized monomineralic clusters, particularly on the grain edges. It is magnetic and characterized by the presence of 25 to 55% pink microcline porphyroclasts 0.5 to 3 cm long, most often recrystallized and lenticular in shape. Quartz tends to align in thin discontinuous bands or lenses. It shows a strong undulatory extinction and its edges are commonly indented. Mafic minerals (15%) form lenticular clusters and laminaes that mould felsic mineral clusters. Hornblende and biotite occur in similar proportions. Microcline is often perthitic and rimmed with myrmekites. Accessory minerals are numerous and commonly coarse grained. The main ones are allanite, epidote, magnetite, sphene, apatite, muscovite, zircon and chlorite. 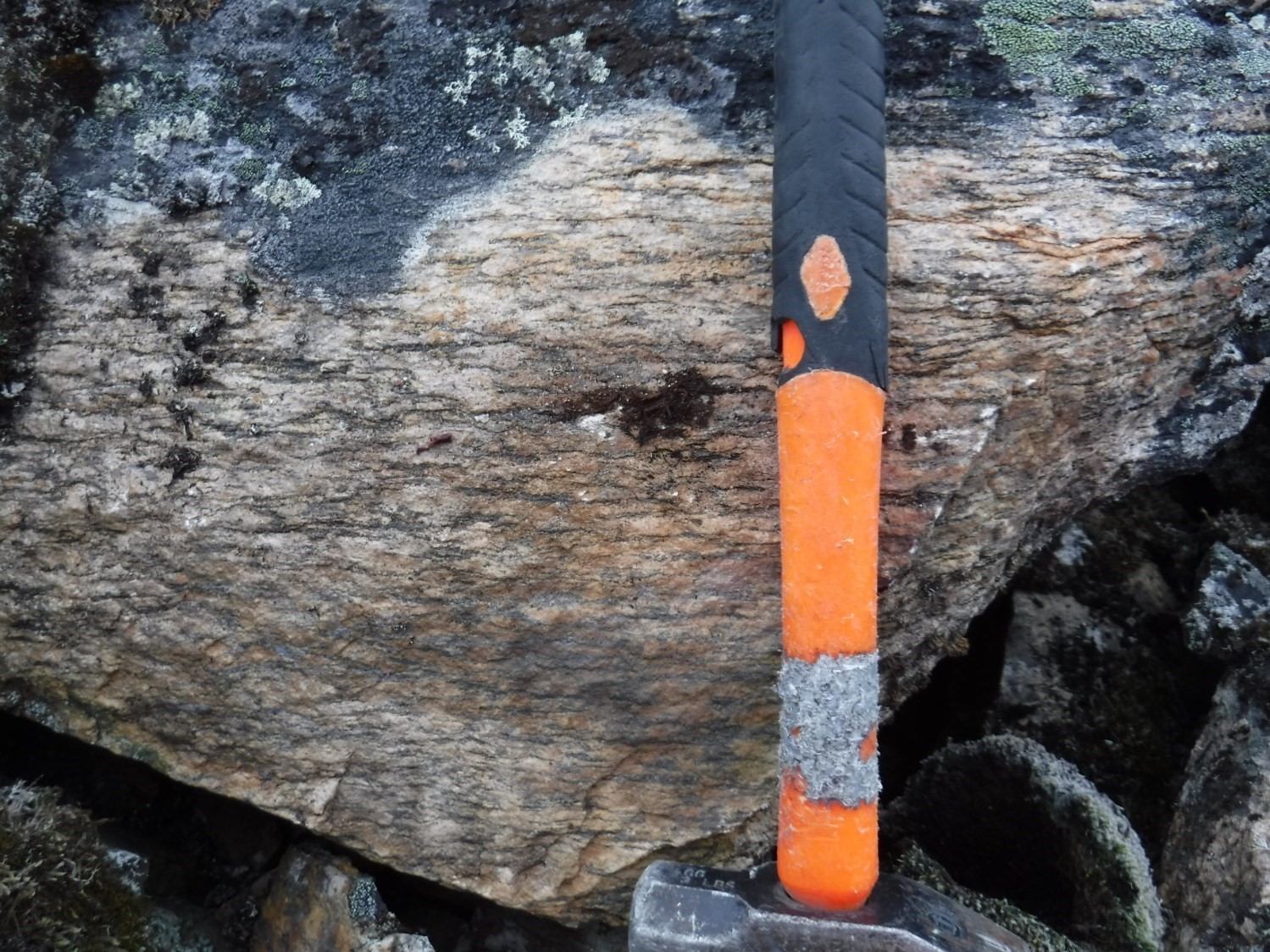 Locally, porphyroclastic monzogranite contains orthopyroxene and has been assigned to subunit nAban1a. The structural and mineralogical characteristics are similar to those of unit nAban1 with the exception of the presence of hypersthene and lower proportions of biotite. Hypersthene is variable uralitized (hornblende rim) and serpentinized. The rock also takes on a green or brown sugar colour characteristic of orthopyroxene rocks.

An Archean age of approximately 2623 Ma was obtained from a sample described as a gneissic porphyritic monzogranite in the Koroc River area (Verpaelst et al., 2000).

The Baudan Suite is part of the ancient rocks of the Core Zone. Relationships with other Archean rocks were not observed in the field. It is cut by granitic intrusions of the Qarliik Suite (pPqik).