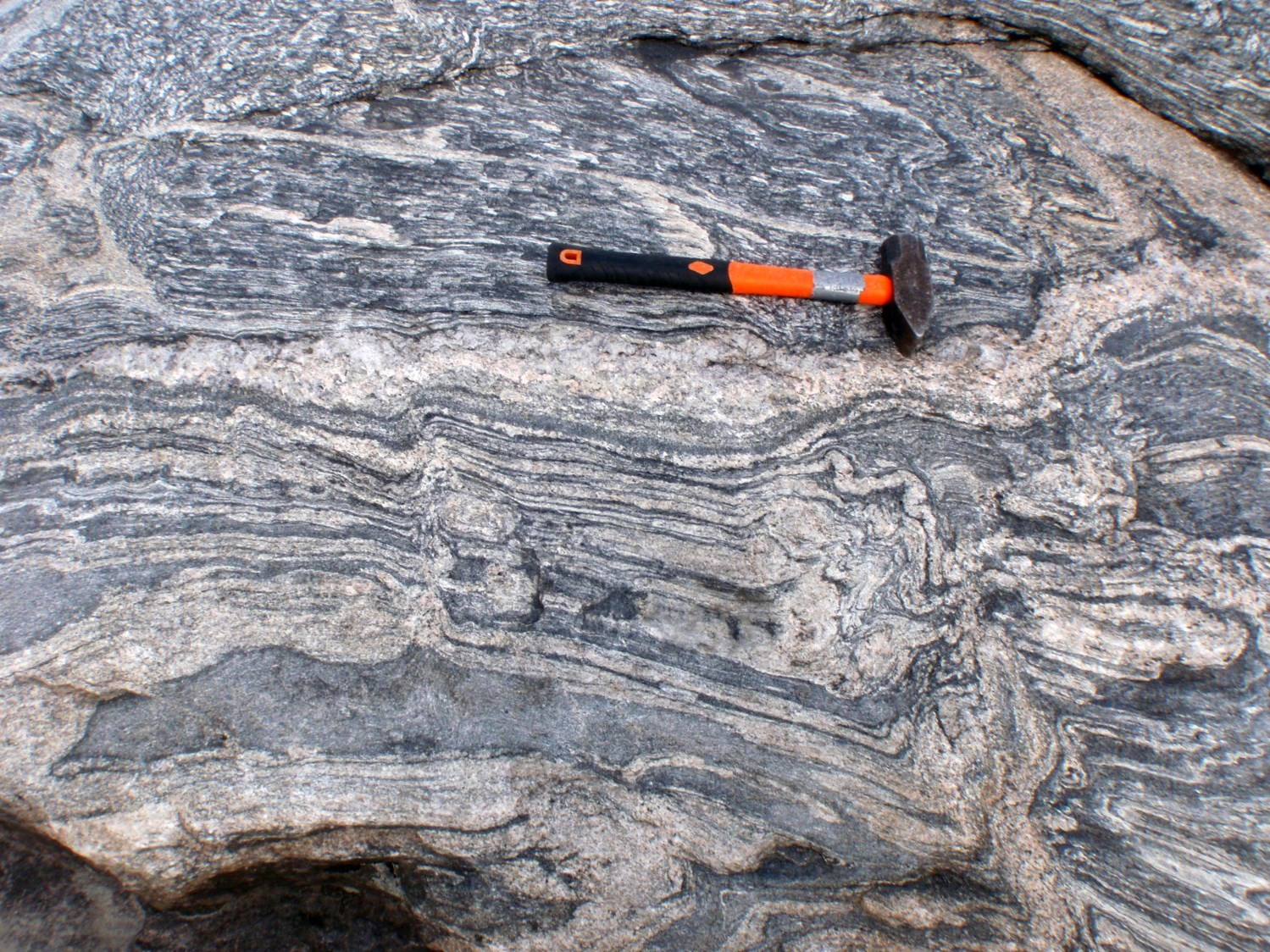 The Fougeraye Complex was introduced by Mathieu et al. (2018) in the Koroc River area to group migmatitic rocks and whitish intrusions, possibly the product of melting of gneiss of the Kangiqsualujjuaq Complex (ApPkan). Migmatitic zones of the entire Core Zone were previously assigned to the Qurlutuq Complex by Simard et al. (2013), Lafrance et al. (2014, 2015, 2016) and Charette et al. (2016). However, as part of the southeastern Churchill Province synthesis, different lithotectonic blocks were identified and it appears that the gneiss (and derived migmatites) observed east of the Moonbase Shear Zone are distinct from those identified in the Kuujjuaq and Ungava Bay area west of the Rivière George Shear Zone. 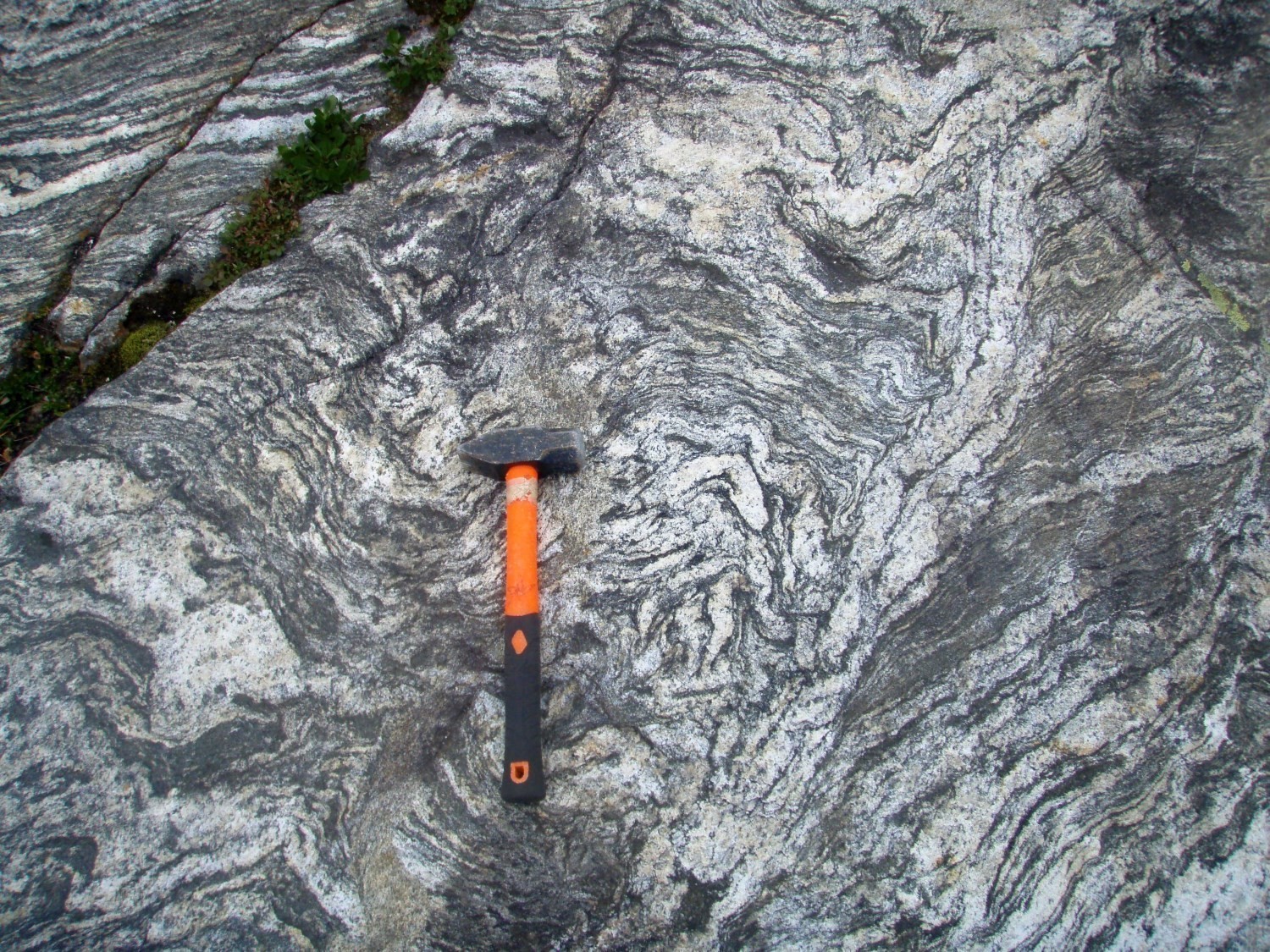 Migmatites of unit pPfog1 are generally stromatic, consisting of at least 50% leucosome forming white and undulating centimetric bands. This leucosome is mostly tonalitic but can be locally granitic or granodioritic. Migmatites contain many decimeter to decameter-wide gneiss rafts of varying composition, similar to those of the Kangiqsualujjuaq Complex. The variation in the leucosome composition appears to be related to the composition of the gneiss affected by partial melting. The neosome, regardless of its composition, is whitish to light grey and contains between 10 and 30% biotite ± hornblende schlierens. The proportion of felsic minerals also varies significantly. Quartz, in large anhedral zones and with undulatory or subgrain extinction, accounts for between 20 and 30% of the rock, while K-feldspar accounts for between 0 and 50% (but usually less than 6%). Quartz also forms small rounded grains. Under the microscope, the rock has variable grain size with large grains of igneous origin alternating with finer-grained recrystallized clusters or bands. Schlierenss also include a significant amount of accessory minerals consisting, in order of importance, of epidote (<2%), apatite (<1%), sphene, zircon (as inclusions in biotite), opaque minerals and muscovite. Allanite cores are regularly observed within epidote (pistachite and zoisite). Alteration minerals such as chlorite, sericite and carbonates are locally observed. 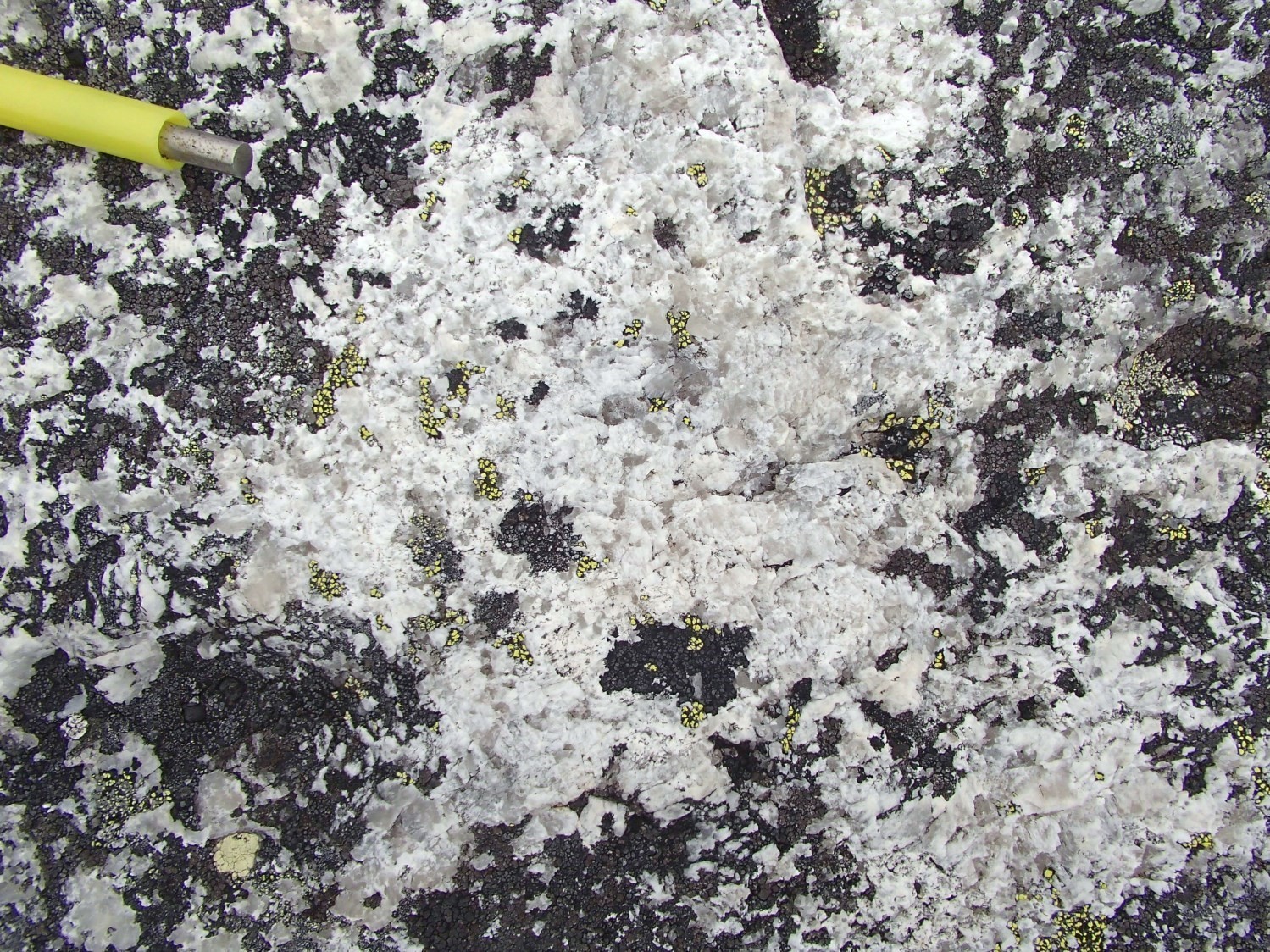 Unit pPfog2 consists of massive to foliated tonalite and white granite, with foliation being mainly due to the alignment of biotite ± hornblende schlierens (~5% mafic minerals). It contains up to 15% centimetric to decimetric enclaves of gneiss of the Kangiqsualujjuaq Complex, migmatites of unit pPfog1, and gabbro and gabbronorite of the Nuvulialuk Suite (pPnuv). Most of these enclaves show deformation prior to emplacement of the intrusive rock. Unit pPfog2 also contains irregular, decimetric to decametric clusters and pockets of whitish pegmatite in diffuse contact. Grain size is heterogeneous and clusters of fine to coarse grains are observed. The distribution of minerals is often uneven, forming large monomineralic zones. Reactional textures at grain contacts, as well as antiperthitic and myrmekitic textures are frequently observed in thin section. Quartz (30-35%) is anhedral and has a strong undulatory extinction. Minor accessory minerals are muscovite (1-3%), opaque minerals, sphene, epidote and zircon. 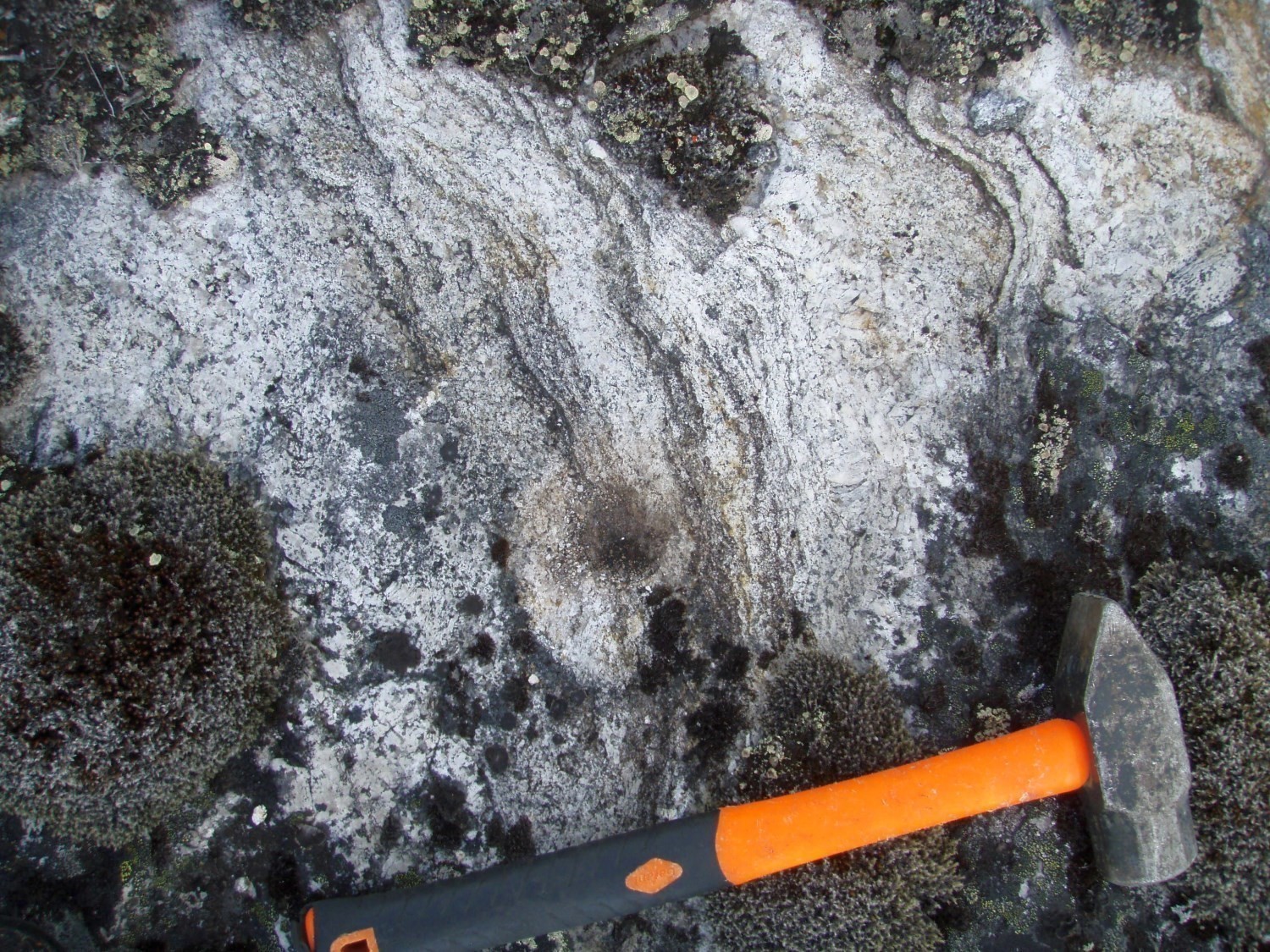 Subunit pPfog2a refers to areas where white intrusions are more heterogeneous due to the presence of many partially assimilated enclaves and 10 to 30% biotite ± hornblende schlierens in the rock. In these heterogeneous areas, samples are similar to migmatitic rocks of the pPfog1 unit, however, there is no real banding in outcrop or fresh exposure. Accessory minerals include allanite, chlorite, apatite, muscovite, zircon and tourmaline.

Preliminary U-Pb dating results on sample 17-MV-1227 gave a crystallization age around 1829 Ma (David, personal communication), synchronous to the Torngat Orogen (1885-1800 Ma; Charette, 2016). The Archean age of the protolith tends to confirm that the Fougeraye Complex derives from melting of the gneissic bedrock.

Migmatitic rocks of the Fougeraye Complex are spatially associated with gneiss of the Kangiqsualujjuaq Complex, with which they are in gradual and poorly defined contact. Banding of migmatitic rocks of unit pPfog1 is irregular, undulating, discontinuous and often chaotic, distinguishing it from the straighter and more regular banding of gneiss. Intrusive rocks of unit pPfog2 are similar to the leucosome of the pPfog1 migmatites and may correspond to an evolved and late phase (ultrametamorphic granite) associated with the melting process that led to the Fougeraye Complex. Rocks of the Fougeraye Complex contain gneiss enclaves of the Kangiqsualujjuaq Complex and are interpreted as the result of partial melting of these gneiss. The change in composition, from tonalite to granite, can be linked to the composition of the gneiss of the Kangiqsualujjuaq Complex.