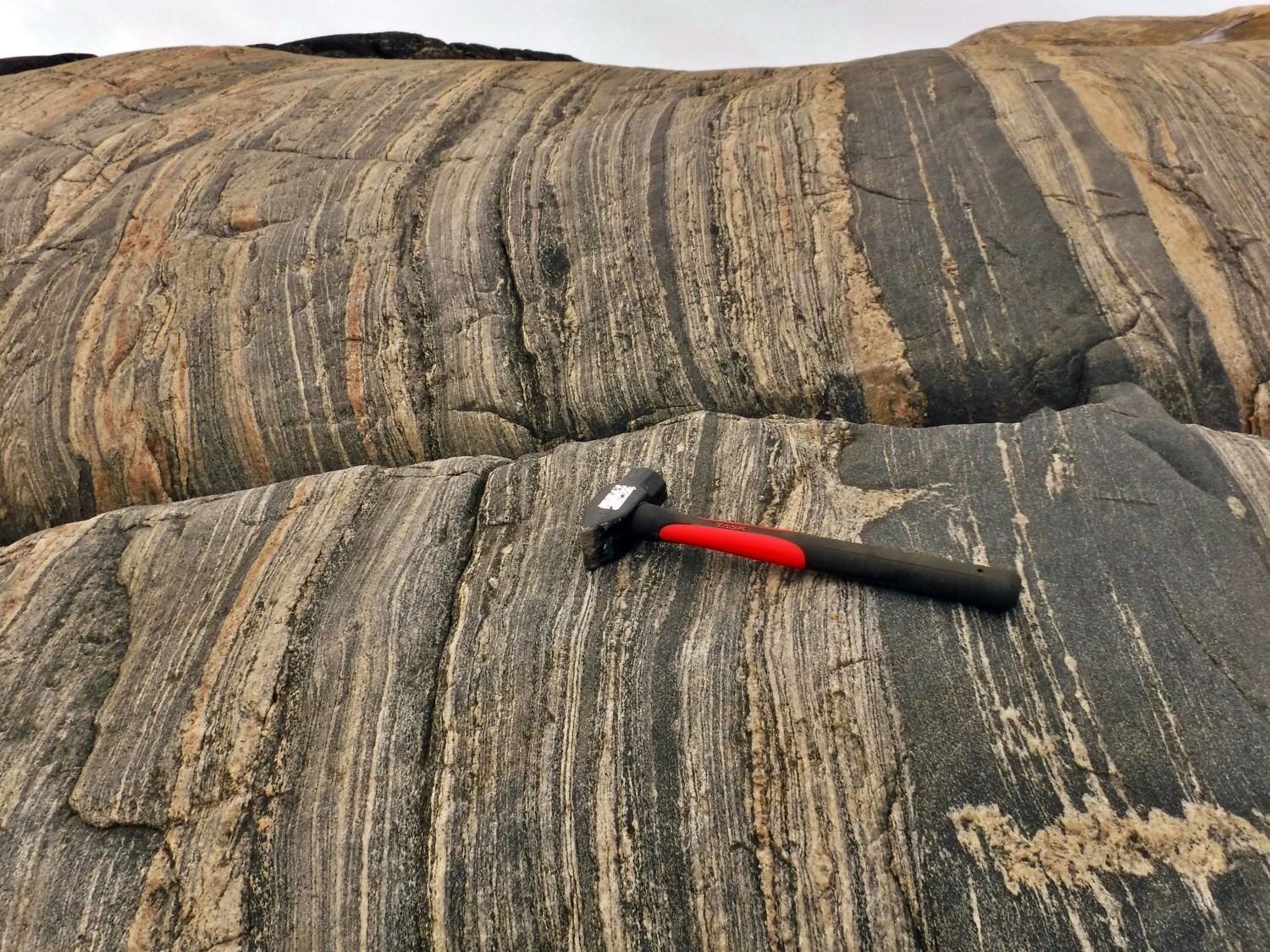 The name “Kangiqsualujjuaq Complex” was introduced by Verpaelst et al. (2000) in the Koroc River area (NTS sheet 24I) to designate a tonalitic gneiss unit that is migmatitized to varying degrees. These authors assigned granitic gneiss and granitic intrusive rocks recognized in the same area to the Baudan Complex (now the Baudan Suite). This terminology was not retained by Simard et al. (2013), Lafrance et al. (2015, 2016) and Charette et al. (2016), as it did not allow for regional-scale migmatitic zones to be distinguished from gneissic zones, as Taylor (1979) had done. The migmatitic zones were thus assigned to the Qurlutuq Complex, while tonalitic and granitic gneisses were grouped together in the Ungava Complex. Subsequently, in a synthesis of the southeastern Churchill Province (Lafrance et al., 2018), different lithotectonic domains were identified and it appears that the gneisses observed within these domains are distinct from one another.

In the Falcoz Lithotectonic Domain, all of the tonalitic to granitic grey gneisses were grouped into the Kangiqsualujjuaq Complex by Mathieu et al. (2018). This complex, located east of the Moonbase (ZCmob) and Rivière George (ZCrge) anastomosing shear zones, includes part of the outcrops previously assigned to the Baudan Complex by Verpaelst et al. (2000), namely those of grey granitic gneisses, but excludes migmatitic rocks derived from the melting of these gneisses that were instead assigned to the Fougeraye Complex (Mathieu et al., 2018).

The name Kangiqsualujjuaq comes from the Northern village of the same name located at the mouth of the George River (sheet 24I12). The table below summarizes the correlation between the current and previous units. 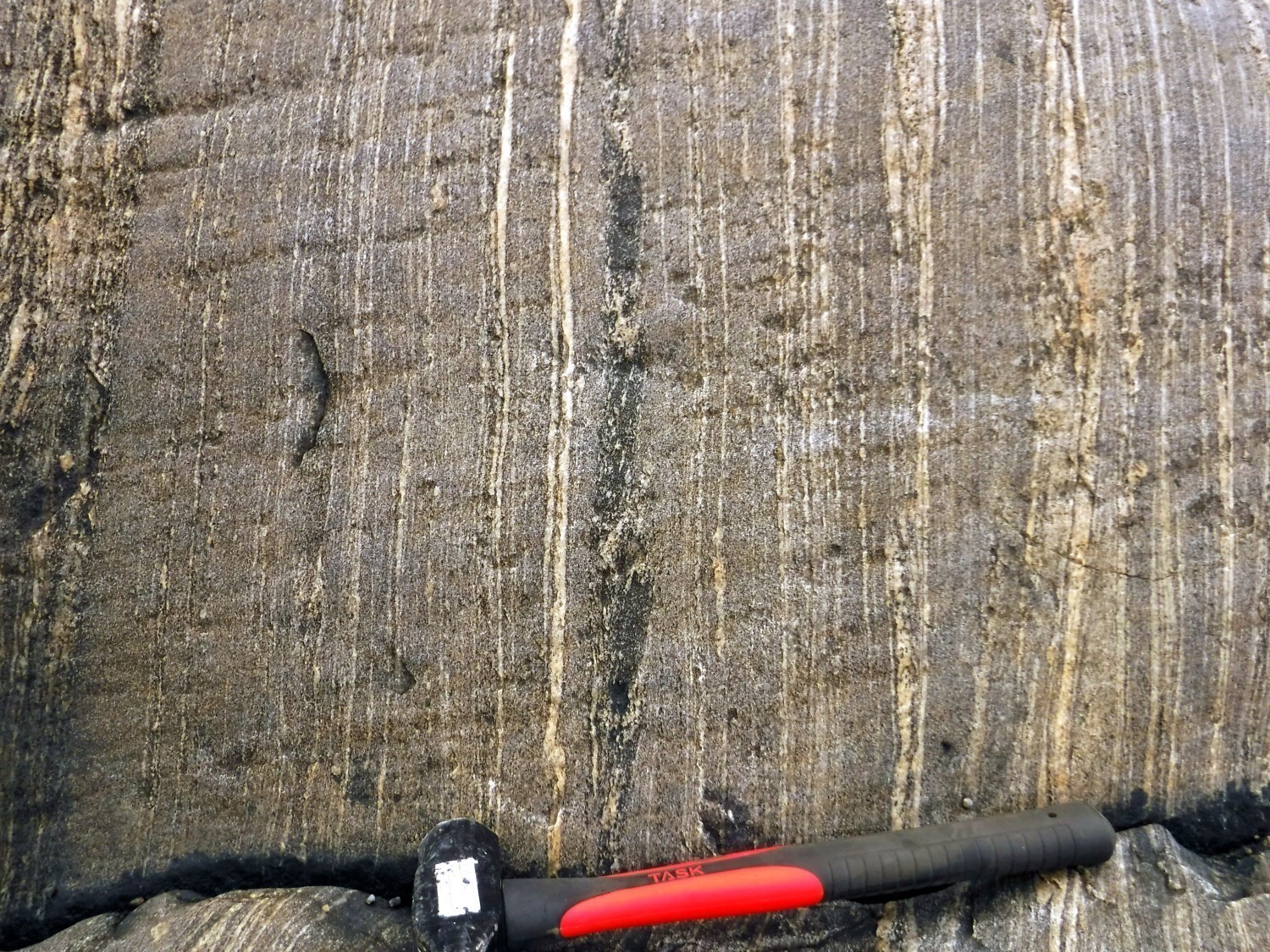 The gneiss composition of unit Akan1 is mostly tonalitic, but locally changes to a quartz diorite. It is medium to light grey and contains between 5 and 25% tonalitic millimetric to centimetric leucocratic bands. Some of these leucocratic bands represent leucosome. The rock is well foliated, fine to medium-grained, and shows partial recrystallization textures and fairly well defined banding. This banding is generally accentuated by the presence of granitic intrusions subconformable to gneissosity. It contains between 8 and 15% ferromagnesian minerals in varying proportions from band to band. These minerals, mainly brown to green biotite with more variable amounts of hornblende, define strong foliation. Gneiss of unit Akan1 may contain up to 5% K-feldspar, interstitial or as exsolution, distributed heterogeneously in the rock. Quartz has undulating extinction and quartzofeldspathic minerals usually show indented rims, indicating dynamic recrystallization. The main accessory minerals are, in order of importance, apatite, zircon, epidote, opaque minerals, sphene, muscovite and allanite. Plagioclase is weakly sericitized in places. 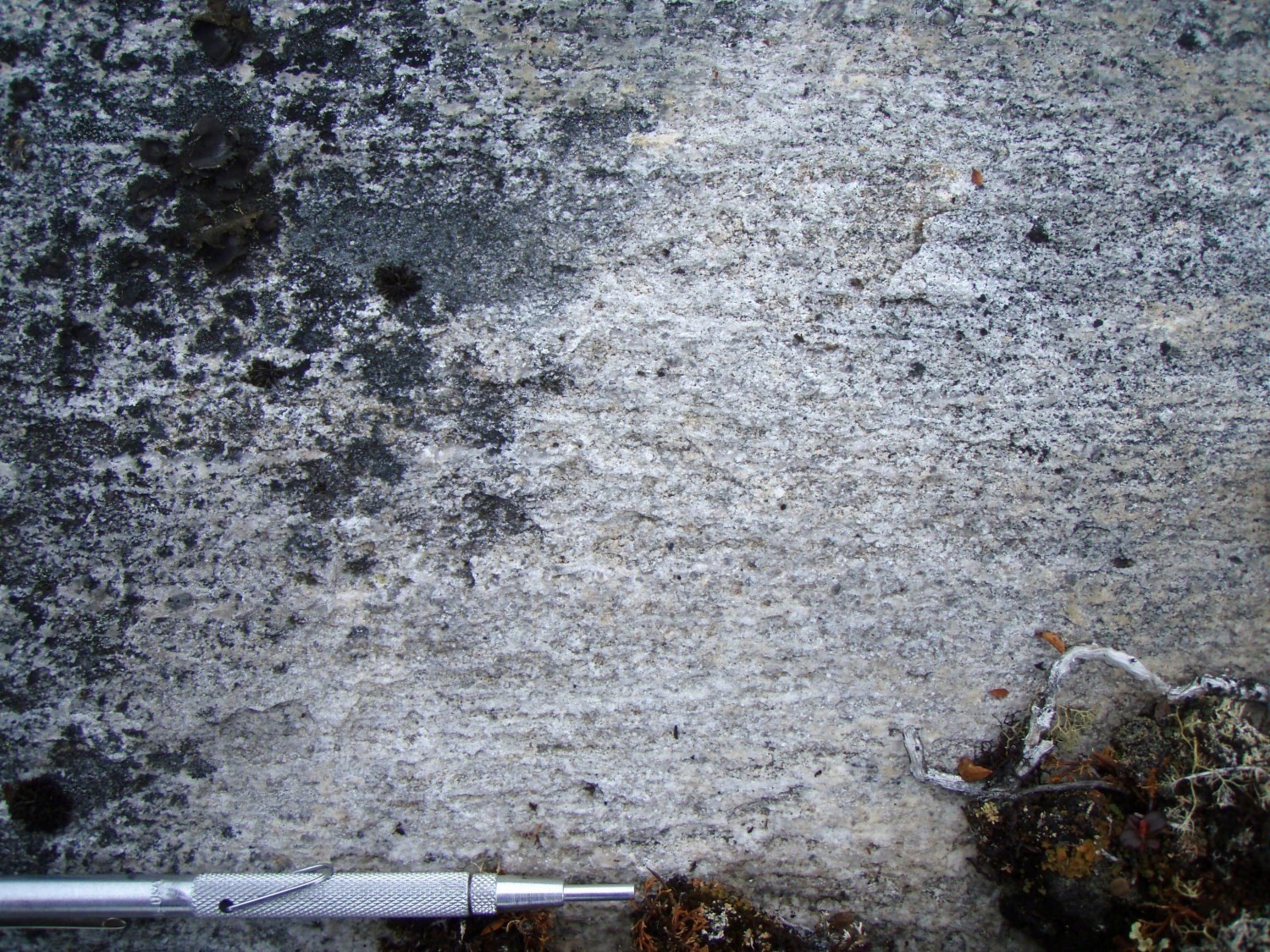 In some areas, the Kangiqsualujjuaq Complex contains decametric to kilometric horizons of homogeneous foliated biotite tonalite. These tonalites may represent Archean intrusions that are poorly deformed and weakly affected by Paleoproterozoic migmatization. The presence of small centimetric bands of mobilisate in the tonalite indicates that it has still undergone some degree of partial melting. The tonalite is fine grained, light grey to very light grey, even grained and partially recrystallized. It contains 10-15% biotite and <8% K-feldspar. 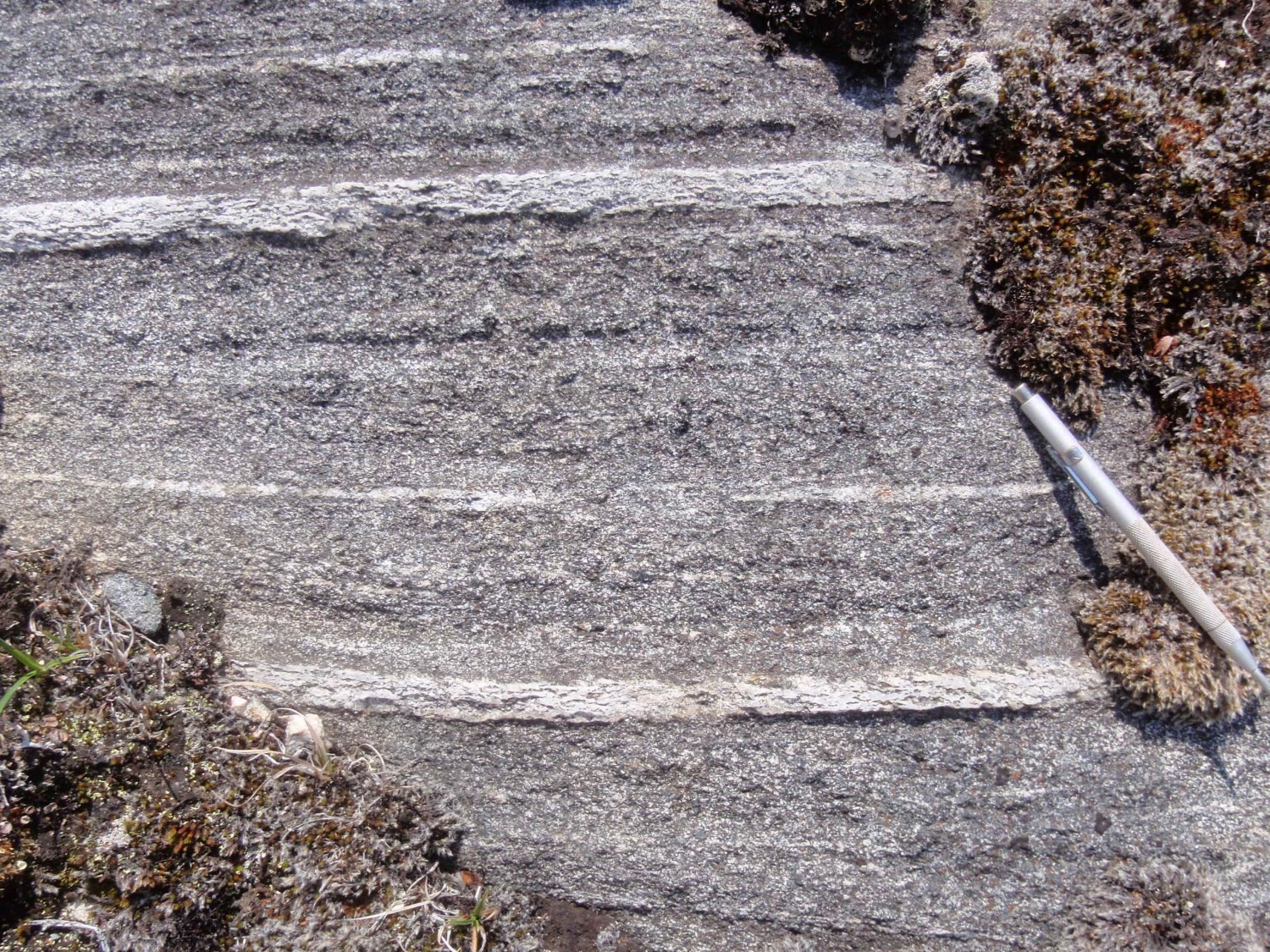 The darkest and predominantly dioritic gneissic rocks have been assigned to subunit Akan1b. This unit forms thin klippes less than 2 km wide inside other gneiss units of the Kangiqsualujjuaq Complex. It also occurs as centimetric to metric horizons within the Akan1 tonalitic gneiss. The rock is characterized by alternating millimetric to decimetric bands of diorite, quartz diorite and tonalitic whitish mobilisate (10-25%). Some decimetric layers are more affected by partial melting. Biotite and amphibole are present in greater proportion than in unit Akan1 (15-35%), particularly with hornblende. Accessory minerals observed under the microscope are sphene (<1%), K-feldspar (<2%), epidote, apatite, allanite, opaque minerals and zircon. The rock shows a granoblastic texture, but a slight orientation of all mineral phases can be observed. Hornblende contains quartz and plagioclase inclusions. 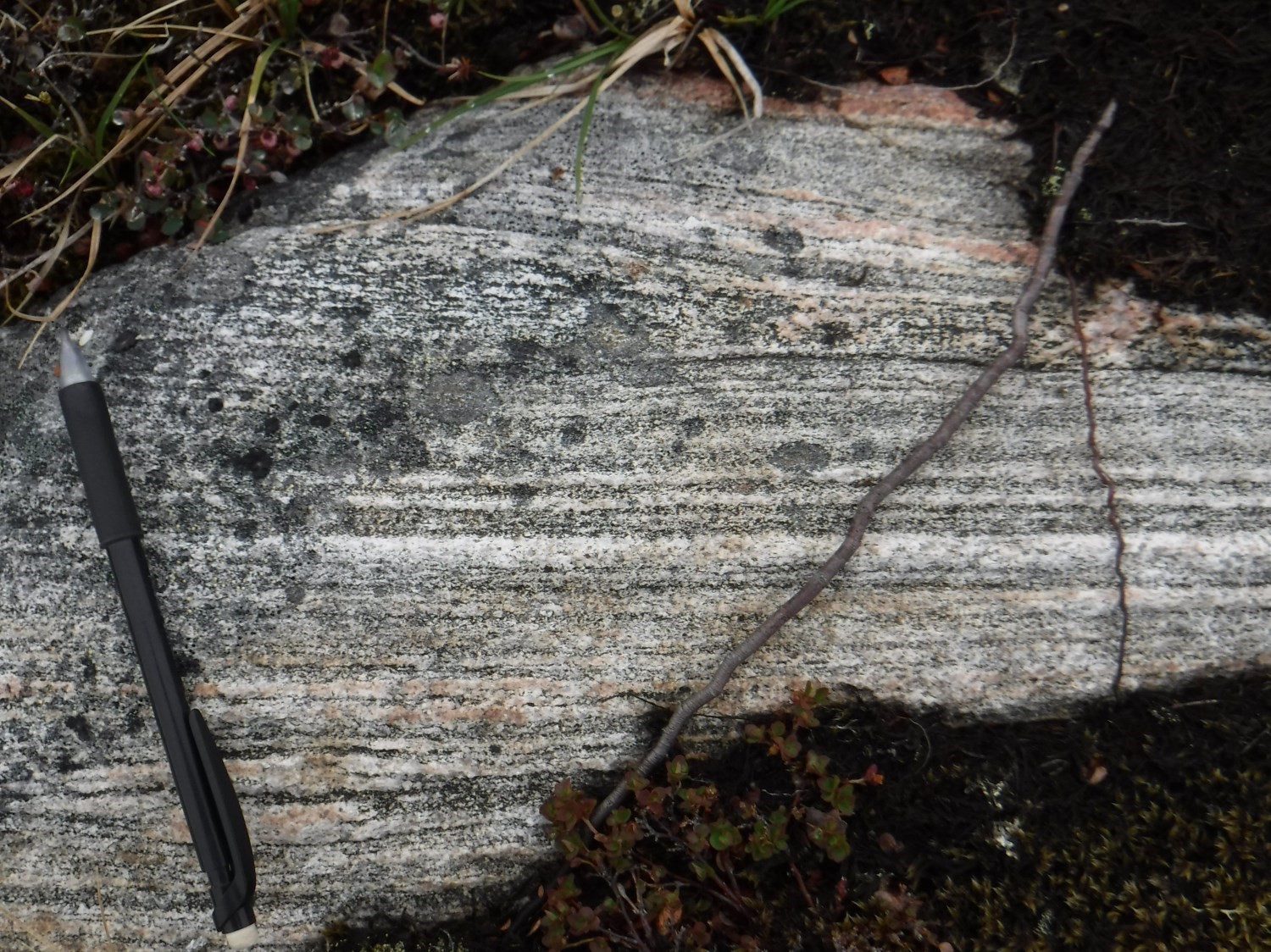 In outcrop, granitic gneiss of unit Akan2 is difficult to differentiate from tonalitic gneiss of unit Akan1. It has a light grey colour and contains granitic or granodioritic whitish and pinkish bands that are conformable with gneissosity. Study of thin sections and stains revealed the high percentage of K-feldspar (20-35%) and a lower overall proportion of ferromagnesian minerals (4-12%) in the form of aligned biotite flakes containing zircon inclusions. The gneiss is fine-grained with a foliation defined by biotite alignment and a beginning of preferential orientation of the quartzofeldspathic matrix. K-feldspar grains are evenly distributed in rock and have undergone moderate to high recrystallization, as have plagioclase and quartz grains. Quartz has undulating extinction and myrmekites are present. Accessory minerals are sparse and consist of epidote, allanite, apatite, opaque minerals, zircon, hematite, sphene and muscovite. Weak alterations are observed in places such as plagioclase sericitization and biotite choritization. 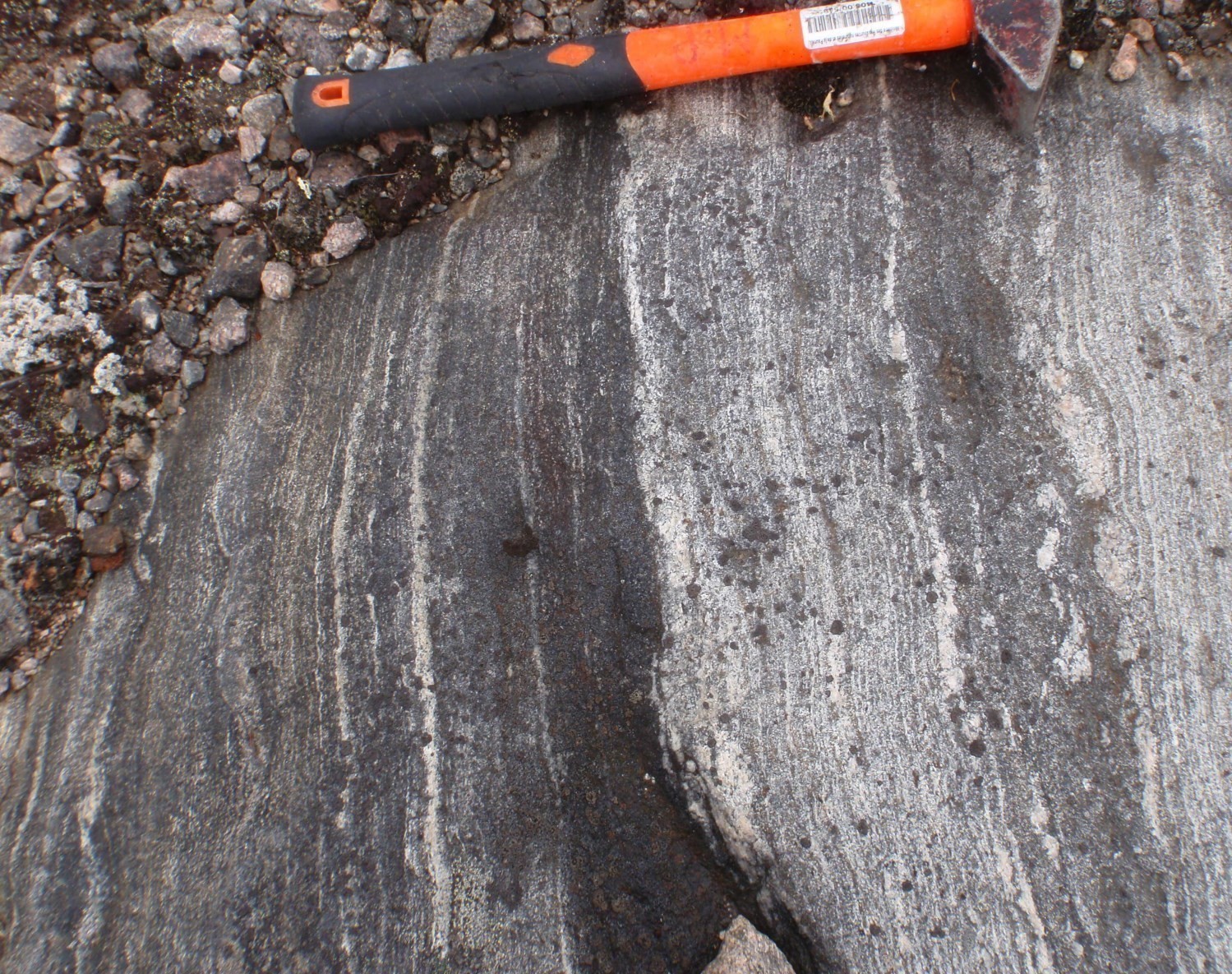 Locally, there is an occurrence of intermediate potassic gneisses that have been grouped together in subunit Akan2a. In the field, these gneisses have been described as dioritic gneiss more or less migmatized similar to those of subunit Akan1b. However, the study of thin sections and stains revealed the presence of significant amounts of K-feldspar, giving these rocks a composition that varies from monzodiorite to monzonite. The Akan2a rocks contain between 20 and 30% green hornblende and brown biotite, and usually contain bands rich in accessory minerals, the main ones being epidote, sphene, opaque minerals, apatite and allanite. 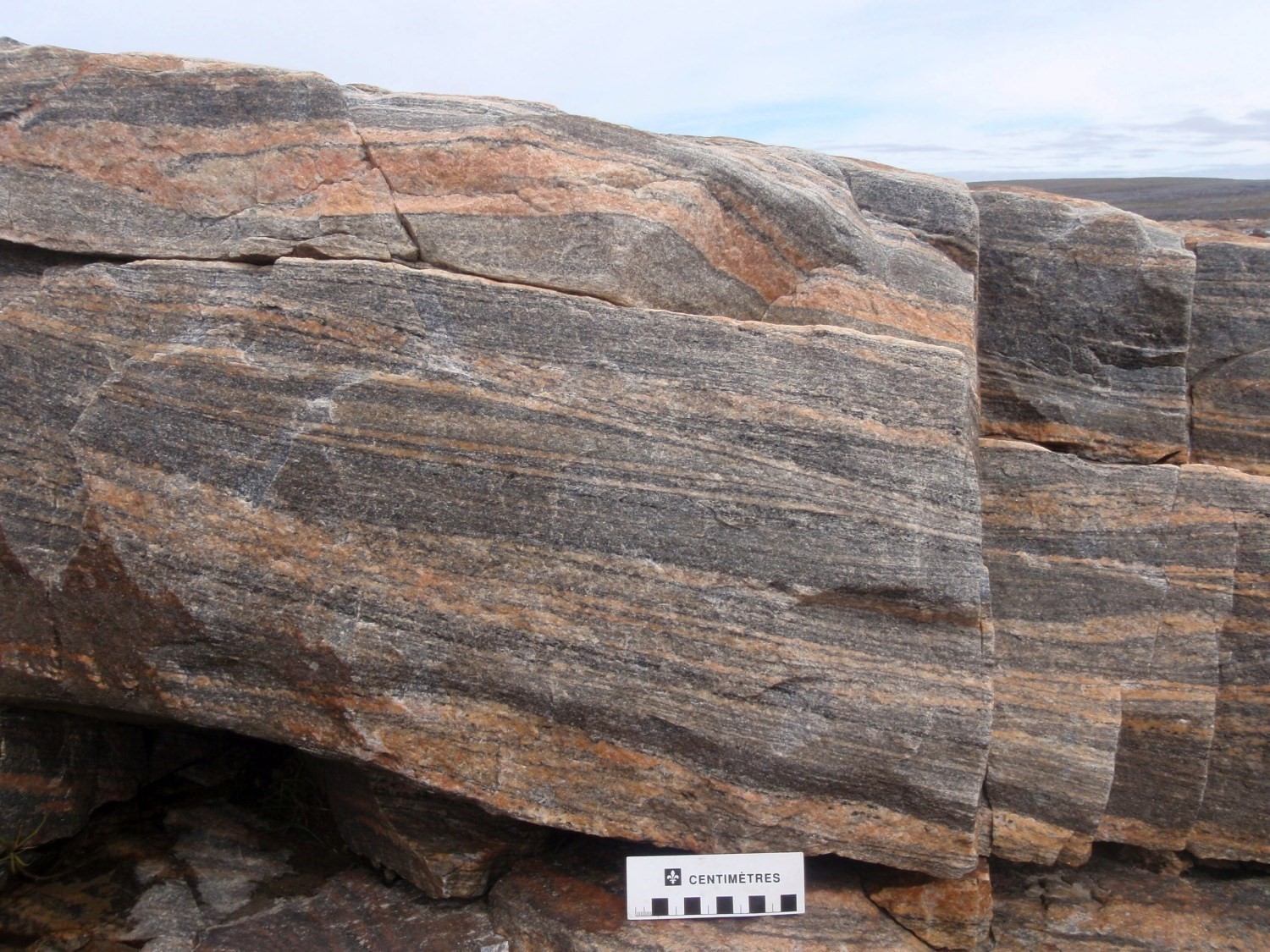 Unit Akan3 is characterized by tonalitic gneiss similar to that of unit Akan1, but contains 25-45% millimetric to centimetric pink granite bands parallel to gneissosity. These bands are fine to medium-grained, partially recrystallized and have undergone the same deformation as the tonalitic portion of the gneiss. The gneiss is partially recrystallized and grain rims are generally indented. Ferromagnesian minerals (5-15%) are dominated by biotite, locally partially chloritized, with some hornblende locally. The main accessory minerals are opaque minerals, epidote, sphene, apatite and zircon.

Unit Akan3 could represent areas where Archean tonalites have been cut by pretectonic granite dykes. Both phases would then have been deformed, folded and paralleled by deformation and metamorphism.

The Paleoproterozoic ages obtained (1874 to 1845 Ma) correspond to deformation related to the Torngat Orogeny (1885 to 1810 Ma; Charette, 2016; Charette et al., 2021). Crystallization of the migmatitic rocks of the Fougeraye Complex, interpreted as being derived from partial melting of the gneisses of the Kangiqsualujjuaq Complex (Mathieu et al., 2018), is slightly later, around 1835 Ma.

Neoarchean metamorphic ages (~2.6 Ga) suggest that there was also an episode of metamorphism at this time (Lafrance and Vanier, 2022).

The Kangiqsualujjuaq Complex is one of the oldest units in the Falcoz Lithotectonic Domain. It is the host rock of the majority of Paleoproterozoic intrusive units; it also forms enclaves in these same units. The Kangiqsualujjuaq Complex gneiss enclaves are particularly prevalent in migmatitic rocks and whitish intrusions of the Fougeraye Complex, which are interpreted as the result of partial melting of the gneisses.