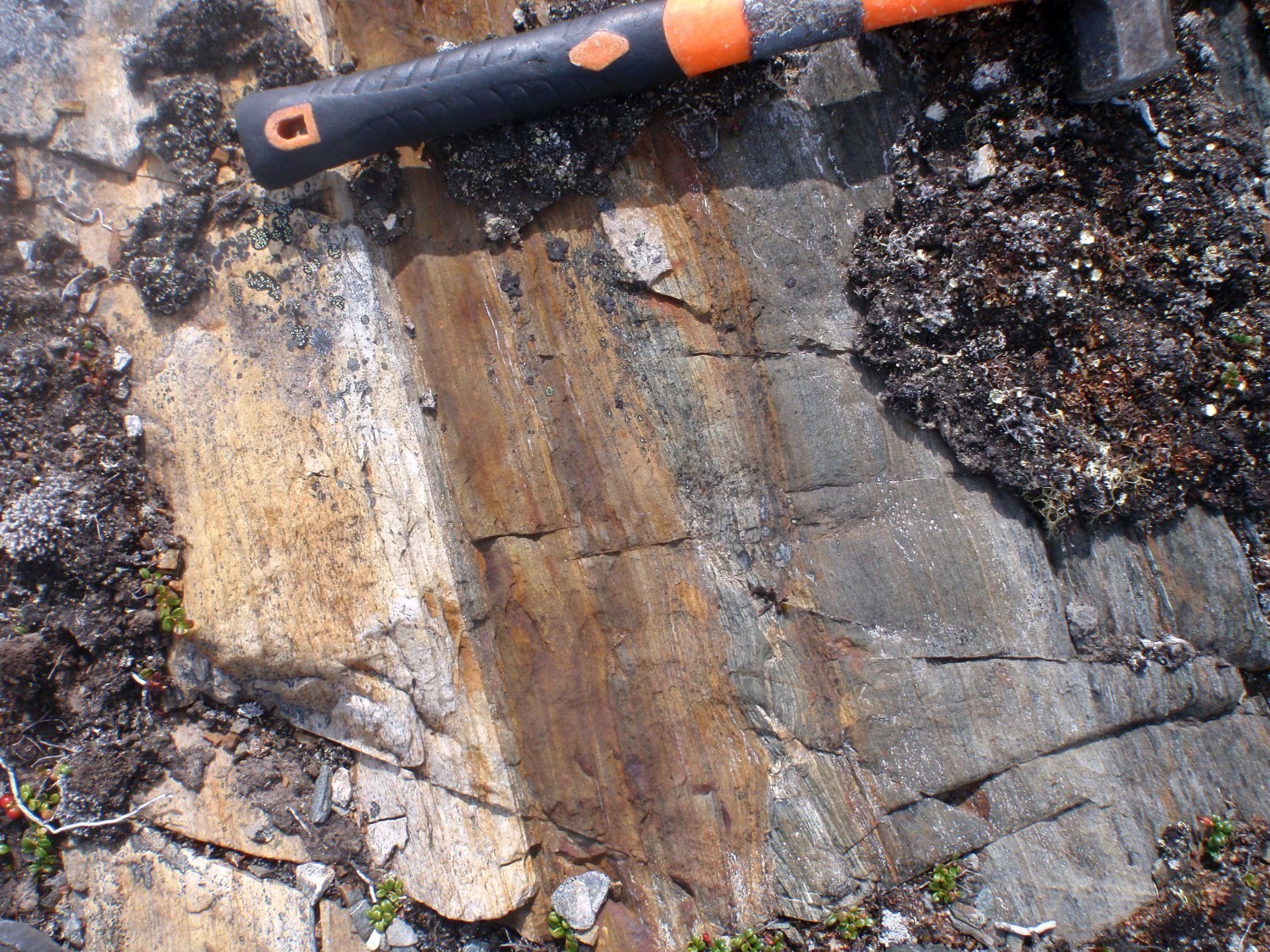 The « Tunulic Belt » was introduced to describe a strip of metamorphosed volcano-sedimentary rocks located in the SW portion of the Henrietta Lake area (Lafrance et al., 2015). It has also been recognized in the Brisson Lake (Lafrance et al., 2016) and Jeannin Lake (Charette et al., 2016) areas. As part of the Southeastern Churchill Province regional synthesis (SECP; Lafrance and Charette, 2018), it has been renamed the Tunulic Complex because of its assemblage of rocks of different genetic classes. In the southern portion of the SECP, some units of the Tunulic Complex had been associated by various authors with the George Complex, as well as with the Atshakash Complex (Owen, 1989; Girard, 1990; Danis, 1991; van der Leeden, 1994, 1995). The unit is named after the Tunulic River, which crosses the western border of sheets 24H05 and 24H12.

The various units of the Tunulic Complex are commonly interstratified. They are cut by a granular, whitish granitic phase resembling rocks of the Guesnier Complex nApPges2 unit, by granodiorite and granite dykes (locally porphyraceous) of the De Pas Granitic Suite (pPdep), and by millimetric quartz veinlets. Also observed in the volcano-sedimentary sequence are tonalite and biotite diorite dykes, greyish, homogeneous, fine to medium-grained, and containing small feldspar phenocrystals and amphibolitized basalt enclaves. Most of these intrusions are parallel to banding or regional foliation. Metavolcanic and metavolcaniclastic units of the Tunulic Complex are associated with areas of moderate to high aeromagnetic susceptibility, while metasedimentary sequences correspond to areas of lower magnetic susceptibility. 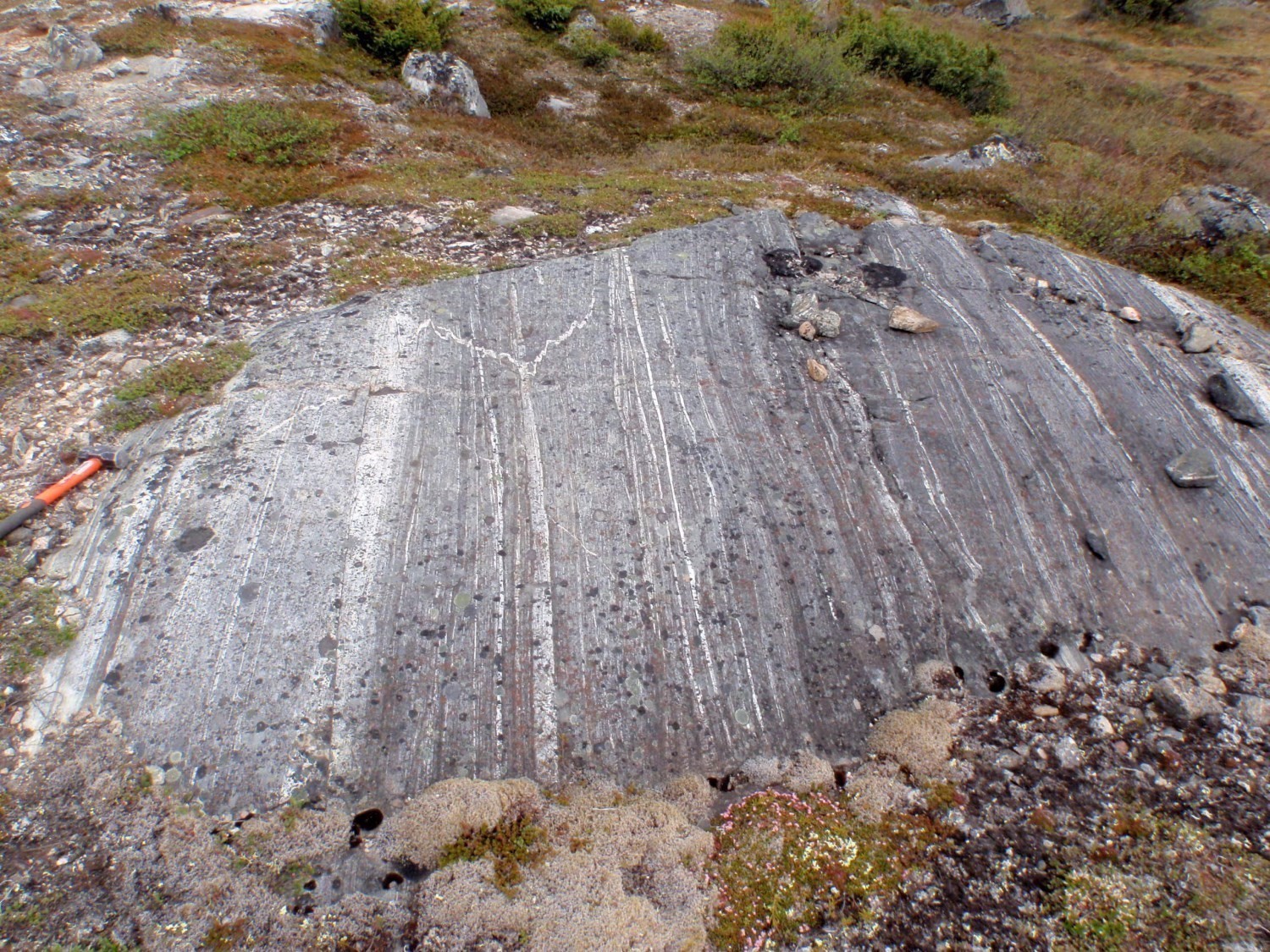 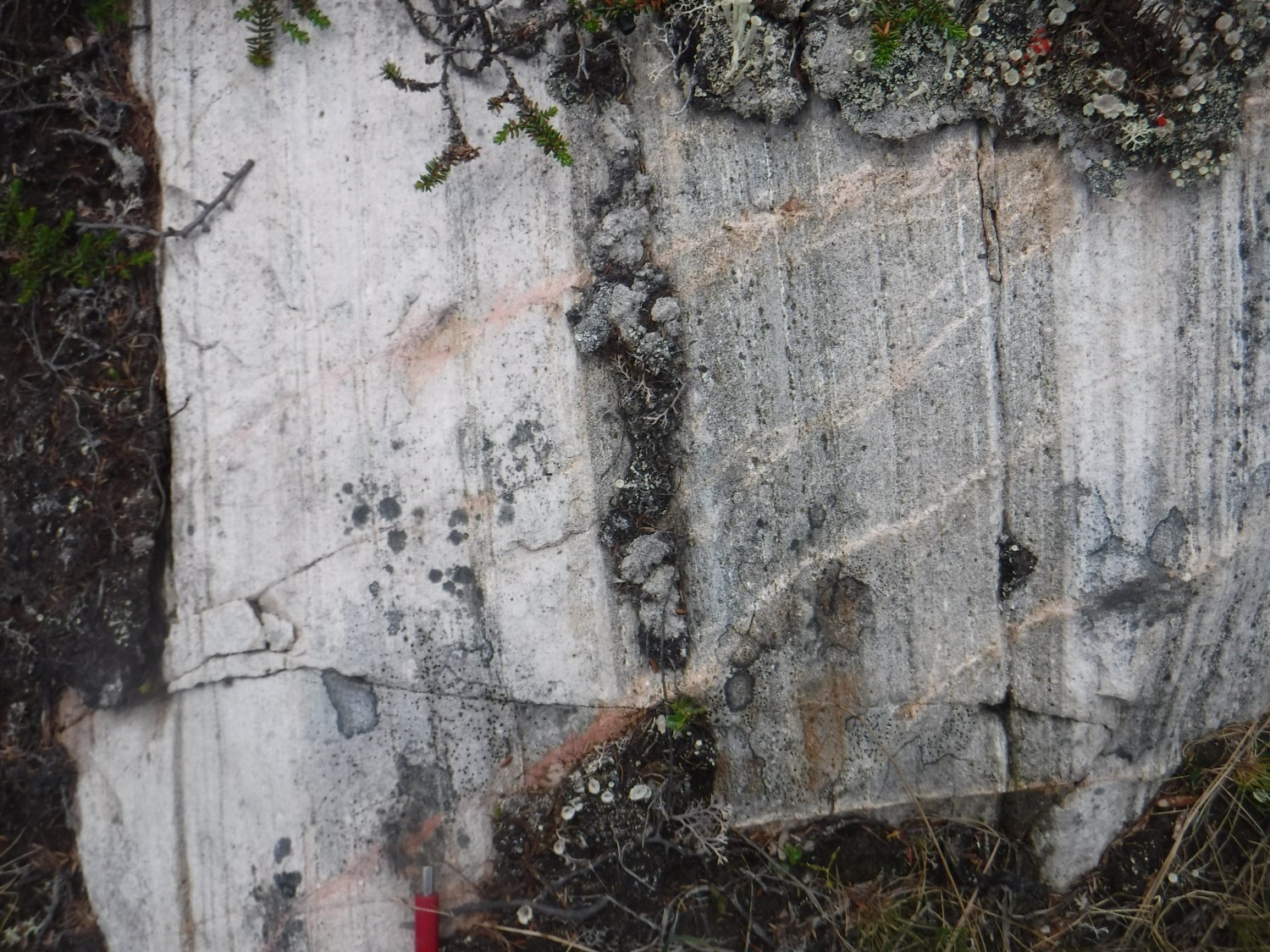 In the Mistinibi Lake area, van der Leeden (1995) also mentions the presence of metric layers of metavolcaniclastics, augen biotite-muscovite-actinolite schists, as well as felsic lava. Eyes are up to 4 mm long and composed of feldspar and fine-grained trondhjemite fragments. Felsic lava is massive, consisting of grey-white rhyolite or dacite, and also contains millimetric quartz eyes. 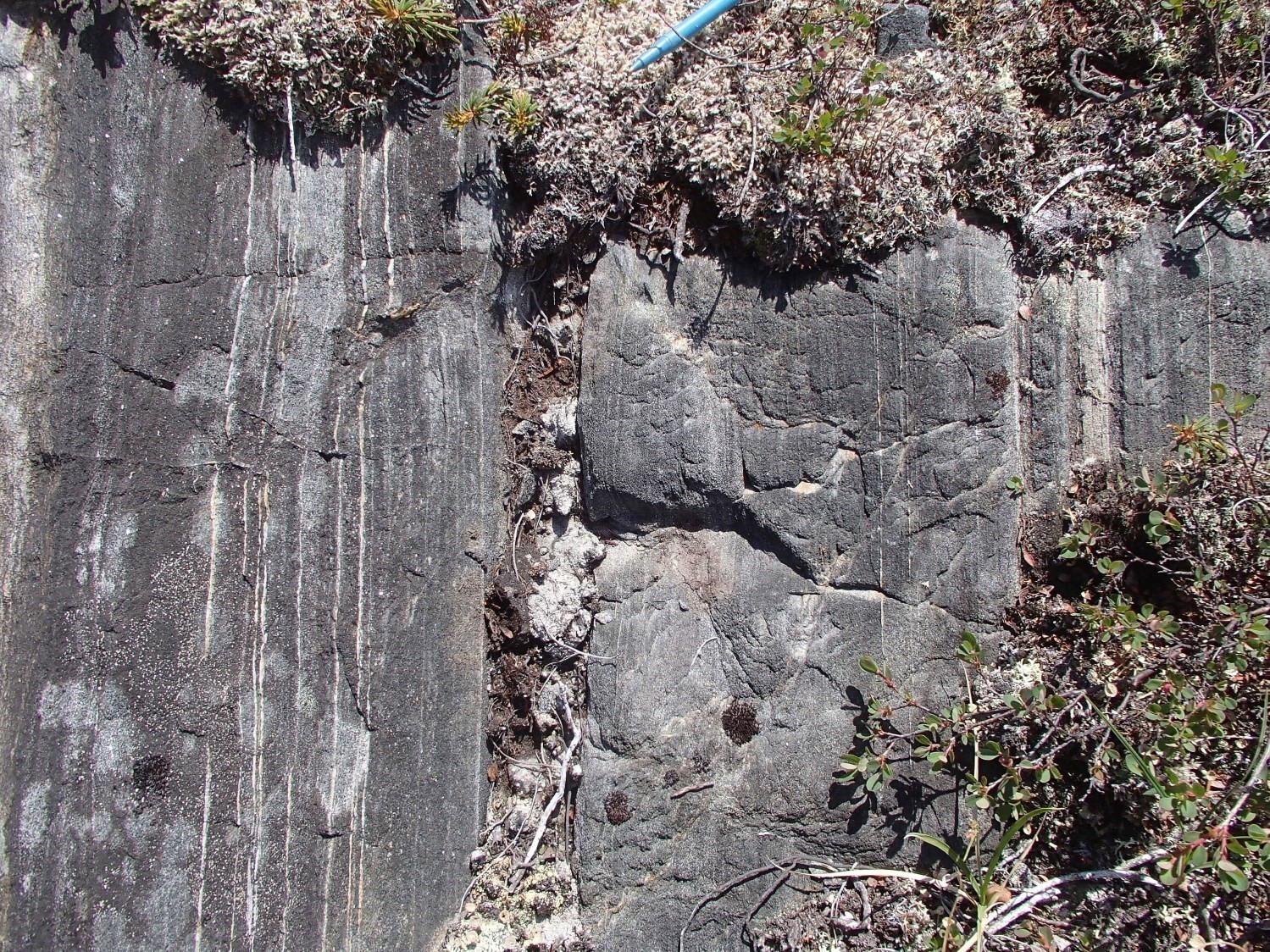 Metabasalt is homogeneous, fine to very fine grained, black in altered surface and dark green in fresh exposure. It is usually granoblastic to nematoblastic, even grained, foliated and banded, locally schistose, laminated or slightly foliated. Centimetric banding is caused by a variation in the proportion of ferromagnesian minerals. Though deformed, pillow facies have been preserved locally in amphibolitized basalt, which then shows aphanitic black edges similar to hyaloclastites around flattened and disaggregated pillows. Metabasalt contains 50 to 65% ferromagnesian minerals, mainly green hornblende and lower amounts of clear actinolite needles, variously chloritized brown biotite (2-5%) and epidote (1-3%). The main accessory minerals are opaque minerals (magnetite and ilmenite), sphene, apatite, quartz and zircon. The rock locally shows a spotted texture caused by garnets (<1 mm) or hornblende porphyroblasts. Amphibolite layers are typically decimetric to metric, interstratified with felsic to intermediate and metasedimentary units of the Tunulic Complex.

In the southern portion of the SECP, slightly thicker strips of metabasalt were identified by Owen (1989) and Danis (1991) in the Atshakash Complex. These have been grouped into subunit nAtun1a. Metabasalt is fine to very fine grained. 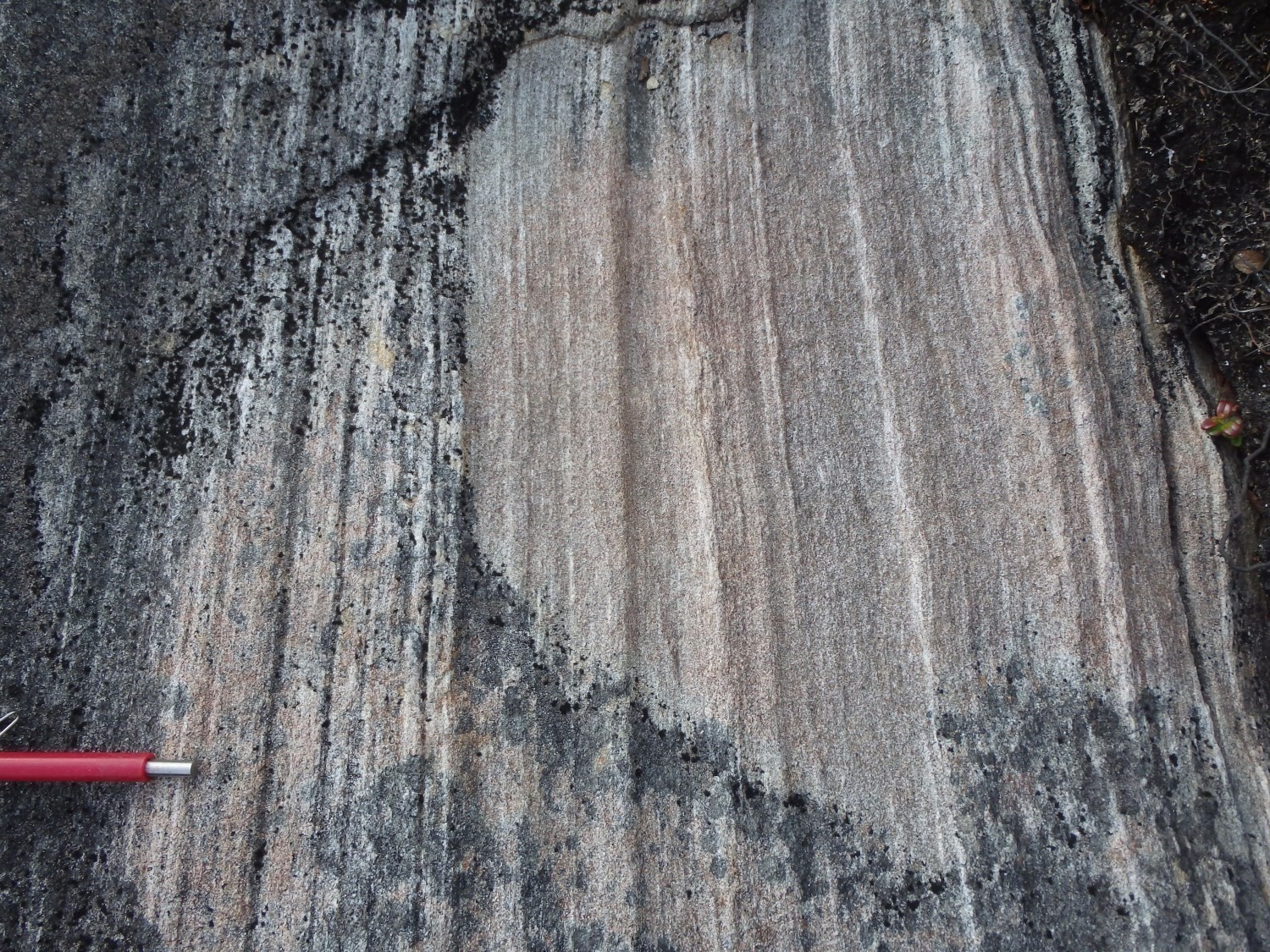 Unit nAtun2 consists of banded metasedimentary rocks, fine to very fine-grained, which have a granoblastic texture. The rock shows a brownish to rusty grey alteration patina and a light to dark grey fresh exposure. Two types of banding are observed: one is marked by variations in modal composition and the other is marked by grain size differences in the rock; another shows sharp alternating centimetric to decametric beds of varying composition consisting mainly of metapelite, metasandstone and metawacke with, locally, quartzite and meta-arkose. This banding probably represents primary bedding. Metasedimentary rocks are migmatized in places, especially pelitic beds. Up to 25% boudinaged millimetric ribbons of whitish mobilisate are then observed. Some decimetric to metric beds of paraschist and heterogranular diatexite having biotite schlierens are also present.

Unit nAtun2 rocks are foliated, especially when affected by the ZCrge. In this zone, they show mylonitic foliation, feldspar porphyroclasts, quartz bands and ferromagnesian mineral clusters rounding other minerals. Depending on the rock composition, there is 0 to 15% microcline, 1 to 10% muscovite, 5 to 25% ferromagnesian minerals, plus quartz and plagioclase. Locally chloritized brown biotite is still present and is the main ferromagnesian phase, but there are also zones containing garnet, sillimanite or hornblende. Garnet occurs as cracked poikiloblasts containing inclusions of muscovite, biotite and quartz. Sillimanite forms millimetric to centimetric bundles of fibrous minerals concentrated along foliation planes. Accessory minerals are sparse and consist of apatite, opaque minerals (magnetite and sulphides), zircon, allanite, epidote and sphene. 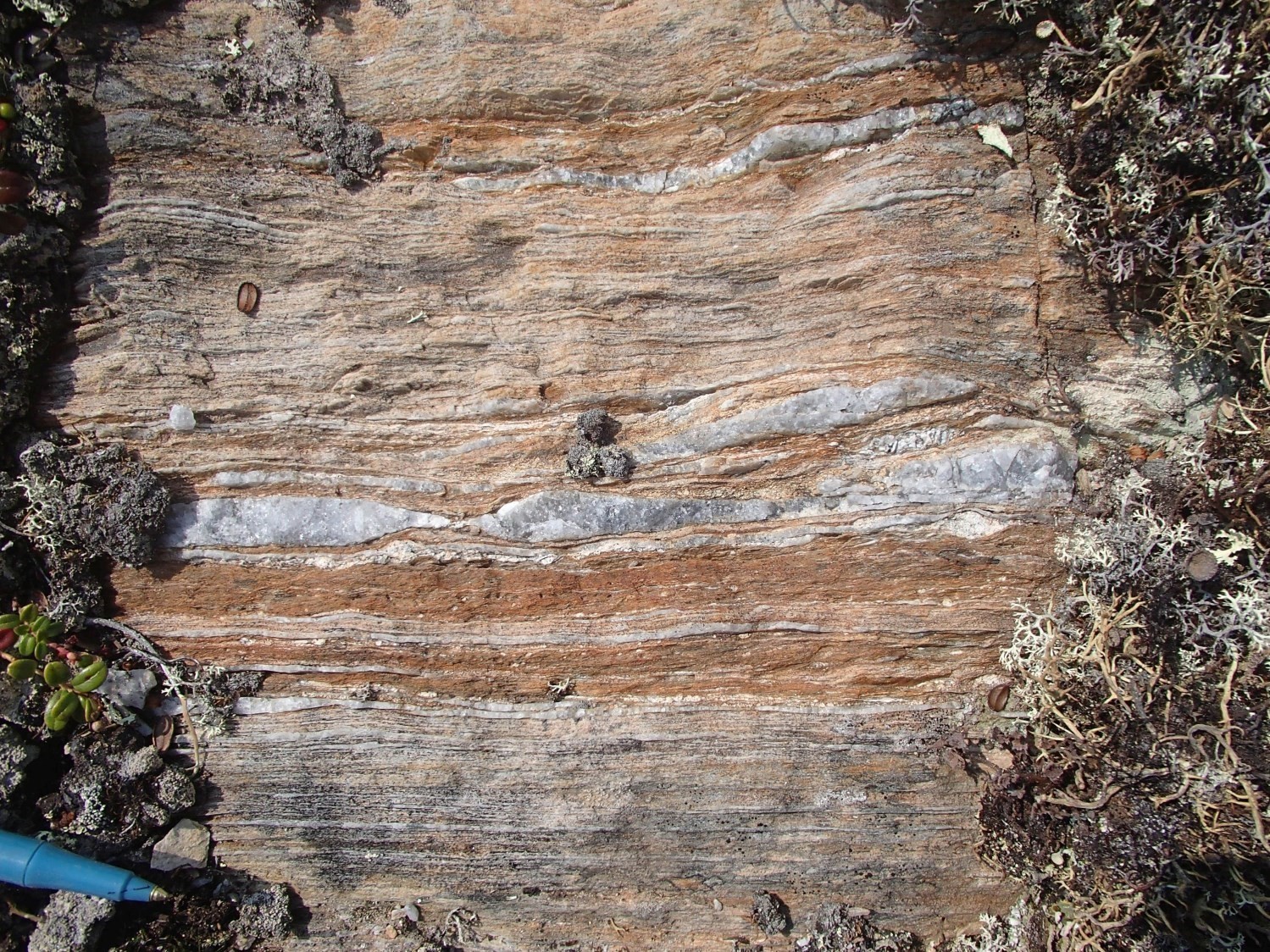 Van der Leeden (1994, 1995) and Owen (1989) also mention the presence of centimetric to metric beds of cherty rocks, marbles and calcosilicate rocks in the Atshakash Complex. Metachert is massive or banded, recrystallized and light grey to dark brown. Marbles and calcosilicate rocks are medium to light grey, medium to fine grained, and well banded.

Unit nAtun3 groups gabbro intrusions of probable synvolcanic origin included in volcano-sedimentary sequences of the Tunulic Complex. These intrusions generally occur as metre to hectometre-wide sills, locally dykes, and are distinguished from metabasalt by its coarser grain size and its massive to slightly foliated appearance. Unit nAtun1 metabasalt occurs locally as enclaves in gabbro. 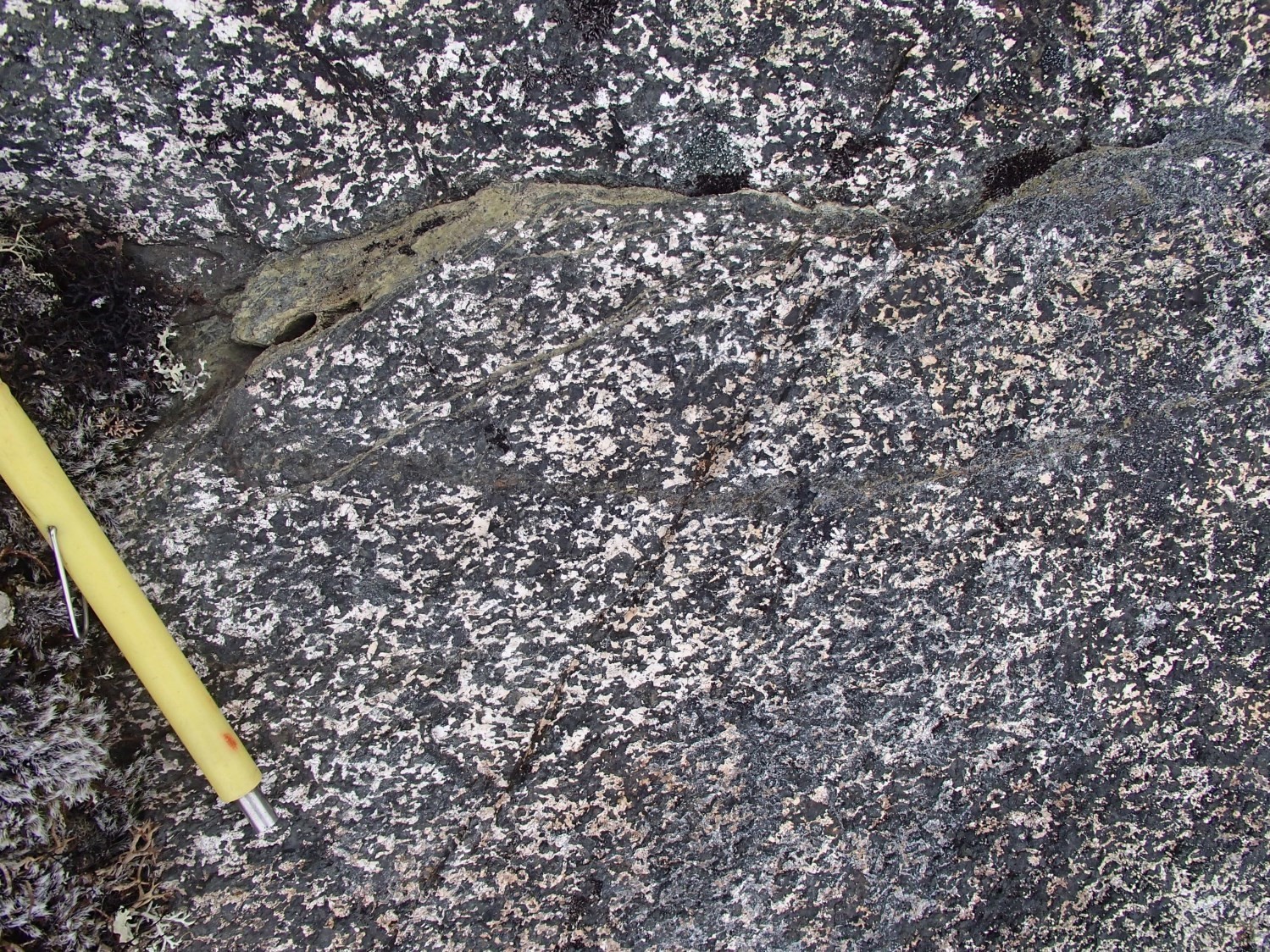 Gabbro is homogeneous, greenish black in fresh exposure and white and black or white and green spotted in altered surface. It is medium to coarse grained. It contains 2-50% plagioclase phenocrystals 0.5 to 1.5 cm, as well as 40 to 75% ferromagnesian minerals. Locally, leucocratic zones were also observed. Gabbro shows well-preserved magmatic textures and little recrystallization, with plagioclase regularly tabular or in laths. Ferromagnesian minerals form large poikilitic crystals more finely recrystallized in the core, as well as clusters defining glomeroporphyric textures. These minerals also show a zonation formed by a core of clinopyroxene surrounded by light green actinolite, followed by a rim of dark green hornblende. Clinopyroxene is locally completely replaced by amphiboles. In some areas, biotite clusters are attached to amphiboles. Altered zones are characterized by plagioclase saussuritization and chloritization of ferromagnesian minerals. With the exception of opaque minerals (magnetite or sulphides), gabbro contains a small amount of accessory minerals, with apatite, sphene and zircon being the most common. 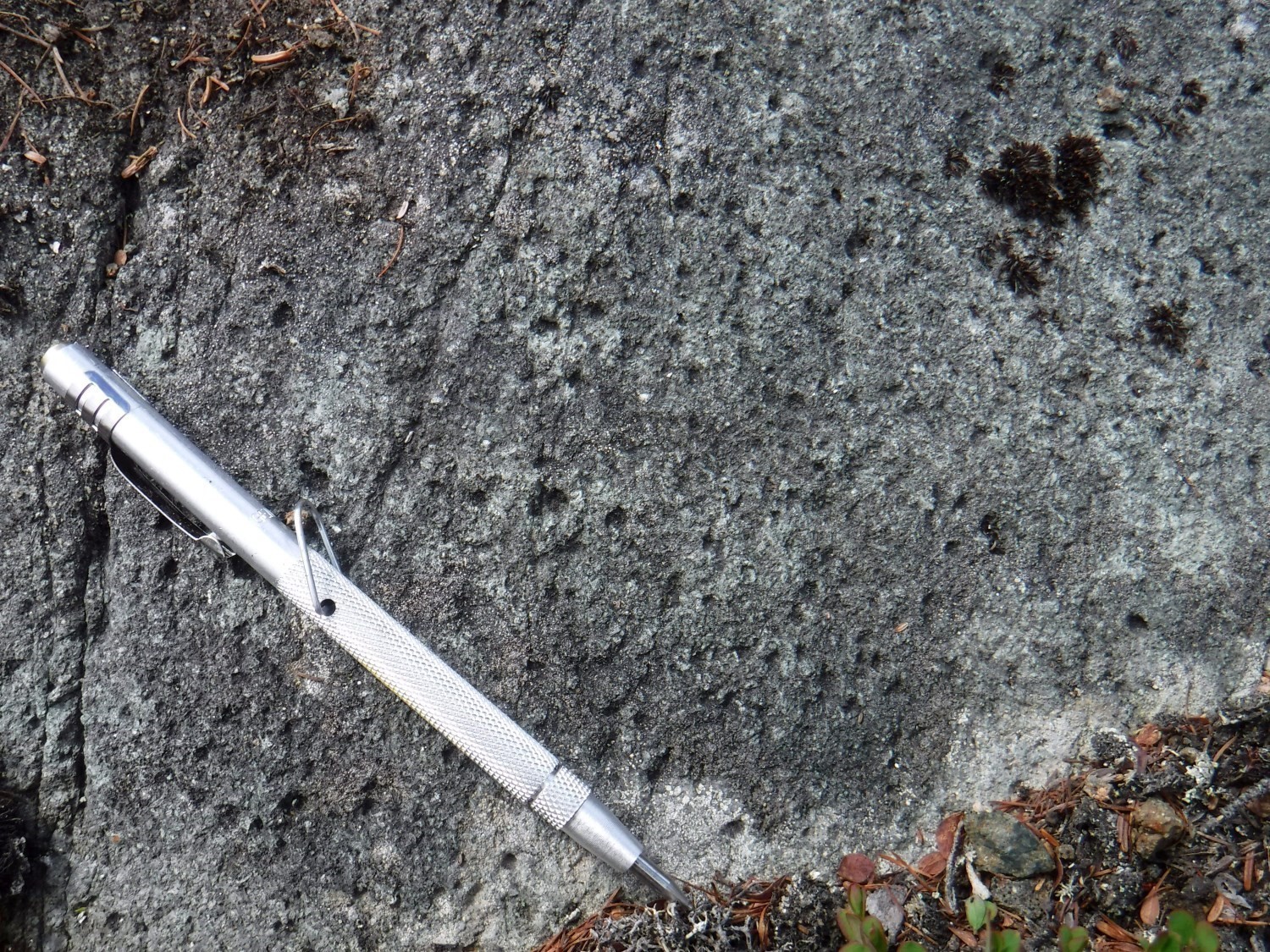 Meta-ultramafics were mainly observed in the southern part of the SECP. They consist of pyroxenite and peridotite, but the dominant facies is rich in actinolite, which appears to replace clinopyroxene, and includes small amounts of plagioclase, biotite, chlorite and opaque minerals. The rock is green, homogeneous and fine to medium grained.

The Tunulic Complex is approximately 260 km long along a NNW-SSE to N-S axis that coincides with the ZCrge alignment. It is located in the George Lithotectonic Domain (Charette et al., 2018) and is 3 ﻿km to 7 km wide, in the north-central part of the domain (Henrietta Lake area), and 3 ﻿km to 14 km in the Brisson Lake area (south-central part of the domain). Further south, the Tunulic Complex forms dismembered and folded kilometric klippes in tonalitic gneiss of the Saint-Sauveur Complex (ApPgss), or forms enclaves in the De Pas Supersuite (pPbdp). Van der Leeden (1994) reported that the Atshakash Complex (mostly represented by the nAtun2 unit) had an apparent thickness ranging from 0.7 to 2.4 km and a length of ~57 km.

Dating in a felsic metavolcaniclastic rock from an outcrop in the northern part of the Tunulic Complex yielded LA-ICPMS analyses scattered between the ages 2719 ±44 Ma and 2478 ±24 Ma. These ages were interpreted by Davis et al. (2018) to indicate that the metavolcanoclastic rock contains a strong component of post-Archean, but pre-Hudsonian detrital zircons. Results indicate that the Tunulic Complex was probably emplaced between 2719 and 2600 Ma. Other datings also gave crystallization ages between 2698 and 2643 Ma, confirming the Neoarchean age dominance of the Tunulic Complex.

The different units of the Tunulic Complex are cut by a whitish and granular granitic phase similar to that of the Guesnier Complex nApPges2 unit, as well as by granodiorite and granite dykes of the De Pas Granitic Suite (pPdep). The Tunulic Complex also occurs as klippes inside gneiss of the Saint-Sauveur Complex (ApPges), as well as as enclaves in intrusions of the De Pas Supersuite (pPbdp). Imprecise structural relationships between the different units of the complex do not allow to define the stratigraphic succession (van der Leeden, 1994).

Girard (1990) suggested that some of the rocks previously assigned to the George and Atshakash complexes would represent a highly deformed equivalent of rocks observed in the Nthusku Complex. The latter, however, corresponds to another volcano-sedimentary sequence, around 2373 Ma (Corrigan et al., 2018; Davis and Sutcliff, 2018), associated with the Mistinibi-Raude Lithotectonic Domain, located east of the ZCrge.