The Guesnier Complex was introduced by Charette et al. (2018) to group all migmatitic rocks and anatectic granites of the George Lithotectonic Domain. These rocks had previously been assigned to the Qurlutuq Complex (ApPqur) and Aveneau Suite (pPavn) by Simard et al. (2013), Lafrance et al. (2014, 2015, 2016) and Charette et al. (2016). However, as part of the synthesis of the Southeastern Churchill Province (SECP; Lafrance et al., 2018), different lithotectonic blocks have been identified; it appears that gneiss – and the resulting migmatites – observed within these different blocks are distinct from each other. The Qurlutuq Complex and Aveneau Suite are now restricted to the Baleine Lithotectonic Domain. The unit is named after the Guesnier River, which runs through sheets 24J07 and 24J02 near Ungava Bay.

The Guesnier Complex consists of two units: banded migmatitic rocks (nApPges1), and white anatectic tonalite and granite (nApPges2). Few samples were collected in the Guesnier Complex during the Ministère’s 1:250 000 mapping campaign that occurred between 2011 and 2017. However, tonalitic and granitic compositions appear to be in equivalent proportions within the unit’s different facies. This variation in composition appears to be related to the composition of gneiss affected by partial melting. 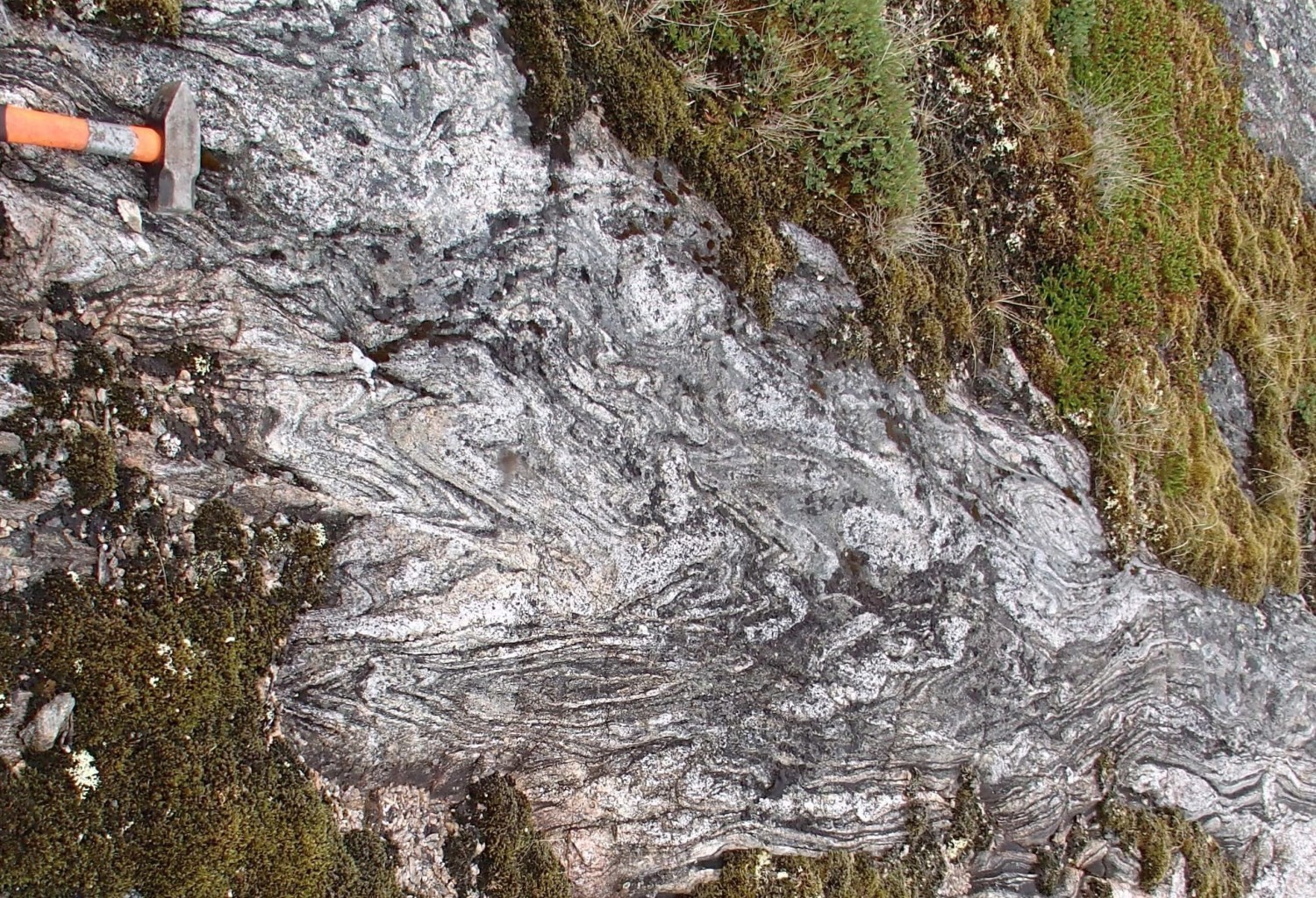 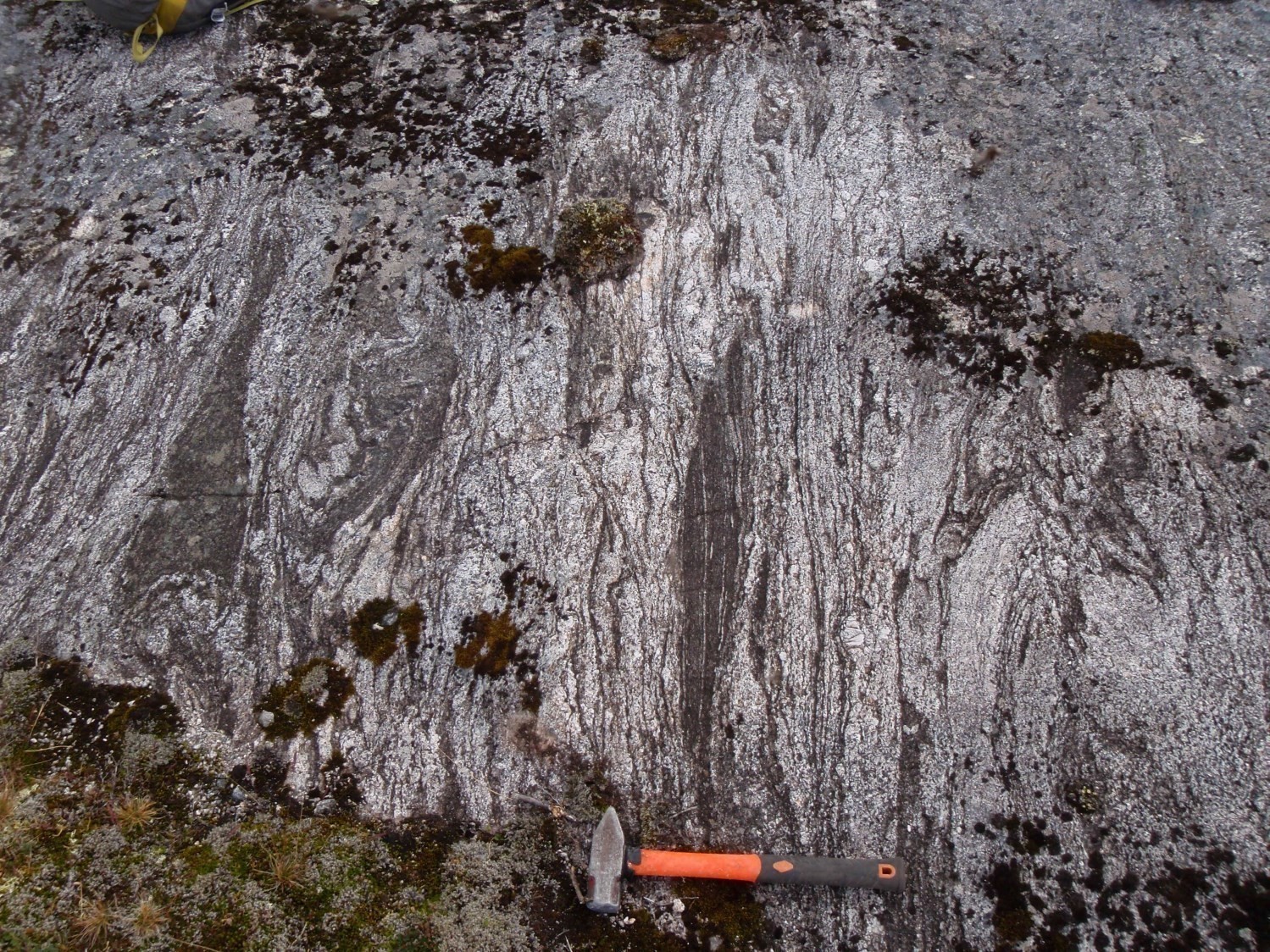 Unit nApPges1 is the main unit of the Guesnier Complex. Migmatites are heterogeneous, usually exhibiting a stromatic texture or containing numerous centimetre-to-metre-wide rafts (schollen) of gneiss and diorite. If displaying a stromatic structure, they consist of at least 50% leucosome in the form of leucocratic and undulating centimetric bands. Regardless of its composition (tonalitic or granitic), the neosome is whitish to light grey and fine to coarse grained. In addition to feldspar and plagioclase, it contains 8 to 25% biotite ± hornblende schlierens and 20 to 30% quartz, the latter forming large anhedral zones displaying undulatory extinction. Decimetric to decametric pockets of leucosome (accumulation of melting material), as well as injections cutting migmatitic banding, are also observed. All of these phases, including dismembered and absorbed enclaves and layers, form banding of migmatitic, irregular, undulating and discontinuous appearance.

In thin section, the rock has a variable grain size and large igneous grains alternate with finer clusters or bands whose grains are recrystallized. Schlierens also include a significant number of accessory minerals including epidote, apatite, sphene, opaque minerals, chlorite and zircon (as inclusions in biotite).

Unit nApPges2 rocks are similar to leucosome in migmatites of unit nApPges1. Both are commonly observed on the same outcrop, but unit nApPges2 postdates unit nApPges1. The nApPges2 unit could therefore correspond to an evolved phase related to the melting event at the origin of the Guesnier Complex. These rocks also contain up to 15% of centimetric to decimetric enclaves of other units in the area, particularly gneiss, migmatite and diorite. 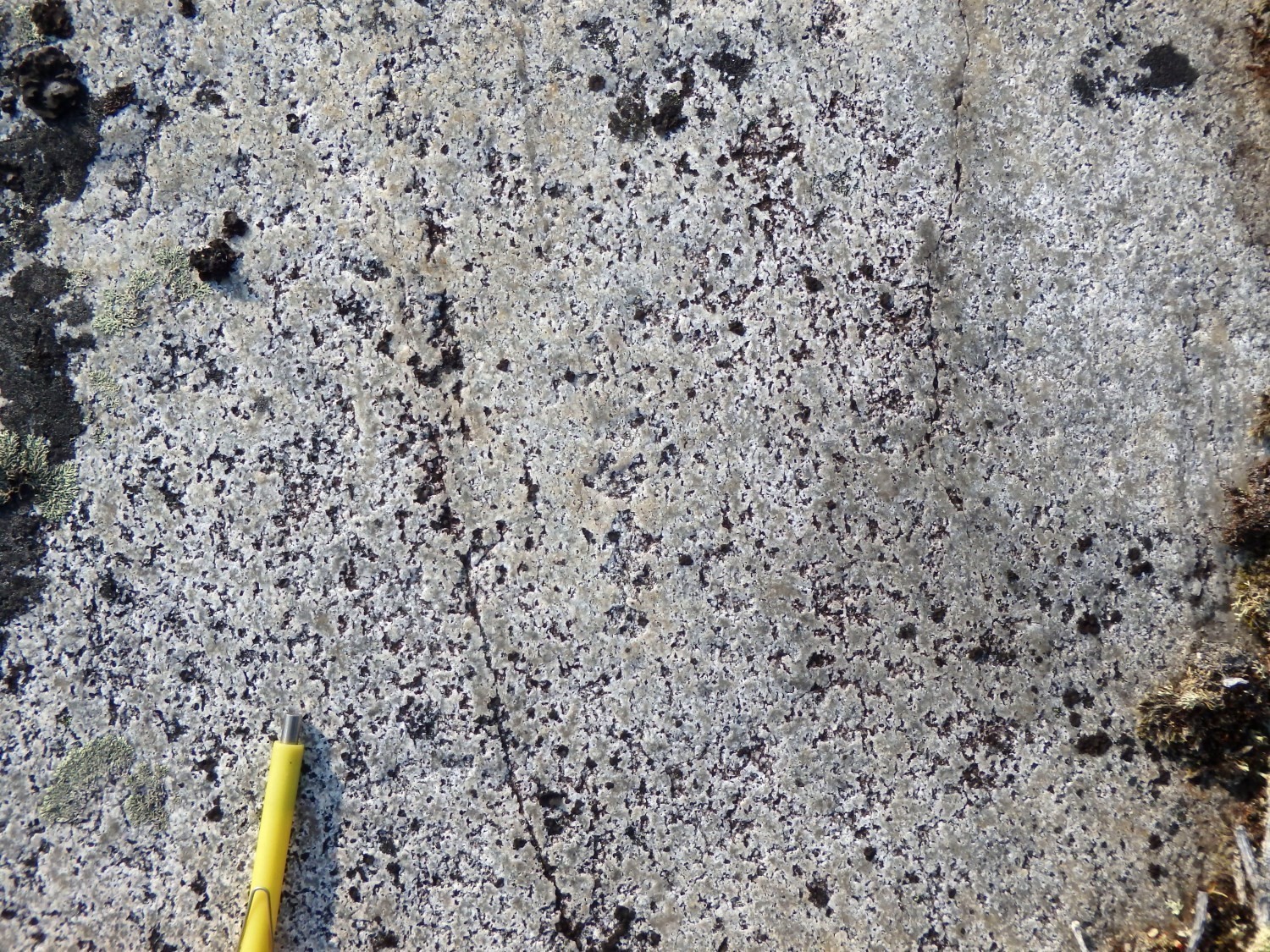 Unit nApPges2 consists of massive or weakly foliated white granite and tonalite containing a small proportion of ferromagnesian minerals (<5% brown biotite) commonly concentrated in schlierens. In several locations, these represent the only remnants of melted rocks. Foliation is mainly produced by the alignment of these schlierens. Anatectic intrusions vary from coarse to fine grained. Decimetric to metric pegmatitic clusters or irregular pockets, found in diffuse contact, are also present. The distribution of minerals is often uneven as they form large monomineralic zones. Reaction structures at grain contacts, as well as anti-perthitic and myrmekitic structures, are commonly observed in thin section. Quartz (30-35%) is anhedral and displays strong undulatory extinction. Accessory minerals are scarce and consist of muscovite, opaque minerals, sphene, epidote and zircon. 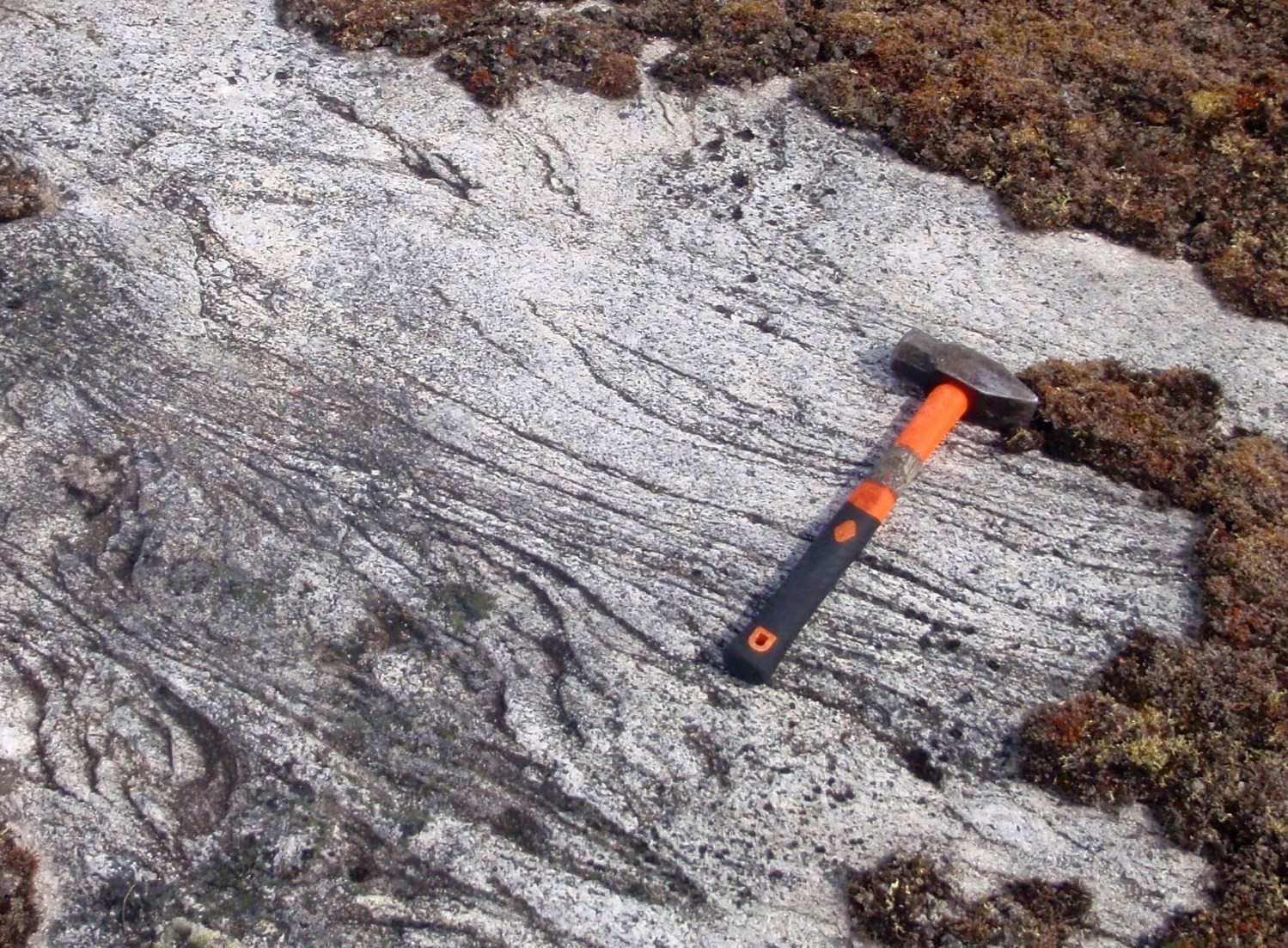 Subunit nApPges2a corresponds to zones where whitish intrusions of the Guesnier Complex are more heterogeneous due to the presence of 10 to 30% biotite schlierens in the rock and locally due to a larger proportion of partially assimilated enclaves. In these heterogeneous zones, samples are similar to migmatitic rocks of unit nApPges1. However, no banding is observed in outcrop or fresh exposure. 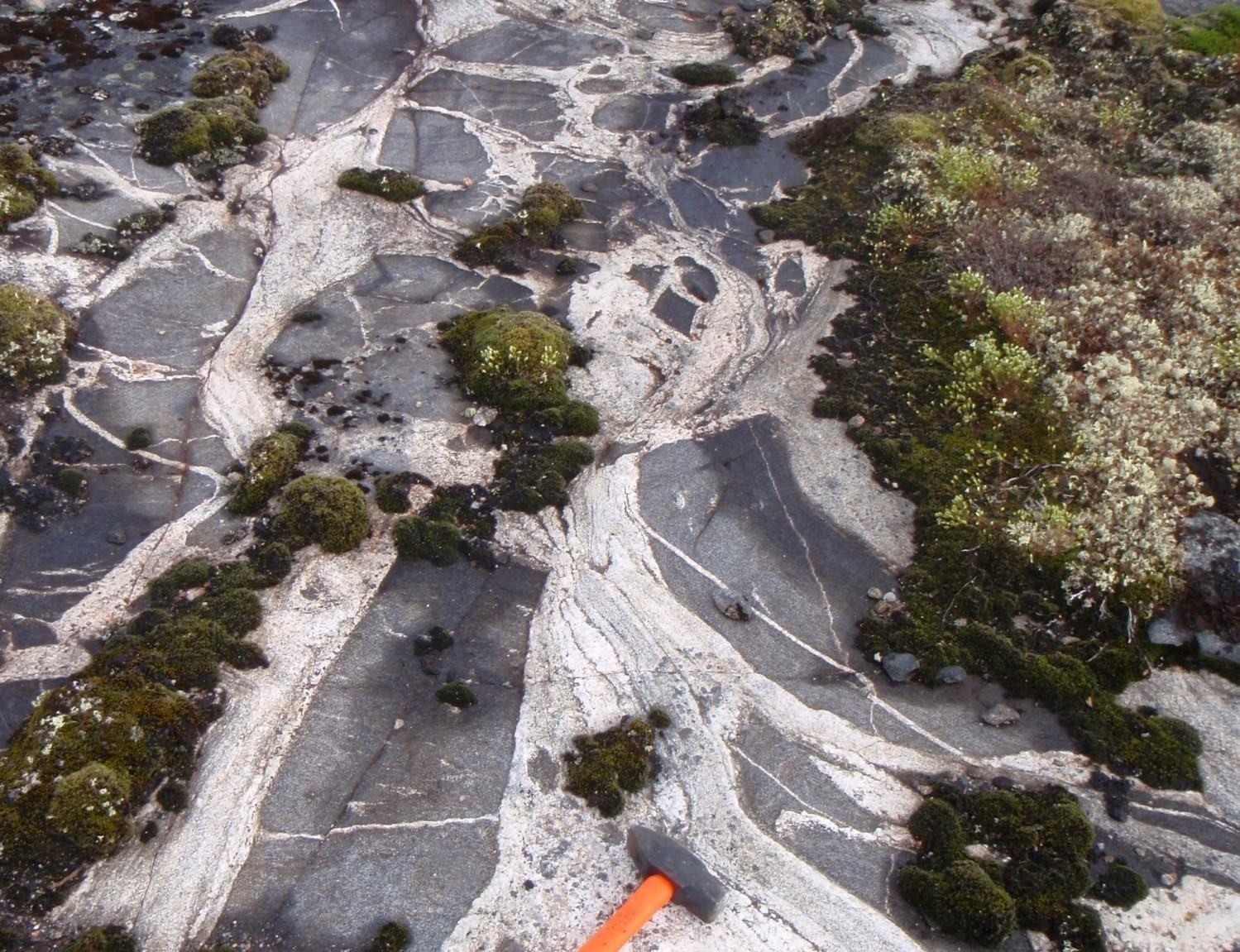 Subunit nApPges2b consists of tonalite and granite similar to those of unit nApPges2, but comprising between 30 and 40% enclaves of fine-grained and highly magnetic diorite, commonly giving a magmatic breccia appearance to the outcrops. Diorite found in enclaves is granoblastic, even grained and contains ~20% ferromagnesian minerals, mainly brown biotite and a small proportion of hornblende. It contains accessory epidote, sphene, magnetite, chlorite, quartz, apatite, zircon and allanite.

The Guesnier Complex is restricted to the George Lithotectonic Domain and is more abundant in the northern part of the latter. Unit nApPges1 forms the majority of observed outcrops and covers an area of ~578 km2. Unit nApPges2 (98 km2) comprises some 20 intrusions, the largest of which is 12 km by 2 km. A decrease in the proportion of rocks belonging to the Guesnier Complex observed in the southern portion of the George Lithotectonic Domain possibly reflects the fact that gneiss and migmatites were not distinguished during mapping of this area by various geologists of the Ministère in the 1980s.

A migmatite sample collected in the summer of 2014 by the Geological Survey of Canada on an outcrop that also included gneiss yielded an age of ~2687 Ma for the protolith and a metamorphic age of ~1901 Ma (Corrigan et al., 2018). This sample was collected in the southwestern portion of the Henrietta Lake area (sheet 24H03).

Machado et al. (1989) also dated a migmatite on the edge of Ungava Bay that they associated with the De Pas Supersuite but, according to Simard et ﻿al. (2013), it would belong to the Qurlutuq Complex (now reassigned to the Guesnier Complex) instead. This migmatite contains four generations of zircons, of which the minimum ages of the three oldest are 2688 ﻿Ma, 2779 ﻿Ma and 2922 Ma, and a metamorphic age on monazite of 1808 ±2 Ma.

Despite the ages obtained, field observations suggest that the Guesnier Complex may be Paleoproterozoic. This hypothesis is supported by the fact that the neosome postdates the formation of gneissosity in Saint-Sauveur Complex gneiss and that the leucosome is minimally deformed and recrystallized, thus probably late-tectonic. Also, geochronological data obtained across the SECP show that a significant crystallization event of partial melting products occurred between ~1820 to 1800 Ma (Charette et al., 2018), which could result in migmatites of the Guesnier Complex. Archean ages could therefore be related to the presence of paleosome in the collected samples.

Migmatitic rocks of the Guesnier Complex are spatially associated with gneiss of the Saint-Sauveur Complex, with which they are in gradual and undefined contact. However, migmatitic rock banding is irregular, undulating, discontinuous and often chaotic, distinguishing it from the straighter and more regular gneiss banding. Taylor (1979) also referred to this relationship between migmatites and gneiss and noted that the boundary between the two units had often been drawn arbitrarily during his reconnaissance work. Migmatites of the Guesnier Complex also contain many preserved enclaves and layers of Saint-Sauveur Complex gneiss. The presence of these preserved layers and their spatial association with migmatites indicate that the latter are the result of partial melting of Saint-Sauveur Complex gneiss.

Migmatitic rocks of the Guesnier Complex (nApPges1) are found as enclaves in the various Paleoproterozoic intrusive units of the De Pas Supersuite. Anatectic granite and tonalite seem rather contemporary to the intrusion of the De Pas.