The term « Saint-Sauveur Gneiss » was introduced by Hammouche et al. (2011) in the Bonaventure Lake area (sheets 23I15 and 23P02) to group all the gneiss between the Lac Tudor and Rivière George shear zones. Further north, Simard et al. (2013) and Lafrance et al. (2014, 2015, 2016) had previously assigned gneiss between these two shear zones to the Ungava Complex, which then included all the gneiss in the Southeastern Churchill Province (SECP). However, as part of the SECP synthesis by Lafrance et al. (2018), different lithotectonic blocks have been identified and it appears that gneiss observed within these different blocks are distinct from each other. Gneiss of the George Lithotectonic Domain were then reassigned to the Saint-Sauveur Complex. The term complex is now used to comply with the North American Stratigraphic Code. The unit name is taken from Saint-Sauveur Lake, located at the Quebec-Labrador border, in the SE corner of sheet 23I15. 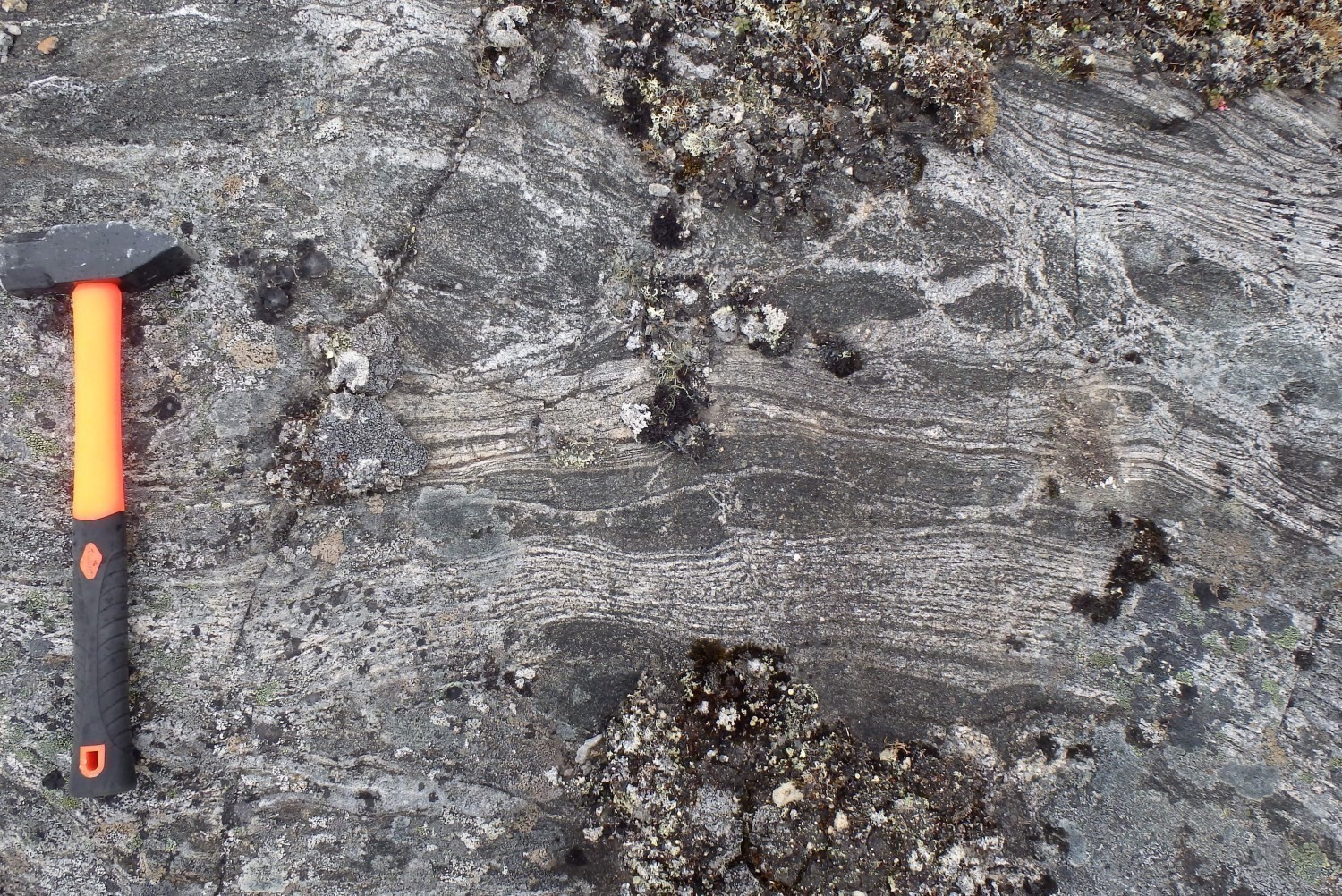 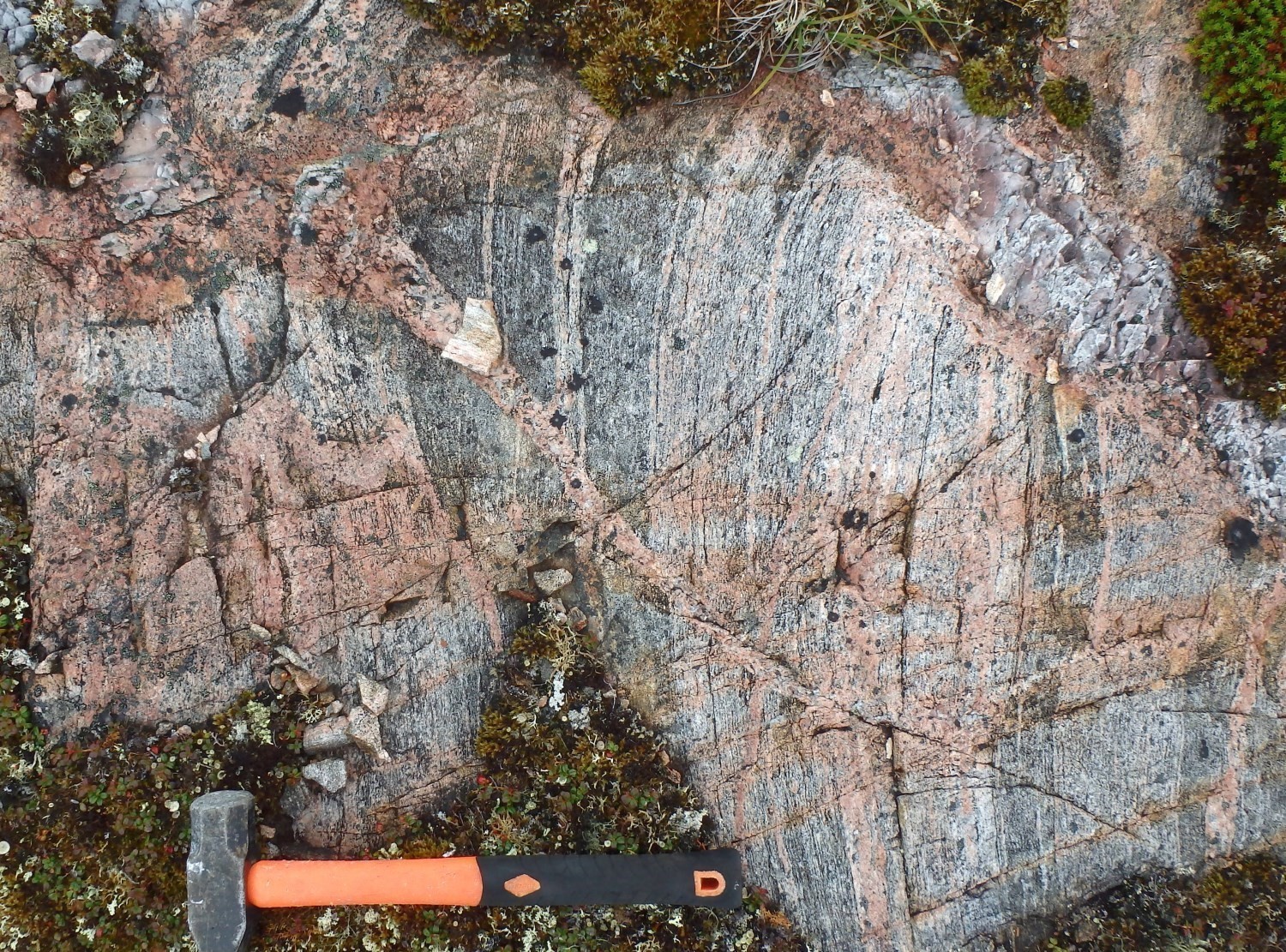 The Saint-Sauveur Complex consists mainly of gneiss varying from tonalitic (nAgss1) to granitic (nAgss2), more locally of intermediate composition. Metric zones of migmatitic paragneiss are locally part of the unit. Gneiss commonly contain fine-grained diorite and amphibolite enclaves, irregular and lenticular in shape, as well as subrounded or boudinaged. It is cut by late injections of granite and tonalite occurring as clusters and bands that are 5 to 30 cm wide. Banding in gneiss is not always well defined and regular. However, it is commonly accentuated by the presence of pink granitic injections subconformable to gneissosity. Gneiss are affected by migmatization evidenced by centimetric apophyses of quartzofeldspathic material cutting gneissic banding. They are also mylonitized in places. 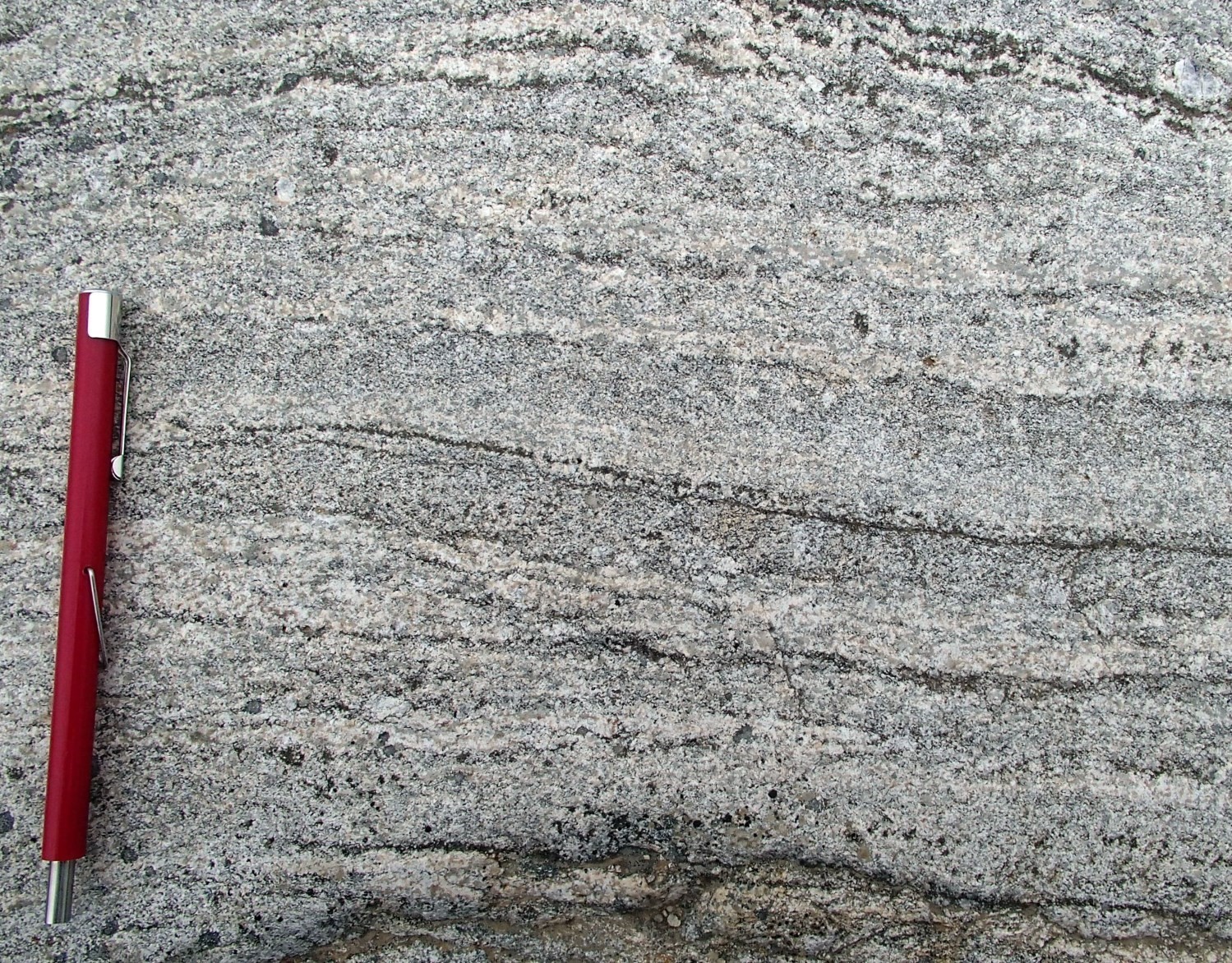 Unit ApPgss1 gneiss is predominantly tonalitic in composition, and displays centimetric to decimetric bands and layers of quartz diorite locally. It is medium to light grey, fine to medium grained and contains 5 to 25% millimetre to centimetre-wide and more or less diffuse whitish bands. Several of these bands show the same recrystallization rate as the main gneiss component, while others represent leucosome or parallelized injections and are slightly coarser. Tonalitic gneiss is well foliated and partially to well recrystallized, especially at grain edges. It contains 5 to 20% ferromagnesian minerals (brown biotite ± hornblende) that define foliation, concentrated in laminae and in some bands, and locally occur as clusters. Quartz (20-30%) is rather anhedral and shows a strong undulatory extinction. K-feldspar, usually sparse, can account for up to 7% of the rock. Alteration minerals such as sericite on plagioclase and chlorite on biotite, as well as hornblende, are commonly observed in thin section. The main accessory minerals are: in order of importance, epidote, muscovite, opaque minerals, apatite, zircon (as inclusion in biotite), sphene, allanite and carbonate. 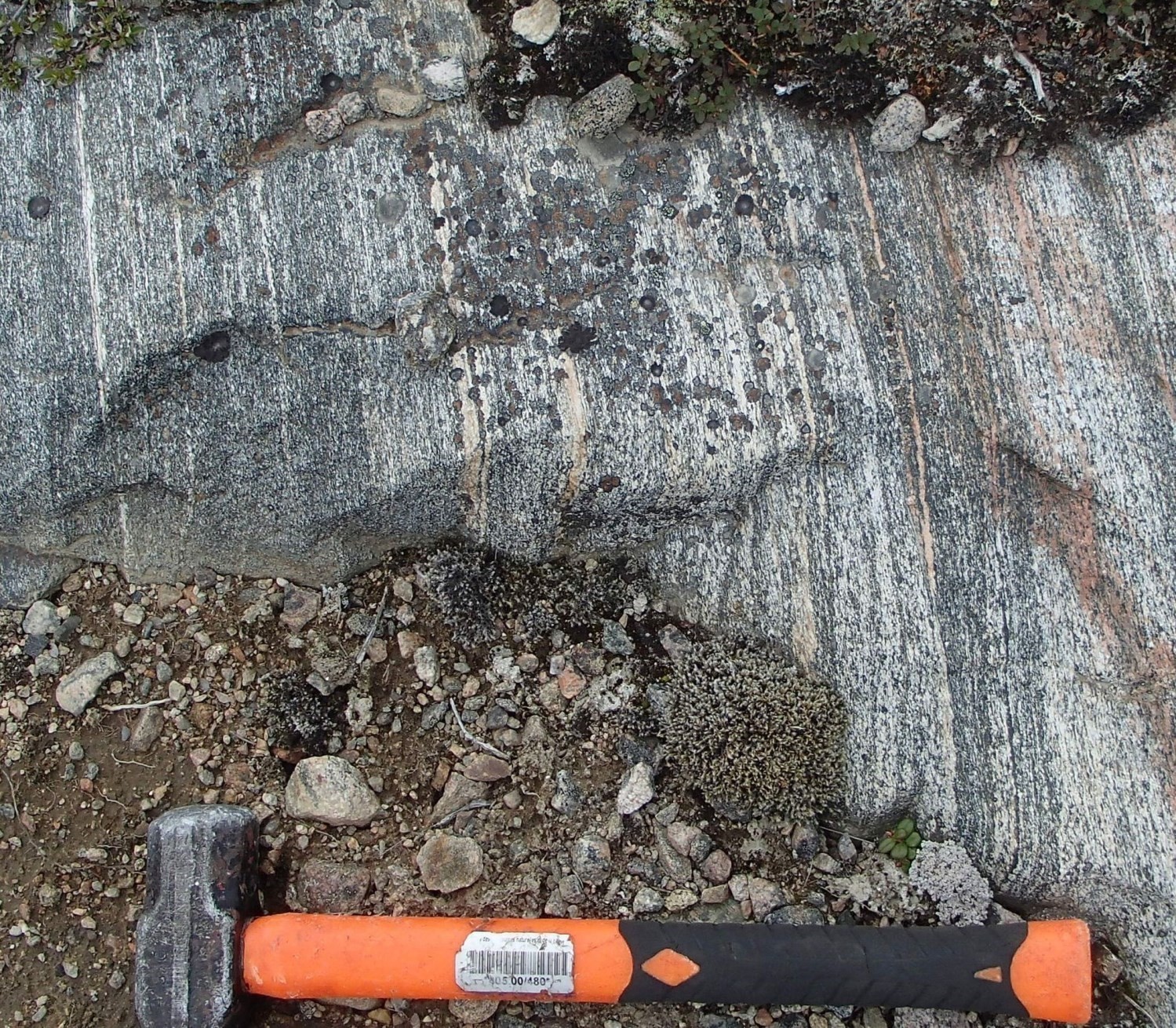 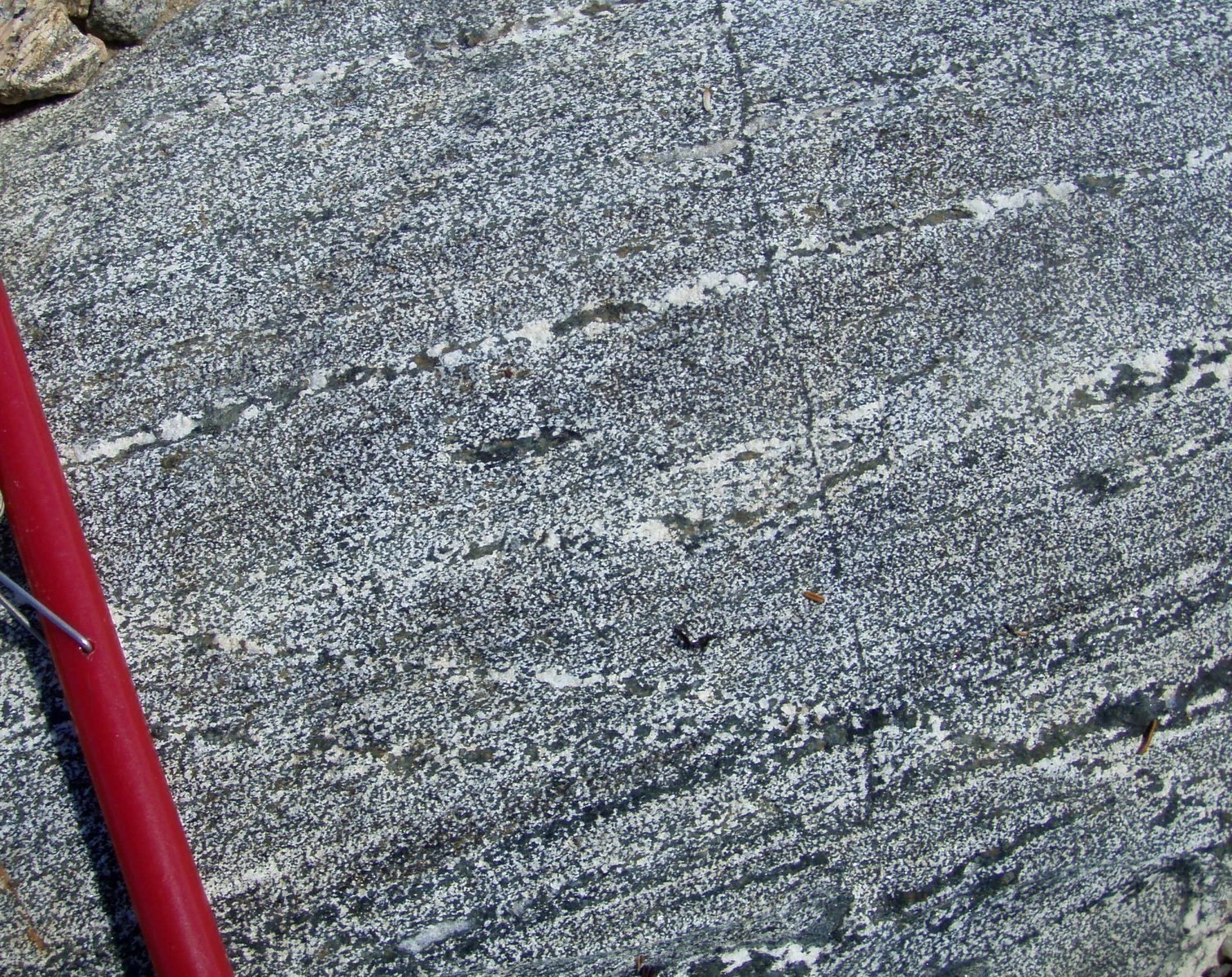 The darker gneiss, which has a composition ranging from diorite to quartz diorite, was assigned to unit nAgss1a. This subunit is interstratified with unit ApPgss1 tonalitic gneiss in decimetric to kilometric layers. It commonly shows partial melting evidence in the form of whitish leucosome in clusters or millimetric to centimetric diffuse bands. Ferromagnesian minerals are the same as in the ApPgss1 unit, but in greater proportions (20-30%), particularly hornblende. Clinopyroxene is present locally, replaced to varying degrees by hornblende. The rock contains 2 to 10% quartz and up to 3% K-feldspar. Structures and accessory minerals observed in thin section are similar to those of unit ApPgss1. 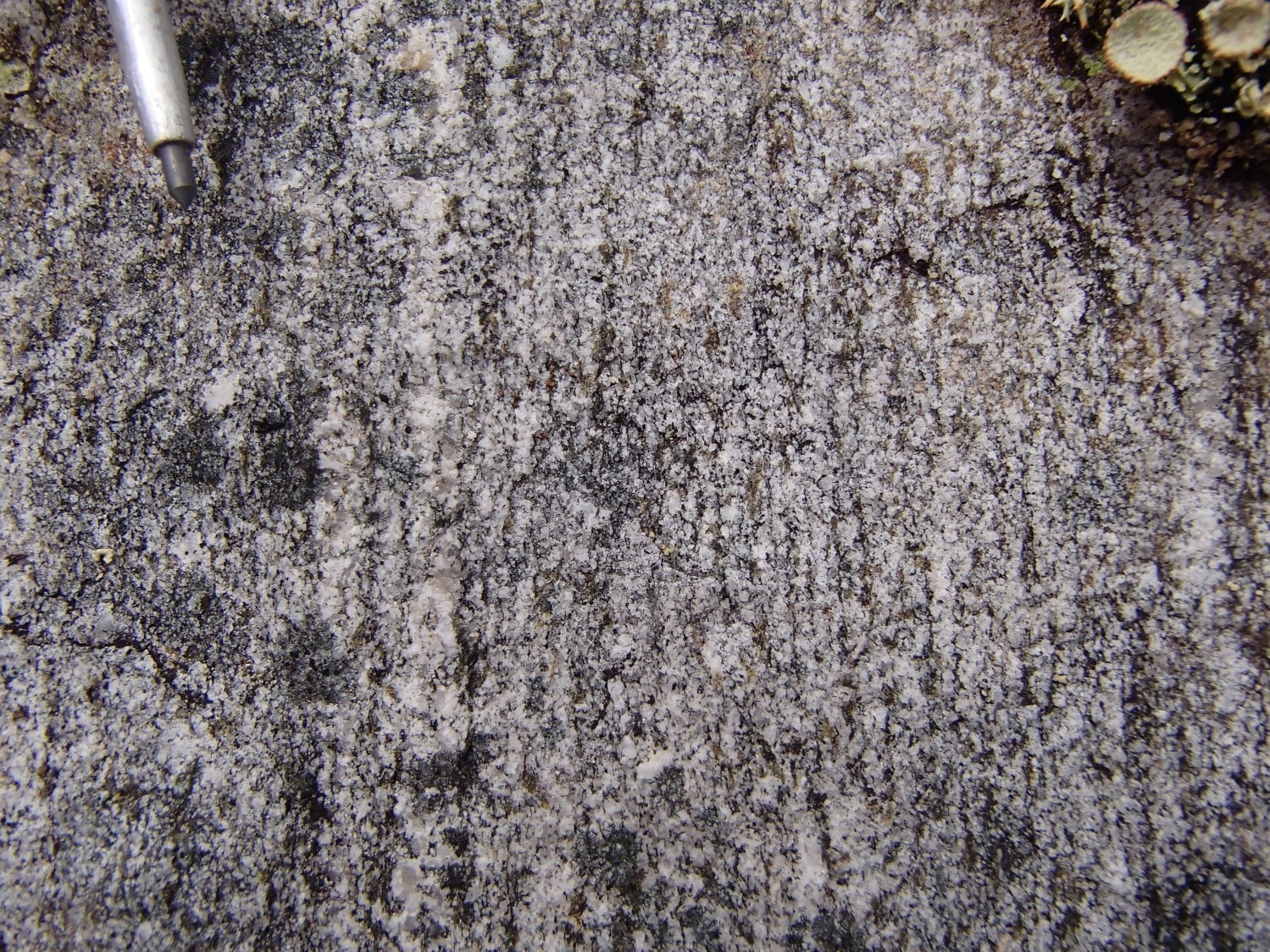 Unit nAgss1b, previously assigned to unit nAqur2 of the Qurlutuq Complex (Simard et al., 2013), consists of homogeneous tonalite zones within large gneiss and migmatite units of the George Domain. Simard et al. (2013) suggest that these tonalites represent precursor layers that would have been preserved following deformation and partial melting episodes in the Central Zone in the Paleoproterozoic. Because of their similarities to Saint-Sauveur Complex tonalitic gneiss and of their location, they were reassigned to this unit during the SECP synthesis. In fact, homogeneous tonalite zones are likely to be included in unit nAgss1.

Tonalite is homogeneous, light grey to whitish grey, generally well foliated and contain 3 to 18% ferromagnesian minerals (green or brown biotite ± hornblende). It is medium to fine grained and very well recrystallized. The presence of centimetric leucosome bands in tonalite indicates that it has undergone partial melting. It contains 20 to 35% quartz, 1 to 8% K-feldspar and mostly epidote and allanite. Other accessory minerals seen in thin section are sphene, muscovite, apatite, opaque minerals and carbonate. 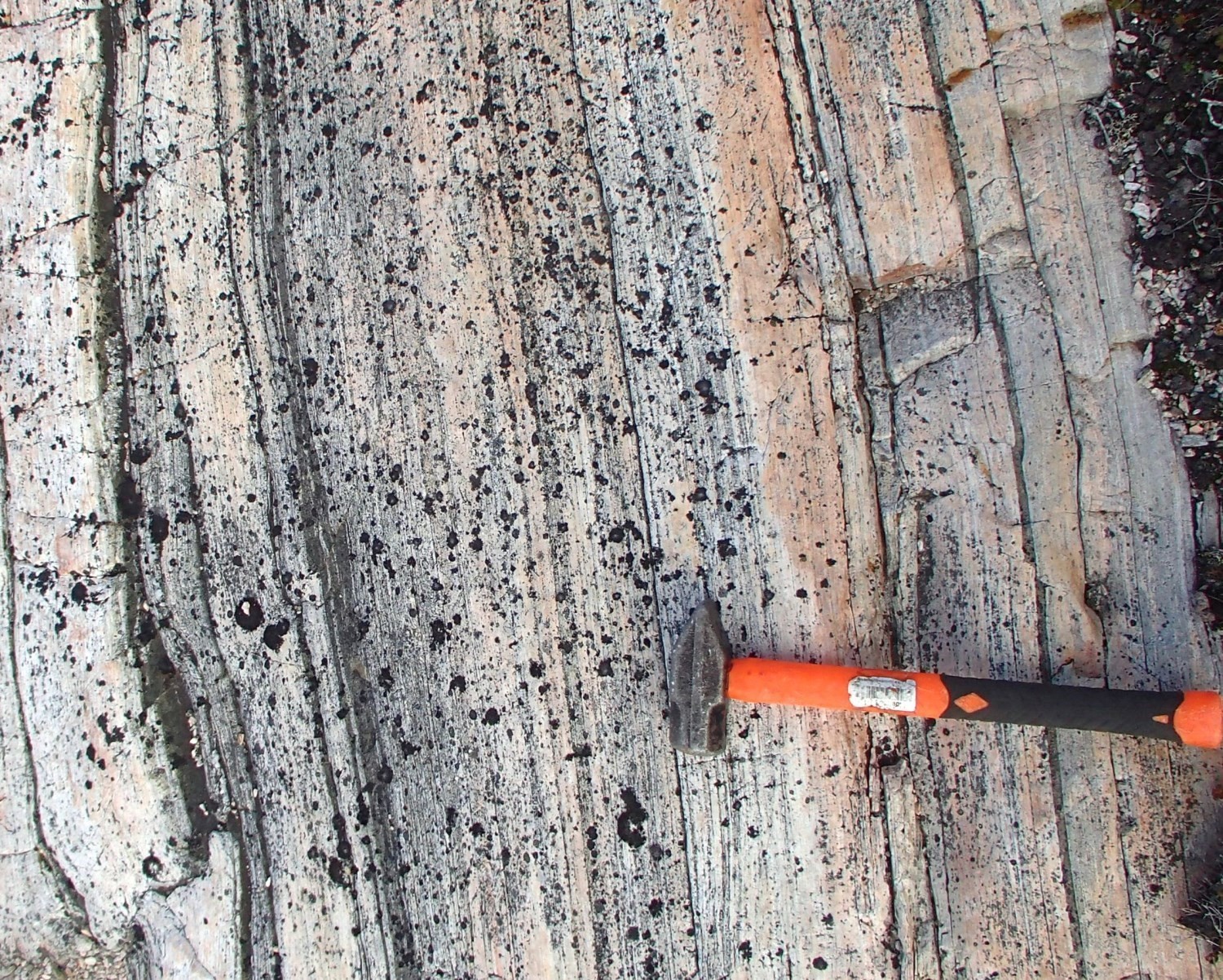 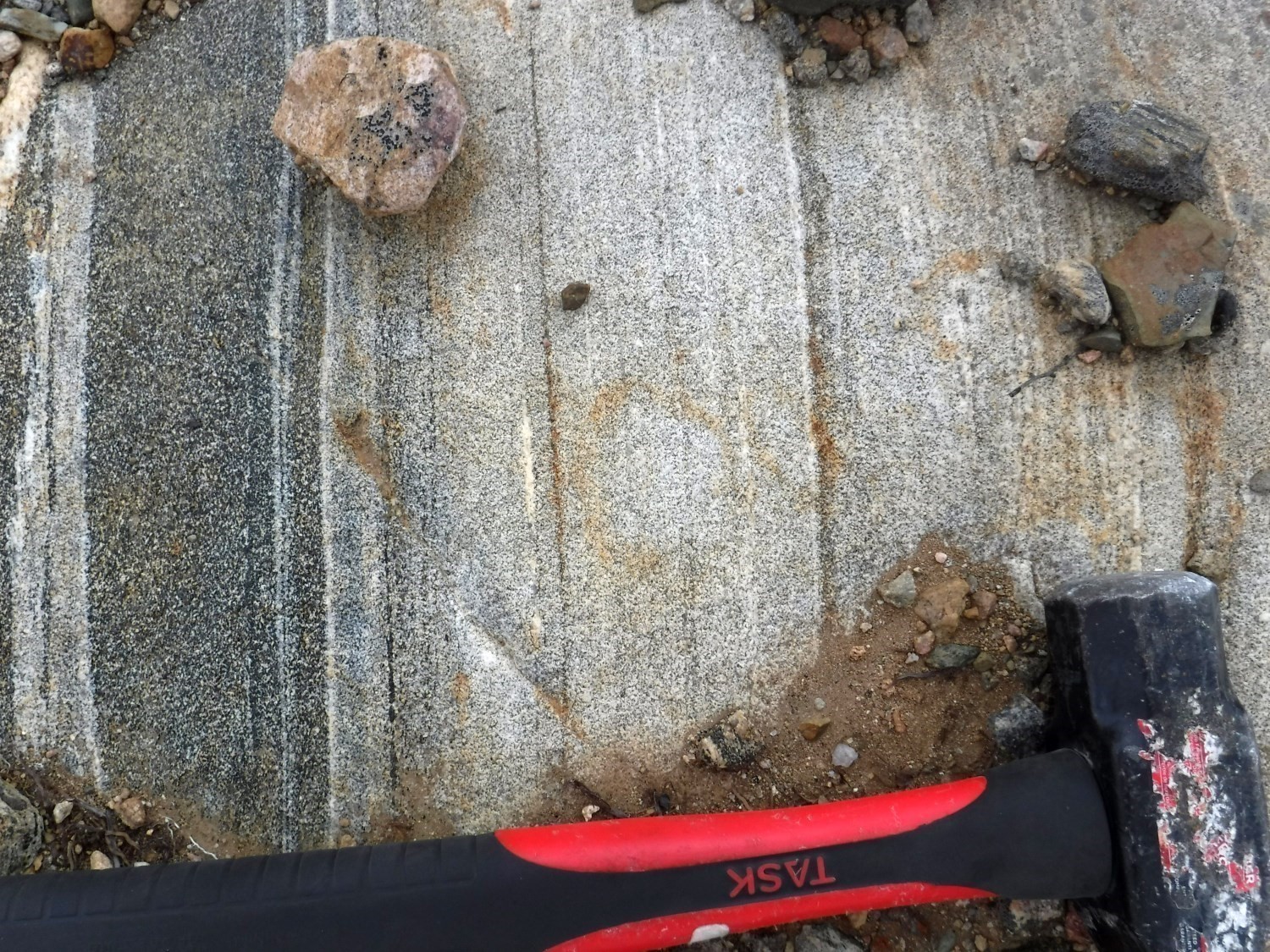 In the field, unit nAgss2 granitic gneiss is difficult to distinguish from unit nAgss1 tonalitic gneiss. However, it regularly contains a larger proportion of pinkish bands conformable to gneissosity, in addition to whitish bands. Thin sections and stains also highlighted a high content of K-feldspar (15-35%) in the grey part of gneiss and in whitish bands. Granitic pink bands are millimetric to centimetric and slightly coarser than the gneiss’ grey portion. Ferromagnesian minerals (3-20%) consist of biotite flakes aligned with foliation and containing zircon inclusions, locally associated with some hornblende. Accessory minerals are sparse and include epidote, allanite, apatite, opaque minerals, muscovite, sphene and chlorite. 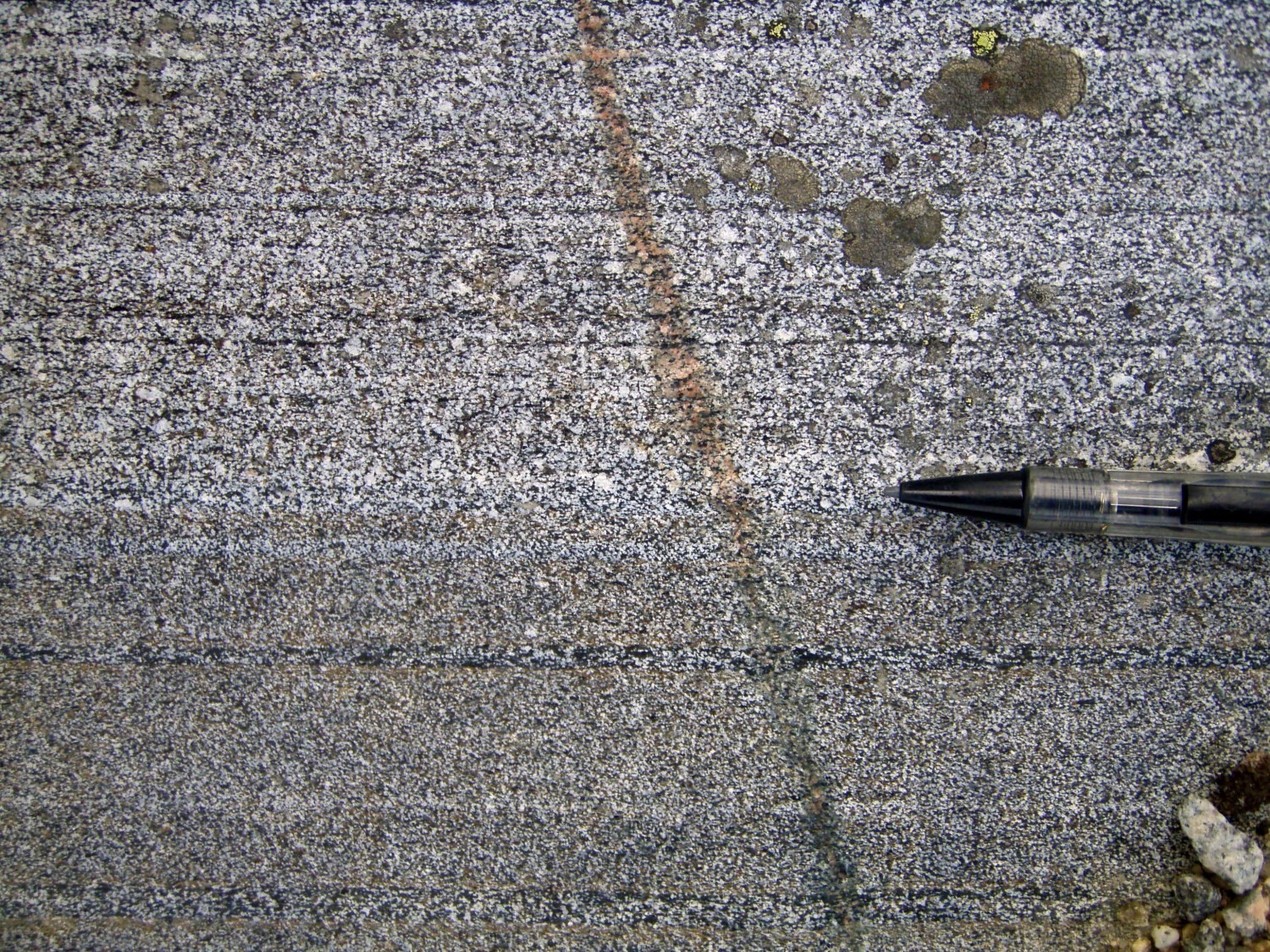 Unit nAgss2a groups gneiss of intermediate and potassic composition of the George Lithotectonic Domain. In the field, these gneiss have been described as dioritic gneiss more or less migmatized similar to those of unit nAgss1a. However, they commonly contain pink granitic bands. Stains and thin sections also highlighted the presence of 12 to 35% K-feldspar and 5 to 10% quartz. These rocks contain 15 to 30% green hornblende and brown biotite, usually forming bands rich in accessory minerals, the main ones being epidote, sphene, opaque minerals, apatite, allanite, zircon and hematite. In thin section, the rock shows a very fine recrystallization between coarser grains.

The Saint-Sauveur Complex is restricted to and observed throughout the George Lithotectonic Domain (Charette et al., 2018). Unit nAgss1 covers a significant area of 2315 km2. It is concentrated on the eastern edge of the George Domain in the southern part of the SECP, while it is distributed across its full width northward. Units nAgss1a (488 km2) and nAgss1b (140 km2) were only observed in the northern part of the George Domain. Unit nAgss2 (912 km2) is present throughout the domain, while subunit nAgss2a (57 km2) is concentrated in the east-central portion, near the junction between the Rivière George and Moonbase shear zones.

The Neoarchean age of ~2663 Ma is interpreted as the age of tonalite emplacement, whereas the Proterozoic age of ~1818 Ma would correspond to that of metamorphism and possibly to the partial melting event that affected Archean gneiss to produce migmatites and anatectic granites of the Guesnier Complex. The Neoarchean age of the Saint-Sauveur Complex is confirmed by a prelimiary age of ~2686 Ma. Zircons in sample 15-BC-6152A form four age groups: 2600 ±23 Ma, 2634 ±30 Ma, 2665 ±7 Ma and 2683 ±8 Ma (David, personal communication, 2018). Such a distribution of age with younger ages less represented reflects the influence of a Paleoproteozoic thermal event on Archean zircons.

Gneiss of the Saint-Sauveur Complex are spatially associated with migmatitic rocks of the Guesnier Complex, with which they are in gradual and undefined contact. Taylor (1979) also mentioned that the boundary between these two units had often been drawn arbitrarily during his reconnaissance work.

The Saint-Sauveur Complex occurs as enclaves in units of the De Pas Supersuite and is cut by them. It also includes tectonic klippes of volcano-sedimentary units of the Tunulic Complex (nAtun) with which it is commonly in fault contact.