In the vicinity of deformation zones, paragneiss and diatexites of the Mistinibi Complex develop a mylonitic fabric confined to decametric to hectometric deformed layers. These layers also show quartz banding characterized by subgrains and strong undulatory extinction, as well as the presence of porphyroclasts in a very fine-grained recrystallized matrix.

On outcrops, unit pPmis1 paragneiss commonly contains decimetric to metric layers of fine-grained amphibolite, locally stretched and boudinaged. It is almost systematically cut by centimetric to metric injections of coarse-grained white granite similar to that of unit pPmis4. Diatexite of the same type as that of subunit pPmis3a is observed in decimetric layers within migmatized paragneiss and is interpreted as a more evolved partial melting product. 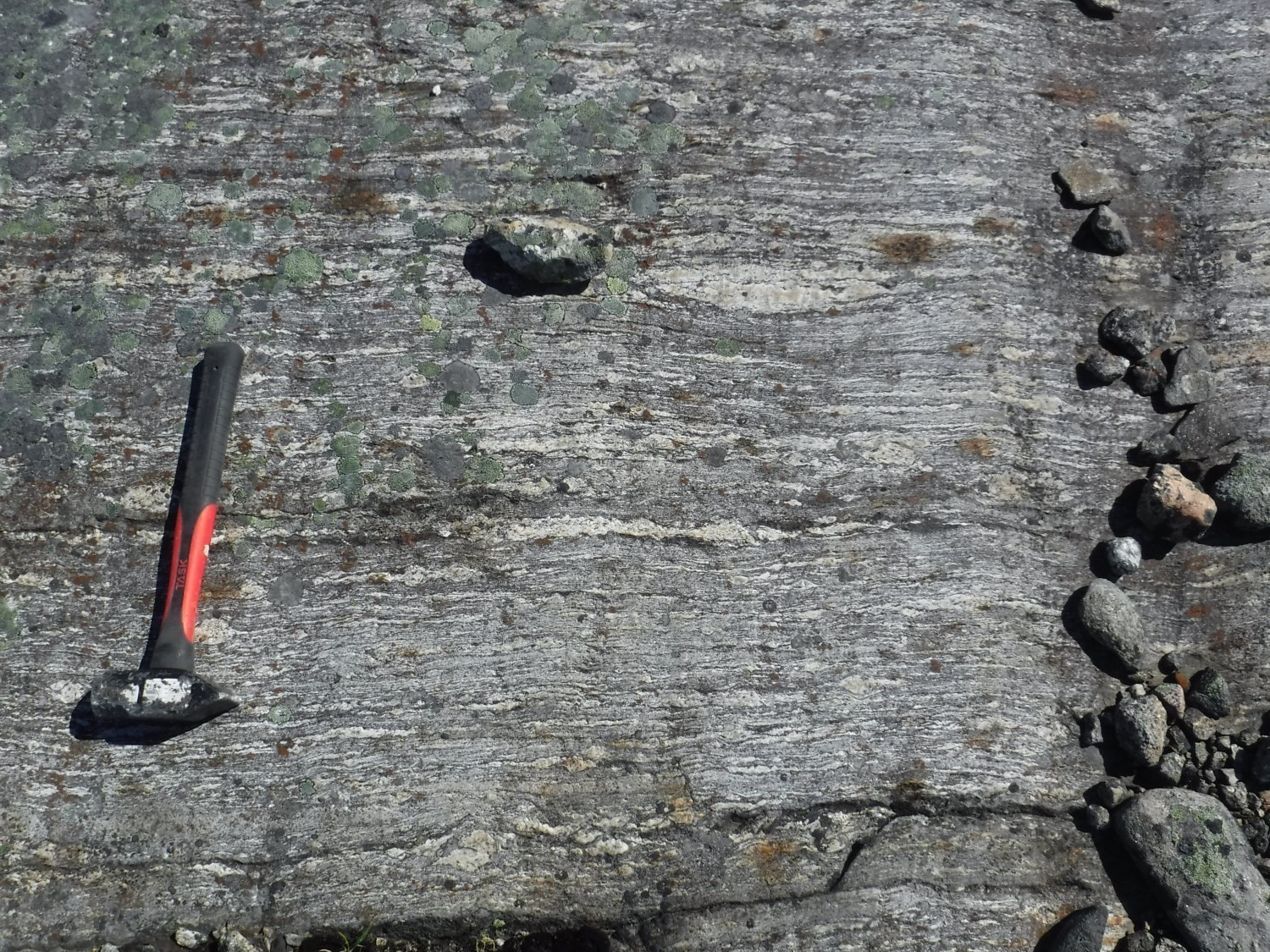 Unit pPmis1 paragneiss is generally described as fine-grained, moderately to very well recrystallized, light to medium grey in fresh exposure and light grey or rusty brown in altered patina. The rock has a banded texture marked by alternating centimetric to metric bands characterized by variations in the proportion of the main minerals. This texture is accentuated by the presence of 2 to 30% millimetric to decimetric bands of medium to coarse-grained whitish to pinkish granitic leucosome. These bands are commonly folded, boudinaged or discontinuous and define a mesh or stromatic texture. In places, the leucosome contains millimetric to centimetric garnet crystals. Staining on these paragneiss highlight the abundance of K-feldspar (5-35%) and its heterogeneous distribution. Some bands are devoid of K-feldspar, while others are rich. In general, the leucosome is richer in K-feldspar than paragneiss (restite). Ferromagnesian minerals (7-20%) are well aligned in foliation and consist of brown to red biotite accompanied locally by green hornblende. 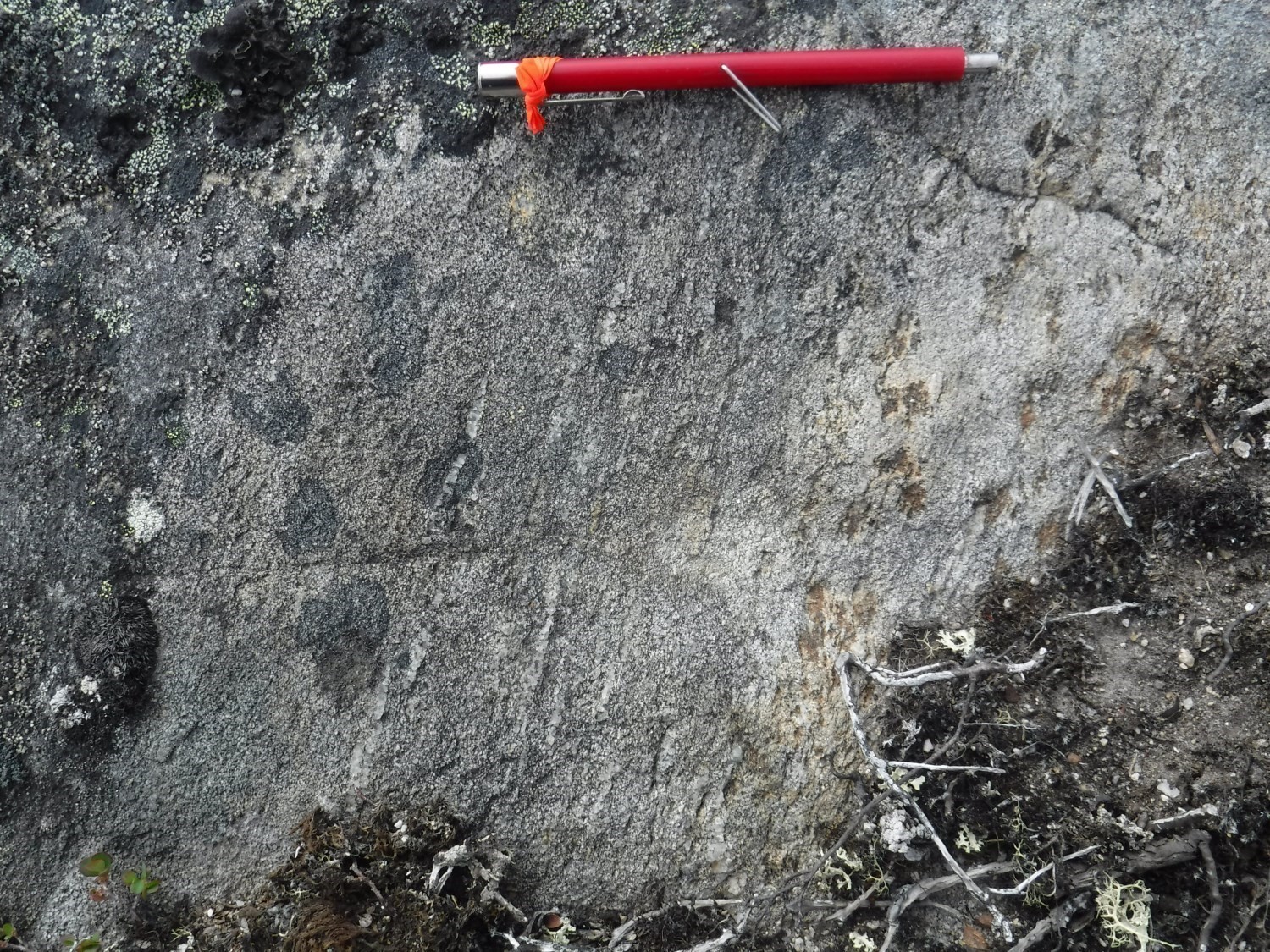 Subunit pPmis1a groups hypersthene paragneiss observed mainly at the eastern edge of the Mistinibi Complex, near the Mistastin Batholith contact. On outcrops, paragneiss of this subunit is comparable to that of unit pPmis1, except in a few places where it has a brown-greenish alteration patina. Orthopyroxene is generally easily identifiable to the naked eye, but occurs in places as fine crystals that are only recognizable under the microscope. Centimetric grey-brownish nodules are locally observed in subunit pPmis1a paragneiss. These are composed of anhedral garnet partially replaced by orthopyroxene, plagioclase and fine biotite flakes that define a coronitic texture. Locally, andalusite forms clusters in association with cordierite. The presence of cordierite and andalusite, on the one hand, as well as retrogressive metamorphism of garnet in orthopyroxene and plagioclase on the other, could be associated with contact metamorphism related to intrusion of the Mistastin Batholith into paragneiss and diatexite of the Mistinibi Complex. 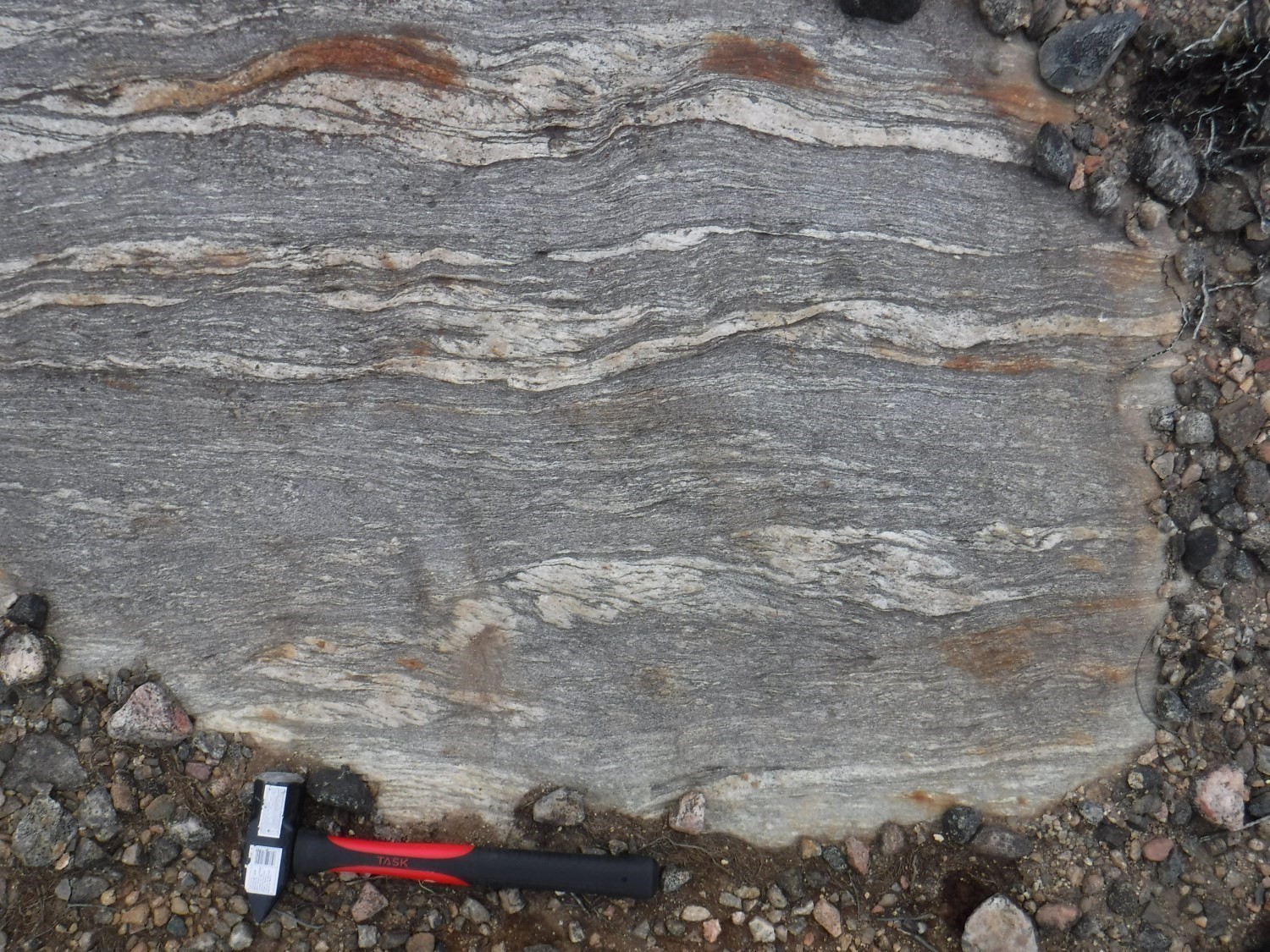 Unit pPmis2 consists of fine to medium-grained medium to dark grey quartzofeldspathic gneiss (interpreted as paragneiss). Its alteration patina is darker grey, brownish in places. This more or less recrystallized paragneiss exhibits migmatitic banding represented by 10-30% centimetric bands of medium to coarse-gained white or locally pinkish leucosome. These bands are commonly lined with biotite and muscovite and are lenticular and folded in places. Unlike unit pPmis1, banding associated with compositional variations is not consistently present. The composition of this paragneiss varies from felsic to intermediate. It contains 10-25% brown biotite with occasional muscovite, garnet and fibrous sillimanite (fibrolite). Where present, garnet forms porphyroblasts or syn-kinematic poikiloblasts locally characterized by fractures filled with chlorite. Accessory minerals are sparse and include magnetite, epidote, apatite, zircon, chlorite, allanite and tourmaline. Subrounded and lenticular plagioclase porphyroclasts are in places observed in a partially to completely recrystallized fine-grained matrix. 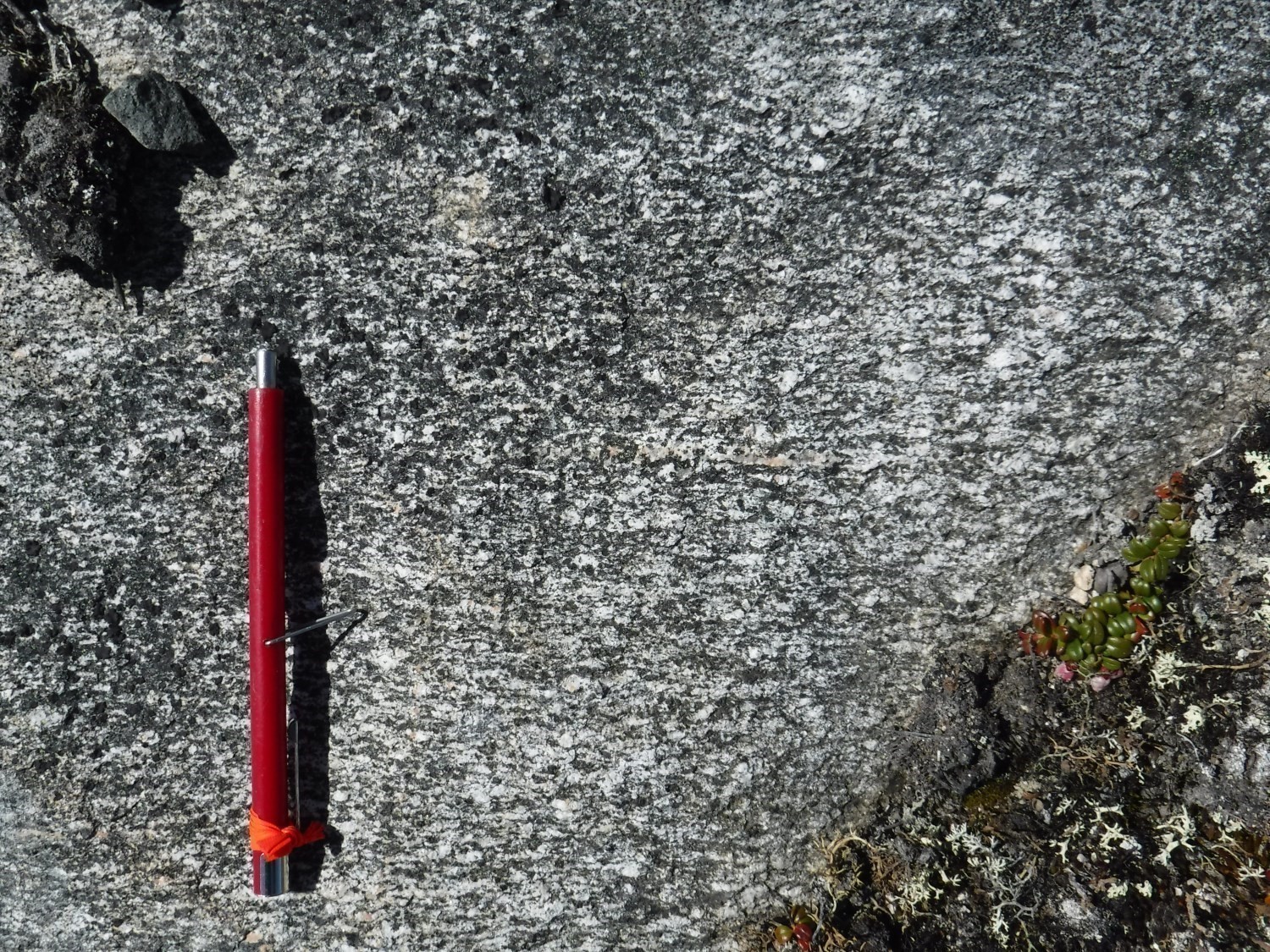 In some places, paragneiss has an intermediate composition and is characterized by a greater content in ferromagnesian minerals (25-60%). In these areas, ferromagnesian minerals consist of brown-green biotite, light green hornblende or actinolite. The well-recrystallized rock also contains a significant amount (1-15%) of euhedral epidote and sphene. Amphibole is generally coarser and poikilitic.

Owen (1989) reports calcic paragneiss, and marble and quartzite beds in the SE portion of the Mortel Lake area (sheet 23P10). These lithologies were grouped into subunit pPmis2ab. This author mentions that paragneiss is very similar to that of unit pPmis2, except for the presence of sillimanite and graphite that have been more consistently observed. Carbonate rocks are composed of calcite, completely serpentinized olivine and talc. Rust zones consisting mainly of pyrite and pyrrhotite locally associated with chalcopyrite were observed in paragneiss. Quartzite contains >80% quartz and <5% green mineral (diopside?). 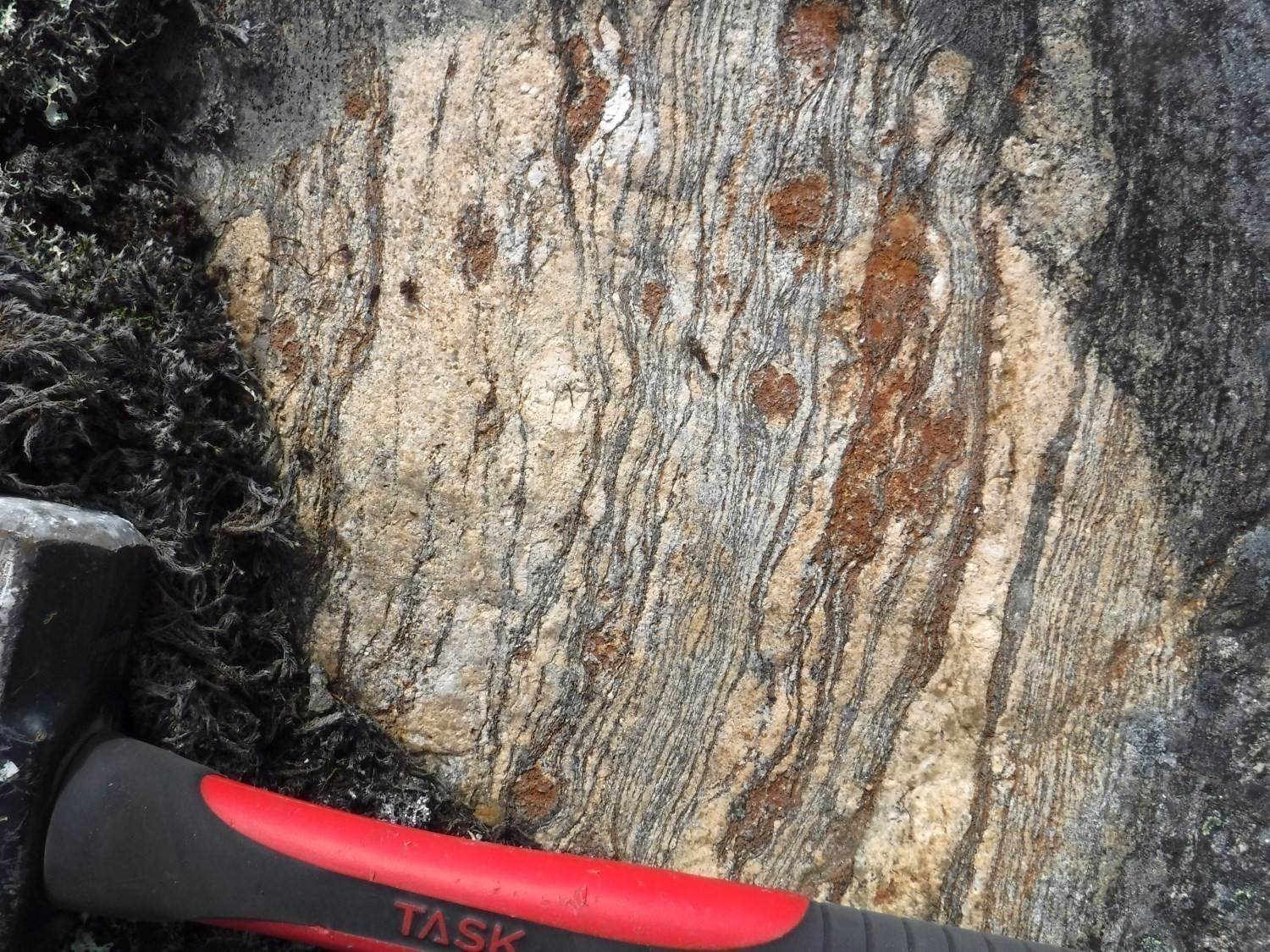 Diatexite is heterogeneous and typically contains 10-30% decimetric to metric partially assimilated enclaves of migmatized paragneiss (rafts) similar to that of unit pPmis1. The alteration patina ranges from light brownish grey to grey. Discontinuous, irregular and locally chaotic banding, characteristic of migmatites, is revealed by the presence of centimetric to decimetric leucosome bands and 10-30% millimetric biotite schlierens (melanosome) associated with garnet and sillimanite in places. Diatexite appears to be gradually changing to leucocratic white anatectic granite similar to that of unit pPmis4. Locally, decimetric to metric white granite injections and clusters cut migmatitic banding of the rock.

Unit pPmis3 diatexite is characterized by a heterogranular texture related to the presence of euhedral to subhedral non-joint plagioclase porphyroblasts (0.5-2 cm). K-feldspar is generally unevenly distributed between bands and rock layers. In some places, diatexite contains 10 to 35% whitish K-feldspar porphyroblasts 0.5 to 4 cm long. In deformation zones, these porphyroblasts are lenticular. Quartz (15-30%) forms large subgrain zones. These define a mosaic texture in places and show clear undulatory extinction. Brown-red biotite contains many zircon inclusions. Small pre-kinematic to syn-kinematic garnet crystals (<5%), locally poikilitic, are common, whereas sillimanite is sparse. Some rocks contain hornblende distributed homogeneously or restricted to certain layers. Accessory minerals are quite abundant, mainly opaque minerals, muscovite, allanite and epidote, accompanied by smaller amounts of sphene, apatite, graphite and carbonate. Chlorite (retrogressive) was observed in association with biotite and garnet in places.

Subunit pPmis3a diatexite is similar to that of unit pPmis3 except that it contains hypersthene. In addition to orthopyroxene, subunit pPmis3a locally contains clinopyroxene. 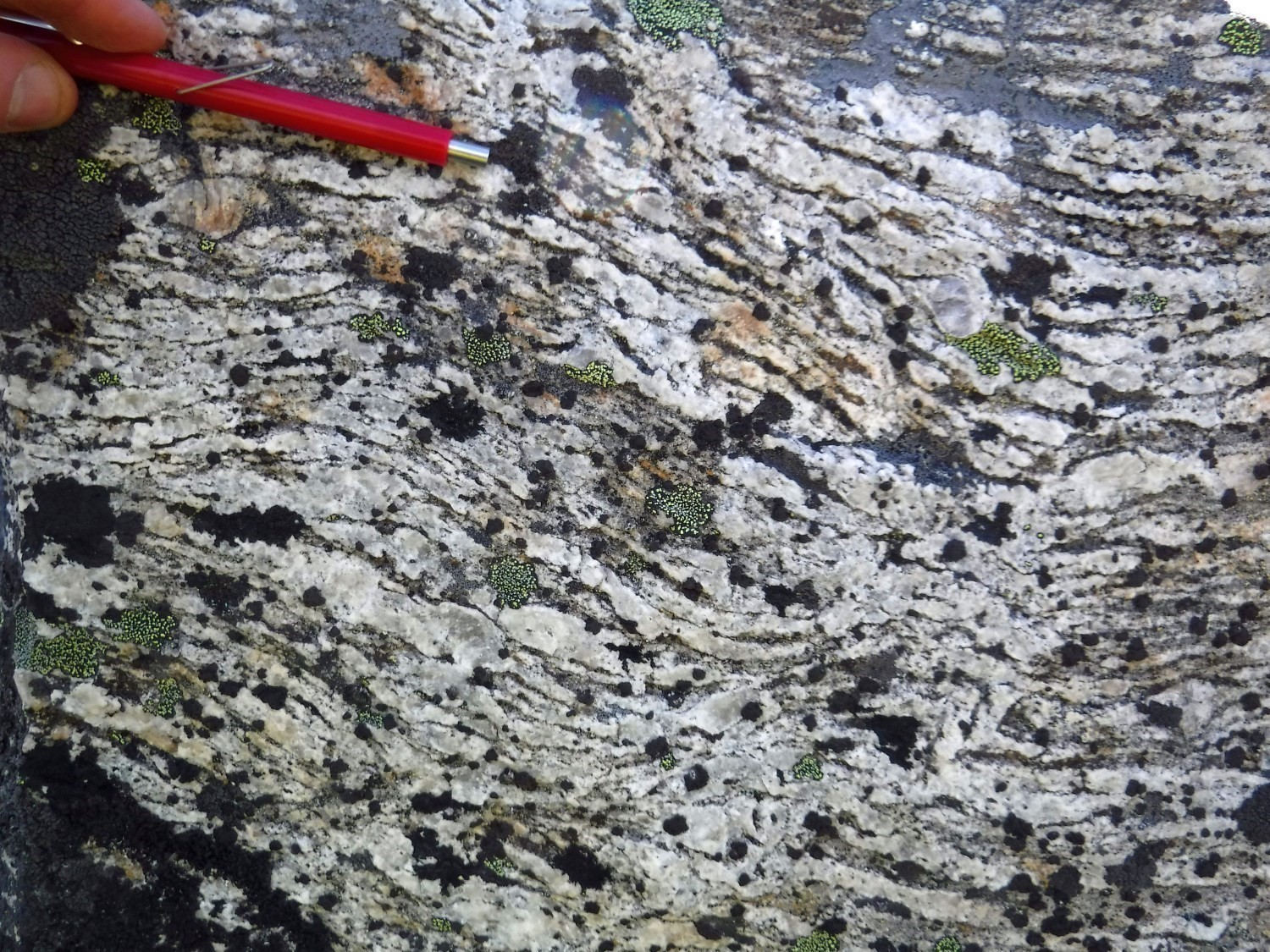 Whitish to beige outcrops of unit pPmis4 appear homogeneous and massive, locally well foliated. Despite this apparent uniformity in outcrops, stains and geochemical analyses indicate that the rock contains 20-35% K-feldspar and that its composition varies from granite to granodiorite. Paragneiss and diatexite enclaves are regularly observed within granitoids. It is most likely that this unit represents anatectic granite derived from partial melting that affected paragneiss and diatexite units that make up the bulk of the Mistinibi Complex. Granitoids show well-preserved magmatic textures, but partial recrystallization at grain edges is visible in thin sections. Muscovite is consistently present (1-10%) and ferromagnesian minerals are sparse (<5%). Garnet and biotite form millimetric schlierens locally. In places, garnet forms porphyroblasts rimmed by retrogressive biotite. Epidote, opaque minerals and sillimanite are also observed in some thin sections.

With a total area of 4190 km2, the Mistinibi Complex is the main unit of the Mistinibi-Raude Lithotectonic Domain. It is limited by the Rivière George Shear Zone to the west and the Moonbase Shear Zone to the north and east. Units pPmis1 (1852 km2), pPmis2 (1129 km2) and pPmis3 (989 km2) cover significant areas, while orthopyroxene subunits pPmis1a and pPmis3a, present only near the Mistastin Batholith (mPmit), are smaller and cover 148 km2 and 15 km2 respectively. Unit mPmis4 white granite (54 km2) forms small kilometric plutons distributed in the Mistinibi Complex. Finally, subunit pPmis2a graphite paragneiss is even more restricted (3 km2).

A petrochronological study conducted by Godet et al. (2018) in two samples of Mistinibi Complex migmatized paragneiss identified the deposition and melting periods of this unit. Detrital zircon analyses show several age populations, mainly between 2350 Ma and 2360 Ma, but also at 2310 Ma and 2400 Ma. The youngest detrital age indicates a maximum age of deposition at 2220 Ma. Ages obtained from zircon, monazite and garnet analyses indicate metamorphism beginning around 2160 Ma with anatectic conditions that have persisted over ~75 Ma (2145-2070 Ma).

The Mistinibi Complex is the main sedimentary unit of the Mistinibi-Raude Lithotectonic Domain. Potassic paragneiss and calcic paragneiss are closely associated, whereas diatexite is the migmatized equivalent of the latter. Unit pPmis4 anatectic granite forms kilometric plutons that intrude sedimentary migmatites of the Mistinibi Complex. Decimetric to metric injections and clusters of whitish granite cut and inject parallel to migmatitic banding in units pPmis1 and pPmis2. Mistinibi Complex migmatites and anatectic granite are affected by regional deformation corridors and are intruded by syntectonic to post-tectonic intrusions of the Dumans Suite (pPdmn). Hypersthene paragneiss and diatexite units (pPmis1a and pPmis3a respectively) are interpreted as the equivalent of hypersthene-free units that have been affected by metamorphism associated with intrusion of the Mistastin Batholith (mPmit).