The Pelland Suite was introduced in the Brisson Lake area (Lafrance et al., 2016) to group mafic, intermediate and felsic intrusive rocks associated with a strong positive aeromagnetic anomaly of regional significance. It was divided into three informal units by Lafrance et al. (2016) and unit 4 was added by Charette et al. (2019) as a result of field checks conducted in the summer of 2016. The first two units (pPped1 and pPped2) are in the extension of units 7 and 8 of Bélanger (1984), whereas unit pPped4 corresponds to the author’s unit 9.

The Pelland Suite consists of four units: 1) granoblastic gabbro and gabbronorite (pPped1); 2) jotunite and opdalite (orthopyroxene monzodiorite and granodiorite; pPped2); 3) charnockite (orthopyroxene granite) and granite (pPped3); and 4) heterogeneous gneissic granite (pPped4). Units pPped1 and pPped2 occur regularly as alternating decimetric to decametric layers and are difficult to distinguish on outcrops because of the dark colour of rocks and the abundance of lichen. Field observations suggest polyphase emplacement of mafic to intermediate magmas subsequently intruded by felsic magmas. Many shear zones affect these different lithologies. 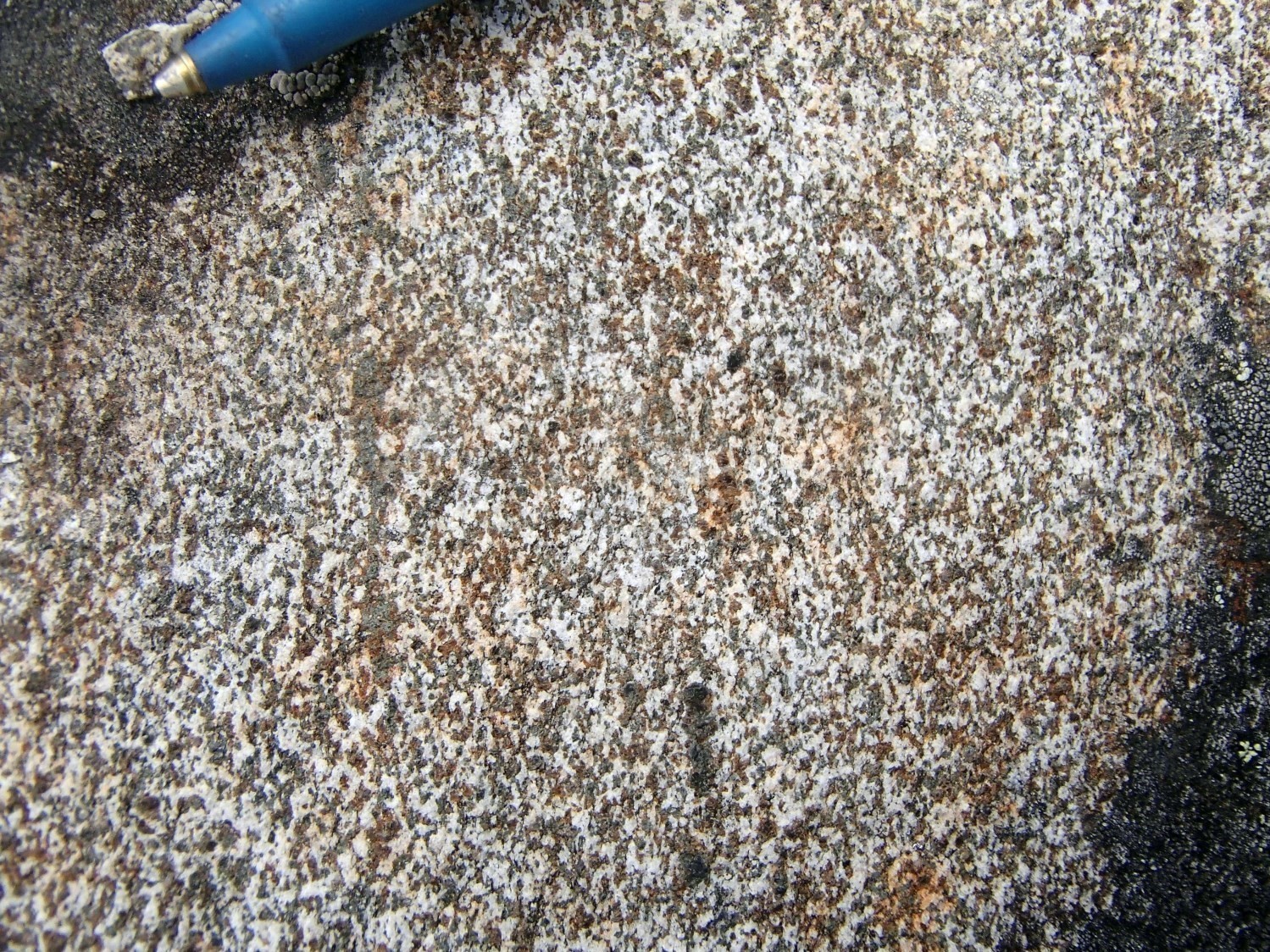 Unit pPped1 forms outcrops of homogeneous appearance, although several intrusive phases are observed. The primary lithology is fine-grained gabbronorite or gabbro, slightly or non-magnetic, dark grey in fresh exposure and brownish beige in altered surface. This rock contains 20 to 40% ferromagnesian minerals, mainly pyroxenes (variably uralitized), <5% biotite as small red flakes, and 2 to 5% disseminated opaque minerals. Clinopyroxene is more abundant than orthopyroxene, which is not consistently present. Quartz (<5%) and apatite are also observed in the majority of thin sections, the first as small anhedral zones or thin bands. In thin section, plagioclase and pyroxene usually exhibit a granoblastic texture, but some coarser, non-recrystallized and antiperthitic plagioclase crystals are also observed. In more deformed zones, lenticular clusters of granoblastic plagioclase give a purplish shade to the rock. 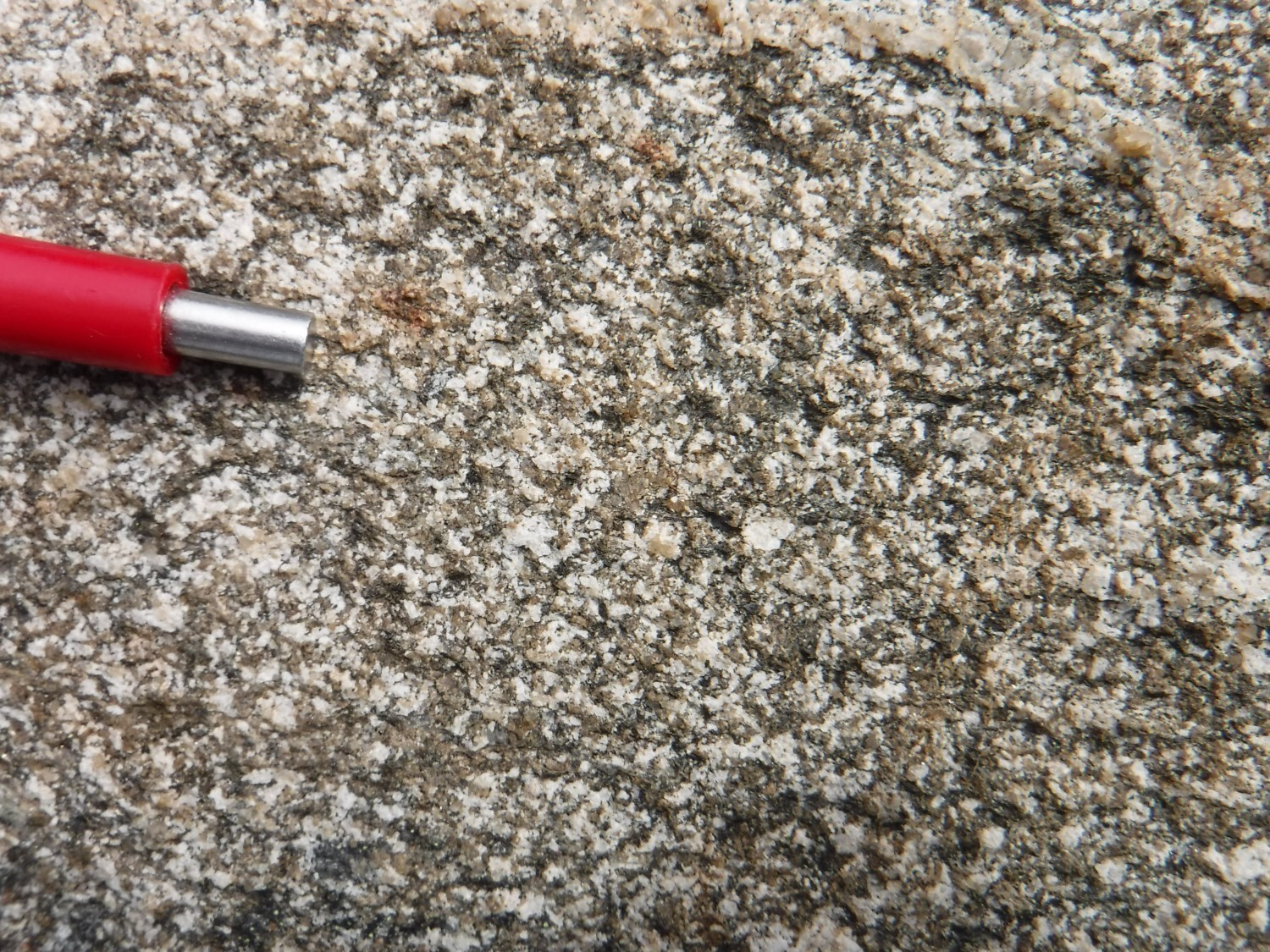 Subunit pPped1a consists of outcrops that, at first sight, appear to be similar to those of unit pPped1 and may not always have been distinguished. In contrast, the microscopic study of thin section, staining and geochemistry revealed the presence of quartz (15-25%) in these rocks. The grain size is also slightly coarser and ferromagnesian minerals are less abundant (15-30%). 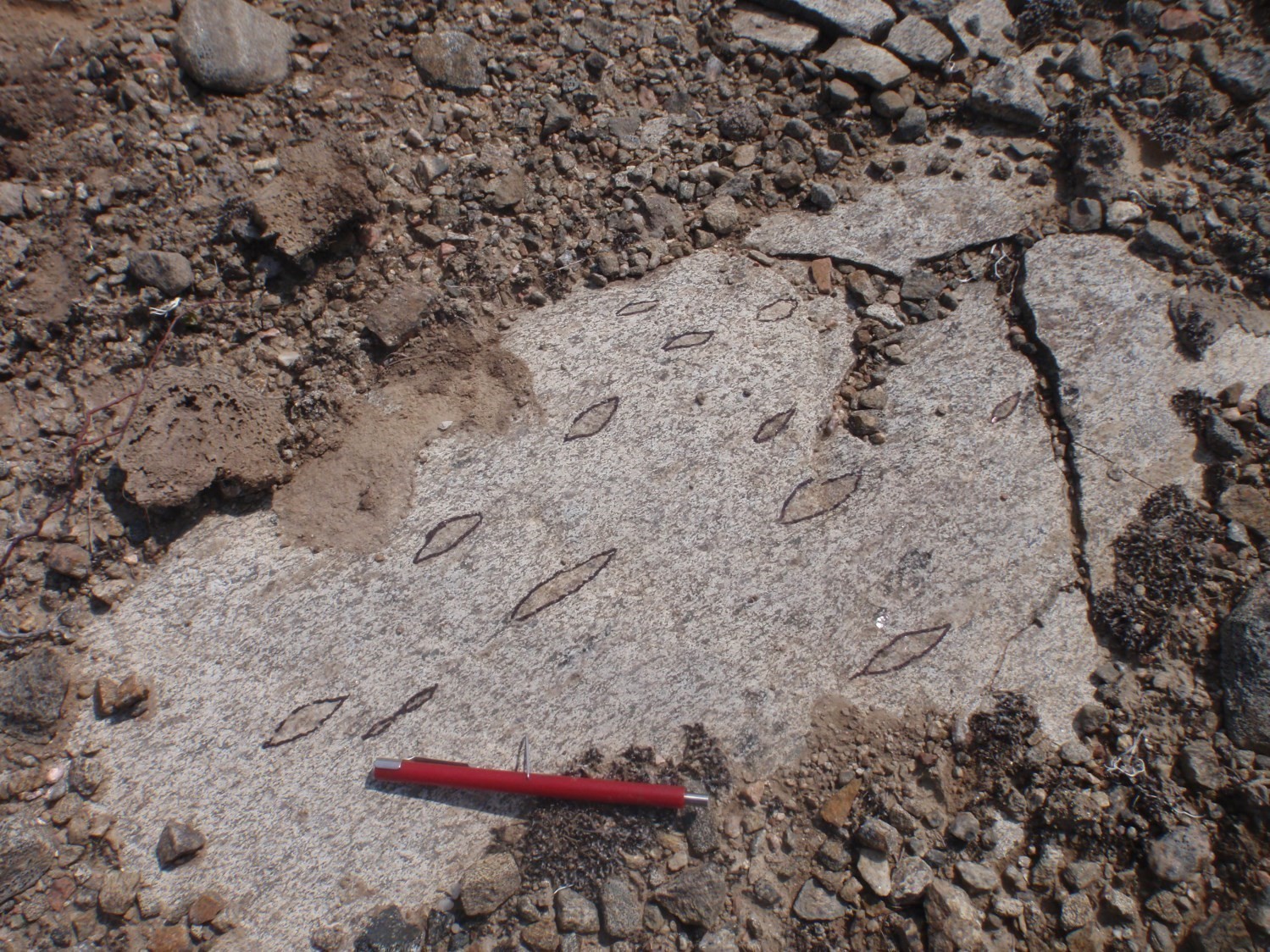 Unit pPed2 is distinguished from unit pPped1 by a lighter colour (brown sugar to brownish grey), slightly coarser grain size, strong magnetism and a greater quartz content (10-20%). In many cases, 5 to 20% pinkish beige K-feldspar phenocrystals 0.5 to 2 cm long are difficult to see on outcrops, but are visible in staining. In shear zones, these phenocrystals are stretched, recrystallized and exhibit deformed twinning. Jotunite and opdalite are well foliated; they display a linear fabric and protomylonitic texture marked by the development of quartz bands and stretching of K-feldspar phenocrystals. Ferromagnesian minerals are the same as those observed in unit pPped1, but less abundant (10-18%). Locally, green hornblende completely replaces pyroxene. The matrix is composed of granoblastic plagioclase and recrystallized smoky quartz exhibiting subgrains and undulatory extinction. Myrmekitic and perthitic textures are generally observed along K-feldspar phenocrystals. The main accessory minerals are garnet, serpentine, zircon, sphene and carbonates. The same intrusions as those described in unit pPped1 are generally observed in jotunite and opdalite. Unit pPped2 also contains enclaves and decimetric layers of unit pPped1 gabbro and gabbronorite. 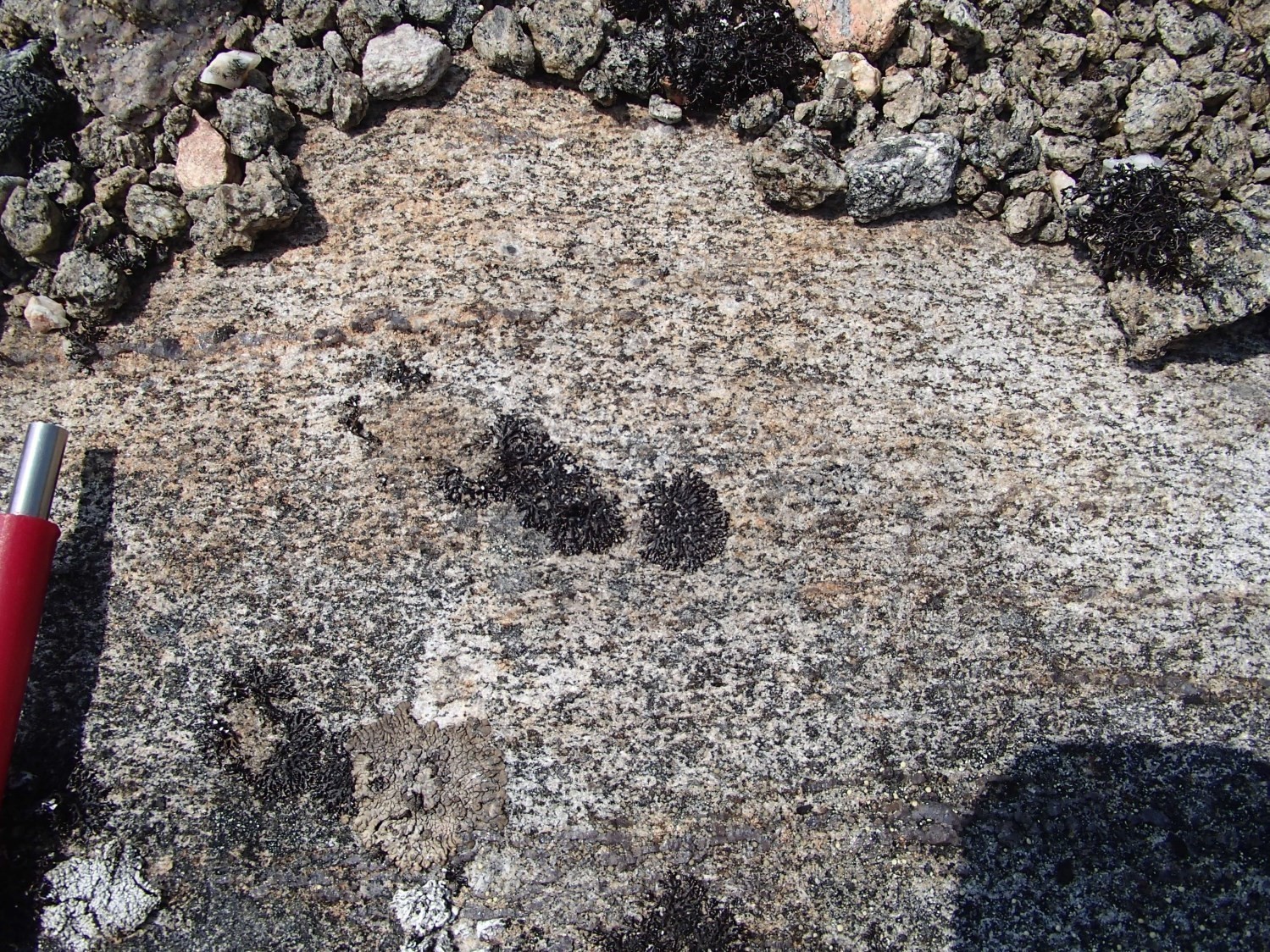 Charnockite and granite of unit pPped3 are medium to fine grained, light brown sugar-coloured or purplish pink, well foliated and contain <8% ferromagnesian minerals. Locally, massive and coarser-grained leucocratic pink granite is also observed. This is a late phase that is not necessarily related to the intrusive suite, but is impossible to map regionally. Ferromagnesian minerals in charnockite and purplish granite are mainly red biotite, magnetite, orthopyroxene and garnet, while late granite contains mainly chlorite, epidote and magnetite. 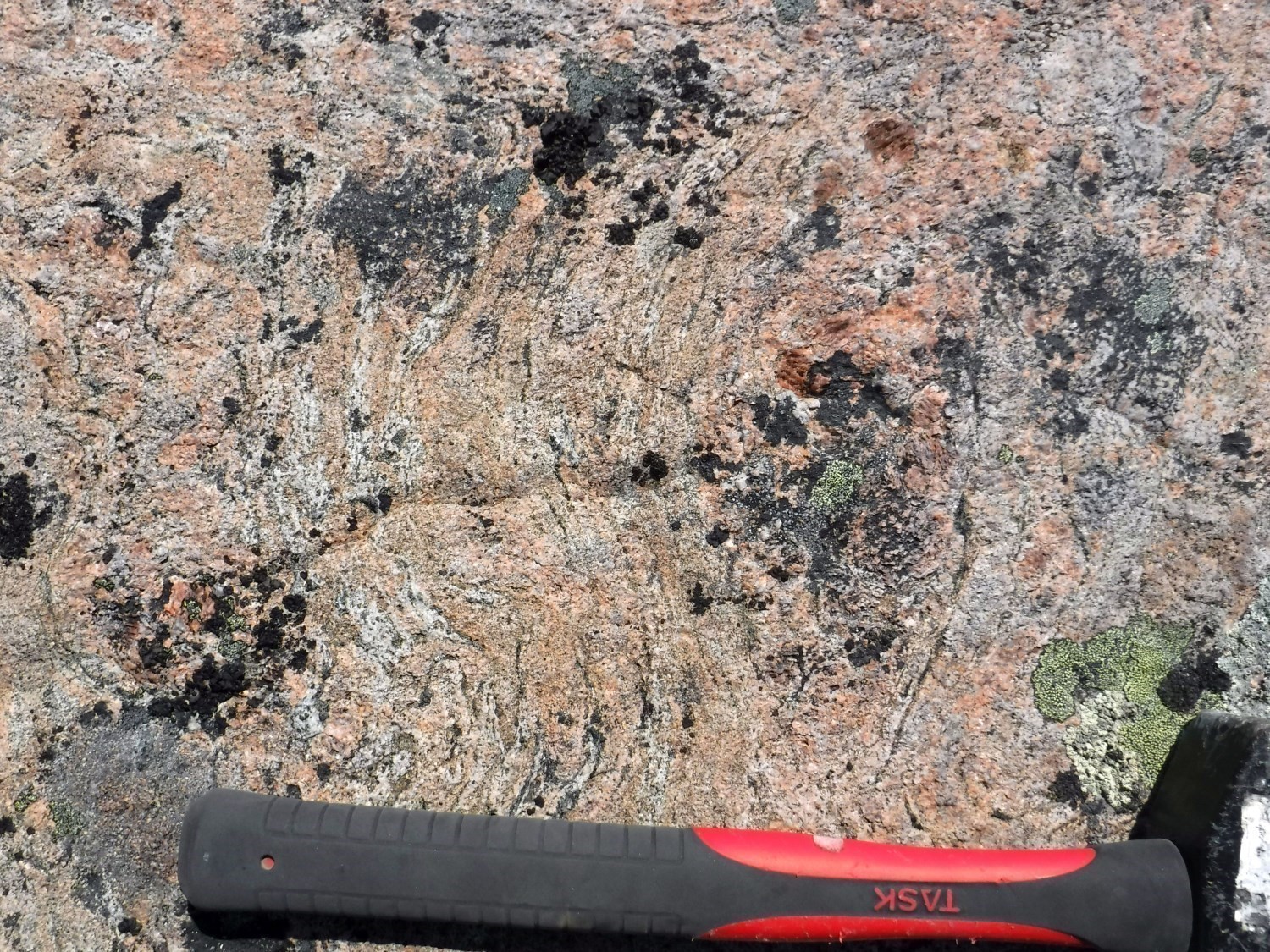 Unit pPped4 is a highly magnetic and heterogeneous gneissic granite which was mainly described by Bélanger (1984). It consists of alternating millimetric to centimetric gneiss and granite bands. Gneiss is composed of biotite ± hornblende, and is dark grey to black with a brownish grey patina. Granite is coarse grained and composed of quartz, K-feldspar and biotite. It is light to pinkish grey and has uraninite traces locally. Unit pPped4 contains enclaves of unit pPped1.

The Pelland Suite is associated with a positive aeromagnetic anomaly that is at least 35 km long by 18 km wide, for a total area of 784 km2 in Quebec. It is located in the NE part of the Mistinibi-Raude Lithotectonic Domain, more precisely at the boundary between sheets 24A and 14D. It extends into Labrador and is cut by a Mesoproterozoic intrusion, the Napeu Kainut Suite, in its south-central section. The Pelland Suite still outcrops south of the Napeu Kainut Suite and then disappears, cut by the Mistastin Batholith. Units pPped1 (416 km2) and pPped2 (157 km2), as well as subunit pPped1a (165 km2), are the most important. Unit pPped3 charnockite and granite (30 km2) form small intrusions on the periphery and inside the Pelland Suite. Unit pPped4 (16 km2) was only observed at the SE end of the Pelland Suite at the edge of the Mistastin Batholith.

Two samples were collected by the Geological Survey of Canada in the summer of 2014 in the Pelland Suite pPped2 unit. An age of ~2320 Ma, considered to be of crystallization, was obtained on a jotunite sample cutting unit pPped1 gabbro and an age of ~2322 Ma was obtained on a porphyroclastic mangerite.

The Pelland Suite is locally in sharp contact with the Mistinibi Complex. Given the respective ages of these units, this contact is tectonic in origin. The Pelland Suite is cut by Mesoproterozoic intrusions of the Napeu Kainut Suite and Mistastin Batholith. Unit pPped3 charnockite locally contains decimetric to metric enclaves of biotite-garnet paragneiss similar to those of the Mistinibi Complex, suggesting that unit pPped3 would be in part considerably younger than unit pPped2, dated ~2322 Ma.