This unit was mapped by Taylor (1979) who originally named it “Mistastin Lake Pluton”, referring to Mistastin Lake located in Labrador in sheet 13M14. The term “Mistastin Batholith” was introduced by Emslie et al. (1980) who recognized four main lithologies in the batholith: 1) anorthositic clusters in the NE part of the batholith; 2) pyroxene-hornblende quartz monzonite in its north-central part (40% of the batholith); 3) biotite-hornblende granite in the southern, western and eastern parts (50% of the batholith); and 4) pyroxene monzonite. This latest lithology now corresponds to the Misery Syenite (mPmsy).

A regional compilation by geologists of the Ministère in 2003 subdivided the Mistastin Batholith into six informal units (mPmit 1 to mPmit6) from the work of Bélanger (1984), Owen (1989), Danis (1991), Taner (1992) and van der Leeden (1995). In addition, in the Zéni Lake area, Hammouche et al. (2012) defined a new heterogeneous granite unit characterized by a strong magnetic signature (mPmit7). Field work and compilation by Lafrance et al. (2018) as part of the regional synthesis of the entire Southeastern Churchill Province helped to standardize the nomenclature for this unit. The newly redefined Mistastin Batholith is now subdivided into five informal units (mPmit1 to mPmit5). 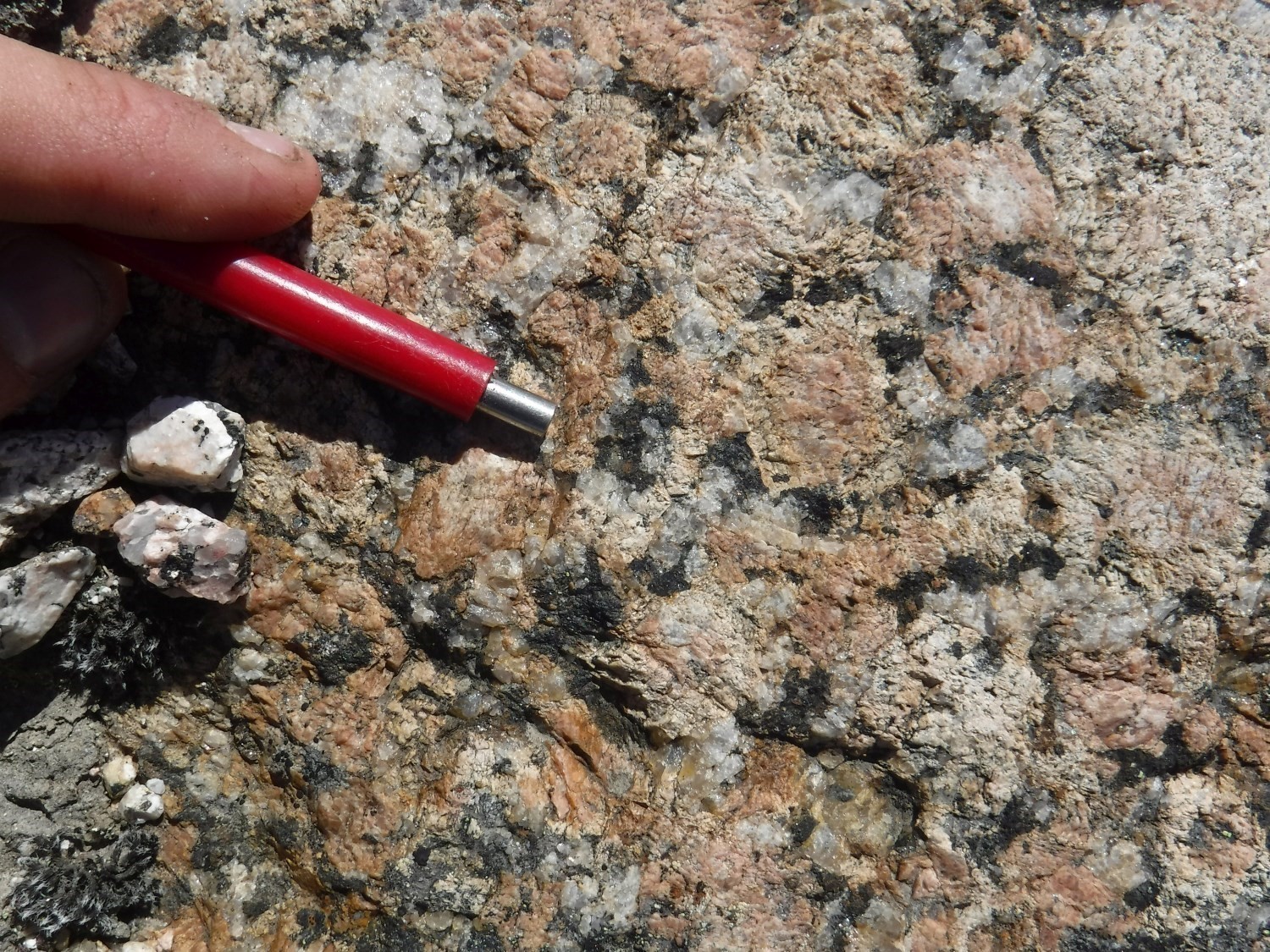 Unit mPmit1 is similar to unit mPmit2 by its general appearance and composition. It is distinguished by the presence of pyroxene. The presence of >60% centimetric K-feldspar phenocrystals, which have a rapakivi structure in places, is characteristic of this unit. The rock is usually affected by weathering, giving it a brownish cream or brownish pink colour in altered patina. Alteration is generally so pronounced that the rock breaks down over several metres thick.

The rock composition varies from quartz syenite to syenogranite. Massive, homogeneous and medium-grained hypersthene ± clinopyroxene quartz diorite is observed locally at the edge of the batholith. K-feldspar phenocrystals (1-10 cm; 3-5 cm on average) of unit mPmit1 are ovoid, subrounded or euhedral. They are in a medium-grained matrix of feldspar, quartz, hornblende, biotite and hypersthene. These phenocrystals consist of perthitic orthose or microcline. The rapakivi structure is well exposed on altered surface where pinkish K-feldspar crystals are surrounded by whitish plagioclase forming a subhedral to anhedral rim 2 mm to 10 mm thick. Double rims (K-feldspar core surrounded by plagioclase rim, followed by K-feldspar rim bordered by a second plagioclase rim) were locally reported by van der Leeden (1995). Inclusions of hornblende, biotite and plagioclase in small laths are present in K-feldspar phenocrystals and are locally distributed to define concentric zoning. In places, plagioclase also forms phenocrystals. 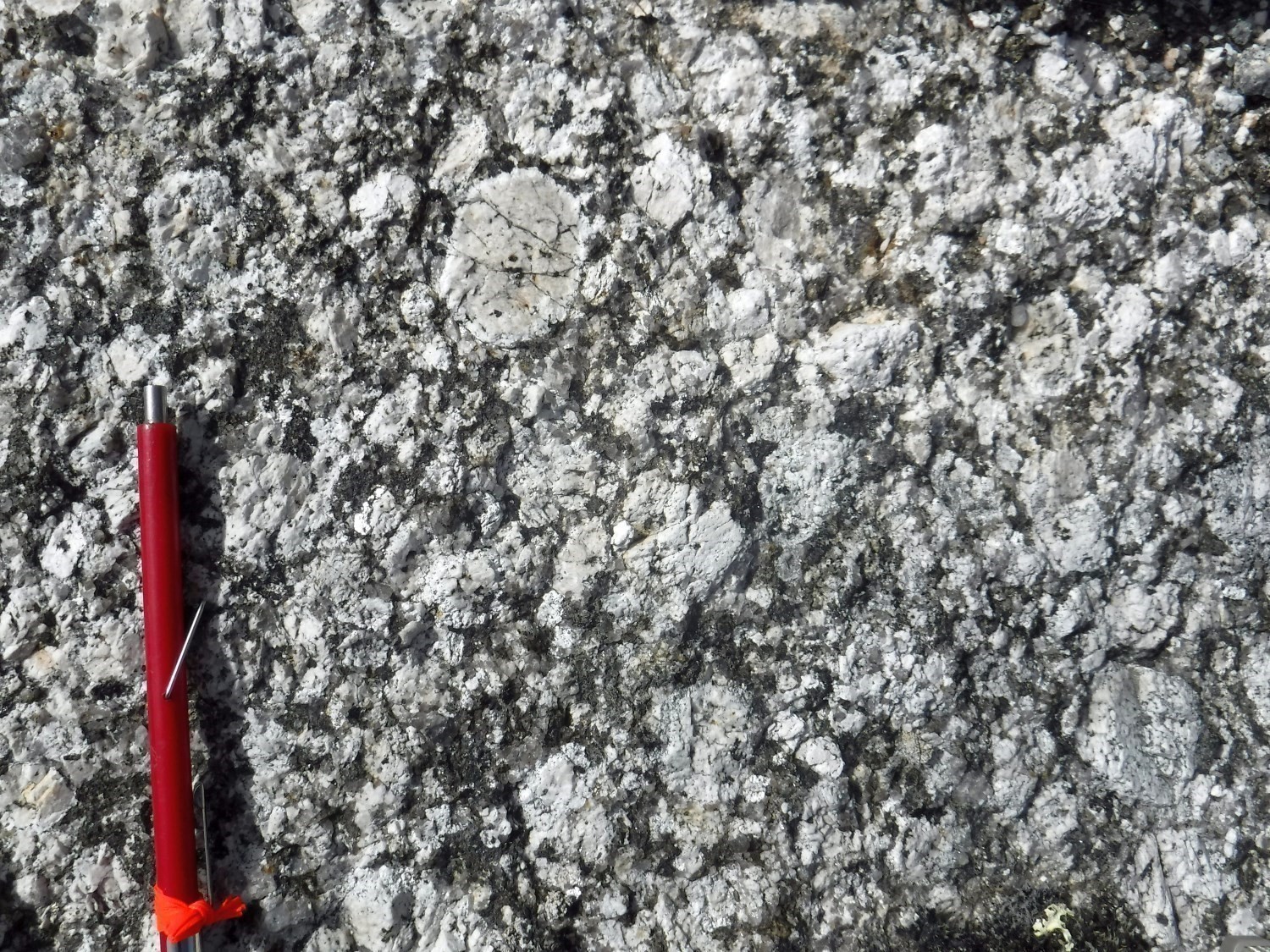 Unit mPmit2 differs from unit mPmit1 primarily due to the absence of pyroxene. Like unit mPmit1, the rock is highly affected by weathering and its composition varies from quartz syenite to syenogranite. The rock’s structure and mineralogy are very similar to the previous description (except for the absence of hypersthene and clinopyroxene). The presence of grunerite is noted by van der Leeden (1995), which is claimed to indicate amphibolite facies’ low pressure conditions.

K-feldspar phenocrystals exhibiting a rapakivi structure are observed almost everywhere in outcrops, but their distribution is uneven and, in general, only a few phenocrystals of this type are present. Hammouche et al. (2012) report that in several locations, including the periphery of unit mPmit3a, the rock resembles a cumulate. The authors also indicate that in the Zeni Lake area, the rapakivi structure is poorly developed. In this area, zones of significant size where this texture is uniformly well developed have been grouped in subunit mPmit2a. 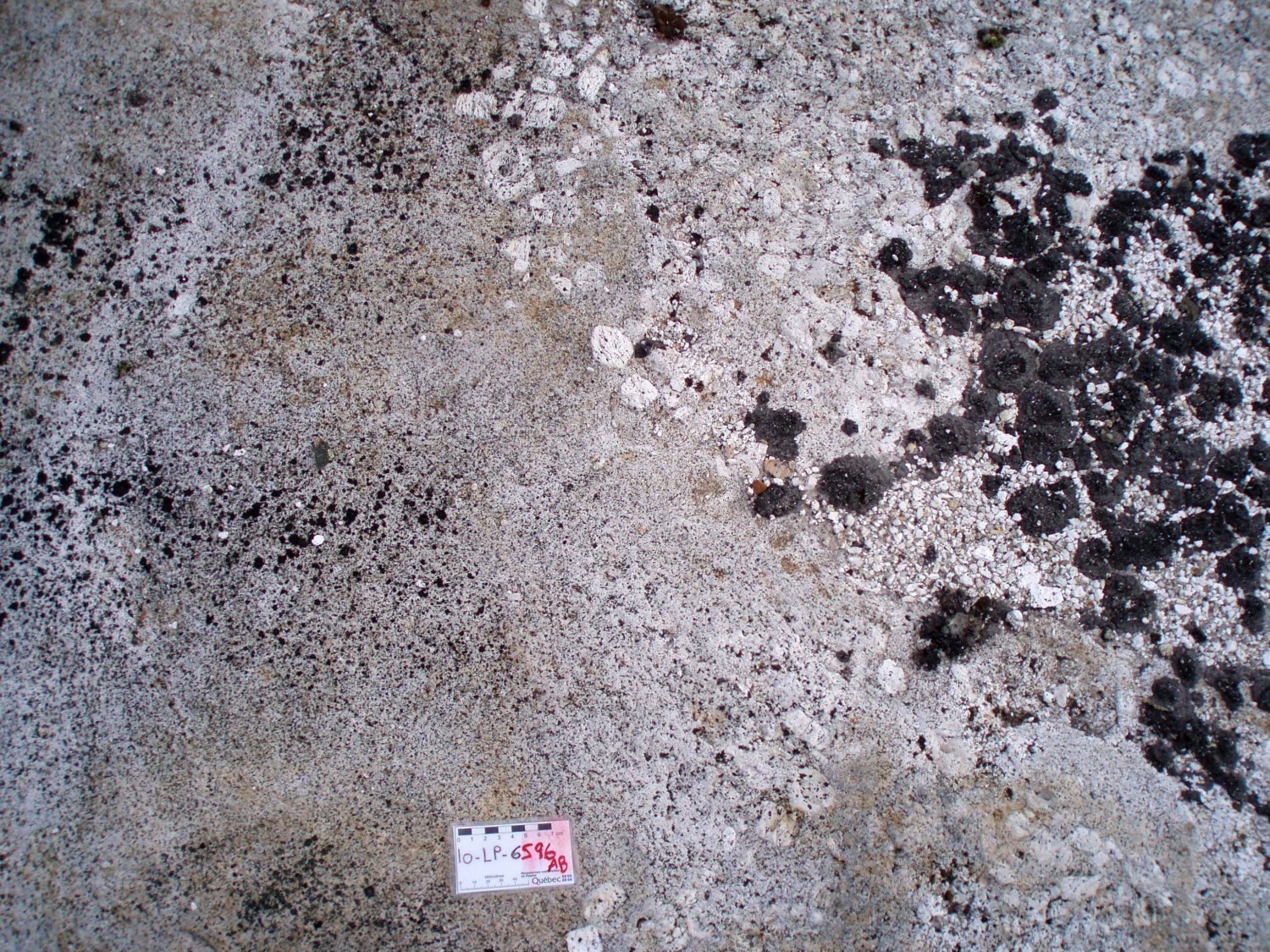 Unit mPmit3 consists of quartz monzonite and quartz syenite characterized by finer grain size (medium to fine-grained) than that of unit mPmit2. These pinkish beige lithologies with a brownish beige alteration patina are generally observed in association with syenite and syenogranite of the Mistastin Batholith main phase (mPmit2). Plagioclase and K-feldspar form 0.5-1.5 cm crystals in a finer-grained quartzofeldspathic matrix. Ferromagnesian minerals (hornblende and biotite) are concentrated in 1-2 cm clusters, giving a speckled appearance to the rock. These minerals contain several small quartz and feldspar inclusions. Accessory phases are opaque minerals, epidote, allanite and apatite. Secondary alteration is expressed by biotite chloritization, the presence of hematite in the matrix and slight sericitization of plagioclase crystals. 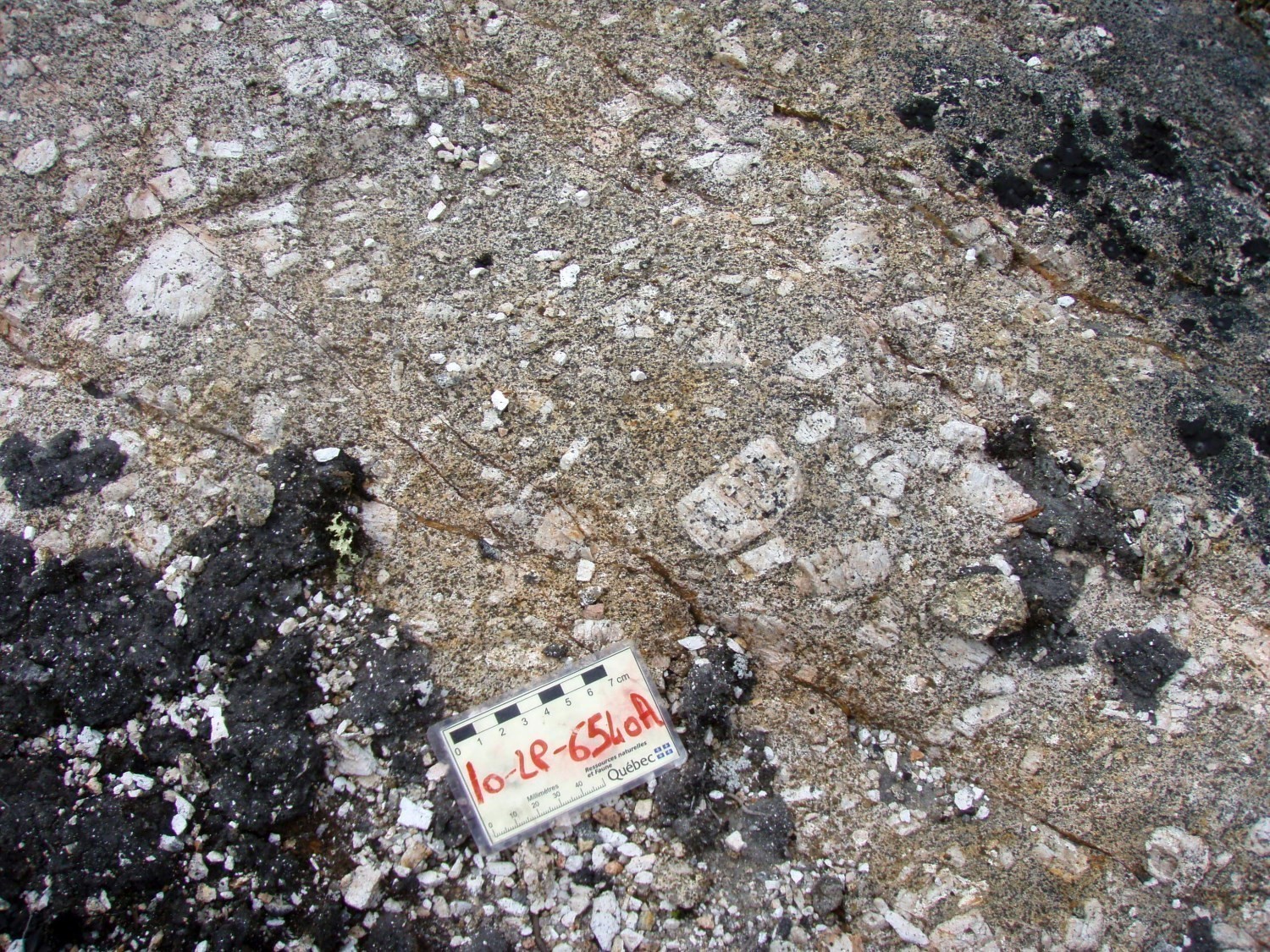 In the Zeni Lake area, subunit mPmit3a has a more pronounced magnetic signature and includes several biotite-hornblende granite phase. These were defined by Hammouche et al. in 2012 (formerly mPmit7) and include an even-grained phase, a centimetric rectangular K-feldspar cumulus crystal phase, and a second one containing K-feldspar phenocrystals in a medium-grained matrix. Granite is pinkish beige to red and is medium to coarse grained. It contains 10-25% biotite and hornblende. Accessory minerals are magnetite, allanite, zircon, apatite and fluorite. This granite is in gradual contact with metric layers of medium-grained monzonite, quartz monzonite and syenite. These layers are greenish and have a brown alteration patina. They commonly contain K-feldspar phenocrystals and are richer in ferromagnesian minerals (30%), including biotite, hornblende, fayalite, clinopyroxene and magnetite. These layers correspond to mafic rocks of unit F4e of Taner (1992). This subunit also contains irregular, centimetric to decimetric clusters of amazonite pegmatitic granite. 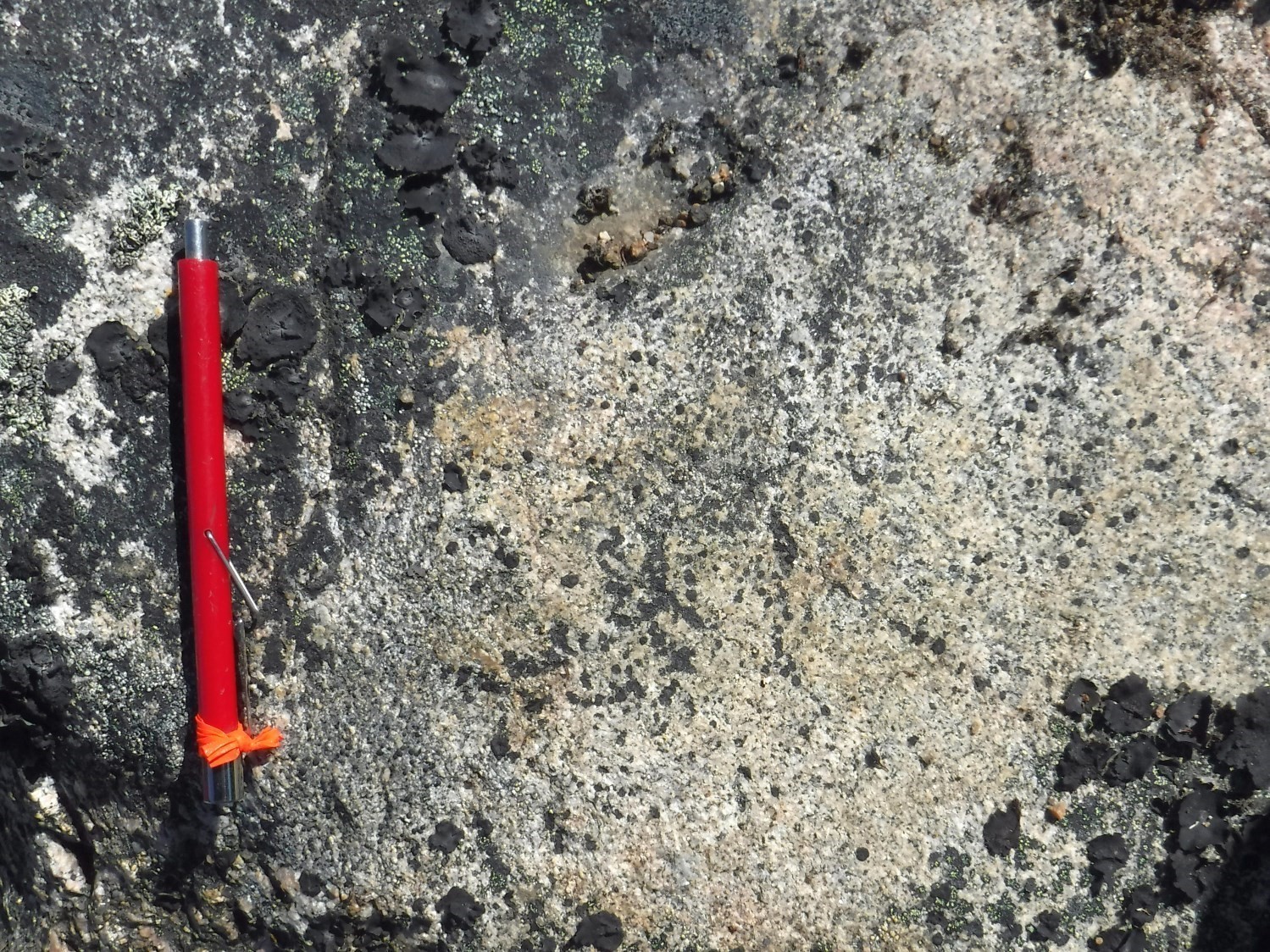 Unit mPmit4 consists of leucocratic granite and pink syenogranite. These biotite rocks were only observed by Owen (1989), Taner (1992) and van der Leeden (1995). This unit has no rapakivi structure and contains small amounts of ferromagnesian minerals (2-5%). As with units mPmit1 and mPmit2, severe weathering results in mechanical breakdown of the rock.

Leucogabbronorite and leucogabbro surround anorthosite and have been included in subunit mPmit5a. The latter forms an irregularly thick rim (<500 m) in diffuse contact around the anorthositic core.

With an area of 2525 km2 in Quebec, the Mistastin Batholith is the largest granitic massif of the Mistinibi-Raude Lithotectonic Domain and one of the main lithodemic units. It is located at the eastern end of the domain, at the boundary between Quebec and Labrador. The Mistastin batholith forms a large, N-S-oriented mass that is continuous over 100 km. The physiography of the batholith is characterized by a high-relief plateau with very little vegetation. The two main units of the Mistastin Batholith are, in order of importance, mPmit2 (1834 km2) and mPmit1 (573 km2). Unit mPmit3 (14 km2) is located within unit mPmit2 unit and forms a single kilometric mappable zone in the northern portion of the batholith (sheet 14D04). Subunit mPmit3a (32 km2) is exclusively observed in the Zeni Lake area (sheet 13M04). Granite and syenogranite (mPmit4) represent a small area (4 km2) within the batholith. Anrthosite and associated mafic rocks (mPmit5 and mPmit5a) are restricted to a mass of ~1 km2 at the NE end of the Mistastin Batholith (sheet 13M14).

Preliminary U-Pb zircon dating gave an age around 1440 Ma (R.F. Emslie, personal communication, quoted in van der Leeden, 1990). Intrusion of the Mistastin Batholith was specified in Ladrador between 1420 Ma and 1440 Ma. The youngest age was obtained in a granite sampled in the Ytterby 2 showing area, while the oldest was obtained in a syenogranite sample collected near the Ytterby 3 showing in Labrador.

The batholith contains enclaves of gneiss, metamafic rocks and anorthosite (van der Leeden, 1995). Relationships between the main units of the Mistastin Bothalith (mPmit1 and mPmit2) are difficult to observe in outcrops given their similar appearance. Medium-grained monzonite and quartz syenite of unit mPmit3 form decimetric to kilometric clusters in the main phase of the Mistastin Batholith (mPmit2). The gradual or diffuse contact between these two units could indicate a process of segregation of comagmatic phases. Bélanger (1984) reports that mPmit3 rocks also occur as intrusions that cut unit mPmit2. In addition, sills associated with unit mPmit 4 cut units mPmit1 and mPmit2 (van der Leeden, 1995). Anrthosite and associated mafic rocks (mPmit5) are intruded by biotite pegmatite, leucogranite and quartz monzonite that may be derived from the Mistastin Batholith (van der Leeden, 1995).