This unit is named after Ntshuku Ministuku Lake located in sheet 24A02.

The Ntshuku Complex consists of three units: 1) metavolcaniclastics, schist and augen gneiss, and quartz-feldspar porphyry, 2) amphibolite, and 3) marble and calcosilicate rocks. These three units are interstratified between each other on a scale ranging from centimetres to kilometres. Deformation within these units is variable; transition between foliated and mylonitic lithologies occurs gradually over a few decimetres to several metres. Description of units is largely taken from van der Leeden (1994) and Girard (1990a, b).

Unit pPnts1 corresponds to units C2a and C2b of van der Leeden (1994, 1995) and C-2 of Girard (1990a). The degree of deformation is usually very high, but there are centimetric to hectometric undeformed klippes where primary structures can still be discerned (Girard, 1990a). Regular and rhythmic bedding when not deformed becomes contorted and corrugated with increased deformation. In addition, deformation results in decreased crystal size and abundance, leaving room for mylonitic recrystallization in the form of veinlets. This unit is also characterized by alternating metric to decametric metavolcaniclastic and amphibolite layers. Meta-arkoses and a few chert beds are reported locally (Girard, 1990a). 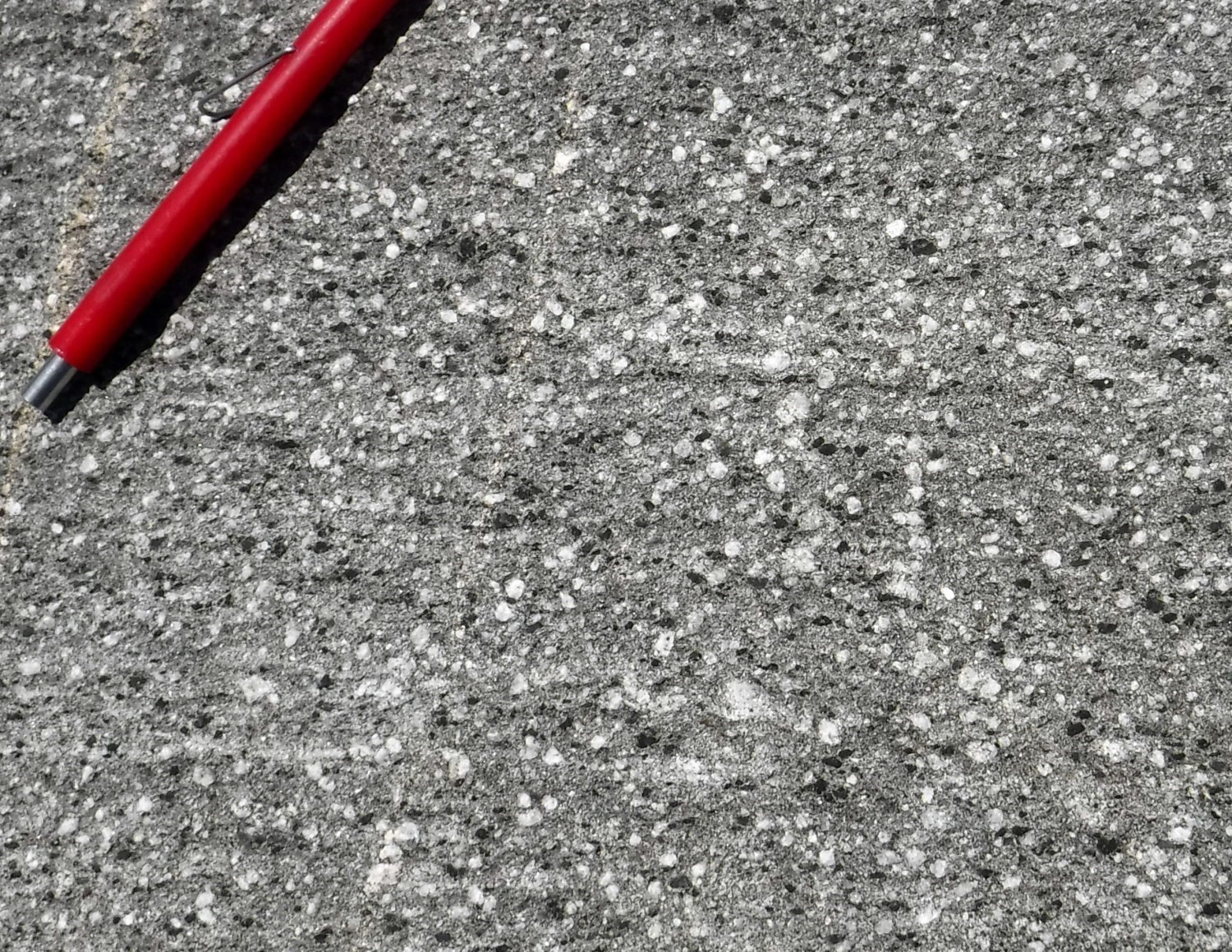 Metavolcaniclastics are characterized by the presence of 5 to 60% eyes (crystals) or 1 to 40 mm white lithic fragments (lapillis) in a very fine to medium-grained greyish or cream-coloured matrix. Fragments larger than 64 mm are sparse. Rounded to subangular crystals are commonly deformed and stretched. Edges are commonly corroded and cut by metamorphic minerals of the matrix. They are mainly composed of plagioclase (andesine) associated with lower amounts of orthose, microcline and quartz. Centimetric bedding in metatuffs is marked by changes in crystal size and content. Lithic fragments are composed, in order of importance, of the perthitic orthose-plagioclase and plagioclase-quartz assemblages. There are also some fragments of dioritic composition. Since the matrix is fine grained, van der Leeden (1994) did not consider fragments to be of metamorphic origin. The protolith could be lapilli tuff, tuffaceous sandstone or polymictic pebble conglomeratic sandstone. The majority of metavolcaniclastics are dacitic, locally rhyodacitic or andesitic. They contain 4 to 25% ferromagnesian minerals, mainly brown or green biotite, and locally hornblende and garnet. Biotite defines foliation and is concentrated in laminae or in certain bands or beds. Secondary foliation, oriented 30° to 45° of the main foliation, and banding are usually observed. Hornblende locally forms small poikiloblasts stretched in foliation. Accessory minerals are abundant and include zoisite, muscovite, chlorite, allanite, sphene, opaque minerals and zircon. They usually form millimetric crystals concentrated in laminae. Plagioclase is commonly sericitized.

In places, metavolcaniclastics do not contain crystals. They are essentially quartzofeldspathic, hololeucocratic and light cream grey. Girard (1990a) also mentions the presence of phyllitic and graphitic beds in gradual contact with crystal metatuffs over a few decimetres. These phyllitic beds are friable, grey, brown or pinkish in fresh exposure. A rusty alteration patina is common. The rock consists of millimetric quartzitic or quartzofeldspathic microlithons alternating with phyllosilicate microlithons. The phyllitic fraction is mainly composed of muscovite-biotite associated with chlorite in minor amounts. Epidote and garnet are occasional. White mica alteration is commonly superimposed on this assemblage. Deformation is marked by banding recrystallization, a very well-developed schistosity and the presence of several generations of cleavages and crenulations. The protolith is thought to be primarily a volcaniclastic rock rich in ash and pelitic material. Graphitic beds are an extremely friable facies of mealy white rock having a rusty patina. They were observed near mineralized zones at the interface between amphibolites and crystal metatuffs. These rocks are composed of quartz bands, saussuritized residual feldspar, and micas (sericite, muscovite and fuschite).

Schists and augen gneiss are of pelitic or semi-pelitic composition. These fine-grained rocks are grey or light brown. Feldspar, quartz and lithic fragment eyes are 1 mm to 15 mm long, most forming diamonds 1 mm to 3 mm long. Van der Leeden (1994) interpreted a volcanic or detritic origin for these fragments based on the following arguments: 1) schists and gneiss are locally interstratified with metabasalt; and 2) eyes do not have the characteristics of metamorphic remobilization or boudinage. Beds are generally thin and laminations are locally observed. To the north of Ntshuku Ministuku Lake, a muscovite schist bed ~3 m thick contains numerous felsic lithic blocks reaching 15 cm long. 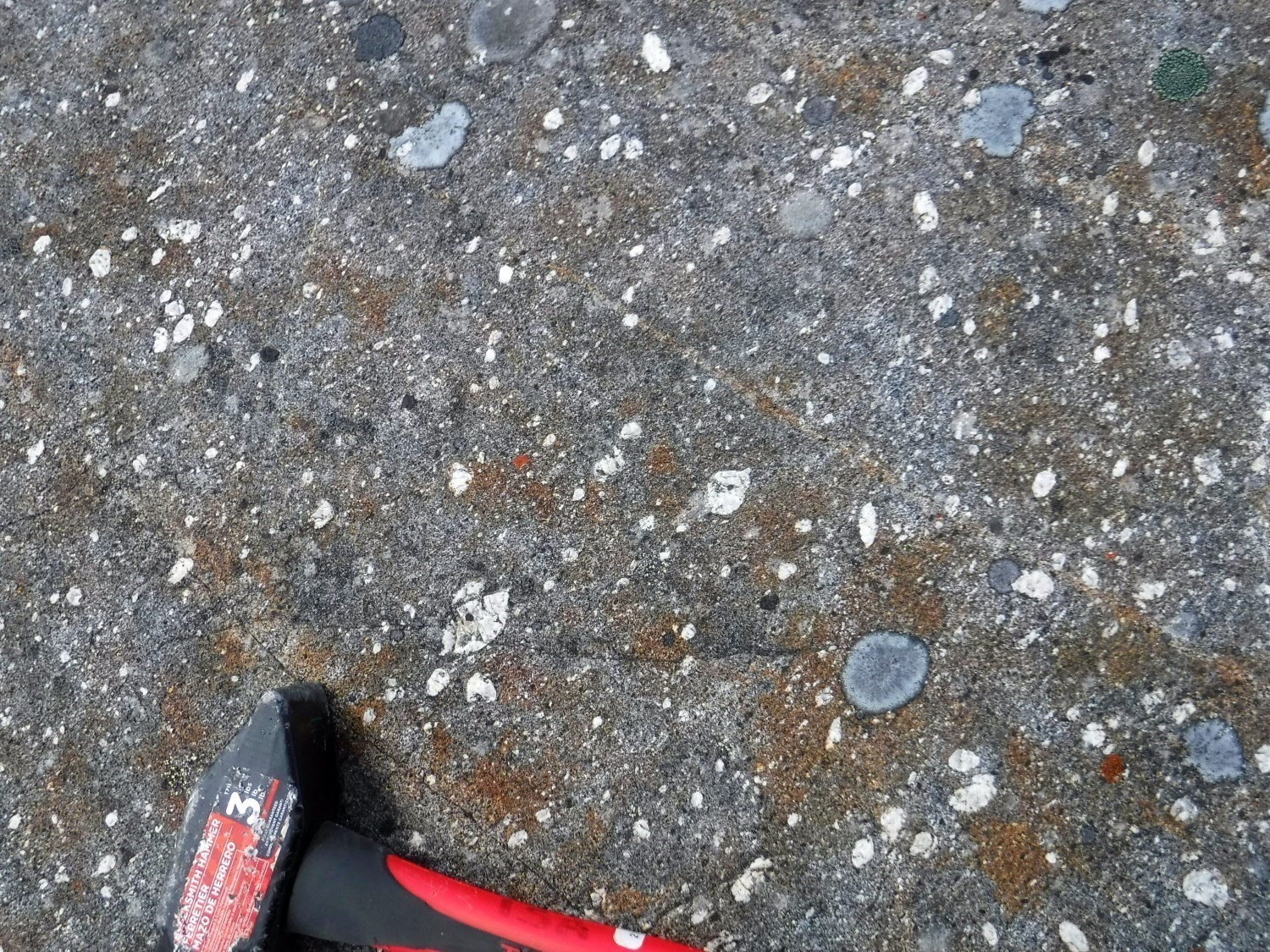 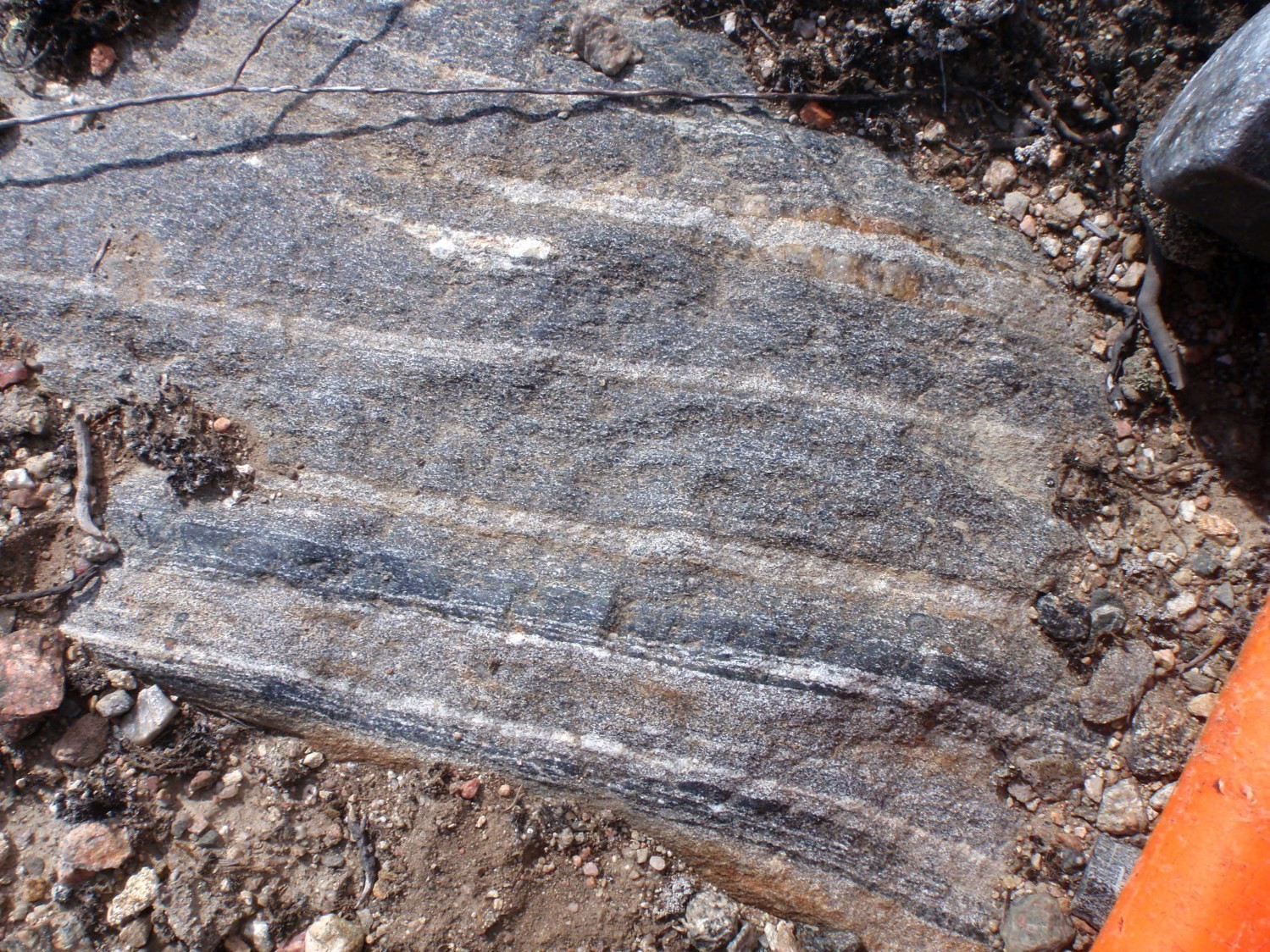 Unit pPnts2 corresponds to units C1a and B1 of van der Leeden (1994, 1995) and C-1 of Girard (1990a). Amphibolite is foliated, even grained and very fine to medium grained. It is dark grey to black in altered surface and dark greenish grey in fresh exposure. It is usually massive or banded, but locally shows ellipsoidal pillow-like shapes. A laminated facies (mafic tuff) and flow breccias were observed in places (Girard, 1990a). Amphibolites also form decametric layers of breccias containing centimetric to metric fragments, angular to oblong, within volcaniclastics. A few breccias are autoclastic and overprinted by deformation, but the majority are tectonic in origin and associated with shear zones. Amphibolite contains 60-85% amphibole. Plagioclase is variously saussuritized.

Various mineralogical assemblages have been described by Girard (1990a): 1) green hornblende-andesine; 2) calcic plagioclase (bytownite-anorthite)-phlogopite-tremolite-garnet-sphene; and 3) uralite-andesine.

The first assemblage is the most common. These amphibolites also contain local anthophyllite, pistachite, tremolite, allanite, garnet, tremolite, chlorite, calcite and quartz. Accessory minerals are apatite, sphene, zircon and opaque minerals (pyrrhotite, chalcopyrite and magnetite). Milllimetric nodules composed of anthophyllite-tremolite-quartz and hornblende glomero-porphyroblasts of similar habitus replace augite in a pseudomorphic manner. Various primary volcanic textures are recognizable. There are some layers of autoclastic or hyaloclastic breccias containing decimetric angular fragments of amphibolite floating in a garnet quartzofeldspathic, amphibolitic or carbonate matrix. These breccias are located at the amphibolite-volcaniclastics interface or within amphibolite massifs. The angularity of fragments and the lack of evidence of ductile deformation suggest synvolcanic rather than tectonic fragmentation.

The second mineralogical assemblage is observed in foliated, laminated mesocratic amphibolite. This even-grained and fine-grained rock is grey in fresh exposure and rusty in altered surface. It occurs as metric layers in the first type of amphibolite. In addition to minerals characteristic of the assemblage, it contains small amounts of biotite, hornblende, rutile, pyrrhotite and zircon. The texture is granoblastic to lepidoblastic.

The third assemblage is sparse. Massive amphibolite is even grained, fine grained and green. Hornblende is light green, occurs as polycrystalline zones and has irregular and intergrown edges. Accessory minerals are pyrite, pyrrhotite, epidote, apatite and sphene.

The age of ~2374 Ma obtained from sample 2016-RG-5007A is interpreted as volcanism (Davis and Sutcliffe, 2018). Overgrowth at 2318 Ma, characterized by Th/U ratios typical of magmatic zircons, could indicate that the rock has undergone some degree of partial melting or that the primary magma is the result of remobilization of an older rock. Dating of a sample from a porphyritic monzodiorite layer considered by Corrigan et al. (2018) to be equivalent to the Pallatin Intrusive Suite (pPpal3) confirms the crystallization and metamorphic ages of the Ntshuku Complex. Charette et al. (2019) chose, however, to assign these thin porphyritic layers that have a fine matrix and are interstratified in volcanic sequences, to the Ntshuku Complex.

The Ntshuku Complex is in fault contact with the Advance Complex to the west and Mistinibi Complex to the east. Despite intense deformation, Girard (1990a and 1990b) did not recognize any significant duplication, inversion or breakage of the stratigraphy within the Ntshuku Complex. It also proposes a draft stratigraphic column indicating a total pre-tectonic thickness between 4 km and 9 km. Volcaniclastic rocks are interpreted as pyroclastic in origin due to the regularity of bedding, fine grain size, absence of lithic fragments, and vesiculation in effusive layers. Emplacement of these pyroclastics involves hyaloclastic fragmentation of magma without explosive degasification and deposition of ash and lapilli in the context of debris flow. This sequence would have been built in a deep marine environment, with volcanic structures involving a minimum of a few hundred metres of water depth.

The insertion of 2 to 10 m-thick sills and tabular massifs of the Pallatin Intrusive Suite (pPpal) in Ntshuku Complex units, the locally gradual contact between these two lithologies, and the control of intrusions’ geometry by host rocks suggest hypabyssal emplacement of Pallatin subvolcanic rocks in the Ntshuku. Given the deformation observed within the two units, alternation between these units could also be of tectonic origin (van der Leeden, 1995).