The Pallatin Intrusive Suite was formally defined by van der Leeden (1994) in the Hutte Sauvage Lake area. However, this term had been used informally in the Leif Lake (Owen, 1989), Déat River (Girard, 1990) and Raude Lake (Danis, 1991) areas. This suite was also described farther south in the Mistinibi Lake area (van der Leeden, 1995). The Pallatin Intrusive Suite corresponds to informal unit F3 for all of these authors, except for Girard (1990a) who added the Pallatin Intrusive Suite to Group E. Unit F3a (porphyraceous granitoids) of van der Leeden (1994, 1995) included intrusions in the Pallatin Lake area and other N-S oriented elongated forms in the George River area. Based on their location and composition, these were reassigned to the De Pas Granitic Suite by Charette et al. (2019) as part of the Southeastern Churchill Province (SECP) regional synthesis (Lafrance et al., 2018).

The Pallatin Intrusive Suite consists of three units: 1) metawebsterite (pPpal1); 2) metagabbronorite and metagabbro; and, 3) porphyraceous quartz monzodiorite and granodiorite. These units are generally not magnetic. Van der Leeden (1994) mentions a gradual transition between units pPpal1 and pPpal2. These two units are massive to foliated, locally more deformed in shear zones. They are cut by millimetric to centimetric quartzofeldspathic veinlets. The contact is sharp or gradual between units pPpal2 and pPpal3. 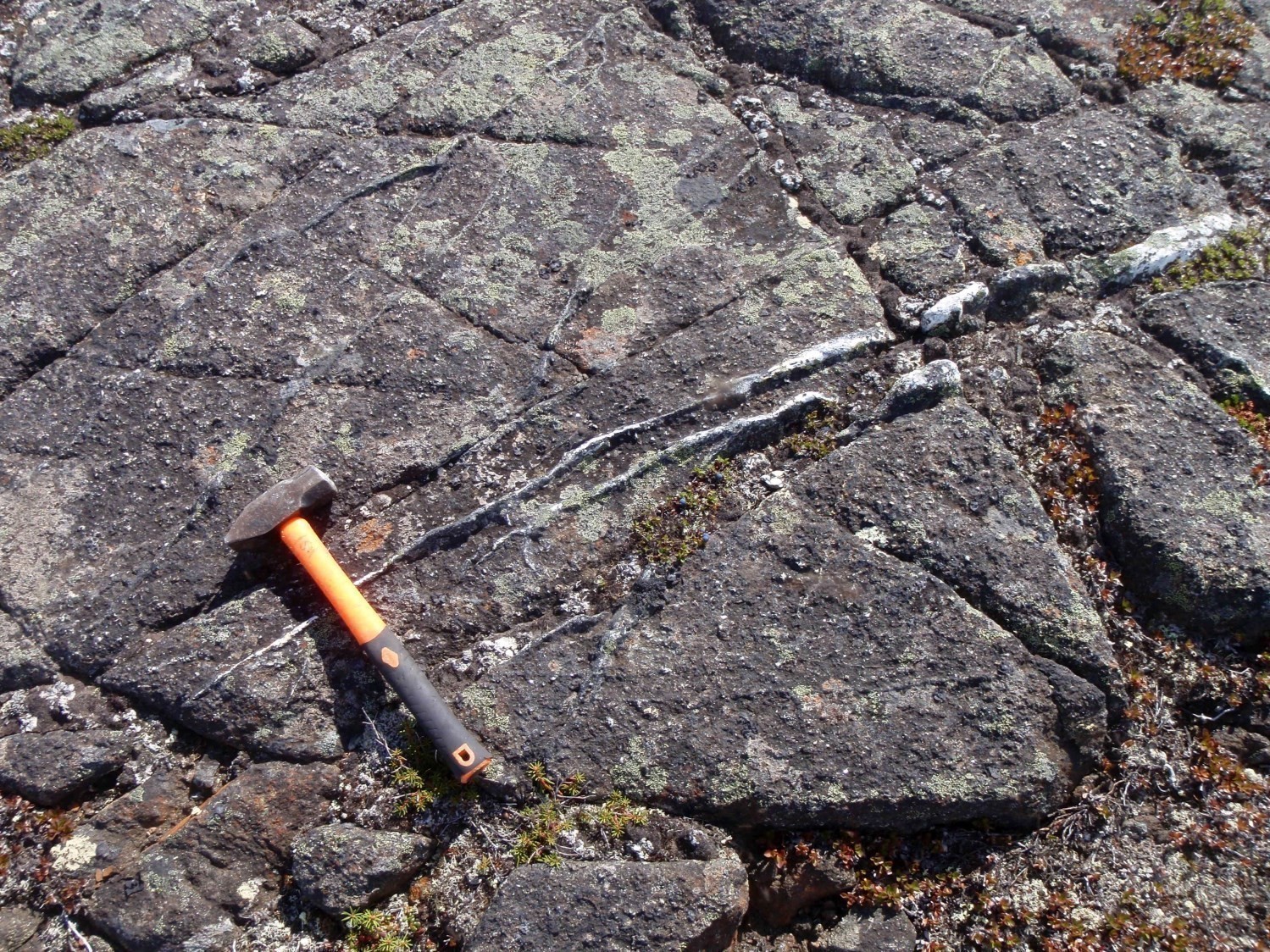 Metawebsterite is dark green, homogeneous and medium to fine grained. It is completely amphibolitized and composed of 95% actinolite or hornblende, ~5% plagioclase and accessory biotite, epidote and sphene. 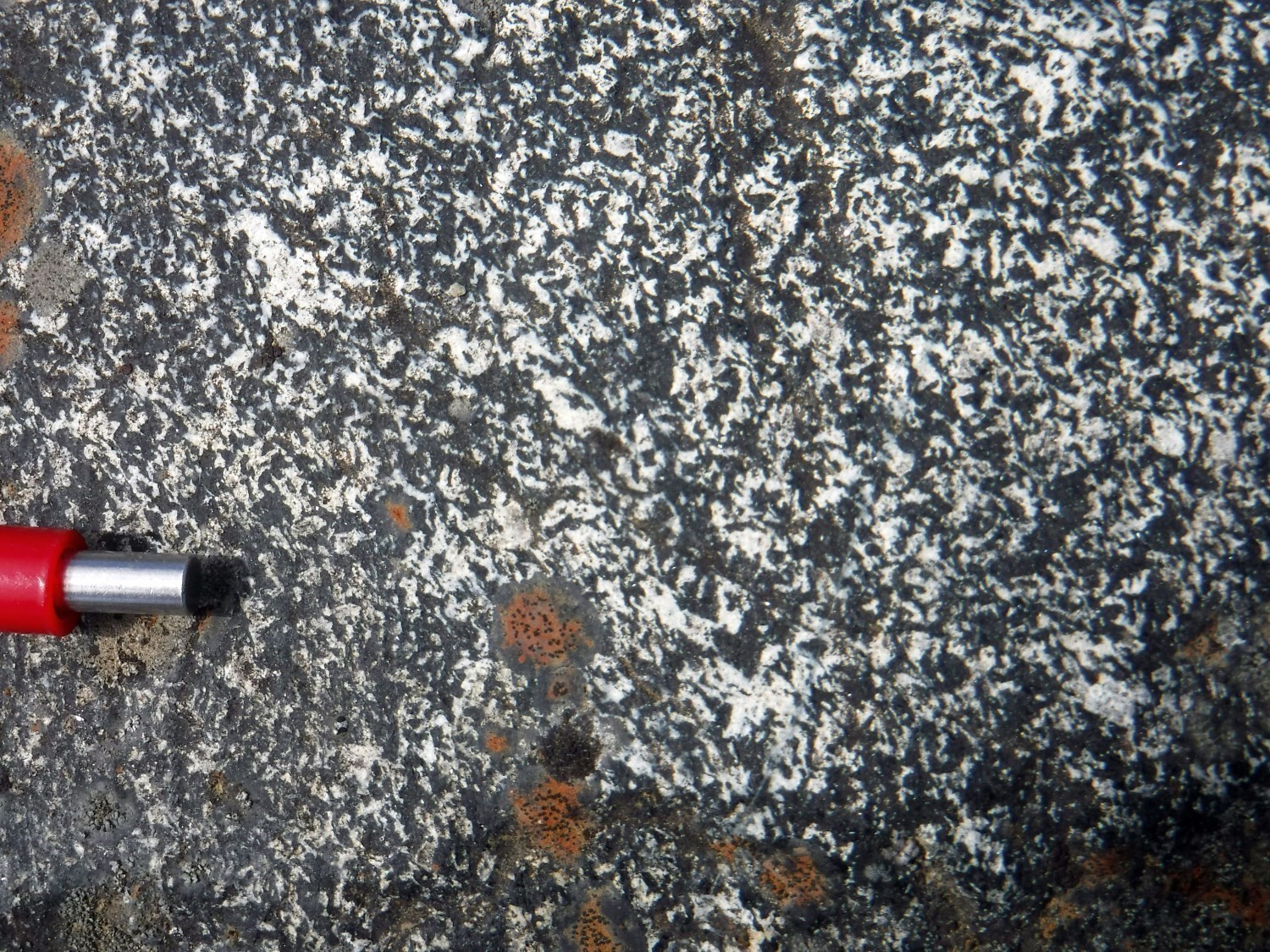 Unit pPpal2 rocks are homogeneous, fine to medium grained, locally plagioclase megacrystalline, and dark grey or greenish black in fresh exposure. In some samples, unit pPpal2 contains a cumulus phase composed of orthopyroxene and clinopyroxene while the intercumulus phase is composed of plagioclase and clinopyroxene. Pyroxenes are variously uralitized, with hornblende rims. In most cases, pyroxenes are completely replaced by amphiboles, which then mark foliation. Plagioclase forms 30 to 50% of the rock. It occurs in a millimetric granular form or as euhedral centimetric megacrysts (cumulus phase) locally zoned. However, the texture is usually augen and granular due to deformation. The abundant presence of plagioclase leads to the local formation of anorthositic gabbro. Intercumulus phases consist of fibrous light green hornblende-actinolite (uralite on pyroxene), bronzite (relics) and opaque minerals. Brown biotite, green hornblende and quartz are occasional. Van der Leeden (1994) mentions the presence of cummingtonite. Accessory minerals are zircon, apatite, sphene, epidote and rutile. 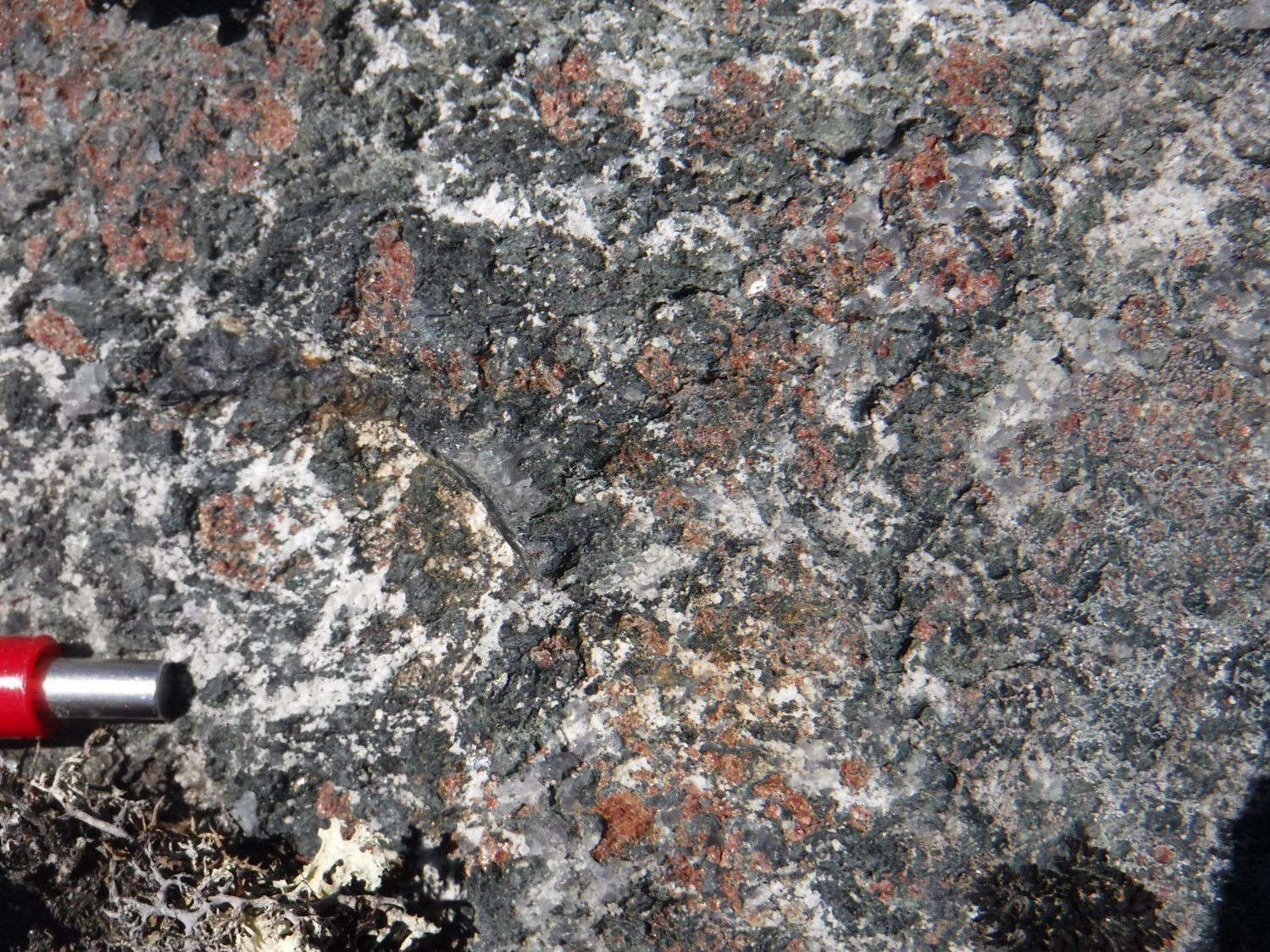 Subunit pPpal2a consists of rocks similar to those of unit pPpal2, but contains 10 to 20% submillimetric garnet. The latter developed in association with radial fibrous hornblende at the interface between plagioclase and uralite (Girard, 1990a). 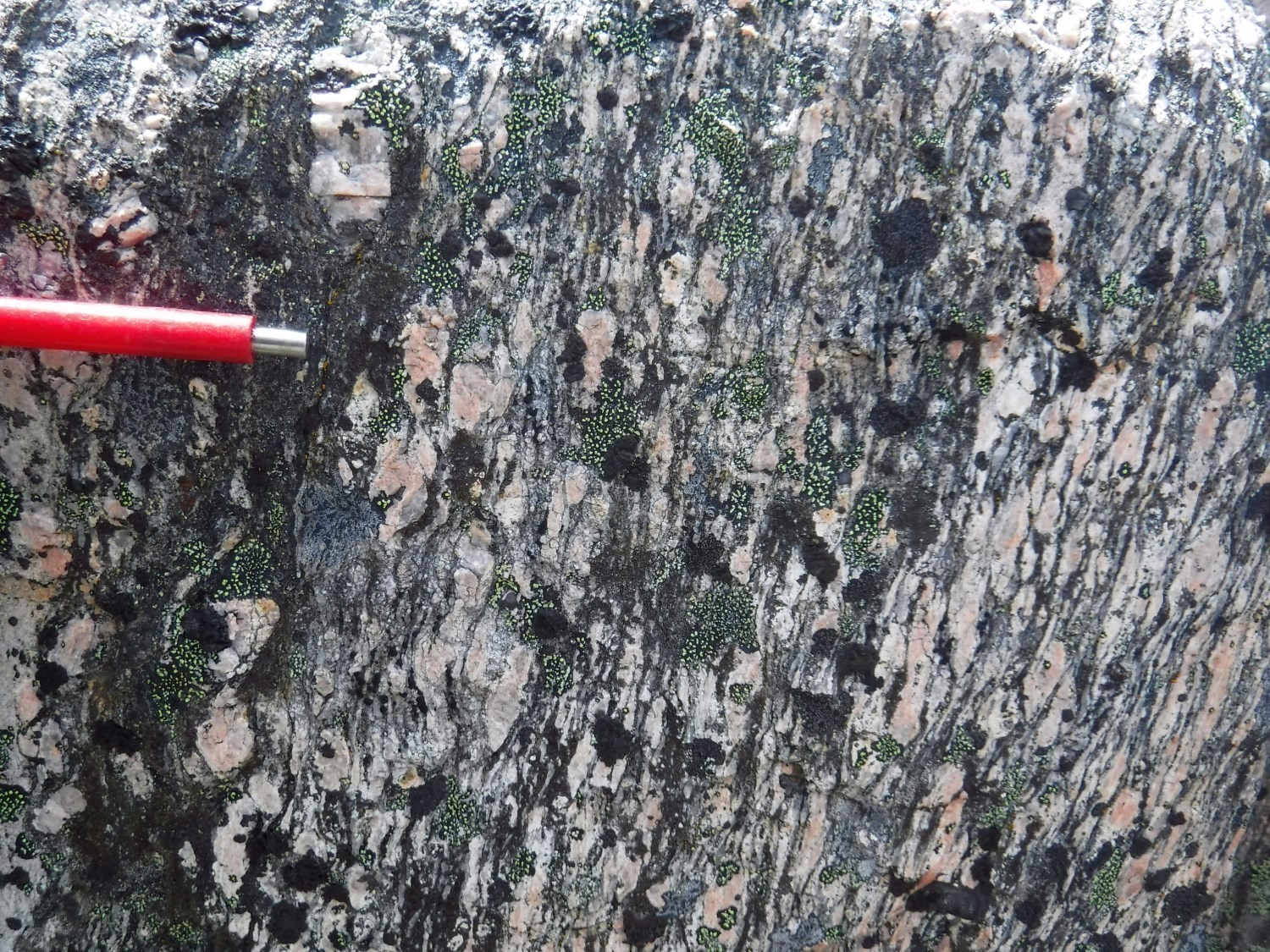 Most granitoids are foliated or show lineations, and many are mylonitic. The rock is rarely massive. Foliations and lineations are formed by the preferential alignment of feldspar phenocrystals (± porphyroclasts) and ferromagnesian minerals. Unit pPpal3 consists mainly of porphyraceous quartz monzodiorite and granodiorite, grey or pink in fresh exposure and light pinkish grey or salmon-grey in patina. K-feldspar, mainly microcline, occurs as 1 to 4 cm long phenocrystals and makes up 10 to 50% of the rock. Phenocrystals are euhedral and not oriented in undeformed facies, but generally have an oblong to augen habit, and a millimetre-thick whitish neoblastic margin. Perthitic orthose and antiperthitic plagioclase are also observed. The edge and fracturing planes of phenocrystals display fine recrystallization in which K-feldspar, albite and quartz grains coexist. Myrmekites are abundant. Plagioclase (2-5 mm) is subhedral to augen. 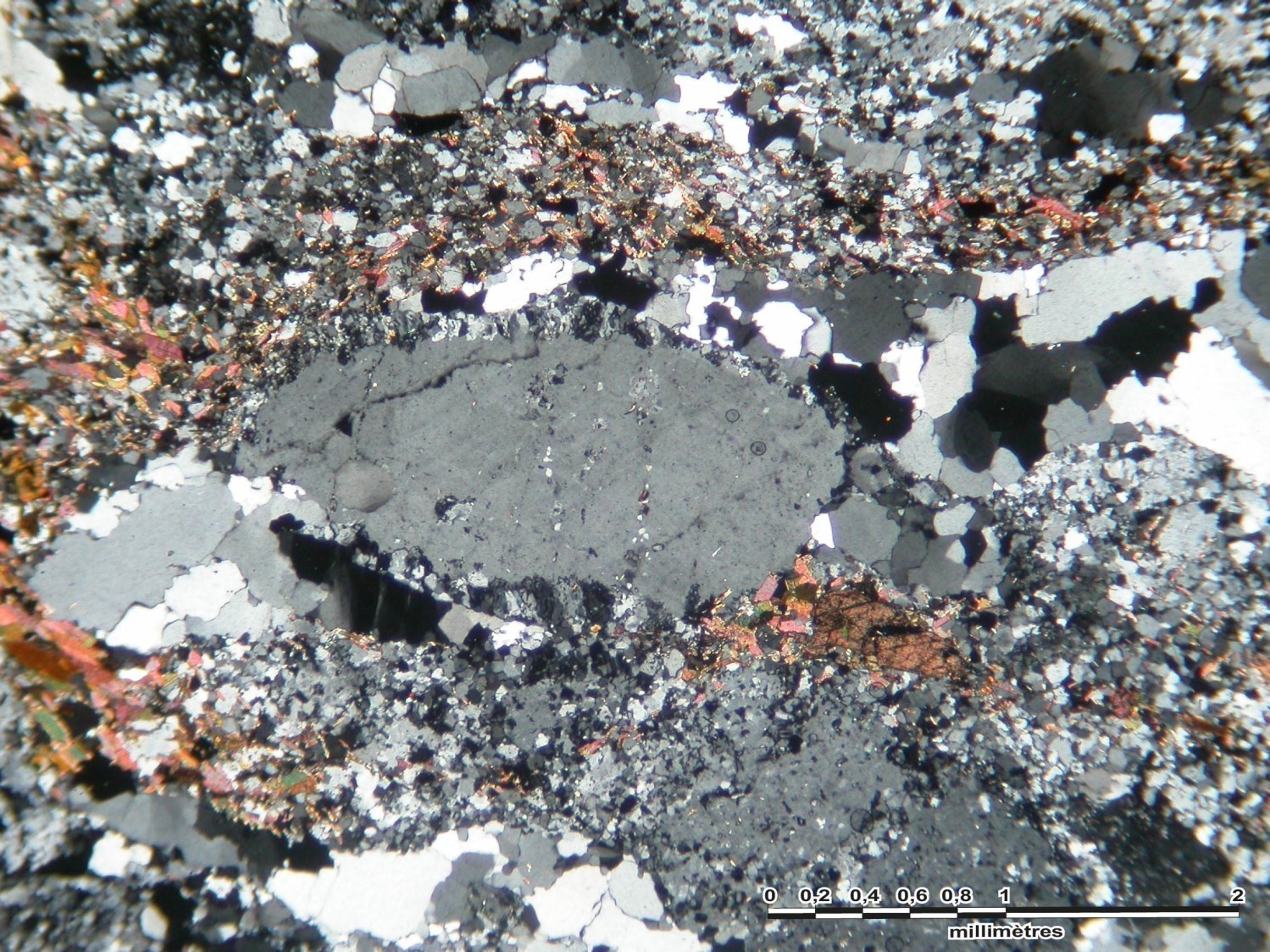 Deformation generates a submillimetric mortar texture. Quartz, in undeformed facies, has a 2 to 4 mm anhedral habit. When deformed, it is concentrated in millimetric polycrystalline bands moulding feldspar porphyroclasts. Ferromagnesian minerals (biotite and hornblende) are either well crystallized (2 mm), or highly granular or dismembered in association with granular plagioclase. Garnet, uralite, orthopyroxene and opaque minerals are present locally as minor phases. However, the presence of orthopyroxene is only observed in the vicinity of unit pPpal2 mafic intrusions, suggesting a xenocryst nature. Zircon, apatite and rutile are accessory phases. Zoisite, pistachite, allanite, sphene, calcite, muscovite, and light brown and green biotite are present due to secondary alteration. Epidote forms shreds in association with calcite and can form symplectites with plagioclase.

The Pallatin Intrusive Suite forms several lenses a few kilometres long and hectometre wide mostly located in the west-central portion of the Mistinibi-Raude Lithotectonic Domain. Two larger masses of the pPpal3 unit stand out: a folded strip in the Pallatin Lake area (southern Ntshuku Complex), 25 km long by 0.4 ﻿km to 2 km wide, and a N-S strip which is ~30 km long by 2 km wide. Unit pPpal3 (73 km2) covers the largest area. Units pPpal1 and pPpal2, as well as subunit pPpal2a (13 km2), are smaller.

Unit pPpal3 locally contains gneiss enclaves of the Advance Complex. It is also cut by intrusions of the Dumans Suite. Units pPpal1 and pPpal2 also form metre to decametre-wide and metre to hectometre-long lenses in unit pPpal3, as well as in the Ntshuku Complex.

The nature of contacts between the Pallatin Intrusive Suite and surrounding rocks is generally masked by mylonitic shearing. When observed, contacts are either sharp or gradual over less than one decimetre. Interstratifications between granitoid and volcaniclastics show a complex pattern occurring at different scales. Enclaves of host rocks continue the contact’s indentations and locally form continuous layers over hundreds of metres in granitoid. Granitoids locally form conformable and continuous metric to decametric levels over hundreds of metres, interstratified with volcaniclastics. The contact between these layers and volcaniclastics is generally sharp. However, Girard (1990a) mentions that transitional contacts over a few metres are highlighted by the appearance of coarse or amalgamated layering, a diminution of the size and content of feldspar megacrysts and a significant neoblastogenesis on these megacrysts, giving them a nebulitic appearance. The origin of these layers remains uncertain, but they could be sills, massive or pyroclastic lava flows, or even recrystallized epiclastics with amalgamated bedding. A well developed and refolded schistosity throughout the granitoid massif, local mylonitic banding and amphibolite facies metamorphism give these intrusions a pre-kinematic nature. As part of the SECP synthesis (Lafrance et al., 2018), low-amplitude porphyritic (fine-grained matrix) layers interstratified in volcanic sequences were assigned to the Ntshuku Complex by Charette et al. (2019).