Intermediate to ultramafic intrusive rocks were recognized in the Raude Lake area by Danis (1991) and Taner (1992). Danis assigned these rocks to the “Lac Raude Gabbroic Complex” and divided it into three informal units: 1) slightly foliated diorite to quartz diorite in the centre (unit B5a); 2) coarse-grained gabbro surrounding diorite (unit B5b); and, 3) metapyroxenite on the edge (unit B5c). Field checks by Hammouche et al. (2012) failed to confirm the presence of ultramafic rocks and the ultramafic unit was abandoned. As part of the Southeastern Churchill Province (SECP) regional synthesis (Lafrance et al., 2018), the main unit was renamed “Raude Suite” by Charette et al. (2019), as it consists of a rock package of similar genetic class. A third informal unit, located on the periphery of the first two, was added at the same time.

The Raude Suite is characterized by a high magnetic susceptibility that clearly distinguishes it from adjacent units on the regional aeromagnetic map. It consists of three informal units: 1) gabbronorite (pPrae1); 2) diorite, quartz diorite and quartz monzonite (pPrae2); and, 3) porphyroclastic quartz monzonite (pPrae3). 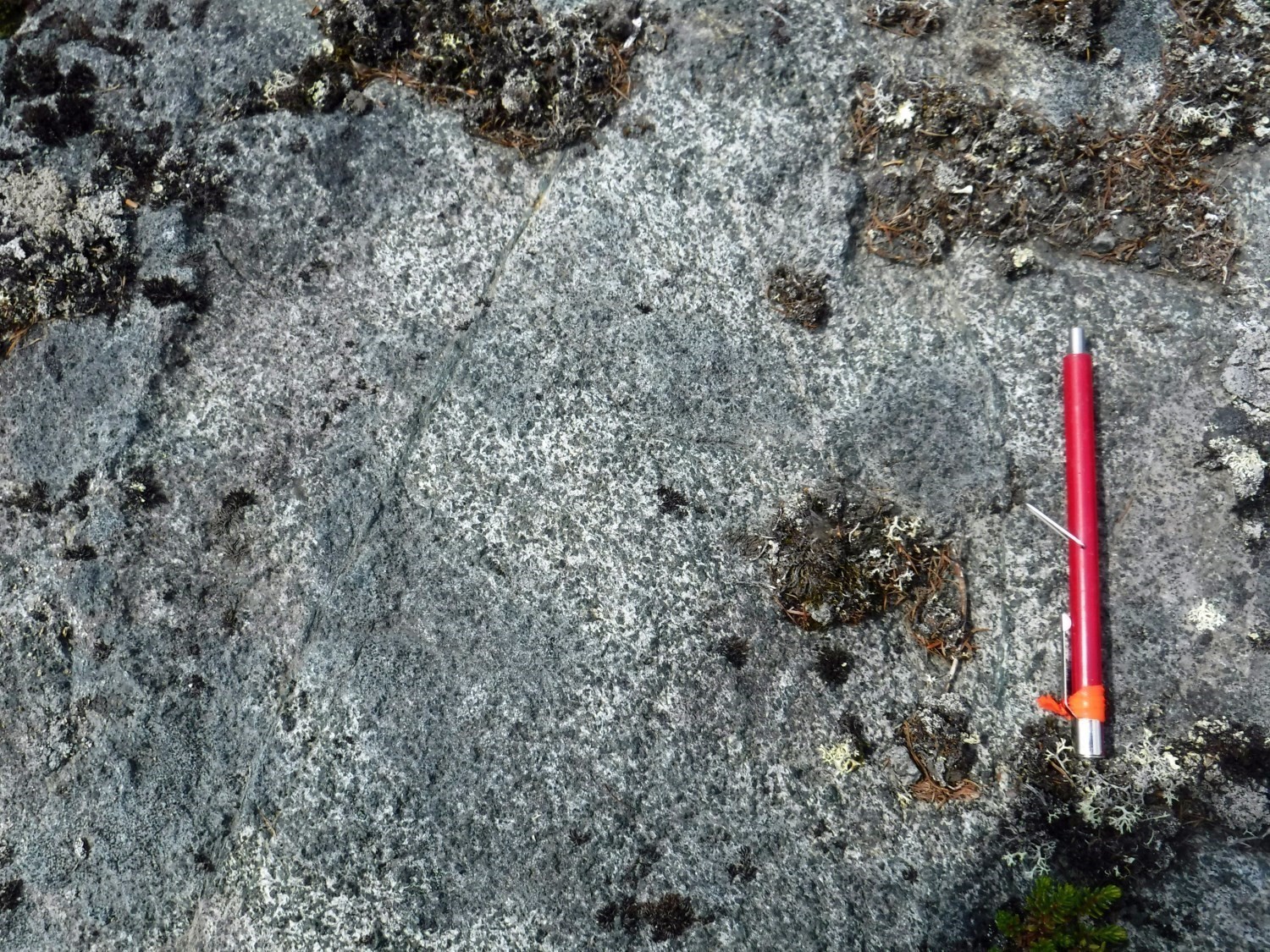 Gabbronorite is fine to medium grained and dark grey with a white and greenish black spotted patina. The rock is generally massive to slightly foliated, but can be very heavily deformed locally. Ferromagnesian minerals make up about half of the rock’s mode. They include clinopyroxene and orthopyroxene variably uralitized. In the southern part of the suite, replacement by amphiboles (hornblende and actinolite) is more extensive and it becomes difficult to properly identify pyroxenes. In this area, plagioclase is also more highly saussuritized and amphiboles are weakly chloritized. In thin sections, gabbronorite is partially recrystallized, but there are still many plagioclase laths, mimicking an ancient subophitic texture. Some pyroxene and plagioclase crystals have recrystallized into very fine subgrains. Locally, deformed polysynthetic twinning in plagioclase and preferential orientation of the matrix are observed. Accessory minerals are, in descending order, biotite, opaque minerals, quartz, apatite, epidote, carbonate and sphene. Danis (1991) also mentions low amounts of cummingtonite. 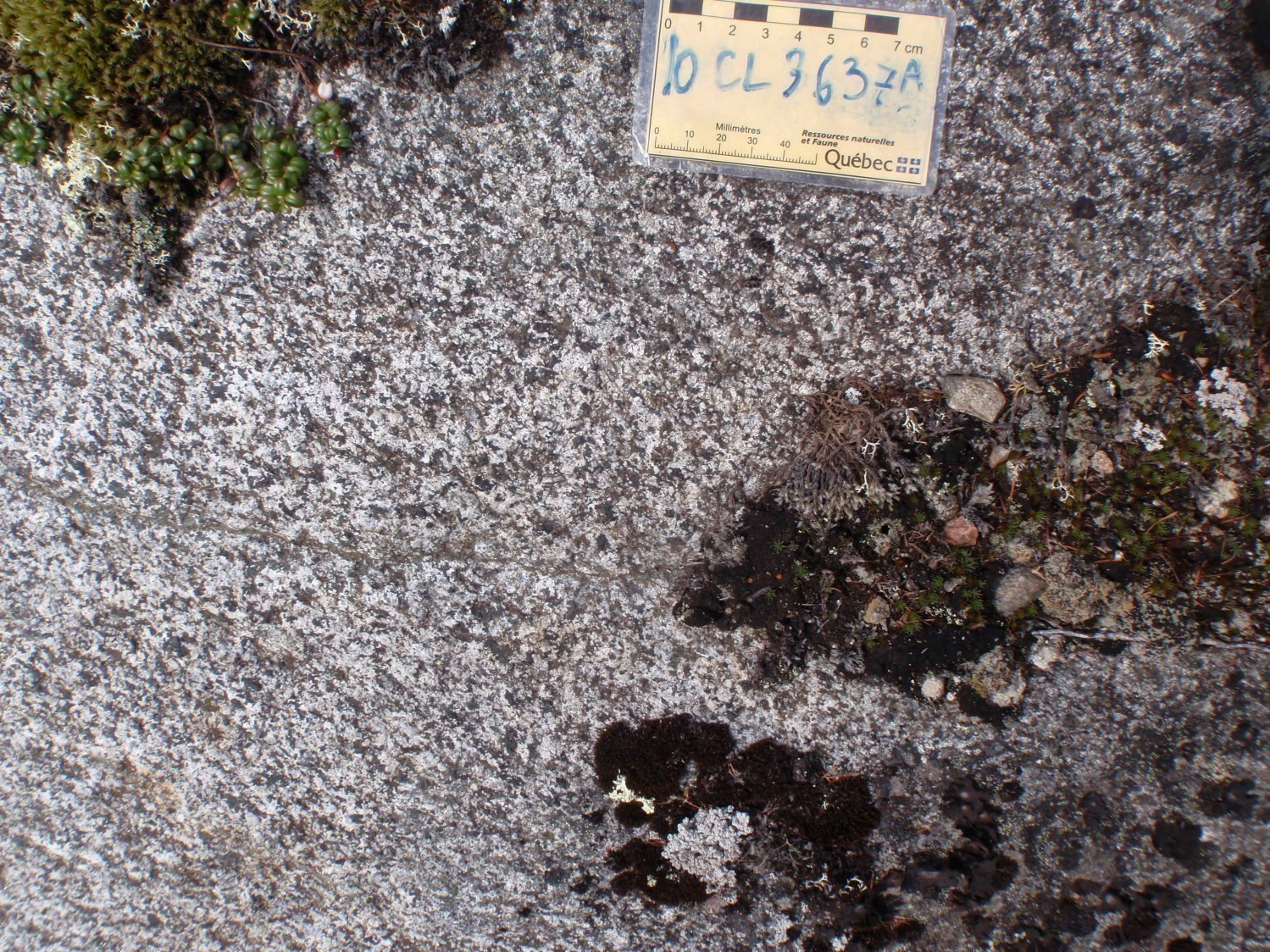 Unit pPrae2 consists mainly of black and white speckled diorite, locally purplish grey. It also contains quartz diorite and quartz monzodiorite in lesser amounts. These rocks are medium grained, homogeneous and massive to foliated. They contain 20 to 40% ferromagnesian minerals, 2 to 5% quartz and <3% K-feldspar, the rest being mostly plagioclase. Unit pPrae2 rocks are partially recrystallized, but larger, often sericitized, plagioclase laths are also observed. Ferromagnesian minerals form clusters of a few millimetres. They are dominated by either hornblende or pyroxene (clinopyroxene and orthopyroxene) with a lower amount of brown to red biotite (<5%). Hornblende replaces pyroxene, in places completely, but some samples show only uralitization (tremolite ± hornblende) around it. Accessory minerals are magnetite, as euhedral and scattered grains, apatite, epidote and zircon. 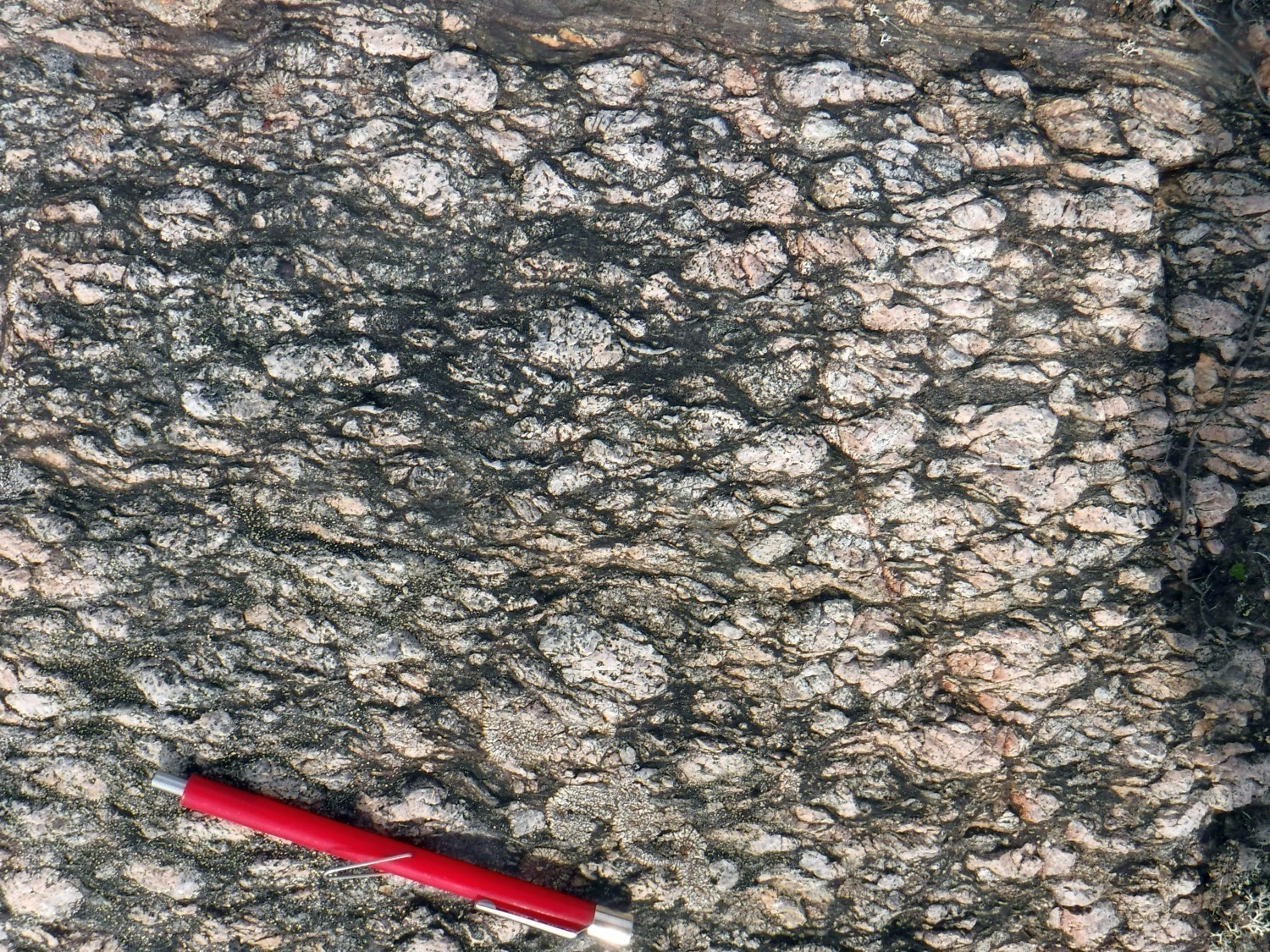 Unit pPrae3 was introduced to include porphyroclastic monzonite that was previously associated with the Pallatin Intrusive Suite (pPpal3) due to its resemblance to porphyroclastic rocks of this suite. However, the presence of pyroxene, their characteristic brownish pink to purplish shade and their location on the edges of the gabbronorite (pPrae1) and diorite (pPrae2) units of the Raude Suite make it possible to distinguish the pPrae3 unit from the Pallatin Intrusive Suite. Quartz monzonite contains 35-50% K-feldspar, mainly as 1-3 cm long phenocrystals. These phenocrystals are frequently stretched in the protomylonitic foliation. The matrix consists of alternating quartz, plagioclase and ferromagnesian mineral bands and laminae. Thin sections display very fine recrystallization of the matrix (grinding) encompassing porphyroclasts, as well as deformation microcorridors through them. Ferromagnesian minerals, which are also concentrated in fine bands, include biotite, hornblende, orthopyroxene, clinopyroxene and actinolite in varying proportions. Amphibole replaces pyroxene. Sphene, opaque minerals, epidote, apatite and zircon are accessory phases.

The Raude Suite forms an elongated mass (~23 km by 10 km) along an NW-SE axis in the south-central part of the Mistinibi-Raude Lithotectonic Domain, at the boundary between sheets 23P08 and 23P01. Units pPrae1, pPrae2 and pPrae3 cover similar areas of 70 km2, 64 km2 and 53 km2 respectively.

Raude Suite rocks are in sharp contact with those of the Mistinibi Complex. Given the relative age of these units, this contact is likely tectonized. The Raude Suite contains a few gneiss enclaves similar to those of the Advance Complex and is cut by intrusive rocks of the Dumans Suite.