The Nekuashu Suite was defined by Lafrance et al. (2016) in the Brisson Lake area (sheet 24A) as a package of mafic and intermediate intrusive rocks associated with a strong positive magnetic anomaly.

Unit nApPnek1 is the main unit of the Nekuashu Suite. It comprises various intrusive phases of mafic to intermediate composition, mainly monzodiorite, leucogabbro, monzogabbro and anorthosite; incidentally, there are quartz monzodiorite, gabbro and monzonite. These different intrusive phases are in transitional contact with each other and are generally difficult to distinguish on outcrops due to their similarity. Leucogabbro and monzodiorite locally contain diffuse and irregularly shaped decimetric pockets of leucogabbro and anorthosite. Ovoid-shaped fine-grained mafic enclaves, similar in composition to rocks of unit nApPnek2, are common within unit nApPnek1. These decimetric enclaves regularly show scallop edges, suggesting magma mixing. Unit nApPnek1 is also intruded by decimetric to metric dykes of coarse-grained to pegmatitic syenogranite likely belonging to unit nApPnek3, as well as decimetric to hectometric dykes of subophitic gabbro assigned to the Slanting Dykes. 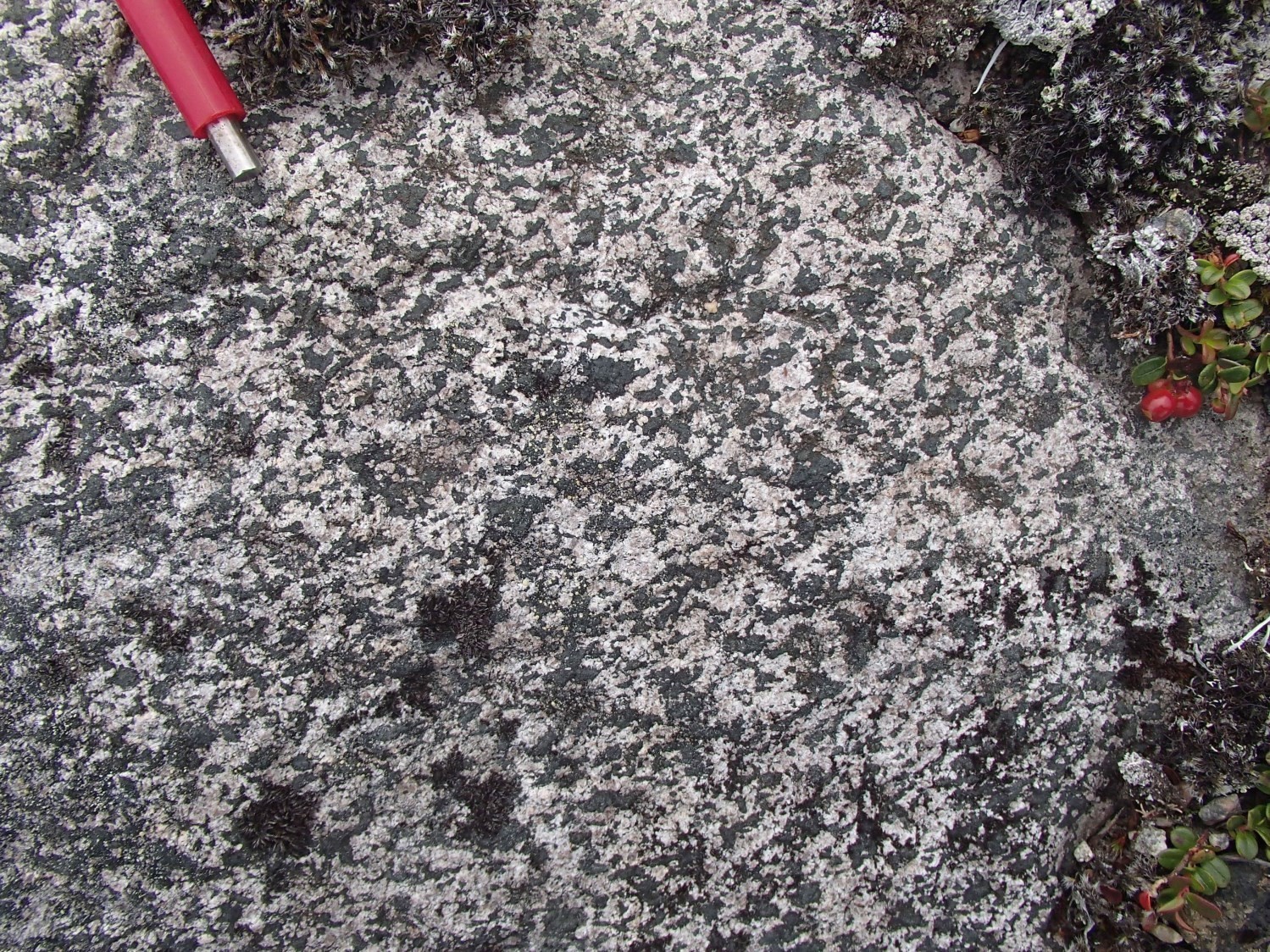 Intermediate to mafic rocks of unit nApPnek1 are characterized by their homogeneous, leucocratic appearance and purplish plagioclase in the majority of cases. From a megascopic perspective, rocks have an intrusive texture, and are medium grained and black and purplish (or black and white) speckled. They are moderately foliated and locally show strong lineation near fault zones. In thin sections, however, rocks exhibit high recrystallization, particularly at grain edges where it can be very advanced with the formation of very fine quartz and feldspar grains. Anorthosite is completely recrystallized and granoblastic. Myrmekitic and perthitic textures were also observed along microcline grain edges. The quartz content is between 5% and 12%, while the amount of microcline, unevenly distributed in the rock, ranges from 2% to 15%. These minerals are sparser (<2%) in gabbro and anorthosite.

Ferromagnesian minerals make up 15-30% of the rock and form millimetric clusters. Some Gabbroic phases are more melanocratic and locally contain 45-65% ferromagnesian minerals. Green amphibole is the dominant phase, although brown biotite is common in places. Amphibole clusters, consisting of an assemblage of actinolite and fine hornblende, show intergrowths with irregular to rounded quartz inclusions that could be linked to almost total replacement of clinopyroxene by hornblende. Also visible in these clusters are clinopyroxene relics. The core of clusters is lighter, while the edges, which seem to represent the limits of large crystals, are darker. Epidote (1-4%) is consistently present and next to ferromagnesian clusters. Orthopyroxene relics are sparse and highly altered. Accessory minerals are abundant, particularly opaque minerals (2-3%, mostly magnetite), apatite, zircon and sphene, more sparsely allanite and carbonate. In the southern portion of the intrusive suite, unit nApPnek1 rocks display moderate to high plagioclase saussuritization, as well as biotite chloritization. These alterations are lower in the northern Nekuashu Suite. 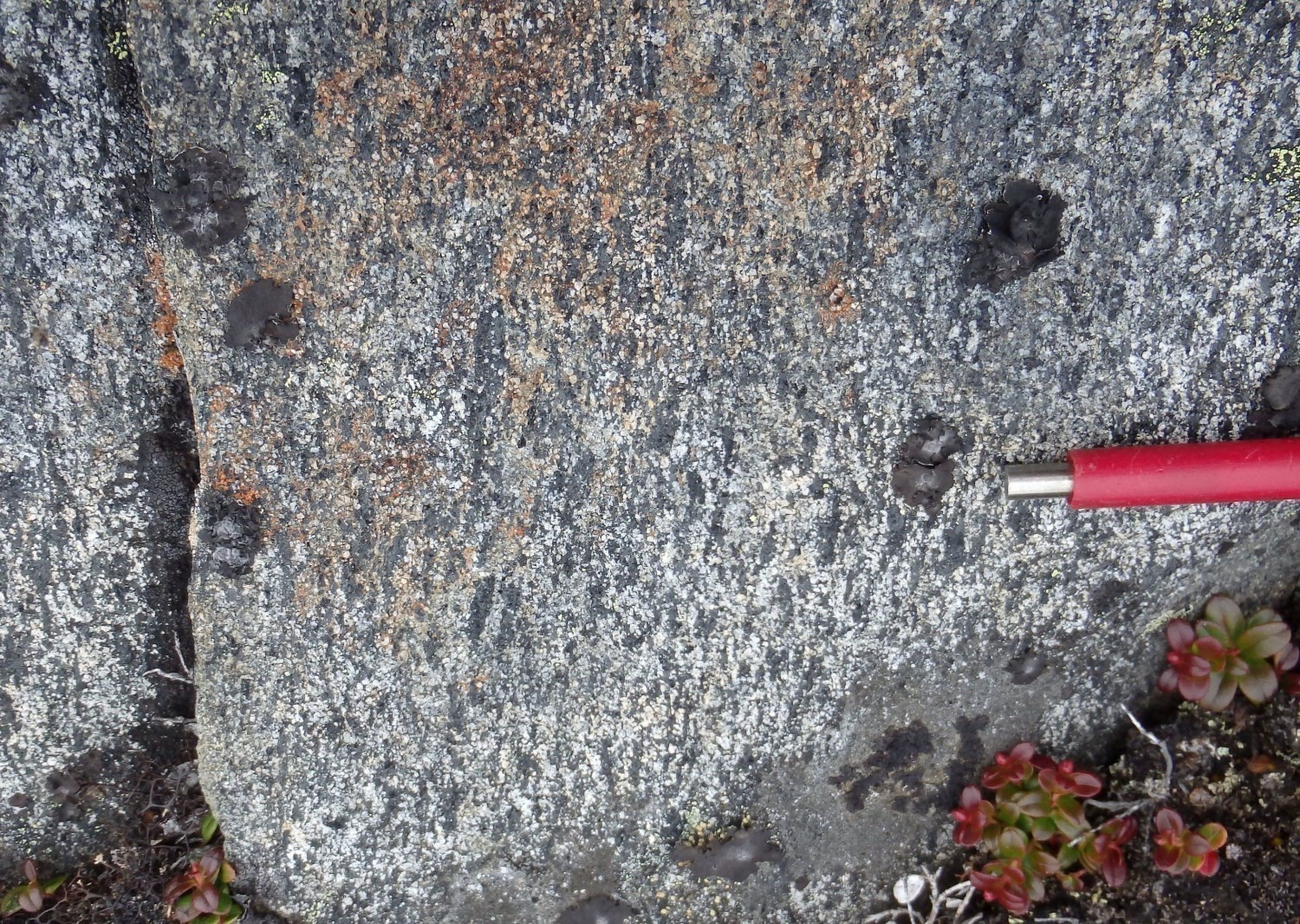 Unit nApPnek2 is distinguished from unit nApPnek1 by a finer grain size, a pepper-and-salt patina and a medium to dark grey colour in fresh exposure. The succession of centimetric to decimetric layers of different composition and grain size gives the rock a banded or even gneissic appearance. The presence of coarse-grained pink granite injections occurring as centimetric to metric dykes or as millimetric to centimetric bands parallel to foliation accentuates banding. Monzodiorite, anorthosite and coarser-grained leucogabbro, identical to those of unit nApPnek1, were observed on several outcrops. In the field, outcrops of this unit were all described as diorite or quartz diorite. However, chemical analyses, staining and thin sections revealed a significant amount of K-feldspar. In fact, the composition of unit nApPnek2 varies mainly from monzogabbroic to monzodioritic with local diorite, quartz monzodiorite and monzonite. The rock is well foliated and displays partial grain recrystallization. Quartz content is generally <5%, but can be as high as 10 to 15% in some areas. K-feldspar is mostly present (2-15%), while the content of ferromagnesian minerals ranges from 15% to 35%. 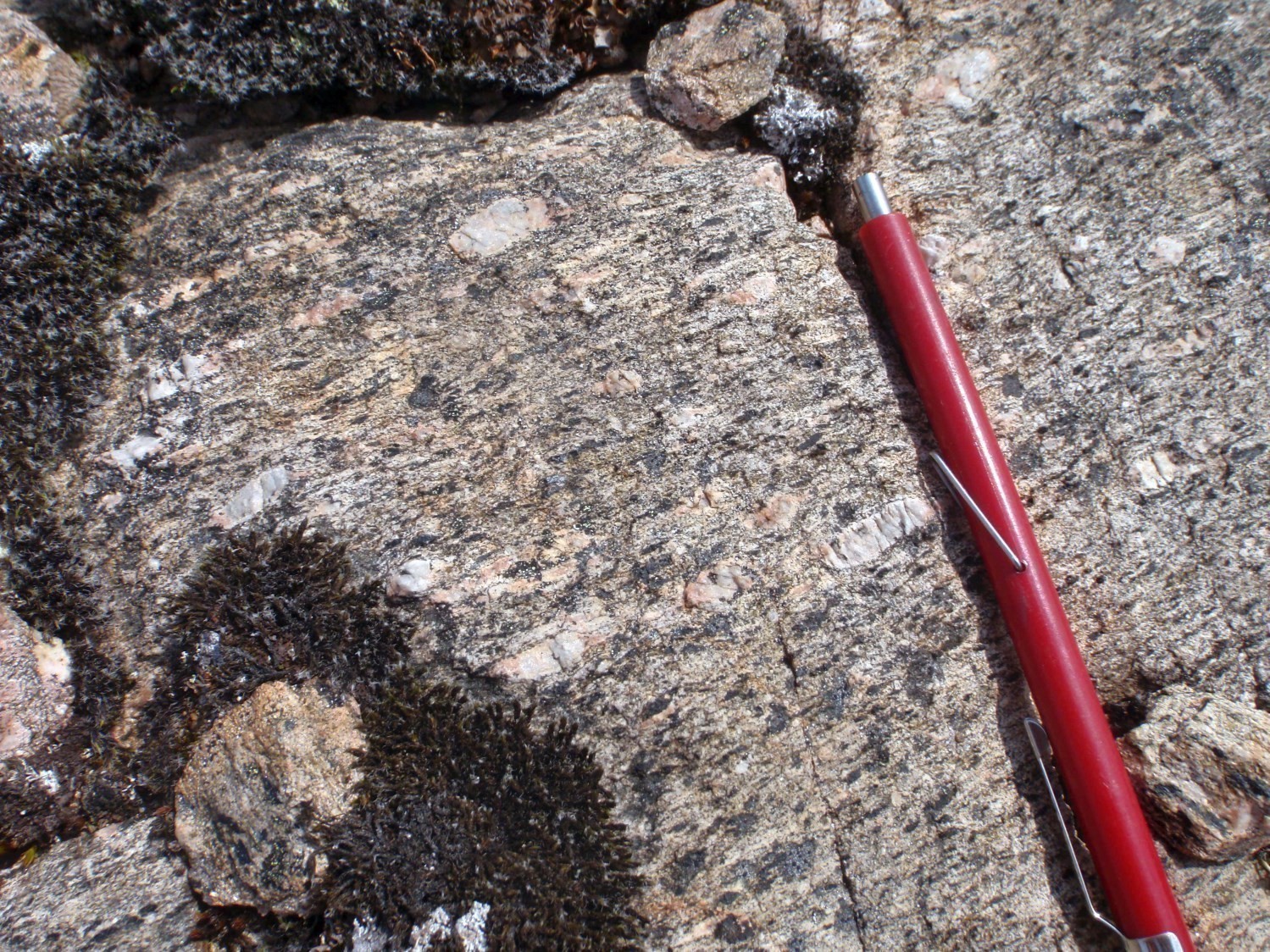 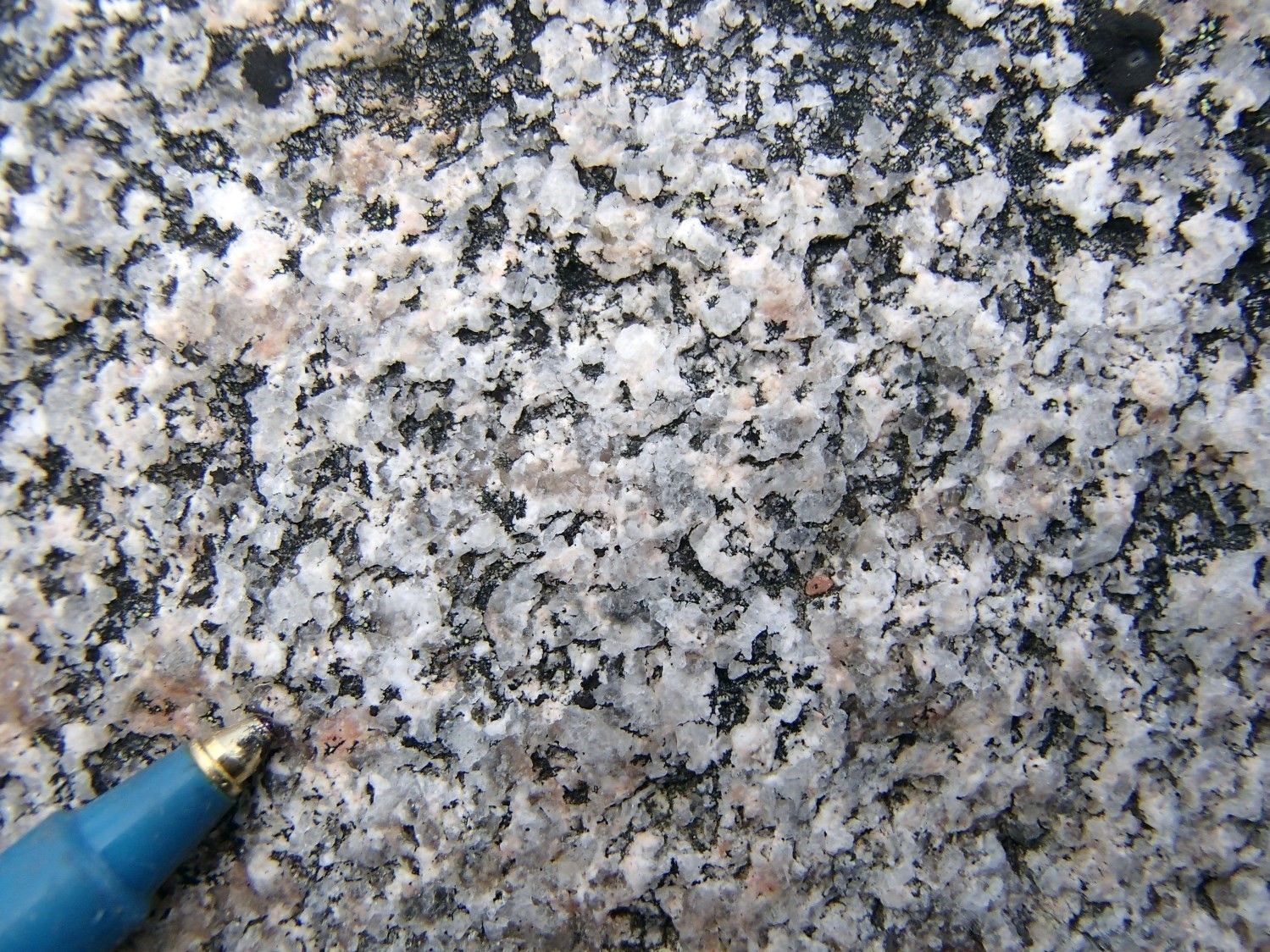 Unit nApPnek3 consists of well-foliated quartz syenite and syenogranite, as well as later pegmatitic phases (massive) that cut all units of the Nekuashu Suite. They are pink to purplish and display initial recrystallization with very fine grains surrounding coarser anhedral grains. A mylonitic fabric and strong stretch lineation are also developed near fault zones. These rocks contain 10 to 30% quartz and 5 to 10% ferromagnesian minerals, mainly brown to green biotite and epidote, and green hornblende locally. Accessory minerals are present in varying amounts and include muscovite, sphene, chlorite, opaque minerals, zircon, apatite and allanite. Myrmekitic and perthitic textures are very common in unit nApPnek3 rocks.

The Nekuashu Suite is an elliptical-shaped unit, ~60 km long by 4 to 14 km wide, located at the NW end of the Mistinibi-Raude Lithotectonic Domain (Charette et al., 2019). Units nApPnek1, nApPnek2 and nApPnek3 cover areas of 382 km2, 147 km2 and 24 km2 respectively within this lithotectonic domain.

The dating of a purplish monzodiorite sample (outcrop 2014-IL-3142) yielded a crystallization age at the Neoarchean-Paleoproterozoic boundary.

The Nekuashu Suite forms a rigid ovoid body around which the mylonitic foliation is moulded. On the east side, it is in shear contact with metasedimentary units of the Mistinibi Complex. On the west side, it is limited by the Rivière George Shear Zone. It is therefore in contact with certain units of the George Lithotectonic Domain, such as the De Pas Granitic Suite and the Saint-Sauveur and Tunulic complexes. In general, the high competence of rocks that make up this intrusive sequence is a major reason why they are less affected by deformation and have a recrystallized appearance, as evidenced by the weak foliation and grain size reduction strictly located at grain edges. The relatively anhydrous nature of these lithologies could explain the minimal migmatization that affected the Nekuashu Suite in comparison with adjacent metasedimentary units of the Mistinibi Complex, as well as the limited crystallization of metamorphic zircons and monazites.

Field observations suggest that the Nekuashu Suite was emplaced following a polyphase process involving successive intrusions and injections of magmas of different compositions. It is neatly cut by the Slanting Dykes, consisting of subophitic gabbro dykes oriented mainly NE-SW to N-S. These dykes have not been observed elsewhere in the Southeastern Churchill Province and may also represent a late phase associated with the emplacement of the Nekuashu Suite. However, the absence of foliation, even along fault zones of the Rivière George Deformation Corridor, indicates that these dykes are much more recent.