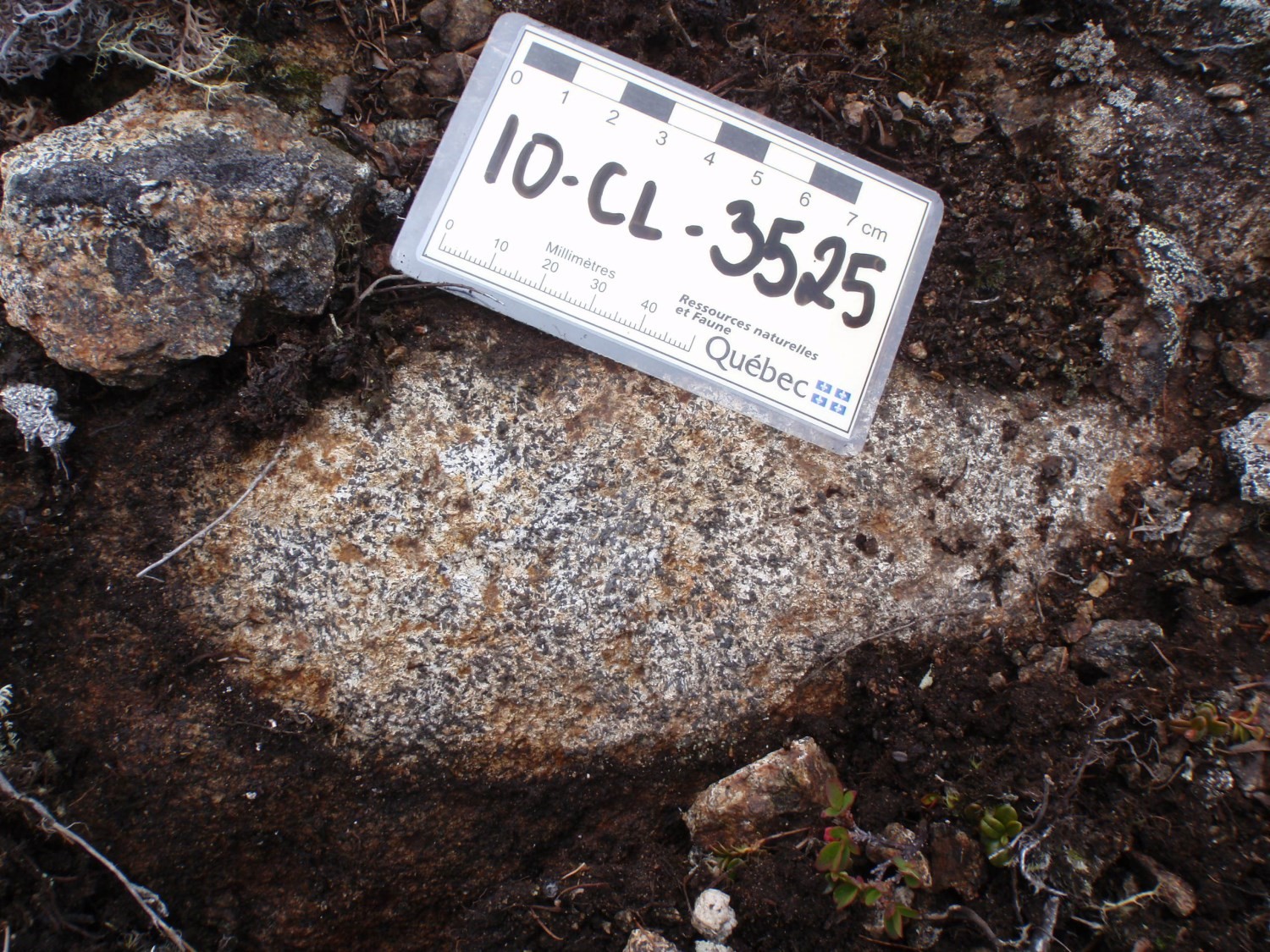 The Harp Dykes were introduced by Meyers and Emslie (1977) in Labrador to group a swarm of ophitic gabbro dykes oriented NE-SW to ENE-WSW. They were further subdivided by Cadman et al. (1993) from geochemistry. These dykes transcend the boundary between Quebec and Labrador and have been described by Hammouche et al. (2011, 2012) in the Bonaventure Lake and Zeni Lake areas. They were also observed in the northern part of the Résolution Lake area in checks conducted as part of the synthesis of the Southeastern Churchill Province (SECP; Lafrance et al., 2018).

The Harp Dykes were subdivided into three groups by Cadman et al. (1993) using spider diagrams. These subdivisions have been named according to three type localities: Harp UT (Umiatoriak Island), Harp PT (Pitsiutatsitikulluk Island) and Harp CO (Comma Island). Both Harp UT and PT dykes have a positive barium anomaly, but Harp PT dykes also have a negative phosphorus anomaly. Harp CO dykes are also characterized by a negative phosphorus anomaly and have a slightly different orientation from other dykes, ranging from NE-SW to N-S. A priori, dykes sampled in Quebec appear to be Harp UT dykes. 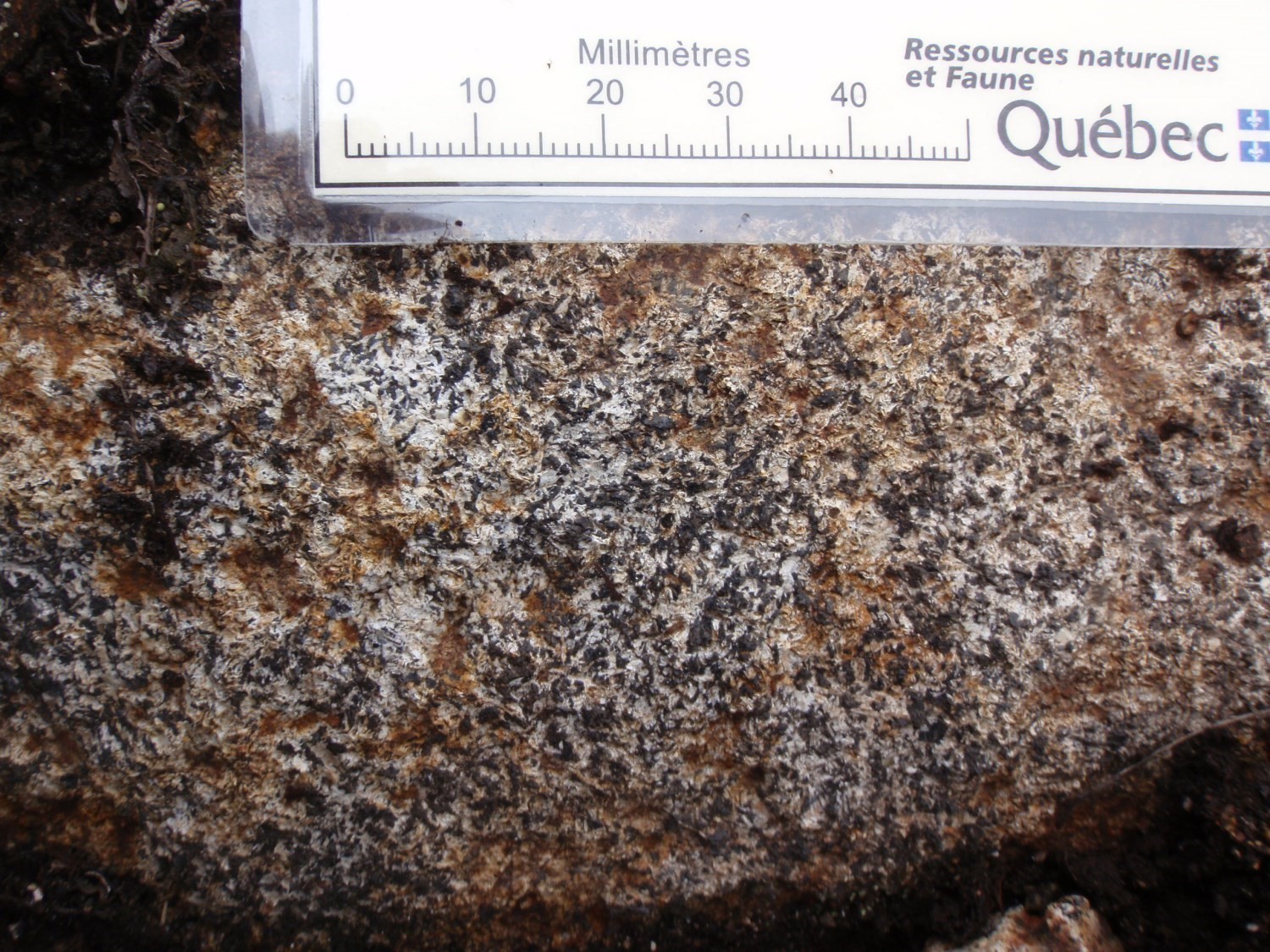 Dykes are not very exposed and have only been observed on a few isolated outcrops in Quebec. However, they are readily identifiable on aeromagnetic maps where they form positive linear anomalies. Dykes consist of massive olivine gabbro, blackish grey in fresh exposure and brownish yellow in alteration patina. Gabbro is either medium grained in the centre of dykes, or very fine grained to aphanitic at the edge and in smaller dykes. Devitrified glass was observed in a small dyke in Labrador (Meyers and Emslie, 1977). Rocks of both facies have a subhedral ophitic texture and are mostly composed of plagioclase, clinopyroxene and olivine. In addition to these minerals, the matrix contains small amounts of K-feldspar, quartz, biotite and apatite. Plagioclase forms euhedral to subhedral laths and interstitial grains in the matrix. Laths are zoned and contain serpentinized olivine and fine crystals of clinopyroxene and opaque minerals. Plagioclase is variably saussuritized. Accessory minerals are chlorite, epidote and zoisite, as well as serpentine and iddingsite, in fractures of olivine grains or as a complete replacement locally. Serpentinization is accompanied by many very fine opaque minerals, possibly magnetite, located inside and around olivine.

Meyers and Emslie (1977) report that the majority of dykes are 50 m wide or more. In Quebec, magnetic lineaments suggest an average width of 100 m and can reach more than 65 km in length. These dykes are located in the SE part of the SECP and in the Nain Province, in Labrador. More specifically, in Quebec, they are concentrated in the SE portion of sheet 23P, as well as in sheets 13M04, 13M05 and 13M12. The Harp Dykes are mostly concentrated in the Mistinibi-Raude Lithotectonic Domain (14 dykes; Lafrance et al., 2019), but have also been observed in the George (6 dykes; Charette et al., 2018) and Rachel-Laporte (2 dykes) domains.

The Harp Dykes are one of the youngest units in the SECP. Among others, they cut the Mistastin Batholith, De Pas Supersuite, Dumans Suite, and the Advance, Zeni, Saint-Sauveur, Bourdon and Mistinibi complexes. In Labrador, the Harp Dykes cut the Harp Lake Intrusive Suite (Meyers and Emslie, 1977; Kerr and Hamilton, 2014).