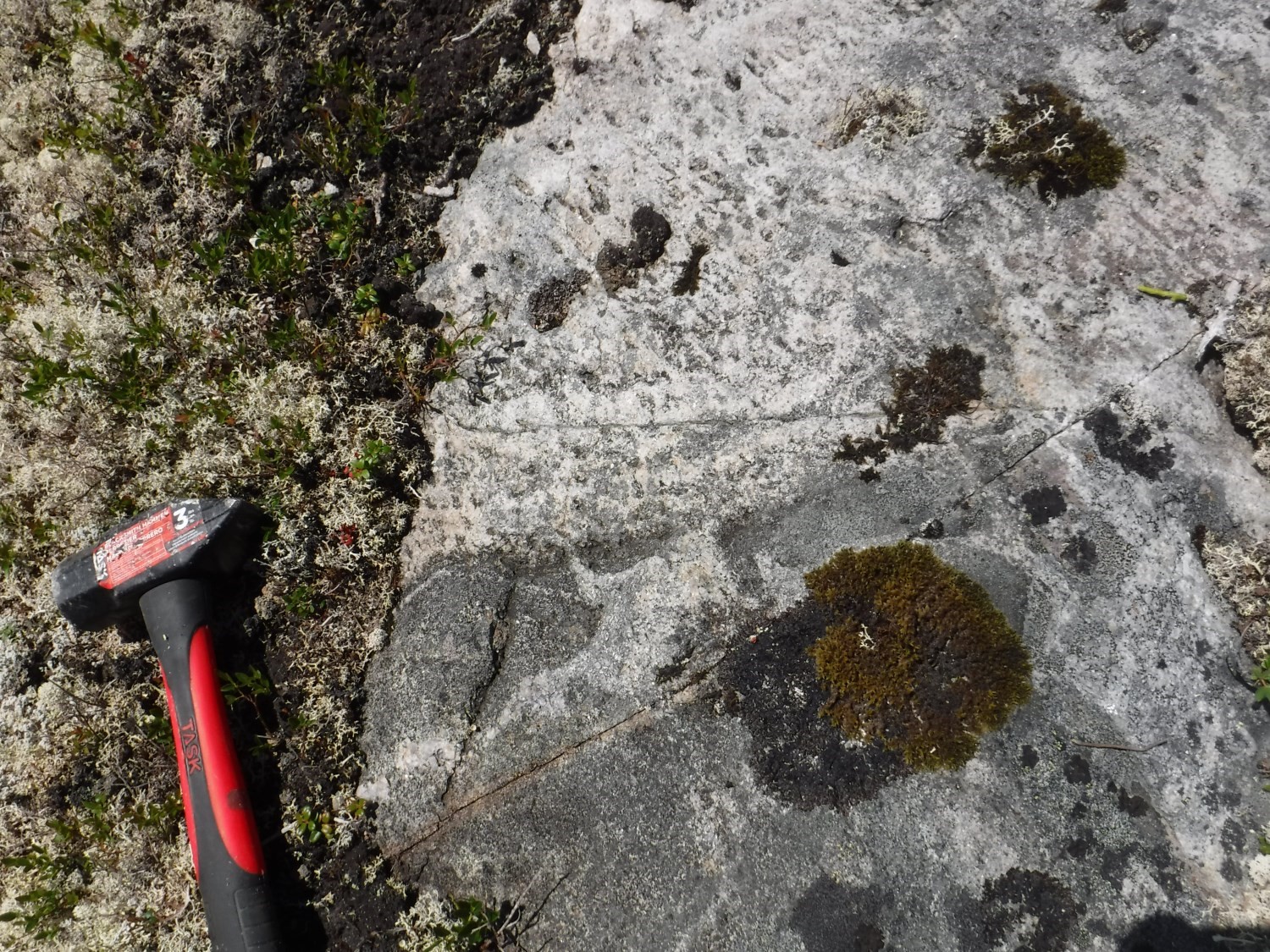 The term “Griffis Gneiss” was introduced by Hammouche et al. (2011) to refer to a package of Archean gneiss found within the “Rachel-Laporte Zone”. This unit corresponds to Unit 1 of Donaldson (1966), consisting of gneiss and migmatite, and units 5b and 6 of Farhig (1964), consisting respectively of hornblende orthogneiss and biotite orthogneiss. As part of a synthesis of the Southeastern Churchill Province (SECP) (Lafrance et al., 2018), the unit was renamed “Griffis Complex” by Lafrance et al. (in preparation) to comply with the North American Stratigraphic Code. Since Lafrance et al. (2018) have also identified new lithotectonic domains within the SECP, the Griffis Complex is now included in the Baleine Lithotectonic Domain.

The Griffis Complex contains various lithological units, the main of which are tonalite, tonalitic gneiss, paragneiss, gabbro and gabbronorite.

Tonalite is whitish, homogeneous, medium grained and regularly contains biotite laminae resembling schlierens. These could be mobilisate derived from the melting of gneiss (and paragneiss), but field relationships cannot confirm this. However, the tonalite’s appearance is more heterogeneous at the edge of mafic intrusions. In addition to centimetric to metric enclaves of gabbro and gabbronorite, it contains numerous biotite laminae giving it a coarsely banded appearance. Tonalite is composed of 5-10% ferromagnesian minerals, mainly biotite and epidote, with local hornblende. In thin sections, the rock is partially recrystallized and shows partial replacement of plagioclase by scapolite or a muscovite-carbonate-epidote assemblage. Accessory minerals are chlorite, sphene, opaque minerals and apatite. 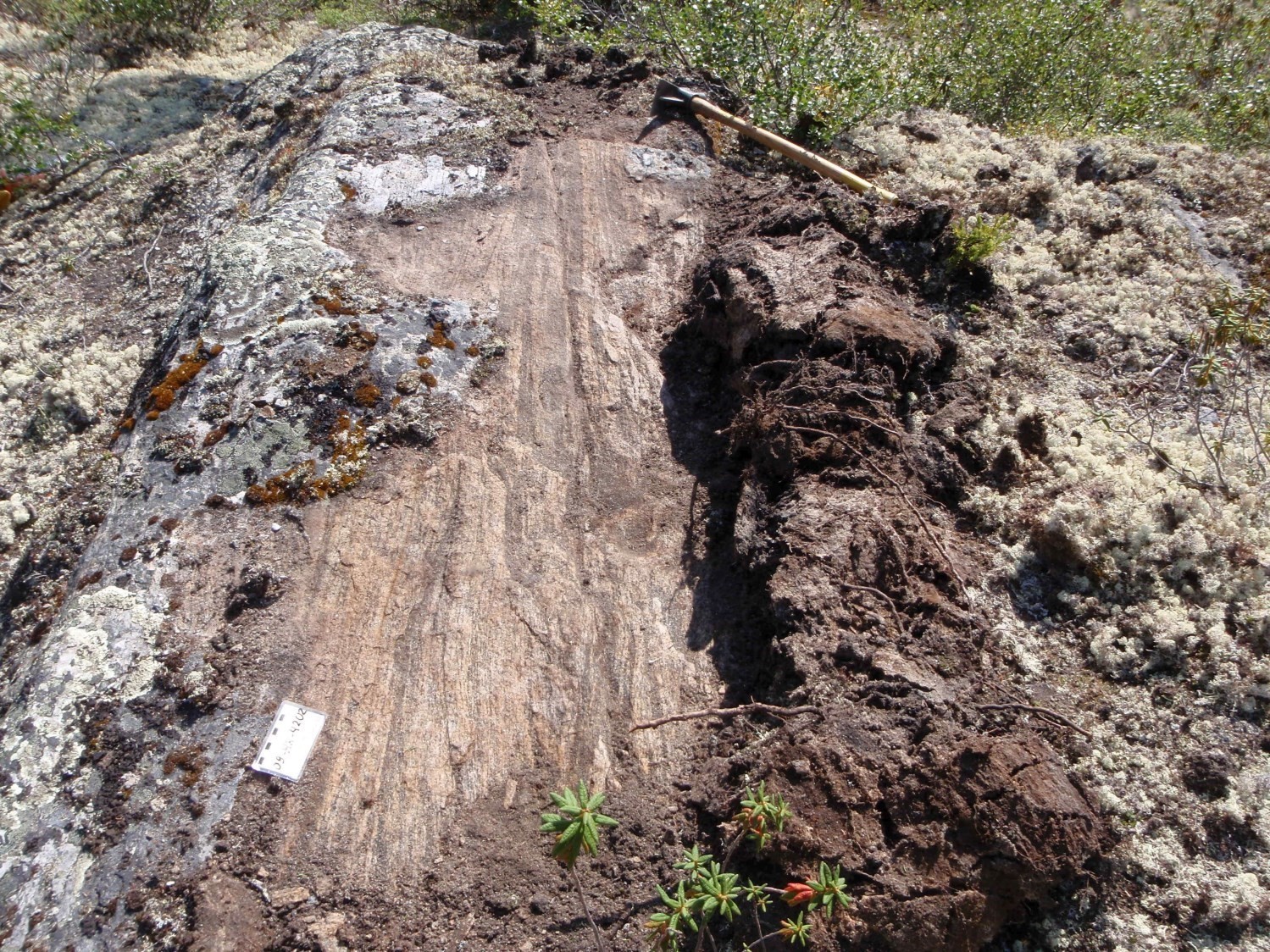 Tonalitic gneiss was observed in the Bonaventure Lake area (Hammouche et al., 2011). It is beige, granoblastic, even grained, medium grained and shows banding enhanced by the presence of biotite laminae. It contains low amounts of K-feldspar (2-3%), biotite (>5%) and locally amphibole, epidote, magnetite and muscovite. Zoisite, apatite and sphene are present in minor amounts. Hercynite has also been observed in thin sections. Centimetric to decimetric layers of fine to medium-grained dark green amphibolite are interstratified in the gneiss.

Paragneiss is highly migmatized. The paleosome is light grey, fine grained and rich in K-feldspar. The leucosome is whitish, medium grained, mostly tonalitic in composition and forms centimetric bands. It is leucocratic with <5% biotite that marks foliation. Migmatized paragneiss contains 7-12% millimetric to centimetric garnet rich in quartz inclusions. Accessory minerals are sparse and represented by muscovite, opaque minerals and apatite.

A gneiss sample collected in the Bonaventure Lake area (2009-CL-3269) yielded an initial age of ~2789 Ma, interpreted as the crystallization age, and a second age of ~2634 Ma, representing an age of remobilization or metamorphism (David et al., 2011). The Archean age is similar to that of several tonalite units in the Superior Province, but it is also similar to those obtained in gneiss of the Ungava Complex. The age of remobilization or metamorphism is comparable to metamorphic ages obtained in rocks of the Ashuanipi Subprovince (2641-2632 Ma; Percival et al., 1992; Parent, 1998; Wodicka et al., 2009) forming part of the Archean basement west of the New Quebec Orogen (NQO). Based on U-Pb data obtained from zircons, the Griffis Complex does not appear to have recorded metamorphism related to the NQO (1820-1770 Ma; Wardle et al., 2002).

The Griffis Complex is located in the SW portion of the Baleine Lithotectonic Domain. Since there are not many outcrops, it is presumed to be in contact with the Labrador Through to the SW and the Rachel-Laporte Domain to the NE (Donaldson, 1966). It is cut by intrusions of the Gamelin Enderbite.