Arkosic and arenitic metasedimentary rocks of the Grand Rosoy Suite were first mapped by Fahrig (1964), Danis (1988), Bourque (1991) and Girard (1995). The latter formally grouped these lithologies in the Grand Rosoy Formation (Laporte Group), considering the homogeneity of facies, their extent and their cartographic continuity. Girard (1995) also distinguished meta-arkose and muscovite schists, the latter representing a minor facies (20%) of the unit. Given the presence of paragneiss and paraschist, strong metamorphic recrystallization and the low abundance of primary structures, Lafrance et al. (in preparation) have redefined this unit as a suite, judging that a lithodemic classification was more adequate to comply with the North American Stratigraphic Code (NASCN, 1983, 2005). The Grand Rosoy Suite now includes some of the rocks previously assigned to the Secondon Suite by Charette et al. (2016), namely those located in the Baleine Lithotectonic Domain. The Secondon Suite is now restricted to the Rachel-Laporte Lithotectonic Domain.

The Grand Rosoy Suite consists mostly of leucocratic to hololeucocratic (<5% ferromagnesian minerals) pinkish white to greyish or pinkish beige metasedimentary rocks. In places, a greenish colour is associated with more abundant muscovite. Reddish clusters are also produced by hematite. The Grand Rosoy Suite is divided into two informal units based on the amount of micas and the homogeneous to laminated or schistose to gneissic textures: 1) meta-arkose and meta-arenite; and 2) paraschist and paragneiss. These lithologies usually alternate at the hectometre scale, probably based on variations in the protolith’s composition. 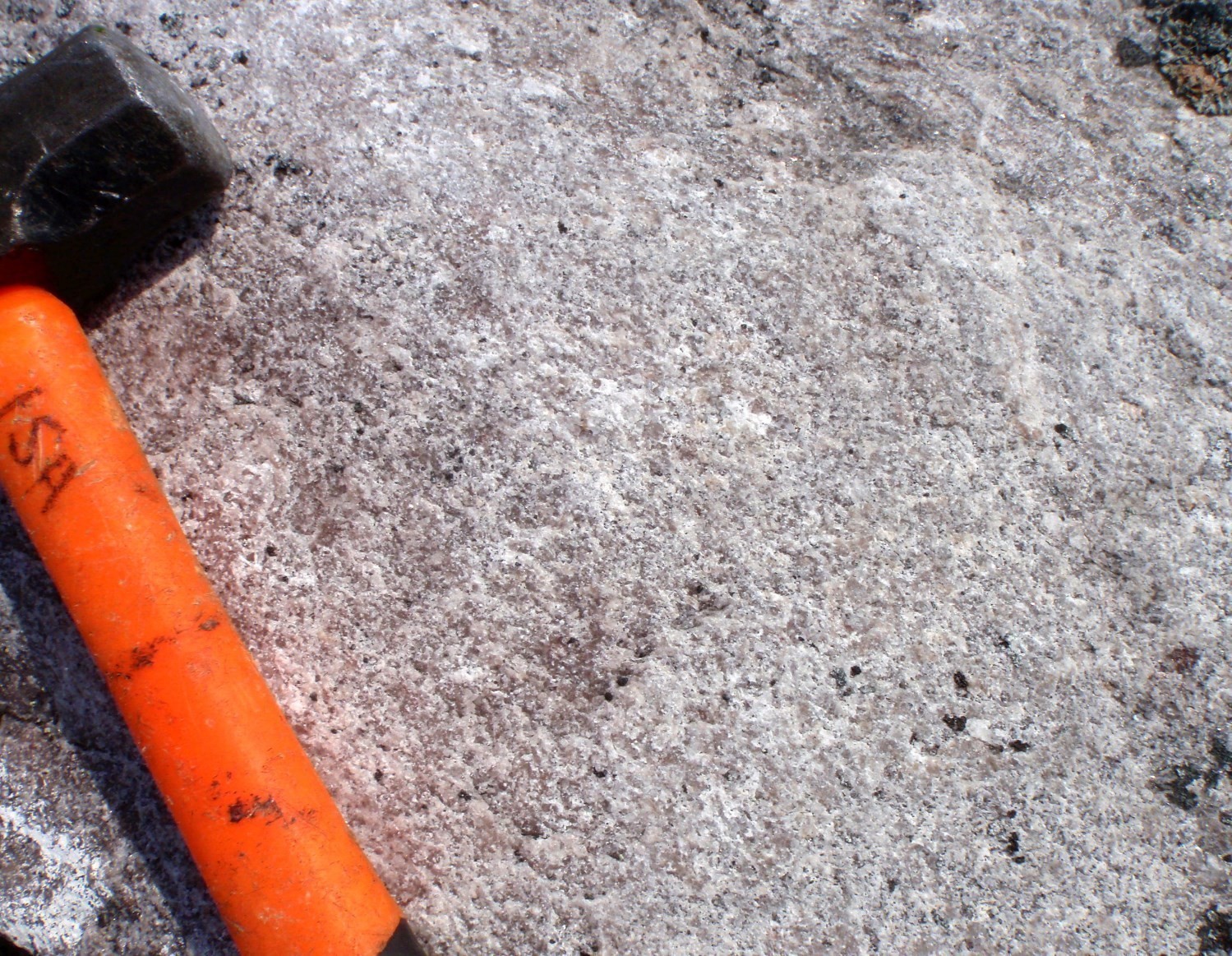 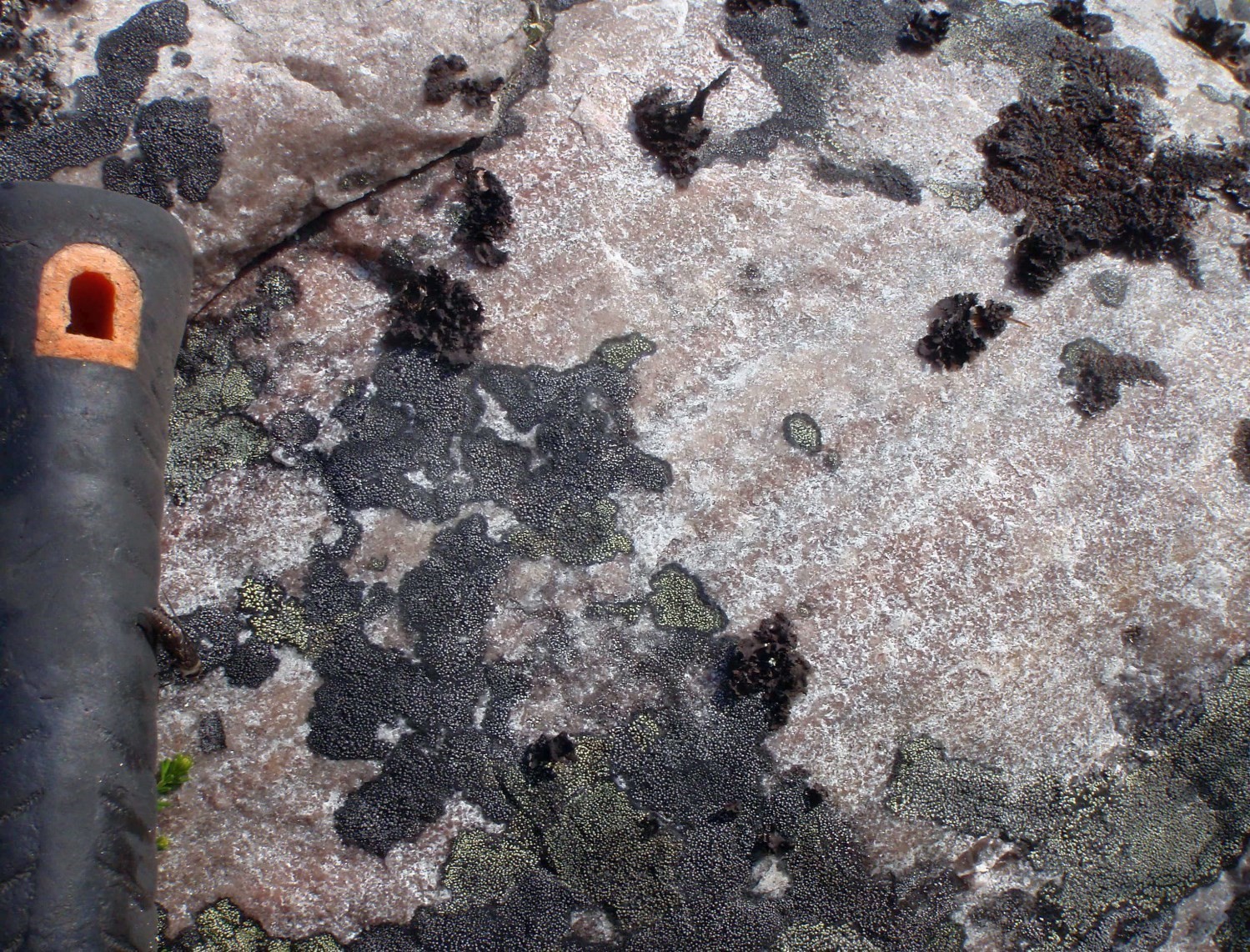 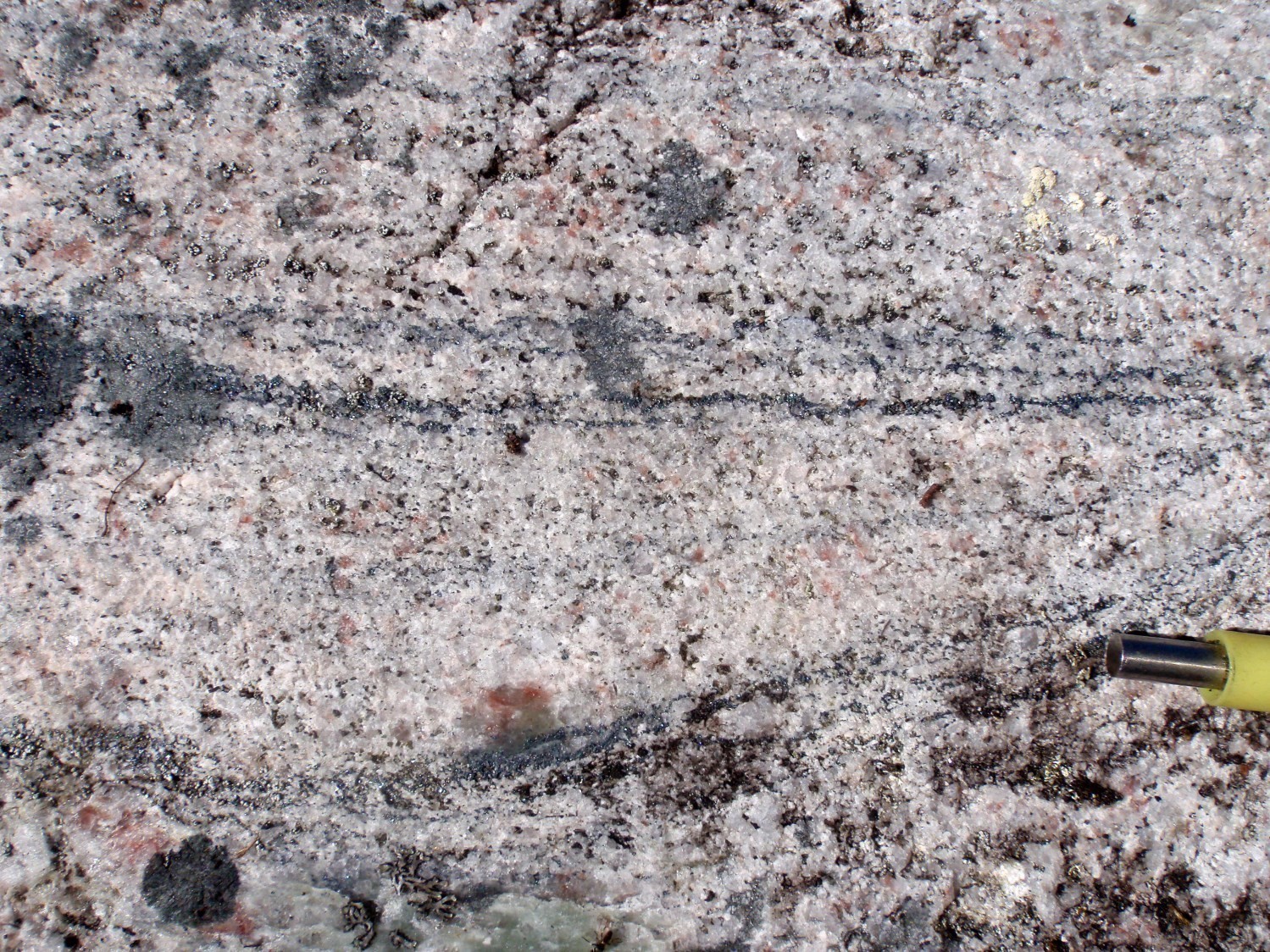 Unit nAgy1 consists of meta-arkose, pebble meta-arkose and meta-arenite. It is fine to medium grained, and homogeneous, laminated or banded. When homogeneous, these rocks have a massive, competent appearance and can be confused with granitoids. When laminated, they contain millimetric laminae of muscovite, specularite and, in places, biotite. The centimetre to decimetre-thick pink or reddish bands are associated with the presence of hematite, whereas whitish bands contain more quartz with or without disseminated specularite. Bands gradually vary from fine to medium grained or are locally delineated by muscovite, specularite and biotite laminae. These bands can be straight, parallel to laminations or oblique. Girard (1995) suggests that these could be locally preserved planar or trough oblique stratification of metric wavelength. 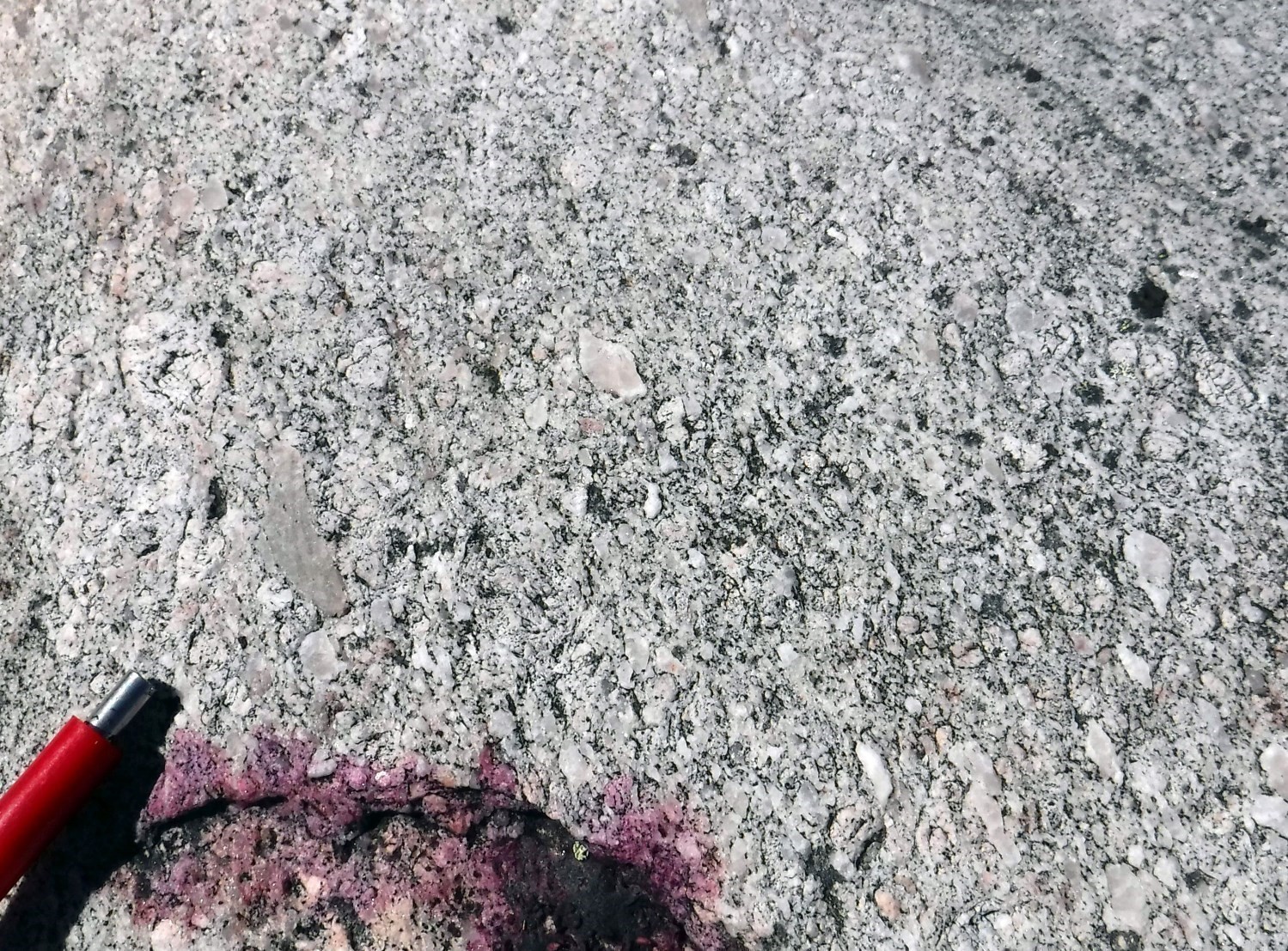 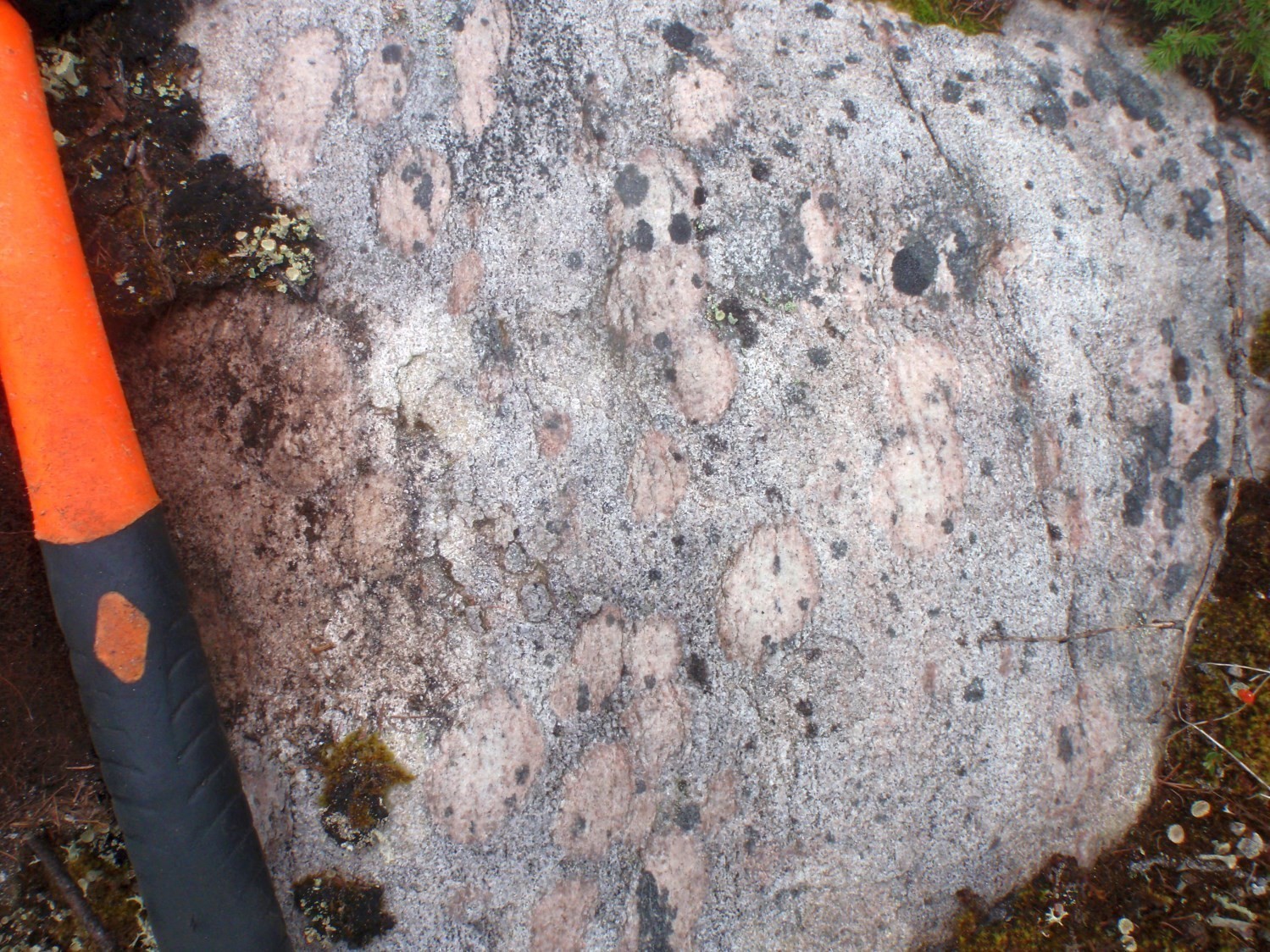 On several outcrops, smoked quartz, quartz-hematite, feldspar or granite clasts float in the arenitic or arkosic matrix. These are mostly rounded, stretched in places, and range from a few millimetres to <2 cm. Fragment-rich beds of a few centimetres are locally observed. Girard (1995) notes that meta-arkose and meta-arenite typically form pure sequences containing local beds of white quartzite and muscovite paraschist. These metasedimentary rocks contain locally quartz-sillimanite nodules (faserkiesel) whose abundance varies according to beds, possibly reflecting primary bedding. Sillimanite occurs as flexuous clusters and fine needles in a very fine matrix (quartz ± feldspar). These nodules are commonly observed in large metamorphic belts, but their origins remain enigmatic (From and Larson, 2014).

The quartzofeldspathic matrix of unit nAgy1 is even grained and slightly to moderately recrystallized. Locally, matrix grains are subrounded and do not appear to be affected by recrystallization. Homogeneous rocks having an intrusive rock appearance are heterogranular with an anhedral matrix. Several lithologies show coarser quartz and microcline crystals locally rimmed by fine crystals. Locally, quartz also forms zones elongated in the main foliation. Thin muscovite flakes (5-25% of the mode) are distributed homogeneously in the matrix and commonly mark two well-defined foliations. The ferriferous composition of muscovite is recognized in thin sections by the yellow straw colour of flakes. Green biotite is generally less abundant than muscovite (5-10%). These micas form, in places, laminae or millimetric lenticular clusters associated with opaque minerals, mainly specularite. Thin hematite inclusions commonly form brownish dust distributed irregularly. Accessory minerals include apatite, tourmaline, zoisite, monazite and zircon. Locally, piedmontite-rich beds have been observed. 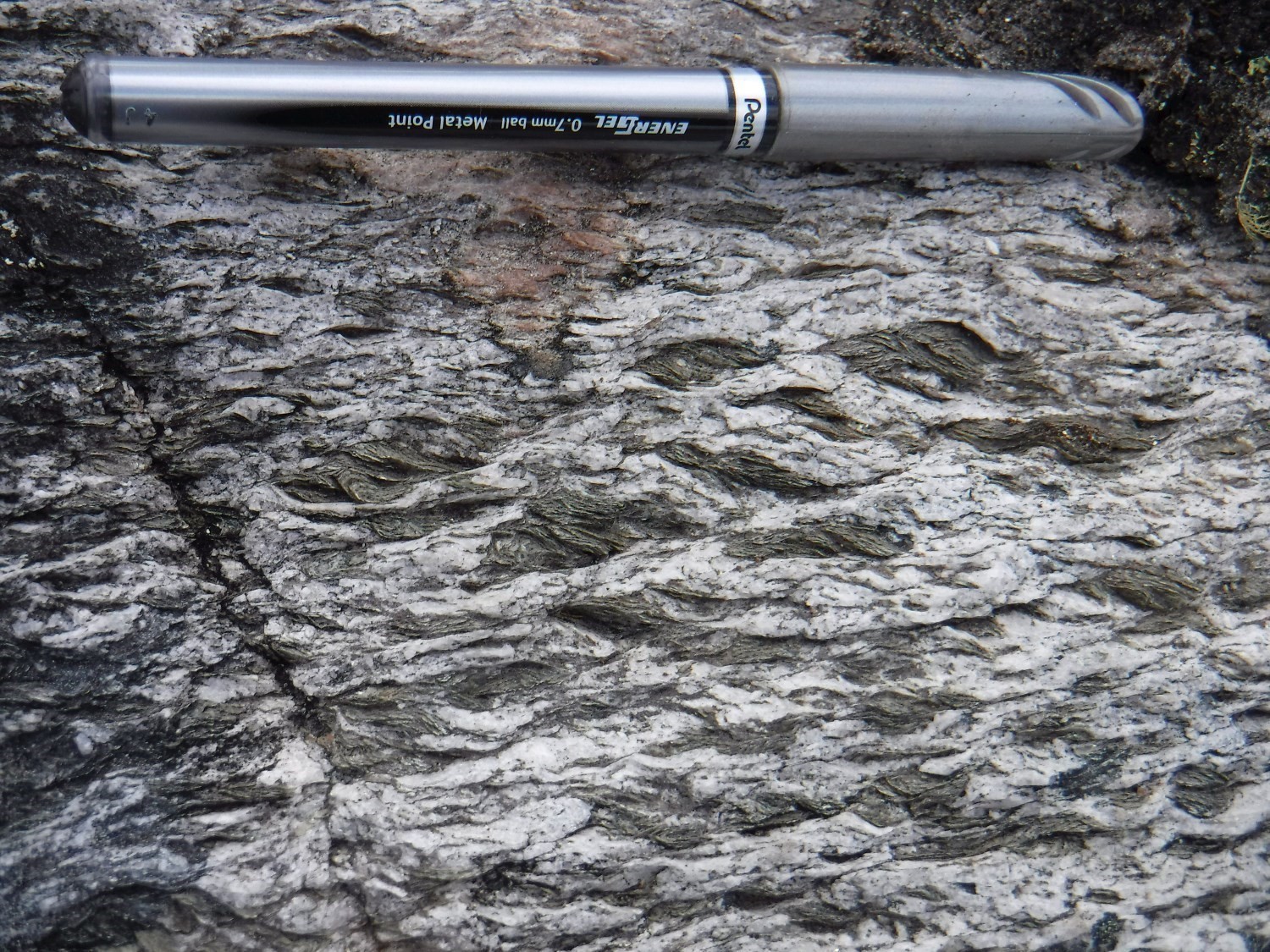 Unit nAgy2 includes metasedimentary rocks from the Grand Rosoy Suite that are more highly affected by metamorphism. It consists of coarser-grained lithologies where mineral segregation is observed. Micas are concentrated in millimetric to centimetric, discontinuous and undulating laminae that delineate quartzofeldspathic bands. These lithologies are locally rich in micas and have a schistose appearance. Muscovite then represents 15-35% of the rock mode, and biotite 1-10%. As with unit nApPgy1, banding is marked by colour variations (pinkish to greyish) and grain size (fine to medium). This banding locally corresponds to variations in K-feldspar content. In thin sections, grains of the quartzofeldspathic matrix are subhedral to anhedral and are little or not recrystallized. Anhedral quartz zones have an undulatory extinction. Muscovite forms large flakes concentrated in laminae associated with biotite and opaque minerals. Sparse accessory minerals include apatite, sphene, zoisite and zircon.

The Grand Rosoy Suite covers an area of ~544 km2 in the SW part of the Baleine Lithotectonic Domain. It forms regional folds with lithologies of the Curot and Akiasirviup suites. Unit nAgy2 paraschists and paragneiss (257 km2) are most prevalent in the extreme south of the domain (sheets 23I14, 23P03 and 23P06).

A muscovite meta-arkose sample contained detrital zircons aged between 2825 Ma and 2618 Ma (Davis and Sutcliffe, 2018). The 207Pb/206Pb age frequency histogram indicates the presence of two main detrital zircon populations at 2640 Ma and 2670 Ma, and two minor populations at 2714 Ma and 2779 Ma. A second sample from a similar lithology previously assigned to the Secondon Suite confirmed the presence of Archean zircons (and the absence of Paleoproterozoic zircons) in these metasedimentary rocks (Rayner et al., 2019), with a mode at 2690 Ma. Sediments would therefore have been deposited on Archean bedrock before building of the New Quebec Orogen (1.82-1.77 Ga).

This age distribution, which suggests that the detrital material originated solely from erosion of Archean rocks of the Baleine Lithotectonic Domain allowed Lafrance et al. (in preparation) to change the boundary between the Rachel-Laporte and Baleine domains. Units of the Secondon Suite located inside the Baleine Domain were also reassigned to the Grand Rosoy Suite.