The “Knox Gneiss” was introduced in the Bonaventure Lake area (Hammouche et al., 2011) to group orthopyroxene gneiss located on the western edge of the De Pas Supersuite. This unit includes informal units A5 and A1 of Danis (1988) and continues southward in Labrador (James et al., 1996; Valley et al., 2011). As part of a synthesis of the Southeastern Churchill Province (SECP), Lafrance et al. (in preparation) renamed this unit Knox Complex to comply with the North American Stratigraphic Code (NACSN, 2005) and also abandoned the Flat Point Gneiss and reassigned its lithologies to the Knox Complex.

The Knox Complex consists of three units: 1) felsic to intermediate gneiss (Agkx1); 2) diorite, gabbro and gabbronorite (Agkx2); and 3) tonalite and granodiorite (Agkx3). Rocks of this complex appear to include sedimentary and igneous rocks. 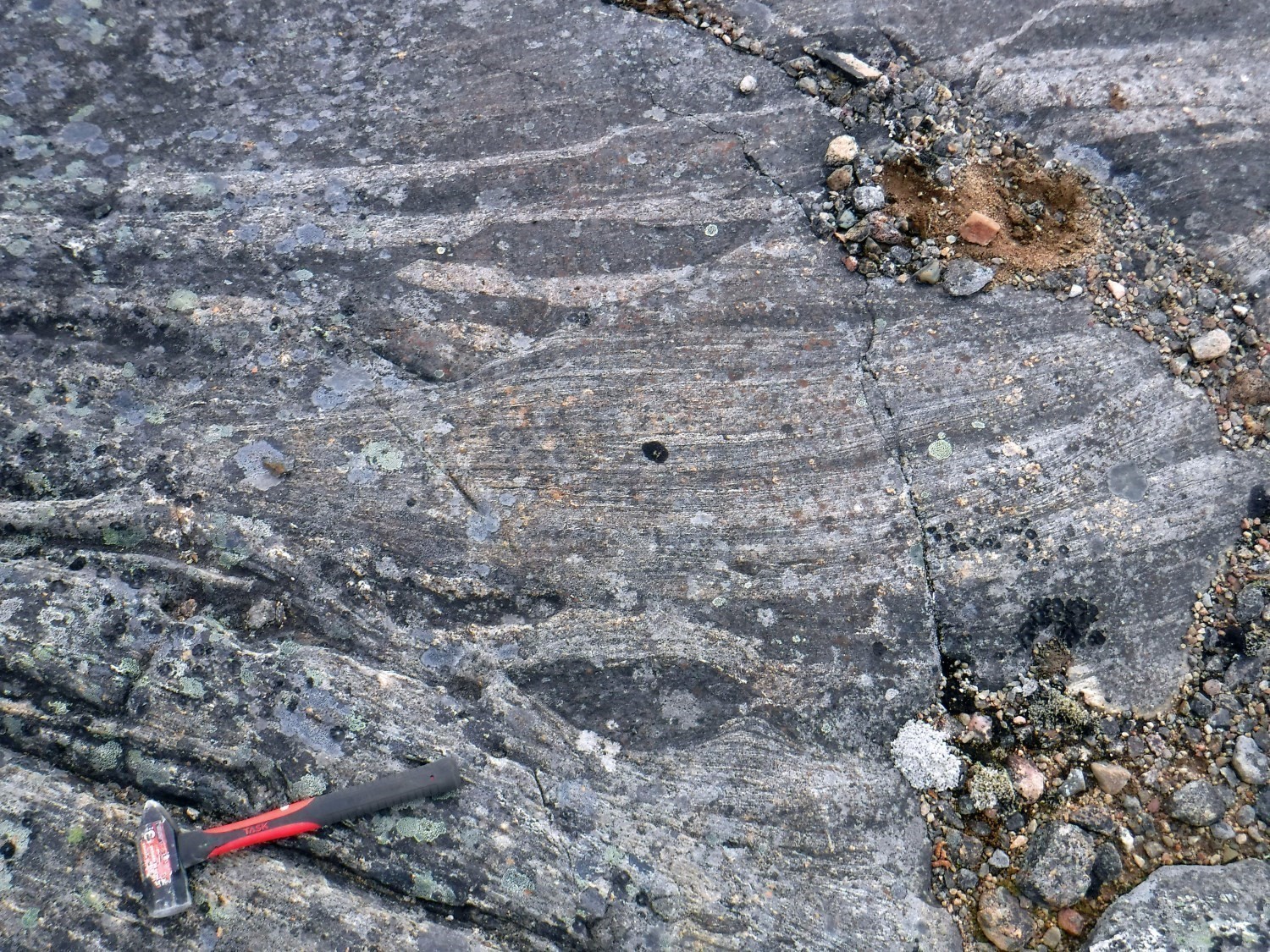 Gneiss of unit ApPgkx1 contains up to 15% centimetre to metre-wide layers and lenticular enclaves of gabbro, gabbronorite and diorite similar to those of unit ApPgkx2. James et al. (1996) suggest that these layers are relics of deformed and metamorphosed mafic dykes. Gneiss were divided into two subunits based on the presence (ApPgkx1a) or absence (ApPgkx1b) of orthopyroxene. 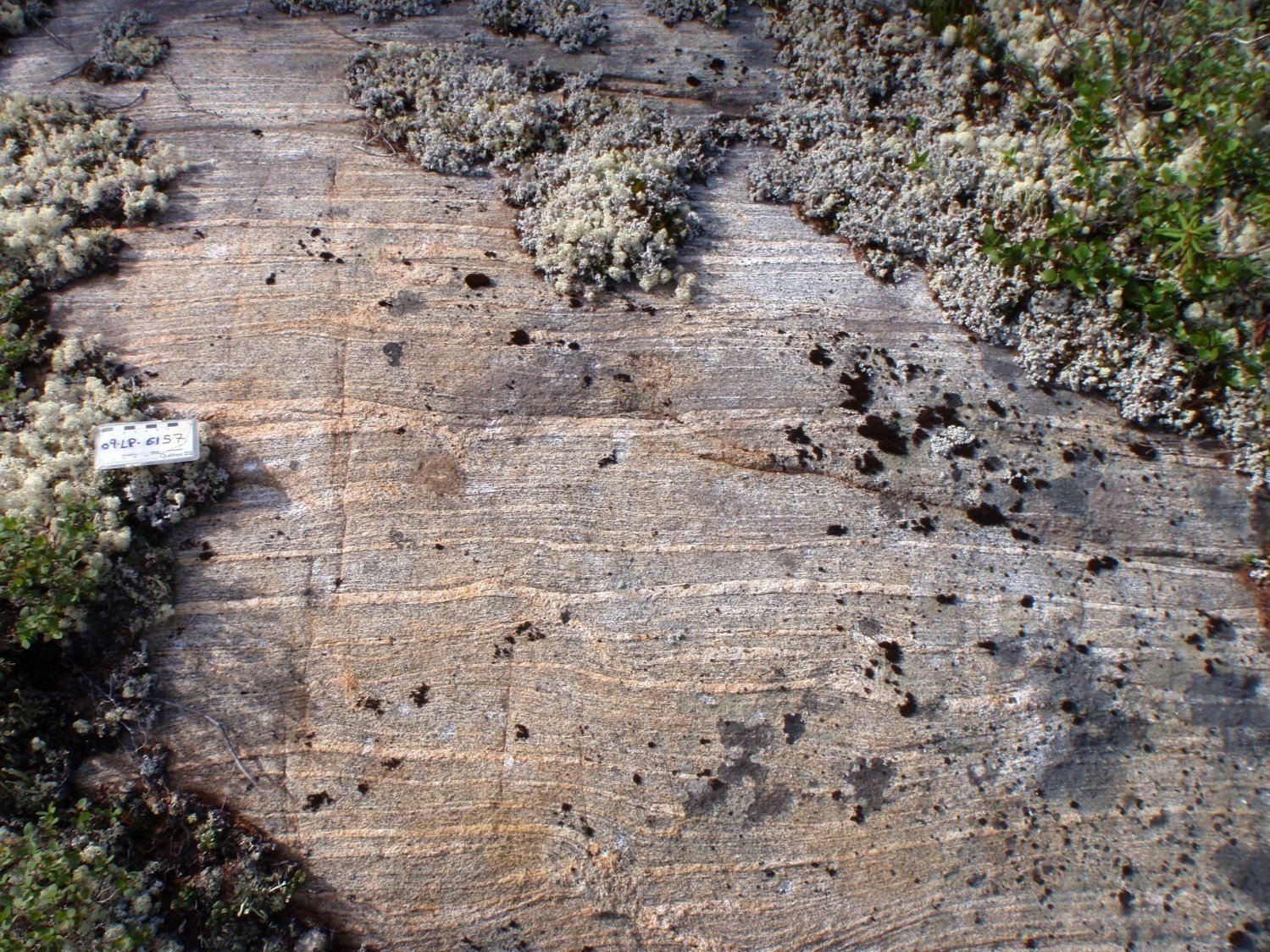 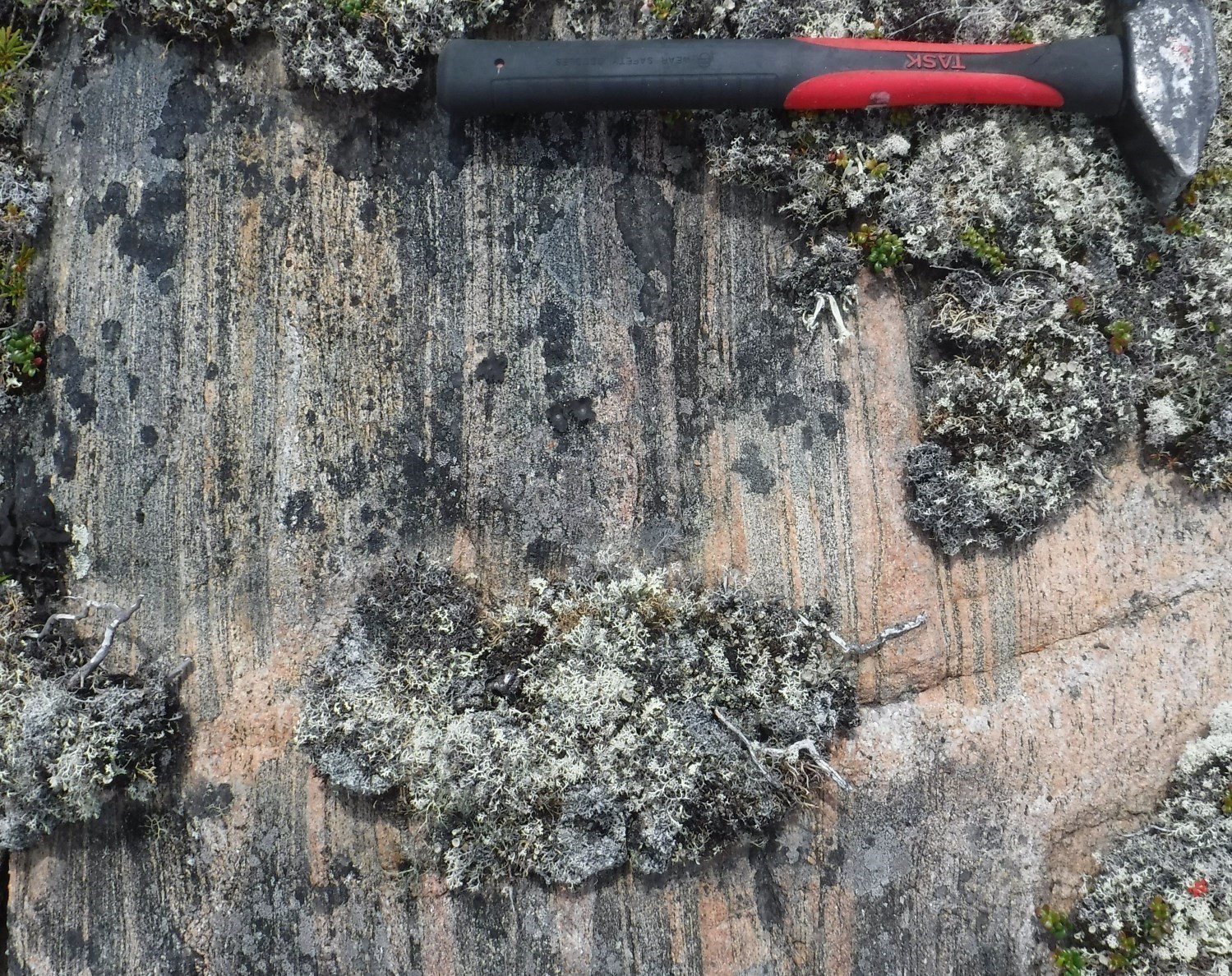 Granitic gneiss shows alternating millimetric to decimetric bands and layers of different composition, mainly enderbite or hypersthene quartz diorite, as well as jotunite, opdalite and farsundite, lighter in colour, greenish grey to brown sugar. Gneiss is foliated, fine to medium grained, partially recrystallized, has variable magnetism and shows stretching of quartz in millimetric bands. Slightly coarser-grained charnockite also forms centimetric to decimetric layers and bands subconformable to gneissosity, cutting it locally. Charnockite contains quartz rods and appears to have undergone the same deformation as gneiss, possibly representing pre-deformed injections. Gneiss contains 10-25% ferromagnesian minerals aligned along foliation and distributed homogeneously or concentrated in millimetric bands. They consist of orthopyroxene, clinopyroxene and brown to red biotite. Hypersthene can make up to 15% of the rock and form locally porphyroblasts that can reach 5 cm, moulded by finer crystals of biotite and hornblende. Accessory minerals are opaque minerals, sphene, apatite, garnet, chlorite, carbonate and zircon. In thin sections, quartz exhibits undulatory extinction, and intergrowth is common between biotite and quartz, especially at the edges of orthopyroxene and garnet. Hypersthene is regularly serpentinized and hematite is observed as alteration in thin surface fractures. When present, garnet forms millimetric, euhedral or fractured grains, indicating that it is late kinematic to post-kinematic. 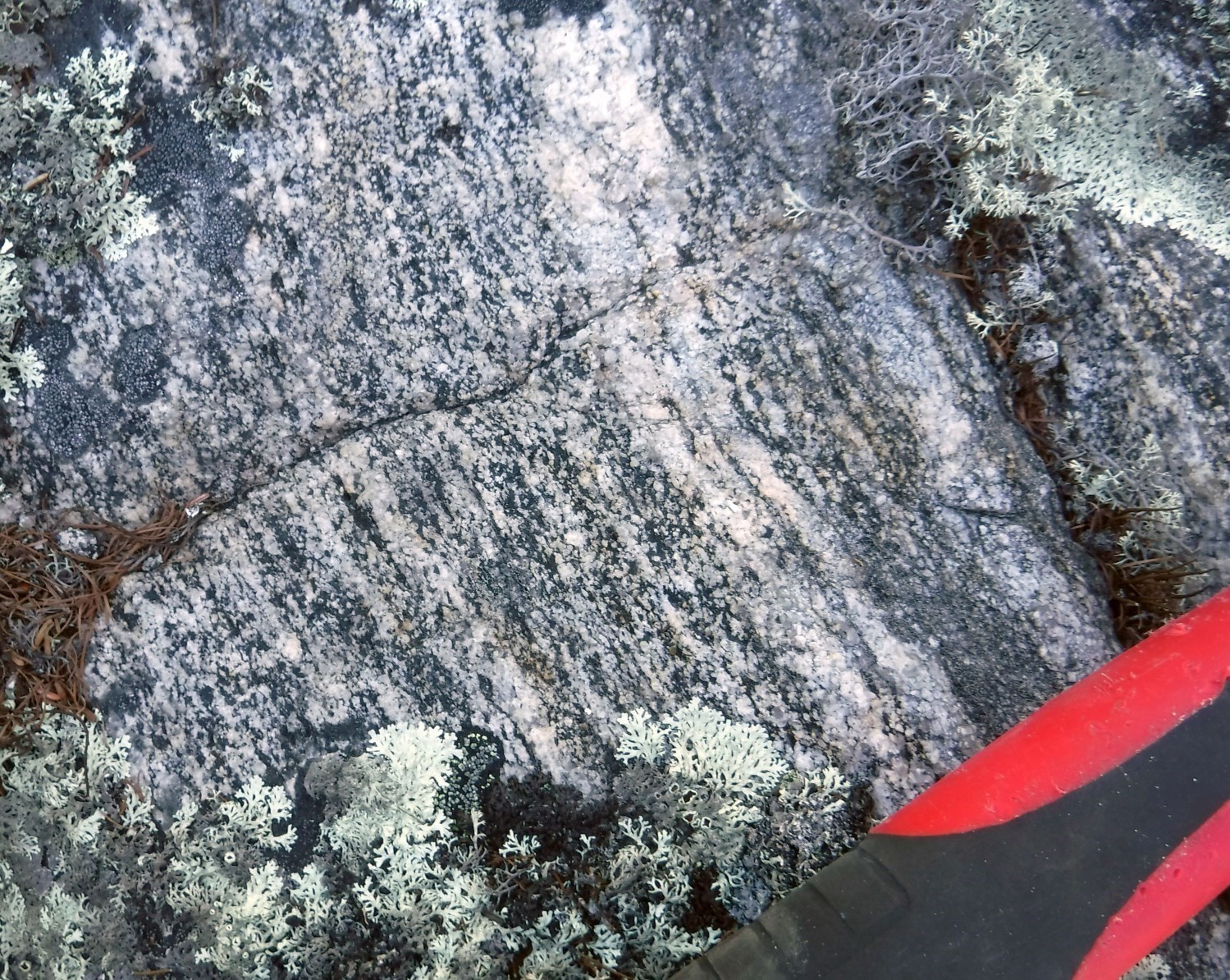 Subunit Agkx1b consists mainly of tonalitic to quartz dioritic gneiss and locally granitic gneiss. Gneiss is variably migmatized and the leucosome appears to be mostly granitic. This subunit was previously assigned to the Flat Point Gneiss, now abandoned. Tonalitic gneiss is the dominant lithology. It shows regularly alternating centimetric light grey quartzofeldspathic bands and millimetric black biotite laminae. This gneiss is fine to medium grained and contains 15-20% ferromagnesian minerals consisting of hornblende and biotite, which regularly form millimetric to centimetric clusters. Clinopyroxene is also locally observed in small amounts, as well as orthopyroxene relics in the core of hornblende. Quartz ranges from 12% to 25% while K-feldspar is sparse (<5%). In thin sections, rocks of this unit show partial recrystallization, with large quartz zones having undulatory extinction and slight plagioclase saussuritization. Sphene, chlorite, opaque minerals, apatite, garnet, zircon and tourmaline are accessory minerals. Granitic gneiss differs from tonalitic gneiss only by a greater proportion of K-feldspar in light bands. Locally, gneiss is mylonitized and contains quartz in lenses and bands.

Like unit Agkx1, unit Agkx2 unit is divided according to the presence (Agkx2a) or absence (Agkx2b) of orthopyroxene in the rock. 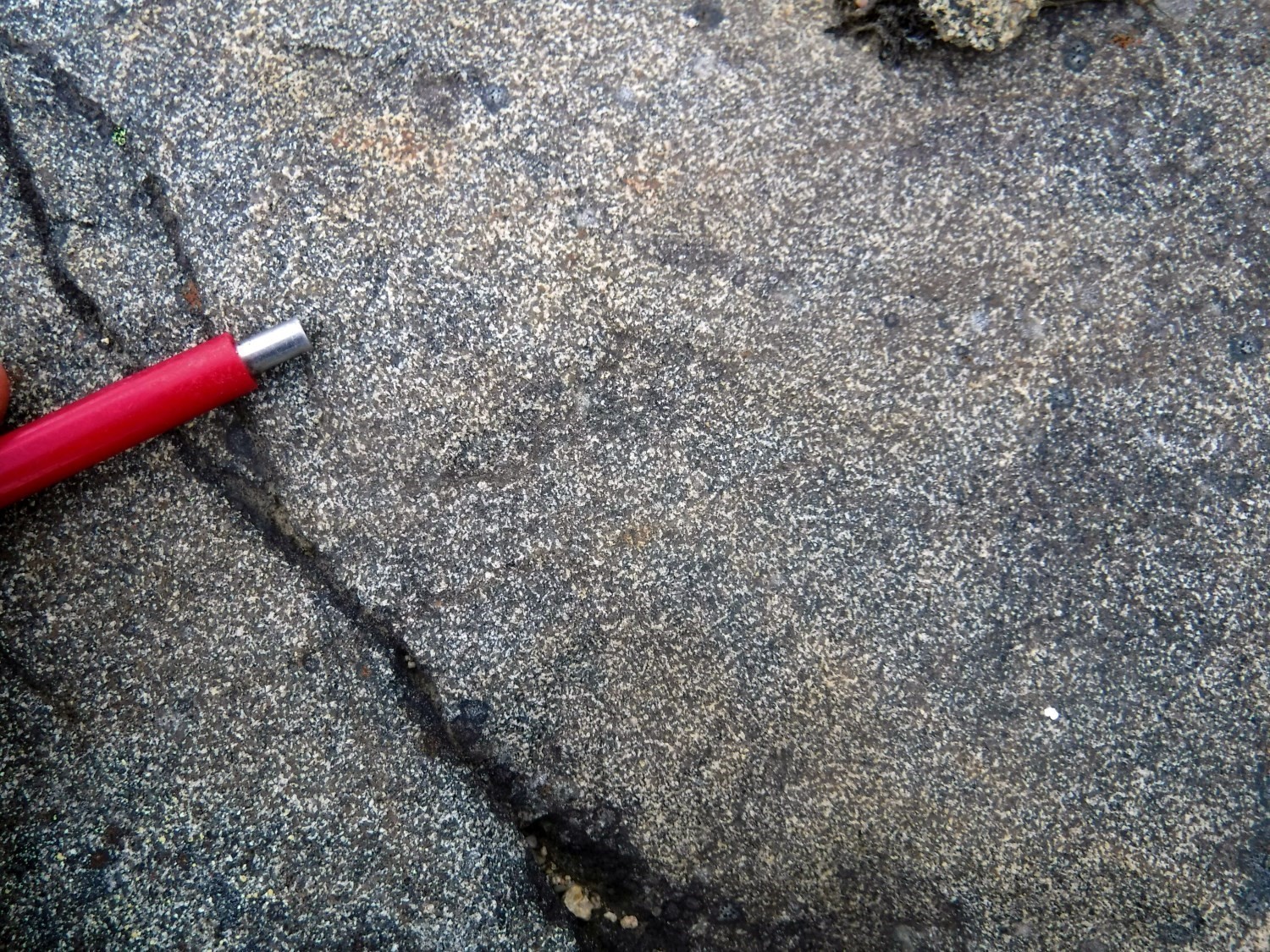 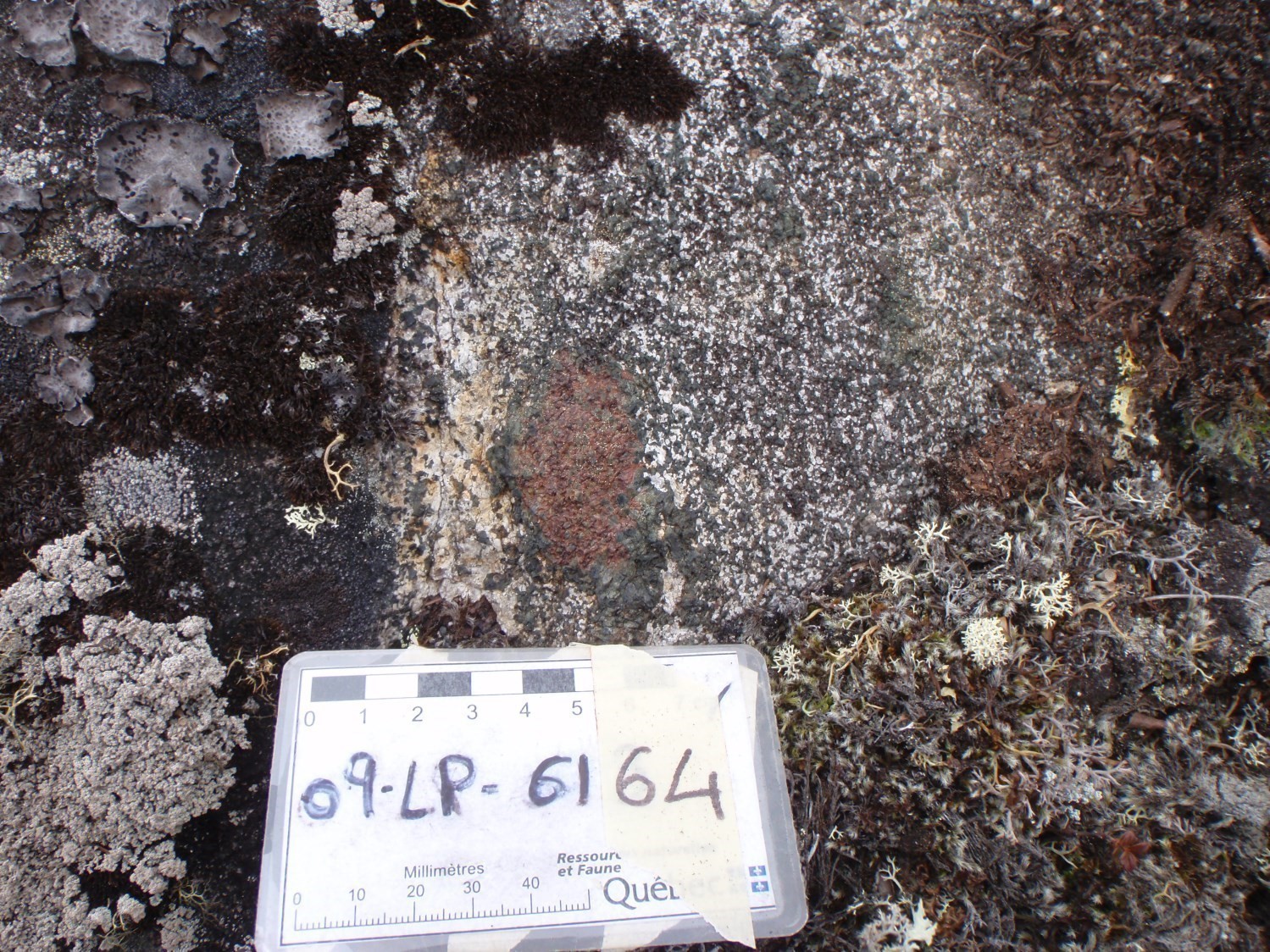 Subunit Agkx2b is similar to subunit Agkx2a, except that it does not contain orthopyroxene or only a few heavily altered relics. The rock is dark green, massive, granoblastic, even grained and fine grained. It contains >60% amphibole, some uralitized clinopyroxene, quartz (<10%), biotite, epidote and opaque minerals. 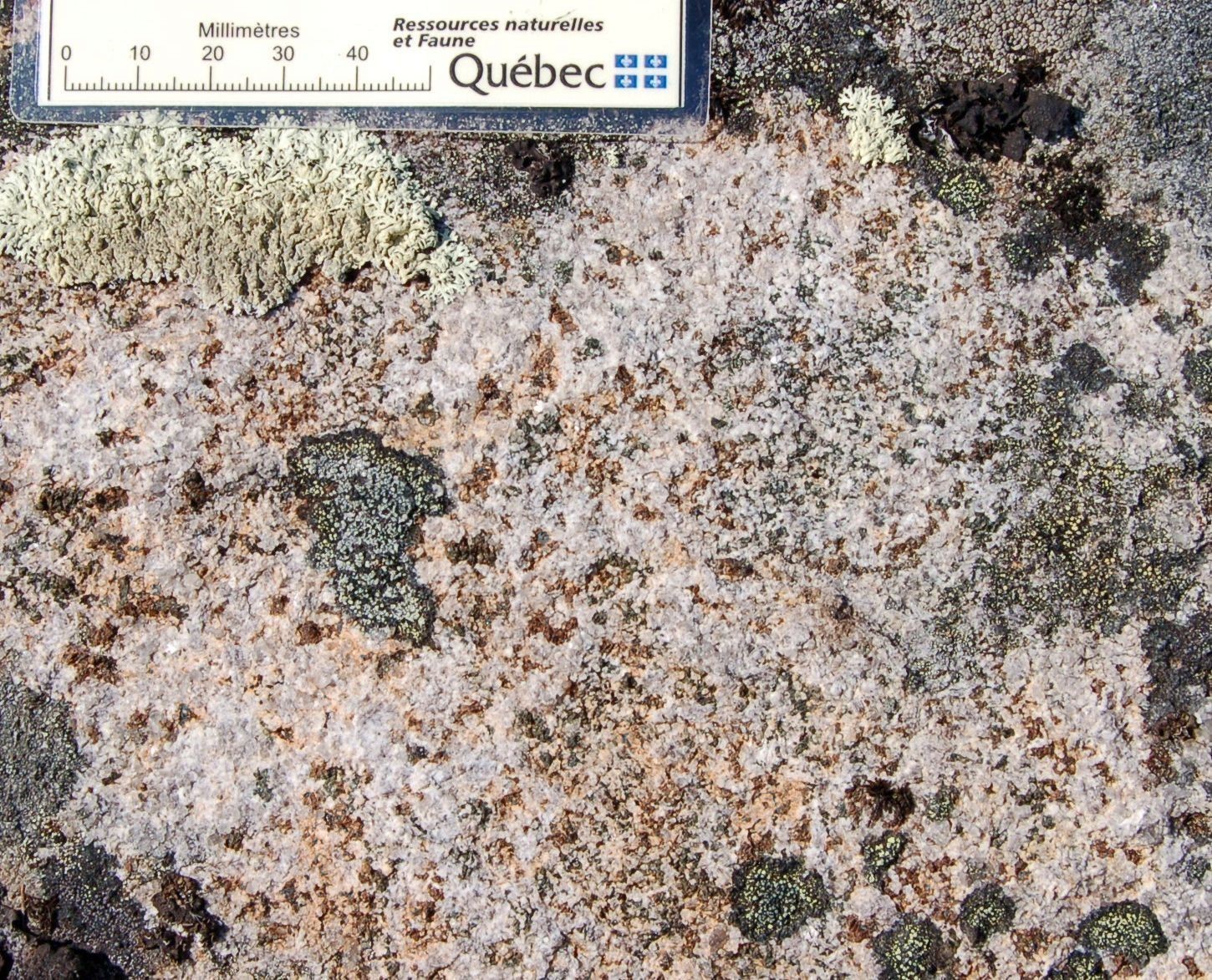 Rocks of subunit Agkx3a consists mostly of enderbite and opdalite, but also include charnockite and mangerite. They are white to beige-grey in altered surface and greenish or brownish in fresh exposure. They are medium to coarse grained and highly to weakly foliated. Intrusions contain 5-25% ferromagnesian minerals represented by orthopyroxene, biotite, clinopyroxene and hornblende. They also contain lower amounts of magnetite, epidote and hematite. 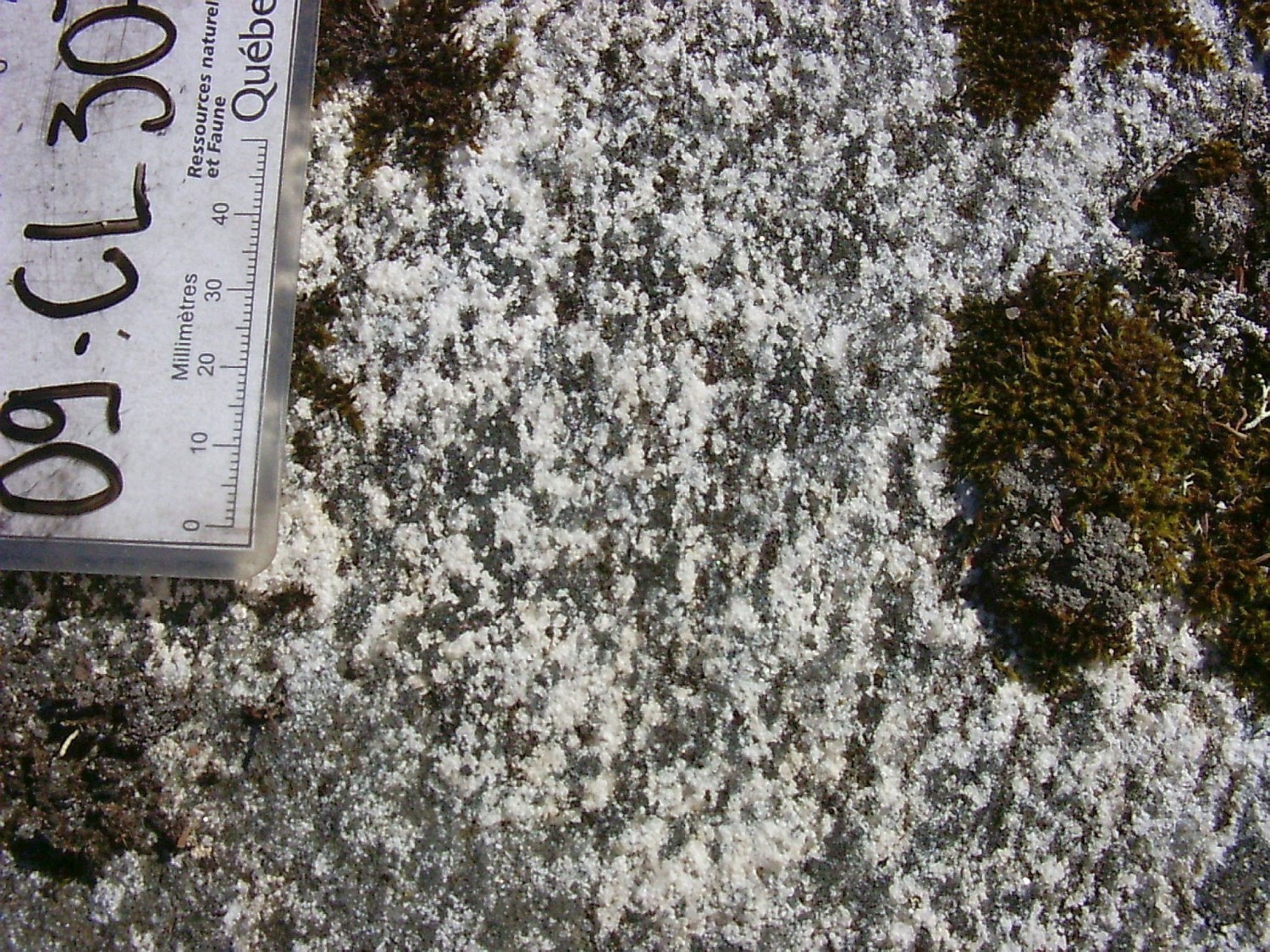 Intrusions of similar composition and appearance, but not containing orthopyroxene, were grouped in subunit Agkx3b. These intrusions are also distinguished by a white to grey fresh surface. With the exception of orthopyroxene, which is absent or only in relics, ferromagnesian minerals (10-25%) are the same as those of subunit Agkx3a.

The Knox Complex forms an N-S oriented strip ~1062 km2 in the SE portion of the Baleine Lithotectonic Domain. This 2-7 km-wide strip is followed in Quebec over 150 km long and extends southward in Labrador. Subunits Agkx1a (612 km2) and Agkx1b (389 km2) are the most important, while units Agkx2 (16 km2) and Agkx3 (47 km2) cover much smaller areas. Orthopyroxene gneiss (Agkx1a) is associated with an aeromagnetic signature consisting of alternating magnetic ridges at the hectometric to kilometric scale. These ridges, which delineate straight lines and the aeromagnetic signature, helped define the boundaries of the Knox Complex. Orthopyroxene-free gneiss (Agkx1b) rather have low magnetic susceptibility.

The spread of Archean ages obtained in unit Agkx1 gneiss (3123-2823 Ma) suggests a sedimentary protolith (Davis and Sutcliffe, 2018). The age of 2684 Ma obtained in a granitic gneiss in the Bonaventure Lake area (Hammouche et al., 2011) shows that this unit contains several Archean units of different ages and compositions.

Hammouche et al. (2011) also collected a sample of gneissic and mylonitic opdalite in the western border of the De Pas Charnockitic Suite. In this area, outcrops are deformed and similar to those assigned to the Knox Complex. The age of 1837.3 ±4.5 Ma (David et al., 2011) obtained in this sample slightly moved the De Pas boundary westward. It is therefore possible that part of the Knox Complex represents a highly deformed edge of the De Pas.

The eastern portion of the Knox Complex is interstratified with rocks of the De Pas Charnockitic Suite. The contact between the two is disturbed by the presence of the Lac Tudor Shear Zone, which affects both units in this area. The exact limit between these units is therefore approximate. Near the western edge of the De Pas Supersuite, rocks of unit Agkx2 frequently occurs as enclaves in the De Pas Charnockitic Suite. In Labrador, in the south extension of the Knox Complex, Valley (2011) interprets subunit Agkx1a as part of the Pas Supersuite. However, the data indicate the importance of the Archean component of the Knox Complex. To the west, the Knox Complex is interpreted as being in contact with metasedimentary rocks of Grand Rosoy Suite. Decametric layers of False Suite paragneiss have also been observed in Knox Complex subunit Agkx1b.