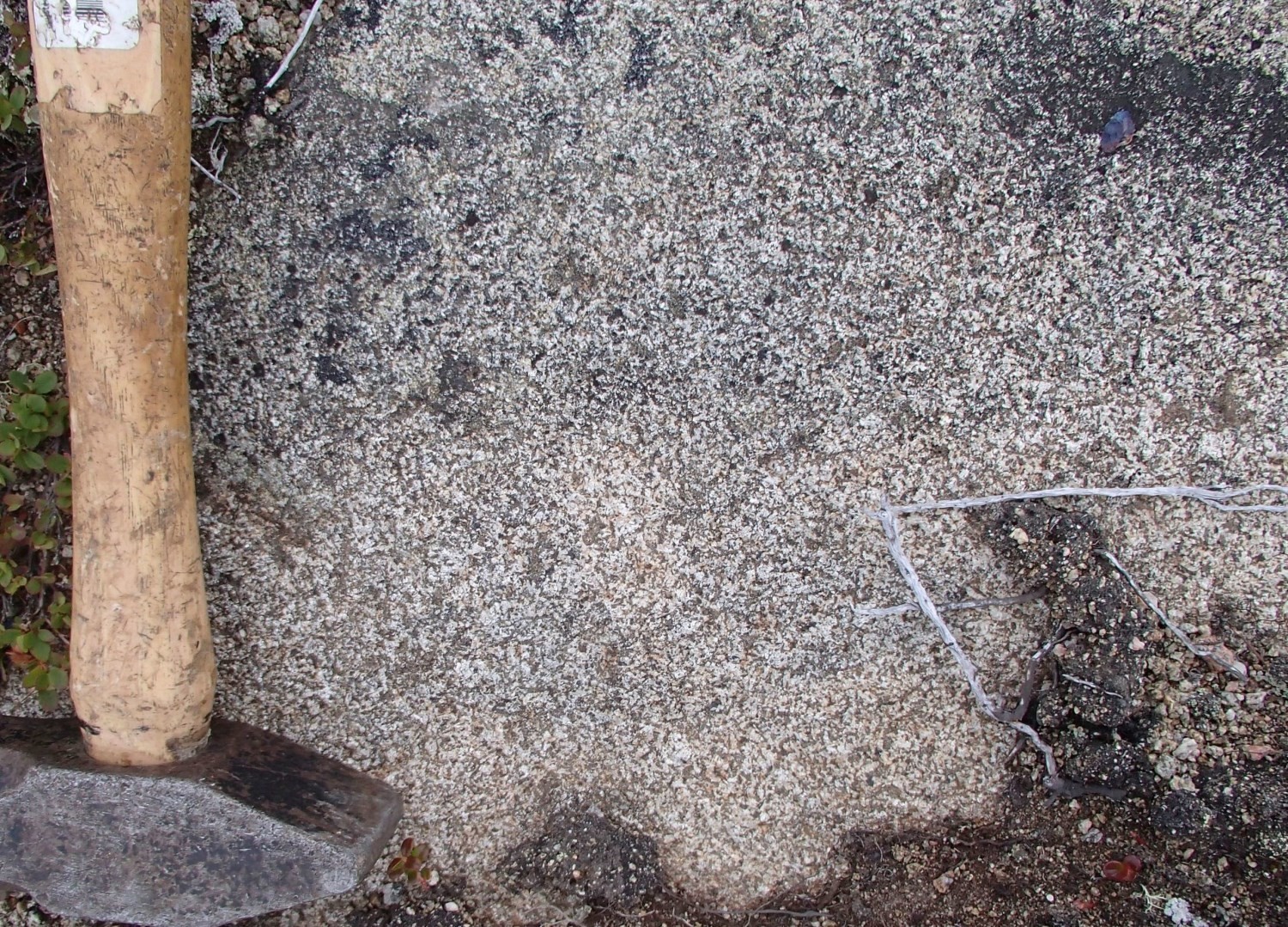 The Falcoz Swarm consists of subophitic olivine gabbro, not deformed and not metamorphosed. It also includes some gabbro, gabbronorite, olivine norite and troctolite outcrops. Olivine gabbro is fine grained and is composed of weakly to moderately sericitized plagioclase laths, 30 to 40% mafic minerals, including a majority of olivine and clinopyroxene as well as magnetite (2-5%). Biotite and apatite are accessory minerals. Locally, the matrix is aphanitic (plagioclase and clinopyroxene) and includes plagioclase and olivine microphenocrystals. Alteration is very weak on the rim of clinopyroxene.

In the western Narsajuaq Arc (NTS sheet 35K) and in Grenfeld Sound (sheet 25A) and Pointe Le Droit (sheet 24P) areas, the composition is distinguished from the rest of the Churchill Province by the presence of orthopyroxene. Olivine gabbronorite is also massive, with a subophitic texture.

The tracks of the 65 Falcoz Swarm dykes were interpreted primarily from aeromagnetic survey. However, dykes of metric to decametric width were observed at a few locations along these lineaments. Magnetic lineaments are generally a few hundred metres wide and can be tracked over long distances, up to more than 60 km. Falcoz Swarm dykes are predominantly concentrated in the Falcoz Lithotectonic Domain (39 dykes), but have also been observed in the Mistinibi-Raude (11 dykes; Lafrance et al., 2018), Burwell (7 dykes), Baleine (6 dykes), Rachel-Laporte (1 Dyke) and George (1 Dyke; Charette et al., 2018) domains.

The Falcoz Swarm has not been dated.

In Pointe Le Droit (sheet 24P), veins of pseudotachylite cut dykes. Pseudotachylite may be associated with either the opening of the Iapetus Ocean (600 Ma) or the opening of the Atlantic Ocean (200 Ma). In the same area, Falcoz Swarm dykes intrude into the Abloviak Shear Zone, dated 1843 Ma (Bertrand et al., 1993). The Mesoproterozoic age is based on dating a sample of Slippery Dykes to 1269 Ma (Corrigan et al., 2015). This suite also consists of massive olivine gabbro similar to that of the Falcoz Swarm.

The Falcoz Swarm represents a package of late dykes, highly magnetic, not deformed and not metamorphosed, that cut all units of the Churchill and Nain provinces. Geophysics shows that these dykes do not cut the Blumath Deformation Shear Zone, which separates the western and eastern parts of the Falcoz Lithotectonic Domain, although they are on both sides. In the western portion of the Narsajuaq Arc, the dykes also cut all the units present.

Girard (1990) noted that these dykes have similarities to the “Ministuku Diabases” identified by van der Leeden (1994) further south on the shores of Ntshuku Ministuku Lake. Small in size (<1 m), these dykes were not plotted on the geological map by van der Leeden. They include approximately 50 NW-SE oriented gabbro dykes, black and fine to medium-grained.