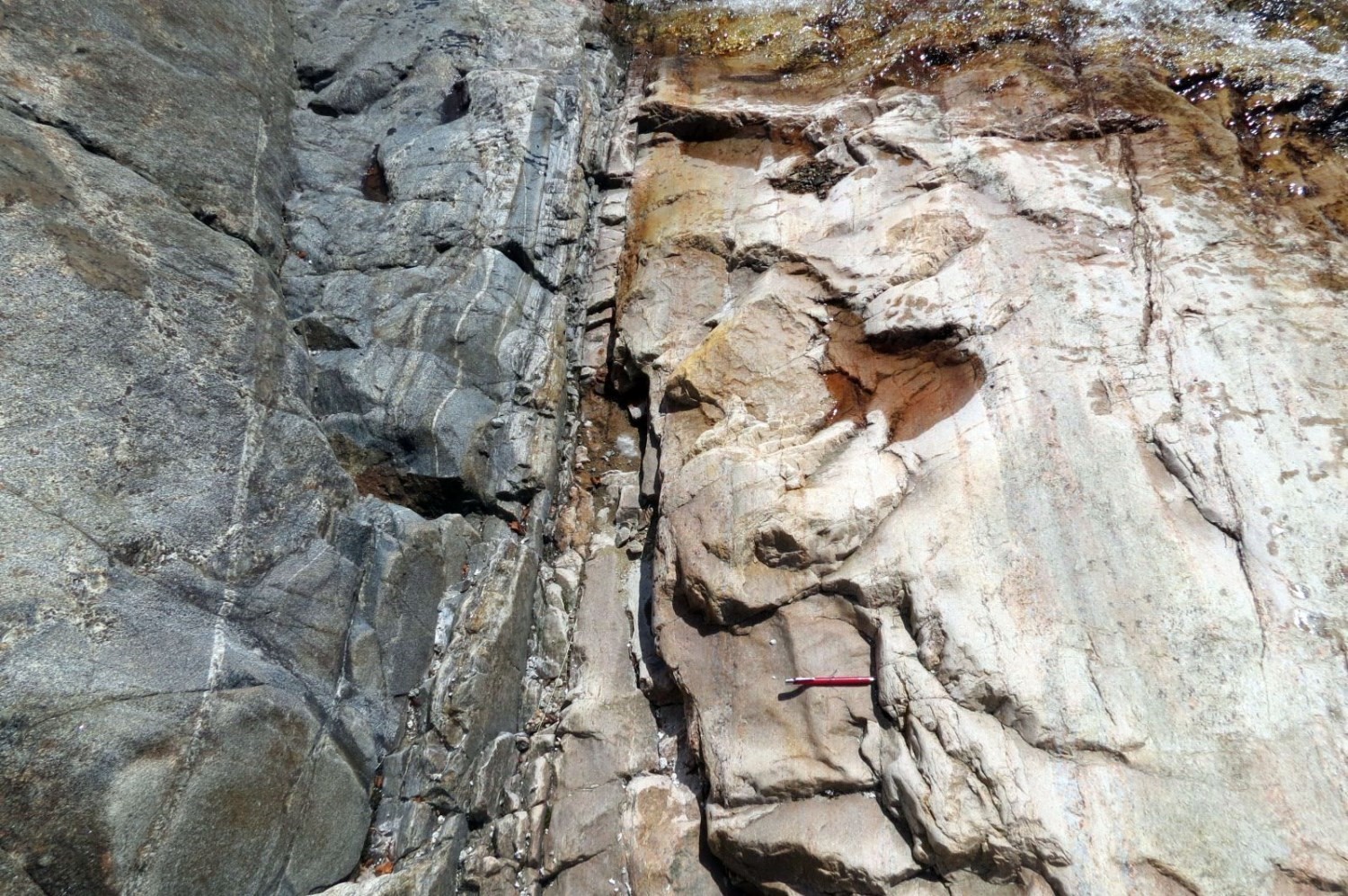 The Courdon Intrusive Suite, which is pre-tectonic, forms kilometric tabular massifs with relatively homogeneous cores. It becomes more heterogeneous away from the centre, showing alternating metric to decametric horizons of different composition and grain size. The most deformed areas were assigned by Girard (1990) to the gneiss units of the Lomier Complex (pPlom). With the exception of the pPcou1 amphibolitized pyroxenite, rocks of the Courdon Intrusive suite show good foliation and/or lineation characterized by the presence of quartz rods or bands, general alignment of all mineral phases, undulatory extinction, granulation along grain edges, deformation of twins within the largest plagioclases and the presence of finer-grained corridors.

There are few ultramafic rocks, which form a small hectometric massif within a kilometric synform, and two late intrusions a few kilometres long in sheet 14E12 (Girard, 1990). Rocks are black metapyroxenites, holomelanocratic and medium to coarse grained. They are largely composed of light green magnetic hornblende (50-70%), which replaces augite (15-25%) and bronzite (5-10%) with interstitial phases of epidote, ilmenite, magnetite and sulphides. Hornblende forms 4 to 6 mm euhedral porphyroblasts and locally preserves relics of pyroxenes. This amphibole is poorly affected by deformation and grows according to regional lineation. Pyroxenes have a granular habit, are zoned and contain hematite exsolution laminae. They are affected by deformation, which produces granulation and budding of grain edges. Inclusions of other primary minerals are observed. Olivine relics are interstitial.

Mafic rocks of unit pPcou2 form a few massifs less than a kilometre wide, elongated in the tectonic grain, for a few kilometres long. They are also found in metric to decametric horizons interbedded within other units of the Lomier Complex. The main composition is a gabbronorite, although gabbro and norite have been recognized in places. Gabbronorite is medium to fine grained, homogeneous and dark grey with a greenish or brownish shade. It forms raised outcrops and is often intruded by granite or charnockite centimetric to decimetric dykes. The recrystallization may be partial, with relics of intrusive textures, or complete (granoblastic). 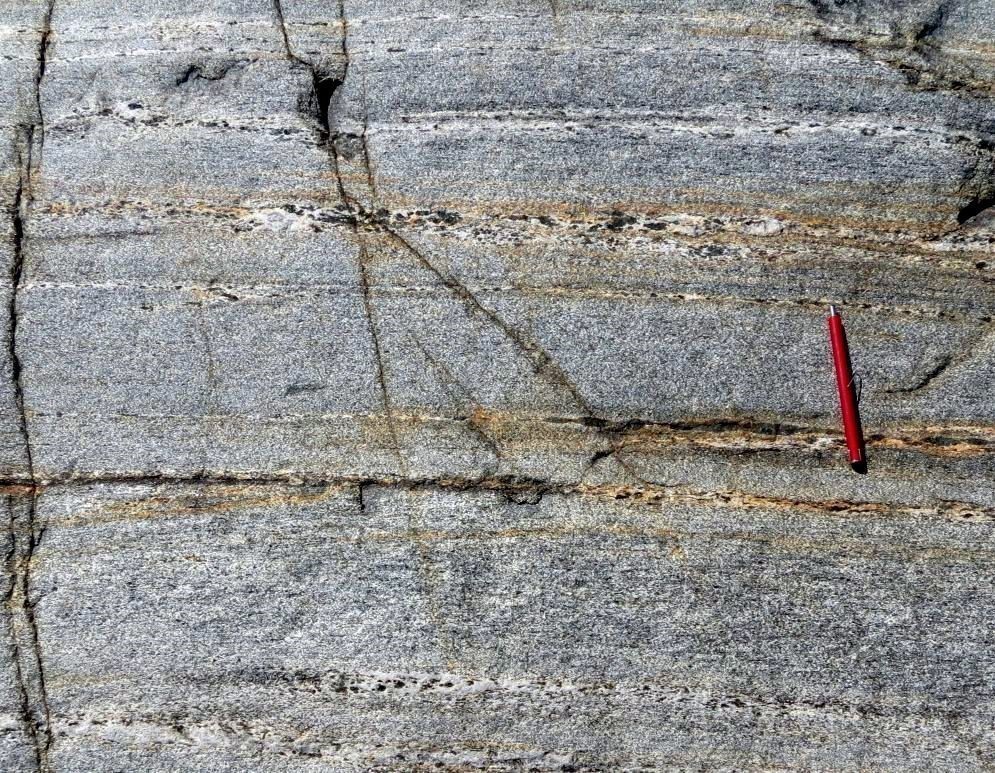 On a few outcrops, mafic rocks are brecciated and have been assigned to subunit pPcou2a. 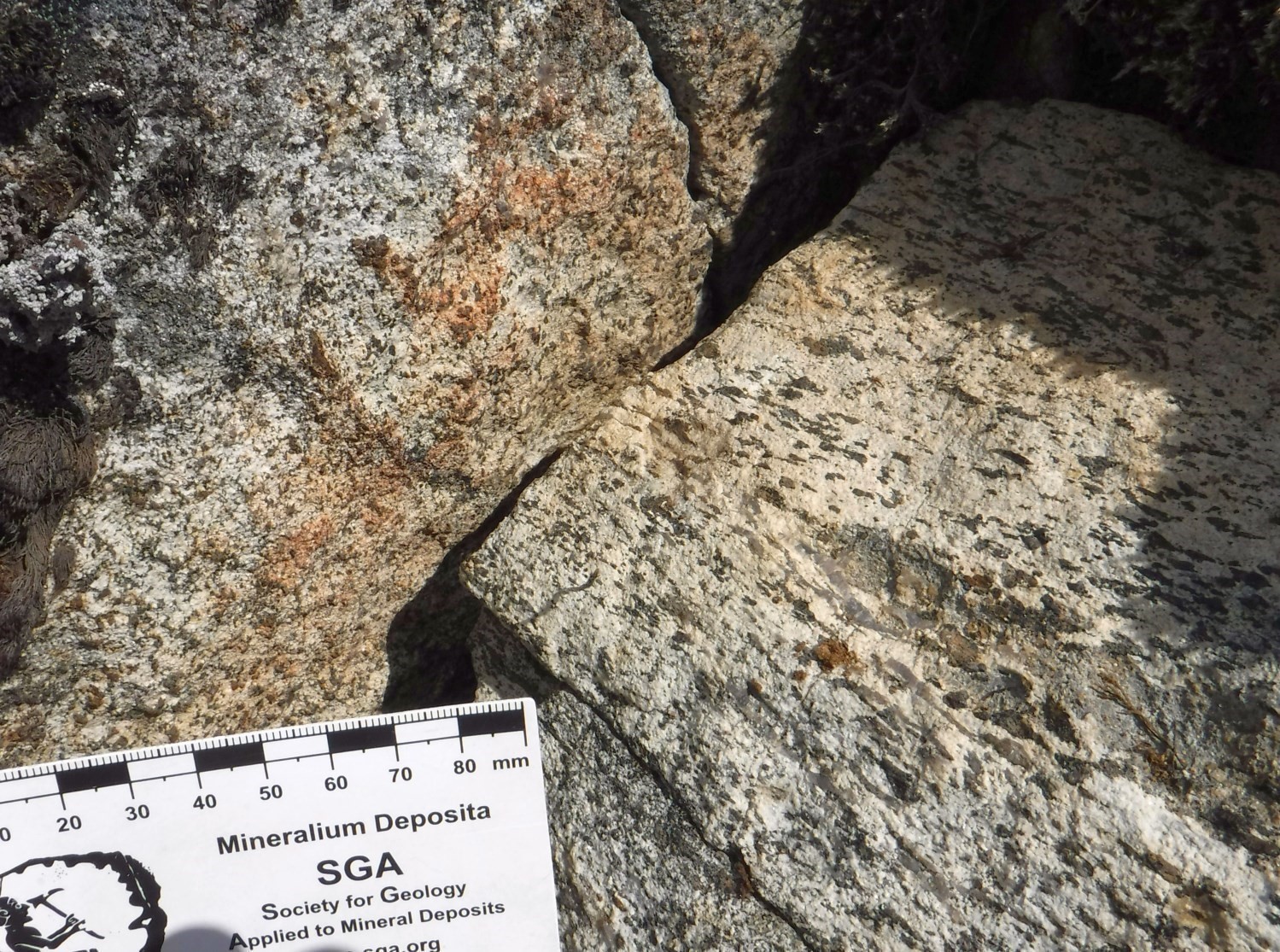 Unit pPcou3 was only observed in the Koroc River and Hébron area (Verpaelst et al., 2000). The rock is fine to medium grained, white-beige, black speckled, foliated and/or lineated, locally mylonitized. It is composed of granoblastic plagioclase, 7-20% mafic mineral clusters and 1-8% quartz. Mafic minerals are dominated by orthopyroxene and clinopyroxene. They are locally more strongly uralitized with green hornblende rims and cores replaced by an actinolite and serpentine mix. The main accessory minerals are biotite, zircon, apatite, magnetite and sulphides. More locally, garnet, carbonate, sphene, epidote and chlorite were observed. Fine K-feldspar crystals, either as exsolution or interstitial, are also common.

Rocks of unit ApPcou3 are generally granoblastic, with plagioclase largely polygonized but primary porphyroclasts still recognizable. Pyroxenes are distributed in laminae of polygonal crystals accompanied by a few porphyroclasts. Garnet is poikiloblastic or in small grains. In a few thin sections, part of the plagioclase is transformed into scapolite, indicating late hydrothermal alteration of these rocks. Orthopyroxene is not altered to weakly transformed into iddingsite, primarily at grain edges and in fractures.

Metric to decametric bands of garnetite were described by Verpaelst et al. (2000) within anorthosites. These consist of highly poikilitic garnet with inclusions of deformed quartz, magnetite, zircon and diopside. Accessory minerals include apatite, magnetite and zircon. 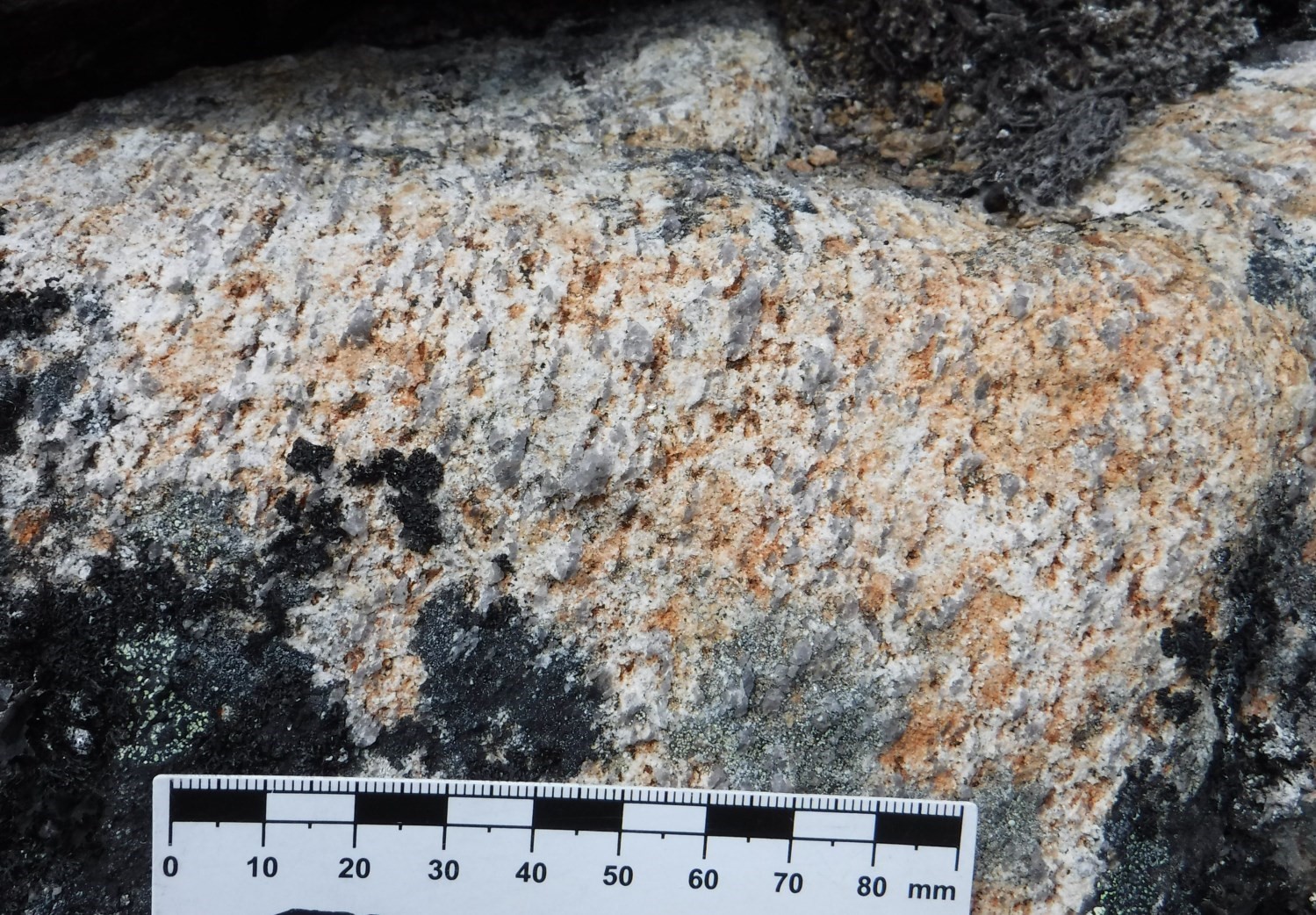 Hypersthene intrusive rocks of unit pPcou4 are dominated by enderbite with, in smaller proportions, quartz diorite and opdalite. They form metric to kilometric massifs or horizons in the Lomier Complex. They are greenish brown in fresh exposure with a white-beige alteration patina. They are medium grained (1-3 mm) and contain between 5 and 15% mafic minerals. These consist of brown biotite, hypersthene and, in places, hornblende and clinopyroxene. It has a slightly migmatitic appearance from veinlets and diffuse centimetric zones of greenish pegmatoids of the same composition. The origin of this texture is likely a dynamic recrystallization.

Enderbite contains equivalent proportions of quartz and dark green plagioclase and shows relics of a granoblastic texture granulated by deformation. Except in opdalite, K-feldspar (<2%) is limited to antiperthites, scarce myrmekites or interstitial fine crystals. Hypstehene, as well as scarce grains of augite, has a granoblastic texture with quartzofeldspathic minerals. It is commonly corroded and granulated in the stretching lineation. In this case, pyroxene is replaced by subgranoblastic green hornblende or by iddingsite. Idioblastic brown biotite and magnetite (<3%) are common. Apatite (<1%), zircon, epidote, muscovite and chlorite are the secondary phases observed in thin section.

Opdalite is distinguished from inderbite by a porphyroclastic texture with perthitic feldspars and a slightly smaller proportion of mafic minerals (<10%). 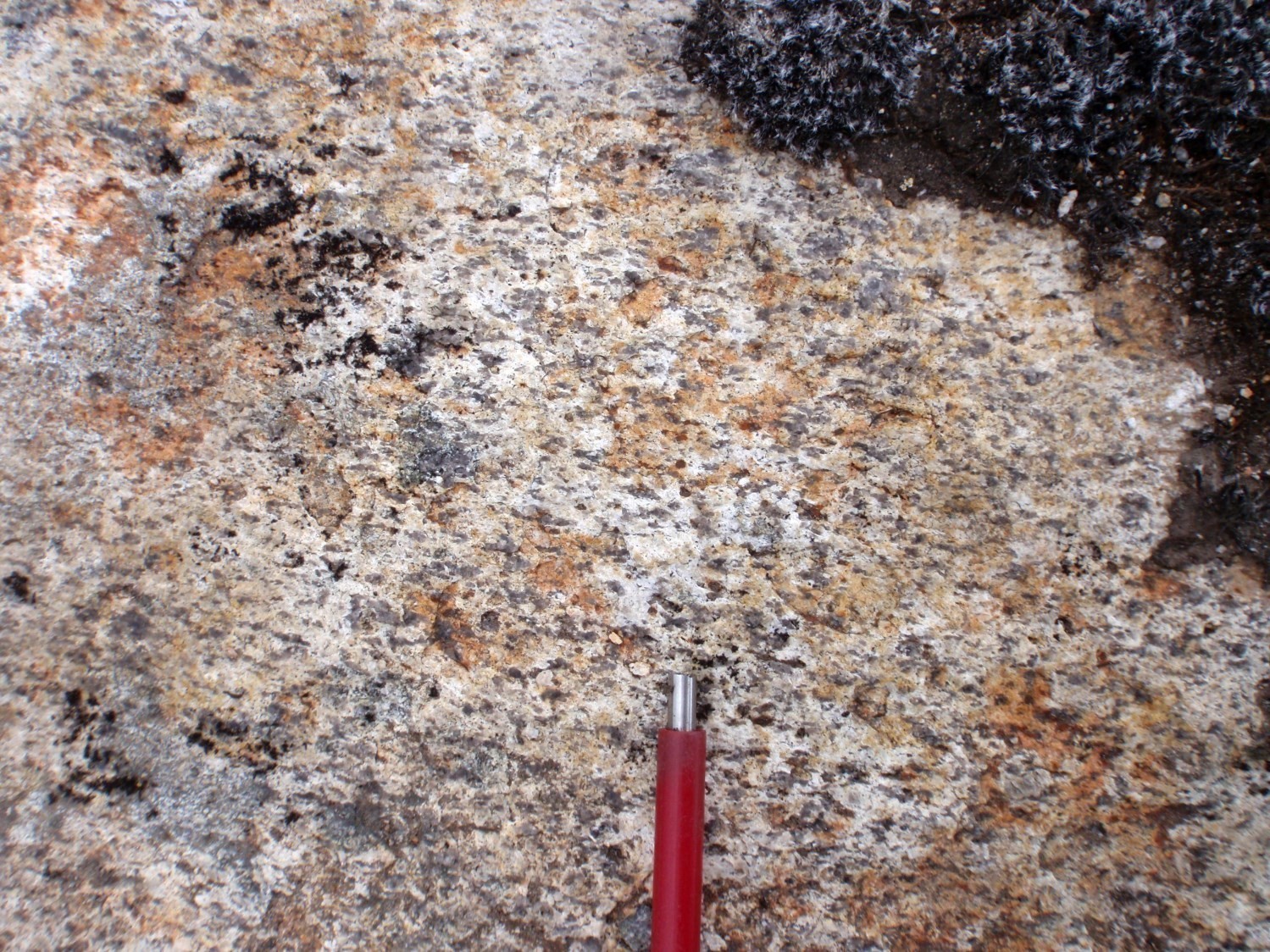 Charnockite is brown sugar coloured, medium to fine grained and homogeneous in appearance. It contains about 25% quartz, 45% microcline and less than 5% mafic minerals, which consist of orthopyroxene, magnetite and biotite. K-feldspar is found in small light pink lenticular phenocrystals 4 to 8 mm long but is also present in the matrix. It is often perthitic. Orthopyroxene is variably replaced by iddingsite. In some areas, charnockite is retrograded to pink granite with orthopyroxene relics completely replaced by iddingsite. These outcrops were assigned to subunit pPcou5a. This granite is locally hematitized and distinguished from charnockite by an even smaller proportion of mafic minerals (1%). 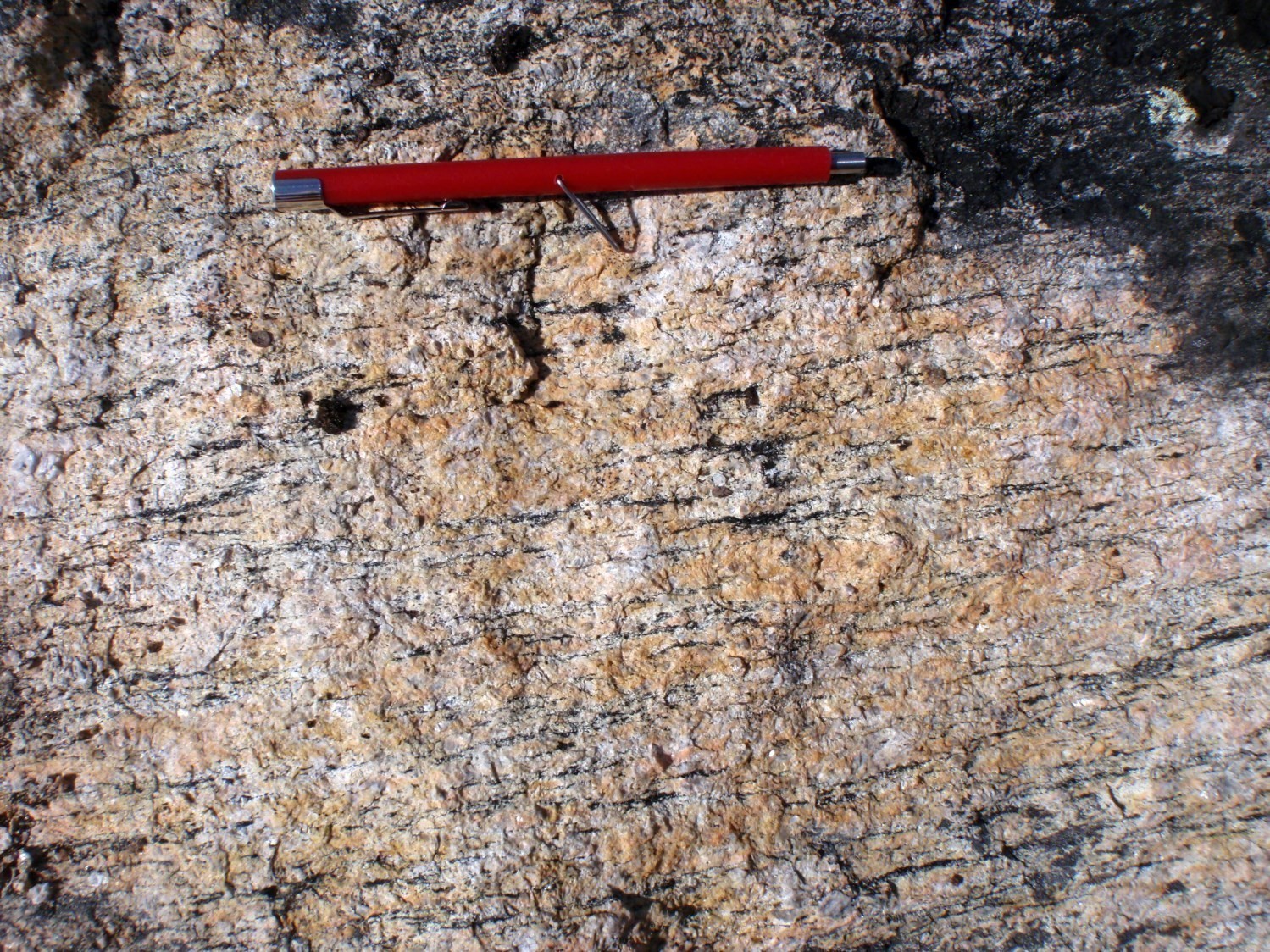 Quartz syenite is homogeneous, greenish and changes from medium to fine-grained more or less gradually. It contains 5 to 10% small anhedral quartz lenses with undulatory extinction and 10 to 15% mafic minerals. These, represented by green hornblende, orthopyroxene and brown biotite, tend to form centimetric clusters. Accessory minerals are quite numerous and consist of magnetite (1-2%), apatite, zircon, allanite and epidote. Plagioclase is observed on grain edges only. K-feldspar is rich in thin and undulatory perthites. Orthopyroxene is replaced by iddingsite or hornblende.

The Courdon Intrusive Suite forms elongated intrusions, hectometre to decakilometre wide inside the Lomier Complex. The latter forms a 10 to 15 km wide N-S strip spanning more than 200 km long along the Quebec-Labrador border. It is limited by the Lac Pilliamet Shear Zone (LPSZ) to the west and the Abloviak Shear Zone (ASZ) to the east. The pPcou3 enderbite unit covers the largest area.

The Courdon Intrusive Suite is part of the Lomier Complex, with an enderbitic gneiss dated to approximately 1877 Ma (Bertrand et al., 1993).

Transitional and diffuse contact between the Courdon Intrusive Suite and the Lomier Complex gneiss led Girard (1990) to consider the gneiss as more deformed areas of the units of the Courdon Intrusive Suite and the Koroc River Group. The Lomier Complex is in tectonic contact with the Sukaliuk Complex in the west (LPSZ) and the Tasiuyak Complex in the east (ASZ).