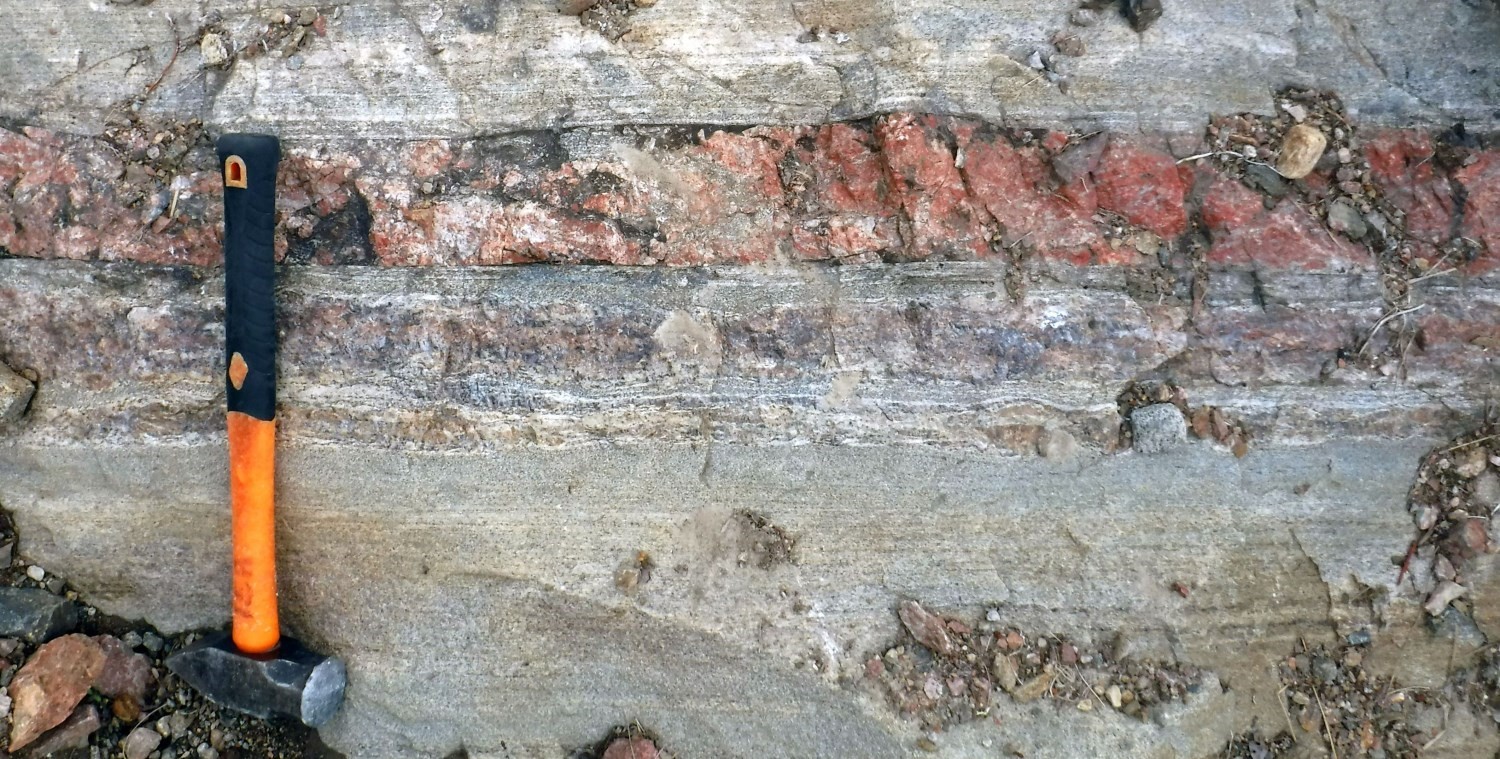 The Lomier Complex was defined by Girard (1990) in the Lac Courdon area (NTS sheet 14E12). It consists of hypersthene gneisses of various compositions characterized by a strong aeromagnetic signature and a N-S tectonic grain along the Québec-Labrador border. This complex has also been described in the Lac Henrietta area (Lafrance et al., 2015) and extended northward in the Koroc River and Hébron area (Verpaelst et al., 2000) and in the Point le Droit area (Mathieu et al., 2018), where it pinches on the Abloviak Shear Zone (ZCabl) that shifts to the WNW in this area.

In the Koroc River and Hébron area, Verpaelst et al. (2000) had grouped units from the Courdon and Koroc River suites within undifferentiated units of the Lomier Complex. As part of a synthesis of the southeastern Churchill Province (Lafrance et al., 2018), units were standardized across the Falcoz Lithotectonic Domain (Lafrance and Vanier, 2022). The table below summarizes the equivalences between the current and previous units.

The Lomier Complex consists of two closely related packages in the field: a supracrustal sequence, attached to the Koroc River Suite, which is intersected by the Courdon Intrusive Suite. Girard (1990) grouped rocks whose protoliths are no longer recognizable due to their heterogeneity, as well as those that have developed intense tectonic banding in gneiss units of the Lomier Complex (pPlom). This author considers rocks of the Courdon Intrusive Suite and the Koroc River Suite to be the protoliths of these gneisses. The Lomier Complex consists of two units: a hypersthene gneiss unit (pPlom1) and a banded gneiss unit with alternating diorite and granite (pPlom2). 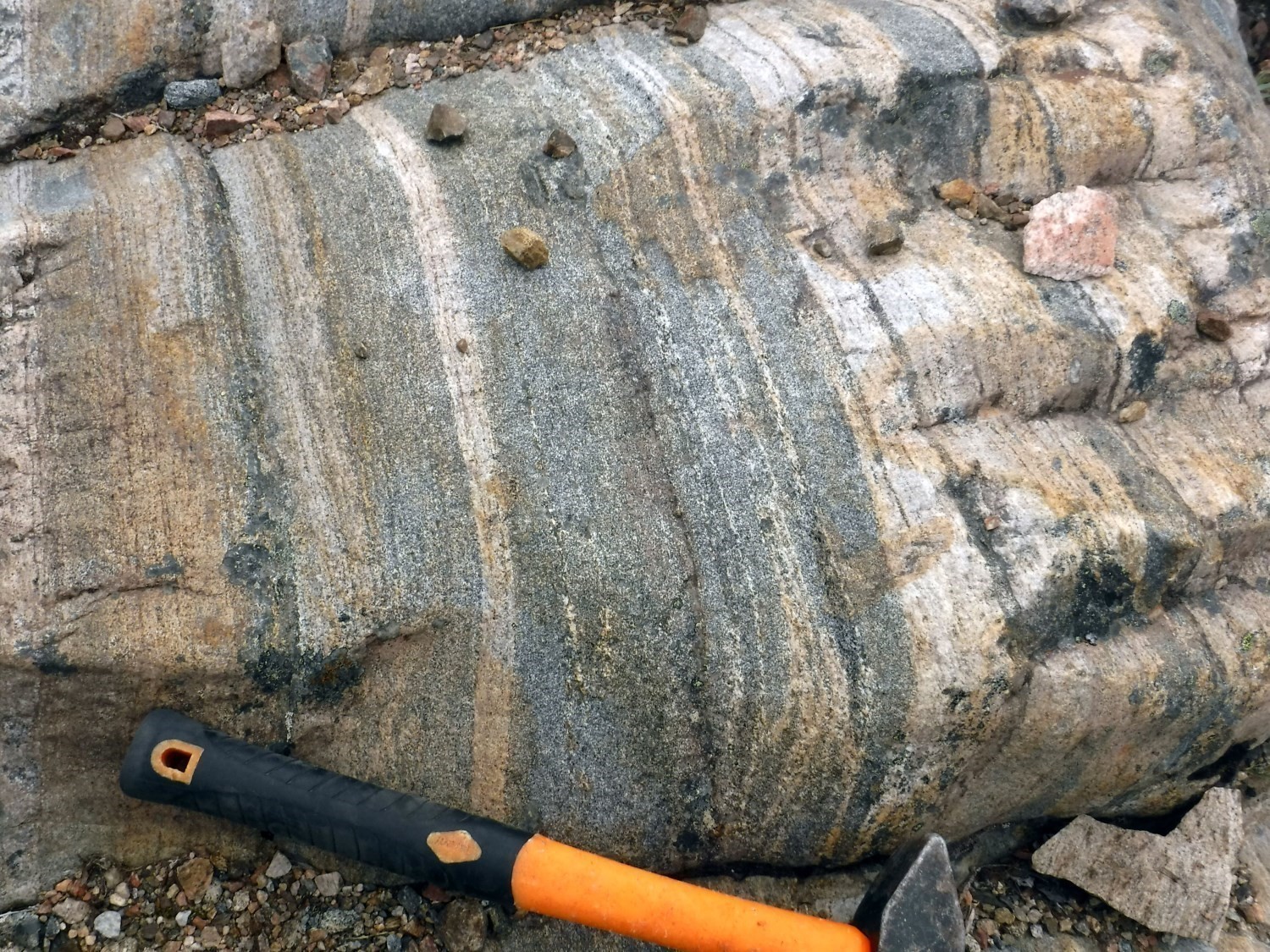 Gneisses of the Lomier Complex are considered to be alternating millimetric to decametric horizons of Koroc River Suite and Courdon Intrusive Suite rocks in deformation zones. They usually contain decimetric horizons that are better preserved and in gradual contact with these units. Overall, the gneisses show a well-developed foliation and lineation, commonly mylonitic with quartz bands and rods. According to Girard (1990), gneiss represents zones of mixing between different pretectonic to syntectonic lithologies. The enderbite protolith dominates (60%) and is intertwined with amphibolite (30%) and paragneiss (10%). Banding occurs at all scales, from decametre to millimetre, with bands continuous hectometrically or in regular or heterogeneous klippes. Contacts are paralleled and transposed into foliation. The mineralogy of the gneisses is similar to that of their protoliths (Courdon Intrusive Suite and Koroc River Suite).

Gneisses of the Lomier Complex has sharp banding with alternating millimetric to decamatric bands and horizons of enderbite, diorite, charnockite and opdalite. All of these phases are fine to very fine grained and highly magnetic. Rocks are affected by a reduction in grain size of variable intensity, marked by fine-grained corridors between quartzofeldspathic porphyroclasts (Charette and Guilmette, 2014). Mineral phases have undulatory extinction, deformed twins, and indented crystalline edges, indicating intense deformation. Gneissosity is defined by the concentration of orthopyroxene in laminae and the presence of quartz bands with subgrain extinction. Locally, it was possible to distinguish predominantly enderbitic (pPlom1a) or predominantly charnockitic (pPlom1b) gneiss. 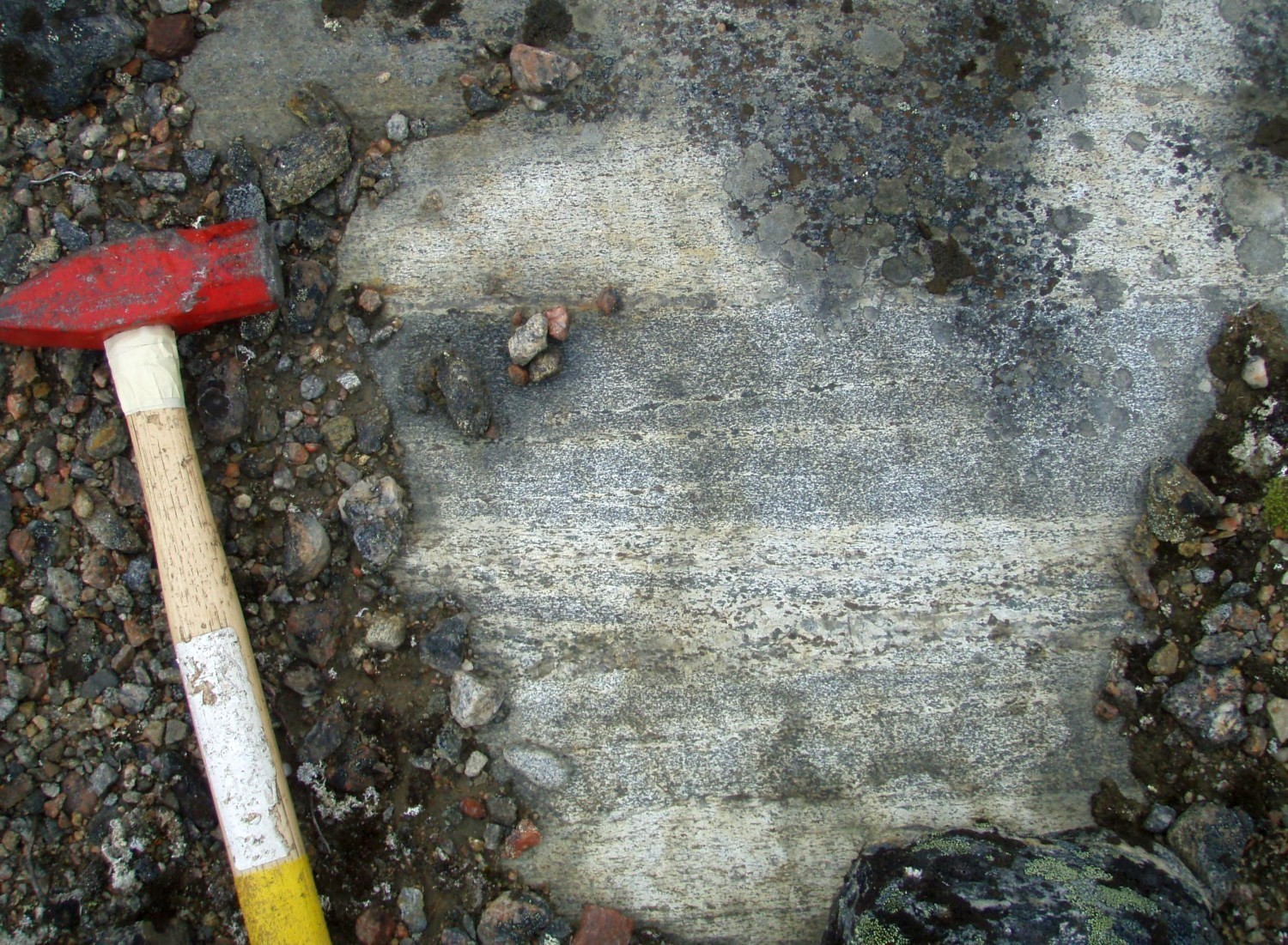 Subunit pPlom1a is characterized by the dominance of enderbitic horizons in gneiss (50-65%). These greenish or brown sugar coloured leucocratic horizons contain 5 to 12% orthopyroxene. Gneiss also comprises 20 to 35% intermediate and mafic horizons (hypersthene diorite and gabbronorite), generally slightly finer than felsic horizons. These contain 35 to 55% ferromagnesian minerals, dominated by orthopyroxene and clinopyroxene. Enderbitic gneiss also contains diffuse centimetric bands of slightly coarser-grained enderbite and charnockite, which could represent leucosome. Accessory minerals observed in the different phases of the gneiss are apatite, zircon, opaque minerals and epidote. Orthopyroxene is variably retrograded to hornblende and biotite. 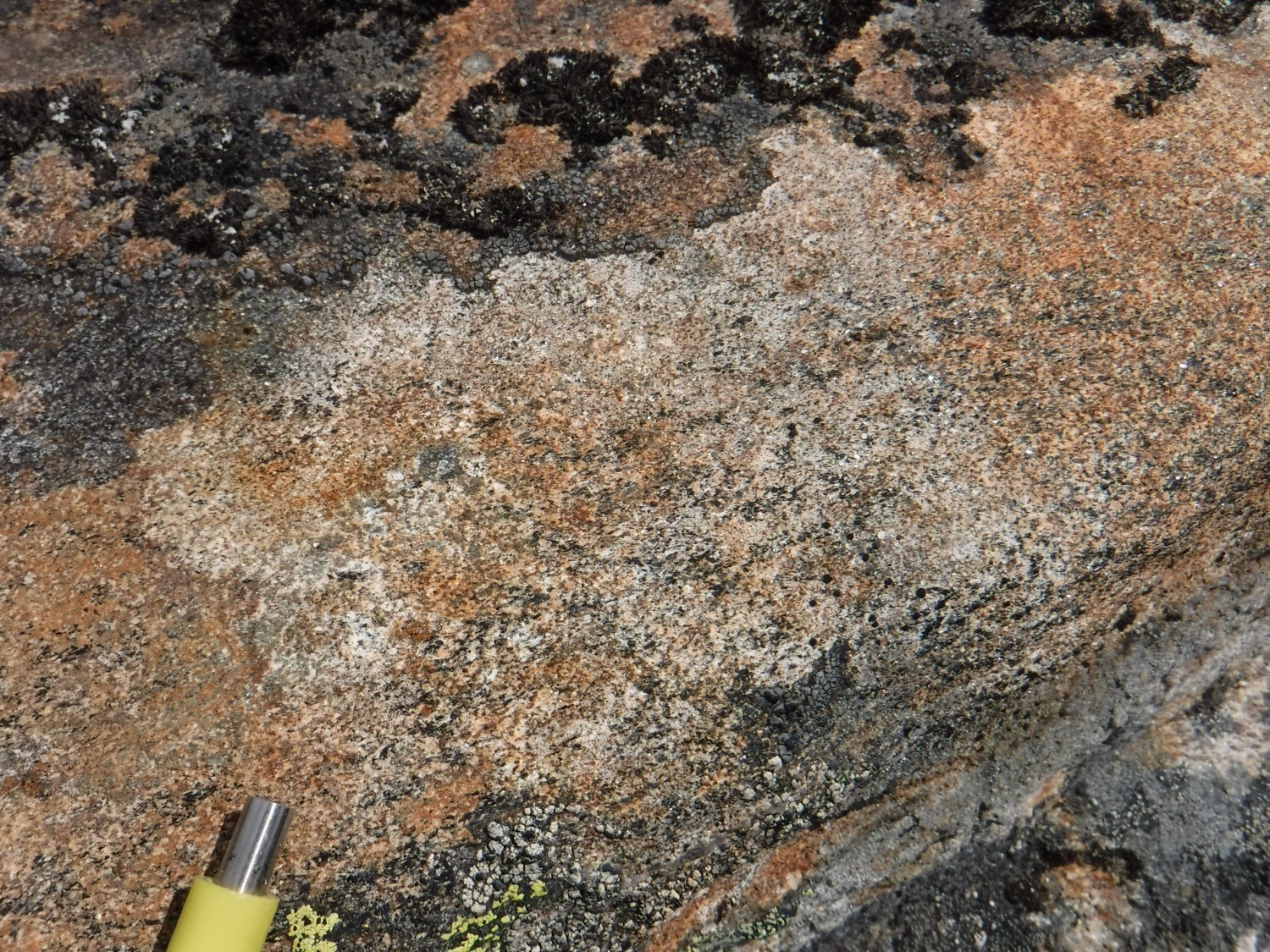 The charnockitic gneiss is light brown sugar and contains 4 to 10% ferromagne﻿sian minerals, mainly pyroxenes. Stretching of minerals is generally more developed than banding and foliation. Banding, which is hardly visible in outcrop, is marked by the variation of the percentage of K-feldspar (charnockite to opdalite) and in grain size (very fine to fine), which can be easily observed on stained samples. Between 5% and 15% diffuse bands or intrusions of leucocratic and coarse-grained charnockite are paralleled in deformation. K-feldspar is perthitic and commonly rimmed with myrmekites. Ferromagnesian minerals of charnockitic gneiss are dominated by broken orthopyroxene, not altered or partially replaced by a mixture of iddingiste and carbonates. The gneiss also contains thin biotite flakes and up to 2% finely disseminated magnetite. The main accessory minerals are apatite, zircon, amphibole (replacing pyroxene) and interstitial carbonates. Clinopyroxene and garnet are also observed sporadically. 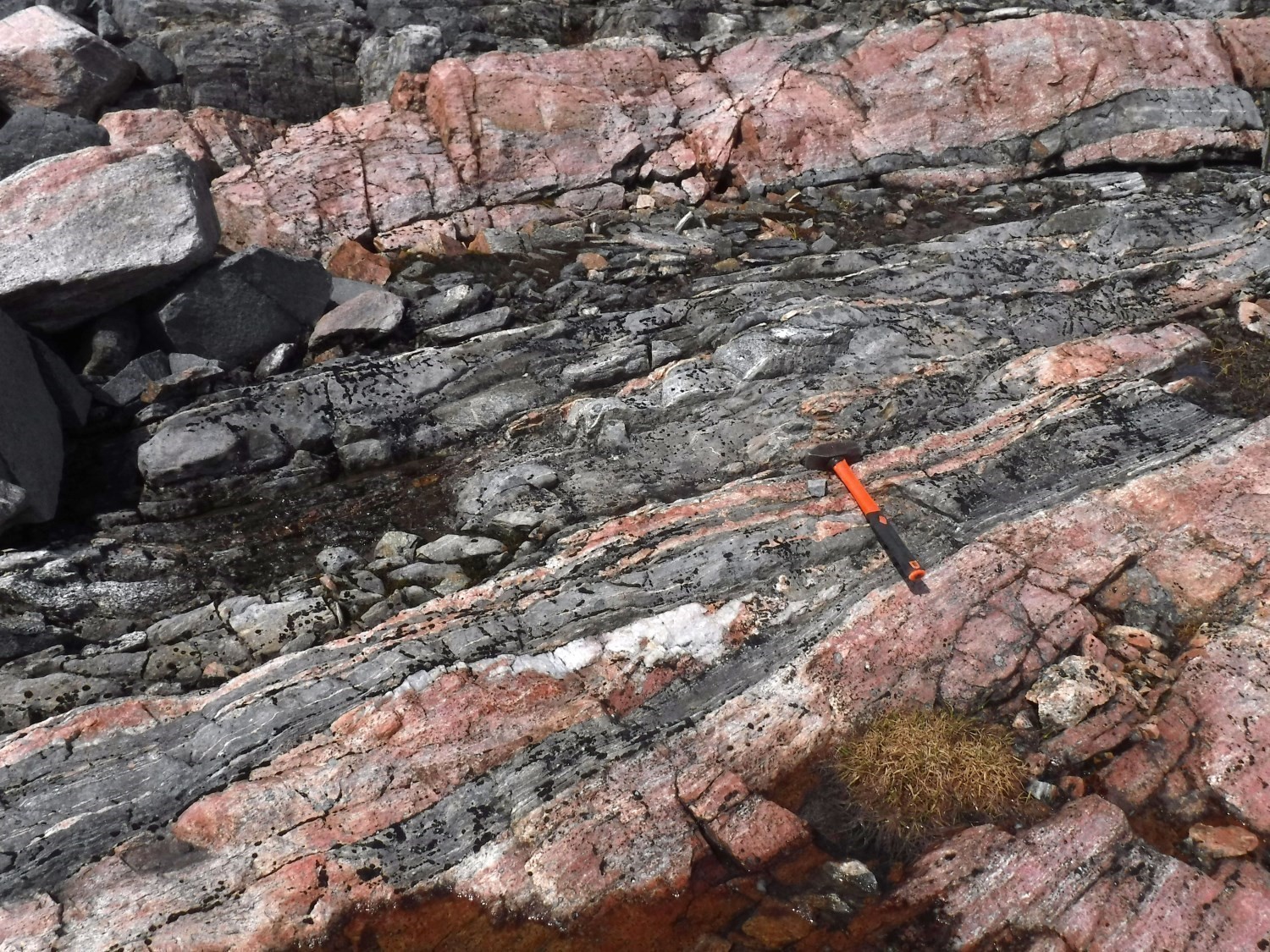 The granitic gneiss unit forms a 3 to 5 km wide strip on the western edge of the Lomier Complex and probably represents an area of retrograde metamorphism linked to the Lac Pilliamet Shear Zone (ZCpil). This unit consists of two deformed alternating phases in decimetric to metric horizons: a dioritic grey phase (locally granitic) and a coarser-grained pink granite phase. The granitic phase is generally dominant. The diorite is granoblastic and contains between 15 and 35% ferromagnesian minerals, consisting of green hornblende and chloritized brown biotite. Pink granite is hololeucocratic, not granoblastic. It is slightly foliated to ultramylonitic and hematitized along faults. According to Girard (1990), the granitic phase represents veins and lenses of leucosome with sharp contacts with gneiss (paleosome). A thin biotitic melanosome locally forms a millimetric rim at the interface between granite and host gneiss. The granite is dominated by partially recrystallized microcline-rich lenses alternating with quartz bands with undulatory extinction. It contains a lesser amount of biotite, brown or green, with zircon and opaque inclusions, as well as muscovite and chlorite.

The Lomier Complex is a 10 to 15 km wide N-S strip spanning more than 200 km long along the Québec-Labrador border. It is limited by the ZCpil to the west and the ZCabl to the east. In the northern part of the Falcoz Lithotectonic Domain, the ZCpil converges with the ZCabl, which then branches off to the west-northwest in this area. The Lomier Complex then occurs at the junction of the two shear zones. Only a few bands of supracrustal rocks assigned to the Koroc River Suite are present in the ZCabl at the northern end of the Falcoz Domain. The gneiss units cover an area of ~772 km2 within the Falcoz Domain. Specifically, units pPlom1 and pPlom2 occupy ~274 km2 and ~238 km2 respectively, while subunits pPlom1a and pPlom1b cover an area of ~130 km2 each.

An age of ~1877 Ma was obtained in Labrador from an enderbitic gneiss located at the eastern edge of the Lomier Complex (Bertrand et al., 1993). Inherited ages obtained in a sample from a gneiss located within the ZCabl (outcrop 2017-JV-2140) are similar to those obtained from detrital zircons in a paragneiss from the Koroc River Suite (2447-2039 Ma; Charette et al., 2021), suggesting that the sample analyzed would be a gneiss of sedimentary origin. The metamorphic age around 1930 Ma is interpreted to be that of the metamorphic episode that initiated gneiss formation (David, 2020).

The transitional and diffuse contact between the rocks of the Courdon and Koroc River suites and the gneisses of the Lomier Complex led Girard (1990) to consider that the gneisses represent more deformed zones of these two suites.

The origin of the Lomier Complex remains unknown at this time (Wardle et al., 1990 and 2002; Lafrance et al., 2016; Corrigan et al., 2018; Charette et al., 2021), which represents a significant gap in the geodynamic evolution of the region (Charette, 2016). It could be an equivalent of the Cumberland Batholith on Baffin Island (St-Onge et al., 2009; Wardle et al., 2002) and thus be interpreted as the root of a magmatic arc emplaced at the eastern margin of the Falcoz Lithotectonic Domain (Ermanovics and Van Kranendonk, 1998). However, the most accepted hypothesis is that it is a continental arc related to eastward subduction of the Falcoz Lithotectonic Domain beneath the Nain Province (Van Kranendonk and Wardle, 1996; Wardle et al., 2002).