The term Koroc River Group was first used by Hoffman (1988) to group sequences of supracrustal rocks currently assigned to the Lake Harbour Group (pPhb) in the Koroc River area (NTS sheet 24I). Girard (1990) also used the term Koroc River Group to refer to rocks of supracrustal origin in the Courdon Lake area (sheet 14E) as an extension of volcano-sedimentary sequences of the Koroc River area. Mapping of the entire southeastern Churchill Province (SECP) and aeromagnetic survey show that this is not the case and cannot be assigned to the same stratigraphic unit. Considering that supracrustal rocks at the eastern edge of the Core Zone are located in the Lake Harbour Group, although correlation with the type area on Baffin Island (Jackson and Taylor, 1972) is uncertain, the Koroc River Group, as used by Girard (1990), is maintained for volcano-sedimentary sequences located between the Lac Pilliamet Shear Zone (LPSZ) in the west and the Abloviak Shear Zone (ASZ) in the east.

The Koroc River Group was also described in the Henrietta Lake area (Lafrance et al., 2015) and continued northward in the Koroc River and Hébron area (Verpaelst et al., 2000) and in the Point le Droit area (Mathieu et al., 2018). The degree of metamorphism in these rocks, including loss of primary structures, makes the use of the term group inappropriate. Since this is a well-established name in the literature, the term Koroc River Group has been maintained, however, the unit ranks as a suite.

Girard (1990) defined the Koroc River Group as an irregular succession of aluminous paragneiss and amphibolite with minor amounts of iron formation, marble, calcosilicate rocks, quartzite and quartzofeldspathic rocks similar to those of the Courdon Intrusive Suite. The Koroc River Group consists of four units: 1) an amphibolite unit (pPko1); 2) a paragneiss and leucogneiss unit (pPko2); 3) a marble and calcosilicate rock unit (pPko3); and 4) an iron formation unit (pPko4). The description of these units is mostly taken from Girard (1990) since few outcrops were visited during the Ministère’s mapping campaigns conducted in 2013 and 2017 (Lafrance et al., 2015; Mathieu et al., 2018).

Amphibolite is the dominant unit of the Koroc River Group, representing over 60% of the outcrops. It occurs as metric to kilometric horizons or sequences interbedded in other units of the Lomier Complex (pPlom). The rock is intermediate in composition, grey, fine grained, even grained, granoblastic and weakly foliated. It is predominantly composed of green hornblende in association with clinopyroxene (augite) that it replaces. In most cases, amphibolite also contains hypersthene, with the exception of a sequence located in the western portion of sheet 14E12 that was assigned to subunit pPko1a. This retromorphosed sequence is located near the LPSZ in a zone of granitic gneiss also free of orthopyroxene (pPlom2). Amphibolite is characterized by the presence of plagioclase centimetric lenses (leucosome) with hypersthene, augite and/or hornblende porphyroblasts. Red garnet of rounded habitus is observed locally in association or as inclusion in pyroxene aggregates. Its abundance is locally close to 2%. The accessory mineral assemblage consists of reddish brown biotite, zircon, apatite and globulous epidote in plagioclase. 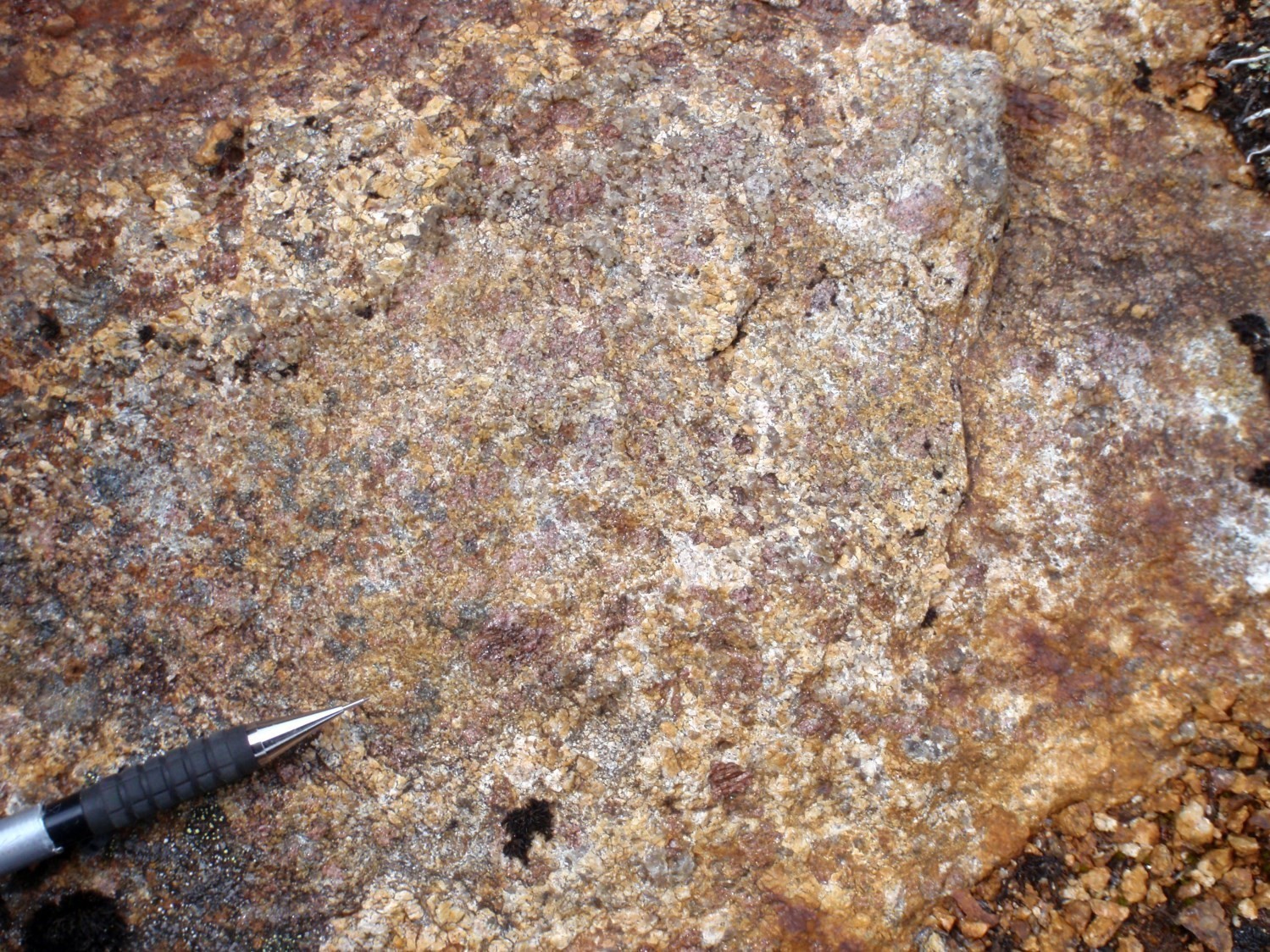 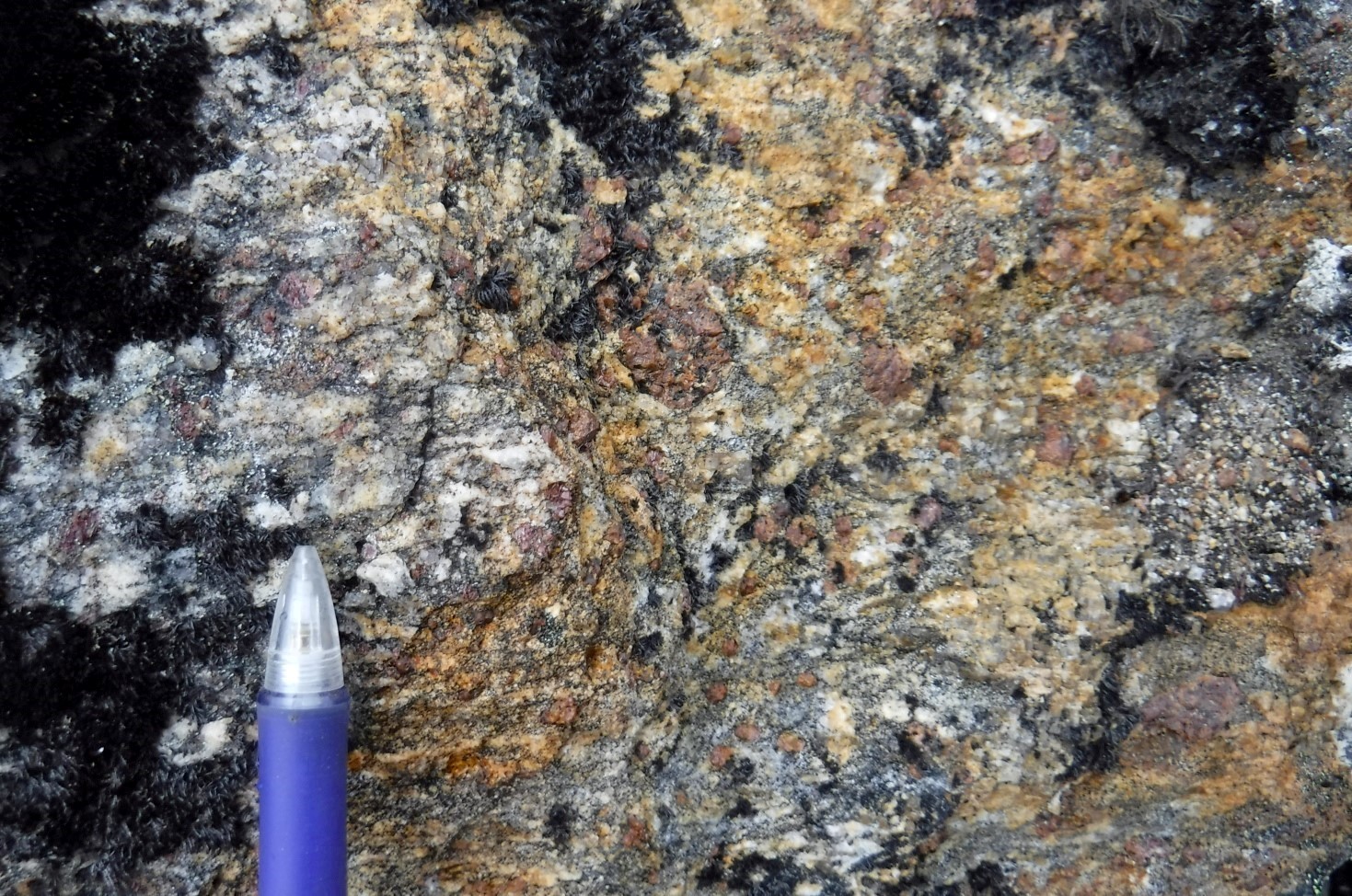 Unit pPko2 forms horizons, varying in width, followed over several kilometres long in the Lomier Complex. Their rusty patina and gossan strings that are easily spotted in the field make them a lithological marker for defining the structural grain of the region. Girard (1990) describes several lithofacies that are entangled in this unit and are not distinguished on the map; aluminous paragneiss, ferro-aluminous paragneiss, quartzite and leucogneiss. Aluminous paragneiss has a predominantly quartzofeldspathic paragenesis with purple poikiloblastic garnet, fibrous sillimanite, brown biotite and pyrrhotite. Quartz is a significant proportion (40-80%) and forms rods with undulatory extinction in a microcline and plagioclase matrix with indented grain edges. Orthopyroxene is observed locally.

Ferro-aluminous paragneiss has less than 50% quartz and feldspar, and is dominated by cordierite accompanied by garnet, prismatic or poikiloblastic sillimanite, brown biotite and pyrrhotite. Zircon, apatite (scarce), ouvarovite, picotite and hercynite (especially in the core of garnet and sillimanite), as well as scarce grains of hypersthene and augite, compose the accessory mineral assemblage. Scapolite, sphene and allanite with epidote core are the secondary minerals. Garnet is granular to globulous, rich in inclusions (biotite, pyrrhotite, sillimanite, quartz and feldspar), rounded, flattened or stretched in the tectonic grain. It forms polymineralic aggregates with sillimanite, biotite and accessory minerals. Quartz is variable in proportion (locally very low) and forms zones and bands as well as droplets and scarce myrmekites in feldspar. K-feldspar can be either absent or abundant in the rock. All minerals show a granoblastic texture. However, late deformation commonly makes intergrowing or granulated grain edges, polydomanial or undulatory extinctions, and deformed twin networks. Quarzite horizons generally contain finely disseminated sulphides and graphite.

Leucogneiss is poor in mafic minerals, which consist of biotite (<2%), garnet and opaque minerals. This leucogneiss is located mainly in the eastern portion of the Lomier Complex. It is granoblastic to saccharoidal. Paragneiss contains between 20 and 60% decimetric to metric subconformable horizons of whitish trondhjemite, (leucogranitoid), which could be derived from partial melting of paragneiss (Girard, 1990). These horizons are locally pegmatitic but usually medium grained. They contain about 30% quartz, 55% plagioclase and less than 5% biotite. Antiperthites develop in plagioclase for a total of 5% except within grains that have undergone dynamic recrystallization. Deformation is generally not intense and the intrusive appearance is preserved.

Unit pPko3 occurs as thin metric horizons measured over several kilometres along tectonic grain. Rocks are stretched in deformation corridors, in association with gneiss of the Lomier Complex. They are more abundant and less deformed in sheet 14E13. Marble, which exhibits marked differential erosion, is generally exposed in valley troughs and on cliff sides. Foliation, which is very circumvented, is defined by alternating carbonate and calcosilicate horizons. Marble is granoblastic and is composed of calcite, scapolite, vesuvianite and diopside with, in lesser proportions, quartz, feldspar, biotite and sphene. Brecciated textures are common and are characterized by rounded calcosilicate aggregates floating in a matrix of fine-grained carbonates. Calcosilicate facies with diopside and plagioclase are associated with these breccias.

Unit pPko4 represents a single area (sheet 14E12) consisting of small sulphide facies iron formation lenses in amphibolites and paragneiss of the Koroc River Group. Iron formation has a brecciated to nebulitic texture in which rounded silicate fragments, millimetric to centimetric, float in a matrix of massive and granoblastic pyrrhotite (<40%). Fragments consist mainly of granoblastic plagioclase but also adjacent quartzofeldspathic rocks. Biotite grows at the interface between fragments and sulphides. There is strong surface alteration of bird’s eye pyrrhotite composed of marcasite and pyrite. Trace chalcopyrite shows mutual relationships on the edge of pyrrhotite grains or is remobilized in thin fractures within silicate phases. Pentlandite forms rare exsolutions in pyrrhotite while isolated sphalerite grains are dispersed in silicates.

The Koroc River Group forms continuous horizons over kilometres, varying but generally hectometre wide, in the Lomier Complex. The latter draws a 10 to 15 km wide N-S strip followed over 200 km long along the Quebec-Labrador border. It is limited by the Lac Pilliamet Shear Zone (LPSZ) to the west and the Abloviak Shear Zone (ASZ) to the east.