The Lac Turcotte Fault (FAtur) was first traced by Poirier (1989) during work carried out as part of a master’s project. This author considered this fault to be a major structure that constituted the eastern boundary of the “Lac Rachel – Lac Murray” block, which roughly corresponds to the Rachel-Laporte Lithotectonic Domain. According to Wardle et al. (2002) and Corrigan et al. (2018), the northern part of the Lac Tudor Shear Zone (ZCtud) gradually curves towards the NW where it joins the FAtur. The 1:250 000 scale mapping work carried out between 2011 and 2016 by the Ministère and recent geophysical surveys (D’Amours and Intissar, 2012a, 2012b, 2013; Intissar et al., 2014) did not, however, allow Lafrance et al. (2020) to link the two structures.

As part of their synthesis of the Southeastern Churchill Province (SECP), Lafrance et al. (2020) shifted the boundary between the Rachel-Laporte and Baleine domains westwards in some areas. In the northern part, this boundary now corresponds to the appearance of Archean gneiss of the Ungava Complex, which coincides in this area with the Lac Olmstead Fault (FAolm). The trace of the FAtur now joins the FAolm in the Diana Lake area (NTS sheet 24K06). The boundary between the two lithotectonic domains has also been moved westward in the southern part of the SECP. The exclusive presence of detrital zircons of Archean age in the Grand Rosoy Suite allowed Lafrance et al. (2020) to include this unit in the Baleine Domain. The FAtur was thus continued southwards along the western border of this unit.

The information available on the FAtur is limited as it is rarely exposed and the work was carried out at scale 1:250 000. Descriptions are supported by local observations.

The Lac Turcotte Fault is part of a system of large relay faults that mark the boundary between the Rachel-Laporte and Baleine lithotectonic domains, to the west and east respectively. In the NW part of the SECP, it is the Lac Olmstead Fault that marks this boundary, as far as the southern end of Olmstead Lake (sheet 24K06), where the FAtur takes over. In this area, the two faults are <3 km apart and parallel for ~65 km towards the SE, then the FAolm joins the FAtur. This structure has been observed sporadically in the field along its 684 km long trace. Its width is undetermined, but mylonitized layers were locally recognized up to a few kilometres on either side of the fault trace.

The main fabric of the FAtur is represented by planes of secondary tectonometamorphic mineral foliation Sn. This fabric is commonly folded due to the imprint of a later deformation phase (Poirier, 1989). The general orientation is NNW-SSE, except in the southern part, where it is rather N-S. As for other thrust faults (Gabriel, Lac Hérodier, Lac Olmstead, Pingiajjulik, Rachel and Pointe Reef) in the western part of the SECP, the FAtur is associated with an early NW-verging thrust phase and then folded during a subsequent deformation phase (Clark and Wares, 2004). 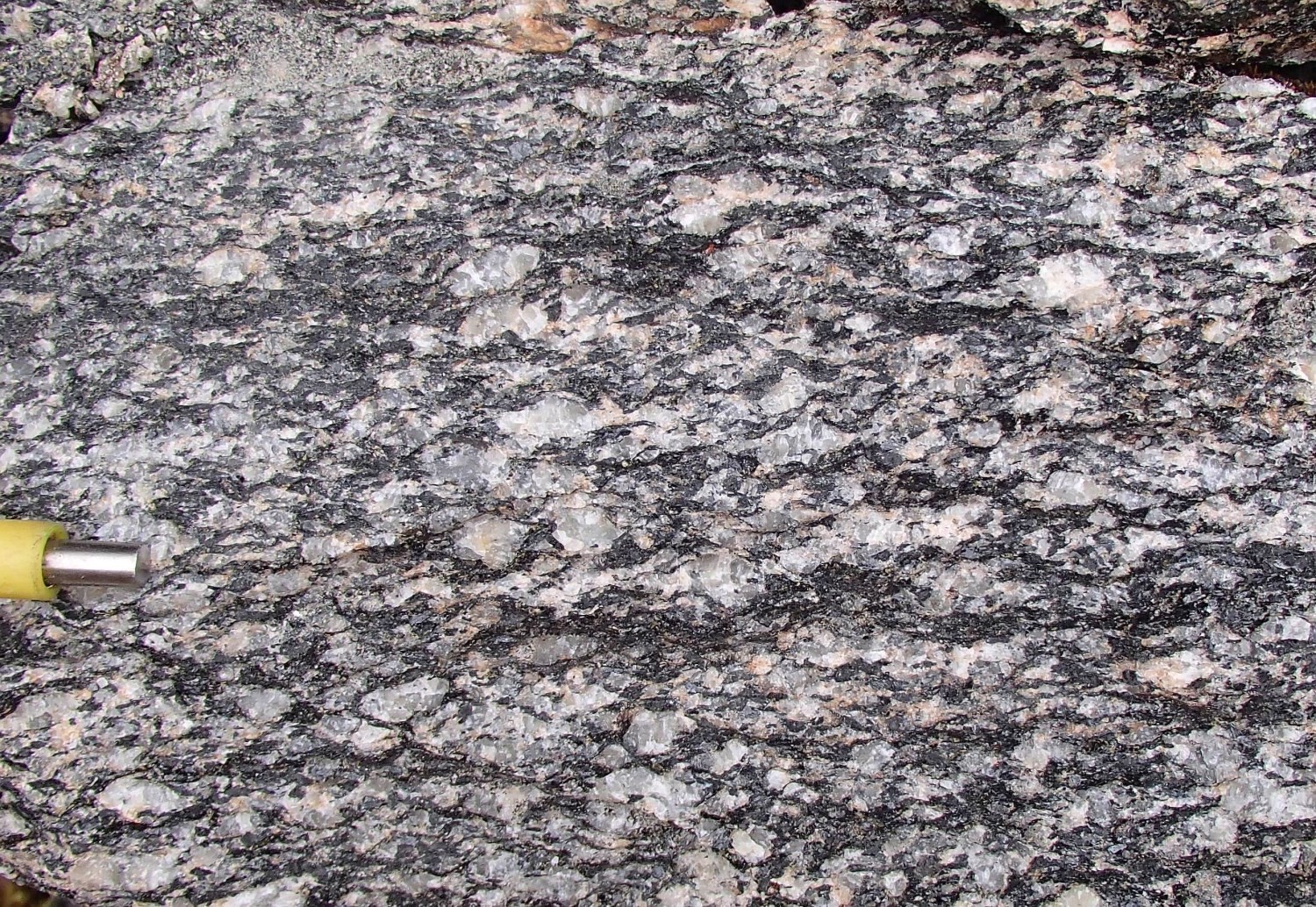 Centimetric to decametric layers of mylonite and protomylonite were locally observed along the FAtur. These more deformed layers have a protomylonitic or mylonitic planar fabric containing locally a subhorizontal stretch lineation towards the ESE, the east or the ENE. However, the number of lineation measurements is insufficient for a structural analysis. These more deformed zones contain feldspar porphyroclasts, discontinuous quartz bands and weak C/S fabrics. The leucosome of the False and Winnie suites, as well as quartz veins are boudinaged and folded in places. 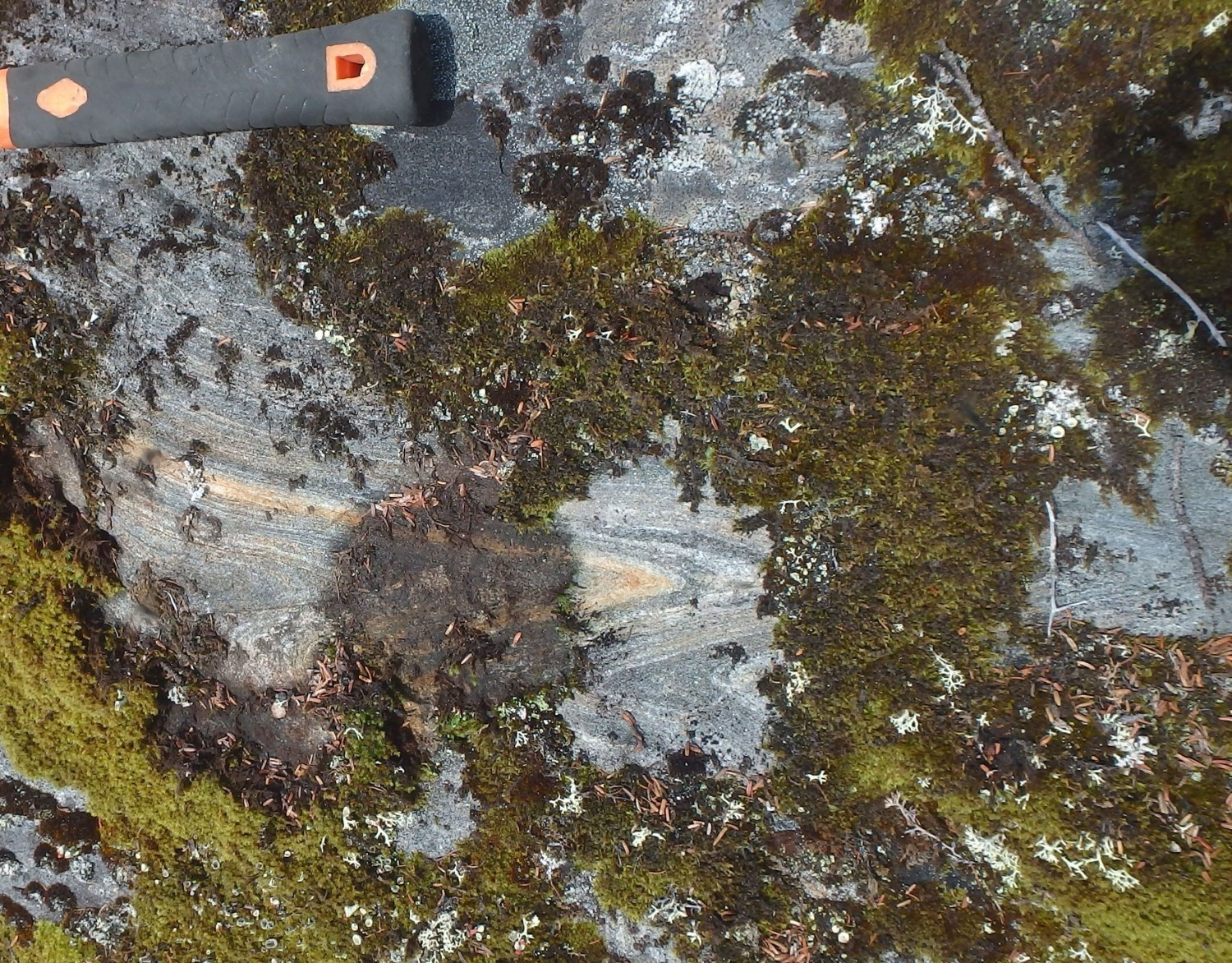 Clark and Wares (2004) attribute the development of large open NW-SE folds having shallow plunges to the SE to a late dextral strike-slip movement along large thrust faults associated with the New Quebec Orogen. According to Lafrance et al. (2020), open folds associated with this movement were observed mainly in the northern part of the Baleine Domain, whereas folds are rather tight to isoclinal in the south where they constitute an important structural element. The latter type of folds is locally observed at the scale of the outcrop along the FAtur.

Overturned folds associated with thrusting of the Baleine Domain on the Rachel-Laporte Domain during the New Quebec Orogenesis have also been described by Moorhead and Hynes (1990) in the Rénia Complex (Rachel-Laporte). These folds would have subsequently been repeated by the second phase of folding associated with the dextral strike-slip movement described above. 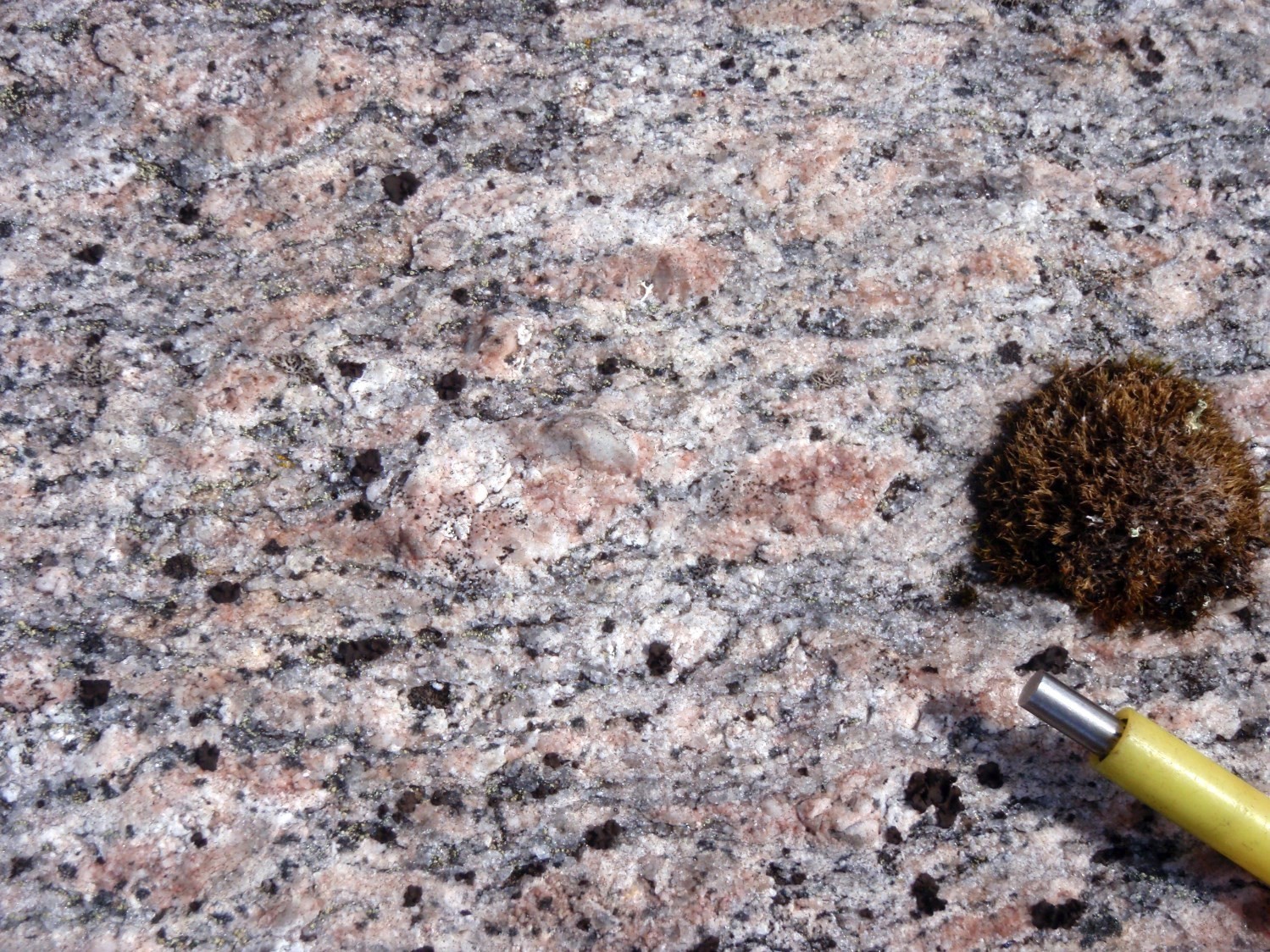 The few kinematic indicators observed along the FAtur consist of plagioclase or microcline porphyroclasts and weak C/S fabrics. However, these indicators are associated with the last episode of strike-slip deformation and confirm a dextral movement.

The main movement consists of thrusting followed by late dextral strike-slip. According to Perreault and Hynes (1990), the first movement would imply overthrusting of the Baleine Domain on the Rachel-Laporte Domain.

The FAtur generally marks a boundary between a less metamorphosed domain in the west and the attainment of anatexis conditions in the east (Charette et al., 2016; Godet et al., 2020a). In the northern part of Baleine Domain, this limit is represented by the Lac Olmstead Fault. Fieldwork suggests a gradual increase in the intensity of metamorphism of the Rachel-Laporte Domain as it approaches the Baleine Domain (Poirier, 1989; Perreault and Hynes, 1990). Metamorphic modelling and pretrochronology work of Godet et al. (2020) confirms that the metamorphic conditions reached are higher in the east than in the west of the FAtur, but also indicates the existence of a significant metamorphic discontinuity between the two domains. This discontinuity is revealed by the metamorphic diachronism between the Baleine and Rachel-Laporte domains, rather than by a gradient observed in the field which would reveal a gradual increase in metamorphic intensity.

In the Rachel-Laporte Domain, on the edge of the FAtur, the pressure and temperature conditions during the metamorphic paroxysm are estimated at 650°C and 0.76 GPa, whereas they are 790°C and 0.72 GPa in the central part of the Baleine Domain (Godet et al., 2020). Another sample from a more westerly area in the Rachel-Laporte Domain indicates conditions estimated at 620°C and 0.55 GPa (Godet et al., 2020).

Metric alteration zones of hematite, epidote and silica are locally recognized in the vicinity of the FAtur. It is likely that these are late compared to the movement of the fault.

The FAtur corresponds to a more or less sharply undulating magnetic lineament on the regional aeromagnetic map.

Godet et al., 2020 suggest that the FAturrepresent a tectonometamorphic discontinuity between the two lithotectonic domains from ~1830 Ma to 1800 Ma. During this period, westward thrusting of the Baleine Domain on the Rachel-Laporte Domain led to isothermal decompression of the former and amphibolite facies burial of the latter. Recent dating indicates burial of metasedimentary rocks in the Rachel-Laporte Lithotectonic Domain – located west of the Baleine Domain – under conditions of average crustal thickness at ~1804 Ma (Godet et al., 2020). This episode of thrusting and crustal thickening appears to predate the final dextral strike-slip movement, which would have occurred between 1793 Ma and 1783 Ma (Machado et al., 1989; Clark and Wares, 2008).