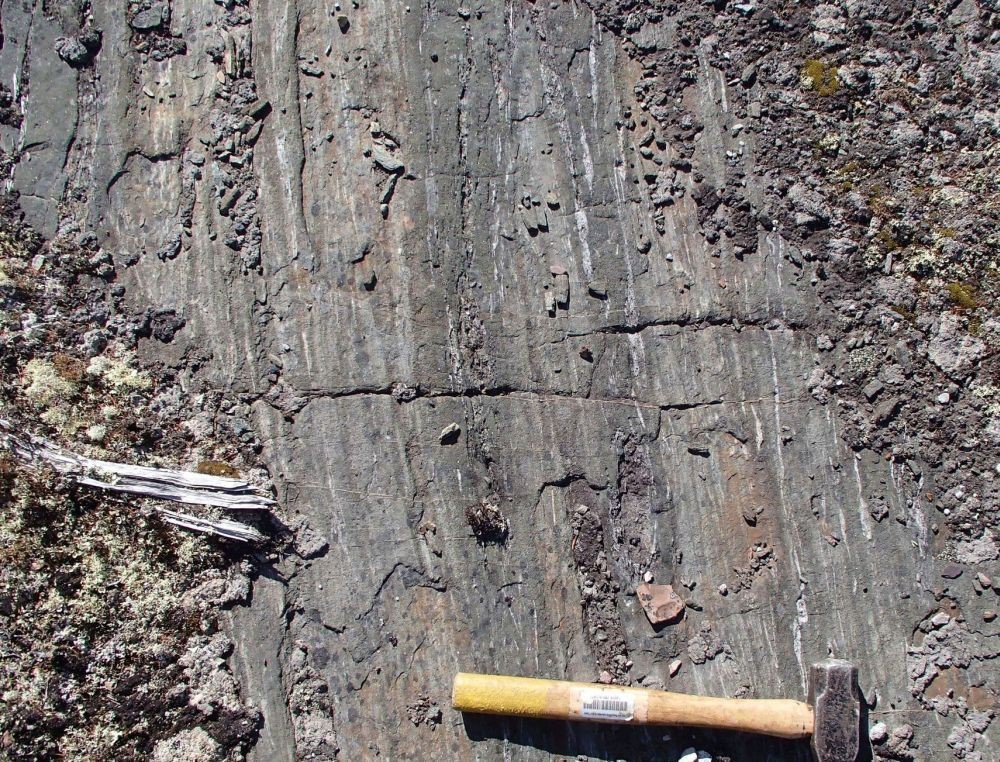 The Klein Suite was introduced in the Kuujjuaq and Ungava Bay area (Simard et al., 2013) to group all metamorphosed mafic and ultramafic rocks of the Laporte Supersuite. The Laporte Supersuite includes Paleoproterozoic volcano-sedimentary rocks of the Rachel-Laporte Lithotectonic Domain, which represents the eastern part of the New Quebec Orogen. The Klein Suite was continued southward in the Saffray Lake (Lafrance et al., 2014) and Jeannin Lake (Charette et al., 2016) areas. Units of the Klein Suite were also standardized southward to the Griffis Lake area (sheet 23P04), as part of a synthesis of the Southeastern Churchill Province (SECP; Lafrance et al., 2018). Bilodeau (2018) also mapped the Klein Suite in the Kuujjuaq area.

The Klein Suite groups Paleoproterozoic metamorphosed mafic and ultramafic rocks of the Rachel-Laporte Lithotectonic Domain. It consists of three informal units: 1) amphibolite and metabasalt (pPkle1); 2) metamorphosed ultramafic rocks (pPkle2); and 3)  metagabbro and glomerophyric metagabbro. Intrusive units are most commonly conformable within amphibolites and metasedimentary rocks of the Laporte Supersuite. However, sharp crosscutting has also been observed in places. 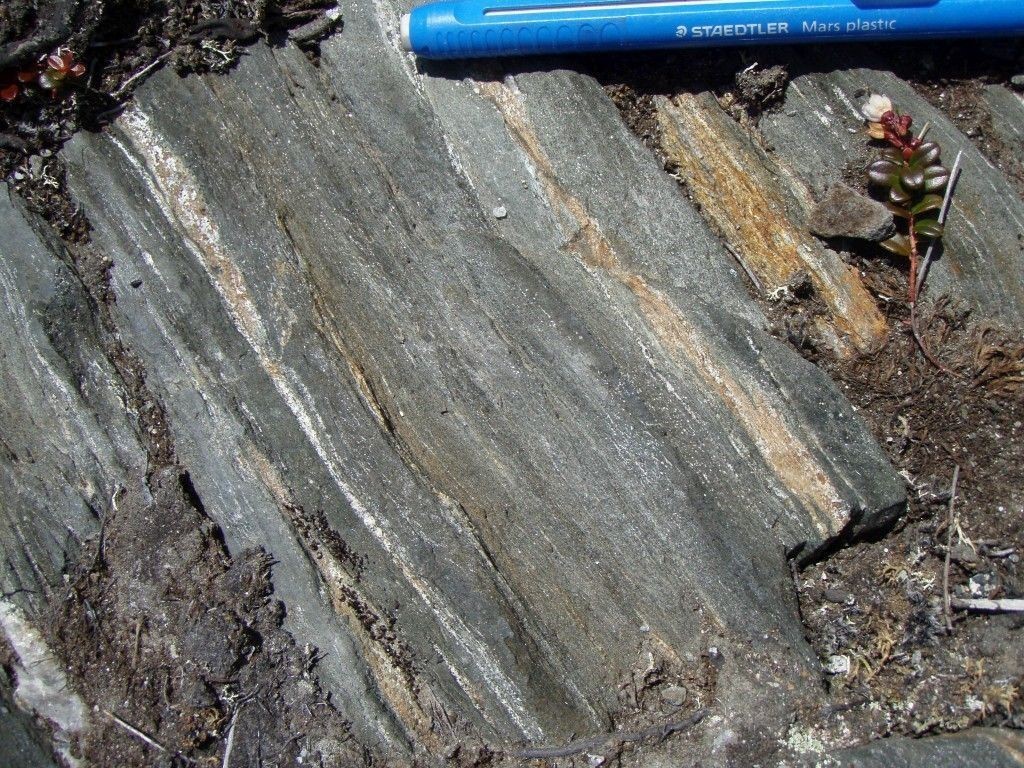 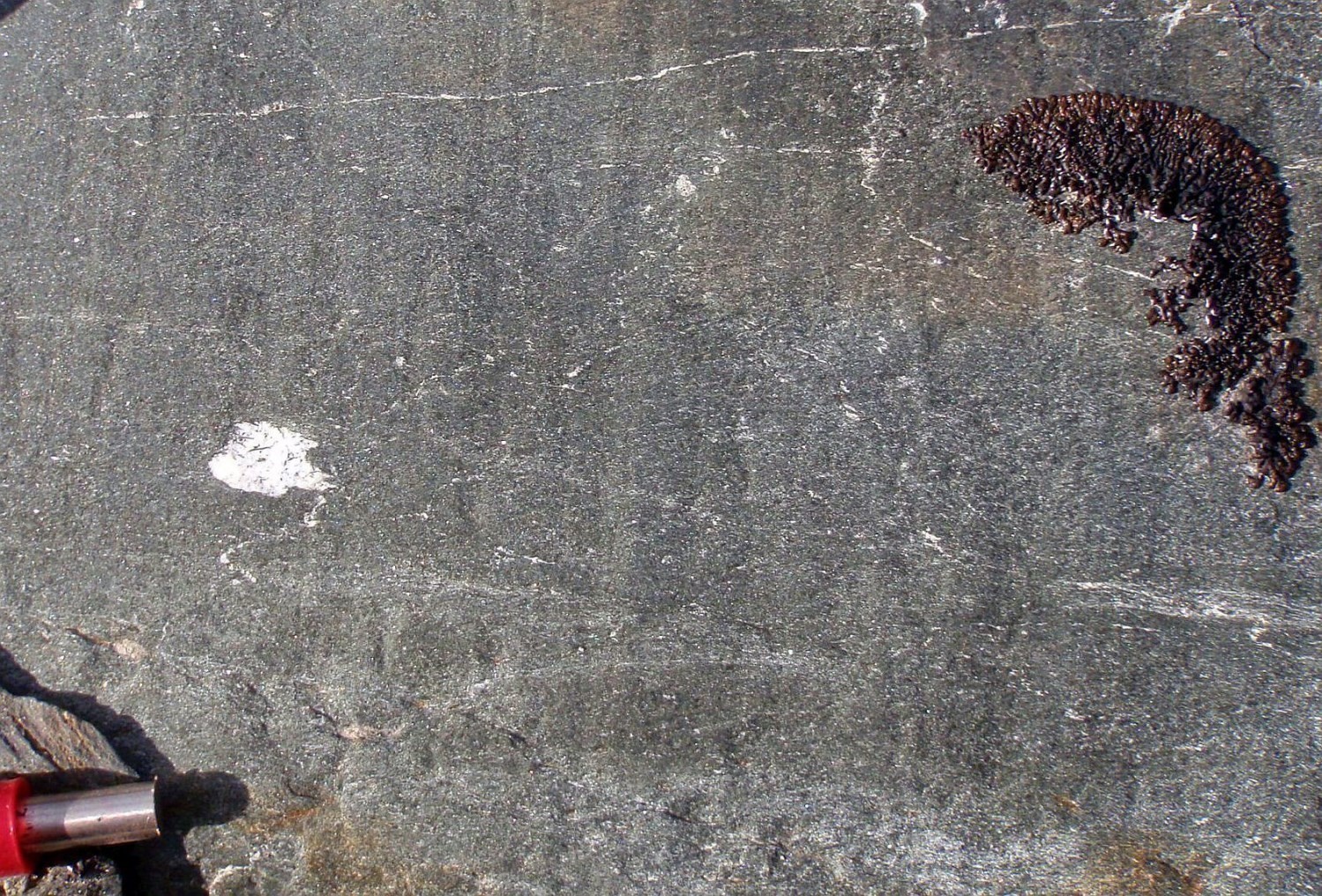 Amphibolites of subunit pPkle1a are banded, massive or schistose, dark green or black grey and fine to very fine grained, rarely medium grained. Banding is caused by variations in ferromagnesian mineral content. In thin sections, these rocks are characterized by a well-developed oriented granoblastic texture. They are composed of small hornblende prisms (50-85%) aligned in a fine-grained matrix of plagioclase ± quartz crystals that fill the pores. In places, hornblende also occurs as poikiloblasts more or less orientated in foliation. Some samples also contain 10-25% intergrown actinolite crystal clusters. Actinolite also replaces hornblende or clinopyroxene (uralitization), which is only preserved locally.

Amphibolite has been affected by retrograde metamorphism of regional importance, but generally quite low. This interpretation is supported by the common presence of chlorite associated with hornblende, more or less sericitized plagioclase, and the presence of carbonate. The latter fills fracture filling or is interstitial, replacing hornblende or plagioclase. Biotite and garnet are less common, but represent up to 10% of the rock locally. Staurolite has also been recognized in amphibolites around the Rénia and Boulder complexes. Almost all samples observed in thin sections contains sphene, apatite and opaque minerals (ilmenite ± magnetite). Epidote, zircon, allanite, tourmaline and sulphides are also present as accessory phases.

Klein Suite 1b (pPkle1b): Massive or Pillow Metabasalt and Metavolcaniclastics 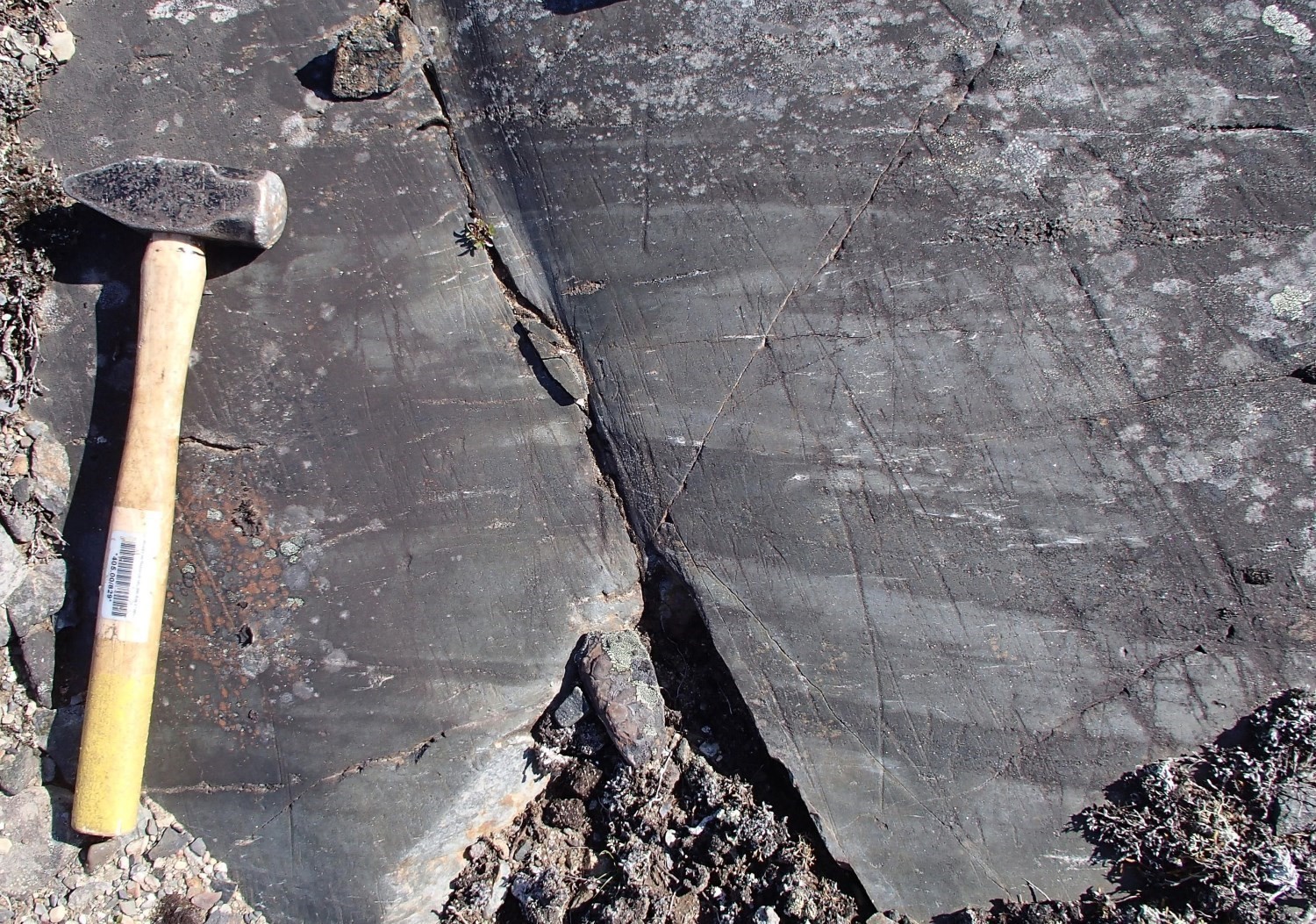 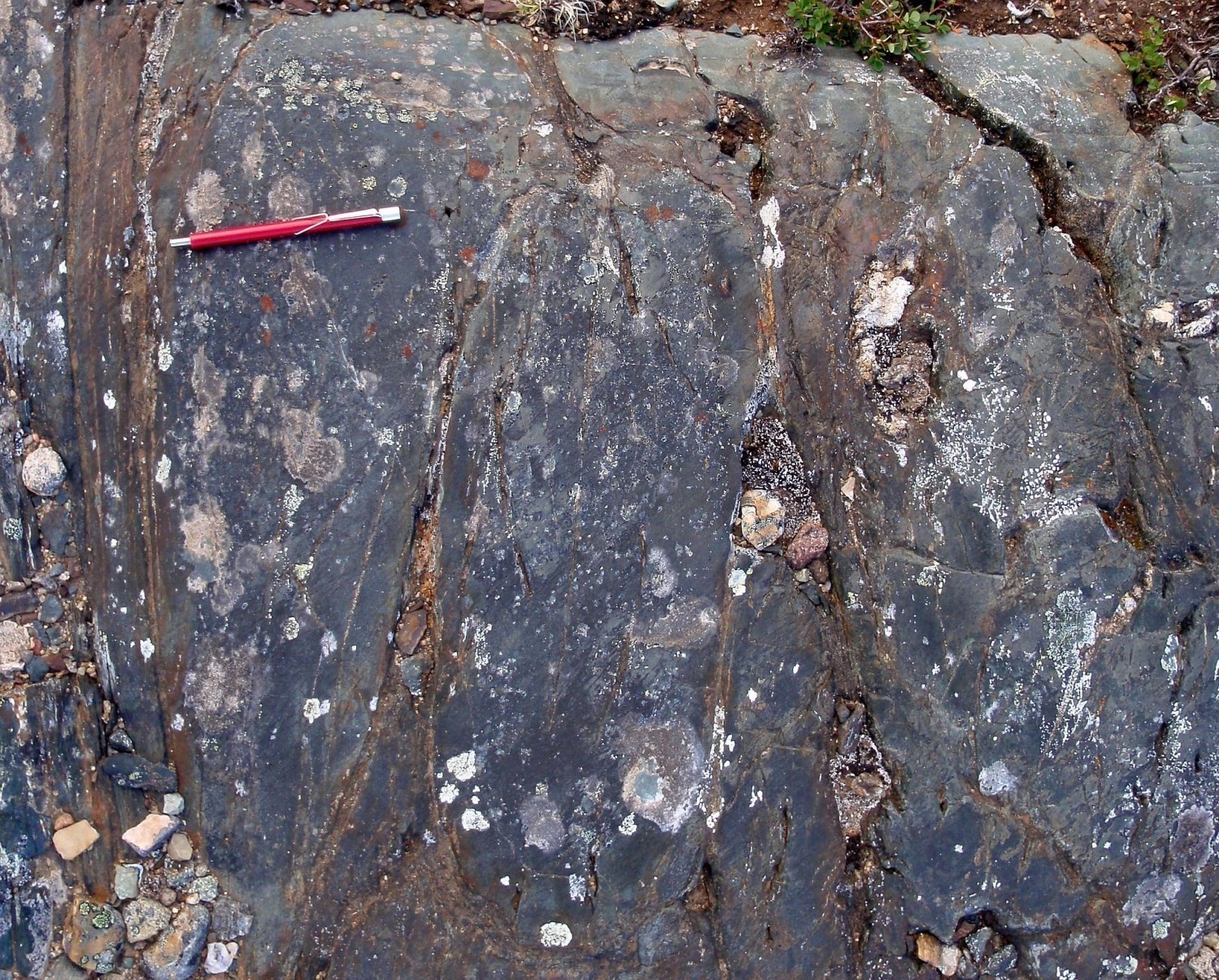 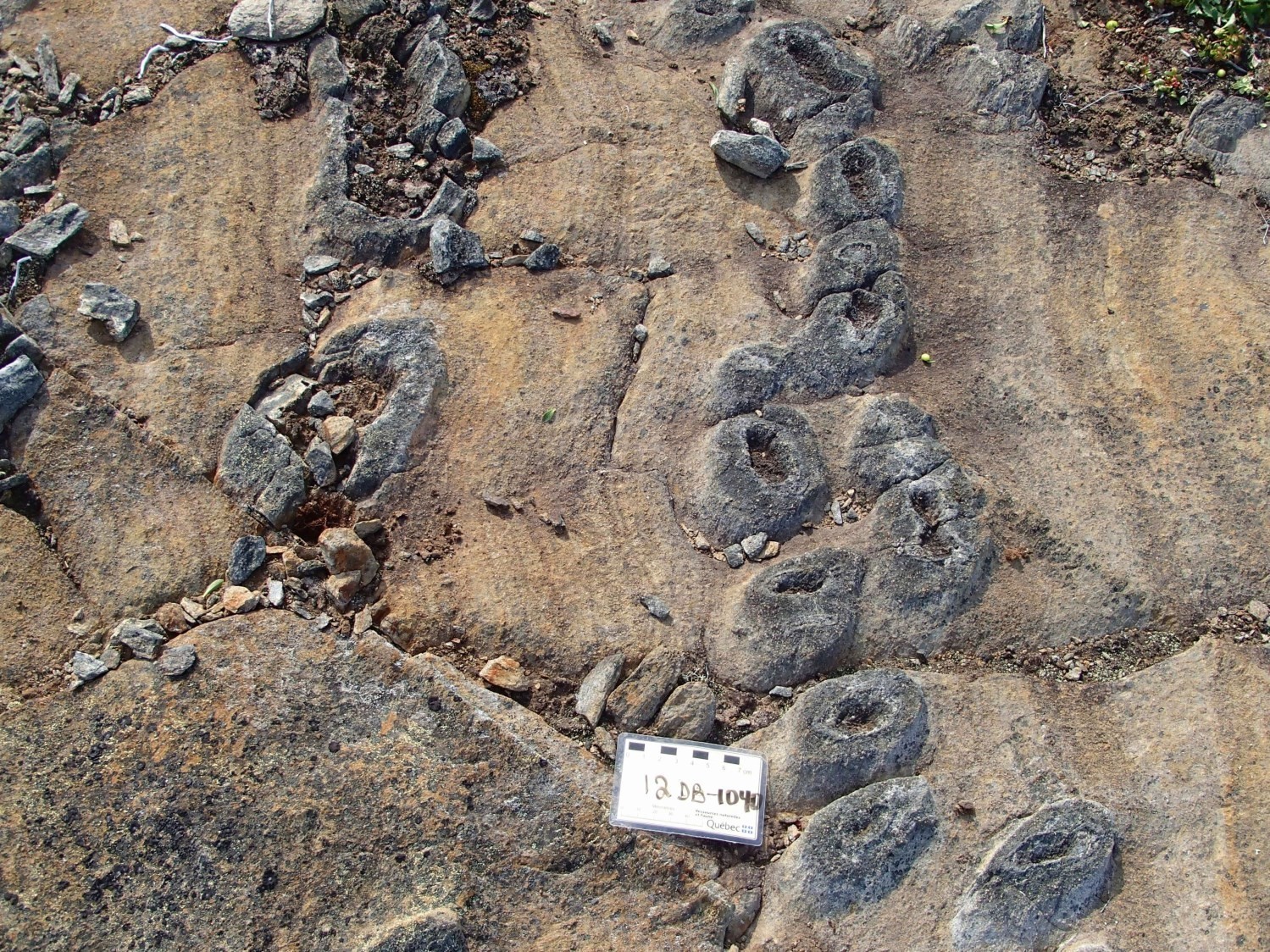 Subunit pPkle1b is similar to subunit pPkle1a, but is distinguished by the presence of layers where primary textures, such as pillows and vesicles, are preserved. Pillows are usually elongated in foliation and are 5 cm to 10 cm wide by 20 cm to 40 cm long. Due to deformation, stratigraphic polarities are generally impossible to determine. Layers of intermediate to mafic pyroclastic rocks and layers containing ovoid mafic fragments, which may represent pillows having hyaloclastic margins filled with quartzs, have also been described locally.

Klein Suite amphibolites are commonly cut by discontinuous and boudinaged carbonate or quartz veins. Amphibolites locally show strong carbonate and silica alteration in the form of lenses that, when sufficiently numerous, give the rock a brecciated texture. In the Bay aux Feuilles area, Sauvé (1959) recognized a unit of altered amphibolite that Simard et al. (2013) assigned to subunit pPkle1c.

Centimetric to metric layers of rocks belonging to various metasedimentary units of the Freneuse Suite are in places interstratified with amphibolites of the Klein Suite. Some areas with a larger proportion of these paraschist layers were assigned to informal subunit pPkle1d in the Bay aux Feuilles (Sauvé, 1959) and Thévenet Lake (Gélinas, 1958a) areas. 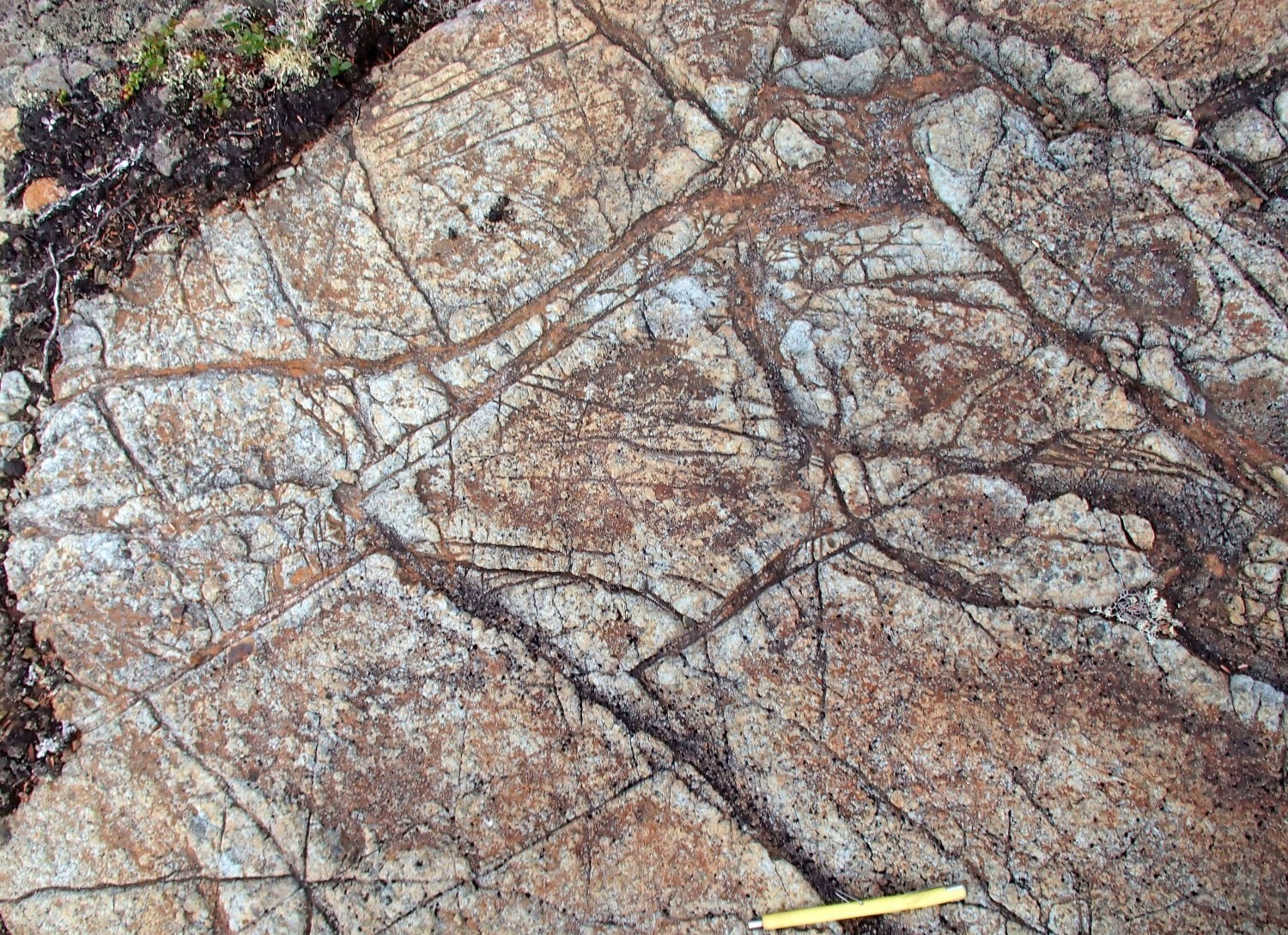 Unit pPkle2 consists mainly of metaperidotite and, to a lesser extent, metapyroxenite. Metaperidotite is very fine grained, foliated, highly magnetic, and blackish grey or light green in fresh exposure and buffy brown in altered surafce. On outcrops, relics of cumulate olivine crystals (35-50%) are commonly distinguished, giving the rock a spotted appearance. This texture is hardly observable in thin sections, underlined only by the circular arrangement of fine magnetite grains. Primary minerals of metaperidotite are generally replaced by a fine-grained mixture of tremolite acicular or in or large felt clusters, chlorite in large masses of fine crystals or felt clusters, carbonate and serpentine (iddingsite and antigorite). Two types of chlorite are often present, pennine and prochlorite. More or less altered olivine and pyroxene crystals are preserved locally. In some areas, the ultramafic rock is transformed into a mixture of carbonate and talc and is not magnetic. Metapyroxenite is massive or foliated, fine to medium grained and dark green. It is mainly composed of large amphibole crystals (actinolite and hornblende) with some clinopyroxene (<10%). 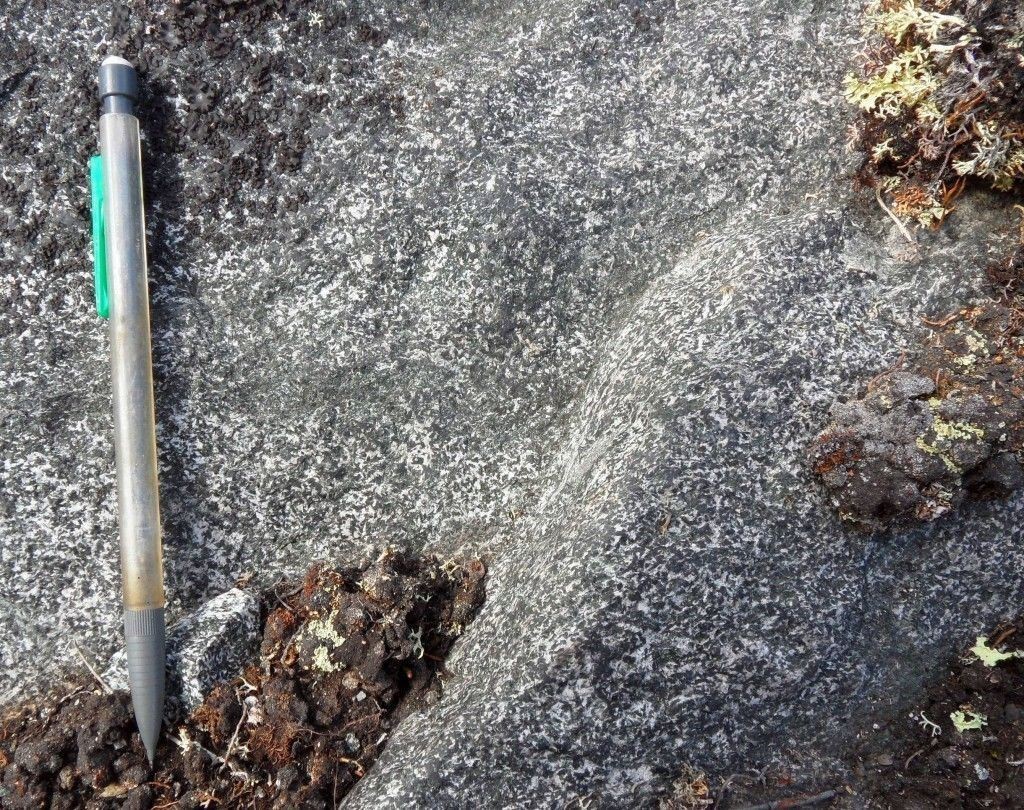 Metagabbro is homogeneous, non-magnetic, medium grained, massive, locally foliated or lineated. It is dark green or greenish grey, both in fresh exposure and altered surface. It generally contains 55-80% ferromagnesian minerals, locally more in some pockets or discontinuous layers of ultramafic composition. Compositional variations characterize some outcrops where tremolite-rich ultramafic rocks, melanocratic and leucocratic gabbros coexist. These different facies may correspond to multiple intrusive phases or are the result of magmatic differentiation within a single sill. Unit pPkle3 outcrops contain locally 1-2% millimetric to centimetric quartz ± calcite veinlets. 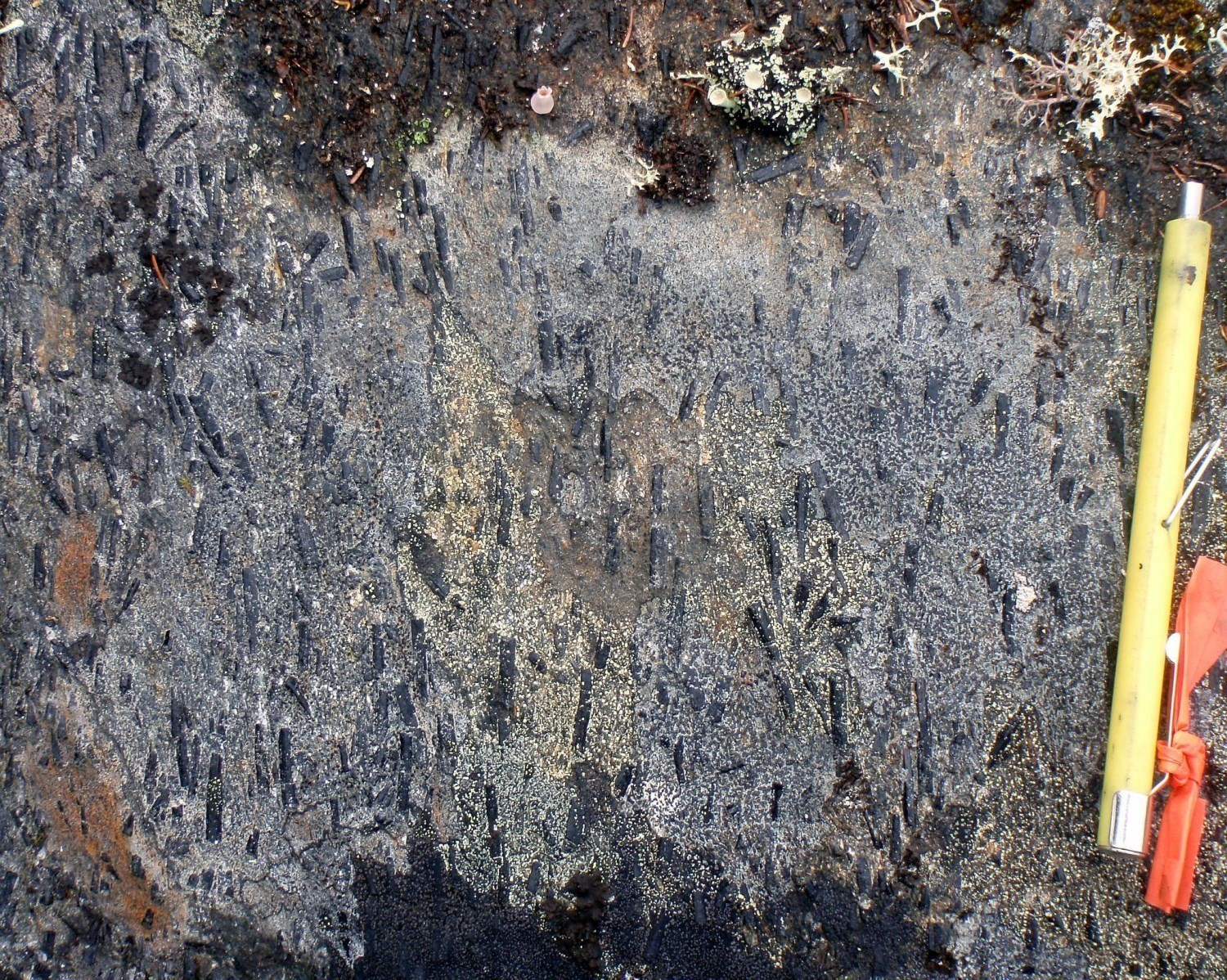 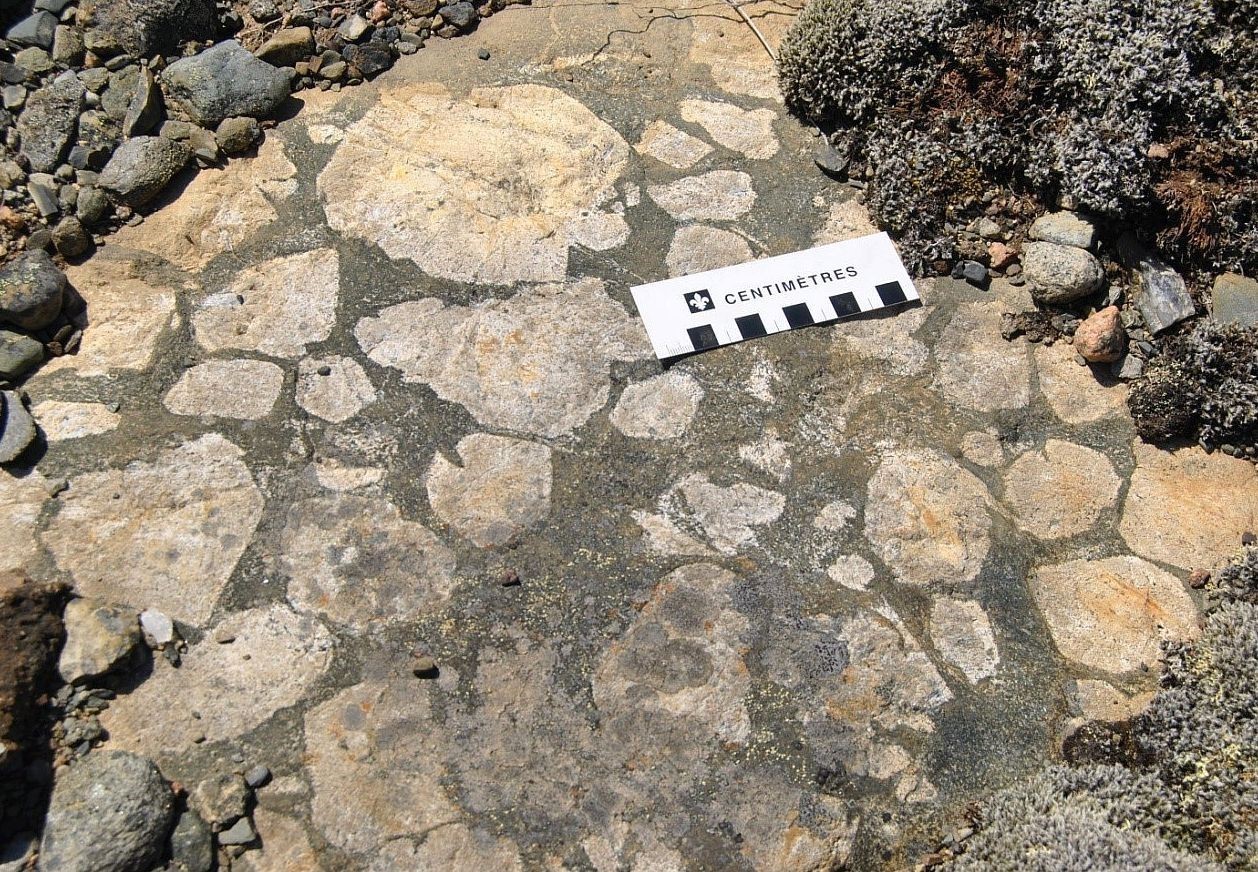 In some places, metagabbro has a glomerophyric texture defined by 10-60% whitish porphyroblasts. These represent aggregates of small plagioclase crystals containing hornblende and anthophyllite rods displaying random orientation. Deformation of these textures is variable. Slightly deformed aggregates are rounded with a diameter <4 cm. With increased deformation, they take an oval or very stretched shape in foliation and are up to 10 cm long (Gélinas, 1956). This facies had already been described east of Gabriel Lake by Gélinas (1958b) and Sauvé and Bergeron (1965). In the Labrador Trough, Sauvé and Bergeron (1965) mention the presence of spotted (glomerophyric) gabbros, which can be equivalent to Klein Suite metagabbros, at the base of volcanic sequences of the Hellancourt Formation (Sauvé and Bergeron, 1965; Wares and Goutier, 1990; Clark and Wares, 2004).

In the Jeannin Lake area (Charette et al., 2016), a subophitic gabbro intrusion was observed west of Horseshoe Lake. The intrusion, which is ~4 km by 2 km, displays alternating subophitic gabbro and partially amphibolized gabbro similar to metagabbro described above. The subophitic facies is purplish grey, slightly magnetic in places and more leucocratic than the amphibolitized facies. Ferromagnesian minerals (40-50%) consist of unaltered clinopyroxene, and olivine highly replaced by a mixture of serpentine, chlorite and actinolite.

The Klein Suite covers an area of ~1373 km2 within the Rachel-Laporte Tectonic Domain. Amphibolites of unit pPkle1 (including its subunits) is the dominant litholgy of the suite (1110 km2). They form layers and klippes up to 5 km wide, interstratified with metasedimentary units of the Freneuse Suite. Ultramafic rocks of unit pPkle2 unit and metagabbros of unit pPkle3 form hectometric to kilometric intrusions. On the eastern and northern edge of the Wheeler Complex, in the Jeannin Lake area, there are thicker amphibolite and metagabbro sequences that are nearly 10 km wide.

Rocks of the Klein Suite are commonly observed alternating with metasedimentary rocks of the Freneuse Suite. Mafic (pPkle3) and ultramafic (pPkle2) intrusions are most often conformable with layers of amphibolite (pPkle1) and metasedimentary rocks (pPfru), but sharp crosscut has been observed locally (Lafrance and Vanier, 2021).  The Klein Suite is also in fault contact with the various Archean complexes (thrust sheets) of the Rachel-Laporte Domain and Labrador Trough, namely the Boulder, Rénia, Highfall, Boullé and Wheeler complexes (Simard et al., 2013; Lafrance et al., 2014; Charette et al., 2016). The various units of the Klein Suite are locally intruded by granite and pegmatitic granite dykes or sills of the Mercier Suite.

Several authors have proposed that amphibolites of the Klein Suite are largely equivalent to volcanic rocks and sills of the Kaniapiskau Supergroup located in the Labrador Trough directly to the west (Harrison, 1952; Gélinas, 1958a, b; Sauvé and Bergeron, 1965; Simard et al., 2013). Specifically, in the northern part of the Rachel-Laporte Domain, unit pPkle1 amphibolites would be equivalent to lava and sills of the Hellancourt Formation (Sauvé and Bergeron, 1965; Clark, 1980), which is assigned to the Koksoak Group (Wares and Goutier, 1990; Clark and Wares, 2004). In the southern part, amphibolites would be partly equivalent to volcanic rocks of the Willbob and Murdoch formations (Doublet Group) recognized by Dressler (1979). Unit pPkle3 metagabbro would represent metamorphosed equivalents of intrusive rocks belonging to the Gerido Intrusive Suite (Montagnais Supersuite; Wares and Goutier, 1990; Clark and Wares, 2004), a unit consisting of mafic and ultramafic sills that have developed in different sedimentary and volcanic units of the Labrador Trough (Kaniapiscau Supergroup).

The work of Henrique-Pinto et al. (2017) rather suggests different depositional contexts between the Laporte Supersuite (Rachel-Laporte Domain) and the Kaniapiscau Supergroup (Labrador Trough). The Kaniapiscau Supergroup would have been deposited along an intraplate continental margin characterized by dominant recycled Paleoarchean sources, whereas the Laporte Supersuite would mark the transition from a continental fore-arc with a juvenile source to a sedimentation zone in the context of a collisional foreland peripheral basin (Henrique-Pinto et al., 2019). The ~1883.5 Ma age obtained in a gabbro of the Klein Suite indicates, however, that metasedimentary rocks of the Freneuse Suite (<1834 Ma; Henrique-Pinto et al., 2017) must also include an older sequence that hosted mafic sills older than 1834 Ma). It is possible that some of the rocks included in the Rachel-Laporte Domain may be rocks of the Labrador Trough that were tectonically imbricate within the Rachel-Laporte Domain (Lafrance and Vanier, 2021).