The Wheeler Complex was introduced by Dimroth (1978) to group a variety of Archean rocks forming a large dome located mainly in the Duhamel Lake (sheet 24B04) and Gachet Lake (sheet 24B03) areas, east of the Wheeler River. Charette et al. (2016) extended this unit in the Jeannin Lake area. 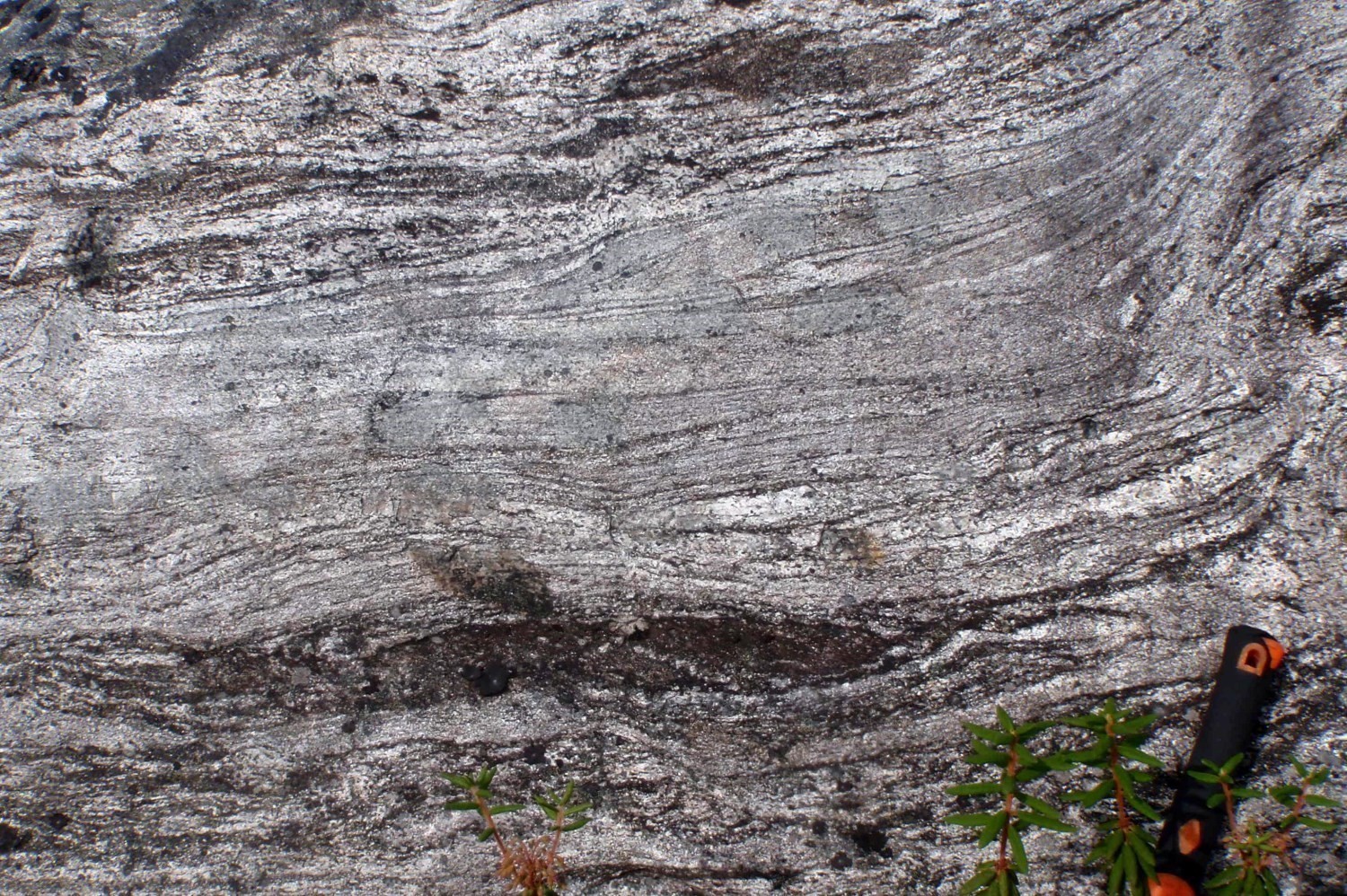 Unit nAwel1 outcrops mainly in the southern portion of the Wheeler Complex, mainly at fault edges. It appears to correspond to klippes or enclaves in the main tonalite unit of the Wheeler Complex (nAwel3). Gneiss is generally migmatized and displays alternating decimetric layers of fine-grained gneiss and slightly coarser pinkish or whitish bands millimetre to centimetre wide. Gneissic layers are grey to light grey, well foliated, non magnetic and tonalitic. They have textures indicating partial recrystallization and contain 5-20% ferromagnesian minerals, mainly green or brown biotite and, in lesser amounts, hornblende. Accessory minerals are epidote, sphene, muscovite, apatite, opaque minerals and zircon. The composition of leucocratic bands ranges from granitic to tonalitic. Biotite-rich layers that suggest diatexites are observed locally in migmatized gneiss.

The gneiss’s protolith is uncertain. Its origin may be partly igneous, similar to gneiss and migmatites of the Ungava and Qurlutuq complexes, or even sedimentary, such as migmatized paragneiss of the False Suite. Unit nAwel1 appears to correspond to the biotite-muscovite gneiss unit described by Dimroth (1978). 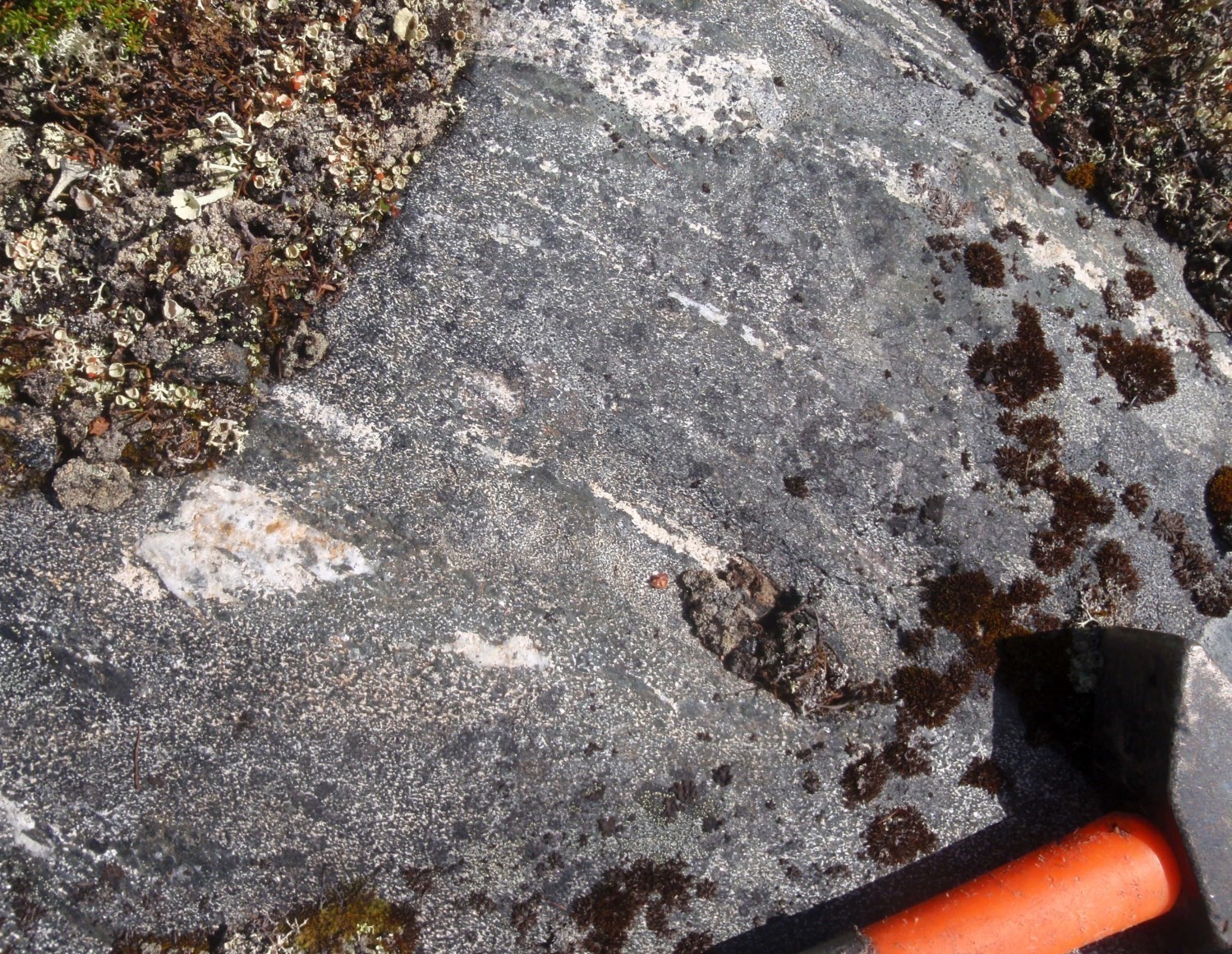 An outcrop of ultramafic rocks, whose primary minerals have been completely replaced by tremolite, chlorite, serpentine and carbonate, has also been assigned to this unit. The green rock is  medium grained. 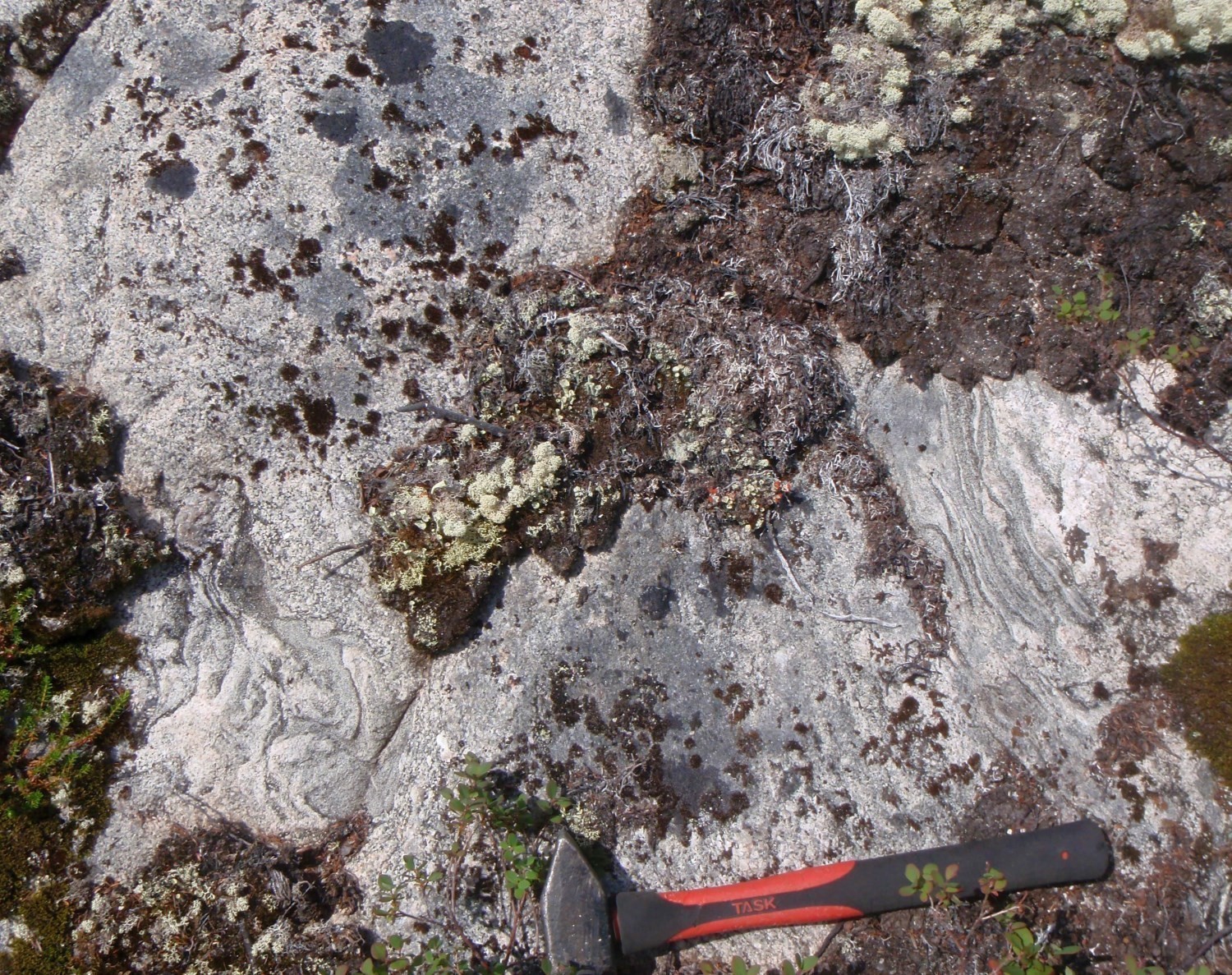 Unit nAwel3 consists of various intrusive lithologies, mainly tonalite associated with some granodiorite and quartz diorite. It is characterized by the presence, on the same outcrops, of homogeneous intrusive phases and heterogeneous phases rich in enclaves (up to 30%) and biotite schlierens, reminiscent of fairly advanced migmatitic rocks. Centimetric to metric enclaves are variably assimilated by tonalite. They vary in composition and consist mainly of granoblastic and foliated amphibolitized, gabbro, but there are also gneiss of uncertain origin, diatexites and biotite-muscovite schists. Tonalite contains up to 10% pink or white granite injections forming millimetric to centimetric clusters and bands more or less continuous and subconformable to foliation. In some areas, there appears to be a mixture of tonalite (nAwel3) and pink granite of unit nAwel4. 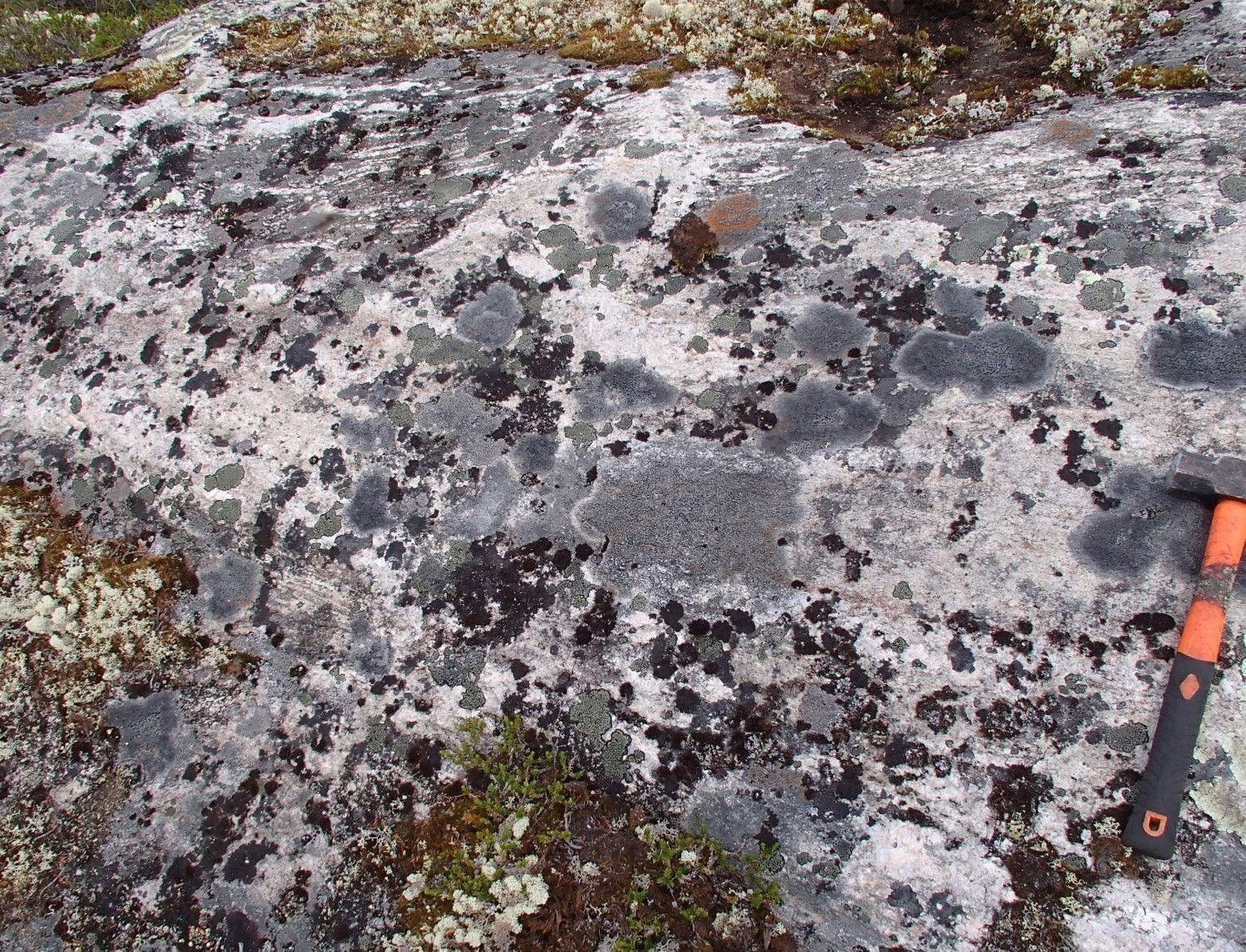 Tonalite is usually medium grained, although it can vary from fine to coarse grained. The rock is weakly to moderately foliated, white in altered surface and light grey in fresh exposure. Igneous textures are well preserved, although serrated edges and partial recrystallization are commonly observed around grain edges or in some finer-grained corridors. Foliation is generally undulating and is marked by the alignment of ferromagnesian minerals (5-20%) and enclaves or, more locally, by a slight orientation of grains forming the quartzofeldspathic matrix. 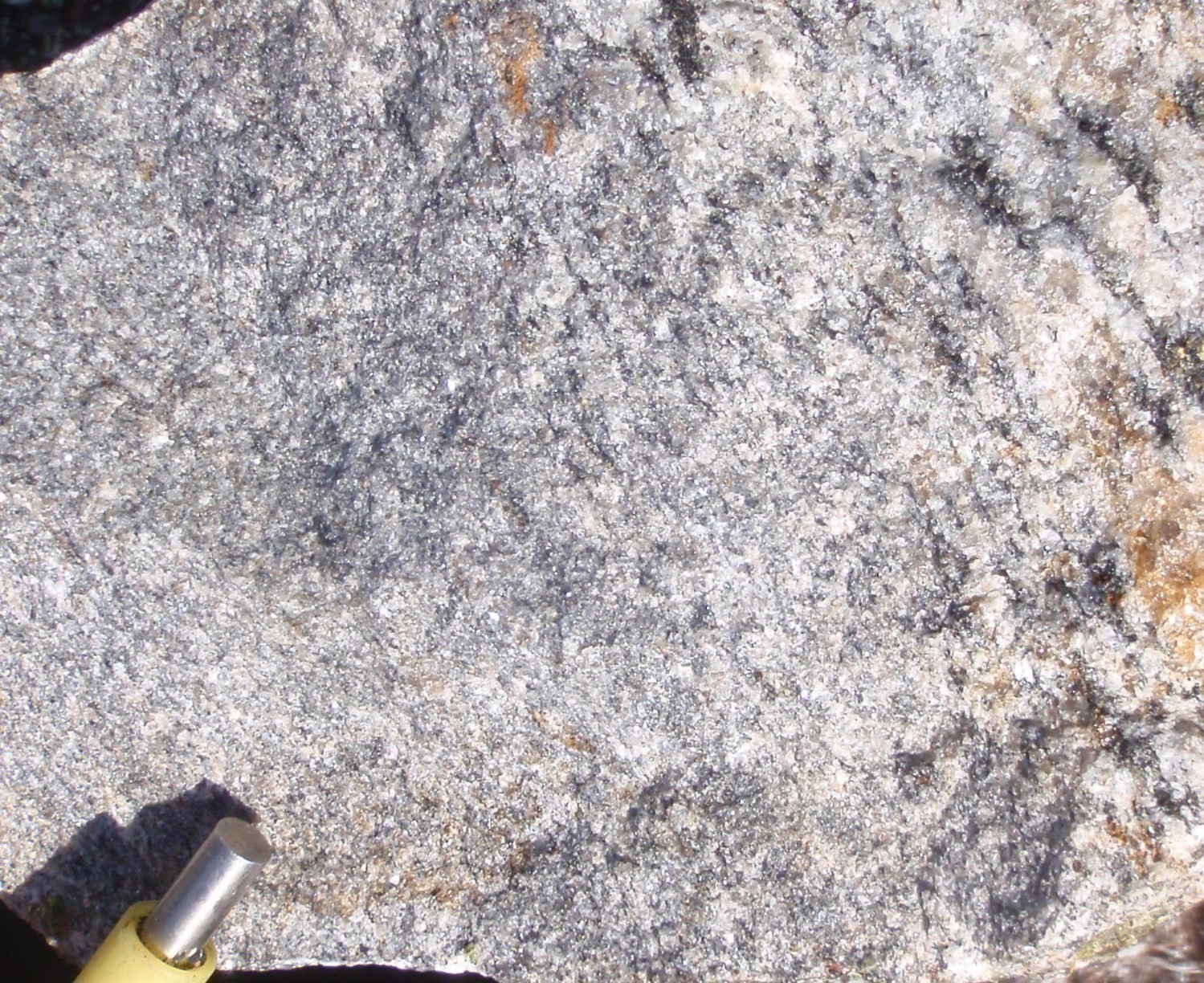 Another homogeneous tonalite facies characterized by a finer grain size and a slightly darker (grey) colour was also assigned to this unit. The contact between the two tonalite facies is unsharp and difficult to distinguish on outcrops. Mineralogical and structural characteristics of this lithology are similar to those of coarser-grained tonalite. Unit nAwel3 corresponds in part to the biotite-amphibole gneiss unit described by Dimroth (1978), which also included amphibolites similar to those of unit nAwel2. 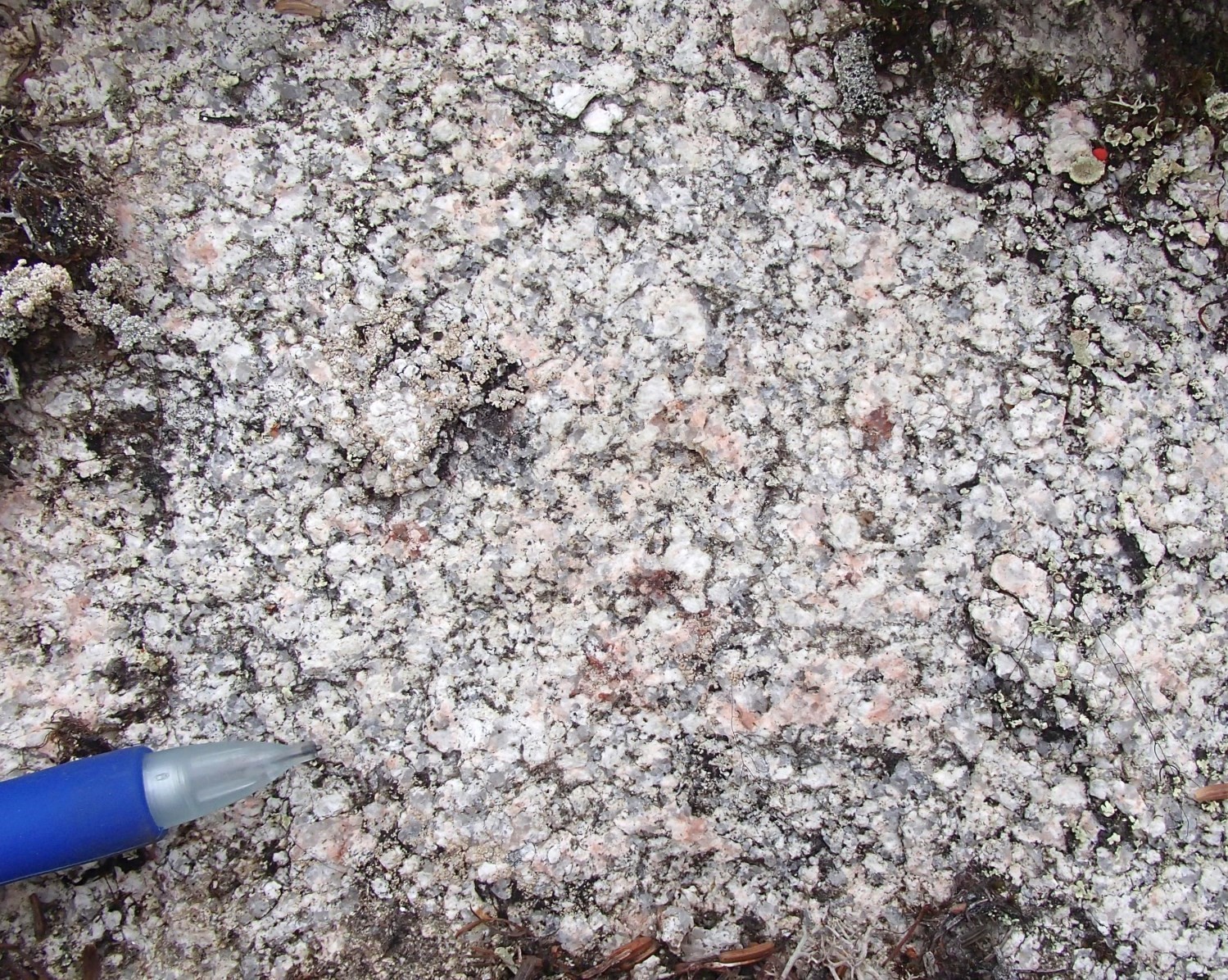 Unit nAwel4 consists mainly of granite and quartz syenite. Rocks are foliated and have a well-preserved igneous texture affected by slight recrystallization (formation of subgrains in quartz). Locally, further recrystallization is observed in thin sections with granoblastic and even-grained zones. Plagioclase is usually altered to a mixture of epidote (<5%) and muscovite, which can form large skeletal felt clusters aligned or not with foliation. The main accessory minerals are opaque minerals, chlorite, allanite, sphene and apatite. Microcline contains sericitized plagioclase inclusions. Granite is medium grained and pink or grey in fresh exposure and whitish to pinkish in altered patina. It contains 2-7% ferromgnesian minerals consisting of brown to green biotite and epidote. Quartz syenite is dark pink, locally magnetic, fine to medium grained and contains 10-20% ferromagnesian minerals. These consist of biotite, hornblende and actinolite. In addition to accessory minerals observed in granite, syenite also contains interstitial carbonates. 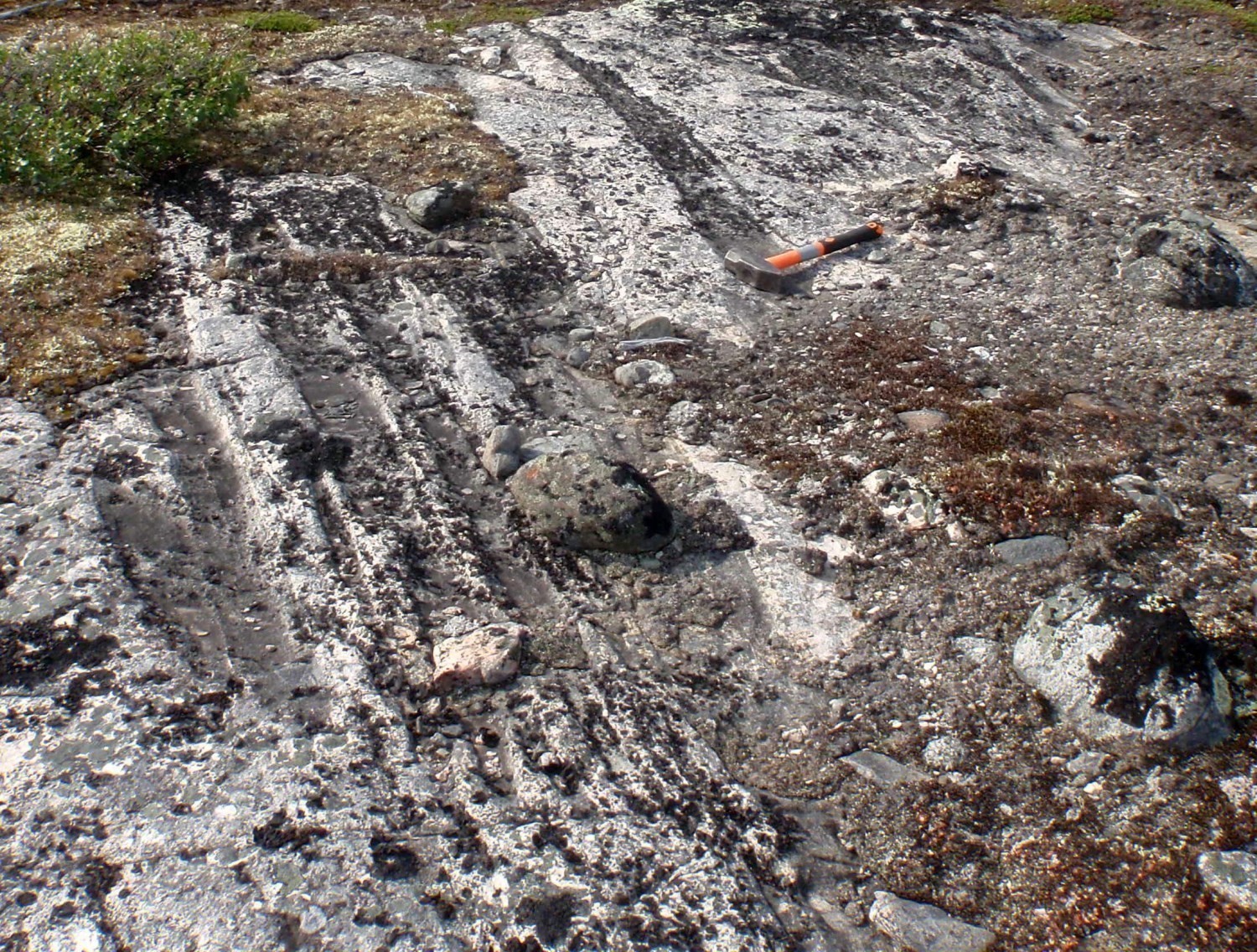 Rocks of unit nAwel4 contain in places dismembered or highly assimilated enclaves and layers of gneiss, amphibolitized gabbro and tonalite similar to those of units nAwel1 to nAwel3. These enclaves are generally centimetre to decimetre wide, locally metre wide, and give a heterogeneous appearance to outcrops.

A klippe associated with a very strong magnetic anomaly ~500 m wide by 8 km long was assigned to this unit in the Jeannin Lake area (Charette et al., 2016). The rock is composed of hornblende, grunerite, plagioclase, garnet, biotite and magnetite. Chlorite and apatite are also quite abundant. It is likely a silicate facies iron formation, but the possibility that this unit could represent an iron alteration zone within a mafic intrusion cannot be excluded.

The Wheeler Complex is located in the west-central portion of the Jeannin Lake area (Charette et al., 2016), where it forms a thrust sheet ~60 km long by 20 km wide in the Labrador Trough, at the boudary with the Rachel-Laporte Lithotectonic Domain. Unit pPwel3 is the main unit of the Wheeler Complex, with other units forming hectometre to kilometre-wide klippes or intrusions within it.

The Wheeler Complex consists of Archean rocks circumscribed to a thrust sheet from the Archean basement which would have been emplaced on Paleoproterozoic volcano-sedimentary rocks of the Labrador Through during the New Quebec Orogenesis. It is therefore in fault contact with volcano-sedimentary rocks of the Laporte Supersuite to the east, and Kaniapiscau Supergroup to the west.