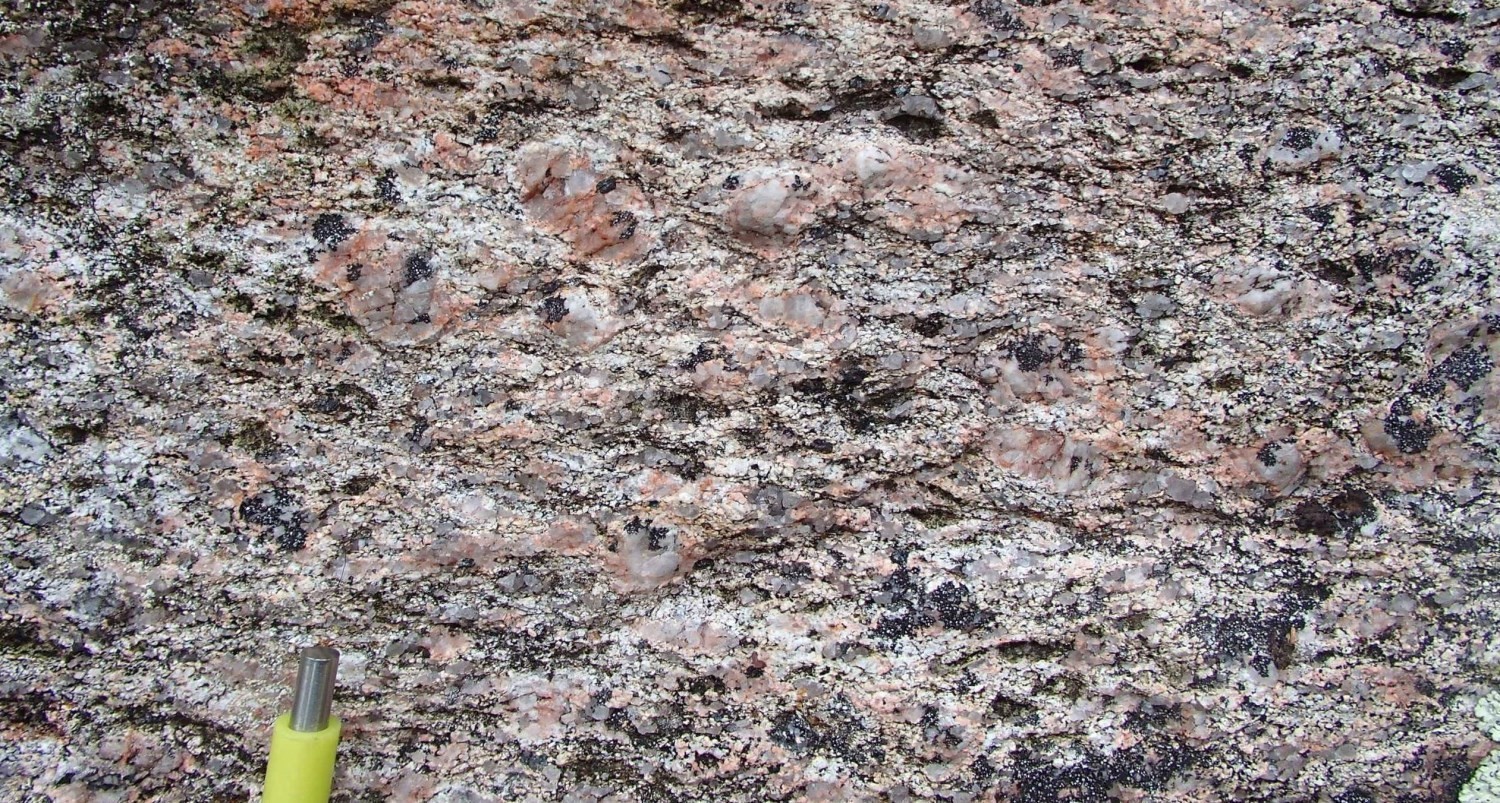 The Highfall Complex was defined by Lafrance et al. (2014) in the Saffray Lake area (sheet 24G) to group potassic intrusions circumscribed to a thrust sheet of the Rachel-Laporte Lithotectonic Domain (Lafrance and Vanier, 2021). Thus, it is more precisely a structural complex. Clark (1980) had also described greyish and pinkish granitic intrusions in the area, having or not an augen texture. 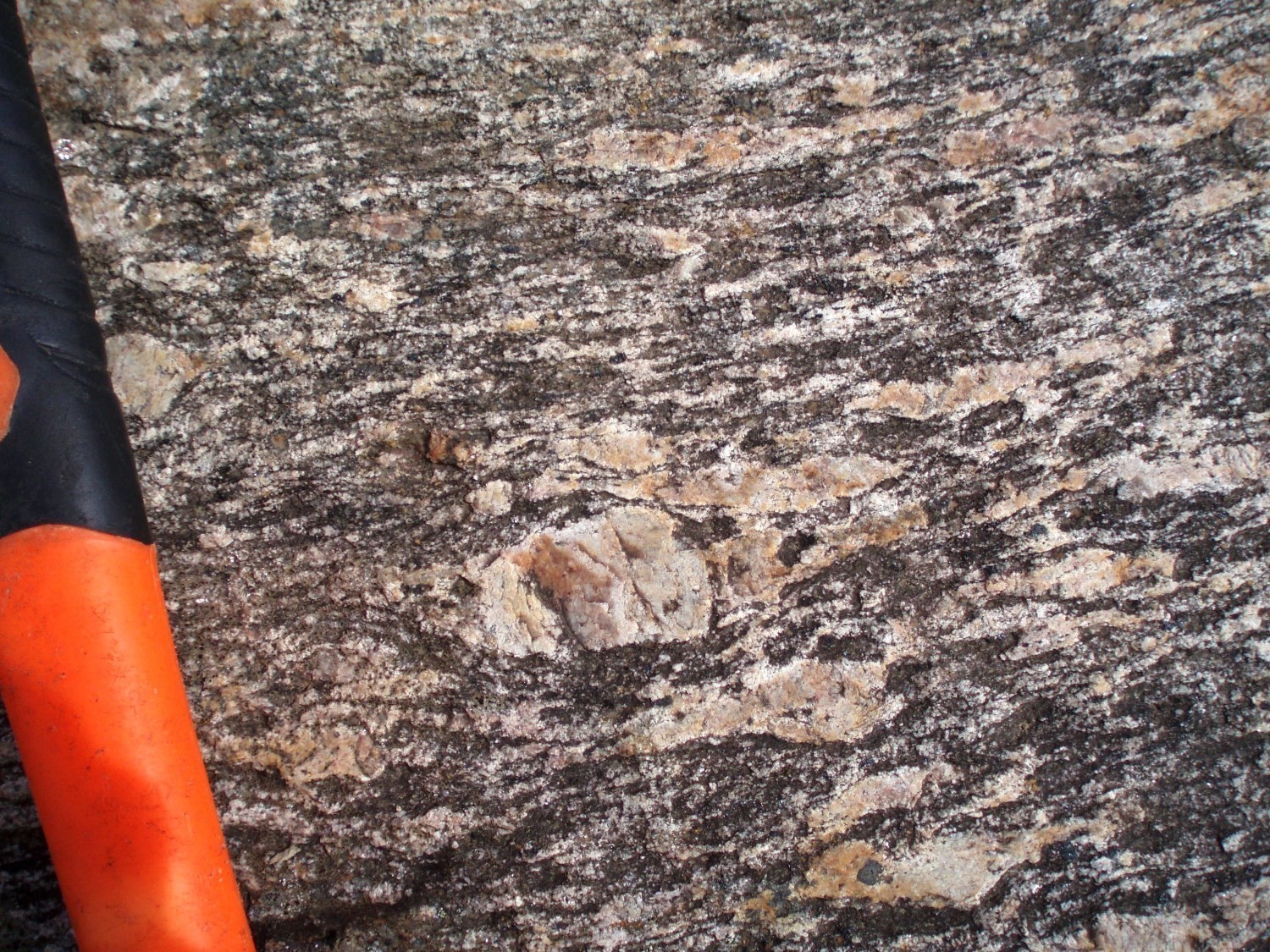 Porphyraceous rocks of unit nAhig1 are homogeneous, very well foliated and have a high magnetic susceptibility. They are greyish, medium to coarse grained, and contain 10-30% pink K-feldspar phenocrystals 0.5-3 cm. Phenocrystals are partially recrystallized and very well aligned in foliation. In places, they are highly stretched and appear as discontinuous bands. Ferromagnesian minerals (10-25%) commonly combine into lenticular clusters a few millimetres wide, composed mainly of brown to green biotite with lesser amounts of hornblende (4-6%), epidote (2-4%) and magnetite (1-3%). Accessory minerals (3-6%) are usually attached to ferromagnesian mineral clusters and consist of sphene, apatite, allanite, muscovite and small zircon grains as inclusions in biotite. Sericite, carbonates and epidote are alteration minerals observed in feldspar crystals. 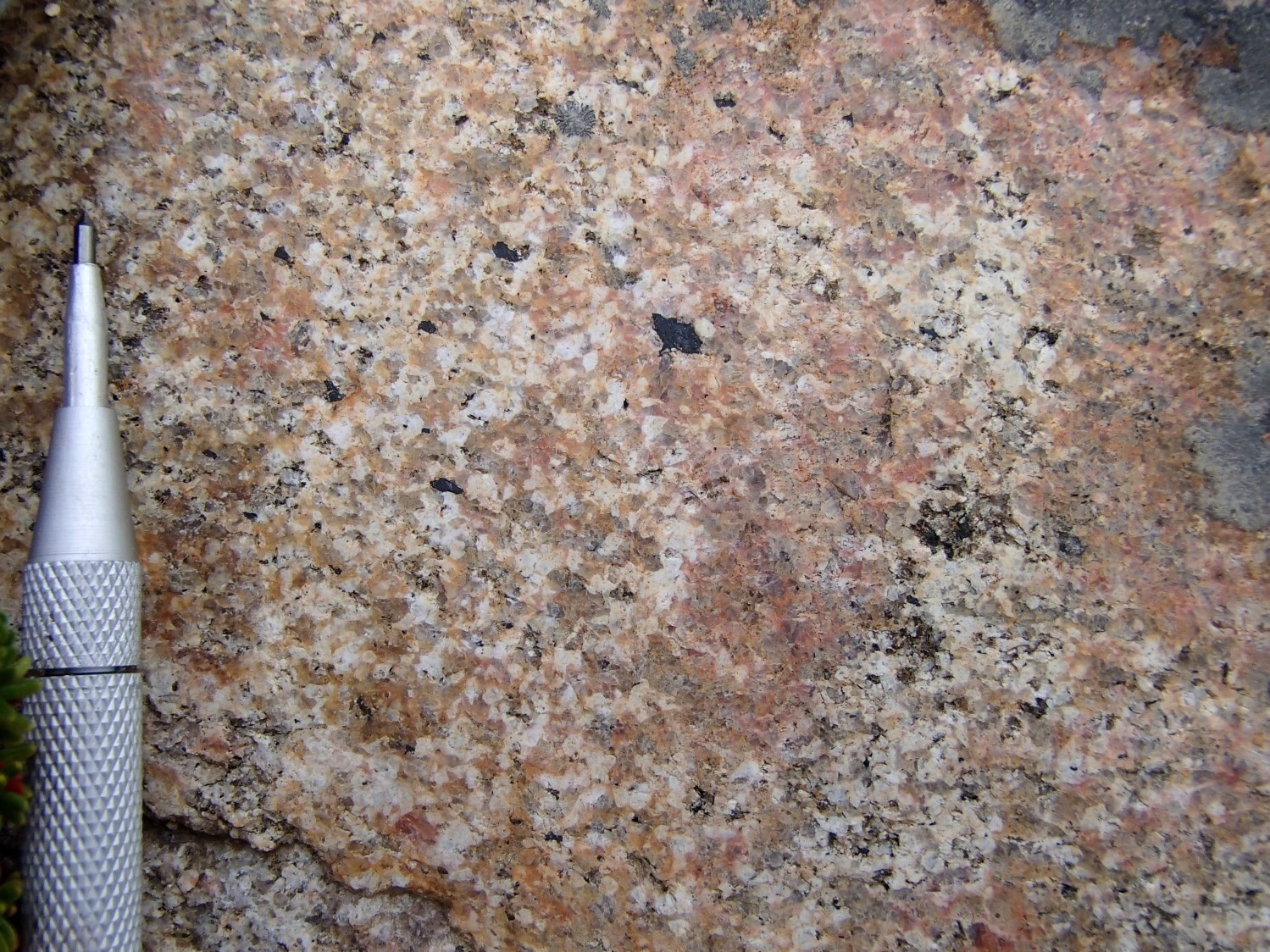 Unit nAhig2 granite is the youngest phase of the Highfall Complex. It contains decimetric to metric enclaves of other units of the complex and occurs as centimetric to metric injections within unit nAhig1. Granite is pinkish, medium grained, even grained and well foliated. Quartz, microcline and plagioclase contents are similar. Granite contains 2-12% ferromagnesian minerals consisting of brown biotite, locally chloritized, with some hornblende, epidote and fine magnetite. Accessory minerals are the same as in unit nAhig1, but in smaller amounts. 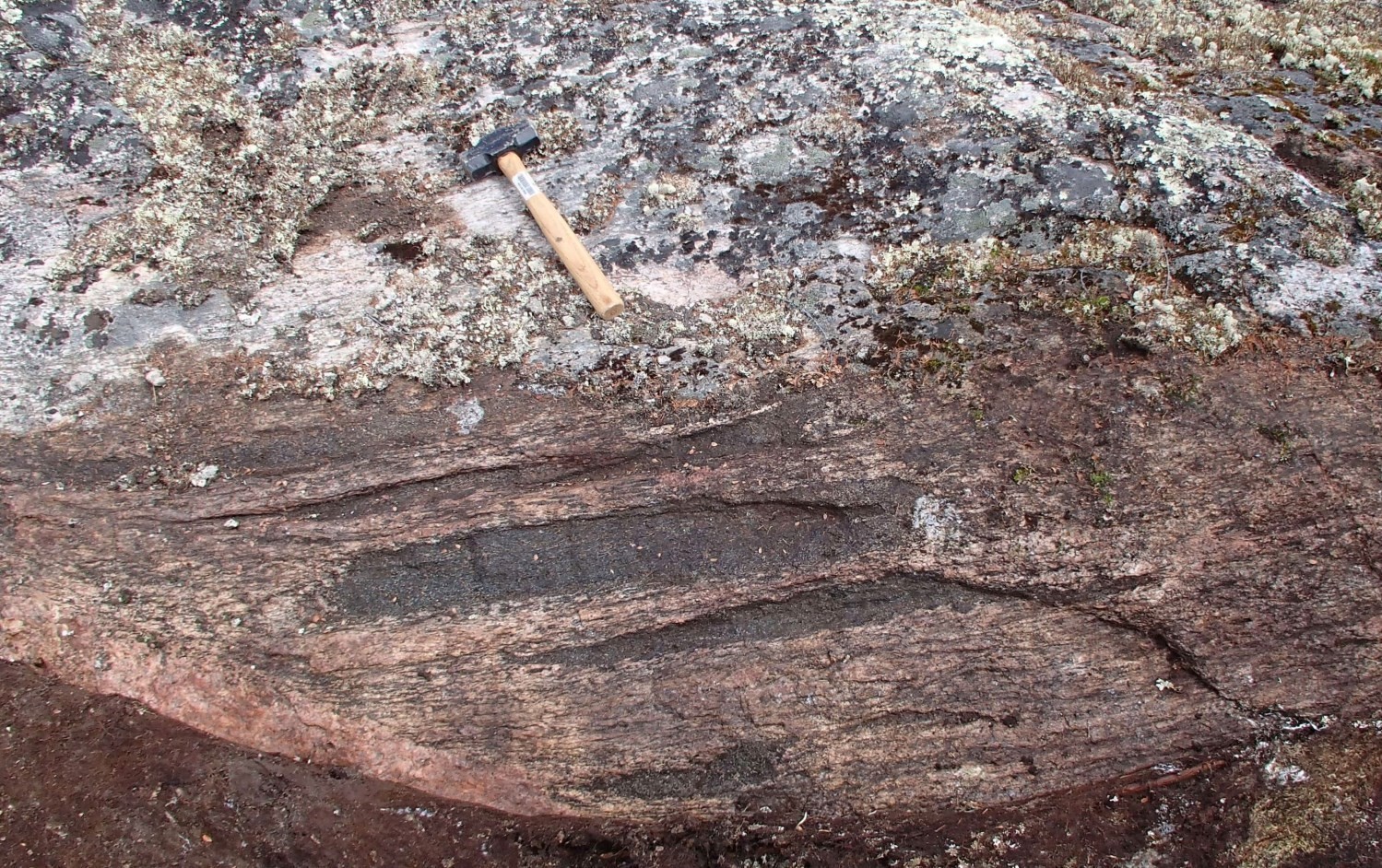 Potassic rocks of units nAhig1 and nAhig2 contain boudinaged enclaves, centimetre to metre-wide, of melanocratic rocks stretched parallel to foliation. Some of these enclaves form klippes of significant width compiled from the work of Clark (1980) and assigned to unit nAhig3. This author describes these klippes as consisting of amphibolitized, foliated, fine to medium-grained diorite and gabbro, composed mostly of plagioclase with some biotite.

The Highfall Complex is located in the NW part of the Saffray Lake area (Lafrance et al., 2014), where it forms a thrust sheet ~35 km long by 12 km wide elongated in a NW-SE direction within the Rachel-Laporte Lithotectonic Domain. It covers an estimated area of 447 km2.

The Highfall Complex is part of a large thrust sheet separated in half by a thrust fault delineating two complexes: the Rénia Complex in the north and the Highfall Complex in the south. This sheet is composed of rocks that would originate from the Archean basement, and would have been emplaced within Paleoproterozoic volcano-sedimentary rocks of the Rachel-Laporte Lithotectonic Domain during the New Quebec Orogenesis (1.82-1.77 Ga; Machado et al., 1989). It is therefore in fault contact with Laporte Supersuite units. The northern section of the sheet is interpreted as having partially overthrusted the southern section towards the end of deformation.