The Lac Olmstead Fault (FAolm) was originally identified, named and delineated by Goulet (1987, 1995) who interpreted it as the boundary between the Rachel-Laporte Domain to the west and the Baleine Domain to the east. As proposed by Poirier (1989) and Perreault and Hynes (1990), Simard et al. (2013) extended the Rachel-Laporte Domain to the east, with the FAolm becoming a fault within it. However, an Archean age obtained in a tonalitic gneiss located directly east of the FAolm, now assigned to the Ungava Complex, prompted Lafrance et al.. (2020) to reposition the boundary between the domains at the level of the FAolm, at least in the northern part of the Southeastern Churchill Province (SECP). The LacTurcotte Fault (FAtur) thus joins the FAolm in the Diana Lake area (NTS sheet 24K06).

The Lac Olmstead Fault is part of a system of large relay faults that mark the boundary between the Rachel-Laporte and Baleine lithotectonic domains, to the west and east respectively. It represents this boundary in the NW part of the SECP, as far as the southern end of Olmstead Lake (sheet 24K06), where the FAtur takes over. There, the distance between the two faults is ~3 km. They are parallel for ~65 km, after which the FAolm joins the FAtur. The FAolm outcrops in several places over a total length of 242 km. Poirier (1989) mentions that it corresponds to a deformation corridor ~1 km wide.

In the SECP, the FAolm affects rocks on either side of this structure, along the western edge of the Baleine Domain and the eastern edge of the Rachel-Laporte Domain. Units affected are the Ungava Complex and the Akiasirviup and Ralleau suites in the Baleine Domain, and the Freneuse and Klein suites in the Rachel-Laporte Domain. 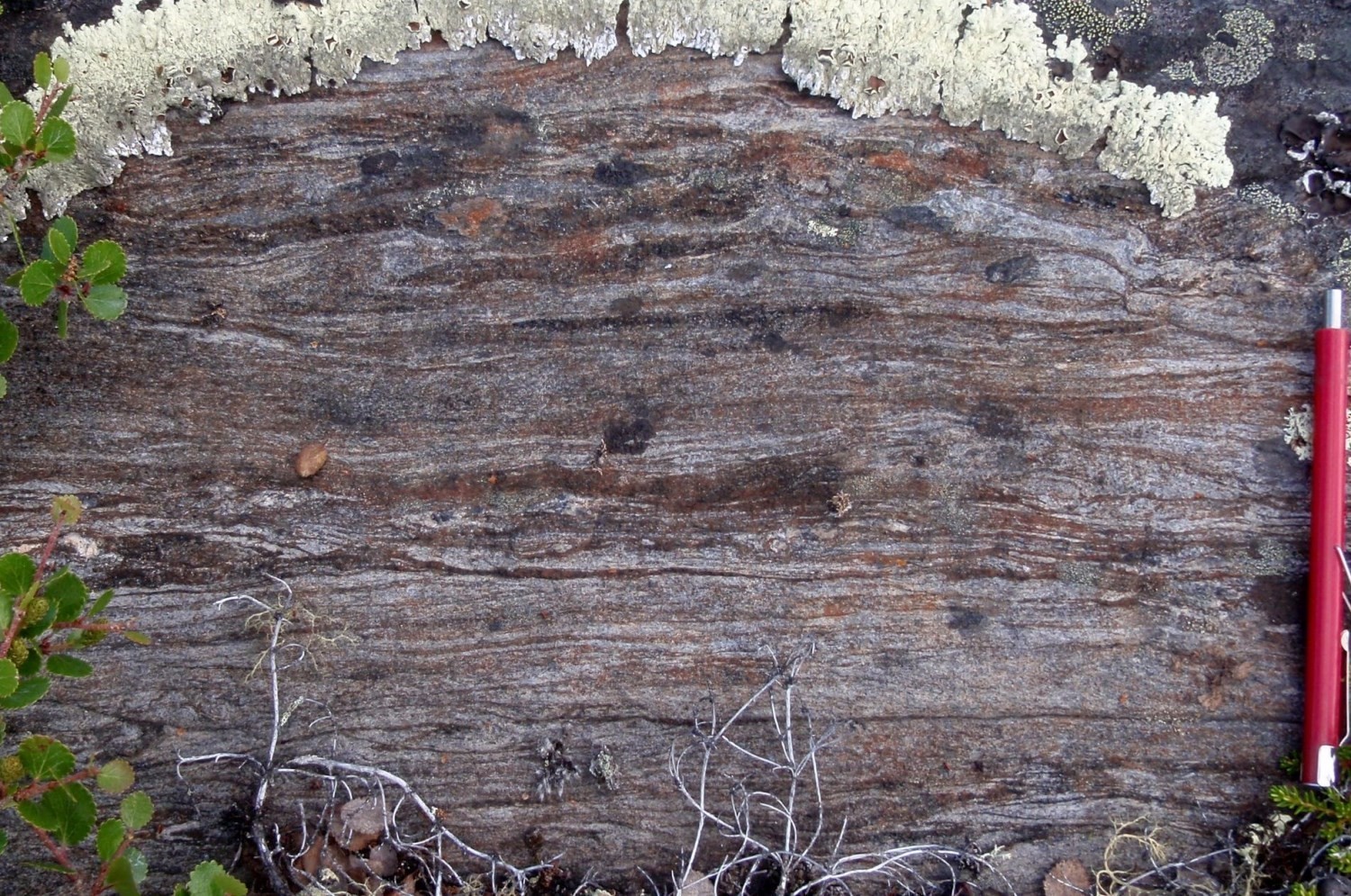 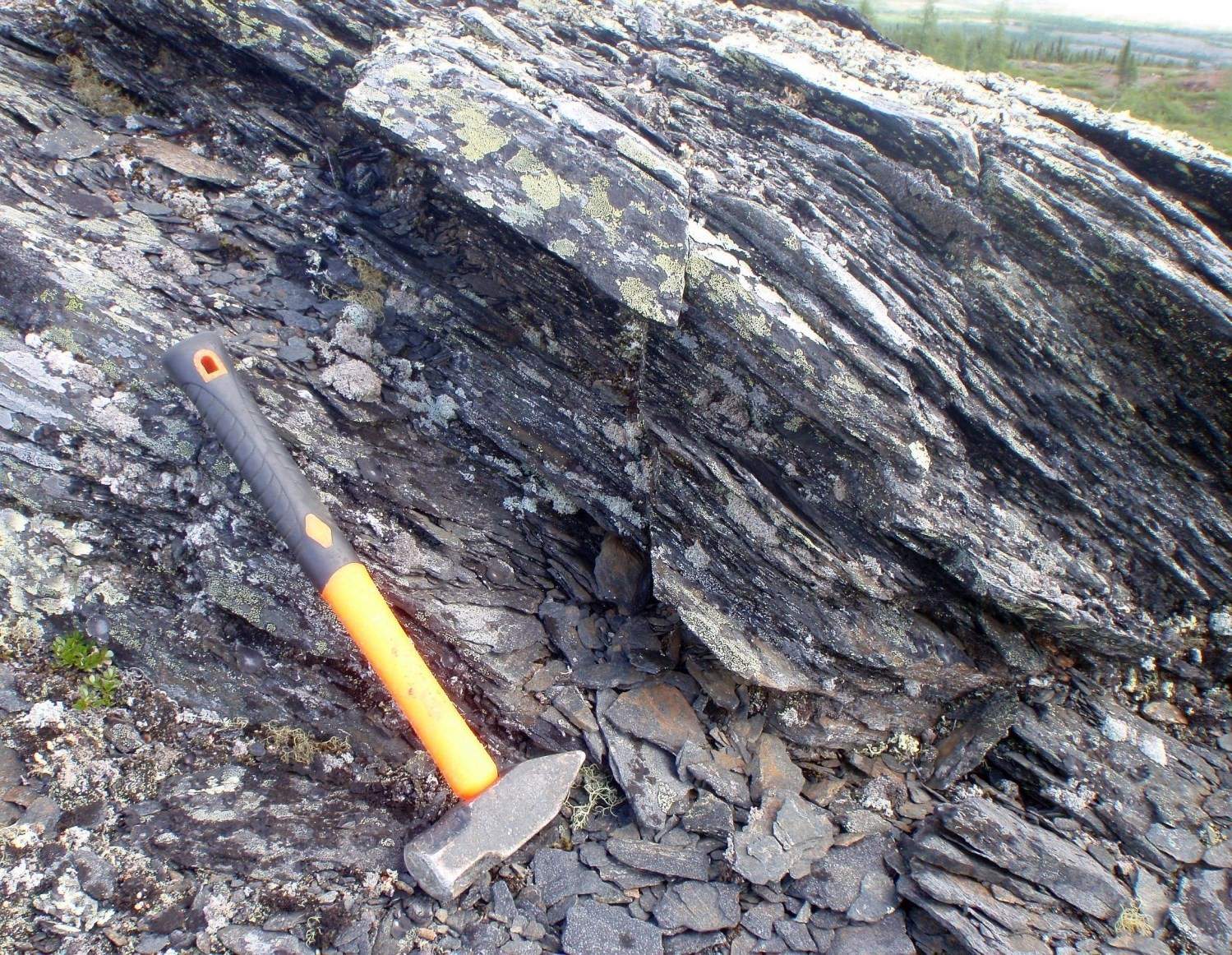 The FAolm’s main fabric is represented by planes of secondary tectonometamorphic mineral foliation Sn. This fabric is commonly folded due to a subsequent deformation phase (Poirier, 1989). The general orientation of the fault is generally NNW-SSE. As with other thrust faults (Gabriel, Lac Hérodier, Pingiajjulik, Pointe Reef Rachel and Lac Turcotte ) in the western part of the SECP, the FAolm would be associated with an early NW-verging thrust phase and then folded during a subsequent deformation phase (Clark and Wares, 2004). Paraschist and amphibolite units of the Freneuse and Klein suites commonly exhibit slate flow in the vicinity of the FAolm. The foliation commonly displays undulations on either side of the fault. 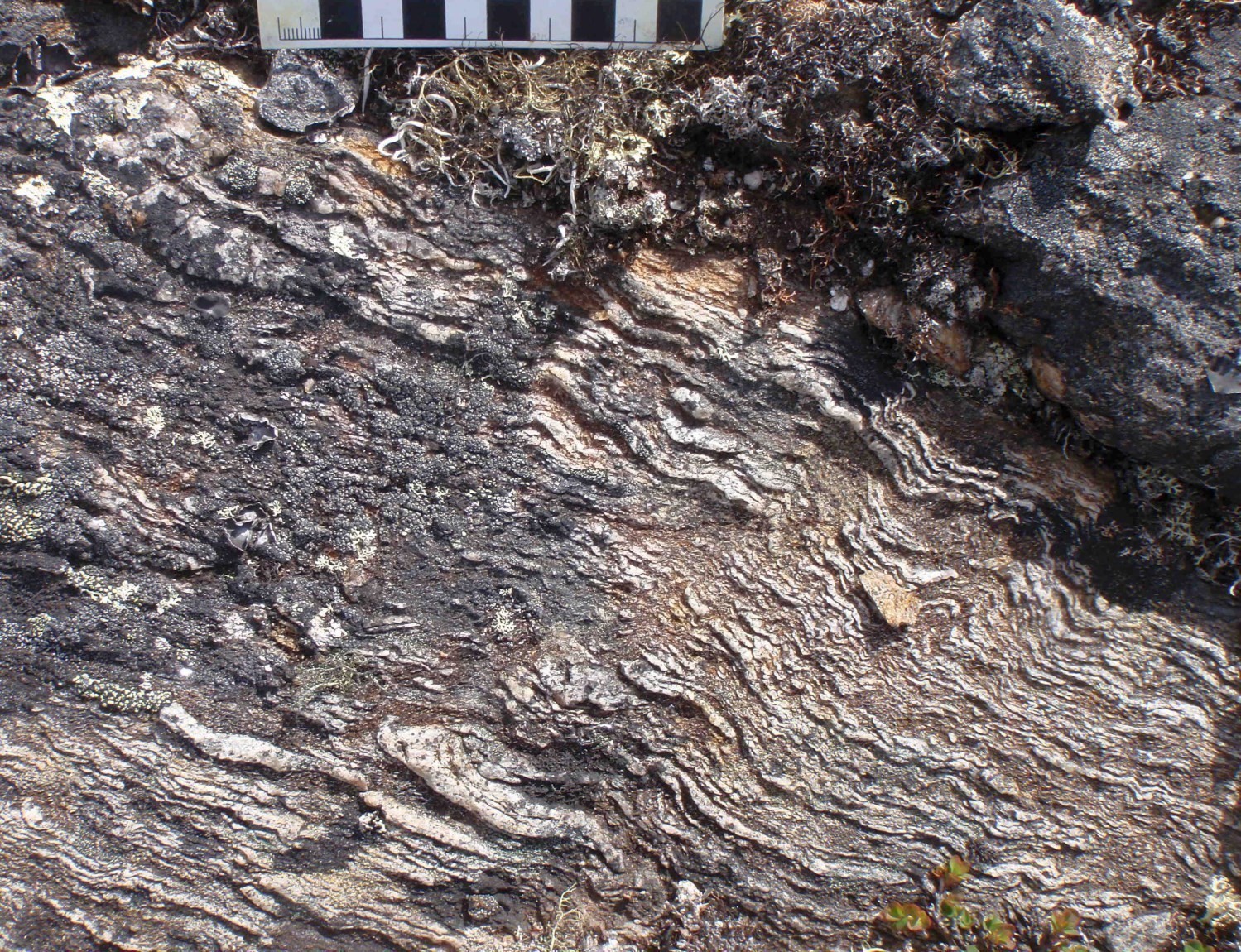 Centimetric to metric layers of mylonite and protomylonite were locally observed along the FAolm. These more deformed layers present a  protomylonitic or mylonitic planar fabric containing locally a subhorizontal stretch lineation towards the east or ESE. However, the number of lineation measurements is insufficient for structural analysis. At outcrop 12-SB-2022, the reverse movement observed is associated with a fault plane. Mylonite units commonly contain feldspar porphyroclasts, stretched sillimanite (fibrolite) nodules, porphyroblasts with recrystallization tails, quartz rods and bands or C/S fabrics. Dismembered and boudinaged quartz veins are also noted.

Clark and Wares (2004) attribute the development of large open NW-SE folds having shallow plunges to the SE to a late dextral strike-slip movement along large thrust faults associated with the New Quebec Orogen. Overturned folds associated with thrusting of the Baleine Domain on the Rachel-Laporte Domain during the New Quebec Orogenesis were also described by Moorhead and Hynes (1990) in the Rénia Complex (Rachel-Laporte Domain). These folds would subsequently have been repeated by the second phase of folding associated with the dextral strike-slip movement described above. 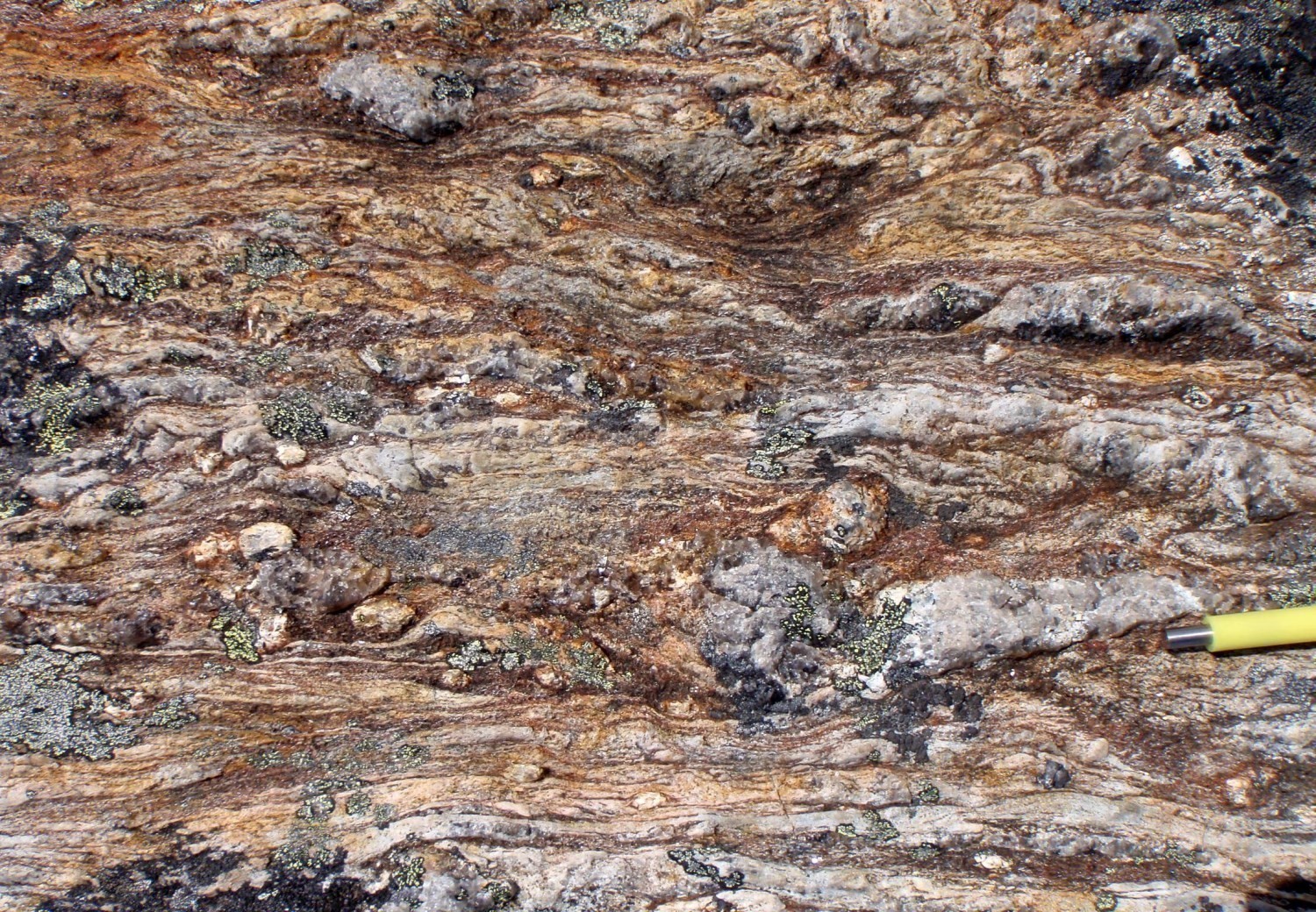 Like the FAtur, of which it represents the extension towards the NW, the FAolm generally marks a boundary between a less metamorphosed domain in the west and the attainment of anatexis conditions in the east (Charette et al., 2016; Godet et al., 2020a). Geothermobarometric work indicates temperature conditions of ~600°C on the west side of the fault, and ~700°C on the east side, with pressure conditions of ~8 kb (Perreault et al., 1987). This work thus indicates that along the FAolm, rocks of the Rachel-Laporte Domain are metamorphosed to the mid-amphibolite facies, whereas those of the Baleine Domain are at the limit between the upper amphibolite and granulite facies.

These results are comparable to those obtained further south, on either side of the FAtur, by Godet et al. (2020). There, the pressure and temperature conditions during the metamorphic paroxysm are 650°C and 0.76 GPa in the Rachel-Laporte Domain, whereas they are 790°C and 0.72 GPa in the Baleine Domain.

Silicification and carbonization zones, as well as numerous metric to decametric rusted zones have been described in the vicinity of the ZCtur. It is possible that these are late compared to the movement of the FAolm.

The FAolm corresponds to a more or less sharp, undulating magnetic lineament on the regional aeromagnetic map.

Since it represents the continuity of the FAtur, it can be considered that the FAolm would have acted as a tectonometamorphic discontinuity between the two lithotectonic domains from ~1830 Ma to 1800 Ma (Godet et al., 2020). During this period, westward thrusting of the Baleine Domain on the Rachel-Laporte Domain led to isothermal decompression of the former and amphibolite facies burial of the latter. 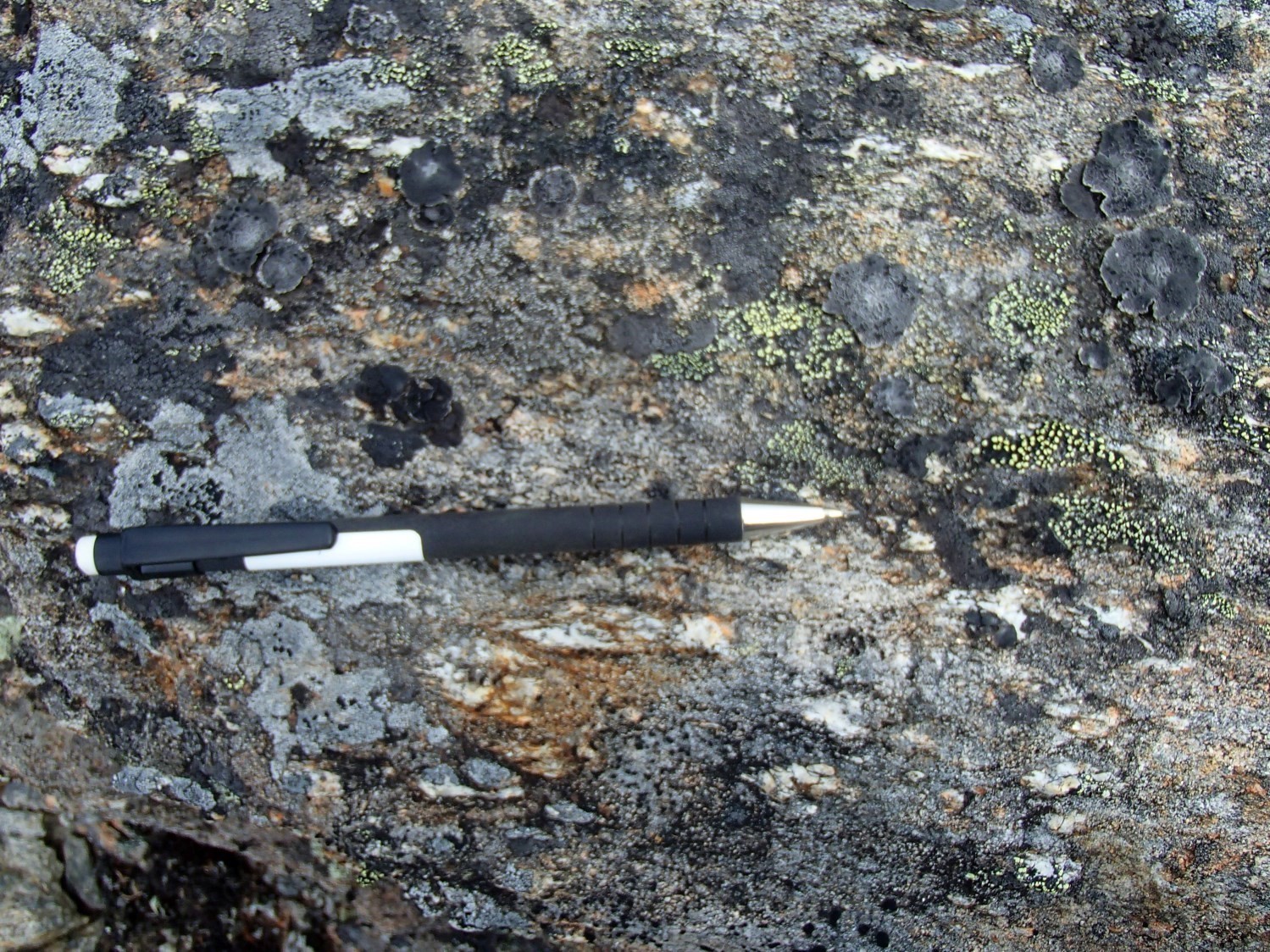 The presence of deformed fibrolite nodules within C/S fabrics, which are undeformed at greater distances from the fault, suggests that the movement of the fault is synchronous, or late, at the metamorphic peak (Poirier et al., 1989). Recent dating indicates burial of metasedimentary rocks in the Rachel-Laporte Lithotectonic Domain – located west of the Baleine Domain – under conditions of average crustal thickness at ~1804 Ma (Godet et al., 2020). This episode of thrusting and crustal thickening appears to predate the final dextral strike-slip movement, which would have occurred between 1793 Ma and 1783 Ma (Machado et al., 1989; Clark and Wares, 2008).