The Bouchette Structural Domain was defined following a geological mapping survey conducted by Moukhsil and Daoudene (2019) in the Commissaires Lake area (NTS sheets 32A01, 32A02, 32A07 and 32A08), southwest of Lake Saint-Jean.

The stratigraphic units present in the Bouchette Structural Domain are:

Most outcrops in the Bouchette Structural Domain feature a main planar fabric. It consists of a tectonometamorphic foliation that is mainly expressed by migmatitic banding, gneissosity or simply a diffuse mineral preferential orientation in metasedimentary rocks of the Barrois and Wabash complexes, as well as in intrusive rocks of the Thaddé, Marianne and Rodez plutonic suites. On the map, measurements of this foliation seem to be continuous from one outcrop to another, and foliation trajectories are superimposed on most magnetic lineaments. This led us to attribute almost all measurements of this foliation to Sn. In the event that fabrics related to at least one earlier deformation phase (Dn-1) are later recognized in the Bouchette Structural Domain, the Sn foliation discussed here corresponds to time phase 2 measurements in “geofiches”. In addition, some outcrops indicate a post-Sn foliation, which is referred to as Sn+1 in the rest of this record. 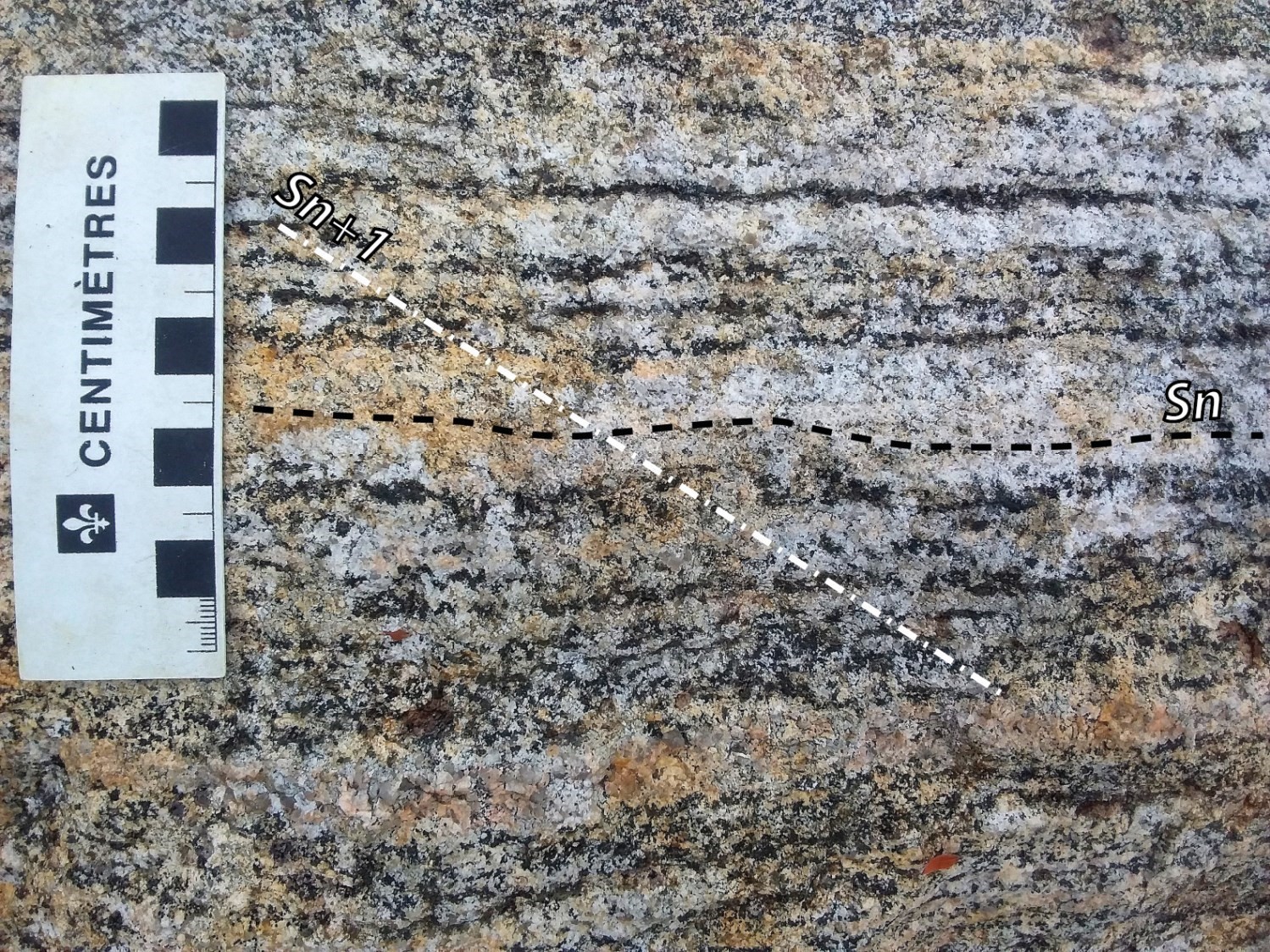 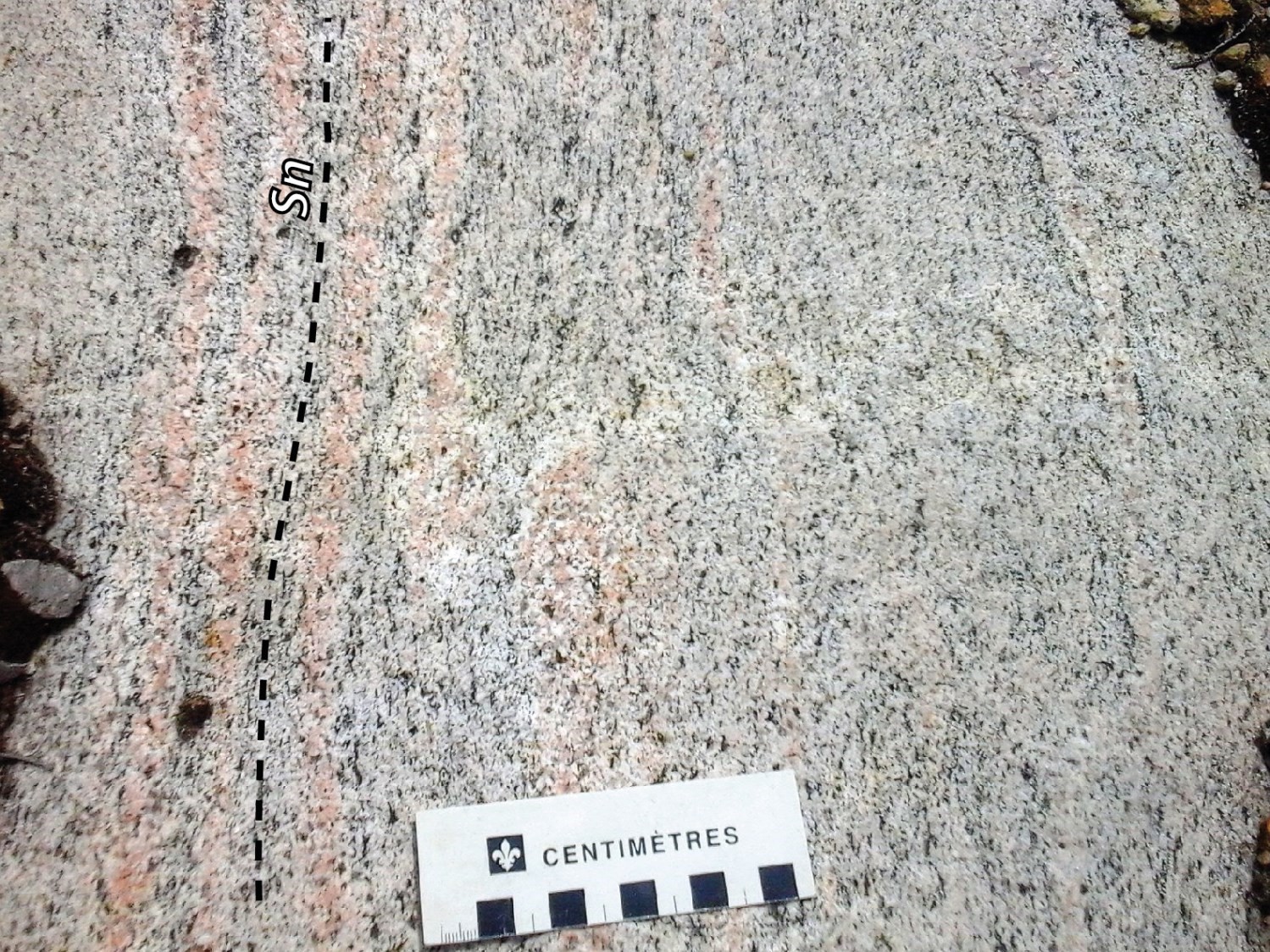 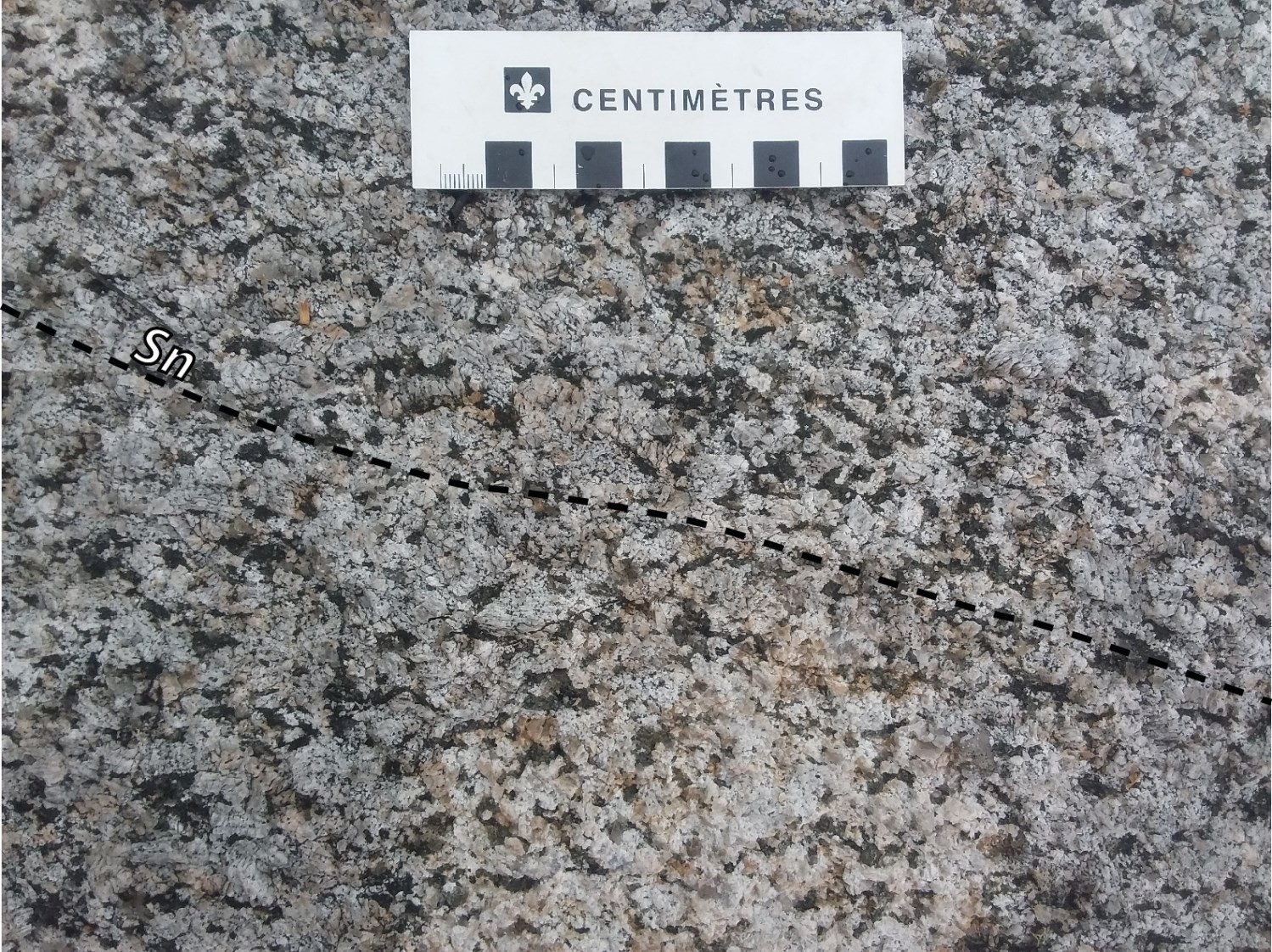 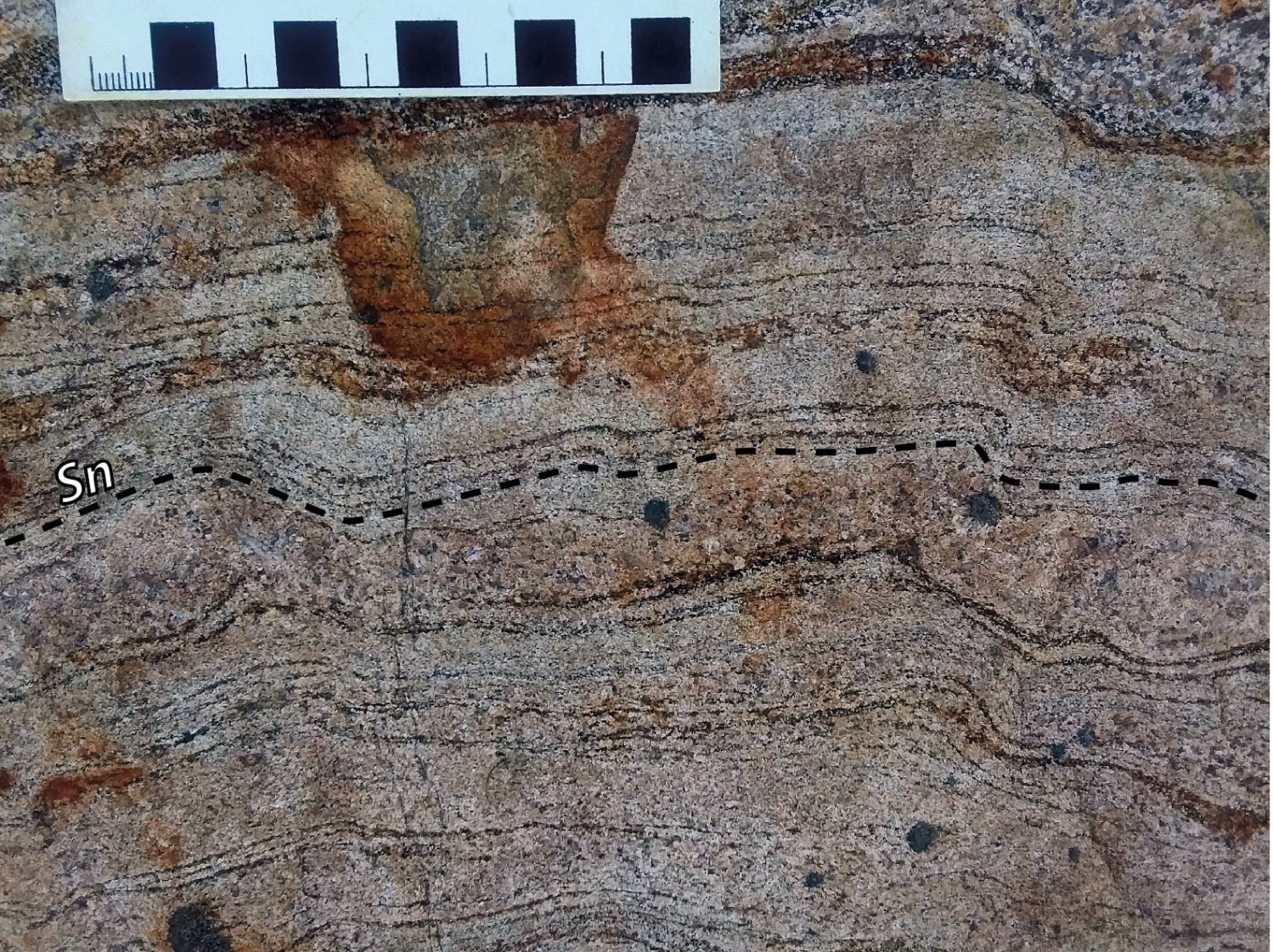 The Bouchette Structural Domain is characterized by a regional penetrative Sn foliation. This foliation affects most lithostratigraphic units, but it is expressed in different ways. In metasedimentary rocks of the Wabash and Barrois complexes, this foliation consists of migmatitic banding or gneissosity caused by alternating millimetric to centimetric leucocratic and mesocratic to melanocratic bands. The same type of fabric can be observed in the Bardeau Plutonic Suite. On the other hand, in intermediate to felsic intrusive rocks (mangerite, syenite and charnockite among others) of the Marianne, Rodez and Thaddé plutonic suites, the Sn fabric occurs as a continuous diffuse foliation, highlighted by the more or less intense preferential orientation of ferromagnesian mineral clusters. In some places, the Sn foliation is even marked by the preferential orientation of feldspar phenocrystals, while the matrix is not deformed. This suggests that the Sn foliation is partly magmatic in plutonic suites. On the other hand, it seems to be more developed along the edges of intrusions, where it becomes gneissic. In this case, quartz grains are locally flattened.

Numerous measurements of the Sn foliation have been collected throughout the Bouchette Structural Domain. The stereographic projection of these measurements clearly shows that the Sn foliation has a fairly variable attitude. However, a majority of data shows submeridian orientation and moderate eastward﻿ dip. A mean plane was calculated with an azimuth of 018° and a dip of 32°. The map displaying the attitude of Sn foliation measurements highlights the variability of the data, likely associated with several phases of folding. Indeed, Sn foliation trajectories interpreted from structural data and geophysical lineaments, inferred from the area’s high-resolution magnetic field map (Intissar and Benahmed, 2015), are mostly curvilinear and draw local kilometric fold hinges. 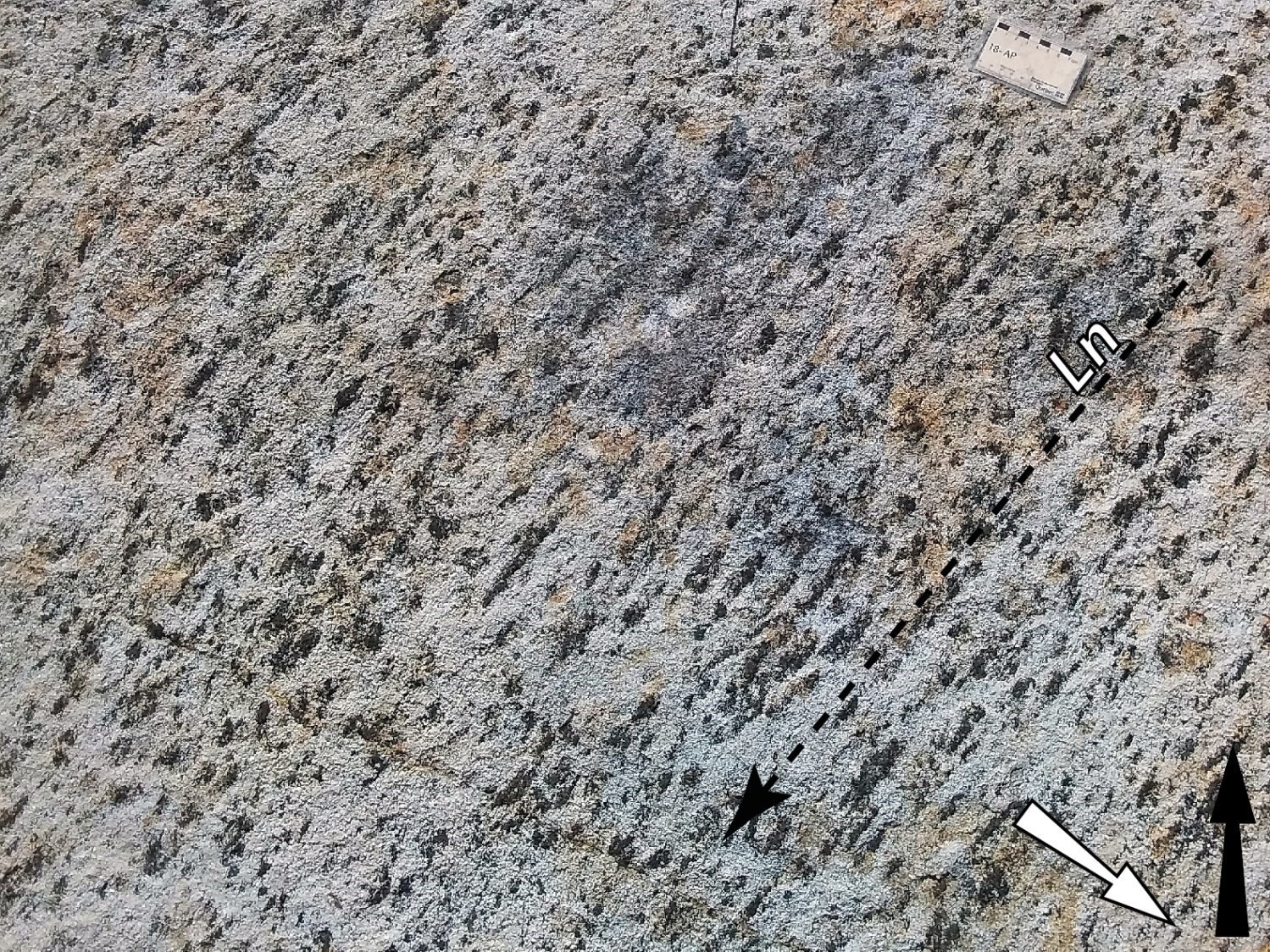 The Sn foliation carries a mineral lineation variably expressed, locally a stretch lineation. In intrusive rocks of the Marianne, Rodez and Thaddé plutonic suites, it is generally well developed along the edges of intrusions and is expressed by the preferential alignment of ferromagnesian mineral clusters along parallel lines between them. The attitude of this lineation is highly variable on the stereographic projection of measurements, since the foliation that carries it has likely been folded several times. The Ln lineation often shows a high-angle orientation of the plane azimuth. The vast majority of measured lineations plunge moderately to steeply eastward. An Ln mean lineation with an azimuth of 90° and a dip of 65° was calculated. 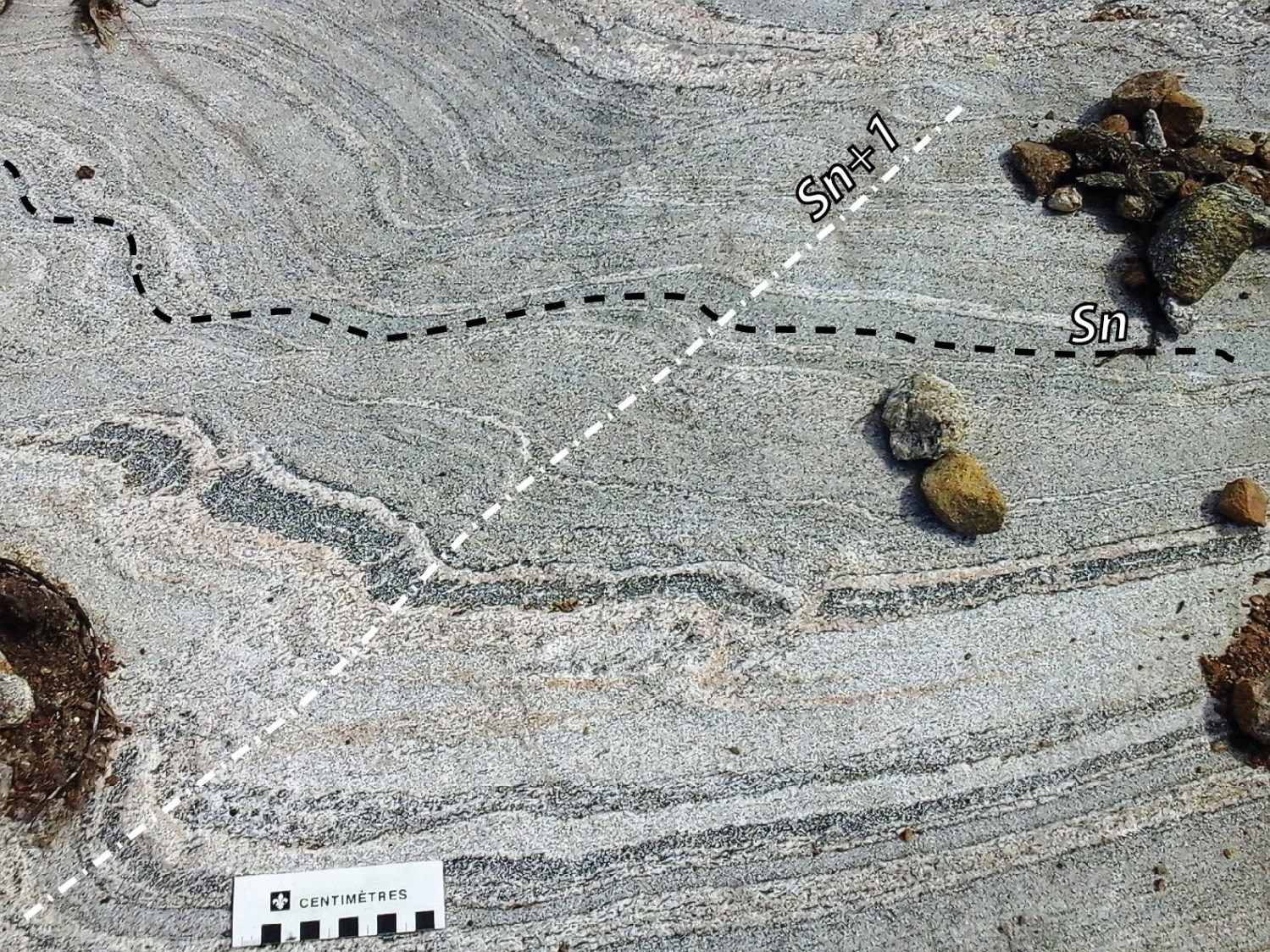 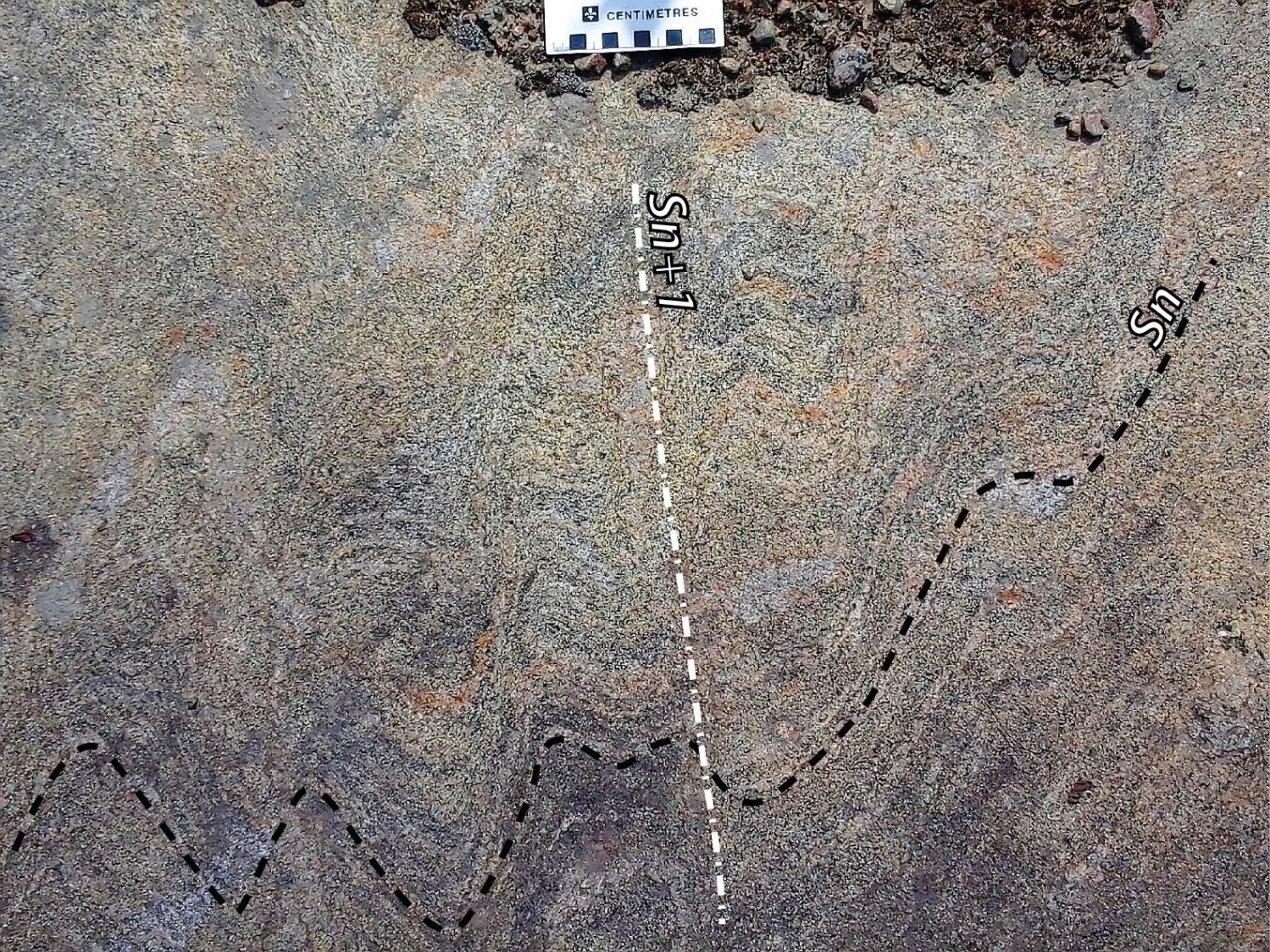 The Sn foliation is frequently cut by a variably developed tectonometamorphic foliation Sn+1. This Sn+1 foliation is generally diffuse in the rock and marked by the preferential orientation of biotite flakes, if present, and locally by the flattening of quartz grains. Although this foliation is common in the Bouchette Structural Domain, it has rarely been measured, probably because it is often confused with the main Sn fabric. This foliation is frequently observed in the hinges of regional folds Pn+1, where it appears locally as a crenulation foliation. The few measurements available seem to show that the Sn+1 foliation is submeridian and that its steep dip is rather eastward. However, the attitude of the Sn+1 foliation, which could be confused with Sn at the Bouchette Structural Domain scale, must be more variable and its trajectory probably folded. 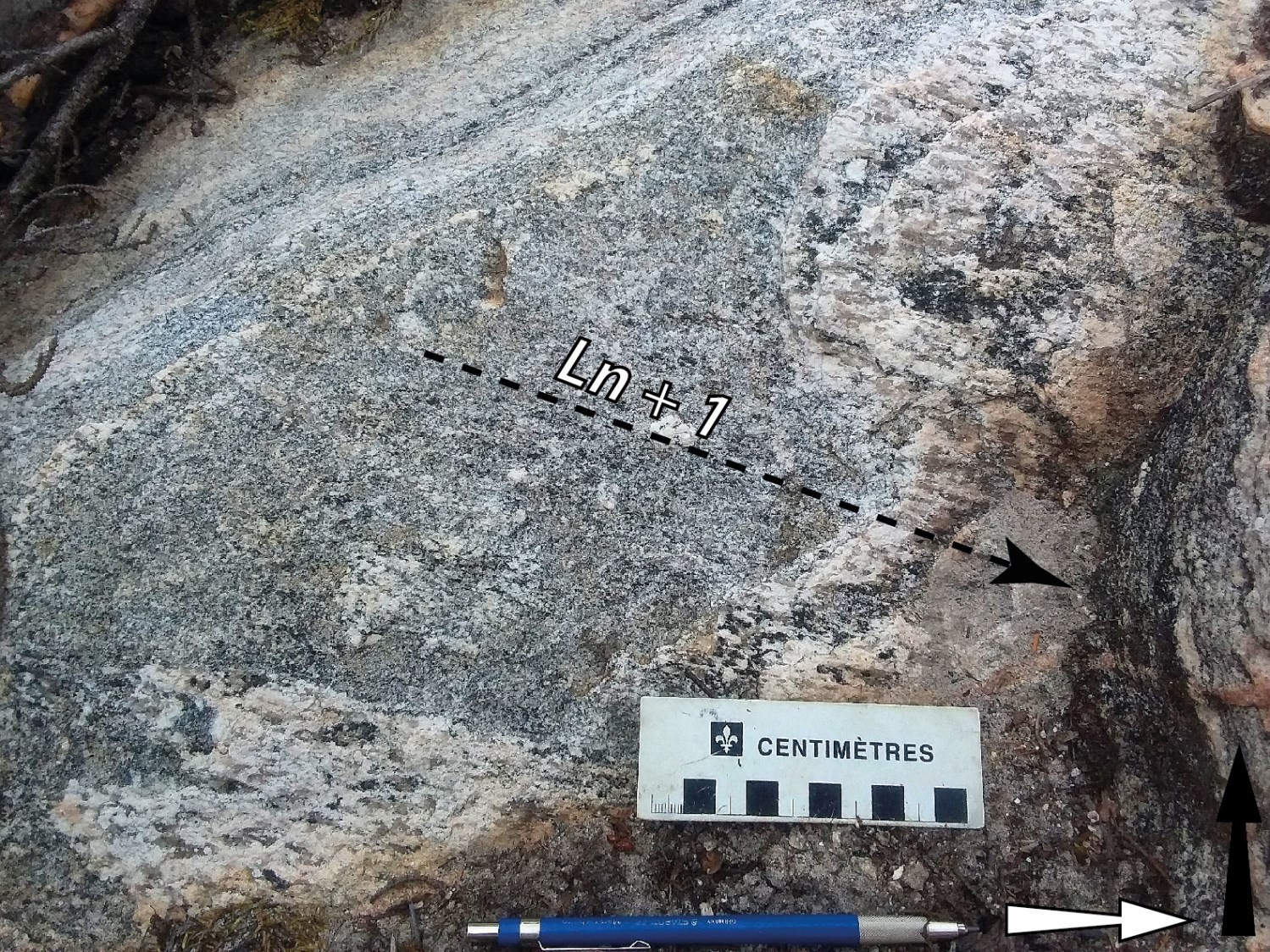 An orientation lineation, often approaching the azimuth of the plane on which it was measured (directional type), and often below 30°, was extensively measured in the Bouchette Structural Domain. Although the planes that carry it have been attributed to Sn, this lineation has very different characteristics than Ln. As such, we attribute it to the Dn+1 deformation phase. This hypothesis is all the more possible since, as mentioned earlier, Sn and Sn+1 could easily be confused at the domain scale. In outcrop, the Ln+1 lineation is often marked by stretching of rock constituents, particularly quartz grains. The stereographic projection of Ln+1 lineation measurements generally presents a distribution as a large circle bordering the canvas. This type of distribution could be explained by folding of fabrics associated with the Dn+1 phase. 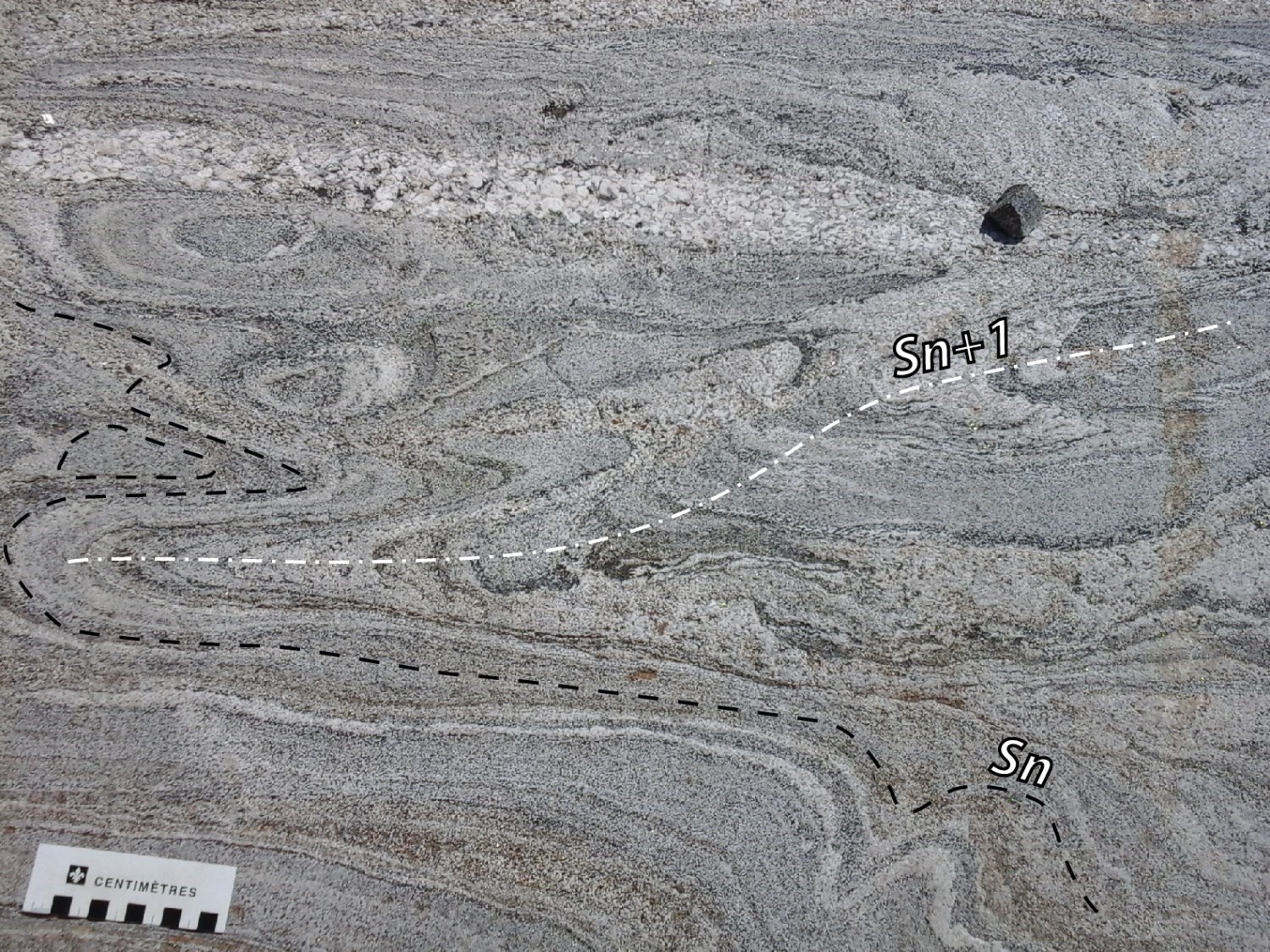 The map distribution of planar structural fabrics and the analysis of geophysical lineaments interpreted from total magnetic field maps and its derivatives (Intissar and Benahmed, 2015) show that Sn foliation trajectories are very curvilinear and appear to draw folds affecting most units of the Bouchette Structural Domain. Folds belonging to at least two folding phases are interpreted within the Bouchette Structural Domain.

The first phase of folding appears to be the origin of the general oblong domed shape of the Marianne and Rodez plutonic suites. The long axes of these domes would then represent traces of Pn+1 antiform axial planes oriented NNW-SSE. To the west of the Marianne Plutonic Suite dome, the Sn structural fabric within the Bardeau Plutonic Suite and Wabash Complex draws a Pn+1 synform fold, which appears isoclinal in map. The same type of folds can be deduced between the Marianne and Rodez plutonic suites. In fact, the internal structure of this intrusion appears to be a Pn+1 fold, probably synform, with an axial plane trace spiralling in a NW-SE direction. This fold is tight to isoclinal and has an amplitude of several tens of kilometres.

The Pn+1 fold of the Marianne Plutonic Suite is folded by Pn+2 folds with WNW-ESE oriented axial planes. These are tight folds with wavelengths and amplitudes of up to 10 km. Similar orientation folds have also been interpreted elsewhere in the Bouchette Structural Domain. Indeed, the largest intrusion in the Leda Intrusive Suite shows an ovoid bowl shape on a map, with the NE-SW-oriented long axis representing a synform fold. At the same time, NE of the domain, Sn foliation trajectories and magnetic lineaments seem to indicate the presence of an antiform fold affecting the Travers Suite and Thaddé Plutonic Suite, and whose axis is also oriented NE-SW.

Evidence of polyphase folding affecting the Bouchette Structural Domain can be observed at the outcrop scale. Indeed, geometries that can be attributed to fold interference figures have been observed locally in Wabash Complex paragneiss.

The analysis of high-resolution magnetic maps (Intissar and Benahmed, 2015), available in the Commissaires Lake area, allowed for the identification of a number of faults that cut the Bouchette Structural Domain.

The Bouchette Structural Domain shows polyphase deformation. Structural and geophysical analysis reveals at least three deformation phases, including two regional folding phases. As mentioned earlier, the Sn foliation is expressed in particular by migmatitic banding or gneissosity in the Bardeau Plutonic Suite and Wabash and Barrois complexes. It was folded for the first time during a Dn+1 deformation event, possibly associated with a shortening phase oriented approximately E-W. In addition, an Sn+1 axial-plane foliation is associated with these folds, but it is often confused with Sn. The third phase of deformation Dn+2 led to the development of ENE-WSW-oriented Pn+2 folds. This last phase of deformation would therefore be attributed instead to NW-SE shortening. However, there is currently no foliation or axial plane schistosity associated with Pn+2 folds. Polyphase folding of the Bouchette Structural Domain likely resulted in a general architecture in domes and basins.

The metamorphic characteristics of the Bouchette Structural Domain were determined by thin section observations of ~80 representative samples of all stratigraphic units. These analyses seem to indicate that all rocks in the area have been affected by temperature conditions that vary between the amphibolite and granulite facies. However, the metamorphic grade distribution does not seem random at the domain scale.

Intermediate to mafic intrusive rocks of the Marianne, Rodez and Thaddé plutonic suites contain orthopyroxene, clinopyroxene and, more locally, garnet. At the same time, deformed quartzofeldspathic facies of these units show coarse grain size and often very rounded grain edges, indicating dynamic recrystallization by migration of grain joints at high temperatures (Gower and Simpson, 1992). Quartz grains also commonly have a chessboard texture, which is a characteristic of combined intracrystalline slippage along crystallographic directions a and c during a deformation process at a temperature of approximately 600°C or higher (Blumenfeld et al., 1986; Gapais and Barbarin, 1986). All of these mineral and textural characteristics therefore suggest that rocks of the Marianne, Rodez and Thaddé plutonic suites have been emplaced or deformed under granulite facies metamorphic conditions associated. Nevertheless, pyroxenes are frequently transformed into hornblende, which could indicate retrogressive metamorphic conditions at the amphibolite facies.

Apart from the Marianne, Rodez and Thaddé plutonic suites, the Bardeau Plutonic Suite and Barrois and Wabash complexes seem to show metamorphic assemblages typical of the upper amphibolite facies. Metasedimentary rocks studied have biotite-garnet-sillimanite assemblages. Orthopyroxene is sparsely observed in intermediate to mafic intrusive rocks, which have of hornblende-biotite ± clinopyroxene mineralogical assemblages.

The high-resolution total magnetic field map (Intissar and Benahmed, 2015) in the Commissaires Lake area shows that magnetism of the Bouchette Structural Domain is very heterogeneous. The domain’s magnetic pattern is generally characterized by the presence of annular or elliptical objects with low to moderate susceptibility in the central parts, but with a slight shagreen appearance. These objects overlap and coincide with the Marianne, Rodez and Thaddé plutonic suites. In contrast, the largest intrusions of the Leda Intrusive Suite and the NW portion of the Marianne Plutonic Suite, respectively to the south and west of the domain, are characterized by rounded magnetic shapes with very intense and relatively homogeneous susceptibility. Apart from plutonic and intrusive suites, more specifically in areas overlapping with the Bardeau Plutonic Suite and Wabash and Barrois complexes, the magnetic pattern is banded. Indeed, the high-resolution vertical gradient map shows a sequence of curvilinear bands more or less continuous over several tens of kilometres. The contrast of magnetic susceptibility between these bands is usually very intense.

In the Wemotaci area, graphitic paragneiss of the Wabash Complex provided a maximum deposition age of 1204 ±2 Ma (Moukhsil et al., 2015), implying that Sn migmatisation and deformation of these rocks are later than ~1.2 Ga.