The Ministic Structural Domain was defined following geological mapping surveys conducted by Moukhsil and Daoudene (2019) in the Commissaires Lake area (NTS sheets 32A01, 32A02, 32A07 and 32A08), southwest of Lake Saint-Jean.

The morphology and extent of the Ministic Structural Domain are still undetermined. Indeed, the entire dataset presented in this record originated from the domain portion covered by sheets 32A02 and 32A07. However, this area appears to be only a small part of the domain. High-definition magnetic imaging available in the area (Intissar and Benahmed, 2015) suggests that the Ministic Structural Domain extends further south, west and north in sheets 31P14, 31P15, 32A03, 32A06, 32A10 and 32A11. In the Commissaires Lake area, the Ministic Structural Domain forms a strip no more than 15 km wide, N-S oriented and spread over the entire width of sheets 32A02 and 32A07, along their western border. In these sheets, it is delineated to the east by the Sainte-Hedwidge, Bouchette and Commissaires structural domains.

The stratigraphic units present in the Ministic Structural Domain are:

In sheets 32A02 and 32A07, most outcrops of the Ministic Structural Domain show only one type of planar structural fabric expressed by gneissosity and migmatitic banding, particularly in the Pope and Bardeau plutonic suites, as well as in the Barrois and Wabash complexes. Since the measurement trajectory of these fabrics appears to be continuous from one outcrop to another, almost all measurements in the domain are attributed to Sn. The age of the associated Dn deformation phase is 1.2 Ga (see section “Chronological markers”). In the event that structural fabrics associated with at least one earlier deformation phase (i.e. Dn-1) could later be identified in the Ministic Structural Domain, it was agreed to match the Sn foliation to S2 of “geofiches”. 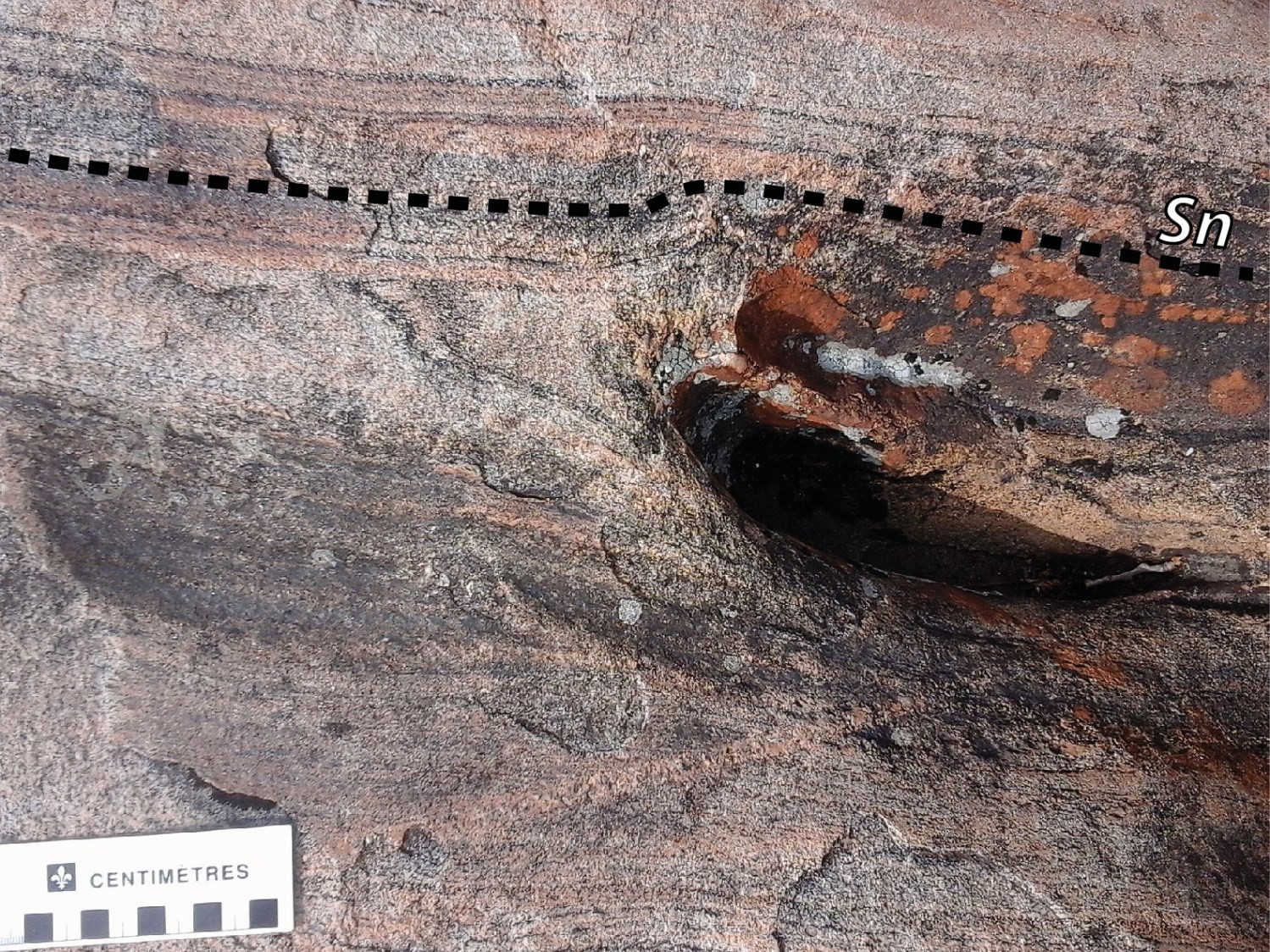 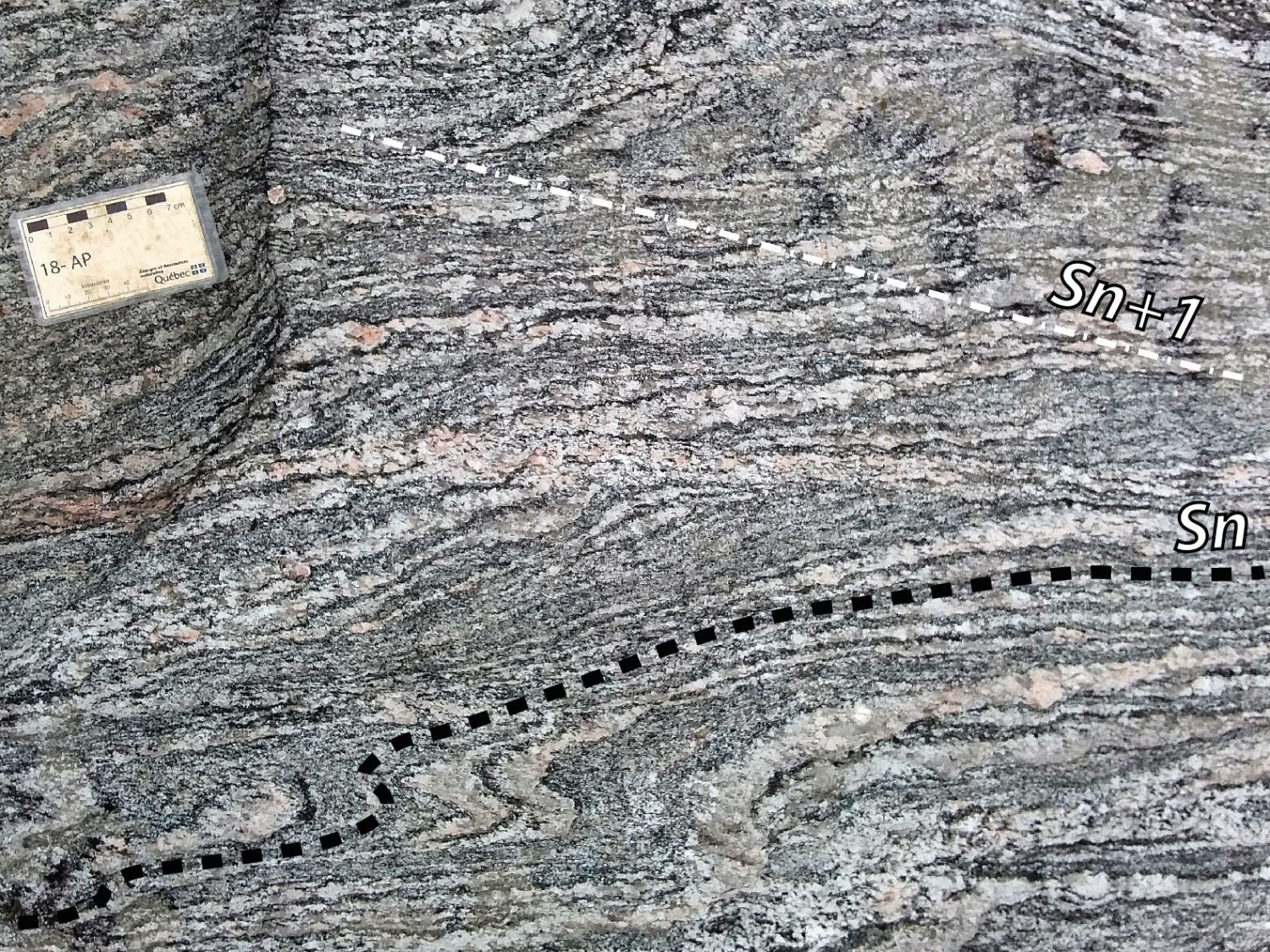 The Sn planar fabric dominates the Ministic Structural Domain architecture in sheets 32A02 and 32A07. This fabric is expressed in different ways, but it is generally well developed in the Pope and Bardeau plutonic suites, as well as in the Barrois and Wabash complexes. In most of intrusive rocks of the Pope and Bardeau plutonic suites, gneissosity is visible by alternating pinkish and pink-grey centimetric bands, respectively poor and rich in ferromagnesian minerals. In the Barrois and Wabash complexes, the Sn foliation is underlined by ubiquitous migmatitic banding in paragneiss. This banding consists of alternating whitish or slightly pink mobilisate bands and greyish ones usually composed of mesosome. Mobilisate bands commonly have thin fringes almost exclusively composed of biotite along their edges, one of the characteristics that could be interpreted as evidence of in situ partial melting of the rock.

The foliation’s attitude within the Léo and Bonhomme plutonic suites follows the edges of mangeritic intrusions. In other words, the foliation trajectory in these intrusions is concentric. Regionally, this foliation also appears to be concordant to the Sn foliation of the Bardeau Plutonic Suite (host rock). This implies that measurements from the Léo and Bonhomme plutonic suites are associated with the Dn deformation phase. Nevertheless, nothing excludes that this concentric foliation developed when intrusions were emplaced, which, moreover, could be contemporaneous with the Dn deformation. In any case, the foliation in the Léo and Bonhomme plutonic suites is variably developed. In fact, some outcrops show penetrative and continuous foliation marked by the orientation of ferromagnesian mineral clusters in a preferential plane, while other outcrops show very well-developed gneissosity.

In sheets 32A02 and 32A07, Sn foliation measurements allow for the calculation of an average plane with an azimuth of 36° and a 31° SE dip. Nevertheless, although the stereographic projection of Sn poles highlights a dominant group distributed in the WNW area of the canvas, the variability is significant in both orientation and dip. This can be explained by folding of the Sn foliation at the regional scale, which could be the result of at least two deformation phases. This is supported by the attitude of the Sn foliation map trajectory.

The Sn foliation carries an Ln lineation whose attitude is highly variable and difficult to interpret. In fact, this variability would be the result of folding of the Sn foliation. 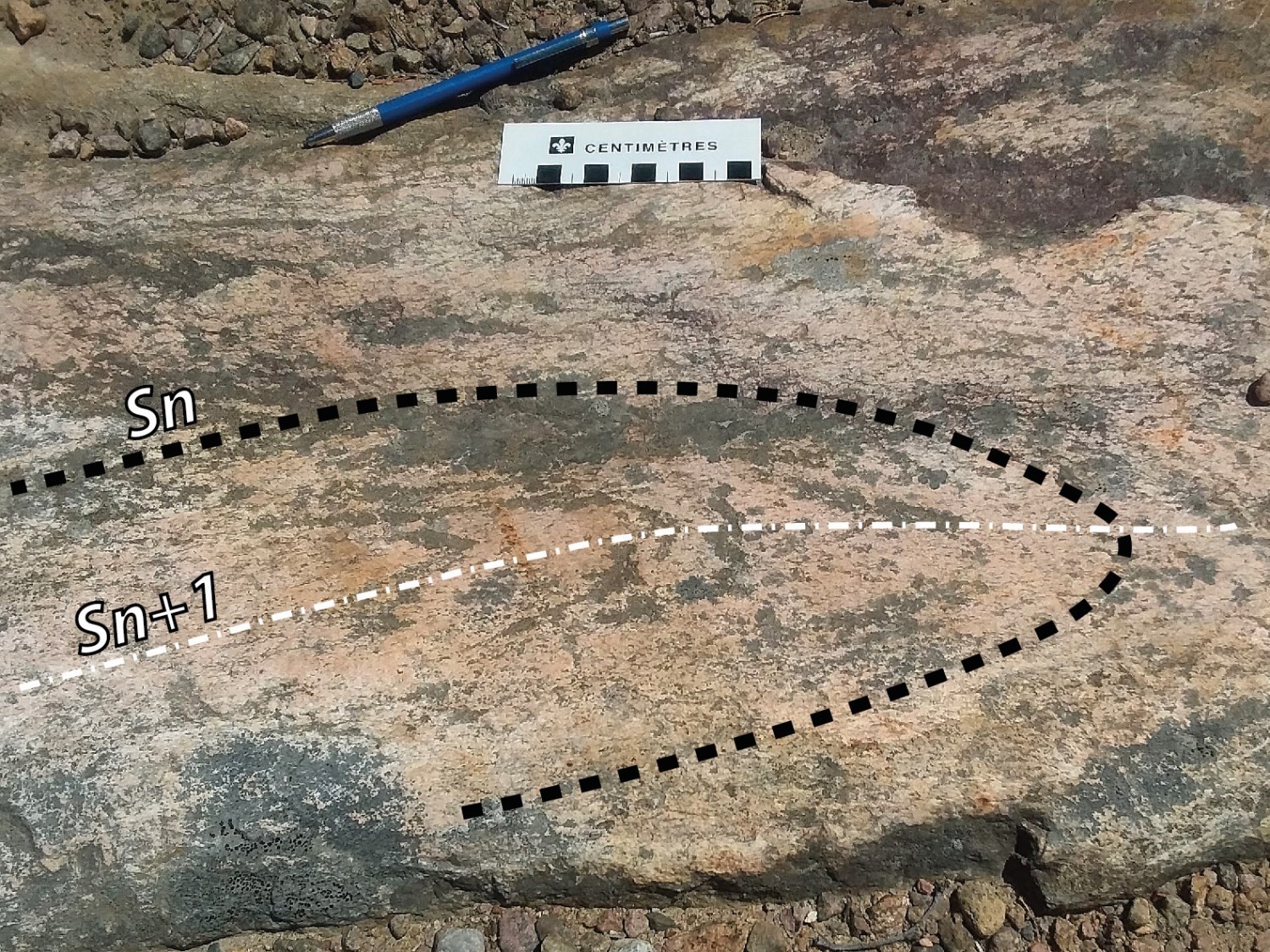 Gneissosity and migmatitic banding are commonly folded and cut by a Sn+1 foliation that appears to be roughly parallel to the Pn+1 antiform axial plane trace (see below). This foliation is relatively discreet and usually confused with Sn when N-S oriented. Nevertheless, in Pn+1 hinges, both fabrics are oblique and therefore clearly identifiable. The Sn+1 foliation is emphasized by directional flattening and elongation of quartz grains and ferromagnesian mineral clusters (biotite and amphibole). A limited number of Sn+1 measurements have been collected, but their stereographic projection shows that the Sn+1 foliation is generally oriented NNE-SSW and its dip is typically >70°.

The Sn foliation trajectory inferred from field data and interpretation of geophysical lineaments derived from the analysis of total magnetic field maps and their derivatives (Intissar and Benahmed, 2015) seems to show that the Ministic Structural Domain is affected by at least two folding phases.

In the SW corner of sheet 32A02, the Pn+1 antiform trace is folded by tight Pn+2 folds, of kilometric wavelength and amplitude. These folds are oriented NE-SW and the attitude of Sn foliation measurements, located on either side of axial plane traces, suggests that they are generally overturned westward. The Rhéaume Intrusive Suite occupies the axial part of a Pn+2 antiform. Folds having similar attitude (shape, wavelength and amplitude), interpreted as Pn+2, are also present east of the Bonhomme Plutonic Suite. However, they have an ENE-WSW orientation, slightly oblique to those of the Pope Plutonic Suite, but also seem to be overturned towards the NW.

In sheets 32A02 and 32A07, the Ministic Structural Domain is cut by a number of faults inferred from high-definition magnetic field maps (Intissar and Benahmed, 2015), which appear to have been divided into two families. One is oriented NE-SW and involves dextral strike-slip faults, interpreted in the NW corner of sheet 32A07; the other is oriented NW-SE and consists of sinistral strike-slip faults, interpreted south of sheet 32A02. This family of faults also cuts the Commissaires Structural Domain.

The Ministic Structural Domain shows polyphase deformation and at least two regional folding phases. The Sn foliation, which is expressed by gneissosity in the Pope and Bardeau plutonic suites and migmatitic banding in paragneiss of the Barrois and Wabash complexes, was folded for the first time during a Dn+1 deformation event. This appears to be associated with an E-W shortening phase. Subsequently, the Pn+1 antiform is locally overprinted by kilometric open Pn+2 folds. The overall NE-SW orientation of these Pn+2 folds then appears to indicate a NW-SE shortening phase.

Approximately 40 representative rock samples were studied as thin sections to establish the metamorphic characteristics of the Ministic Structural Domain. Mineralogical and structural observations indicate that metamorphic conditions within the domain are distributed between the amphibolite and granulite facies.

Felsic to intermediate intrusive rocks of the Bonhomme and Léo plutonic suites commonly show quartz-plagioclase-K-feldspar-orthopyroxene-hornblende-biotite assemblages. Locally, the presence of garnet may be observed. These rocks, whose diffuse foliation is often weakly expressed and marked by the preferential orientation of ferromagnesian minerals, are characterized by coarse grain size and an interlobed heterogranular texture. Indeed, the border between quartz and feldspar grains is often clearly rounded, suggesting a process of dynamic recrystallization at high temperature (Gower and Simpson, 1992). The frequent presence of K-feldspar porphyroclasts developed near the edges of myrmekite grains, the abundance of flame-like perthite in these clasts, and the chessboard texture of quartz grains indicate temperature conditions of at least 600°C during deformation (Blumenfeld et al., 1986; Gapais and Barbarin, 1986; Simpson and Wintsch, 1989; Pryer, 1993).

Around the Bohomme and Léo plutonic suites, rocks of the Bardeau Plutonic Suite and Barrois and Wabash complexes instead show mineralogical assemblages typical of amphibolite facies metamorphic conditions. In fact, aluminous metasedimentary rocks petrographically studied have biotite-garnet-sillimanite-muscovite assemblages, whereas observed intermediate intrusive rocks show an assemblage of biotite-hornblende ferromagnesian minerals, and the absence of pyroxene.

In sheets 32A02 and 32A07, the high-resolution total magnetic field map (Intissar and Benahmed, 2015) shows an overall pattern dominated by curvilinear magnetic lineaments and generally strong and low susceptibility. In some areas, particularly those where the Pope, Bonhomme and Léo plutonic suites overlap, show lobed or elliptical patterns with overall moderate to intense magnetic susceptibility. Elsewhere, the magnetic pattern is more banded, but lineaments are curvilinear. These areas approximate overlapping zones of the Bardeau Plutonic Suite and Barrois and Wabash complexes.

In the Wemotaci area, graphite paragneiss of the Wabash Complex provided a maximum depositional age of 1204 ±2 Ma (Moukhsil et al., 2015), implying that the Sn migmatisation and deformation of these rocks are younger than ~1.2 Ga. In addition, a syenite of the Rhéaume Intrusive Suite was dated by U-Pb zircon method at 985.3 ±9.3 Ma (Côté et al., 2018). This intrusive sequence forms an ellipse with a long axis overlapping with a Pn+2 axial plane trace. This suggests that the Dn+2 deformation is either younger or contemporaneous to the Rhéaume Intrusive Suite emplacement.