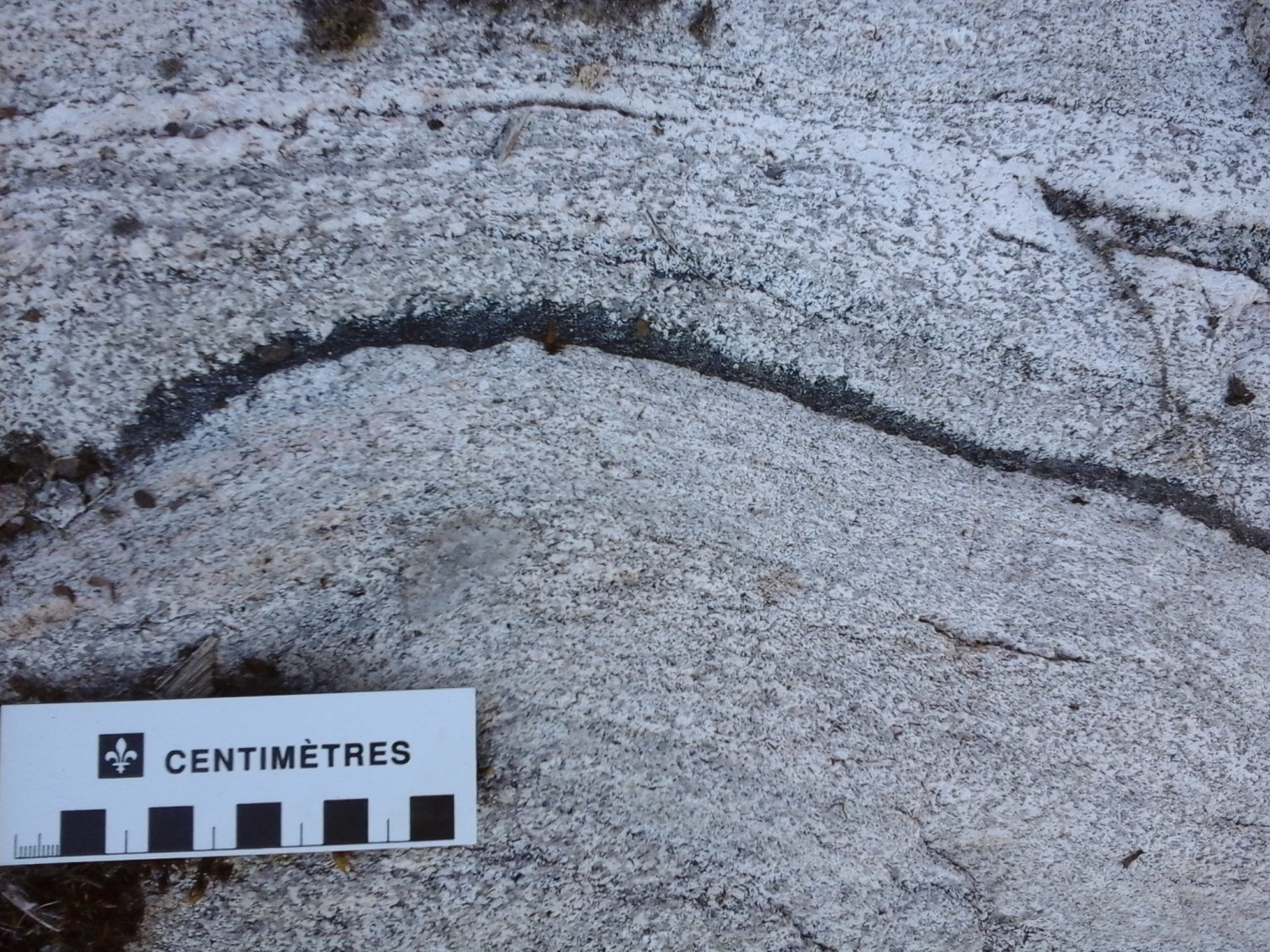 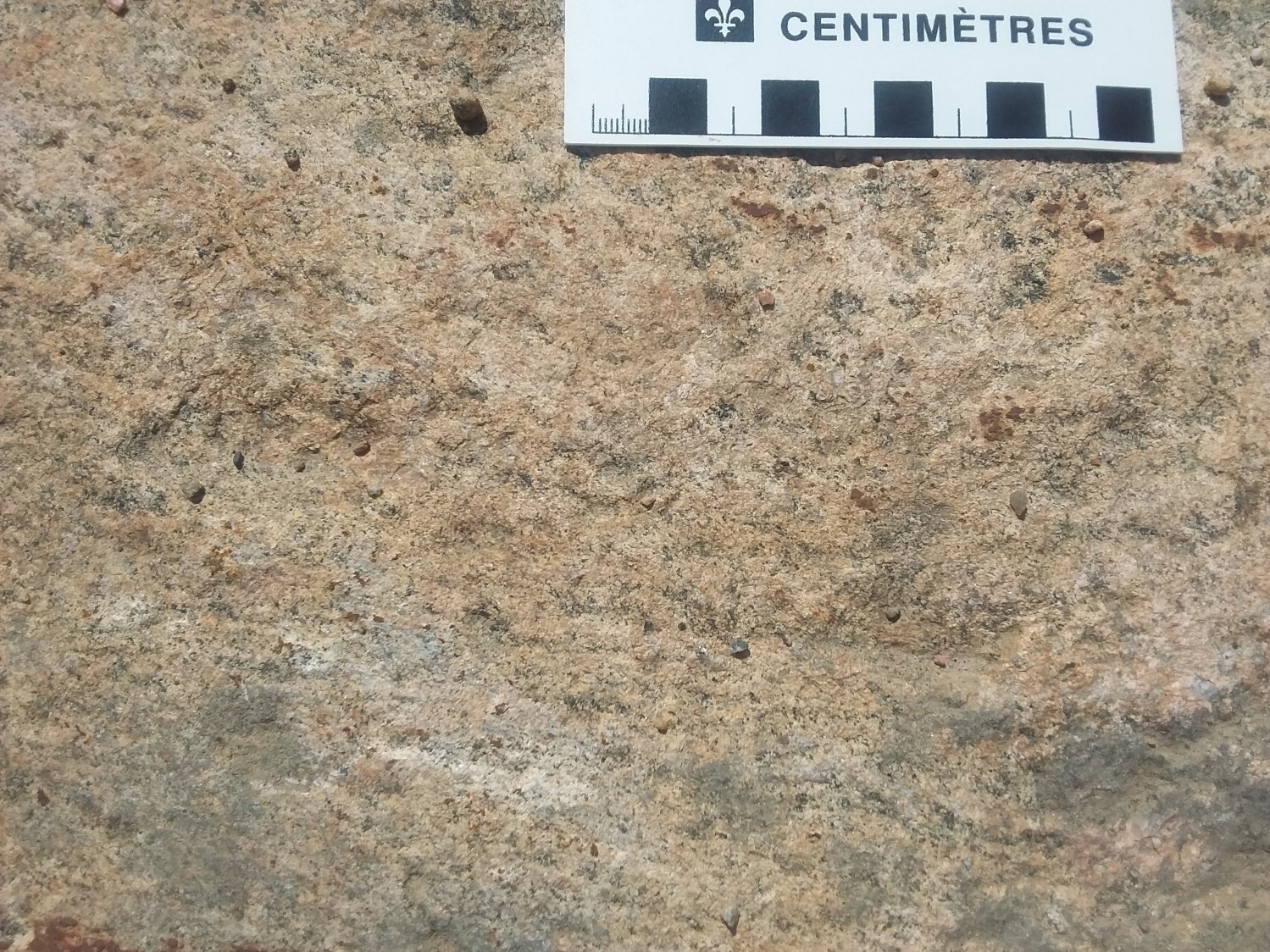 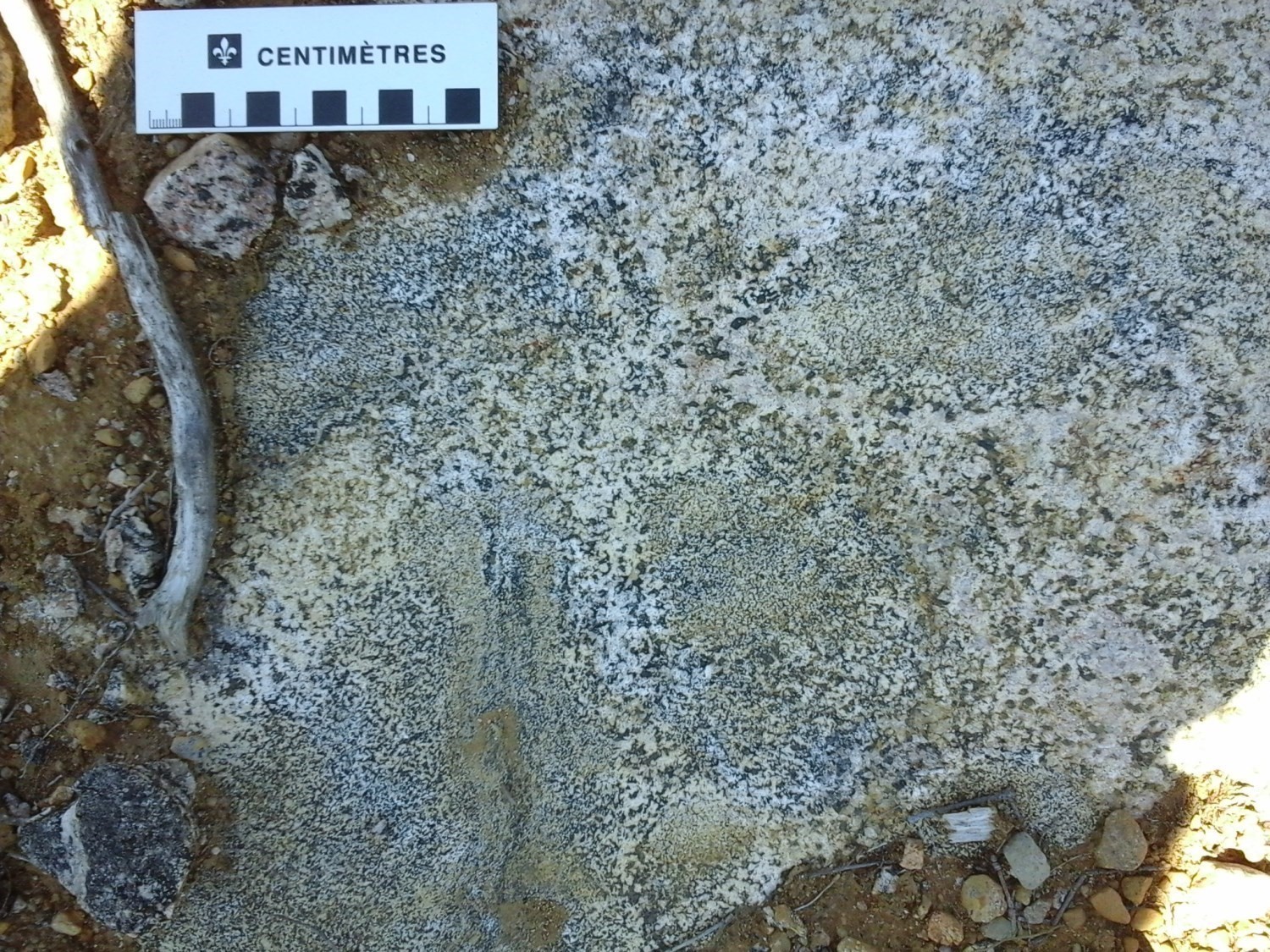 Unit mPboi1 consists mainly of orthogneiss. These are very heterogeneous and closely related to paragneiss layers (mPboi4). Generally, these orthogneiss are whitish grey, fine to medium grained and more or less banded. Their composition is highly variable, but it is usually granodioritic to tonalitic and, more locally, monzogranitic. Ferromagnesian minerals (biotite, brown hornblende) can make up 15 to 25% of the rock.

Gneiss is greyish to pinkish and medium grained. It is granitic in composition with K-feldspar, plagioclase, amphibole and biotite. Orthopyroxene is generally replaced by amphibole or biotite along grain edges, giving the rock a coronitic texture. Gneissosity is mainly marked by the elongation of discontinuous clusters of ferromagnesian minerals that delineate quartzofeldspathic bands whose grains themselves show a slight preferential flattening perpendicular to foliation.

Unit mPboi2 was only observed in sheet 32A10, mainly in its western portion (Morfin et al., 2015). It consists of orthopyroxene gneissic rocks (charnockite, enderbite), medium-grained and granoblastic. Orthopyroxene is observed in the field and in thin section. It is millimetric and contained in a fine-grained foliated quartzo-feldspathic matrix. 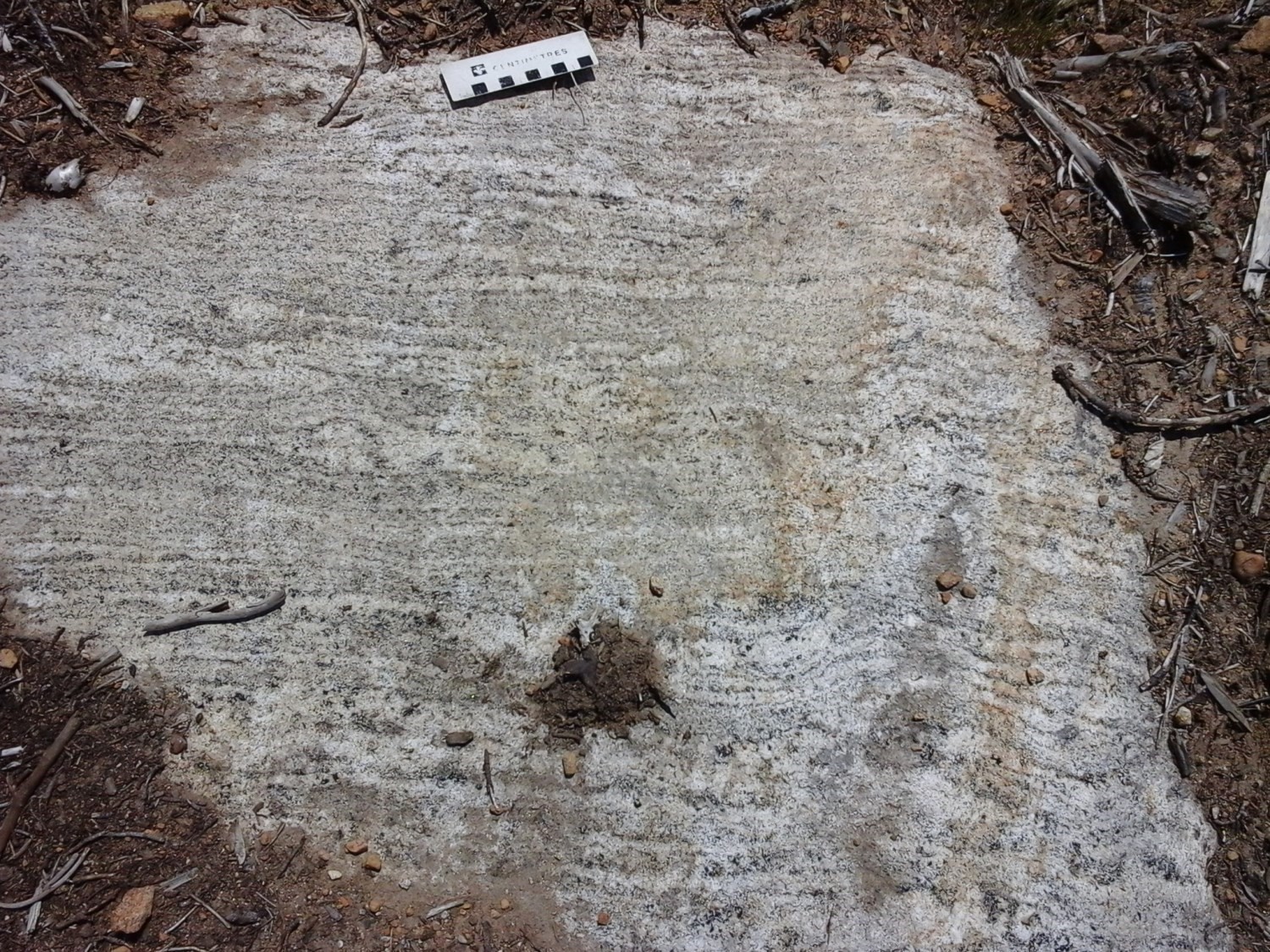 Unit mPboi4 consists of paragneiss within orthogneiss of the complex’s other units (mPboi1 to mPboi3). Paragneiss is banded and is generally differentiated from orthogneiss by a greater proportion of biotite, making it more mesocratic. Garnet and sillimanite are locally present. Garnet occurs as lilac-pink porphyroblasts that can grow to centimetric size. Sillimanite is fibrous and can represent up to 10% of the rock. It is locally associated with graphite (1-2%). Paragneiss is migmatitic, and the whitish to pinkish mobilisate is granitic. Contact between paragneiss and orthogneiss is not observed.

This paragneiss is rusty in altered patina and contains up to 2% sillimanite, 5% pyrite and 2-3% graphite flakes a few millimetres thick. The rock is migmatitic and bedded (alternating dark and light beds) because of partial melting it has undergone. Dark beds (restite, melanosome or both) are millimetre thick and rich in biotite, locally in garnet and sillimanite. Light beds (mobilisate, leucosome or both) are centimetre to metre thick and rich in quartz and K-feldspar, and contain minor amounts of biotite and orthopyroxene. Where partial melting is more significant, the rock is more likely to be a whitish migmatite containing biotite paragneiss boudins and rafts. In the Normandin area, paragneiss layers are difficult to recognize at the edge of this subunit. These are cut by coarse-grained to pegmatitic pinkish granite dykes and veins, giving the rock an appearance of granitic gneiss. 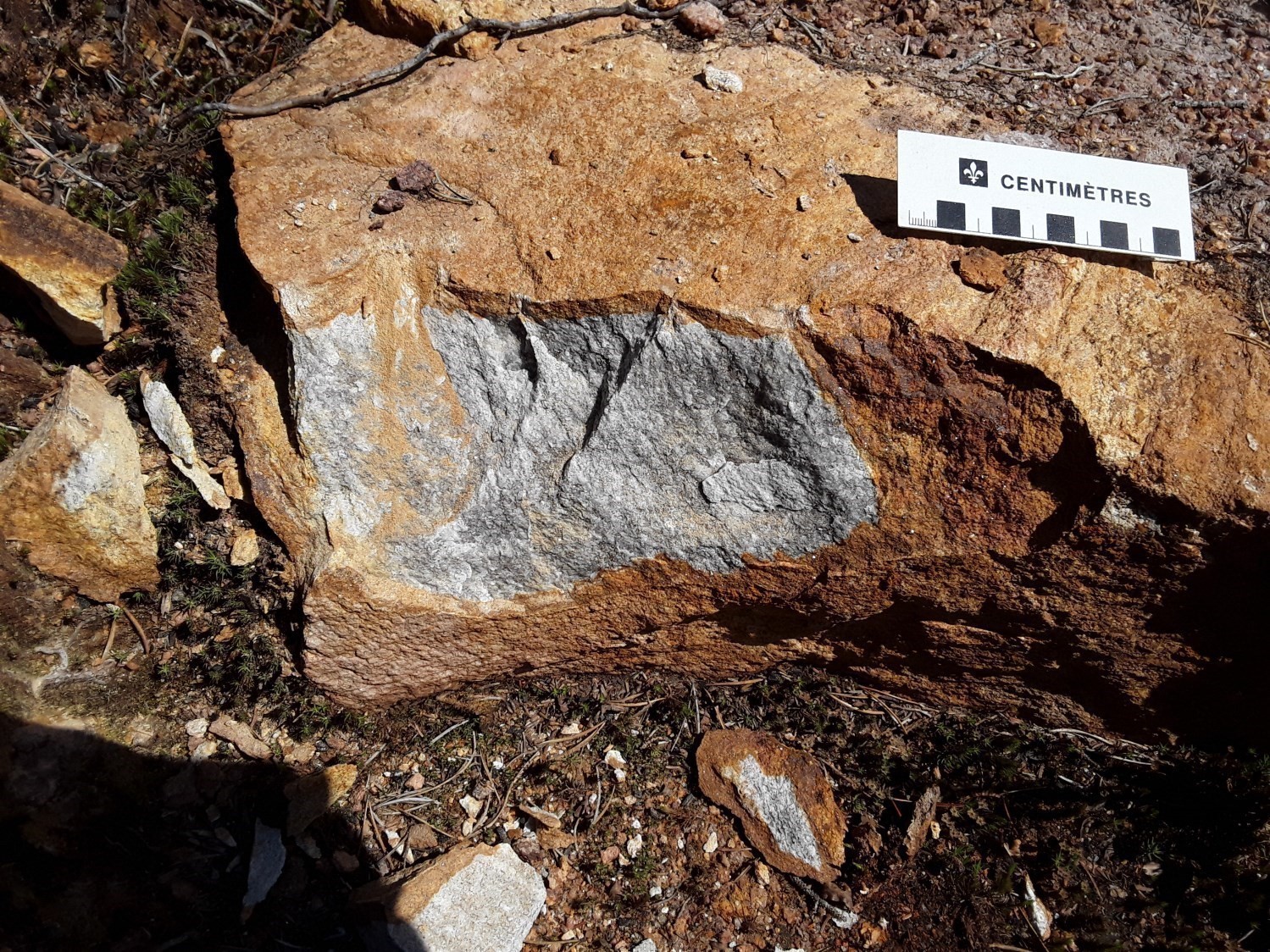 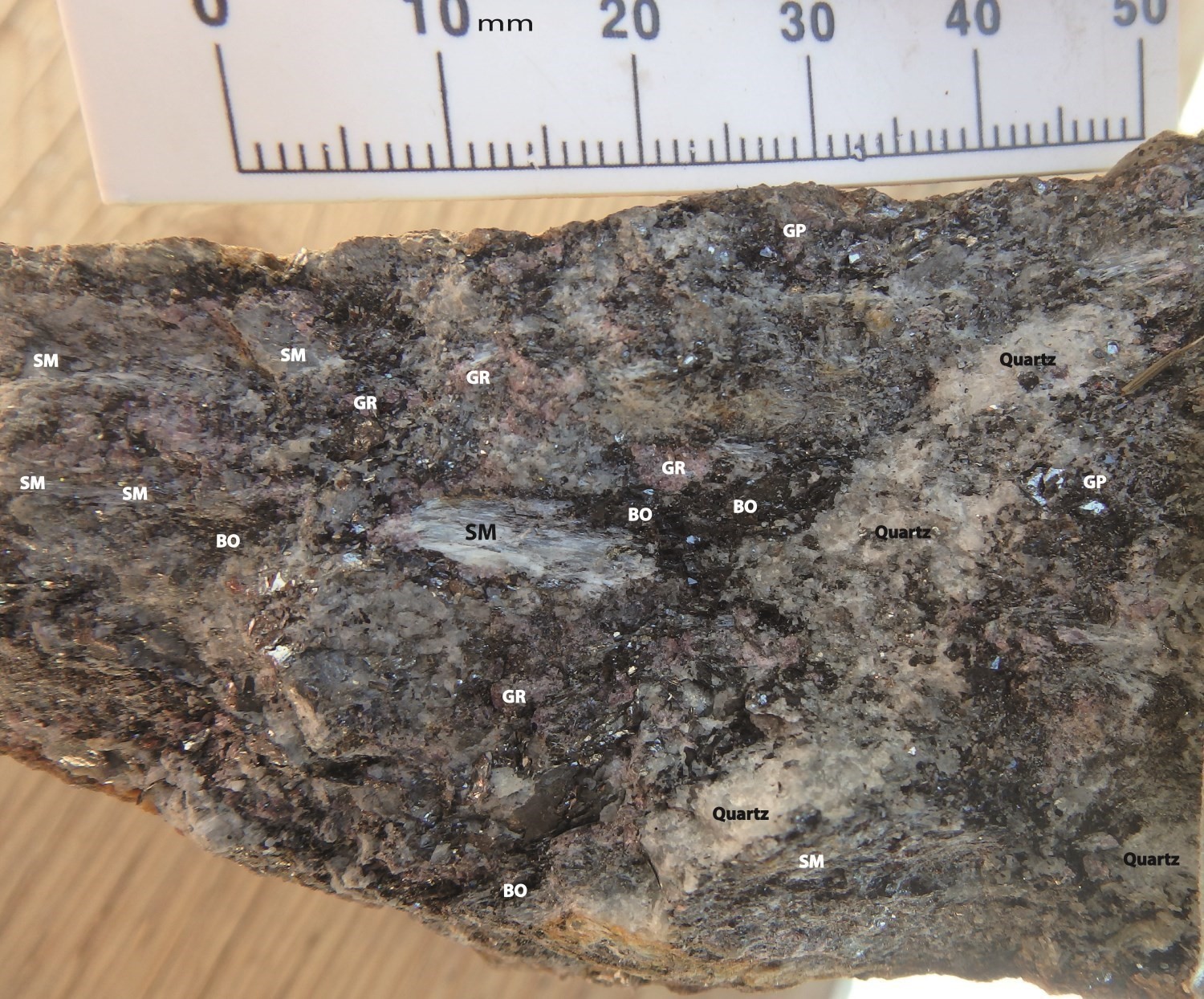 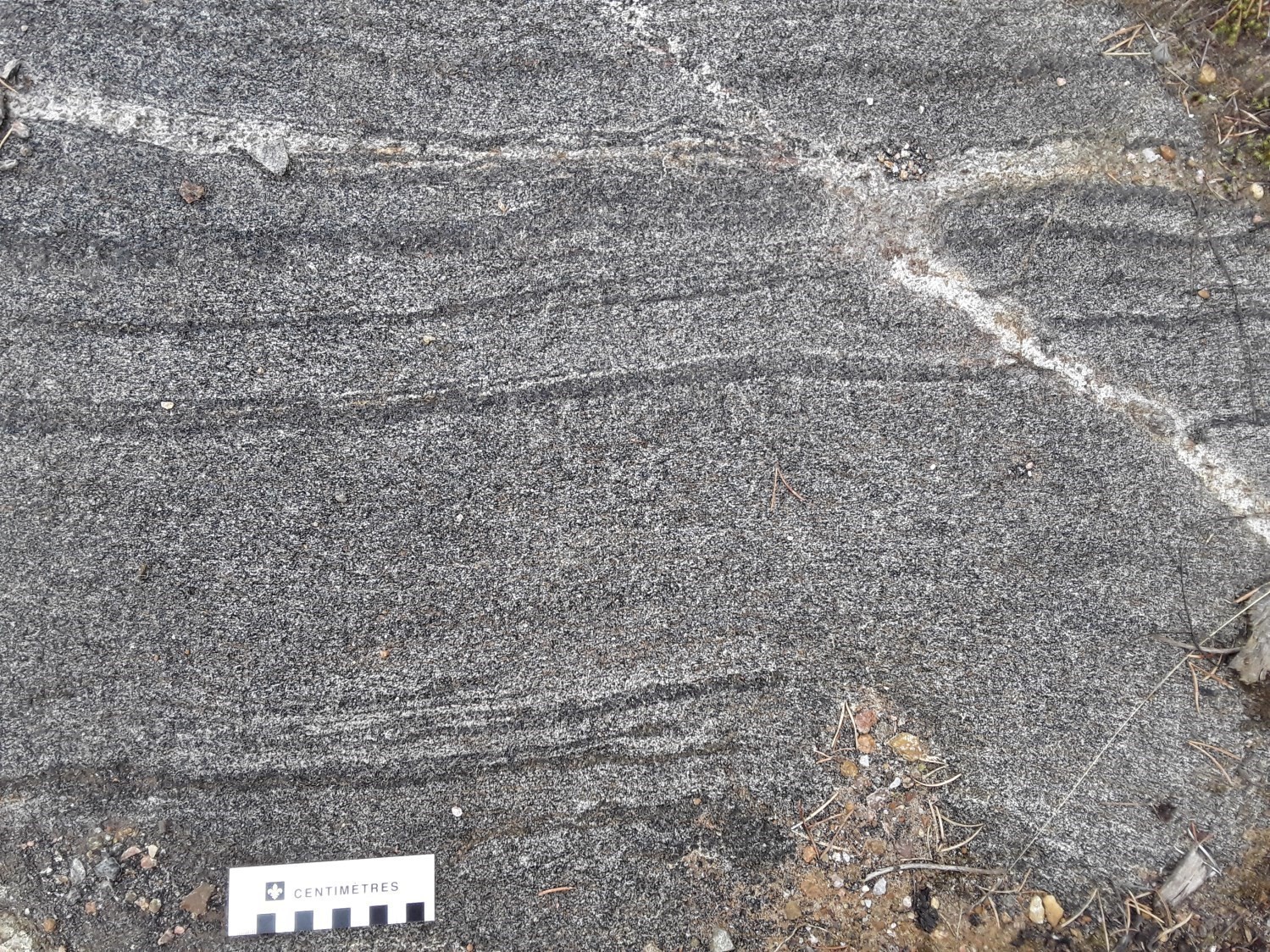 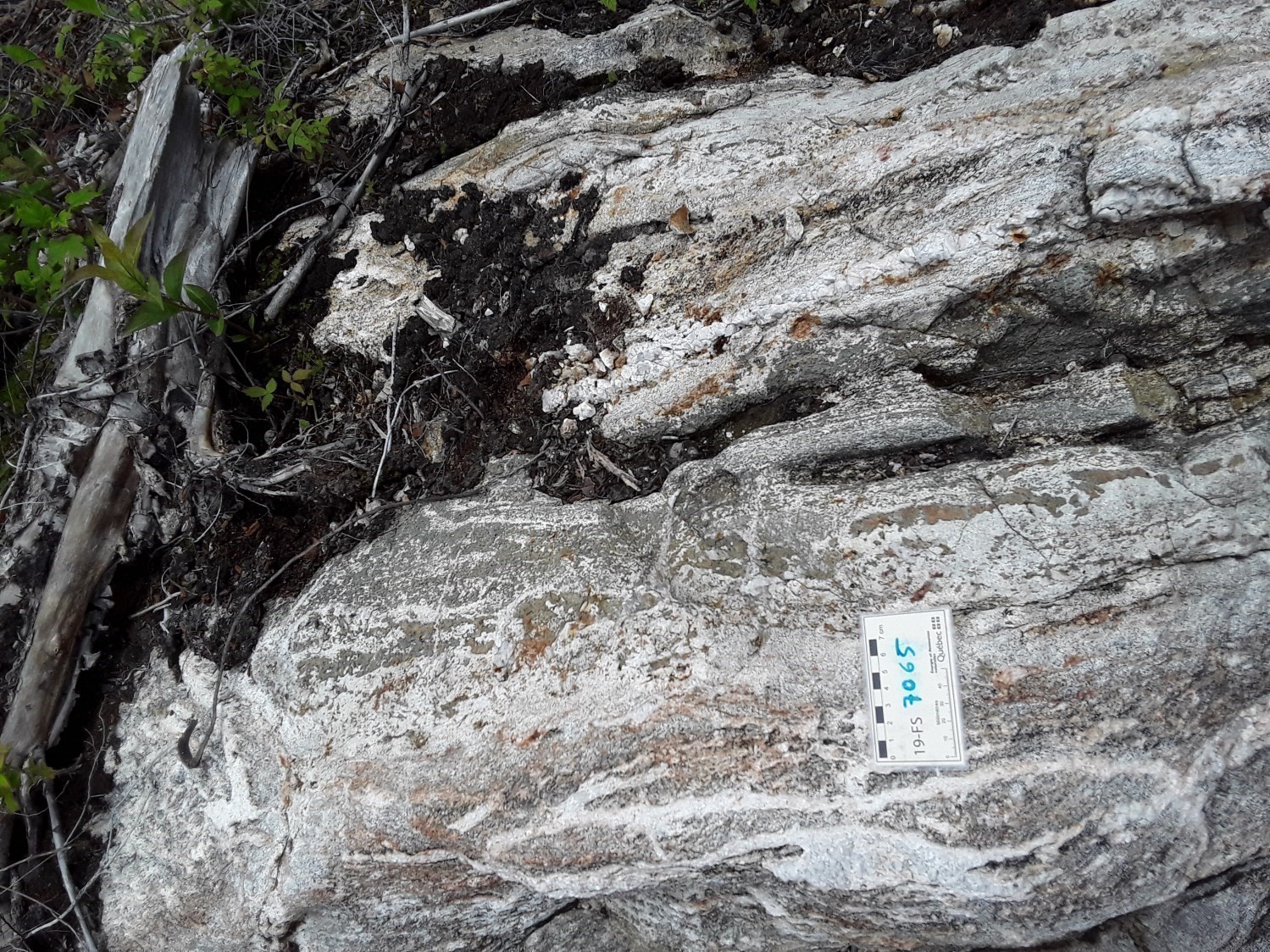 Fine-grained mafic rocks associated with biotite paragneiss and quartzite layers were interpreted as amphibolitized volcanics. These rocks are commonly heterogeneous and contain hornblende, garnet porphyroblasts (up to 2 cm in diameter), clinopyroxene, orthopyroxene and biotite. These mafic lithologies are also distinguished by their very faint magnetic signatures compared to other gabbro or gabbronorite units present in the area.

Marble occurs as layers in biotite paragneiss. The rock is calcitic to dolomitic, medium to coarse grained and whitish to greyish in fresh exposure. The mineralogical composition is: calcite (60-80%), dolomite (<10%), diopside (<2%), biotite (<1%), quartz with undulatory extinction (3-4%), scapolite (<1%), graphite (<1%) and trace minerals such as apatite, actinolite and pyrite. Minor amounts of rusty graphite-garnet paragneiss, boudinaged calcosilicate rocks, and centimetric to metric layers of impure quartzite are associated with this marble. 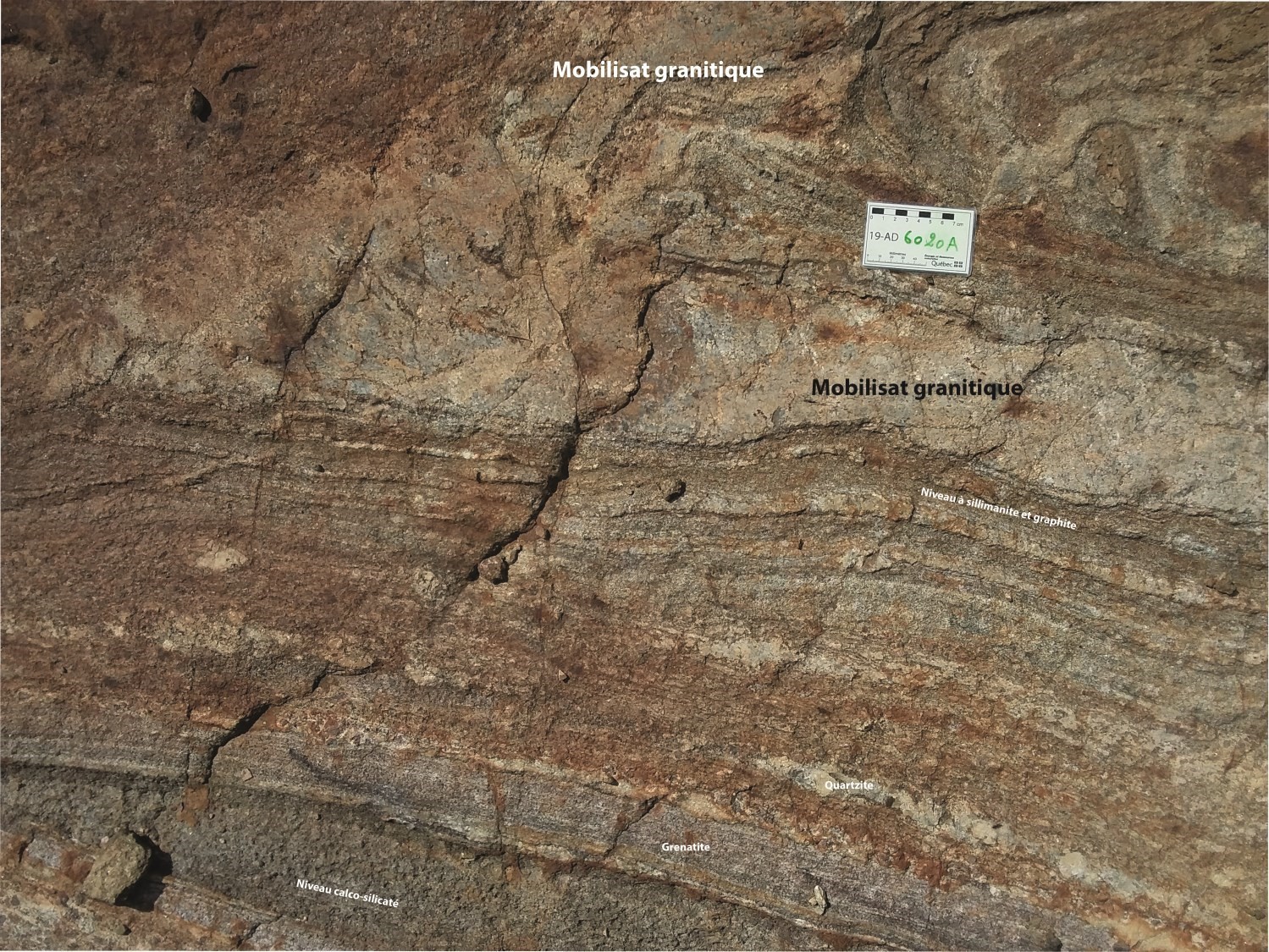 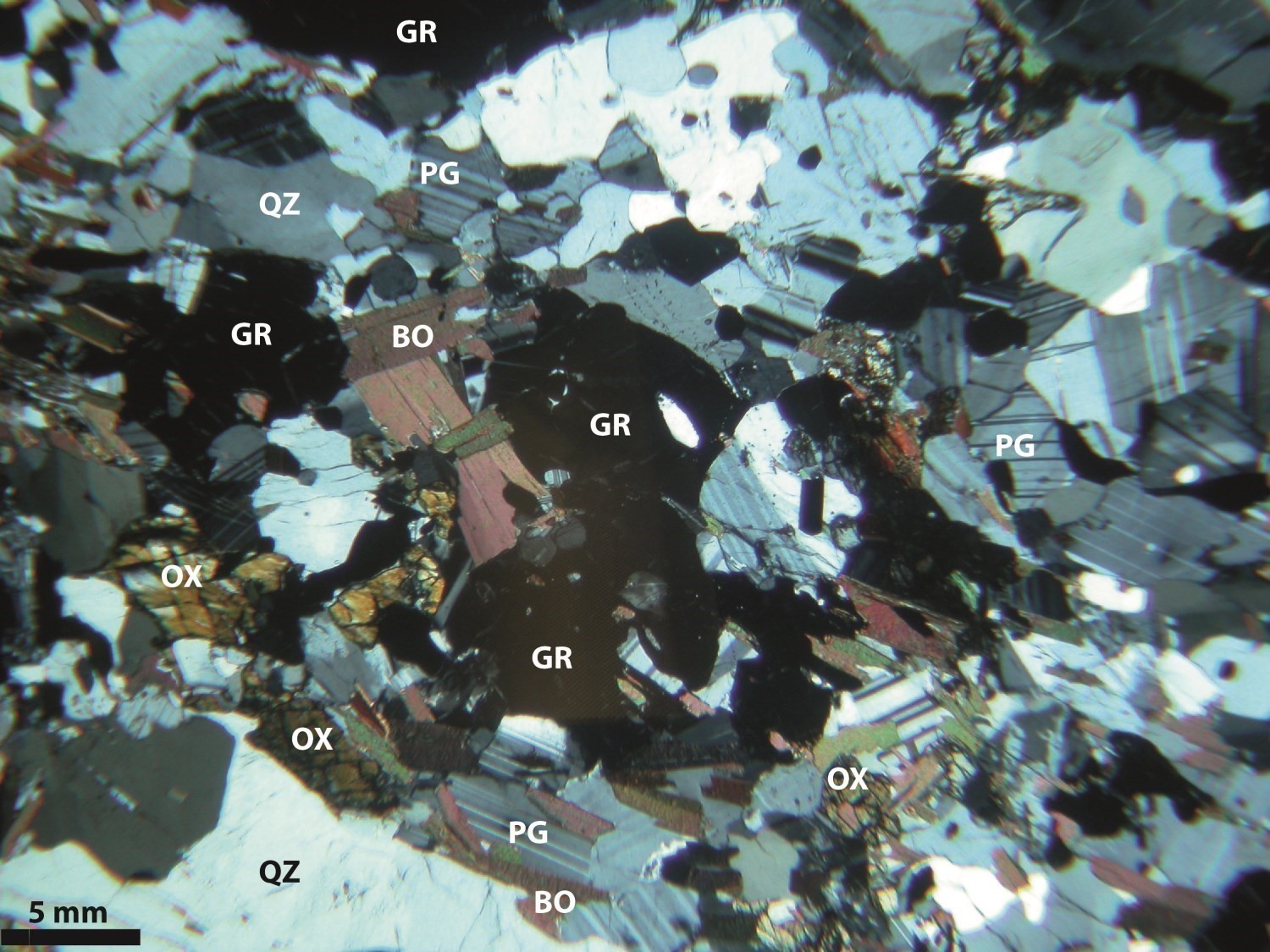 The Barrois Complex outcrops mostly in sheet 32A10 where it occupies more than 50% of the area (Morfin et al., 2015). It also occupies ~20% of sheet 32A07 area, where it forms a large strip oriented NNW-SSE over a distance of several kilometres (Moukhsil and Daoudene, 2019). Moukhsil and El Bourki (2020) also mapped a large volume of this complex in the NW portion of sheet 32A15.