The Sainte-Hedwidge Structural Domain was defined following a geological mapping survey conducted by Moukhsil and Daoudene (2019) in the Commissaires Lake area (NTS sheets 32A01, 32A02, 32A07 and 32A08), southwest of Lake Saint-Jean.

The stratigraphic units present in the Bouchette Structural Domain are:

In sheets 32A07 and 32A08, almost all outcrops of the Sainte-Hedwidge Structural Domain appear to show a single well-developed tectonometamorphic foliation. This foliation is mainly expressed by migmatitic banding or gneissosity of metasedimentary and intrusive rocks, or simply by diffuse mineral foliation. At the same time, the map trajectory of this foliation appears to be continuous from one outcrop to the other domain wide. This makes it possible to attribute the majority of foliation measurements to Sn. Assuming that fabrics associated with at least one earlier deformation phase (Dn-1) could be identified in the future in the Sainte-Hedwidge Structural Domain, the Sn foliation should be seen as representing all foliations that refer to the chronological phase 2 in “geofiches” of the domain. A few outcrops point to the presence of a second foliation, younger than the first, and denoted here Sn+1. 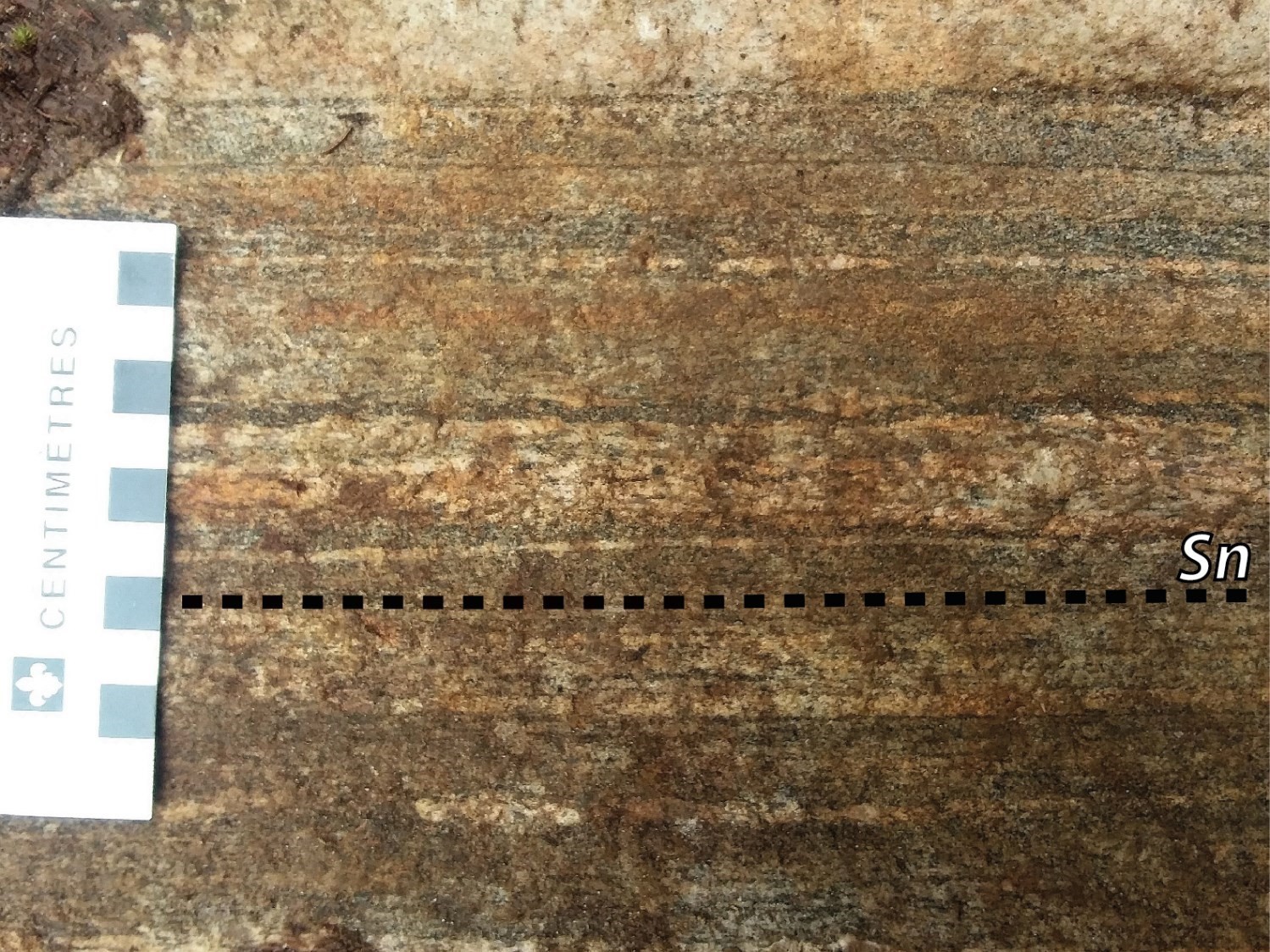 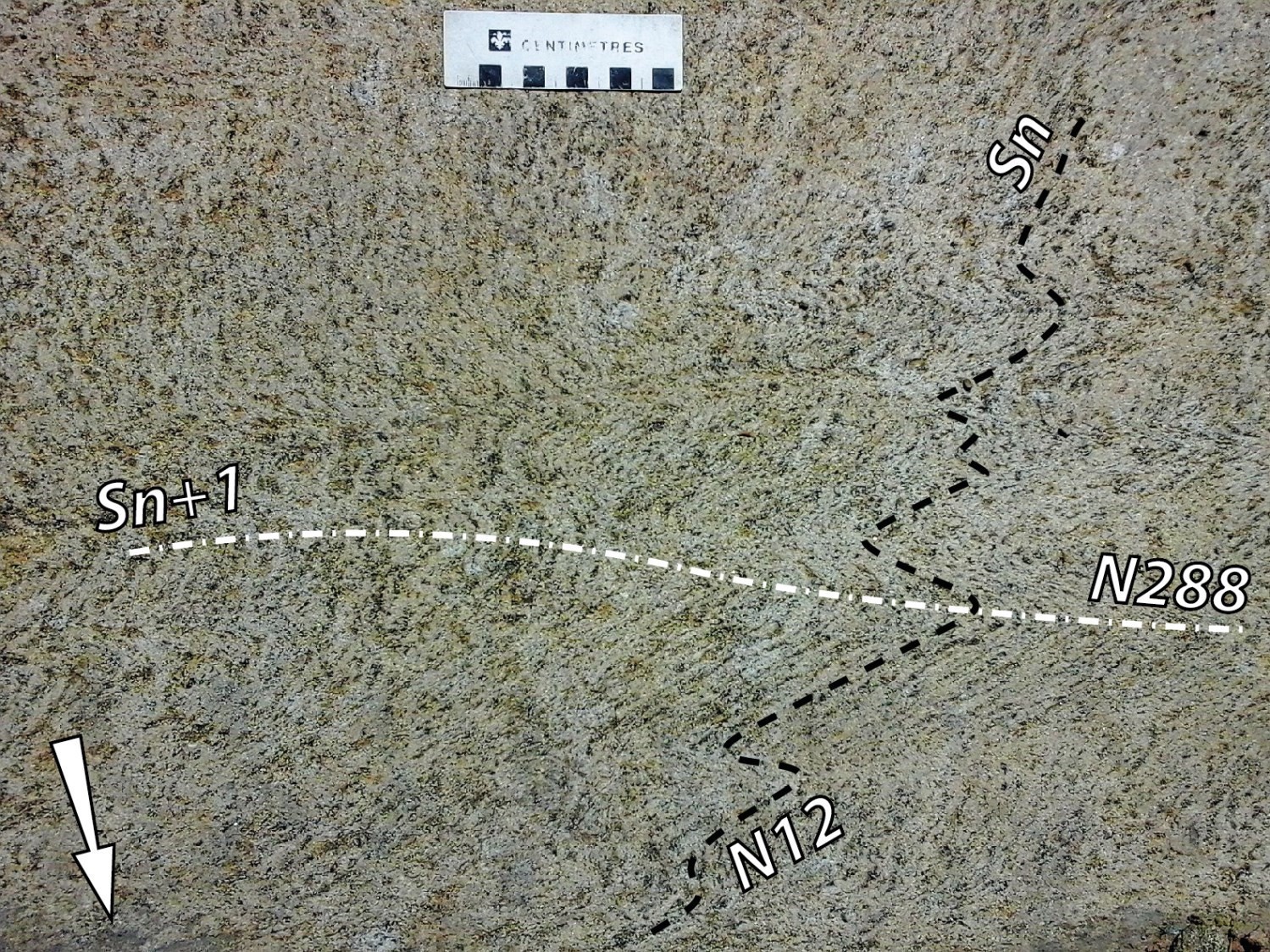 The main Sn fabric of the Sainte-Hedwidge Structural Domain is a regional penetrative foliation. Indeed, it can be observed in all units of the domain, with the probable exception of the Claire Gabbronorite. In Barrois Complex metasedimentary rocks, the Sn foliation is marked by migmatitic banding, or gneissosity characterized by alternating leucocratic and mesocratic to melanocratic millimetric to centimetric bands. In intrusive rocks of the Mimosa Plutonic Suite, the Sn fabric is expressed by a diffuse tectonometamorphic foliation marked by the preferential orientation of ferromagnesian minerals. On the other hand, the available structural data do not indicate whether the foliation that locally affects mafic rocks of the Claire Gabbronorite is associated with the Dn deformation phase. In these rocks, foliation is often marked by strong flattening of constituents, and as such would be more compatible with the Sn+1 foliation (see below).

The stereographic projection of Sn foliation measurements shows that it is generally NW-SE oriented and has a fairly variable dip, but usually NE oriented. However, on a map, the Sn foliation trajectory draws, in the southern part of the domain, tight, isoclinal folds that easily explain the variability of the measured data. 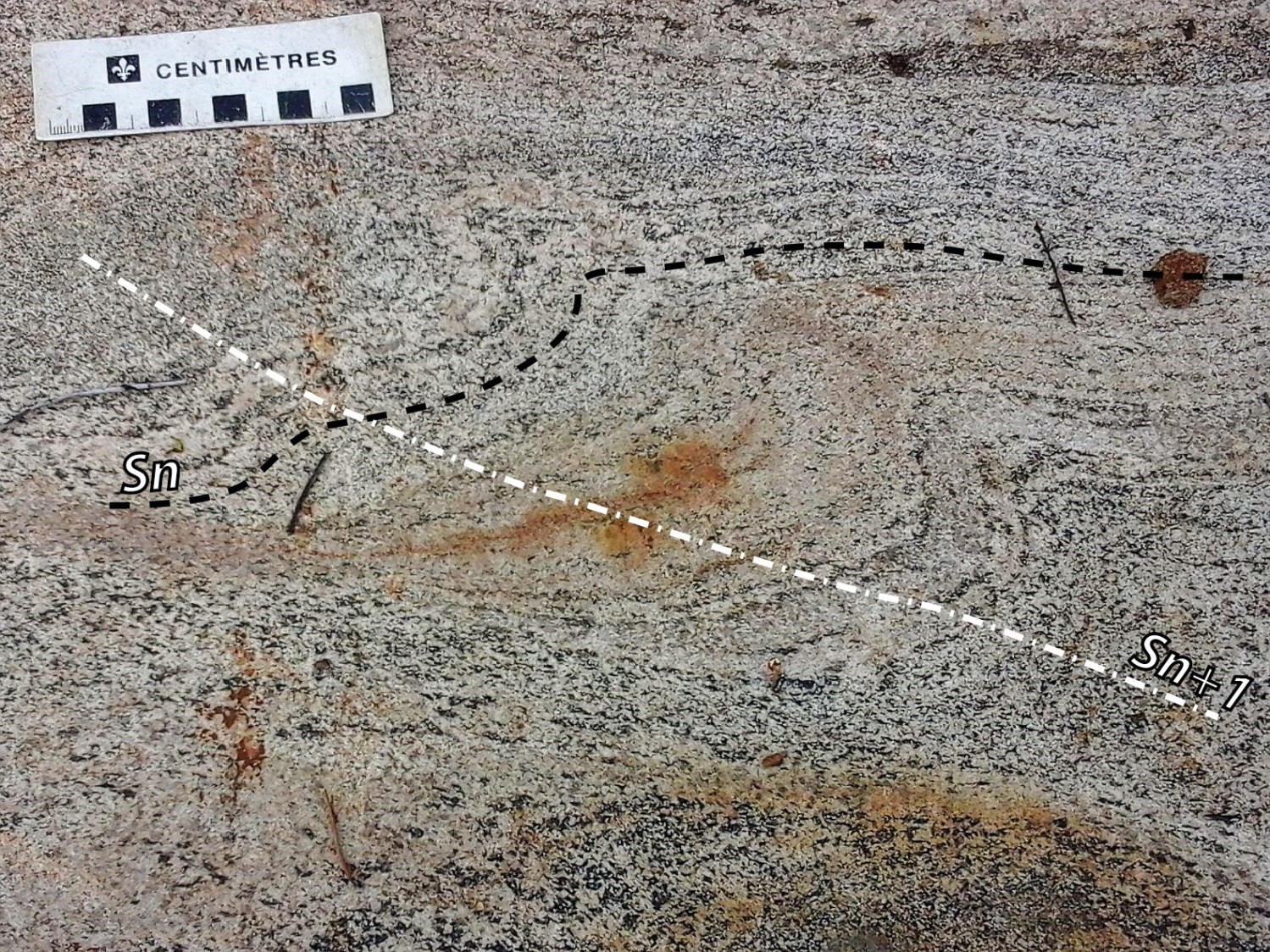 The Sn fabric is generally overprinted by a second Sn+1 tectonometamorphic foliation, which has not been measured a lot so far. It would appear that one of the reasons for this lack of measurements is that the majority of outcrops visited show Sn and Sn+1 foliations with mixed planes. The first is the only one that is consistently measured, since it is by far the most obvious. However, some outcrops show that Sn migmatitic banding or gneissosity is locally boudinaged and that quartz grains in more leucocratic bands are generally flattened. These characteristics suggest that the Sn+1 foliation is actually ubiquitous across the Sainte-Hedwidge Structural Domain. In any case, in Pn+1 regional fold hinges (see below), the presence of a second tectonometamorphic foliation that crenulates the first is indisputable. This Sn+1 foliation is diffuse, but less than the first. In outcrop, it appears mainly marked by the flattening of quartz grains and the preferential orientation of biotite flakes. Although there is virtually no measurement, the Sn+1 fabric appears to be an axial-plane foliation of Pn+1 folds. 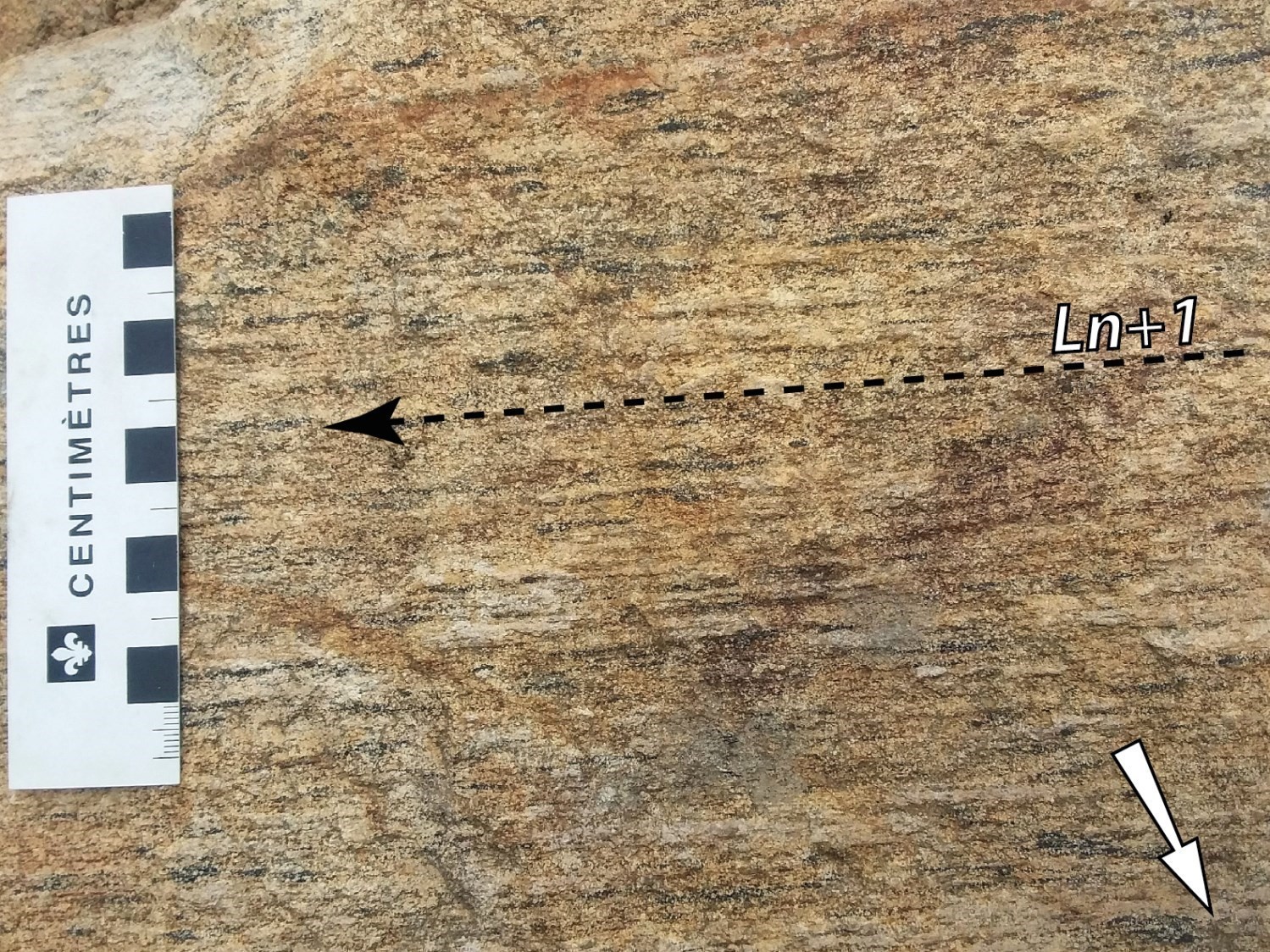 A mineral and stretch lineation is commonly observed in the Sainte-Hedwidge Structural Domain. This lineation is particularly marked by the elongation of ferromagnesian mineral clusters, and to a lesser extent by stretching of quartzofeldspathic aggregates. In the most deformed facies, lineation is dominant over foliation, which may even be locally non-existent (linear tectonite). At the Sainte-Hedwidge Structural Domain scale, the lineation is statistically directed to the SE and its dip is moderate. On the map, it shows directions that are statistically subparallel to Pn+1 axial plane traces (see below), except in the western part of the domain. This suggests that most of the measured mineral and stretch lineations are attributed to the Dn+1 deformation phase. 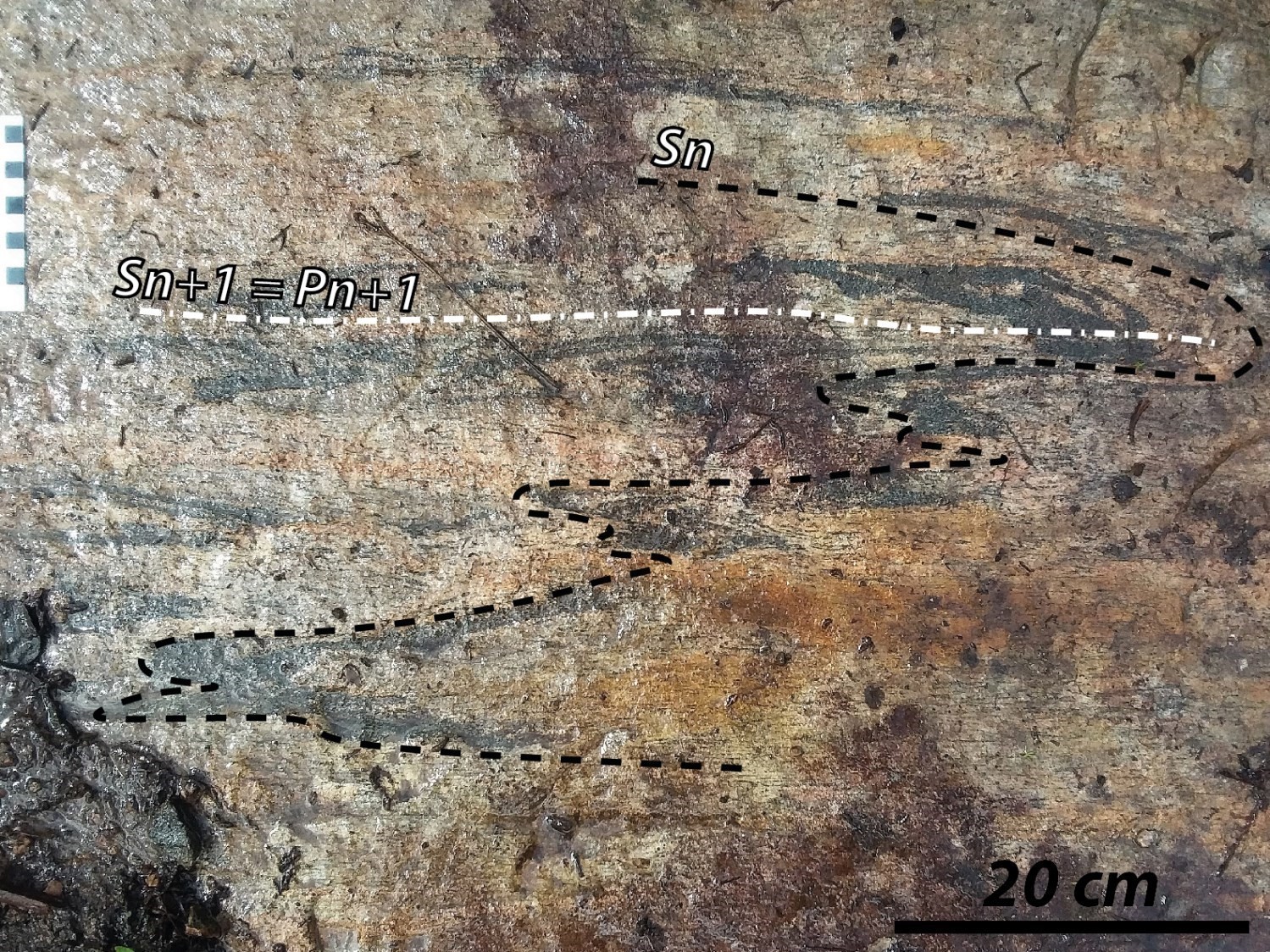 On a map, the Sn foliation trajectory draws tight to isoclinal Pn+1 folds, which have a wavelength of ~5 km and amplitude of several tens of kilometres. Pn+1 axial plane traces are curvilinear and generally oriented NW-SE; they become N-S in the western part of the Sainte-Hedwidge Structural Domain. The attitude of foliation measurements (mostly reflecting the strong transposition between Sn and Sn+1), collected on both sides of axial plane traces, suggests that Pn+1 folds are systematically overturned towards the SW. The axial planes’ dip appears to be between 50° and 70° on average. At the outcrop scale, comparable folds can be observed locally, especially in paragneiss of the Barrois Complex.

The analysis of high-resolution magnetic maps, available in the Commissaires Lake area, allowed for the identification of a number of faults cutting the Sainte-Hedwidge Structural Domain. 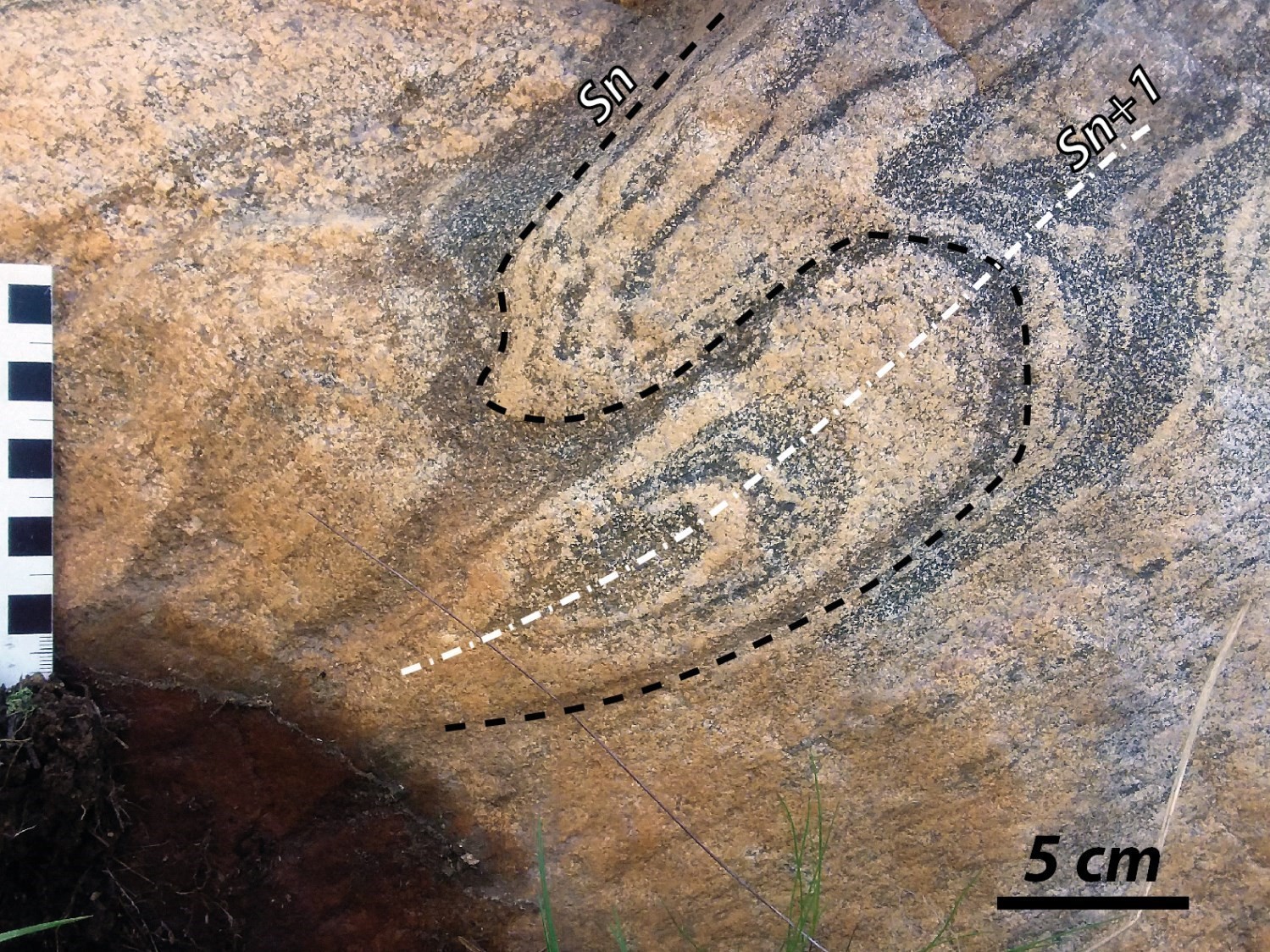 The Sainte-Hedwidge Structural Domain shows polyphase deformation consisting of at least two regional folding phases. The Sn foliation, marked by migmatitic banding or paragneiss gneissosity in the Barrois Complex and Mimosa Plutonic Suite, defines the deformation phase considered to be the earliest in the domain to date. The Sn foliation trajectory draws tight to isoclinal Pn+1 folds, with axial plane traces oriented NW-SE to N-S, and associated with a Sn+1 axial plane foliation. These structural characteristics indicate that, in the southern part of the Sainte-Hedwidge Structural Domain, the Dn+1 deformation phase is associated with a major crustal NE-SW to E-W shortening event. This episode is probably partly accommodated by intense lateral stretching of the affected units. This interpretation is based on the Ln+1 lineation attitude and the local presence of a fold geometry reminiscent of sheaths, whose axes appear to be more or less parallel to the lineation. Finally, a Dn+2 event of NNW-SSE oriented compressive deformation appears to have slightly folded Pn+1 axial plane traces.

Slightly more than 40 selected samples, representative of stratigraphic units of the Sainte-Hedwidge Structural Domain in sheets 32A07 and 32A08, were studied in thin section to define their metamorphic characteristics. Thus, mineralogical assemblages and structural characteristics of these samples indicate that the domain has recorded amphibolite to granulite facies metamorphic conditions.

The constant presence of orthopyroxene in felsic and intermediate rocks of the Mimosa Plutonic Suite, as well as clinopyroxene more sporadically (associated with biotite and hornblende), is indicative of granulite facies temperature conditions. At the same time, these rocks generally show coarse grain size and interlobed texture. Indeed, borders are often well rounded between quartz and feldspar grains. Locally, some quartz grains have an amoeboid shape. These characteristics indicate high-temperature dynamic recrystallization (Gower and Simpson, 1992). Also, quartz grains commonly display a chessboard texture that reflects combined intracrystalline slippage along crystallographic directions a and c during deformation at ≥600°C (Blumenfeld et al., 1986; Gapais and Barabarin, 1986).

Whereas the core of the domain shows petrological evidence in favour of granulite facies metamorphism, the border along which metasedimentary rocks of the Barrois Complex are mainly distributed is rather characterized by amphibolite facies mineralogical assemblages. Whether felsic to intermediate intrusive or metasedimentary rocks, mineralogical assemblages are characterized by the almost constant presence of biotite and hornblende, and the absence of pyroxene.

The high-resolution total magnetic field map of sheets 32A07, 32A08, 32A09 and 32A10 shows that the Sainte-Hedwidge Structural Domain is mainly characterized by an annular pattern, but with areas of very contrasting magnetic susceptibility. The core of the Mimosa Plutonic Suite, which approximates the centre of the domain, shows a moderate, heterogeneous and granular magnetic susceptibility. The ring around it has intense but discontinuous susceptibility. This ring coincides approximately with the range of the Claire Gabbronorite, along the eastern and southern edges of the Mimosa Plutonic Suite or the Barrois Complex. Outward of the Sainte-Hedwidge Structural Domain, the magnetic pattern becomes more heterogeneous and the susceptibility is generally low to moderate.