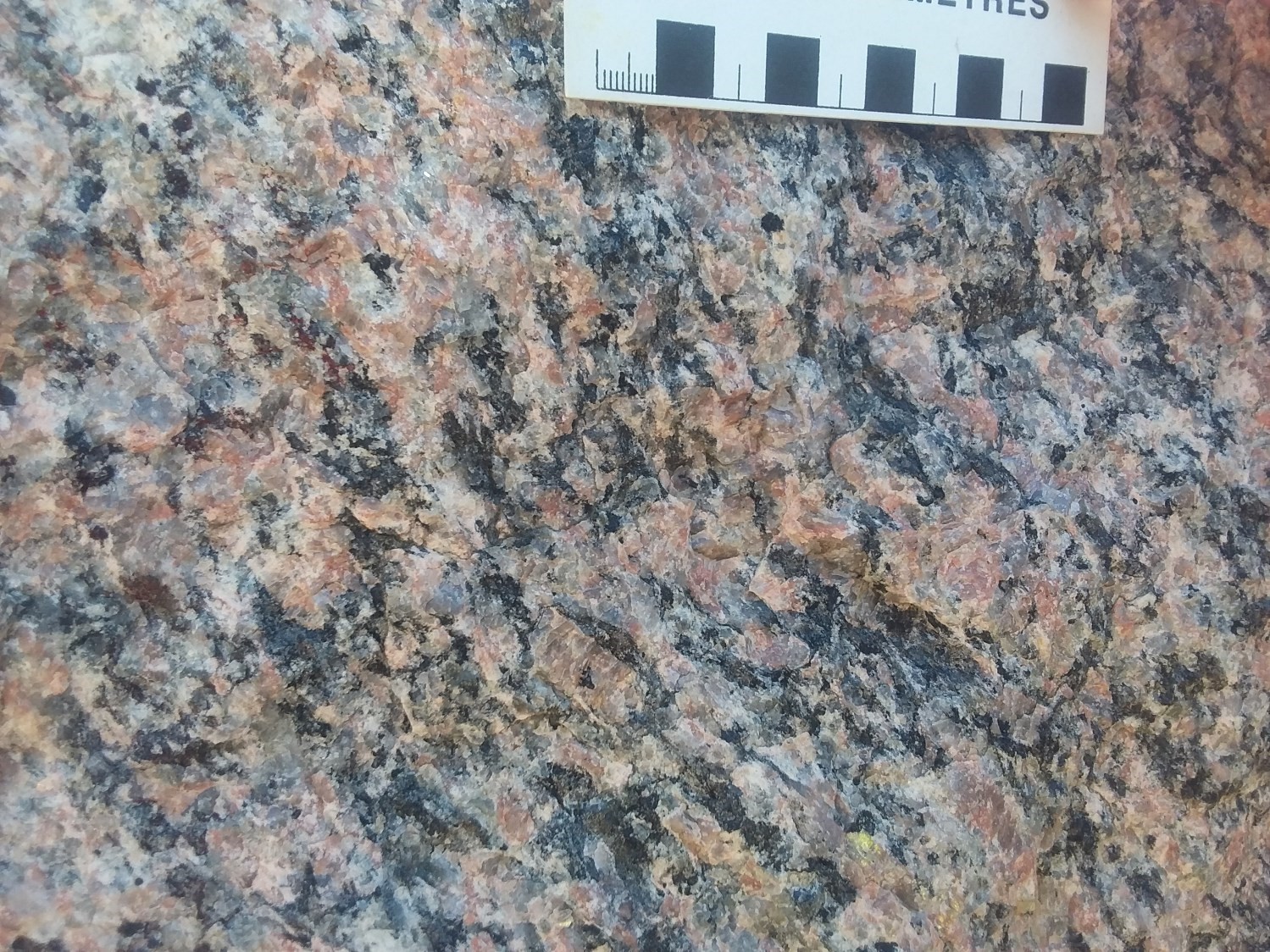 The Sainte-Hedwidge Intrusive Suite was defined by Moukhsil and Daoudene (2019) during the mapping of the southwestern region of Lake Saint-Jean (NTS sheet 32A08).

The Sainte-Hedwidge Intrusive Suite is a polyphase batholith whose composition varies from gabbronorite to granite through syenite. It is subdivided into two informal units, mPshe1 and mPshe2, which are kilometre-thick and very magnetic. They are easily identifiable on aeromagnetic maps (Intissar and Benahmed, 2015). 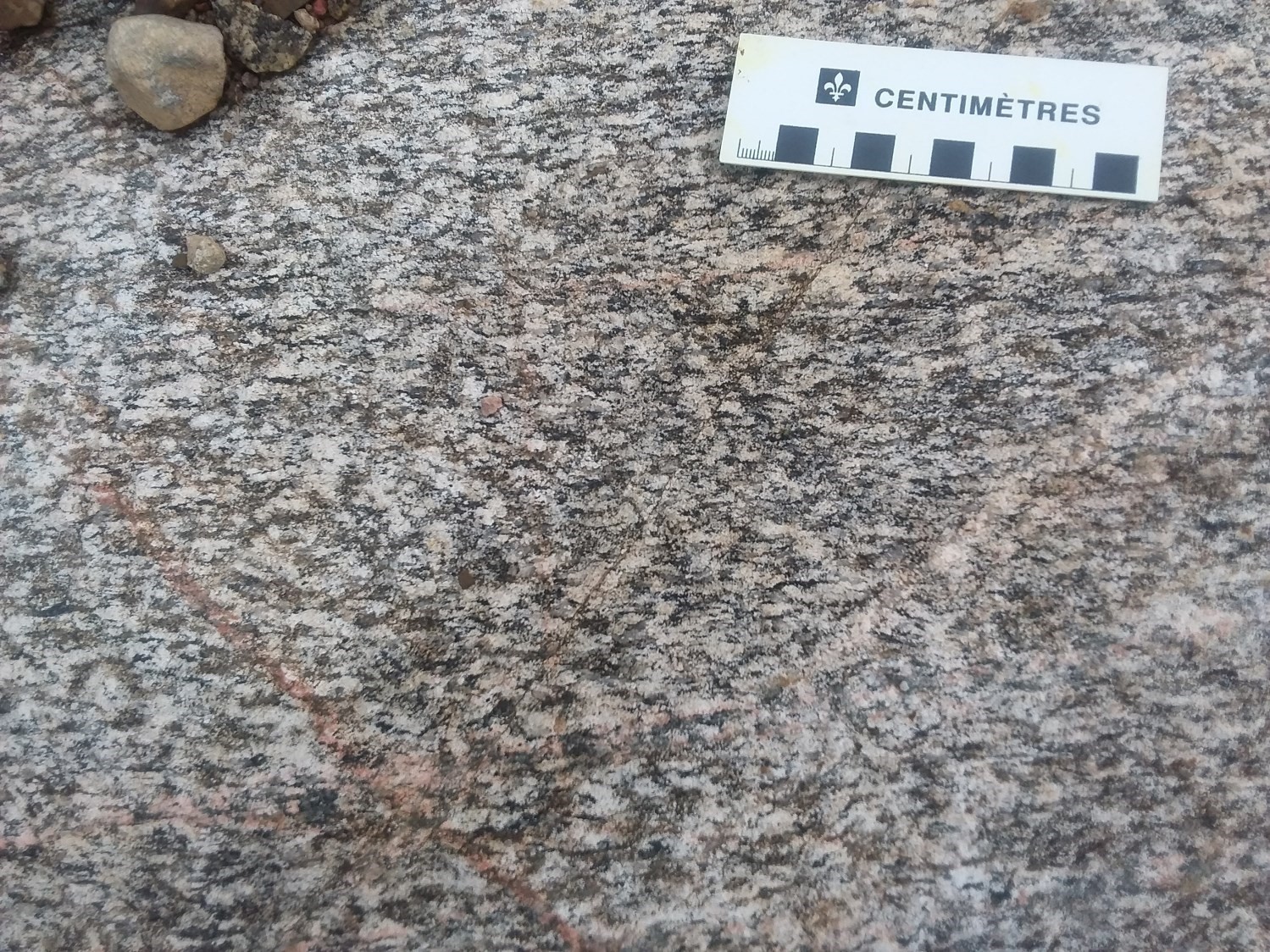 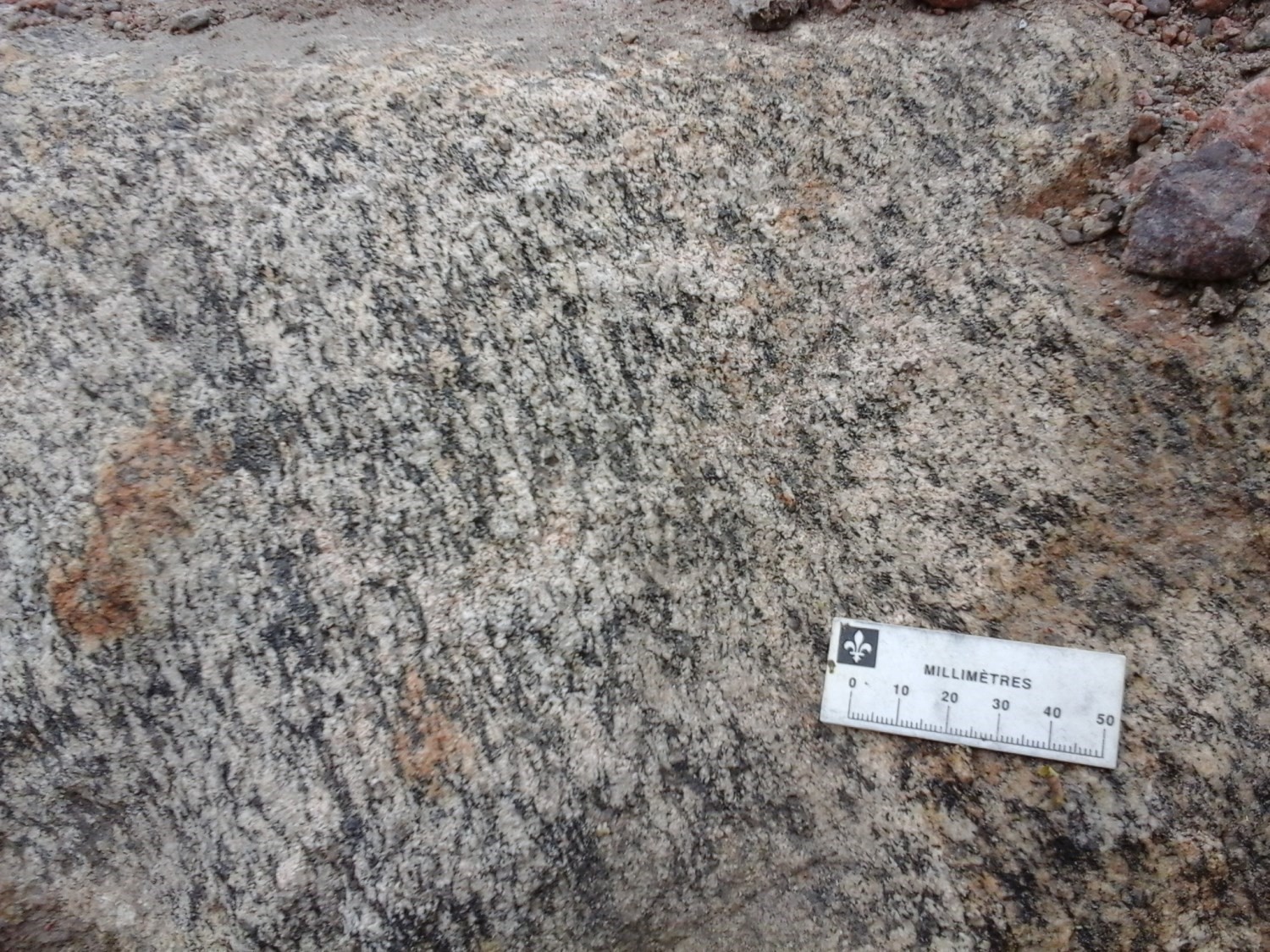 Jotunite (hypersthene monzodiorite) is similar to quartz monzodiorite at all points except that the former contains hypersthene (5% of the rock). Quartz monzonite is beige-pink in altered patina and salmon pink in fresh exposure. It contains K-feldspar, plagioclase, biotite and hornblende. It is foliated, K-feldspar porphyritic and locally porphyroclastic. 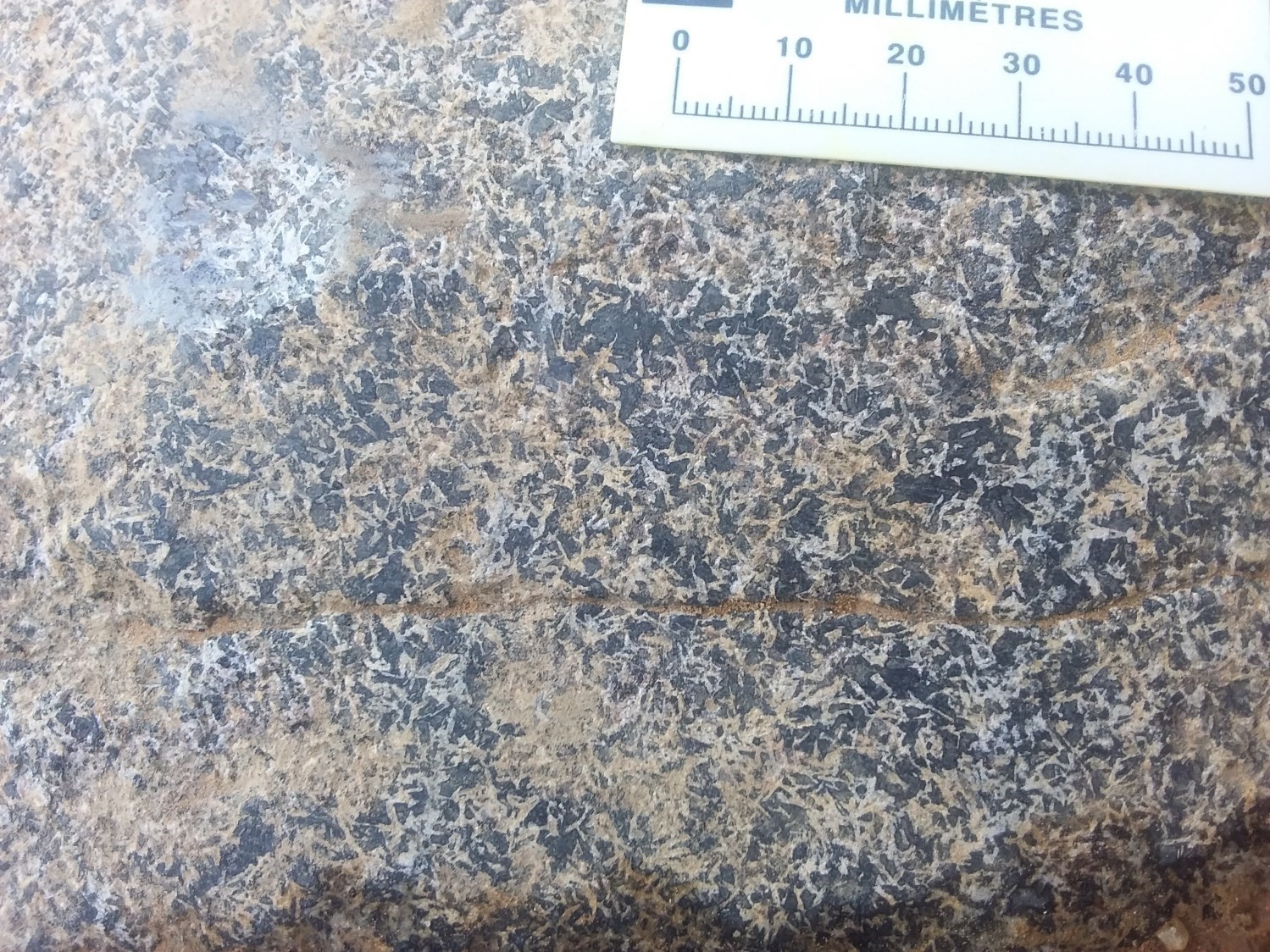 Gabbronorite is observed in several places in the intrusion and appears to be intruding into the unit’s intermediate facies. It is massive and has an ophitic to subophitic texture, containing ~55% green hornblende and 40% sericitized plagioclase. The rest of the rock consists of small garnet grains and chloritized and epidotized (pistachite) biotite crystals. In several locations, gabbronorite contains orthopyroxene.

Syenogranite and monzogranite, which account for a small proportion of this suite, outcrop locally as intrusions into the remaining facies of this unit. 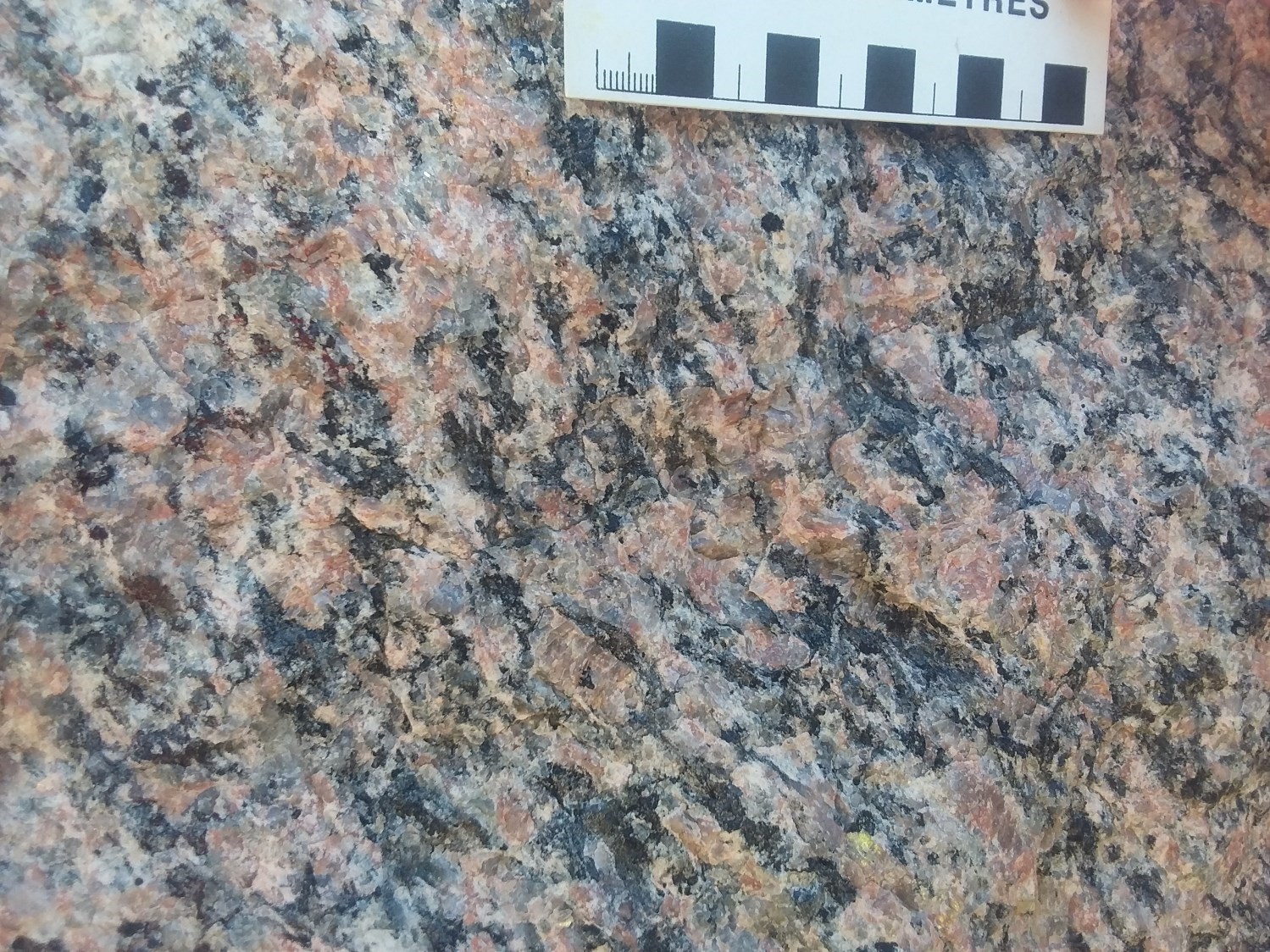 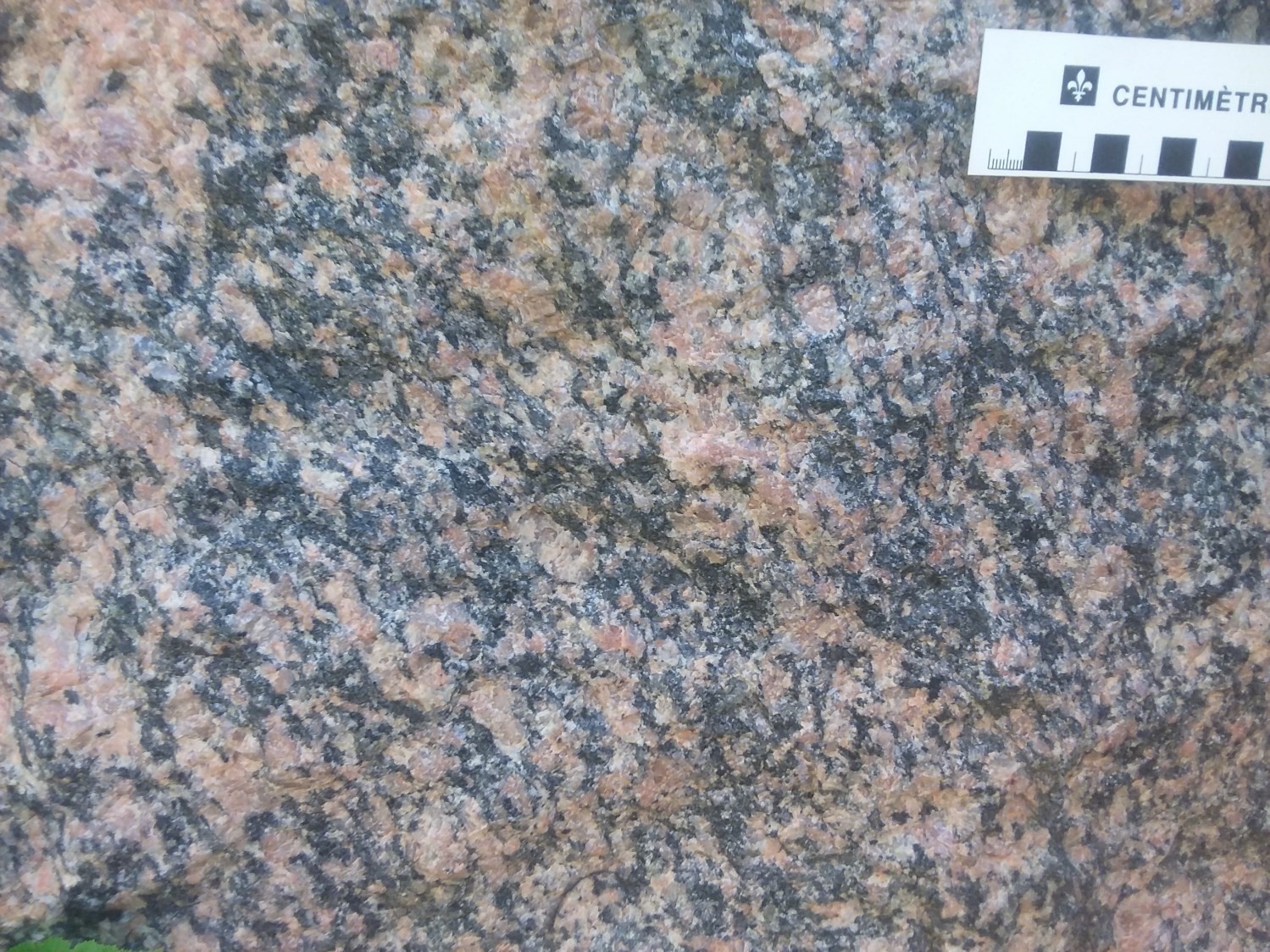 Unit mPshe2 consists mainly of quartz syenite, mangerite, syenogranite and alkaline feldspar granite. Some outcrops of this unit consist of gabbronorite and rarely granitic gneiss. Syenogranite is pink-grey in altered patina and pink in fresh exposure. It is massive and commonly K-feldspar-plagioclase porphyritic. Phenocrystals are 2 to 3 cm long and form about 25% of the rock. Quartz syenite and alkaline feldspar granite are difficult to distinguish in the field because the quartz content varies from one outcrop to another (6-25%). They are both greyish to salmon pink in fresh exposure and K-feldspar porphyritic, diplaying phenocrystals throughout the rock. 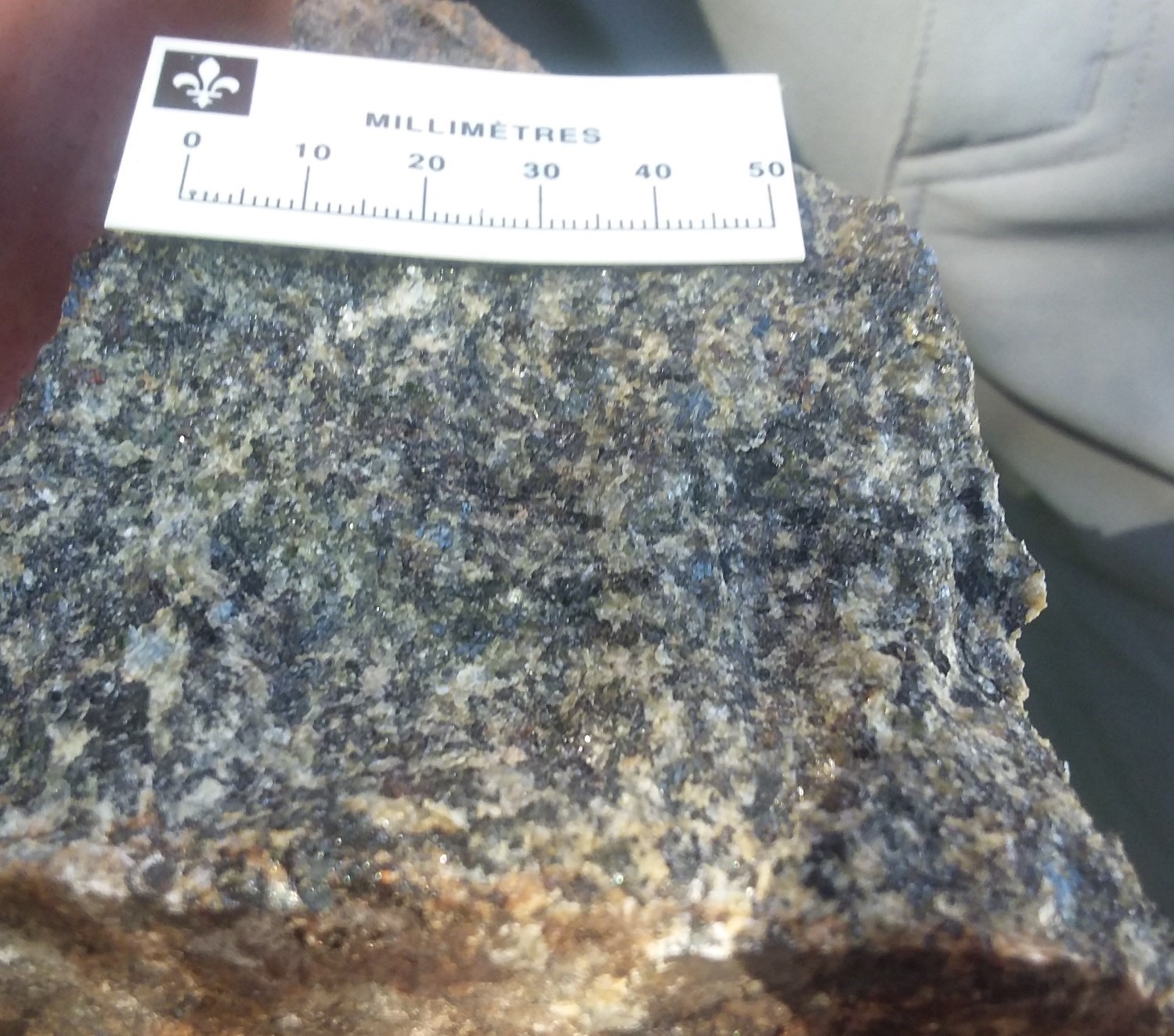 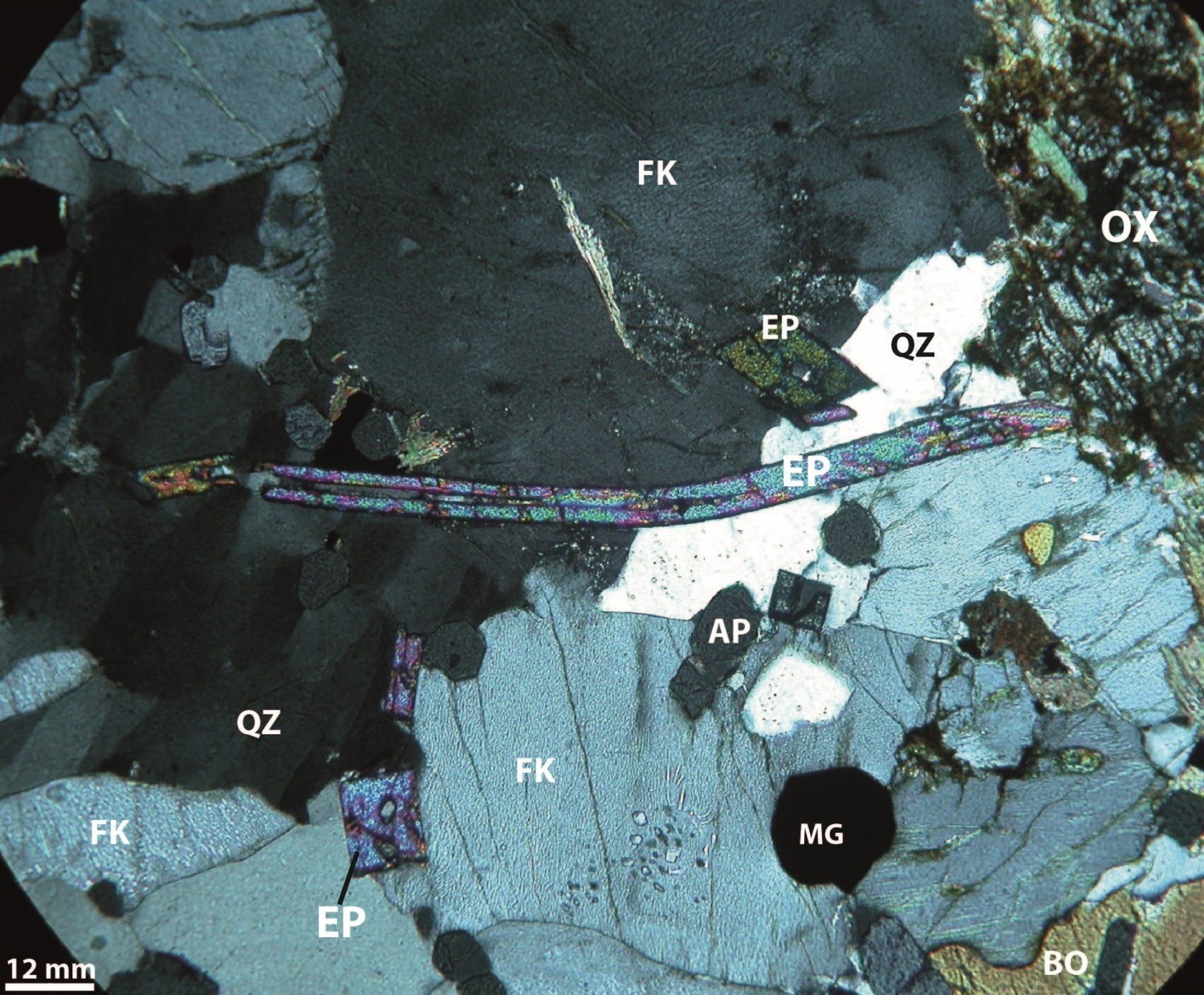 Syenogranite is medium to coarse grained, foliated and contains quartz, K-feldspar, plagioclase and hornblende. Alkaline feldspar granite is salmon pink in fresh and altered surfaces. It is fine to medium grained and composed of microcline, large quartz zones displaying undulatory extinction, biotite and accessory minerals (zircon, epidote, apatite). Gabbronorite is coarse grained, granoblastic and shows the same mineralogy as unit mPshe1, but without the ophitic texture. Granitic gneiss is banded and contains alternating grey bands and K-feldspar-rich pink bands. It is generally observed at the edge of the intrusion and could be a metasedimentary facies intruded by granitic dykes, all of which have been extensively transposed following extensive deformation. In fact, decametric klippes of metasedimentary rocks (Barrois Complex) are observed in this unit.

This unit is located in the northern region of sheet 32A08. Interpretation of regional aeromagnetic maps indicates its extension in sheet 32A09 (Intissar and Benahmed, 2105). It is roughly N-S oriented and has a long axis of 36 km and a maximum width of 14 km (centre of intrusion). Unit mPshe2 is very magnetic and easily identifiable on aeromagnetic maps, whereas only the centre of unit mPshe1 is magnetic.

The Sainte-Hedwidge Intrusive Suite is in fault contact with the Travers Suite and the Thaddé Plutonic Suite. It contains paragneiss from the Barrois Complex (mPboi4), and is intruded by centimetric to metric dykes of diorite and granitic to syenitic pegmatites.