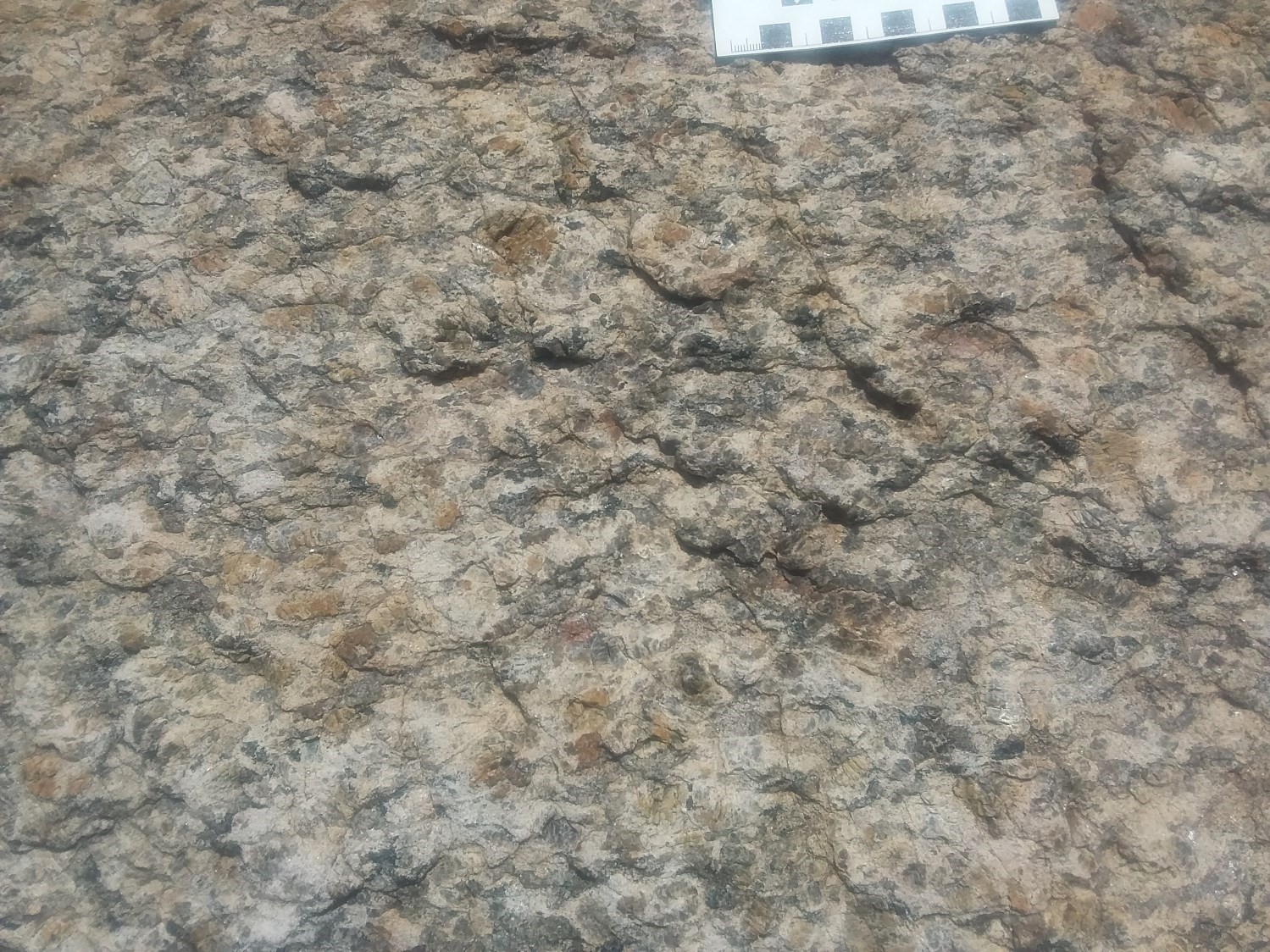 The Travers Suite is a unit introduced by Perreault (1992) during mapping of the Borgia Lake region (NTS sheet 31P16). It was defined as consisting of two felsic to mafic units: mPtra1 (gabbro, monzogabbro and mangerite) and mPtra2 (granite). During the summer 2017 mapping work, Moukhsil and Côté (2018) added lithologies to the previous two units and identified a third subdivision. A fourth informal unit was added during the work of Moukhsil and Daoudene (2019) in the Commissaire Lake region (sheets 32A01 and 32A08). The following description is of Moukhsil and Côté (2018) and Moukhsil and Daoudene (2019). 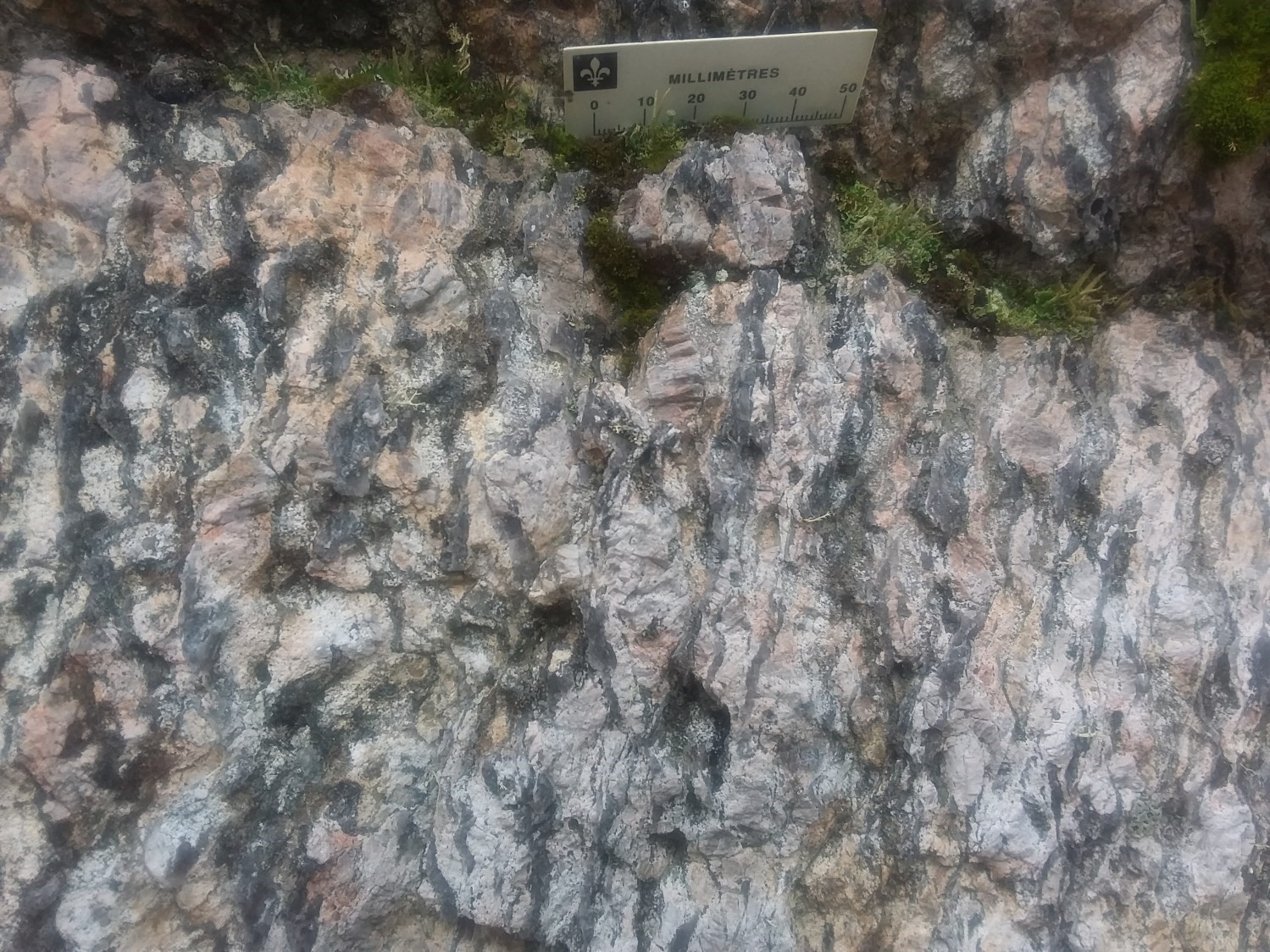 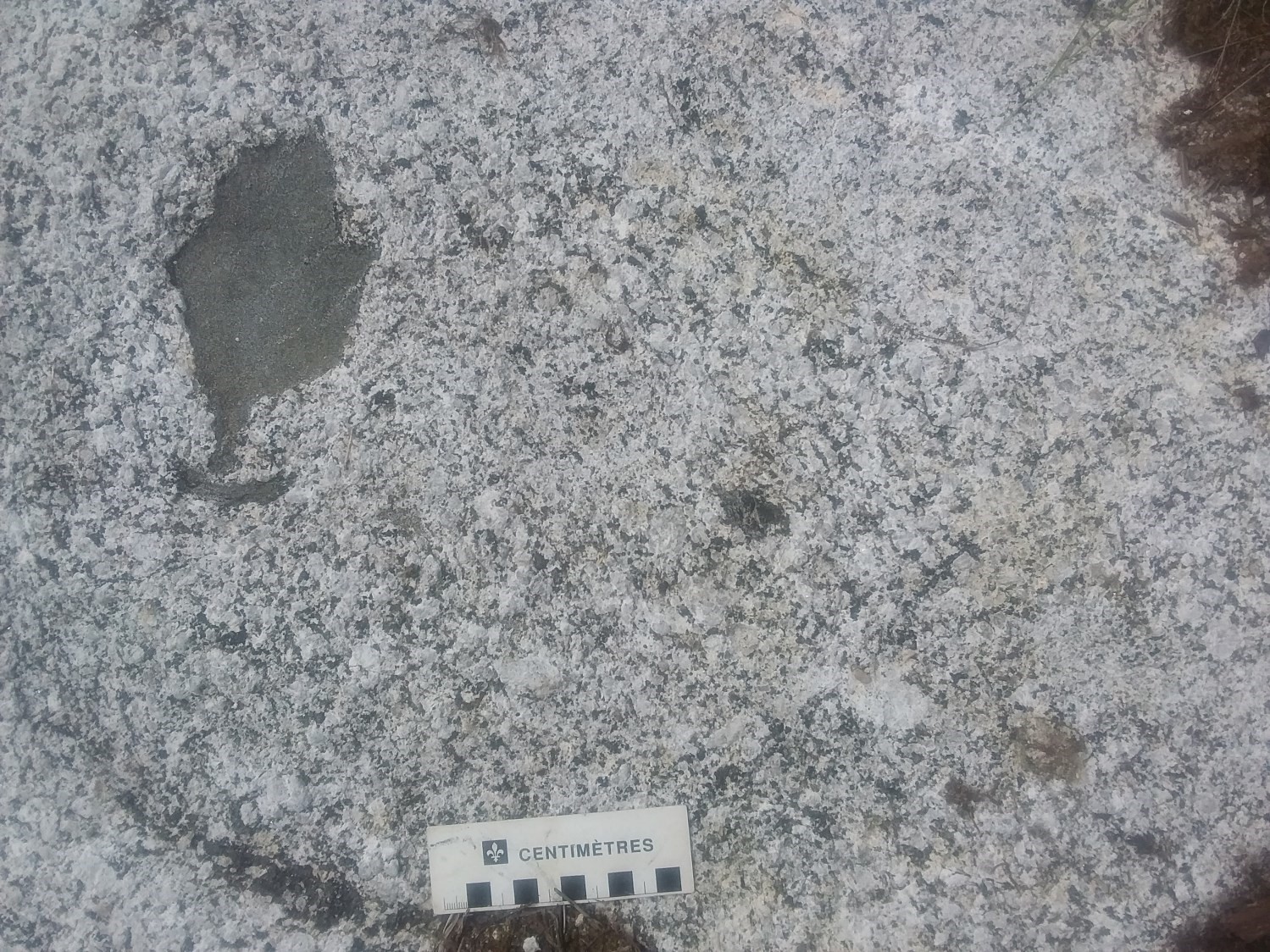 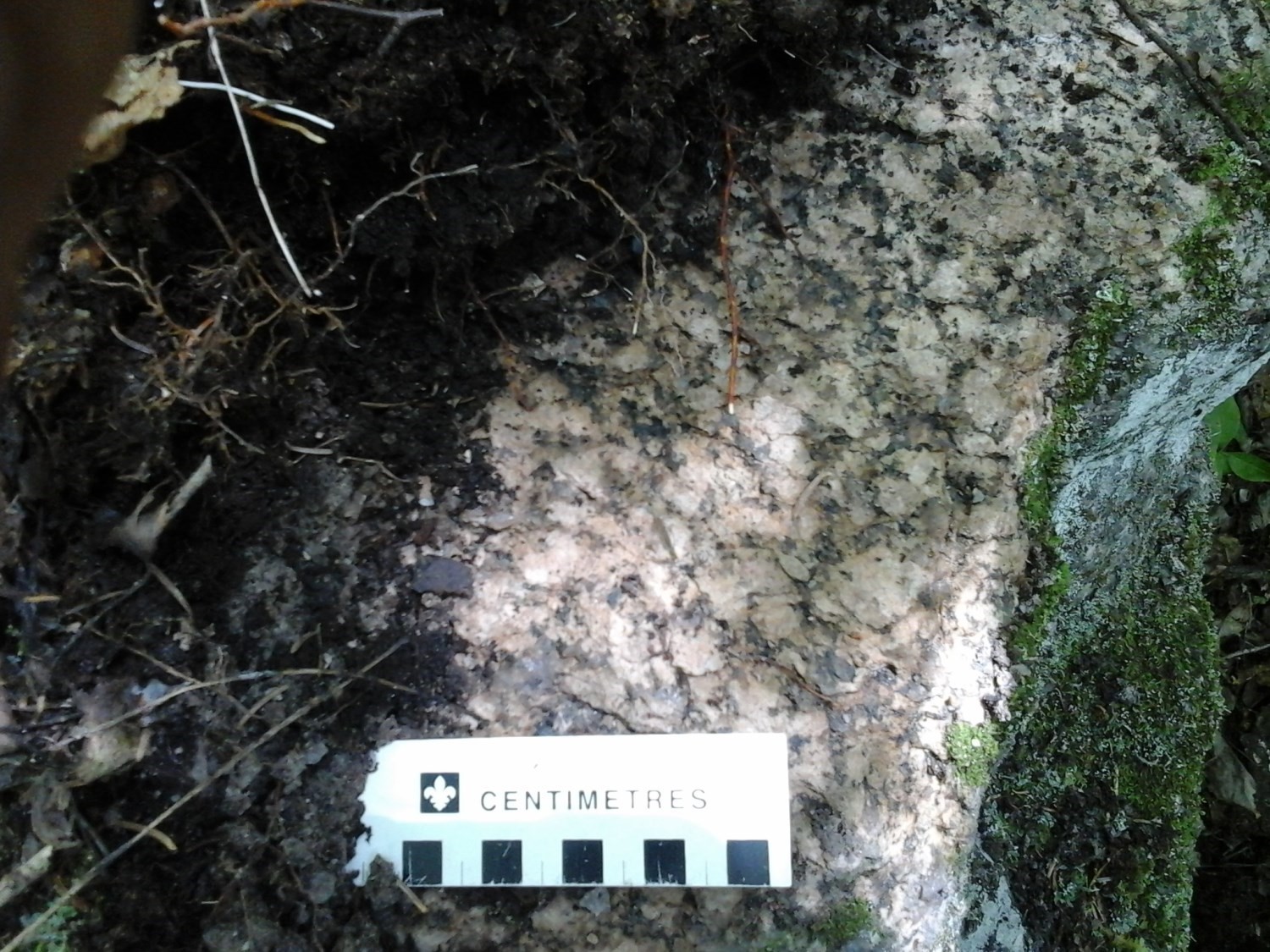 Granite and syenogranite are fine to medium grained and are composed of K-feldspar, plagioclase, quartz, biotite, clinopyroxene, zircon, apatite and opaque minerals. Biotite is found in large poikilitic tabular crystals containing quartz, or in small alteration crystals that affect clinopyroxene parallel to cleavage. K-feldspar is antiperthitic and quartz is locally myrmekitic. Granite is K-feldspar porphyritic. Rocks in this unit are heavily deformed in places, giving them a cataclastic texture. In addition, in deformation zones, plagioclase is highly sericitized and white mica (muscovite) crystals are observed. Gabbronorite has the same composition as that of unit mPtra2. Quarz syenite is medium grained and contains amphibole, microcline, sodic plagioclase and trace orthopyroxene. The unit contains centimetric to metric paragneiss enclaves. 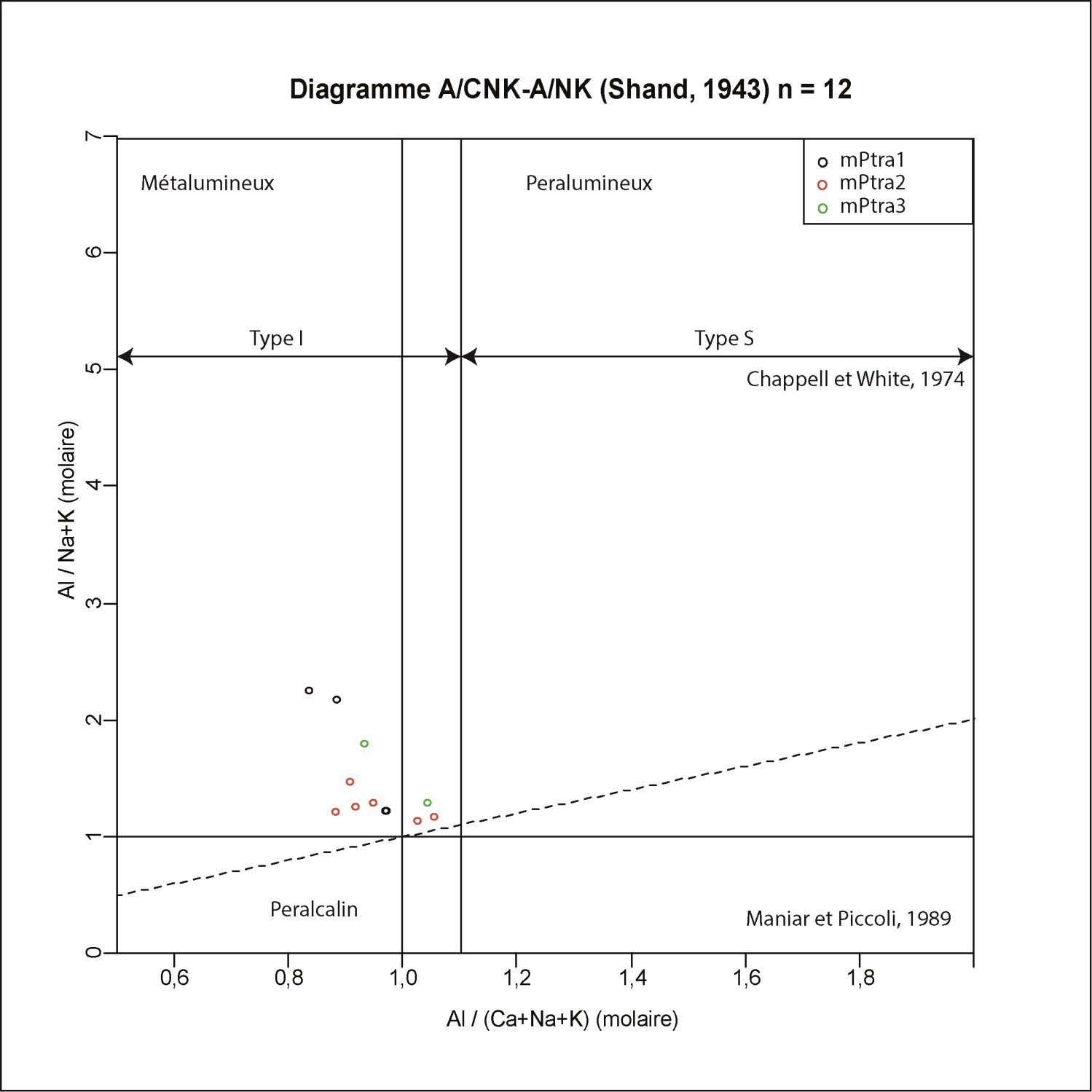 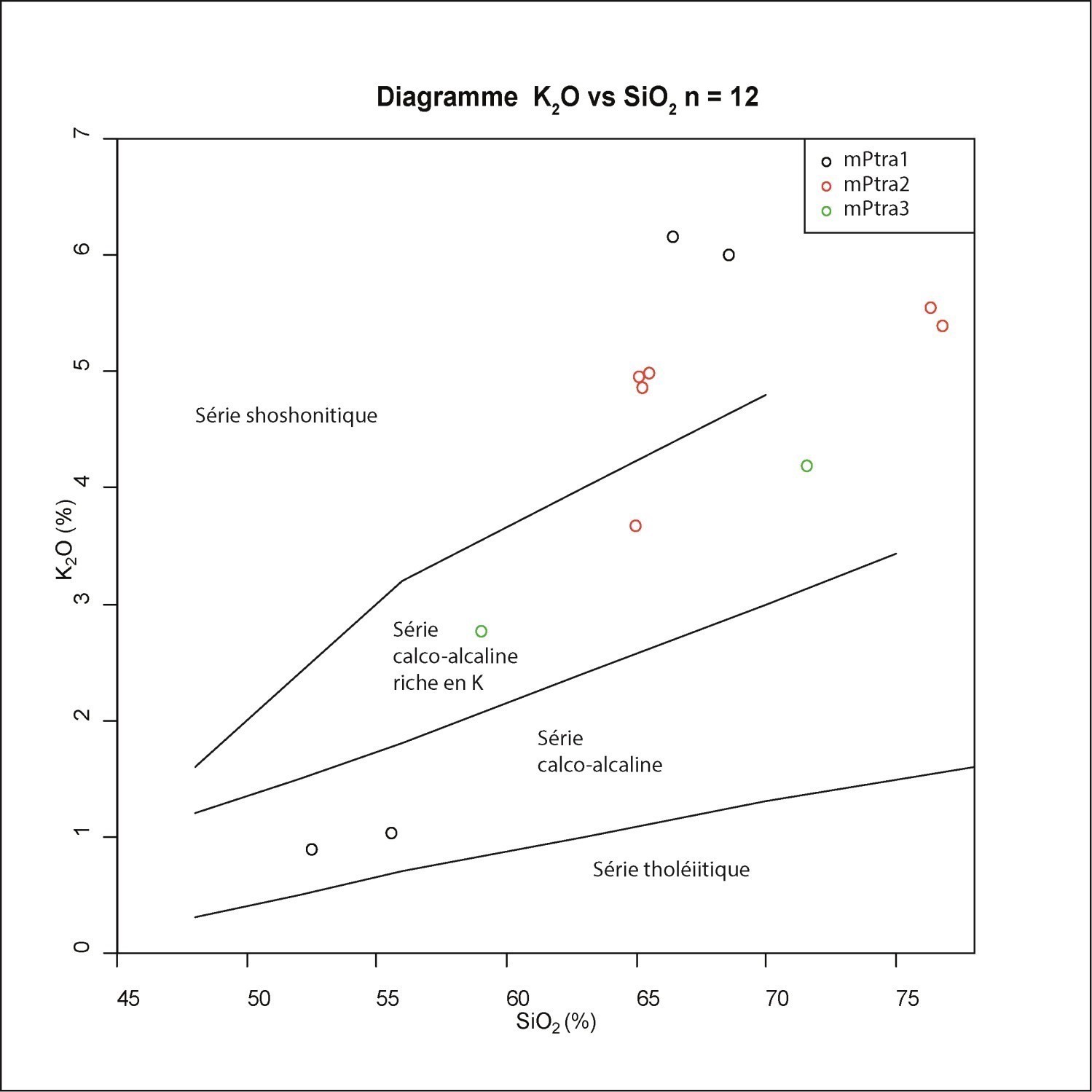 From a geochemical perspective, the Travers Suite consists of mafic to felsic rocks with SiO2 contents ranging from 52.4 to 76.69% and K2O contents from 0.9 to 5.39%. The majority of rocks in this suite are metaluminous (Maniar and Piccoli, 1989) and type I (igneous origin; Chappell and White, 1974). In addition, mafic rocks are of calc-alkaline affinity, and intermediate and felsic rocks are calc-alkaline (potassium rich) to shoshonitic (Peccerillo and Taylor, 1976).

The Travers Suite consists of two plutons located in the northeast portion of sheet 31P16, which likely extend into adjcacent sheets. The fourth unit (mPtra4) predominantly occurs as more or less thick dykes roughly N-S oriented. It intrudes into other units of the same suite.

The Travers Suite intrudes into the La Bostonnais Complex and contains klippes of the Montauban Group.