The Commissaires Structural Domain was defined by Moukhsil and Daoudene (2019) following a map survey of the Commissaires Lake area in NTS sheets 32A01, 32A02, 32A07 and 32A08.

The stratigraphic units present in the Commissaires Structural Domain are:

In sheets 32A01 and 32A02, the majority of outcrops of the Commissaires Structural Domain show only one well-developed planar structural fabric. This fabric is mainly expressed by gneissosity of most intrusive rocks of the La Bostonnais Complex, and by migmatitic banding of metasedimentary rocks of the Wabash Complex. For this reason, and since the measurement trajectory of this planar structural fabric appears to be continuous from one outcrop to the other, almost all measurements of gneissosity, migmatitic banding and tectonic foliation are attributed to Sn. Gabbros of the Roc Suite, which is currently the youngest stratigraphic unit in the domain (see section “Chronological Markers”), appear to be affected by the Sn fabric. This suggests that the associated Dn deformation is Grenvillian, that is, aged between ~1.085 Ga and 0.986 Ga (Gower and Krogh, 2002). Since the Grenvillian orogenic phase is the most recent of those recorded throughout the Grenville Province (e.g., see Moukhsil and Solgadi, 2018), planar structural fabrics associated with at least one earlier orogenic phase (Dn-1) could be identified later in the Commissaires Structural Domain. This is why it was chosen to match the Sn foliation to S2 in “geofiches” of the area, not S1. A second tectonometamorphic foliation may locally be observed. It occurs mainly as a mineral foliation with penetrative biotite or a very discrete schistosity, often parallel to fold axial planes that affect gneissosity or migmatitic banding. This second foliation is here referred to Sn+1. 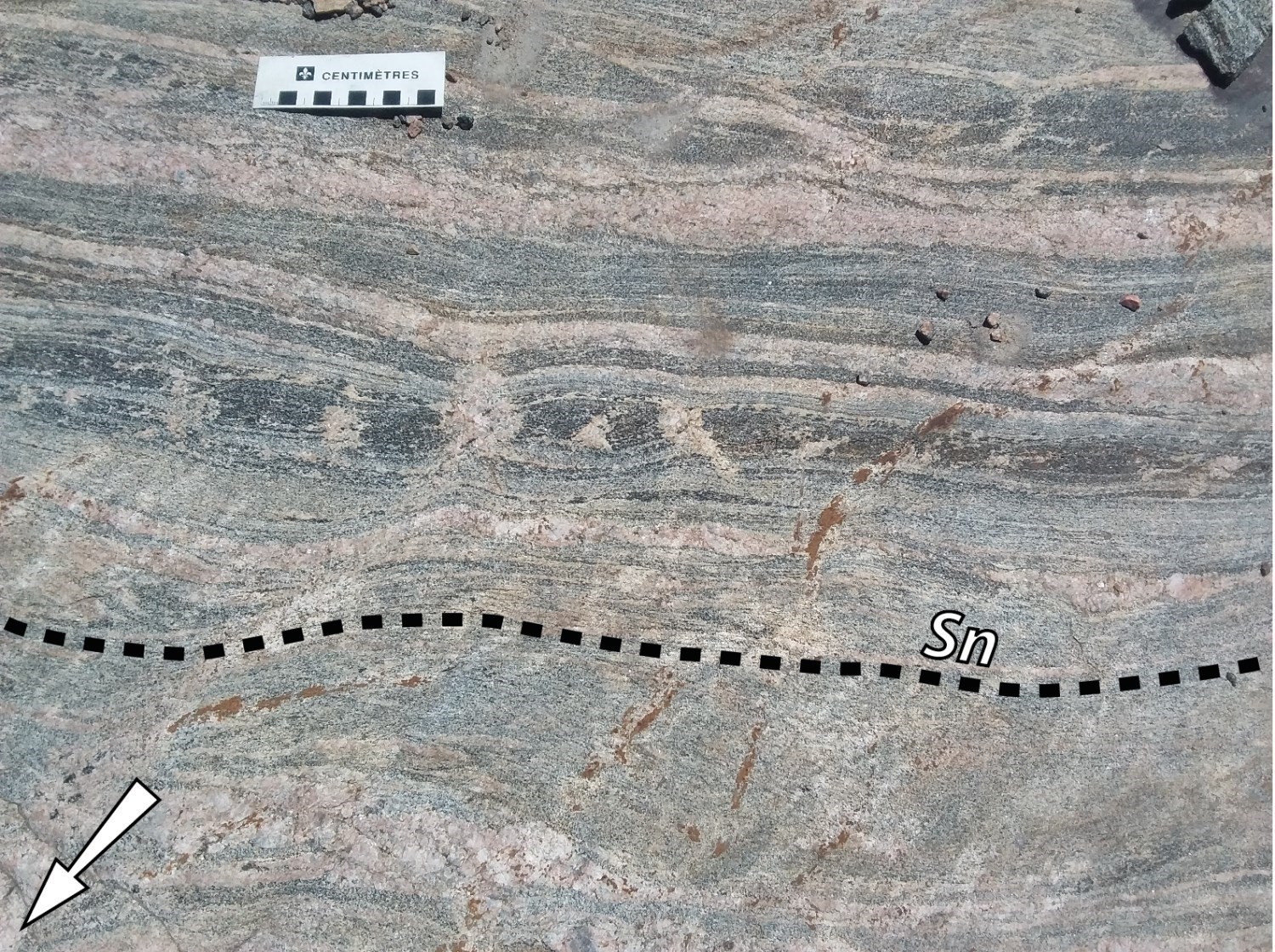 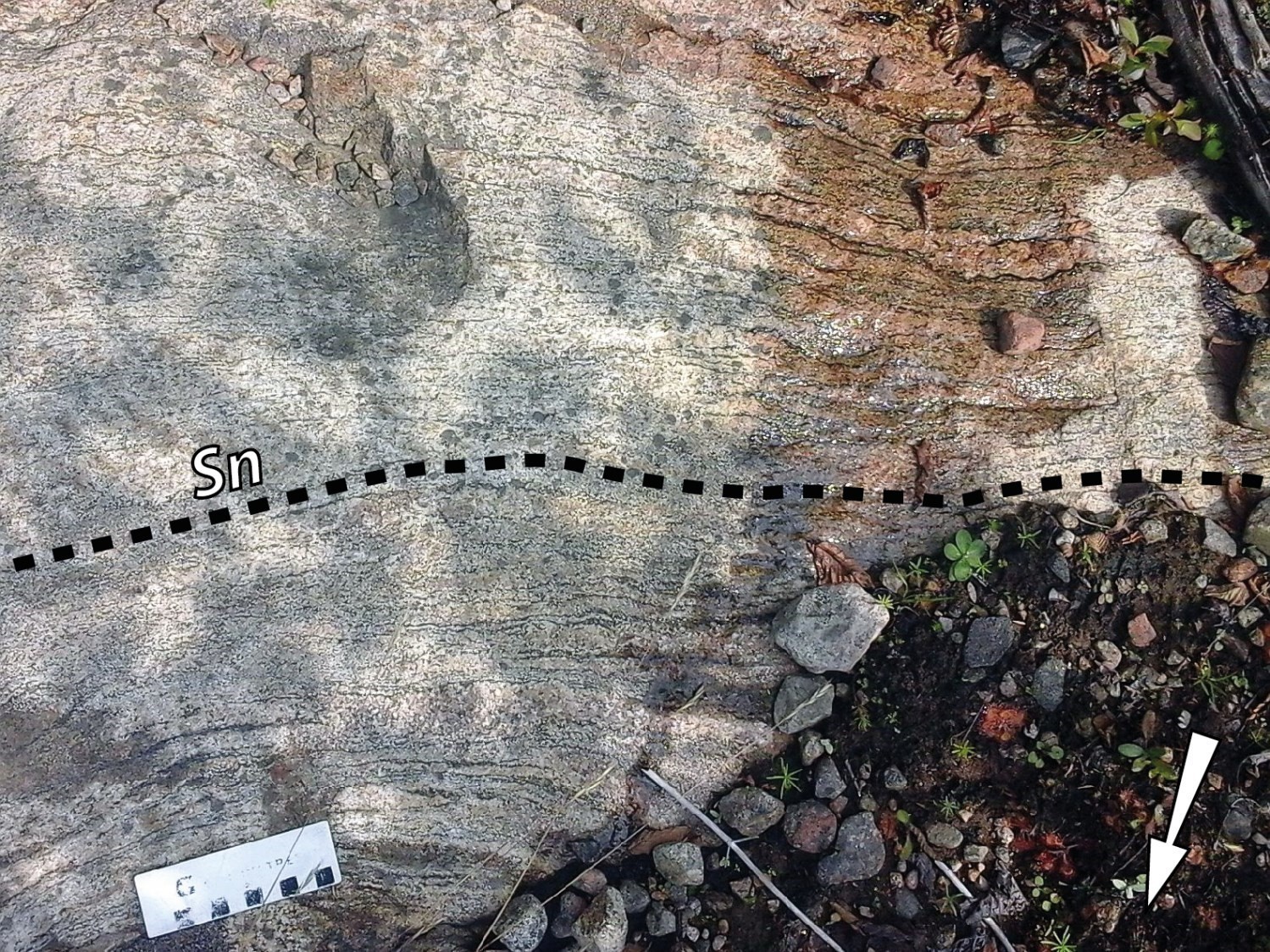 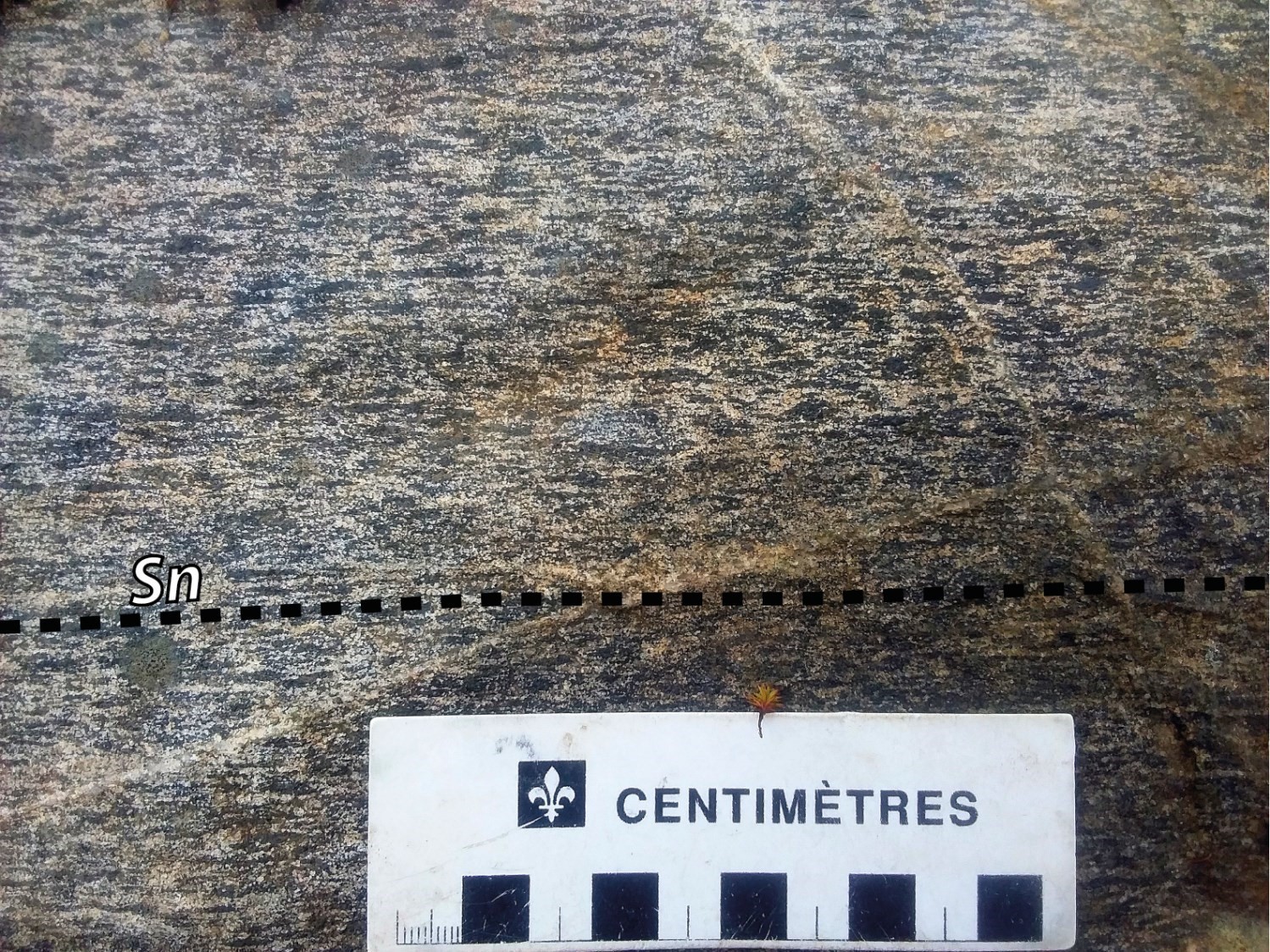 The Commissaires Structural Domain is mainly affected by a planar tectonic fabric Sn. This foliation is generally well developed in most stratigraphic units of the domain. In the La Bostonnais Complex (mPbos5), it is marked by a rather characteristic gneissosity, consisting of centimetric to decimetric alternating greyish horizons rich in ferromagnesian minerals and whitish to pinkish bands that are poor in ferromagnesian minerals. At the outcrop scale, gneissosity is often straight. In partially melted metasedimentary rocks of the Wabash Complex, the Sn foliation is highlighted by migmatitic banding. It is expressed by alternating centimetric bands of whitish mobilisate and dark mesosome or paleosome. Other intrusive rock facies also clearly show that the Sn foliation is highlighted by the flattening of quartz grains and ferromagnesian mineral clusters.

At the sheets 32A01 and 32A02 scale, Sn foliation measurements are distributed around an NE-SW-oriented mean plane and have shallow dip (27°) towards the SE. However, the stereographic projection of Sn poles shows that they are distributed rather sparsely in the NW quarter of the canvas. This indicates that at the domain scale, the Sn foliation is not always straight, which is also confirmed by the foliation trajectory attitude interpreted from structural data and magnetic lineaments. In fact, while the area between the La Perche and Écarté lakes comprises straight foliation trajectories and magnetic lineaments oriented NE-SW, the Sn fabric is folded elsewhere﻿. 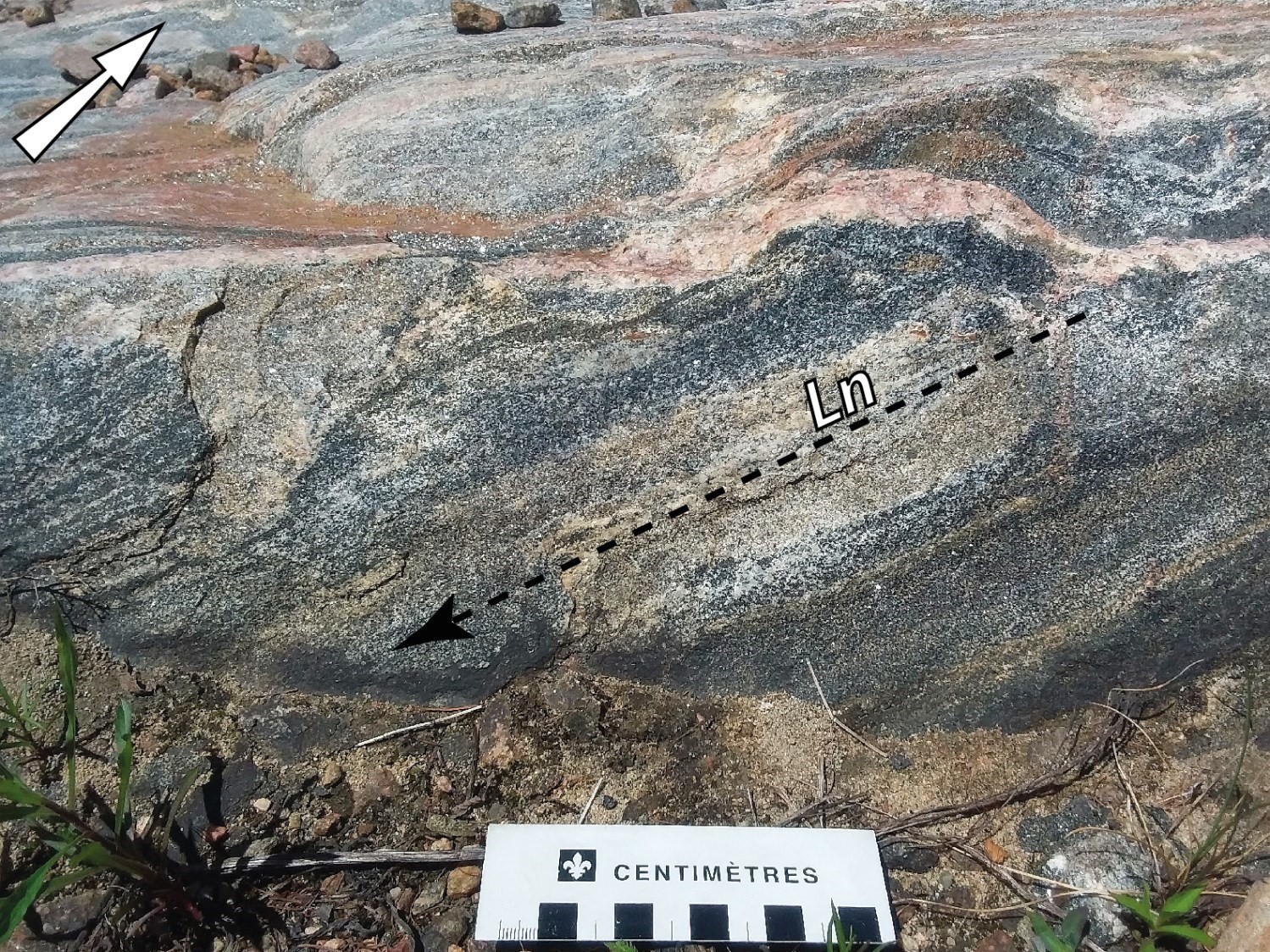 The Sn foliation carries a mineral and stretch lineation Ln having a highly variable attitude. This lineation is highlighted by the preferential alignment of ferromagnesian mineral clusters, especially hornblende, as well as by slight stretching of quartz and feldspar grains. Ln lineation measurements are distributed throughout the Sn foliation mean plane. The plunge of this lineation is therefore highly variable from one outcrop to another. Nevertheless, the stereographic projection of Ln lineation measurements reveals two main groups, one consisting of lineations that plunge ~12° towards the ENE, the other consisting of lineations that plunge ~10° towards the SW. Nevertheless, the wide variability in this lineation’s orientation suggests that this fabric is just as folded as the foliation that carries it. This interpretation is supported by the curved attitude shown locally by the map lineation trajectory. 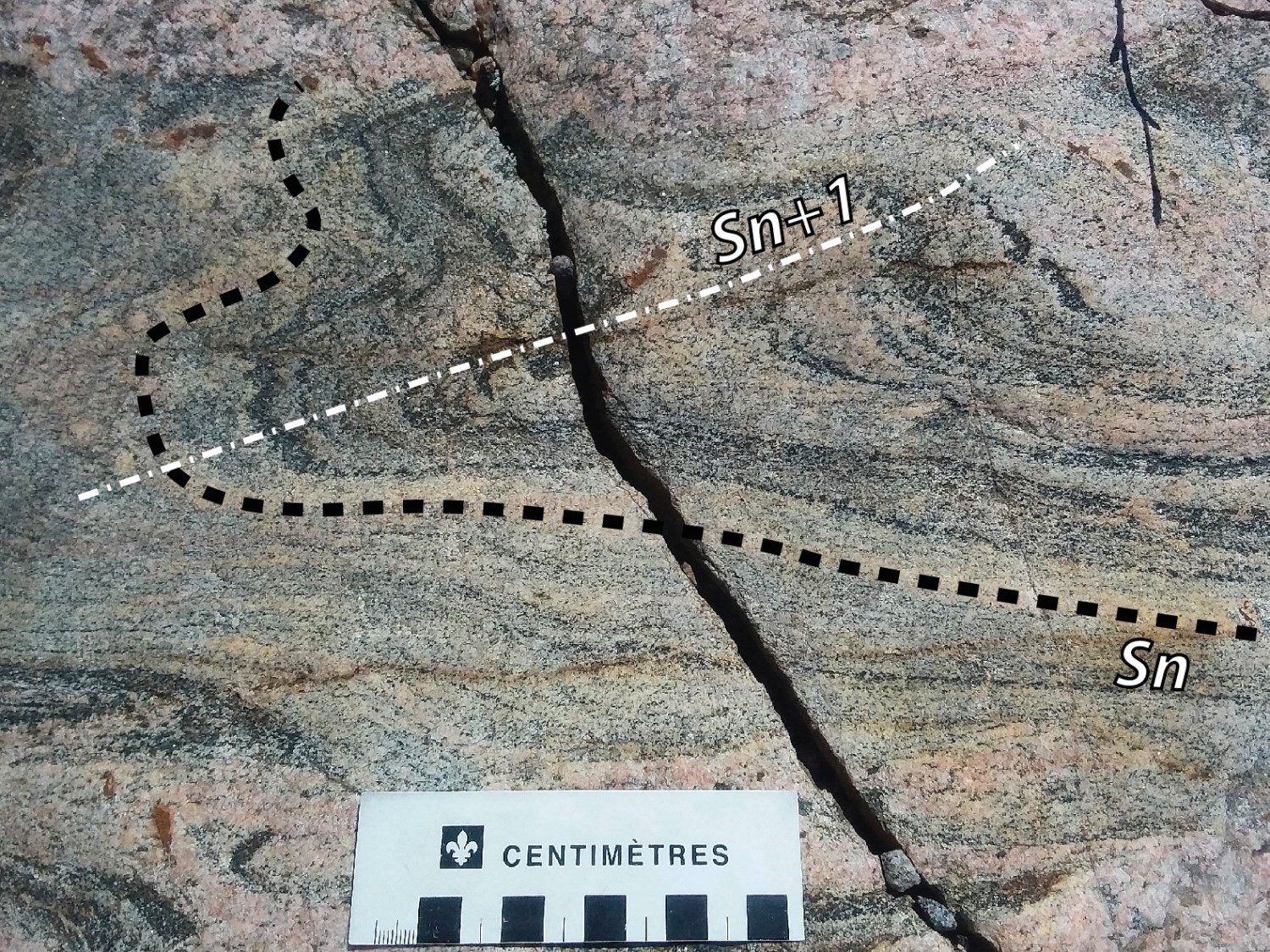 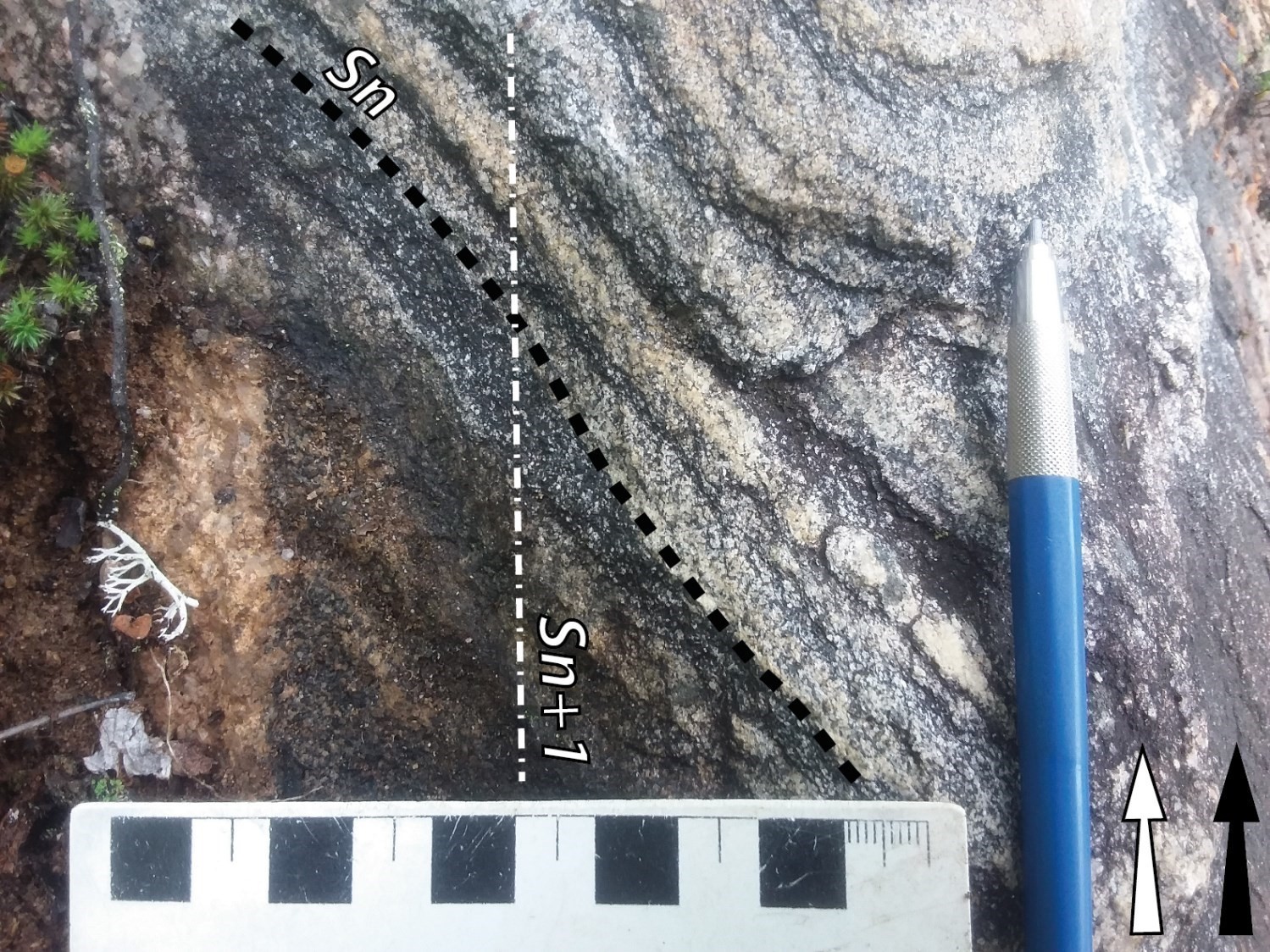 A few outcrops reveal the existence of a second Sn+1 tectonometamorphic foliation. This is a penetrative foliation that is more easily observed when its orientation is highly oblique to the Sn fabric. Macroscopically, the Sn+1 foliation is marked by the preferential orientation of biotite flakes. It can also be highlighted by a schistosity whose planes show spacing of a few millimetres.

In sheets 32A01 and 32A02, only a few Sn+1 foliation planes could be measured; they are generally NE-SW oriented and their moderate dip is mainly SE oriented. In these sheets, mean directions of Sn and Sn+1 fabrics are virtually identical. This suggests that at the scale of the Commissaires Structural Domain, both fabrics are often highly transposed.

North of Perche Lake, the Sn foliation trajectory (interpreted from structural data and magnetic lineaments) highlights the presence of two regional folds with axial plane roughly oriented NE-SW. The Sn foliation attitude around these folds suggests that the northern one is a synform, whereas the southern one is an antiform. These tight folds have a wavelength of about 3 km and amplitude of several tens of kilometres. The Sn+1 foliation and axial-plane traces have quite similar directions, suggesting that Sn+1 forms an axial-plane schistosity. This interpretation implies that the two folds of Perche Lake have developed during the Dn+1 deformation phase.

In sheets 32A01 and 32A02, the Commissaires Structural Domain is cut by a number of faults, most of which have been interpreted from magnetic field maps and derivatives (Intissar and Benahmed, 2015).

The analysis of structural data and high-definition magnetic imaging available in the area (Intissar and Benahmed, 2015; see “Geophysical Characteristics” section) suggests that the Commissaires Structural Domain has been affected by at least one regional folding phase. This phase, to which Pn+1 folds are associated, is interpreted from the main Sn planar fabric trajectory. The traces’ NE-SW orientation indicates a Dn+1 shortening phase roughly oriented NW-SE.

Twenty-five rock samples representative of the Commissaires Structural Domain (sheets 32A01 and 32A02) were observed under the polarizing microscope to specify the conditions of regional metamorphism. Almost all of the selected samples, whether metasedimentary or felsic to mafic intrusive, show mineralogical assemblages that can be attributed to amphibolite facies metamorphic conditions. Metasedimentary rocks of the Wabash Complex have varying biotite-sillimanite-garnet-muscovite assemblages. Felsic to intermediate intrusive rocks of the La Bostonnais Complex and Belley Plutonic Suite show a constant presence of hornblende and biotite and pyroxene is usually absent. Finally, a sample of foliated metabasite has a clinopyroxene-hornblende-biotite mineralogical assemblage characteristic of the upper amphibolite facies.

Although the vast majority of the Commissaires Structural Domain appears to have been affected by metamorphism reaching the upper amphibolite facies, some domain areas may have reached higher grade conditions. In fact, a few samples of foliated intermediate intrusive rock show the presence of orthopyroxene, as well as chessboard quartz grains, a texture which indicates a plastic deformation accommodated by intracrystalline slippage along crystallographic axes a and c at ≥600°C (Blumenfed et al., 1986; Gapais and Barbarin, 1986).

The high-definition total magnetic field map (Intissar and Benahmed, 2015) shows that the pattern of the Commissaires Structural Domain is quite heterogeneous. In the northern part of the domain, north of Perche Lake, the pattern rather shows an isotropic and slightly granulated structure. On the other hand, in the south, the magnetic pattern is clearly marked by rather dense banding. On the vertical gradient map of the magnetic field, bands of alternating ridges of high and low magnetic susceptibility are visible. Domain-wide, bands are commonly straight, but become curved in the SE portion of sheet 32A02.