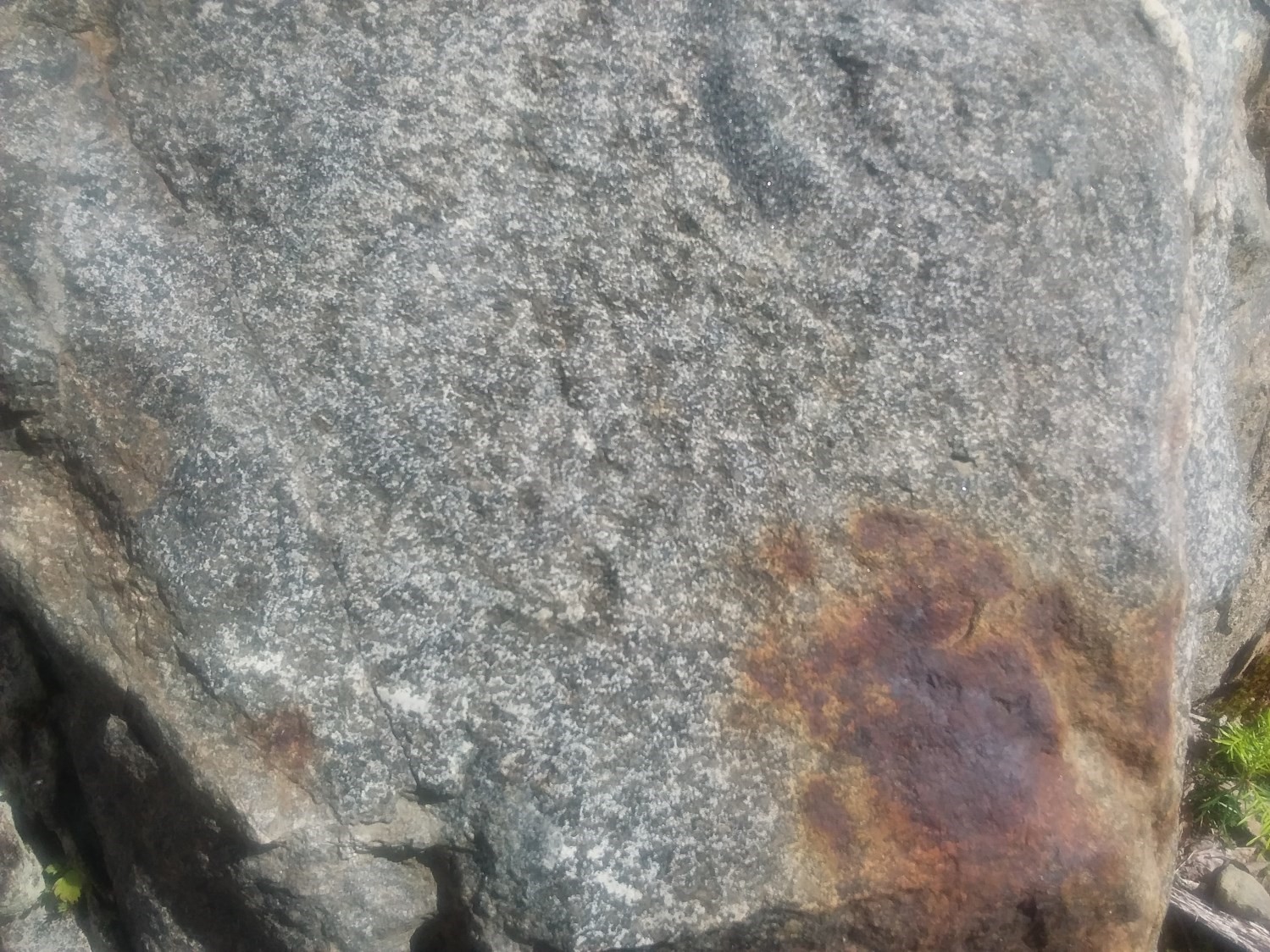 The La Bostonnais Complex was introduced by Rondot (1978) in the Saint-Maurice region. It has four units of equal importance that are easily distinguishable from each other. According to this author, the complex consists of fine-grained sodic migmatites and felsic to mafic igneous rocks. A fifth unit was introduced by Nadeau et al. (1997) and consists of undifferentiated intrusive rocks. Finally, a sixth unit was added by Nadeau et al. (1998) during the Chat Lake mapping to include mixed orthogneiss in the complex. According to Hébert and Nadeau (1995), the La Bostonnais Complex, as defined by Rondot (1978), encompassed lithological units of distinct ages and origins. They therefore recommend the use of the term “La Bostonnais Complex” for all metaplutonic rocks with massive, gneissic or migmatitic textures and whose composition varies from ultramafic to granitic, although dominated by quartz diorite and tonalite.

The geochemical signature of rocks of the La Bostonnais Complex indicates a tectonic environment typical of a subduction context (Gauthier, 1993; Corrigan, 1995; Corrigan and van Breemen, 1997). The association with an island arc or continental environment is not clearly established. Gauthier (1993) proposes a volcanic arc environment. This interpretation is based on Zr/La and La/Ce ratios, as well as discriminant diagram of Harris et al. (1986). On the other hand, Corrigan (1995) concluded that the La Bostonnais Complex was emplaced in an Andean-type continental arc context based on discriminant diagrams of Pearce et al. (1984).

According to the work of Moukhsil and Côté (2018), rocks of the La Bostonnais Complex occupy a large part of NTS sheet 31P16. They have variable composition with SiO2 contents between 49 and 76%. They are metaluminous to peraluminous (Maniar and Piccoli, 1989) and are similar to type I granitoids, but some samples also correspond to type S (sedimentary origin, Chappel and White, 1974). Analytical results plot in the field of volcanic arc granites (Pearce et al., 1984). Mafic rocks plot in tholeiitic and transitional fields (Ross and Bédard, 2009). Based on the available data, the La Bostonnais Complex was subdivided into six units: mPbos1 to mPbos6. 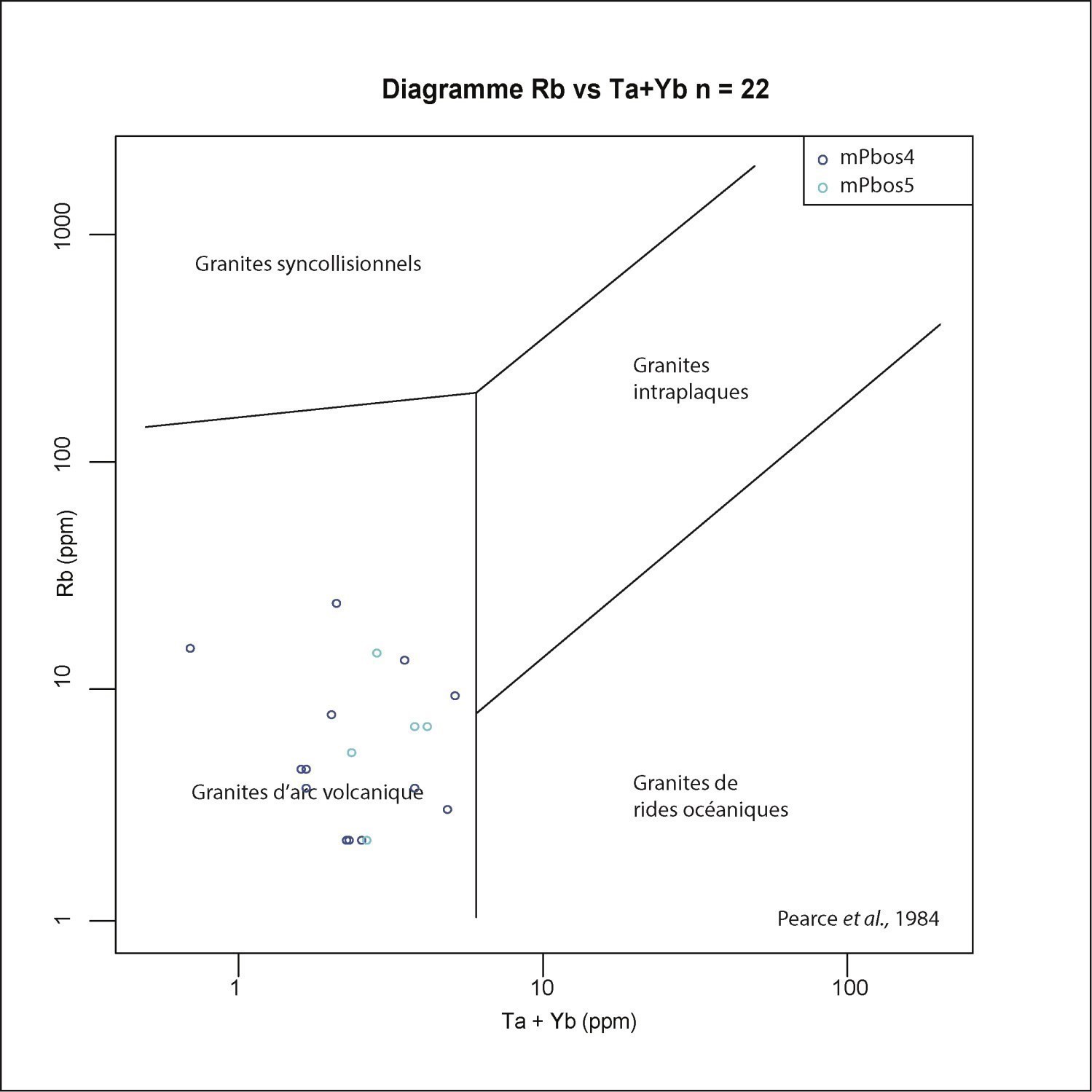 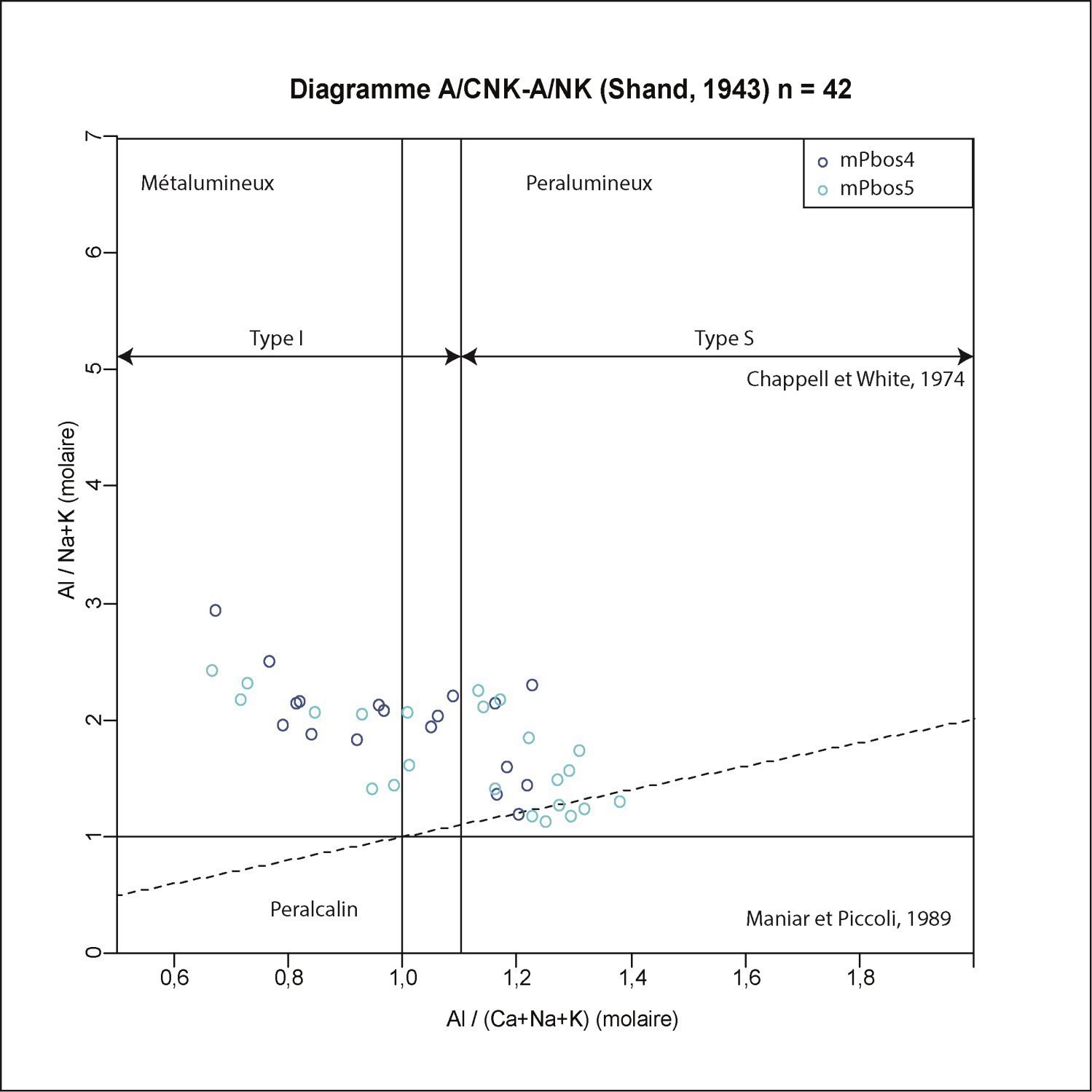 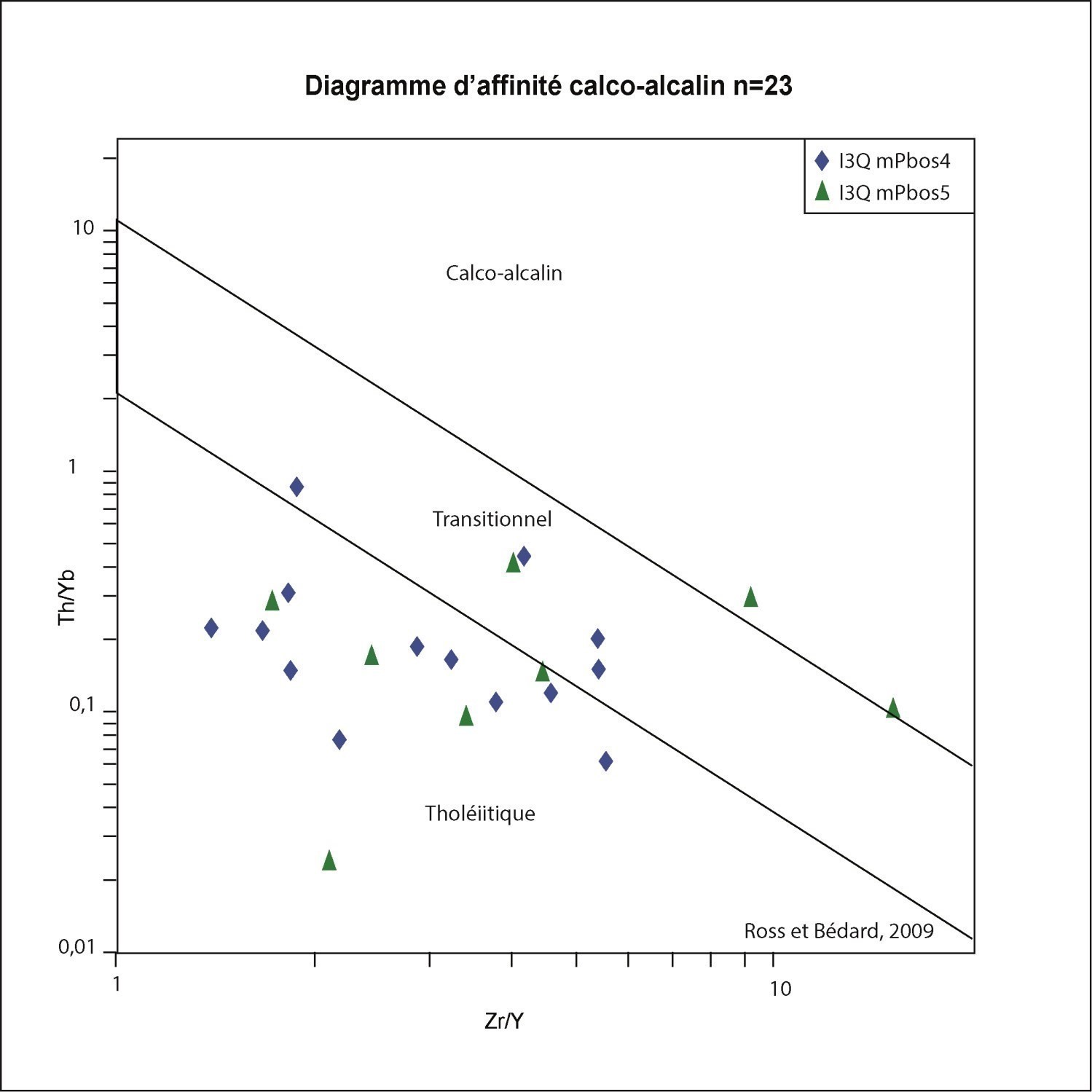 This unit consists of heterogeneous gneiss containing klippes and enclaves of paragneiss and amphibolite. Rocks are usually banded and have highly alternating centimetric to decimetric horizons of paragneiss, impure quartzite, biotite or hornblende ± garnet ± sulphides ± anthophyllite ± cordierite gneiss. Cordierite gneiss are comparable to paragneiss of the Montauban Group.

This unit consists of hornblende-biotite ± garnet (10-20% of the rock) granodioritic and tonalitic gneiss. These gneiss are light bluish grey in patina and fresh exposure, medium to coarse-grained, heterogeneous and migmatitic. Local metamorphic banding is transposed and boudinaged.

This unit consists of medium to coarse-grained granodiorite and tonalite, characterized by light bluish grey patina and fresh surface. These two facies contain 10 to 20% mafic minerals consisting of hornblende and biotite. They are massive, partially gneissic, and have migmatitic texture. 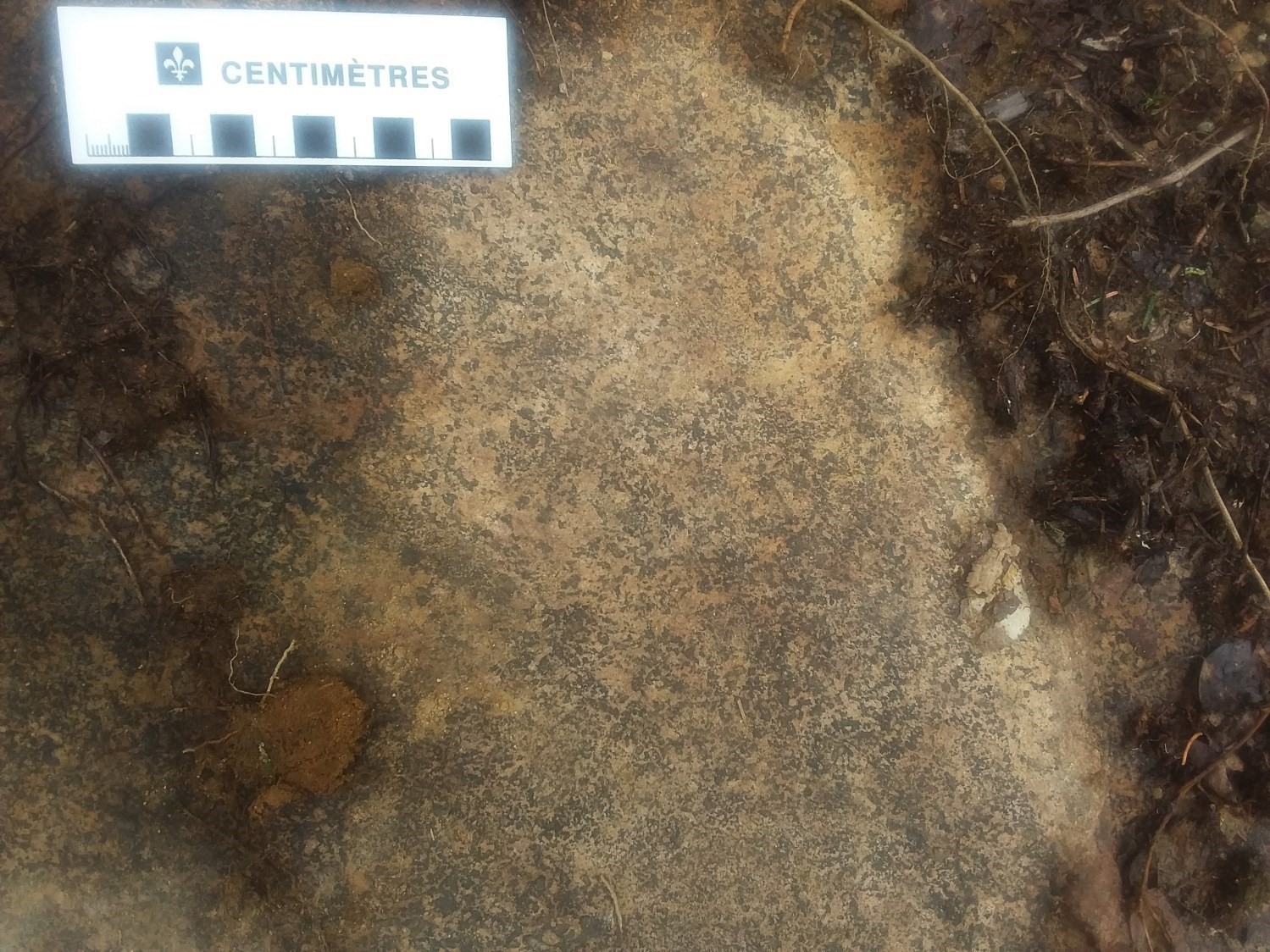 This unit consists of homogeneous medium-grained gabbronorite, gabbro and diorite. Both the patina and fresh surface are dark bluish grey. The three facies contain 30 to 40%mafic minerals consisting of hornblende and biotite with some hypersthene and augite relics, some garnet and some Fe-Ti oxides. These rocks are massive to foliated and homogeneous. Locally, gabbronorite also has a subophitic to ophitic texture with plagioclase laths, and recrystallized orthopyroxene and clinopyroxene. Pyrrhotite crystals surrounded by biotite are also observed in gabbronorite. In the field, xenocrystals of purple plagioclase, millimetric to centimetric, are observed in gabbronorite. It is most likely that they were torn from an anorthositic facies of the area. Minor amounts of quartz diorite, monzonite and K-feldspar-hypersthene syenite locally intrude into this unit. Monzonite is augen to porphyritic due to feldspar phenocrystals. In addition, locally, it contains garnet porphyroblasts associated with magnetite, biotite and green hornblende. 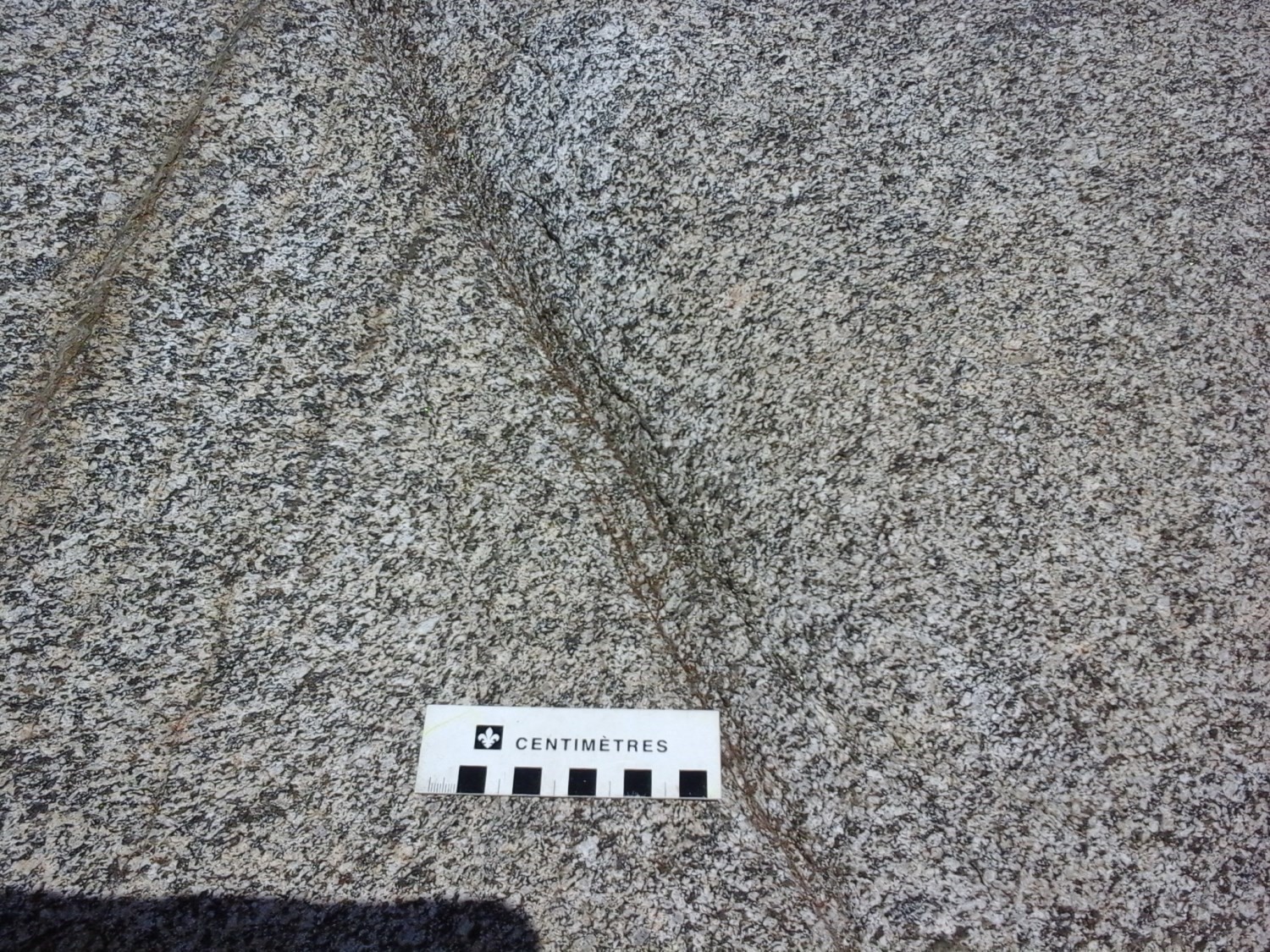 This unit consists of granodiorite, gabbronorite, quartz monzodiorite, as well as minor amounts of diorite with or without hypersthene, gabbro and mangerite. These rocks are fine to medium grained, massive to gneissic, or migmatitic. All facies of this unit can contain up to 40% hornblende, biotite, hypersthene, augite and garnet.

The unit consists mainly of granodiorite, monzodiorite and locally diorite, whose dominant frame is gneissic to migmatitic. In some places, rocks of this unit are massive, medium grained, with a light bluish grey patina and fresh surface. Between 10 and 25% hornblende and biotite are observed in these lithologies. The unit also contains mylonitic augen granite lenses and paragneiss enclaves.

The La Bostonnais Complex contains units of the Montauban Group. It is cut by various intrusions, including mafic to ultramafic intrusions of the Édouard Gabbronorite, the Étoile Suite, the Parc des Laurentides Complex and the Borgia Suite.