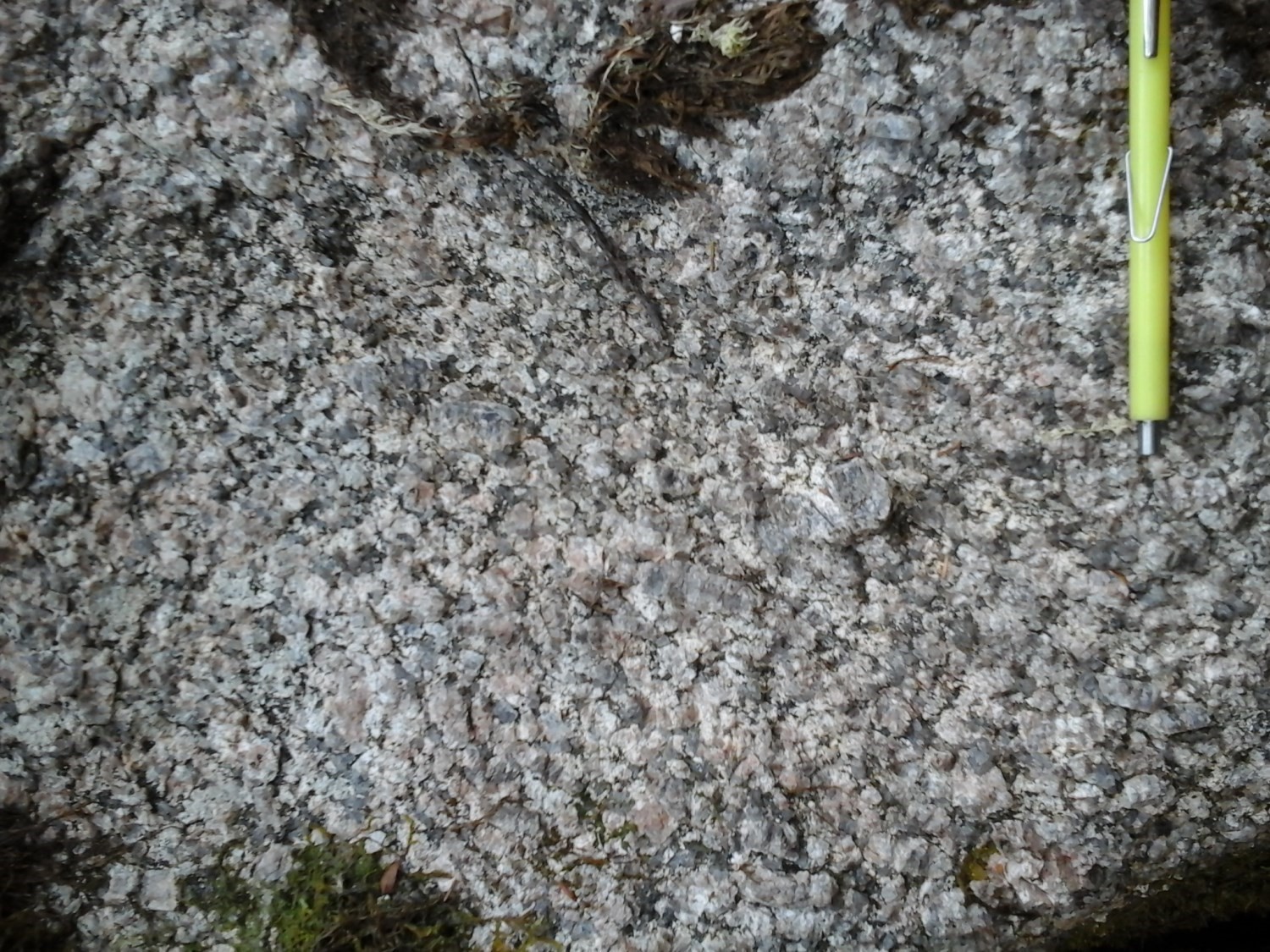 The Leda Intrusive Suite is a unit introduced by Moukhsil and Daoudene (2019) during mapping of the Commissaires Lake area. They defined this suite as consisting mainly of three scattered intrusions in NTS sheets 32A01 and 32A02.

The Leda Intrusive Suite is polyphase and consists of monzogranite, syenogranite, alkaline feldspar granite, quartz ± orthopyroxene syenite, mangerite and minor amounts of hypersthene diorite and quartz monzodiorite. These different facies are scattered throughout the intrusion and cannot be grouped into separate units at the 1:50 000 mapping scale. 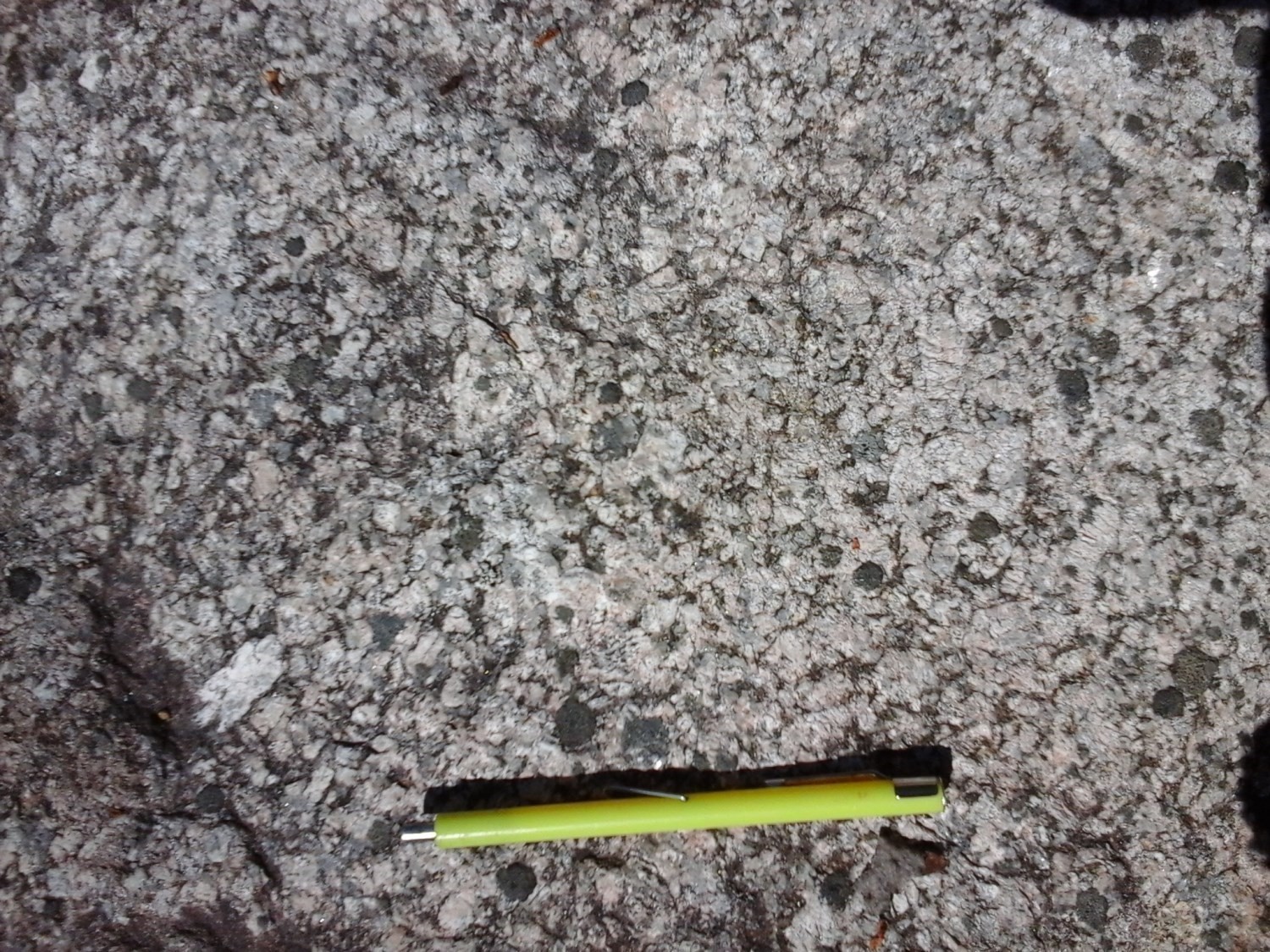 Monzogranite is grey-pink in altered patina and greyish in fresh exposure. It is composed of K-feldspar, plagioclase, biotite and accessory minerals such as apatite, zircon and opaque minerals (pyrite, magnetite). The rock is medium grained and shows a solid-state foliation, locally gneissic. K-feldspar and plagioclase phenocrystals have preferential orientation in places. They can be 4 cm long and typically represent 30% of the rock. 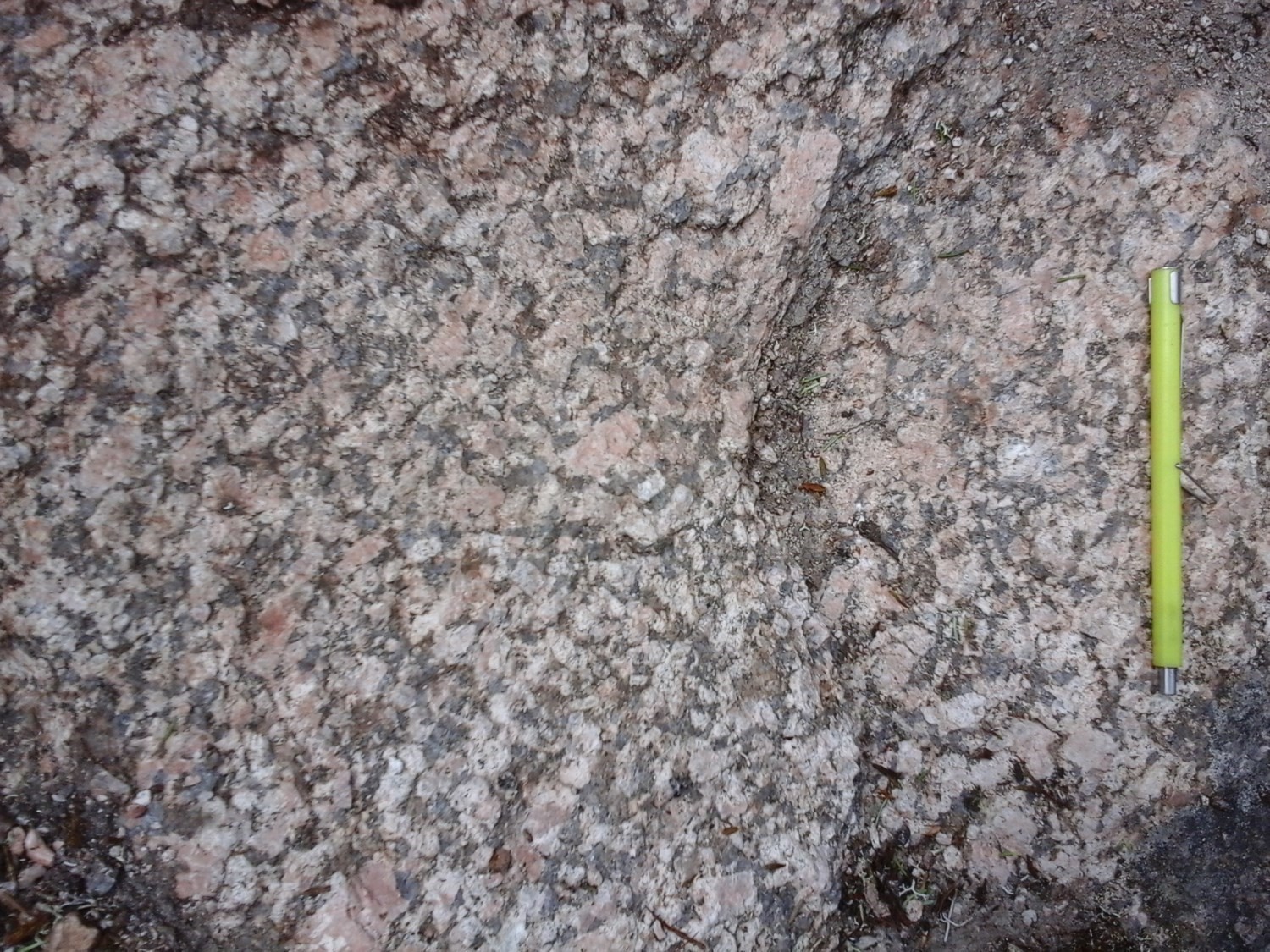 Syenogranite is beige-white in altered surface and pinkish in fresh exposure. It is coarse grained, porphyritic to megacristic with perthitic K-feldspar (3-4 cm long) and plagioclase phenocrystals. Biotite represents 3 to 4% of the rock and is associated with titanite. Apatite and zircon are the accessory mineral phases observed. Syenogranite locally contains millimetric grains of myrmekite. 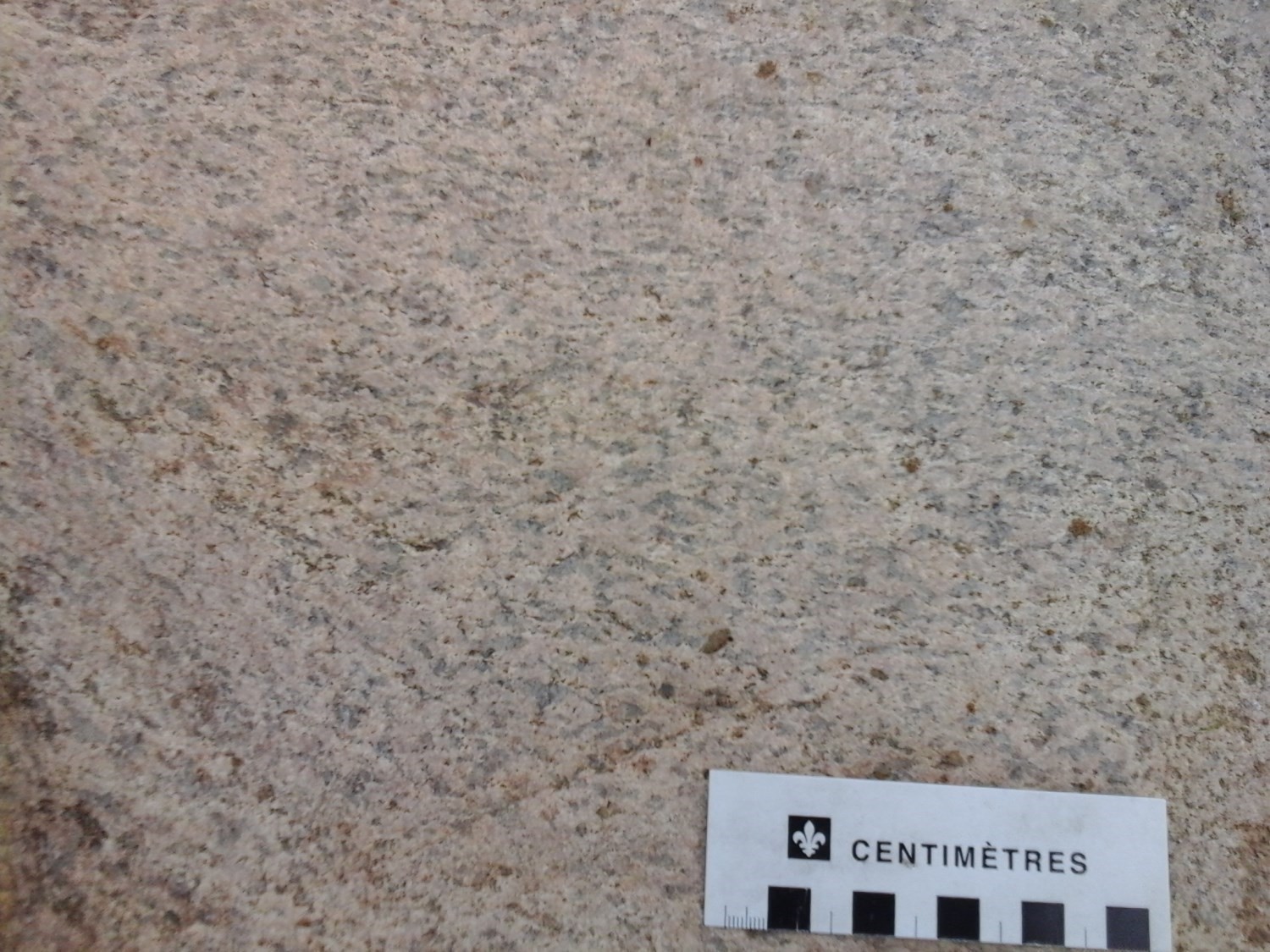 Alkaline feldspar granite is light pink in fresh exposure and pink-brown in altered surface. It is usually medium grained and contains biotite and hornblende. Apatite, zircon, orthopyroxene and opaque minerals (magnetite) are accessory mineral phases. Locally, granite is hematitized and contains enclaves of orthopyroxene-clinopyroxene-biotite-magnetite gabbronorite. Enclaves are fine to medium grained and foliated. 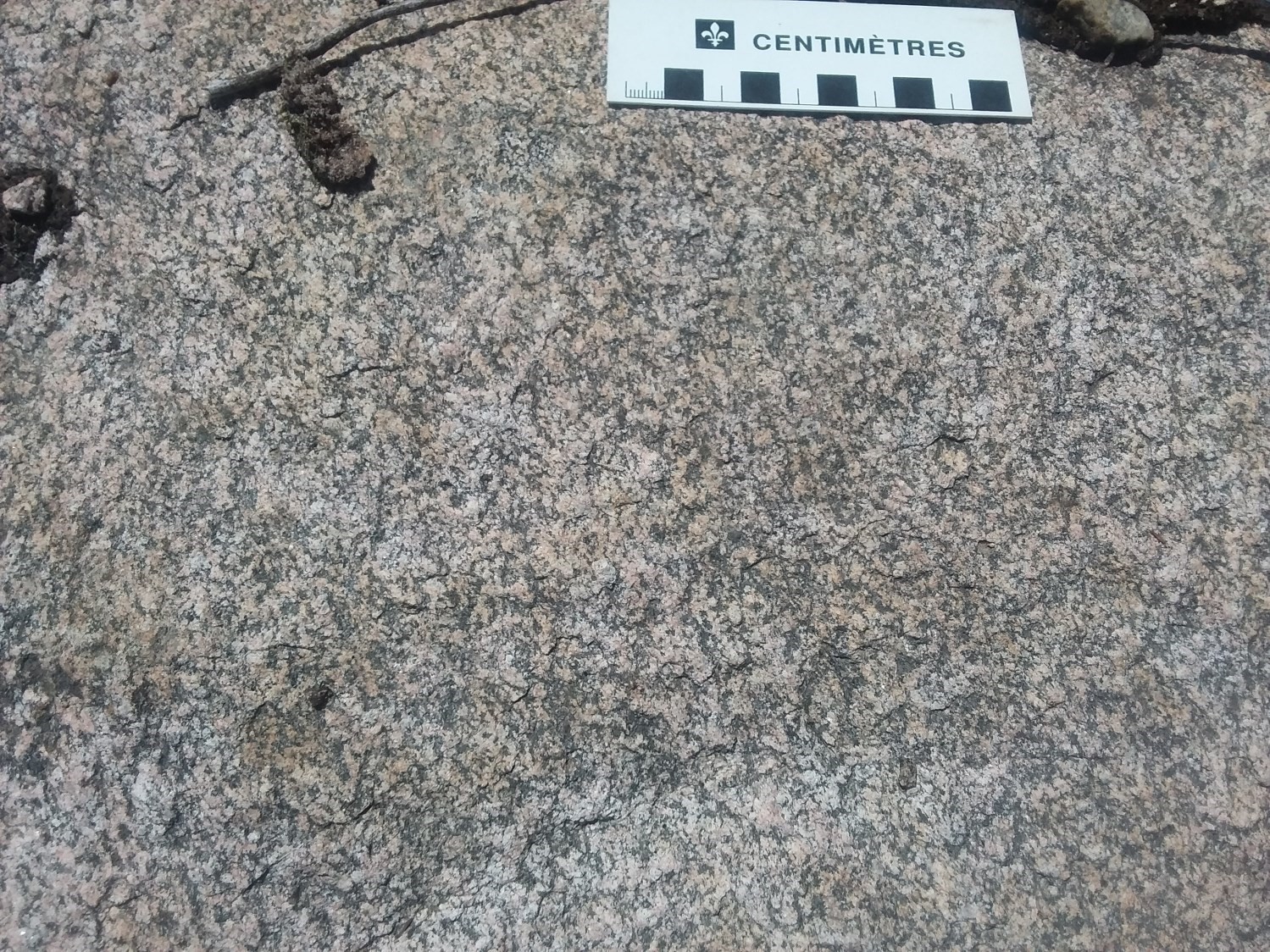 Mangerite is brownish in altered surface and greenish in fresh exposure. It is composed of orthopyroxene, plagioclase, K-feldspar, quartz, green hornblende, biotite with apatite inclusions, zircon and opaque minerals (magnetite and pyrrhotite). Mangerite is porphyritic, locally coarse grained and displays a magmatic texture without preferential mineral orientation. Plagioclase is sericitized and myrmekite grains appear in the rock. 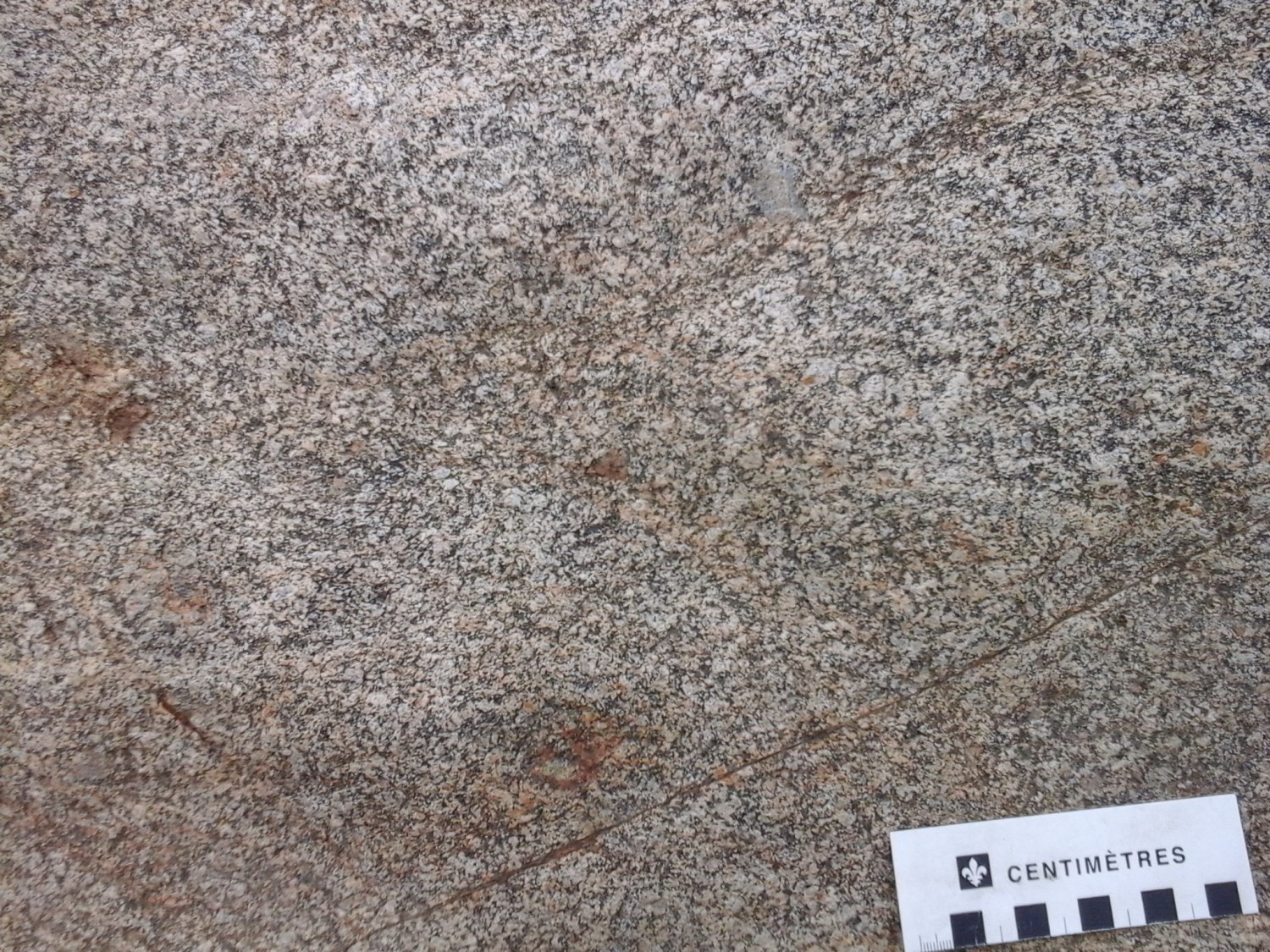 Hypersthene diorite and quartz monzodiorite are two minor facies of this suite. Hypersthene diorite is greyish black in fresh exposure and whitish in altered surface. In the field, minerals observed are orthopyroxene, biotite, sericitized plagioclase and some quartz (<5%). The rock is medium grained and generally foliated and homogeneous. Quartz monzodiorite is pinkish grey in altered surface and grey-black in fresh exposure. It contains clinopyroxene, biotite and hornblende. It is generally massive to weakly foliated, except in localized deformation zones along the edge of the intrusion.

The Leda Intrusion Suite forms three scattered intrusions that are magnetic for the most part (Intissar and Benahmed, 2015). The NE-SW oriented main intrusion has an elliptical shape and an area of ~92 km2, while the second, exhibiting a less magnetic core, has an area of ~42 km2. Typical outcrops are observed SE of Gisèle Lake (e.g., outcrop 18-MV-1116).

Rocks of the Leda Intrusive Suite intrude into the Wabash Complex and the Bardeau Plutonic Suite.