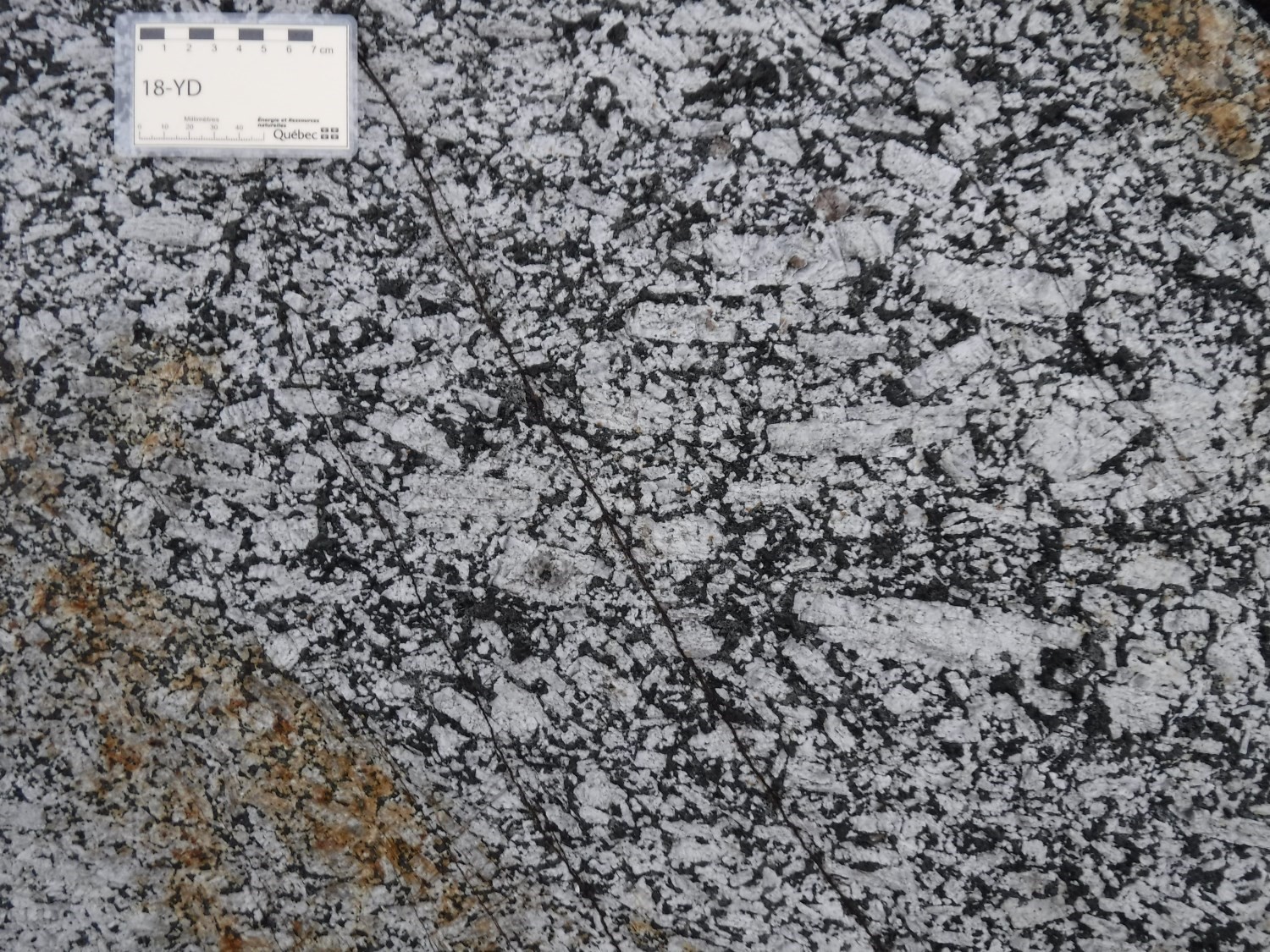 The Rodez Plutonic Suite was defined by Moukhsil and Daoudene (2019) during mapping of the Commissaires Lake area, SW of Lake Saint-Jean.

The Rodez Plutonic Suite consists of a main batholith with some scattered satellite intrusions of syenitic, anorthositic, leuconoritic and mangeritic rocks. The Rodez Plutonic Suite hosts mineralization associated with a mafic to ultramafic host rock enriched in Fe-Ti oxides, with traces of vanadium and phosphorus. It is subdivided into two units, mPrdz1 and mPrdz2, both of which can be mapped at the 1:50 000 scale. These units are easily distinguishable on aeromagnetic maps (Intissar and Benahmed, 2015). 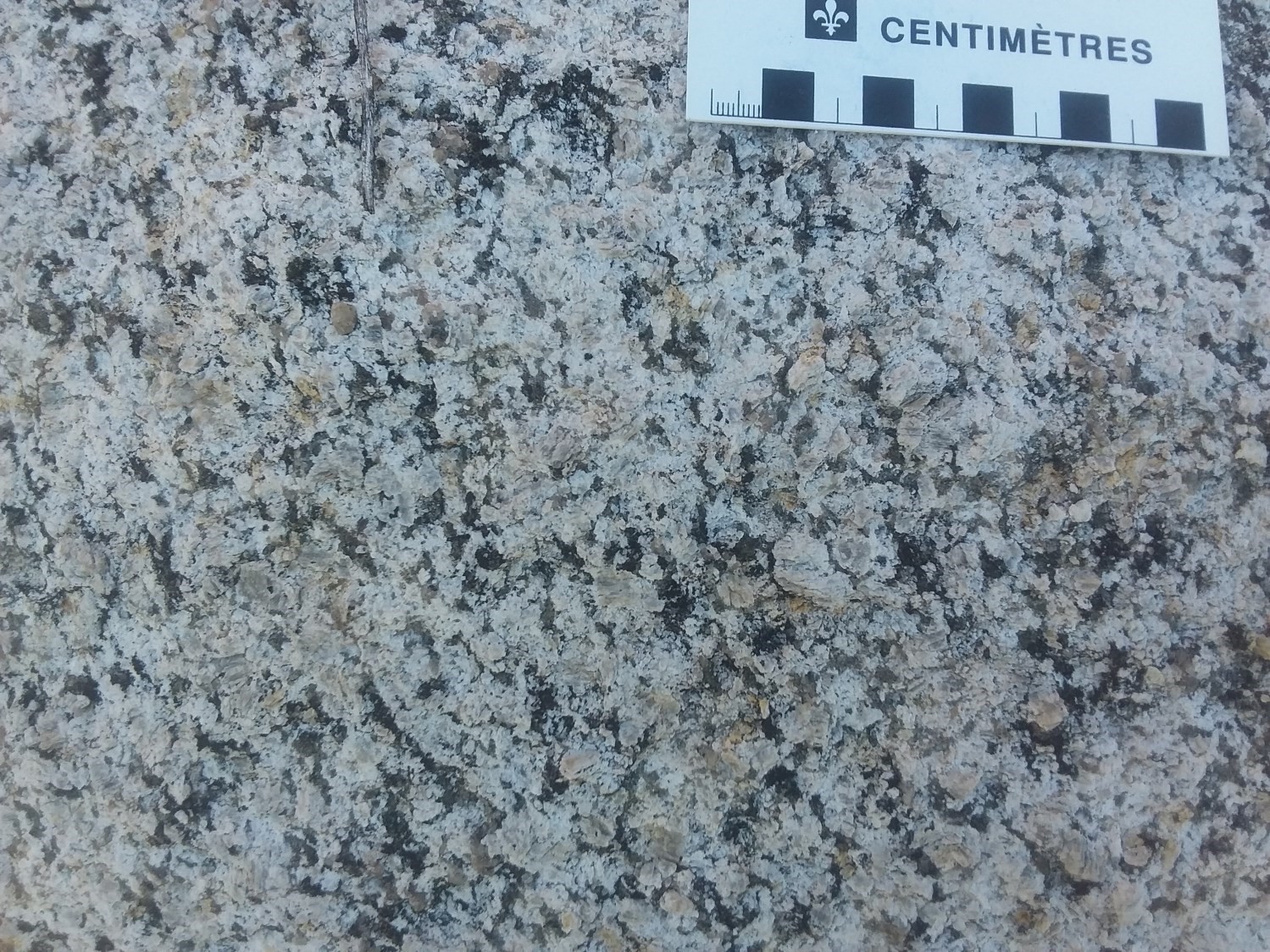 Quartz syenite is magnetic, brown-white in altered patina and usually greenish in fresh exposure. It is generally K-feldspar-plagioclase porphyritic, even locally megacristic. Phenocrystals range in size from 1 to 5 cm, locally 7 cm long, and can account for 35% of the rock. K-feldspar is perthitic while plagioclase is less altered and has a few fractures locally filled with white mica. Quartz is in large zones with no evidence of deformation. Myrmekite can be observed locally. Quartz syenite contains no more than 3% ferromagnesian minerals such as orthopyroxene, clinopyroxene and scarce biotite. Ferromagnesian minerals form clusters and accessory minerals such as apatite and zircon are frequently associated with them. In the field, quartz content ranges from 15 to 35%.

Syenite evolves laterally to a pinkish alkaline feldspar granite. It is coarse grained to perthitic-K-feldspar porphyritic, with less than 2% ferromagnesian minerals (biotite, hornblende, trace orthopyroxene). In alkaline feldspar granite, quartz forms large zones with no preferential orientation and with weak undulatory extinction. Syenogranite has the same texture and mineralogy as alkaline feldspar alkaline, except that it contains more plagioclase. 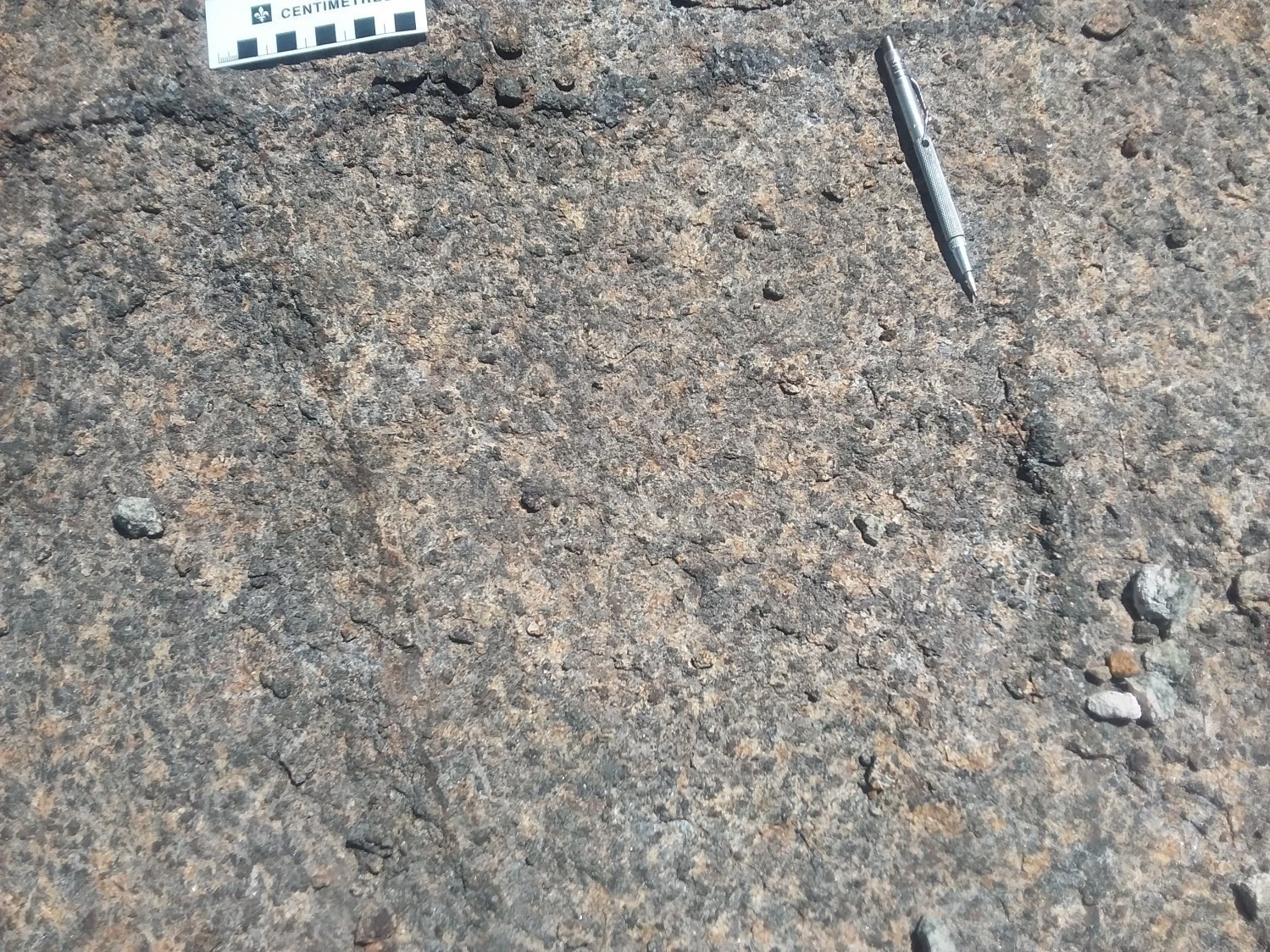 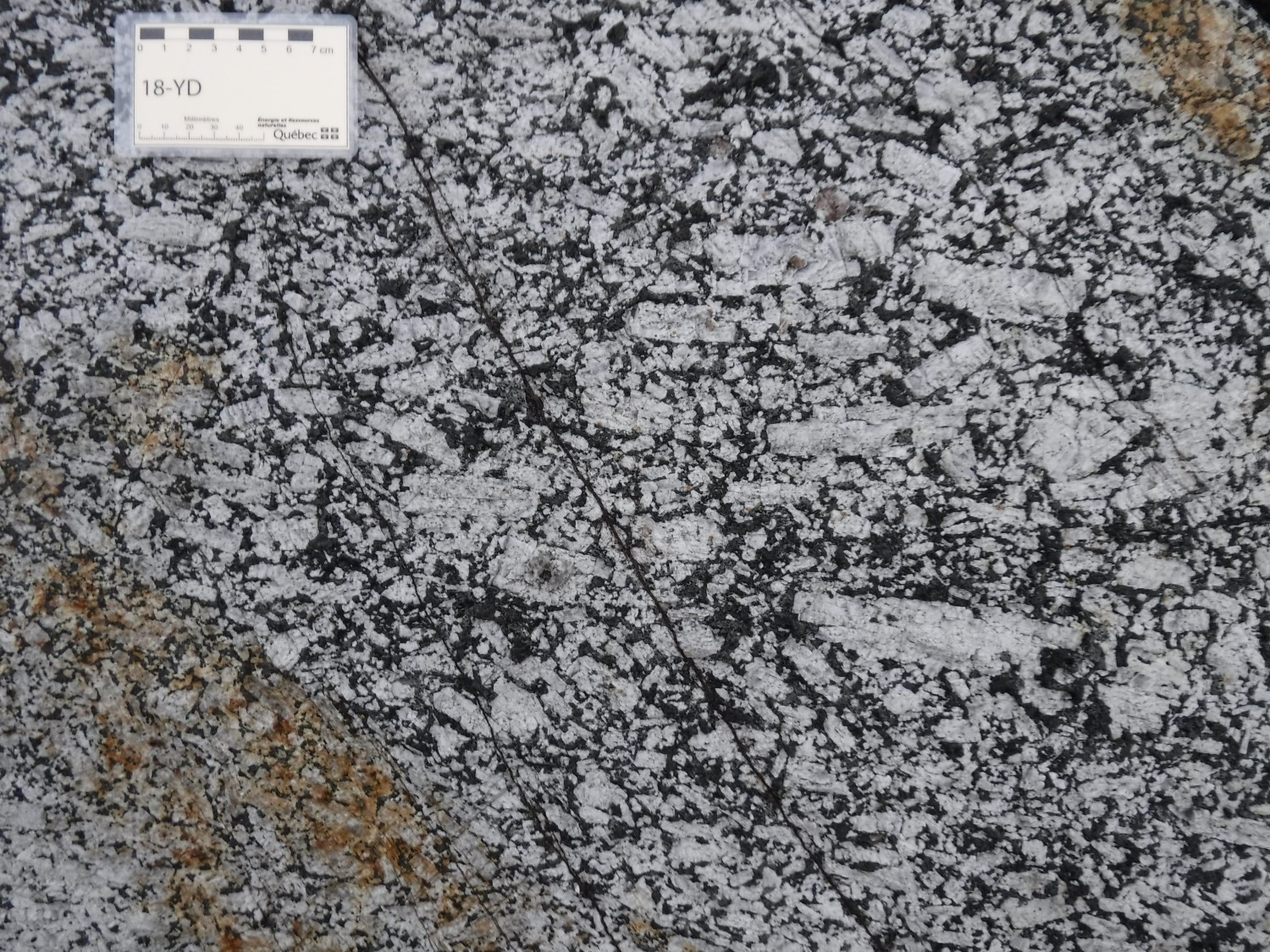 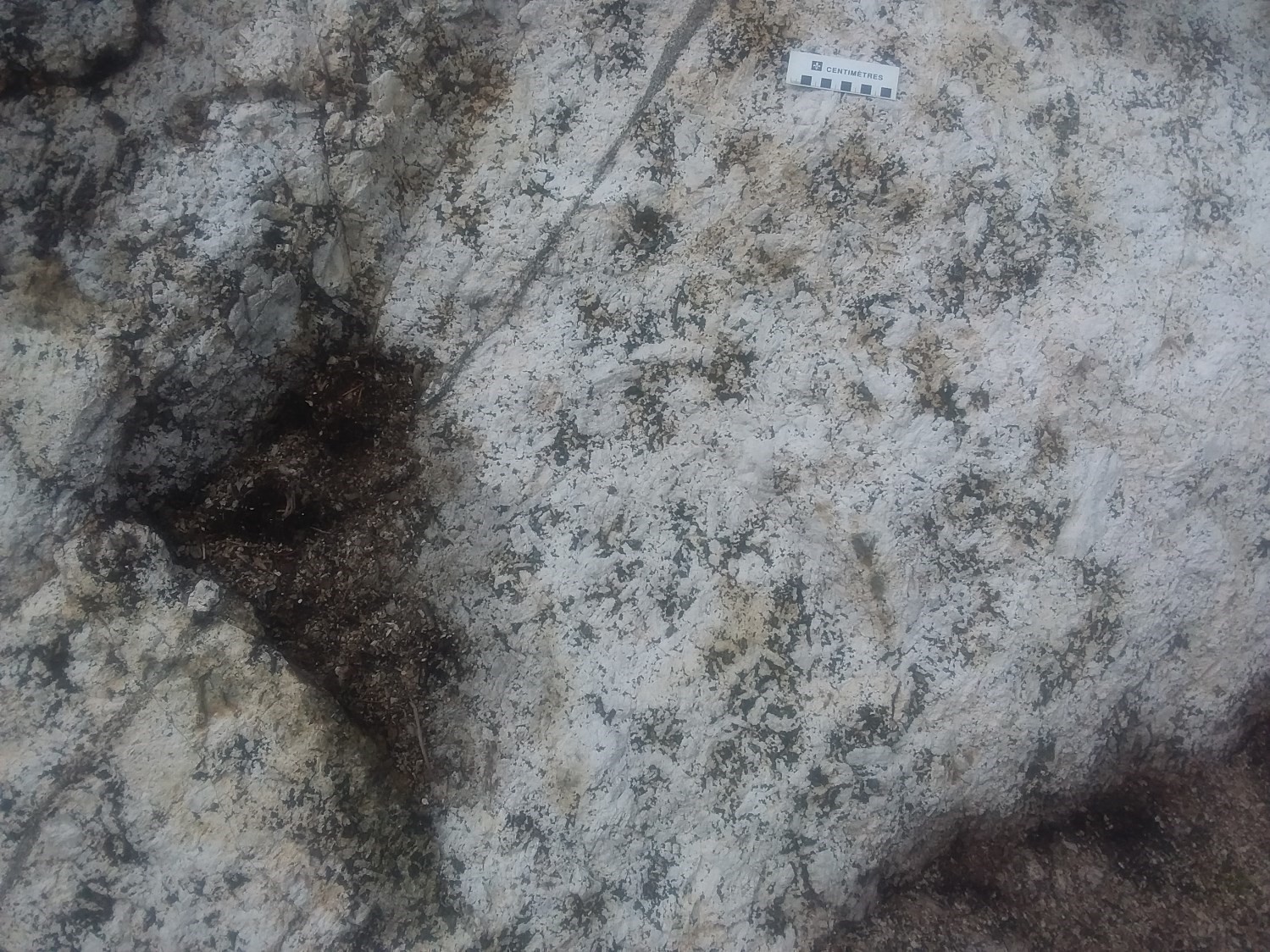 Anorthosite is whitish to blackish and porphyritic to megacristic. Tabular plagioclase phenocrystals ranges in length from 2 to 8 cm. Anorthosite contains 1 to 10% ferromagnesian minerals, mainly orthopyroxene and clinopyroxene, and scarce biotite. In thin section, alteration of plagioclase is visible by the presence of a fine border parallel to polysynthetic twins and composed of an assemblage of white mica and carbonate. From one outcrop to the other, anorthosite contains varying and generally small amounts of centimetric garnet porphyroblasts with opaque mineral inclusions. It is generally massive, locally foliated near deformation zones. Locally, plagioclase is recrystallized and form small whitish grains associated with ferromagnesian mineral clusters, giving the rock a “leopard” appearance. In anorthosite, hypersthene is locally coronitic with a millimetric rim of green hornblende and some epidote.

Leuconorite is grey-black, plagioclase porphyritic and contains up to 25% ferromagnesian minerals (orthopyroxene and some clinopyroxene). Mangerite is brownish to whitish in altered patina and greenish in fresh exposure. It is K-feldspar-plagioclase porphyritic with phenocrystals that can form up to 25% of the rock and be 4 cm long. It is composed of quartz, orthopyroxene, amphibole, biotite, magnetite, apatite and zircon. K-feldspar is locally perthitic and may contain plagioclase inclusions. Quartz occurs in large zones with undulatory extinction and in places form vermicular intergrowths with plagioclase (myrmekites). Orthopyroxene is characterized by small circular crystals associated with biotite and amphibole. 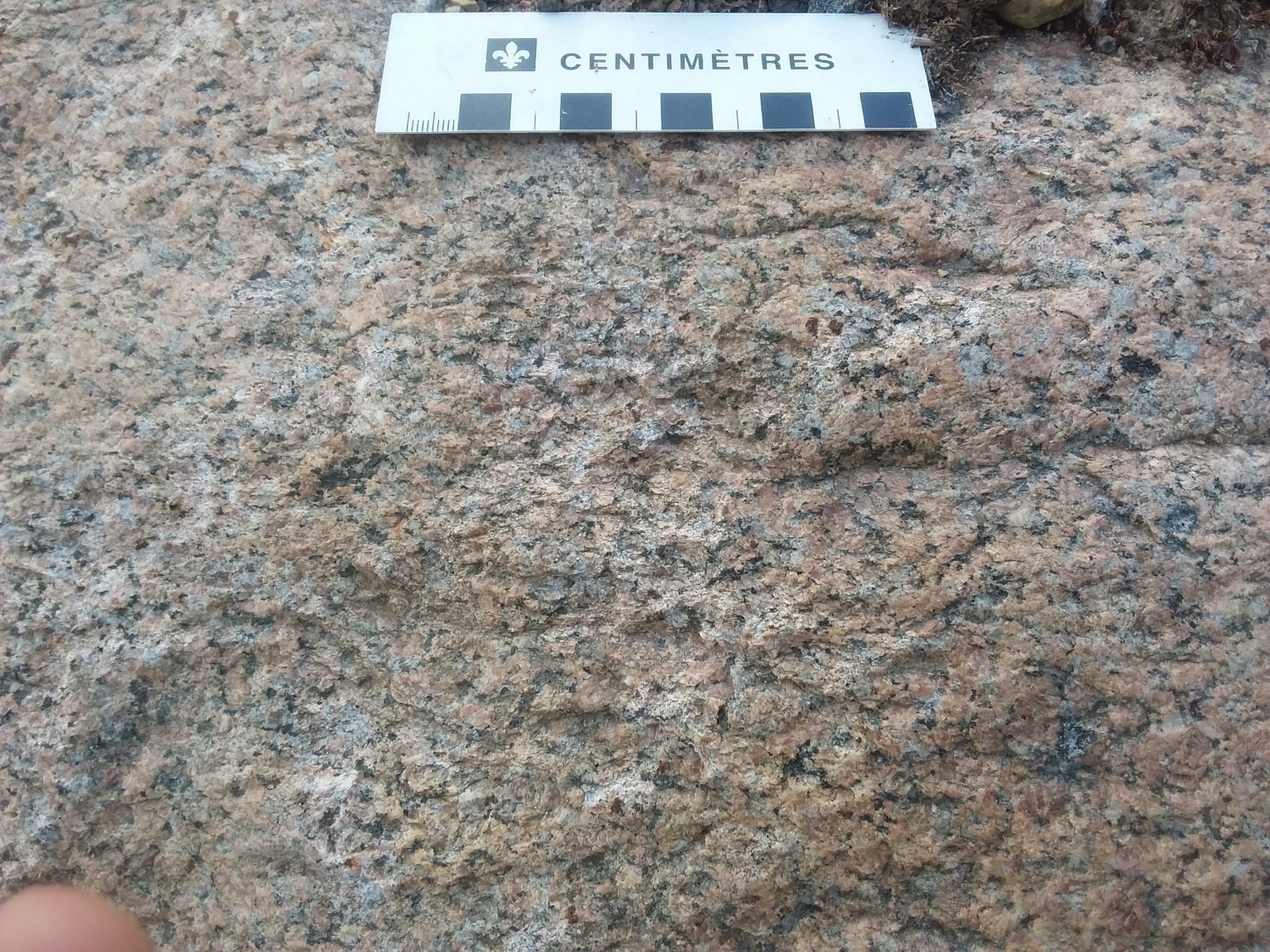 Charnockite is brownish in altered surface and greyish to pinkish in fresh exposure. It is coarse grained, heterogranular, homogeneous and foliated. In thin section, it shows perthitic K-feldspar, plagioclase and quartz in large zones with undulatory extinction. Ferromagnesian minerals form clusters composed mainly of biotite, green hornblende and, in lesser amount, completely uralitized orthopyroxene. Accessory mineral phases consist of apatite inclusions in biotite and zircon. Charnockite is intruded by syenite and syenogranite dykes. 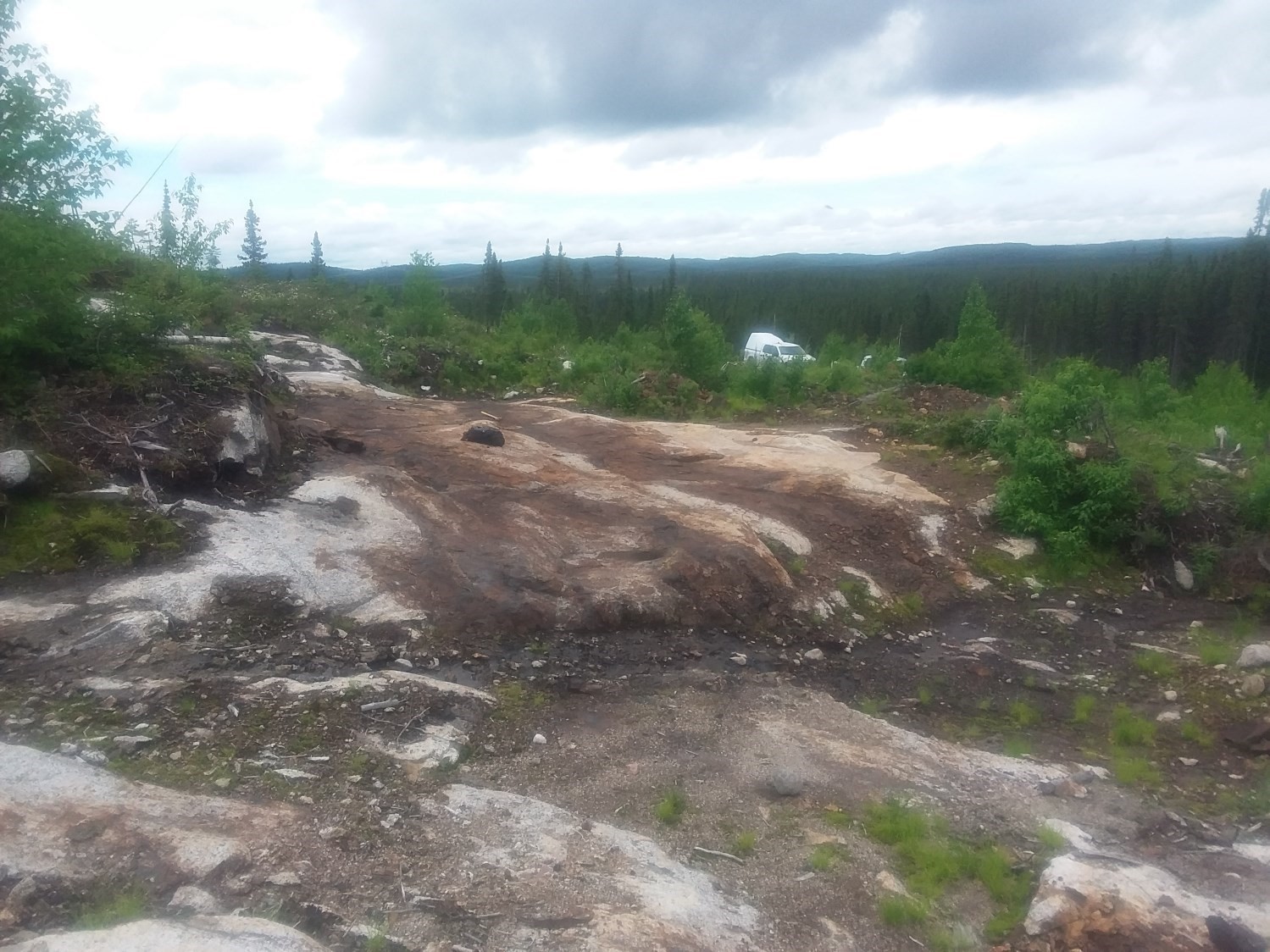 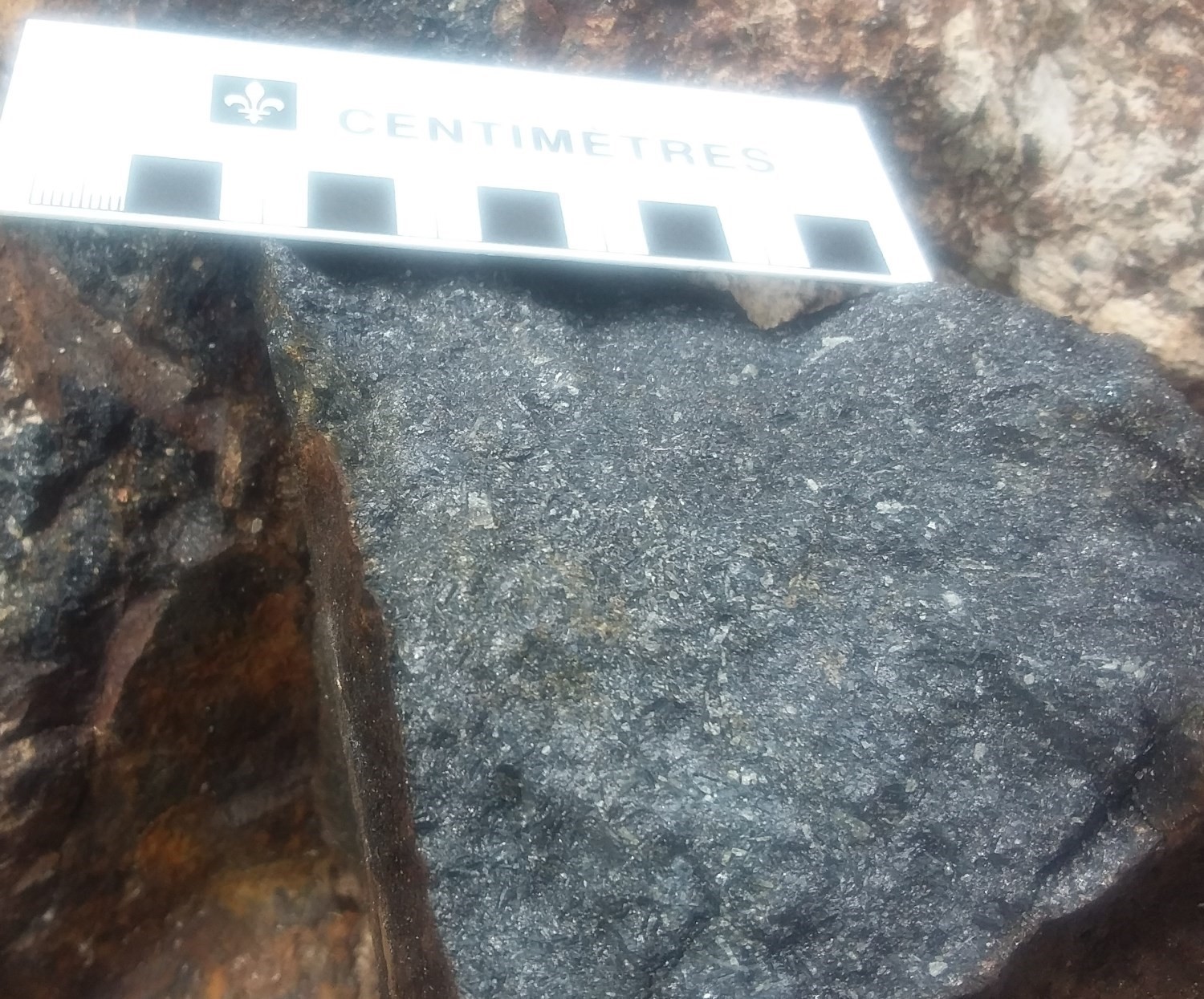 Gabbronorite is associated with Fe-Ti-P±V oxide mafic to ultramafic rocks and transition between these rocks is difficult to observe. In outcrop, oxide rocks show a 65-95% variation in oxidized minerals and have high magnetic susceptibility. The rock that contains less than 90% oxides consists of Fe-Ti-P oxide gabbronorite (OAGN = Oxide-apatite Gabbronorite, acronym proposed by Owens and Dymek, 1992). In addition to oxides, gabbronorite contains apatite. In contrast, when the proportion of oxides is greater than 90%, it consists of mafic to ultramafic rocks with less than 5% of plagioclase and orthopyroxene. In these lithologies, apatite content (~5 mm rods) ranges from 6 to 13% and can reach 15%. These rocks host a Fe-Ti-P±V mineralization zone, which consists of magnetite (vanadiferous), hemo-ilmenite and apatite (Project EP showing). Gabbronorite with less than 5% Fe-Ti oxides is subophitic with 3% millimetre-grain magnetite, 2% hemo-ilmenite, large orthopyroxene crystals intergrown with clinopyroxene and long plagioclase rods.

Jotunite (hypersthene monzodiorite) is coarse grained to porphyritic and massive. It is composed of orthopyroxene, clinopyroxene, epidote and trace garnet. In thin section, orthopyroxene contains lamellar clinopyroxene intergrowths giving the grains a skeletal texture. Deformation of plagioclase grains is highlighted by undulatory extinction of polysynthetic twins, which often pinch out. Accessory minerals are epidote, apatite, pyrite, pyrrhotite and magnetite. 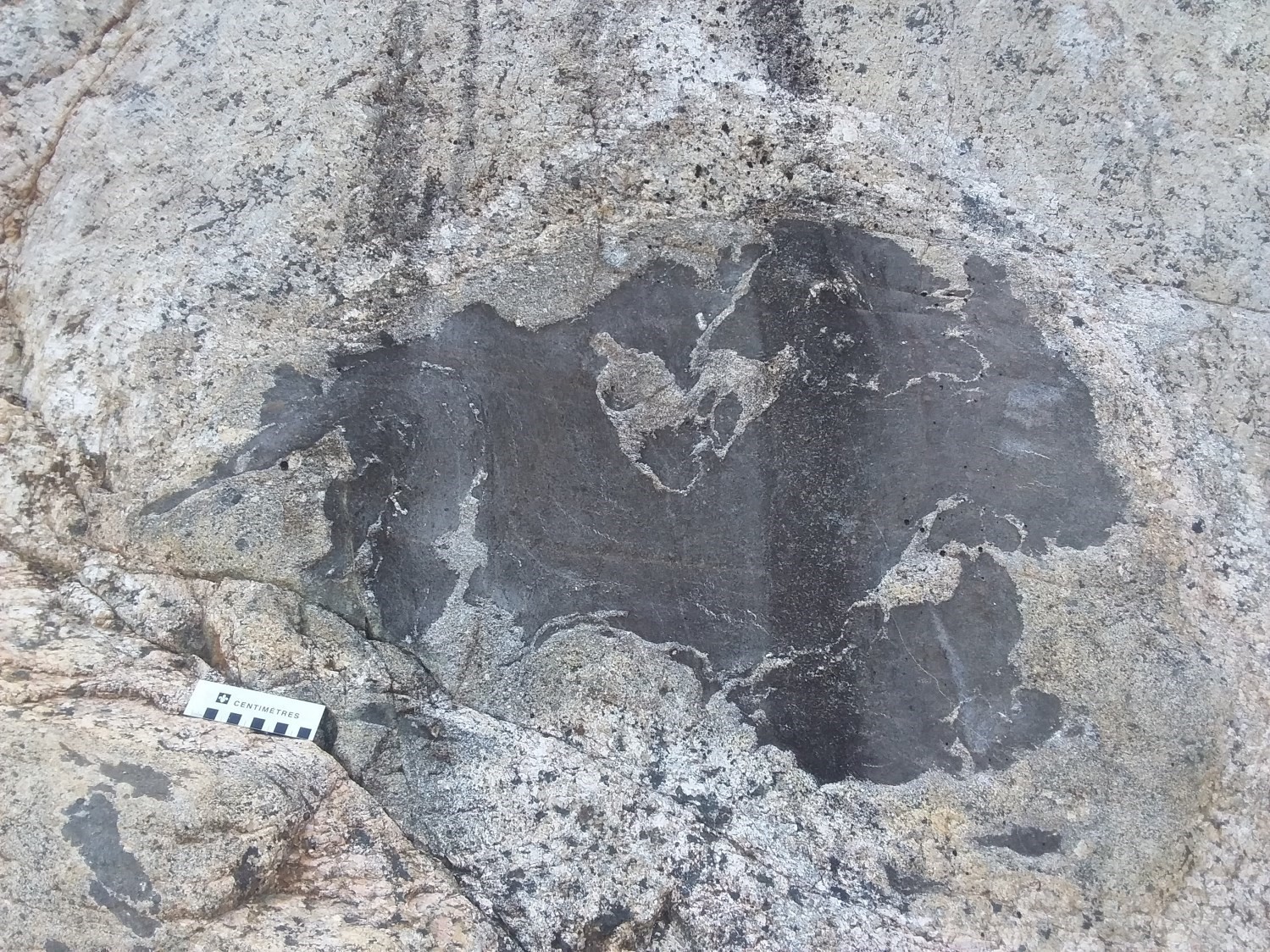 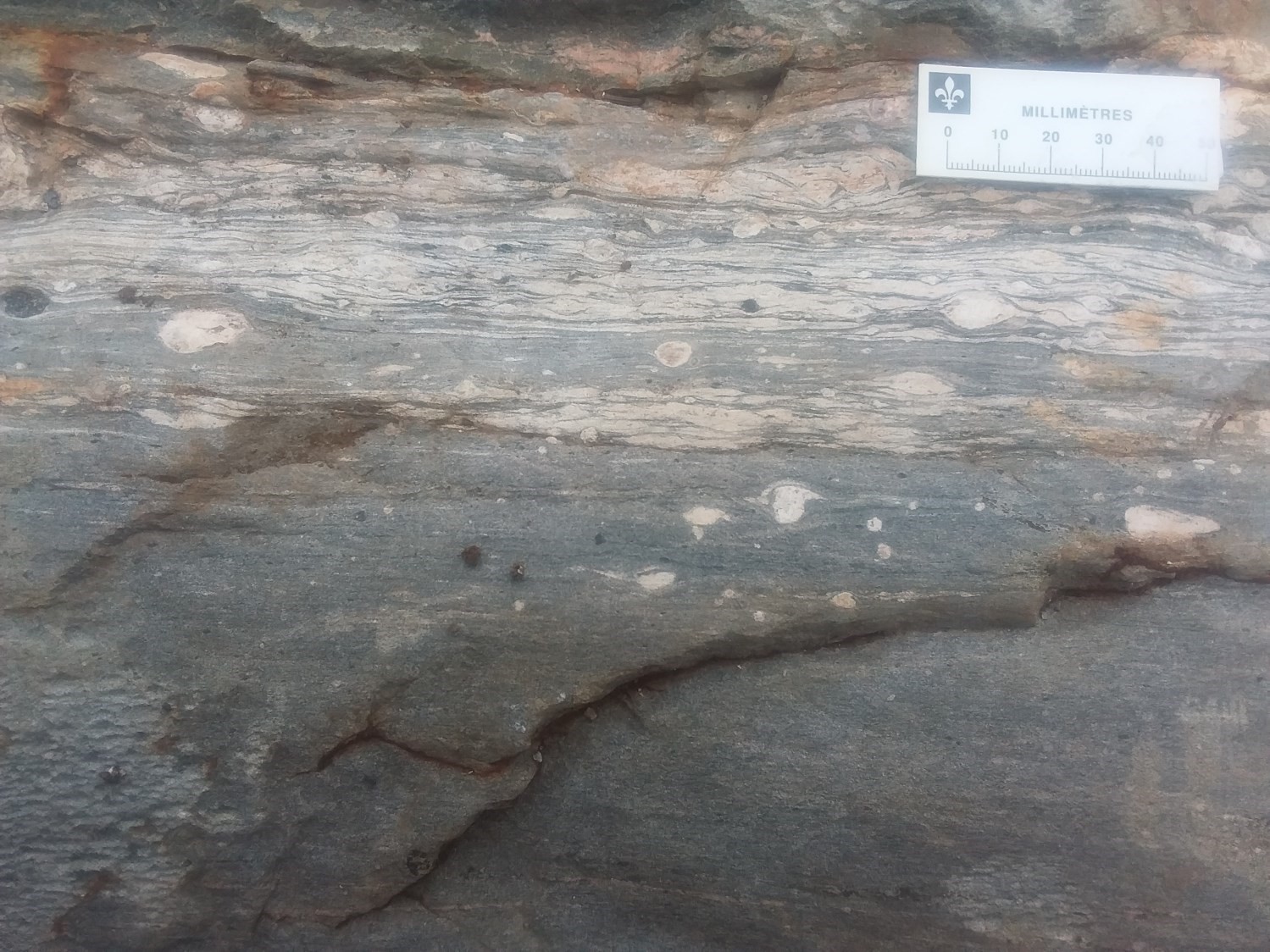 Quartz diorite is a minor facies in this unit. It is very fine grained, very deformed and sheared. This rock also occurs as millimetric to metric enclaves in recrystallized-plagioclase anorthosite. Quartz diorite contains clinopyroxene, orthopyroxene, plagioclase, biotite, some apatite and opaque minerals, including magnetite.

The isotopic dating of the sample 2018-AM-0024A yielded a Mesoproterozoic age.

The Rodez Plutonic Suite intrudes into the Wabash and Barrois complexes, in addition to being in contact with the Jobber Mangerite.