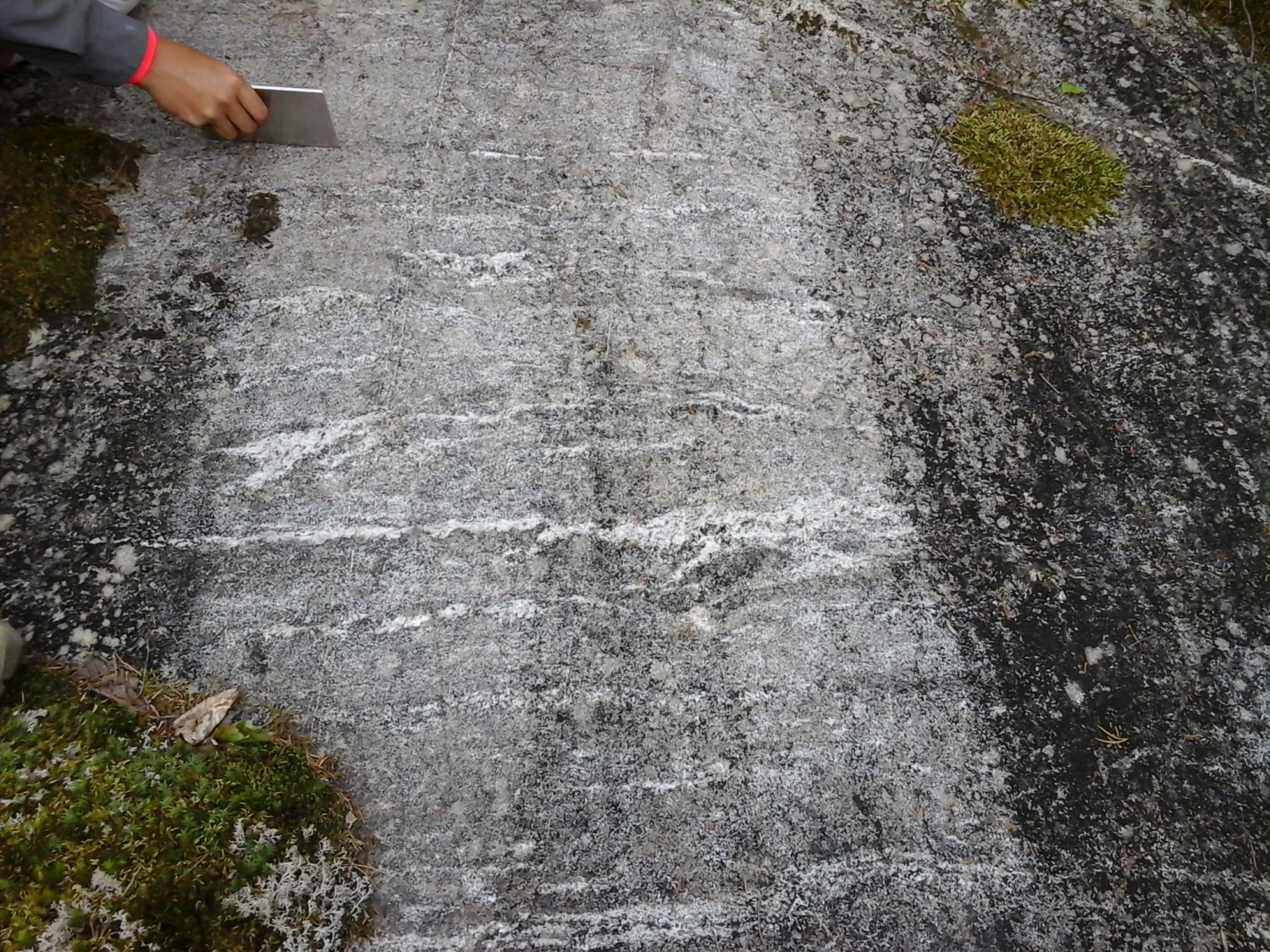 The Wabash Complex was defined by Moukhsil et al. (2015) when mapping the Parent region. This complex consists of a package of metasedimentary and metavolcanic rocks. 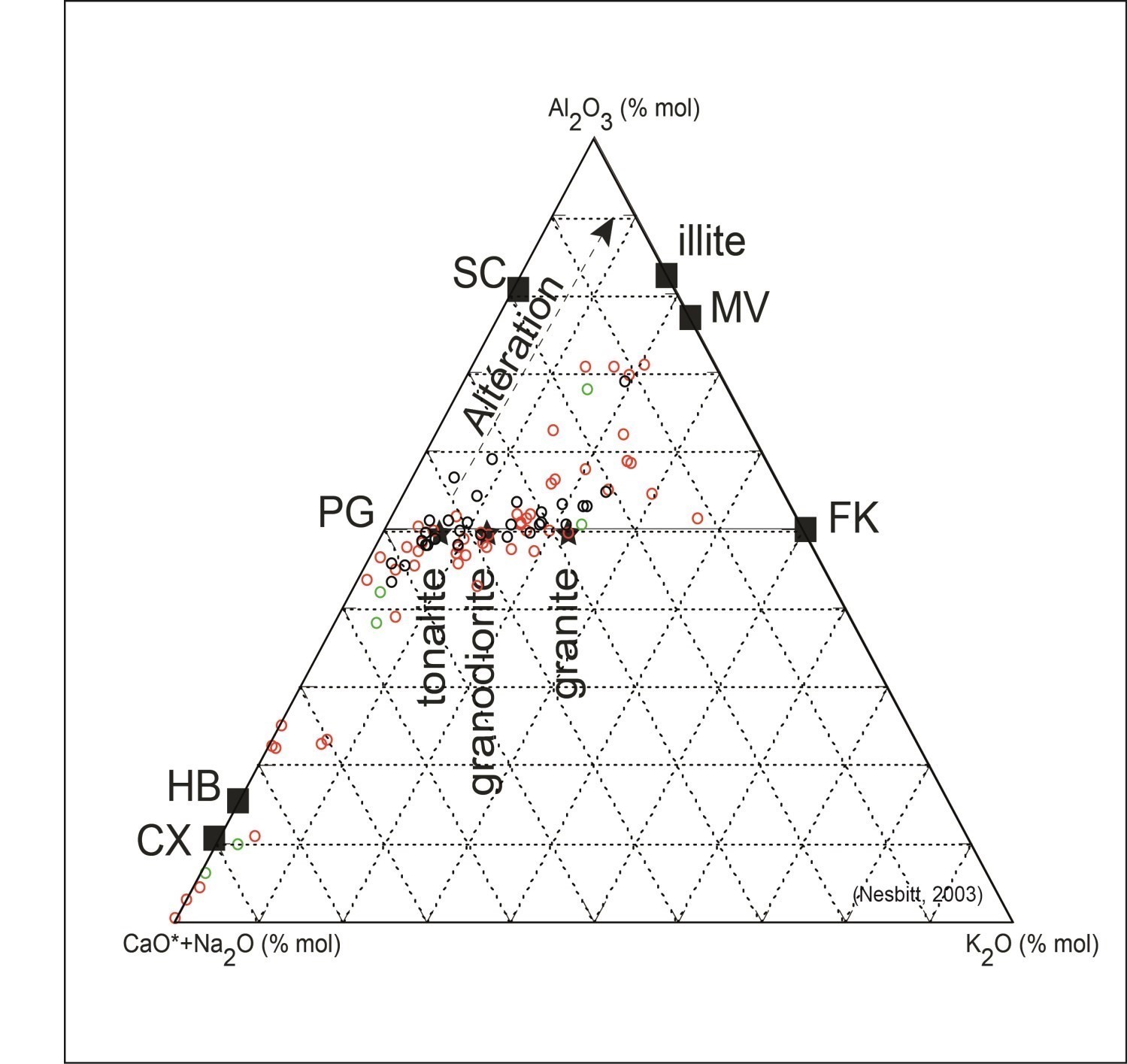 The geochemical diagram of Nesbitt (2003) suggests that the paragneiss source at the Wabash Complex would be granitic to tonalitic in composition. In the same diagram, some paragneiss samples plot close to the pole of muscovite and illite, which could reflect an early alteration event, whereas quartzites plot between the field of granites and tonalites, showing that these quartzites are impure. Calcosilicate rocks plot near the pole of clinopyroxene and hornblende. Rocks of the Wabash Complex vary in composition with SiO2 contents ranging from 40% (mafic rocks of unit mPwab4) to 92%. 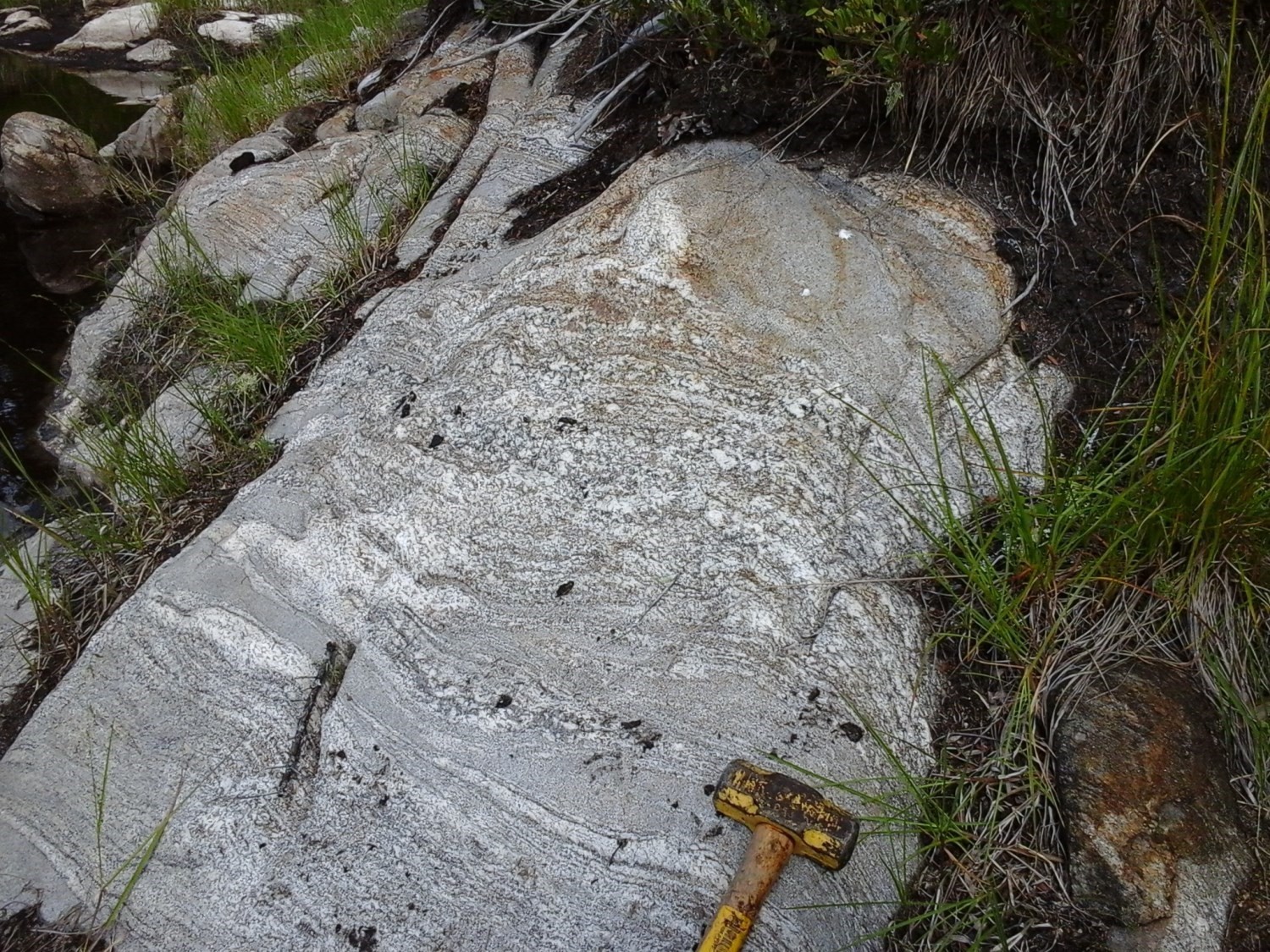 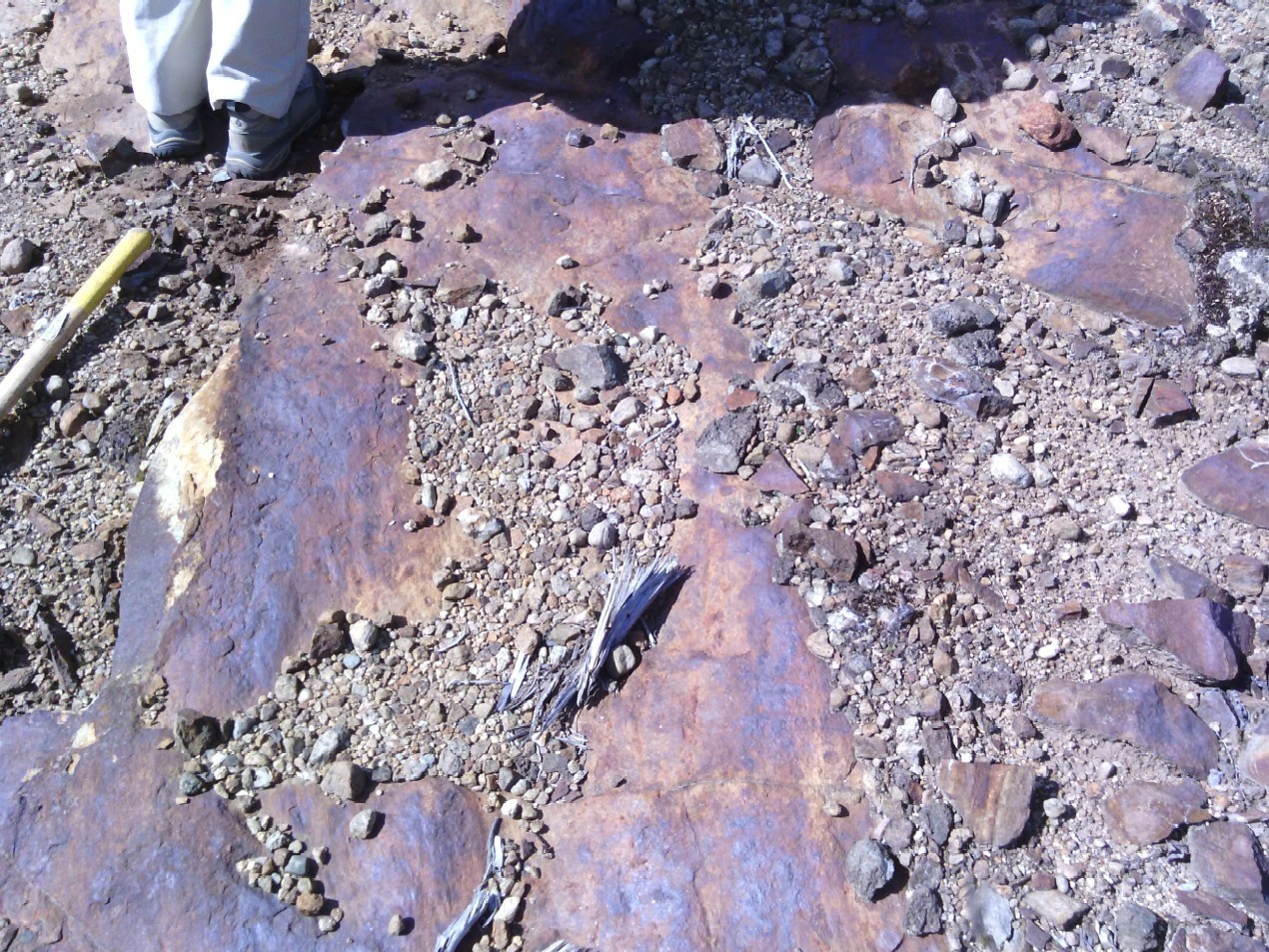 This unit consists of rusty biotite ± graphite ± garnet ± sillimanite ± pyrrhotite ± pyrite paragneiss, minor quantities of impure quartzite in millimetric beds and pyrite-chalcopyrite-garnet quartzitic wacke. Rusty paragneiss are the most abundant facies of this unit. These fine to medium-grained and rust-coloured metapelites are easily recognizable in the field. 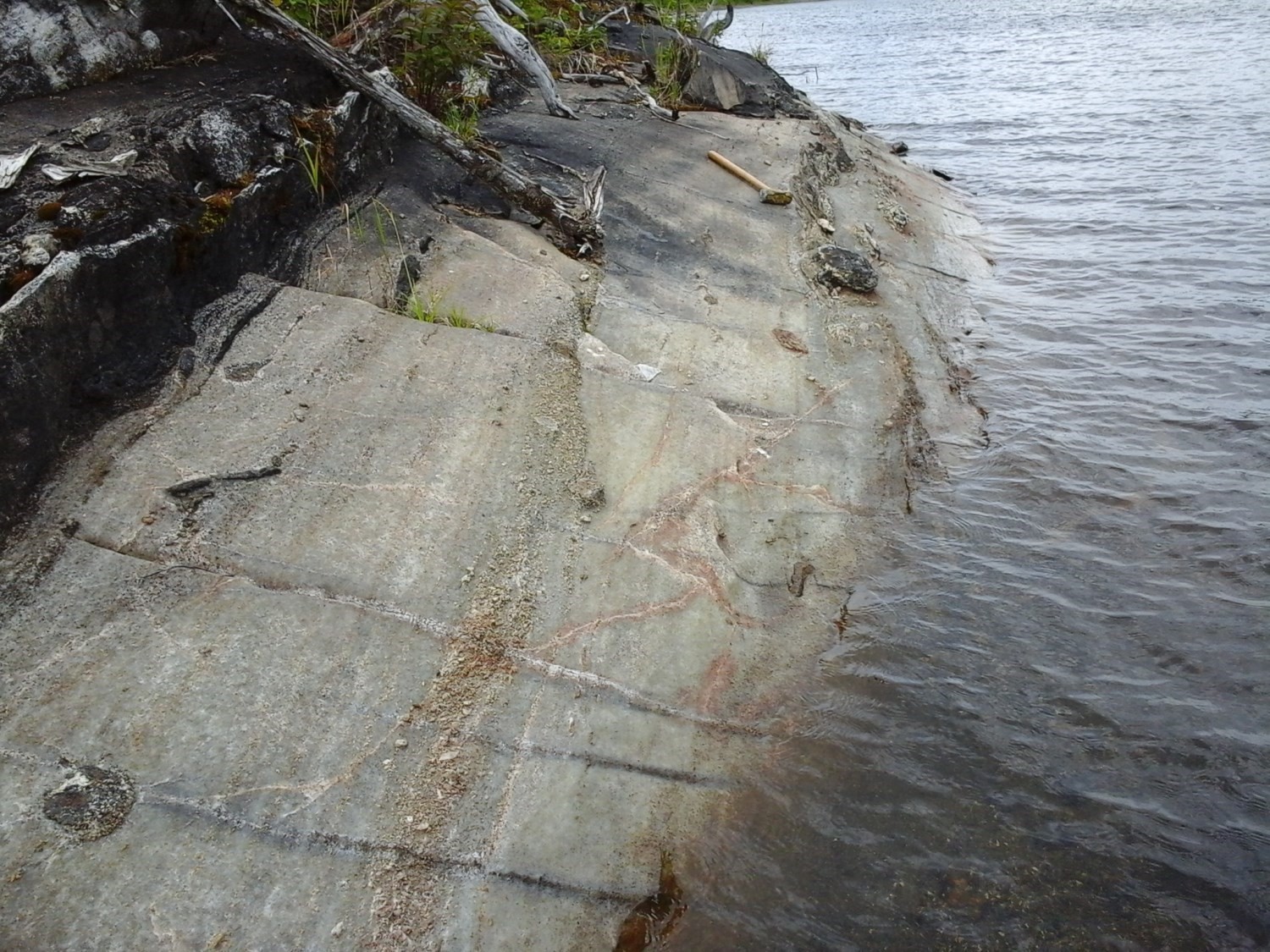 This unit consists of medium to coarse-grained calcitic to dolomitic marble with whitish to greyish fresh surface. Marble outcrops were mapped in earlier work (Lee, 1972). These marbles form thin, greyish to pinkish lenses, interbedded in biotite-graphite paragneiss. Minerals observed in all marbles in the area are calcite (55-65%), dolomite (≤10%), diopside (5-20%), biotite (<2%), quartz with undulatory extinction (3-10%) and trace minerals such as apatite, actinolite and feldspars. This unit also contains minor amounts of rusty graphite-garnet paragneiss, calcosilicate rock boudins and centimetric to metric horizons of impure quartzite. Quarzite horizons are interstratified with marbles in rusty paragneiss. A pegmatite dyke approximately 6 m wide containing orthopyroxene, clinopyroxene and sulphides (pyrite and pyrrhotite, 1-2%) intrudes into quartzose facies of this unit.

This unit consists of several facies that cannot be individualized at the 1:50,000 scale: amphibolite and garnetite, quartzofeldspathic rock and ultrametamorphic granitoids. 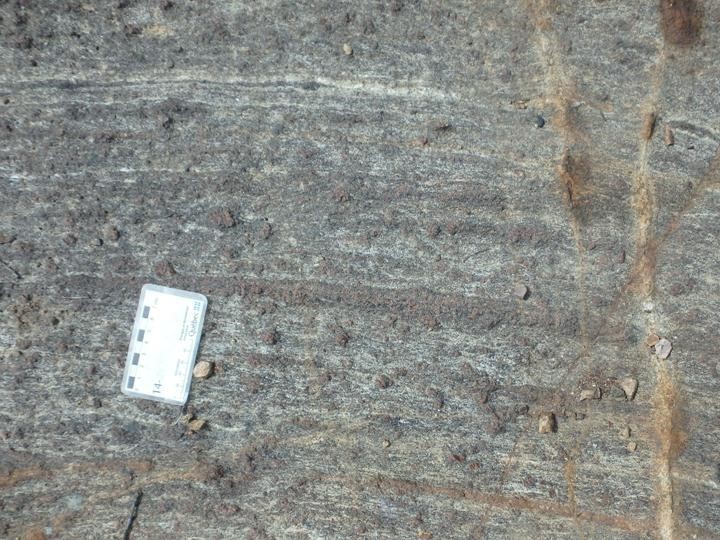 Amphibolite is fine to coarse grained and contains hornblende, garnet porphyroblasts (up to 2 cm in diameter), clinopyroxene, orthopyroxene and biotite. Some horizons of locally very garnet-rich amphibolites (30-60%) are designated as garnetites. Two types of garnetite are observed in the area. Felsic to intermediate garnetite forms decimetric to metric boudins (20-50 cm wide) in contact with amphibolites. This type of garnetite is low manganese and contains diopside, quartz and calcite. The second type of garnetite is a red garnet-rich mafic rock that is associated with rusty graphite paragneiss and garnet quartzofeldspathic rock. This type of garnetite is coarse grained, magnetic and is composed of plagioclase, biotite, orthopyroxene, twinned augite anhedral phenocrystals and pigeonite traces. The latter mineral is generally observed in unaltered basalts. 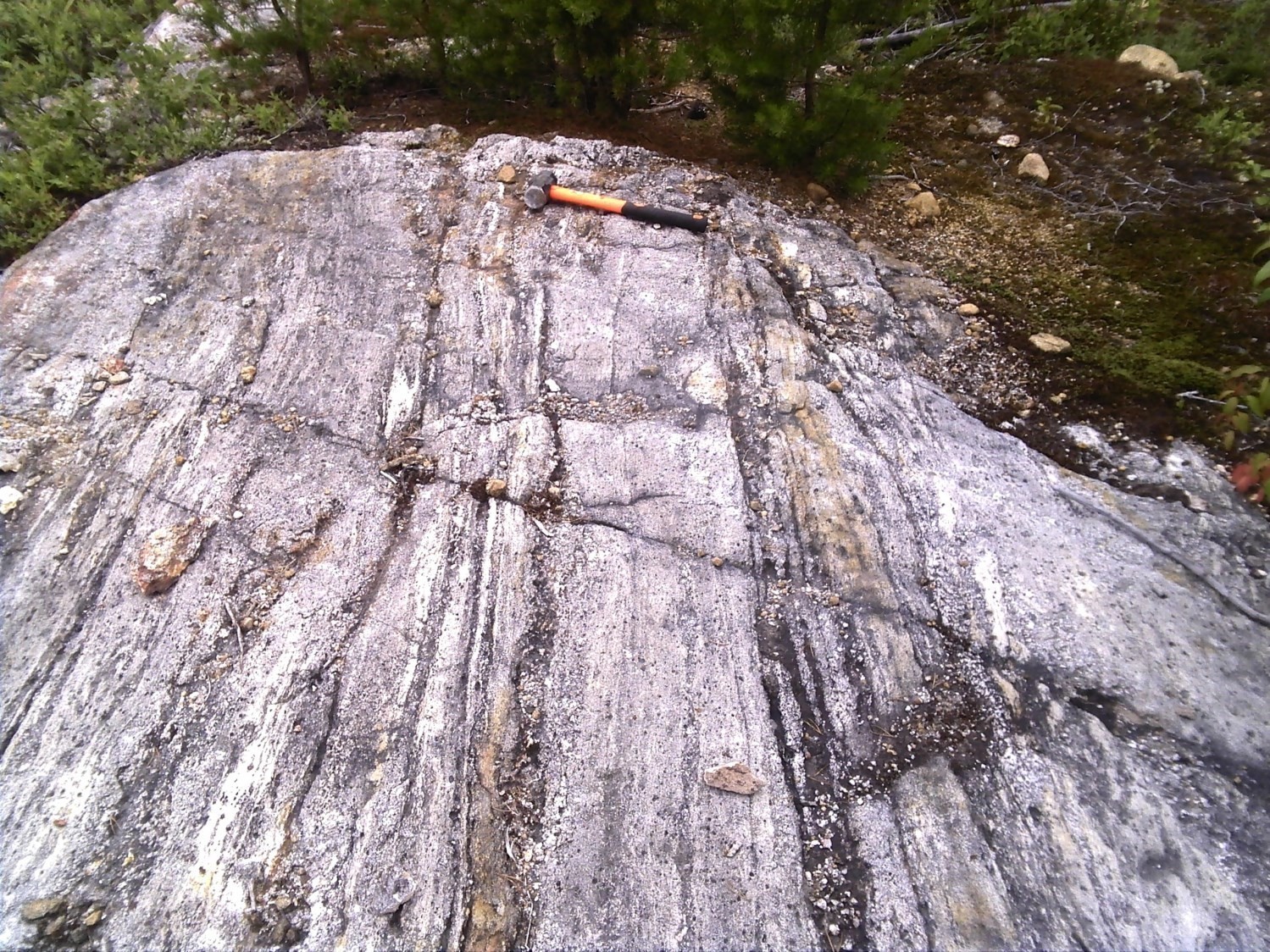 Quartzofeldspathic rock is a felsic facies with local millimetric to centimetric sillimanite horizons. These horizons, parallel to regional planar fabric, alternate with horizons richer in quartz and K-feldspar. Iron formations are banded and consist of several alternating facies rich in silicates, oxides, chert or garnet (garnetite). The silicate facies iron formation, the most important in terms of surface area, is fine grained and clinopyroxene-rich. It occurs as 20 to 30 cm thick bands and is composed mainly of clinopyroxene (80%) and plagioclase. This unit typically has contents of 52-53% SiO2, 17-25.5% Fe2O3t and 4-10.6% MgO. The sulphide facies iron formation also occurs as 20 to 30 cm thick bands. The rock is composed of garnet, pyrrhotite, pyrite and sphalerite and is heavily rusted in altered surface. Contents are 29% SiO2, 10% Fe2O3t, 5.6% MgO and 3% S.

Chert is visible in places and consists of 1 to 2 cm thick continuous bands composed solely of recrystallized, fine-grained greyish quartz. Garnetite occurs as 5 to 50 cm bands. It is fine grained and has a porphyroblastic texture associated with the presence of garnet crystals up to 0.5 cm in diameter. It is composed of 40-50% garnet, plagioclase, quartz and accessory pyrite and chalcopyrite. Garnetite contains 46.7-53.7% SiO2, 16.05-24.4% Fe2O3t and 11.8-16.15% Al2O3. 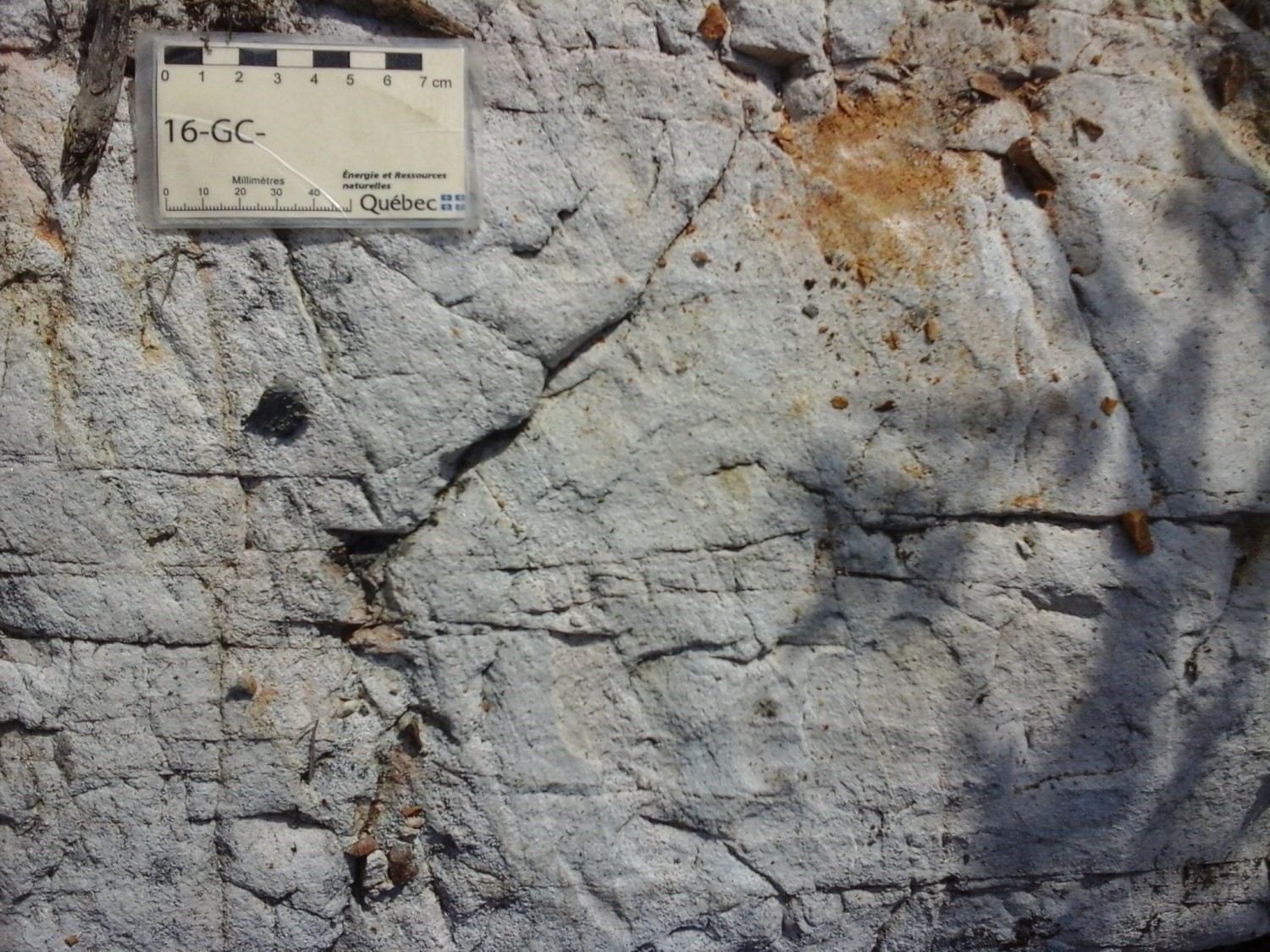 Quartzofeldspathic gneiss was only recognized on one outcrop. It is fine grained, whitish in altered surface and greenish in fresh exposure. It forms a horizon approximately 2 m thick and is composed of quartz and feldspar accompanied by acessory pyrite. This felsic to intermediate rock has high deformation (mylonitization). Gneiss contains 68.3% SiO2, 6.9% K2O and 1.8% Fe2O33t. On the Nb/Y vs Zr/TiO2 diagram (Winchester and Floyd, 1977), rocks are classified as rhyolites. The rare earth element diagram has a negative slope with light rare earth enrichment relative to heavy rare earths. Fragmentary felsic rock is the most abundant facies of the volcano-sedimentary package. It occurs as horizons of variable thickness on all the outcrops of the volcano-sedimentary package. This fine-grained lithology contains fragments made of amalgamated crystals of K-feldspar, plagioclase and clinopyroxene. The matrix is composed of biotite, green hornblende and clinopyroxene. Carbonates and epidote are acessory minerals. This fragmentary rock contains 53-58% SiO2, 2.5-4% K2O and 7.1-13.7% Fe2O3t. In order to determine these rocks’ protolith which represent a typical and exclusive facies of this area, they were plotted in the Nb/Y vs Zr/TiO2 diagram of Winchester and Floyd (1977) which indicates rhyodacitic composition.

Under the microscope, mafic minerals form millimetric horizons, while plagioclase crystals are rounded and recrystallized. Carbonates are located in fractures or occur as subhedral crystals, and K-feldspar is perthitic. Centimetric “xenotliths” (1-10 cm) are present on some fragmentary rock outcrops. These xenotliths are fine grained and mafic. Since they are only associated with fragmentary rocks, they could be interpreted as “fiammes”. This interpretation seems to support the hypothesis that these rocks are lapilli tuffs. These mafic fragments are fine grained and mainly composed of clinopyroxene, and some plagioclase and quartz. Chloritization and hematitization are observed at the fragment edges. Some apatite crystals are also associated with chlorite.

Some lithological units of this complex form metric to decametric tectonic slices in the Lacoste Magmatic Suite and in the Dugré, Pope, Vermillon and Hibbard plutonic suites. They also occur as enclaves in syenitic units of the region. They are intruded by pegmatite dykes and the Roc Suite.