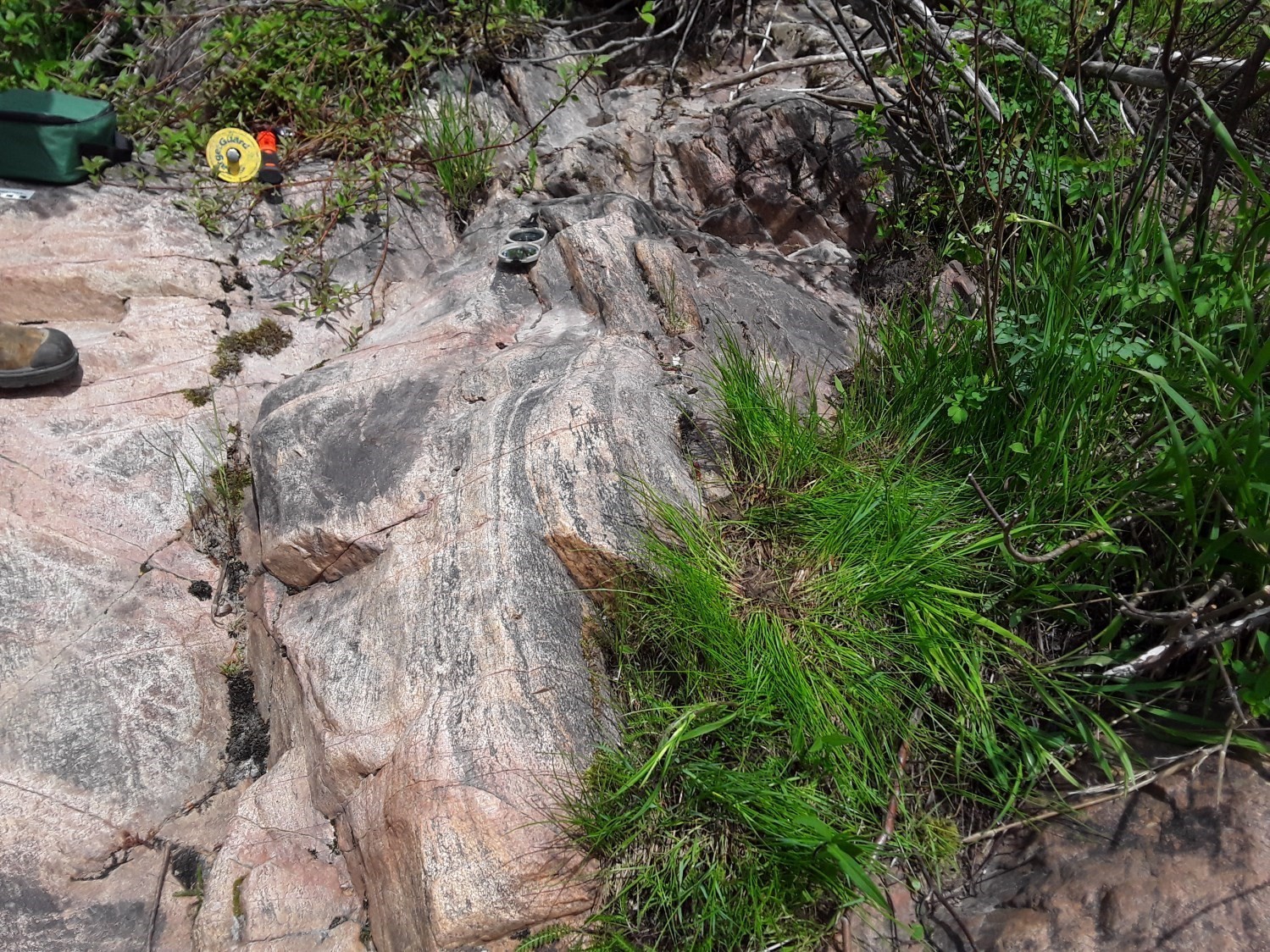 The Patrick Ouest Structural Domain was defined from a geological mapping survey carried out by Moukhsil and El Bourki (2020) in the Normandin area (NTS sheets 32A09 and 32A16).

Almost all the outcrops of the Patrick Ouest Structural Domain are located in the NE part of sheet 32A16. They display a planar structural fabric that is expressed mainly by secondary mineral foliation, mylonitic foliation or banding in intrusive rocks, or by gneissosity or migmatitic banding in metasedimentary rocks of the area.

The Patrick Ouest Structural Domain is characterized by a fairly homogeneous trajectory of the planar fabric (Sn) in most of the domain’s outcrops. The main direction is NNE-SSW with a mean dip eastward (mean foliation: 024°/47°). 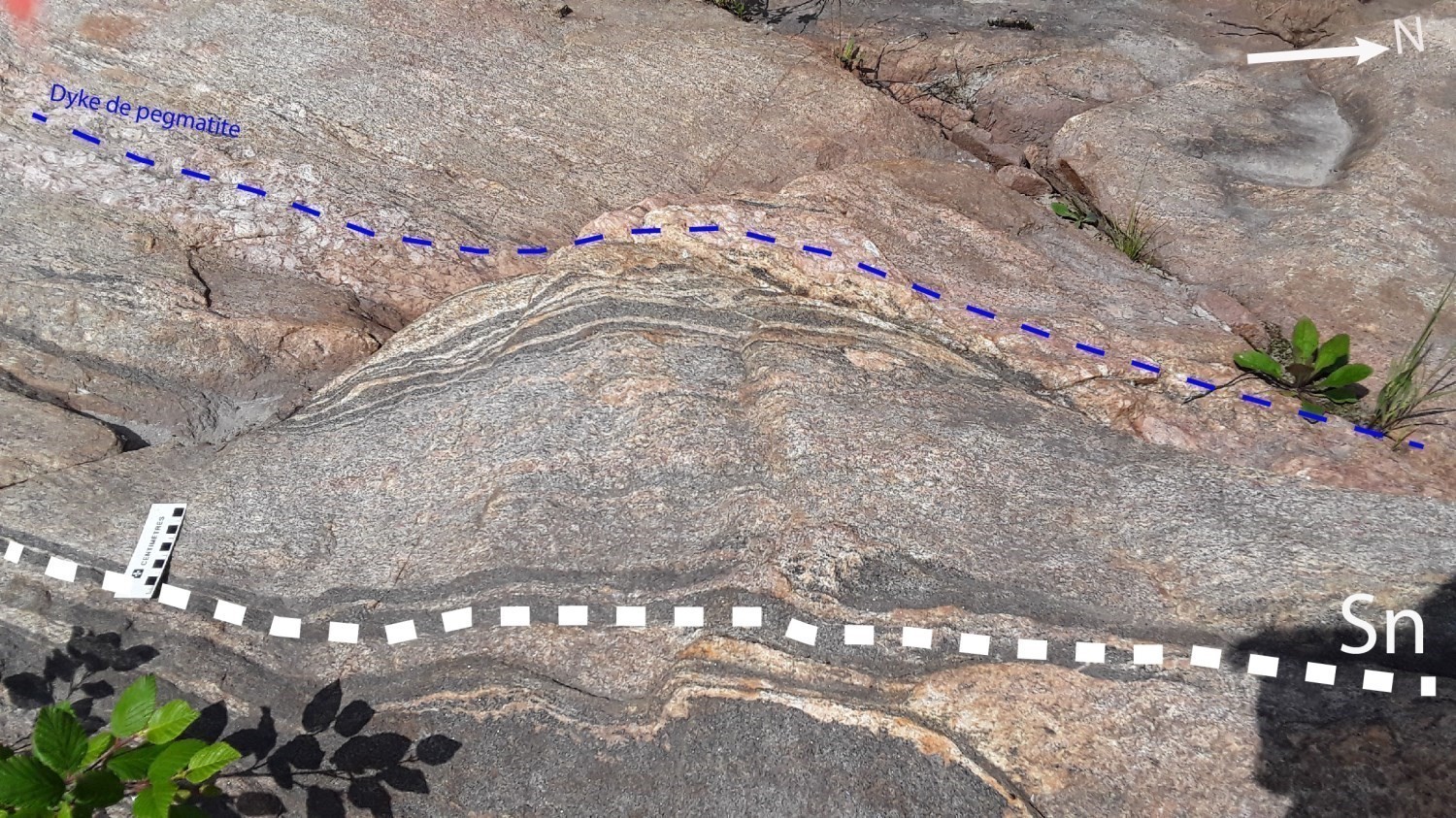 In paragneiss and calcosilicate rocks of the Saint-Onge Supracrustal Sequence, the Sn foliation is marked by a gneissosity characterized by alternating light and dark layers, respectively depleted and enriched in ferromagnesian minerals. In intrusive rocks of the Patrick Ouest Charnockite, SainteHedwidge Intrusive Suite and Lachance Manganite, the main Sn foliation is generally expressed by a secondary tectometamorphic mineral foliation with a preferential orientation of ferromagnesian minerals and, locally, by a preferential orientation of K-feldspar phenocrystals. 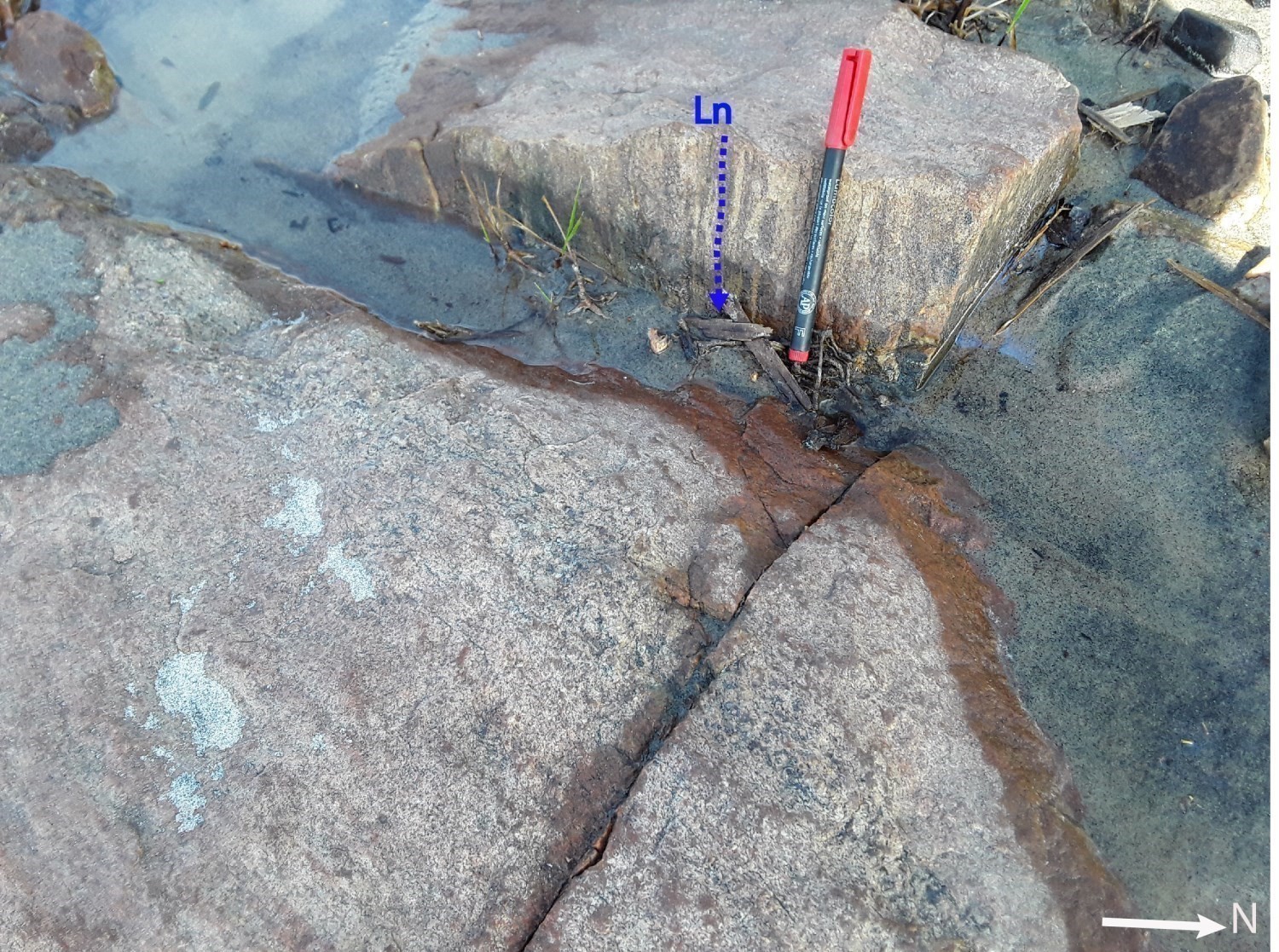 Mineral lineations borne by these planar fabrics are, in general, secondary tectometamorphic mineral or stretch lineations. Their mean direction is 116° with a dip component (mean Ln: 116°/47°). 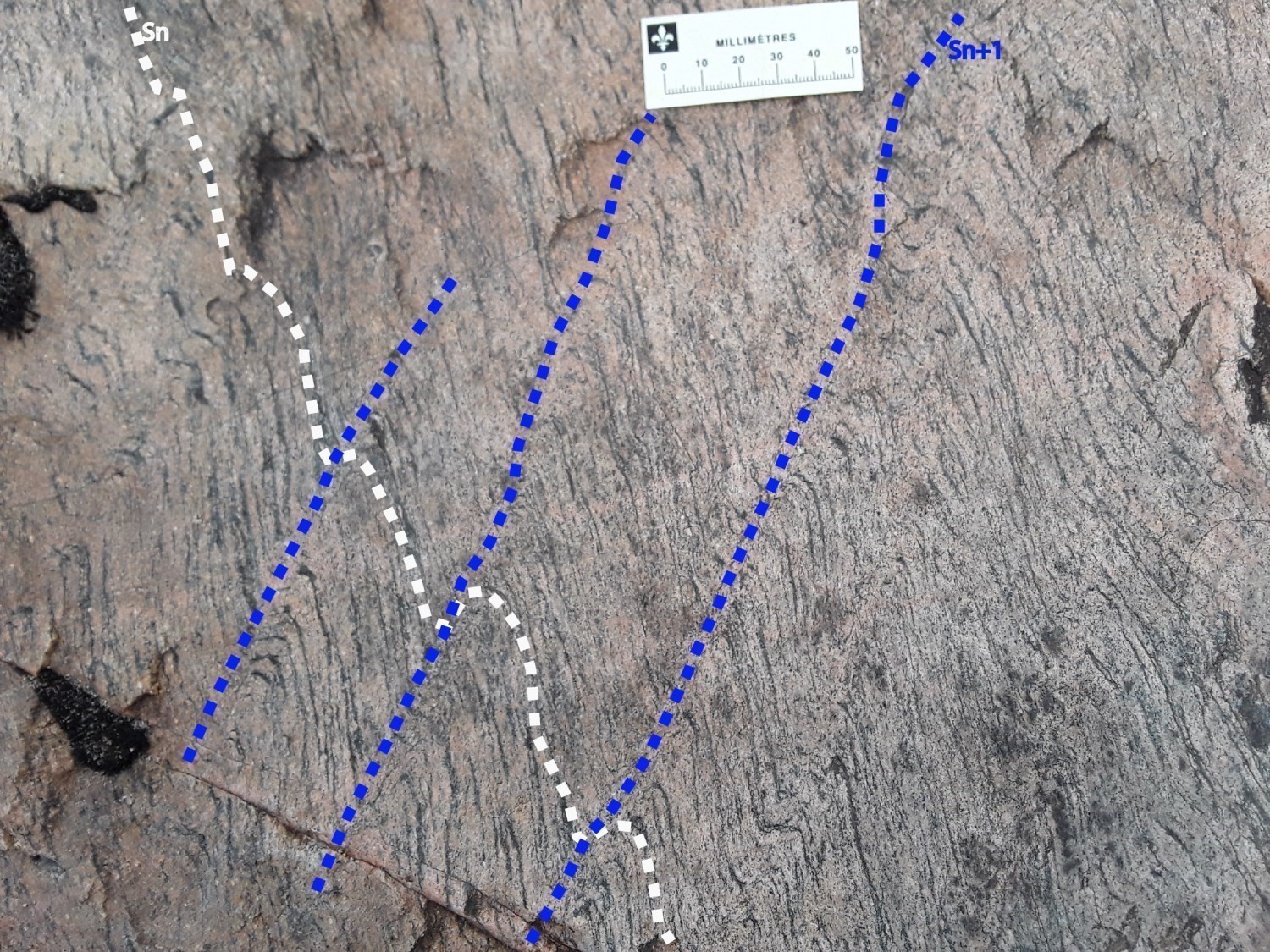 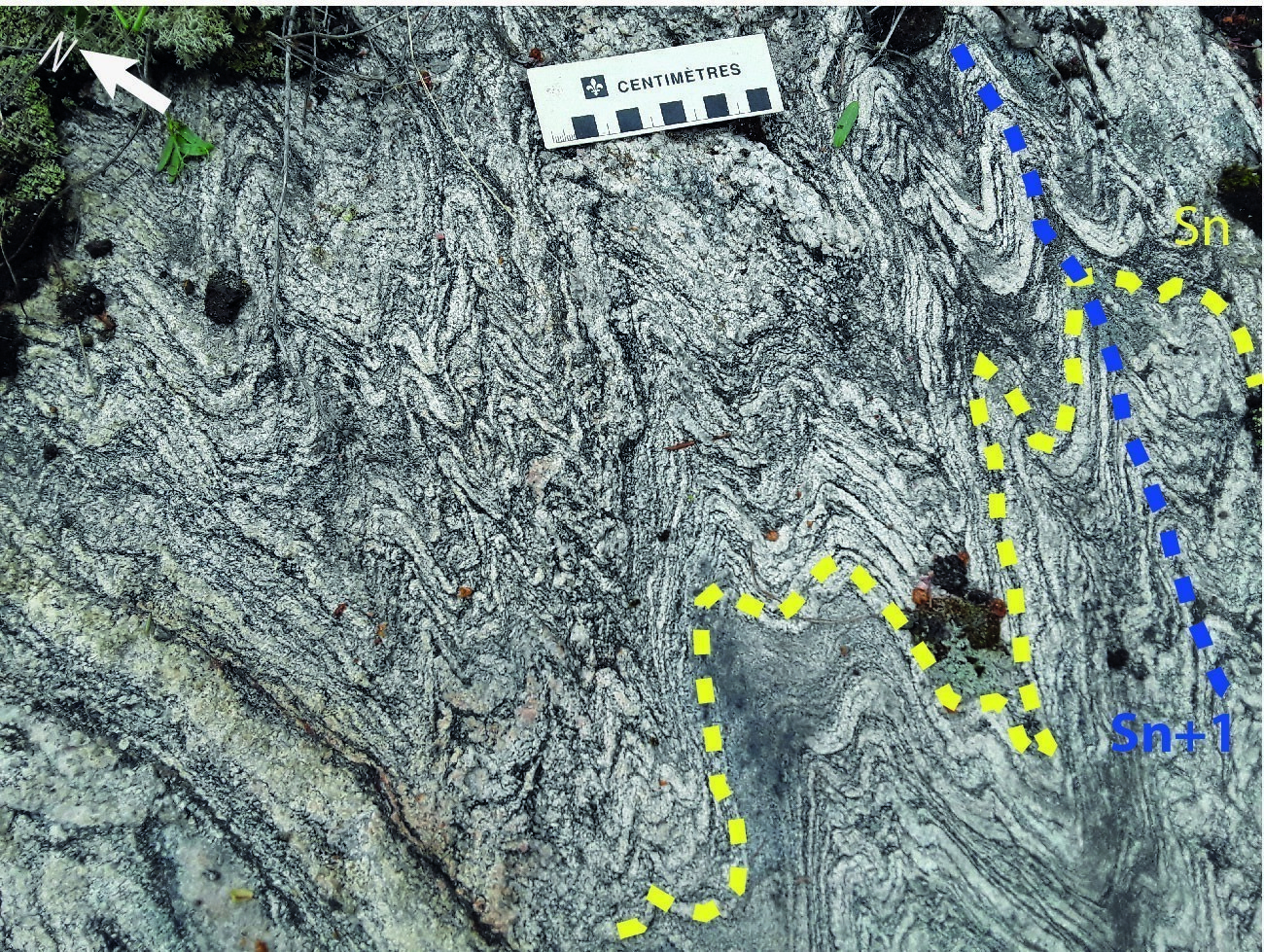 In the Patrick Ouest Structural Domain, some outcrops display a second phase of deformation represented essentially by a tectometamorphic foliation Sn+1. The latter can be easily distinguished from Sn at fold hinges, where it seems to behave like a crenulation foliation with a preferential orientation of ferromagnesian minerals. It is important to note that in this domain, as elsewhere in the area, it is difficult to measure the direction and dip of the Sn+1 foliation since it can easily be confused with Sn. 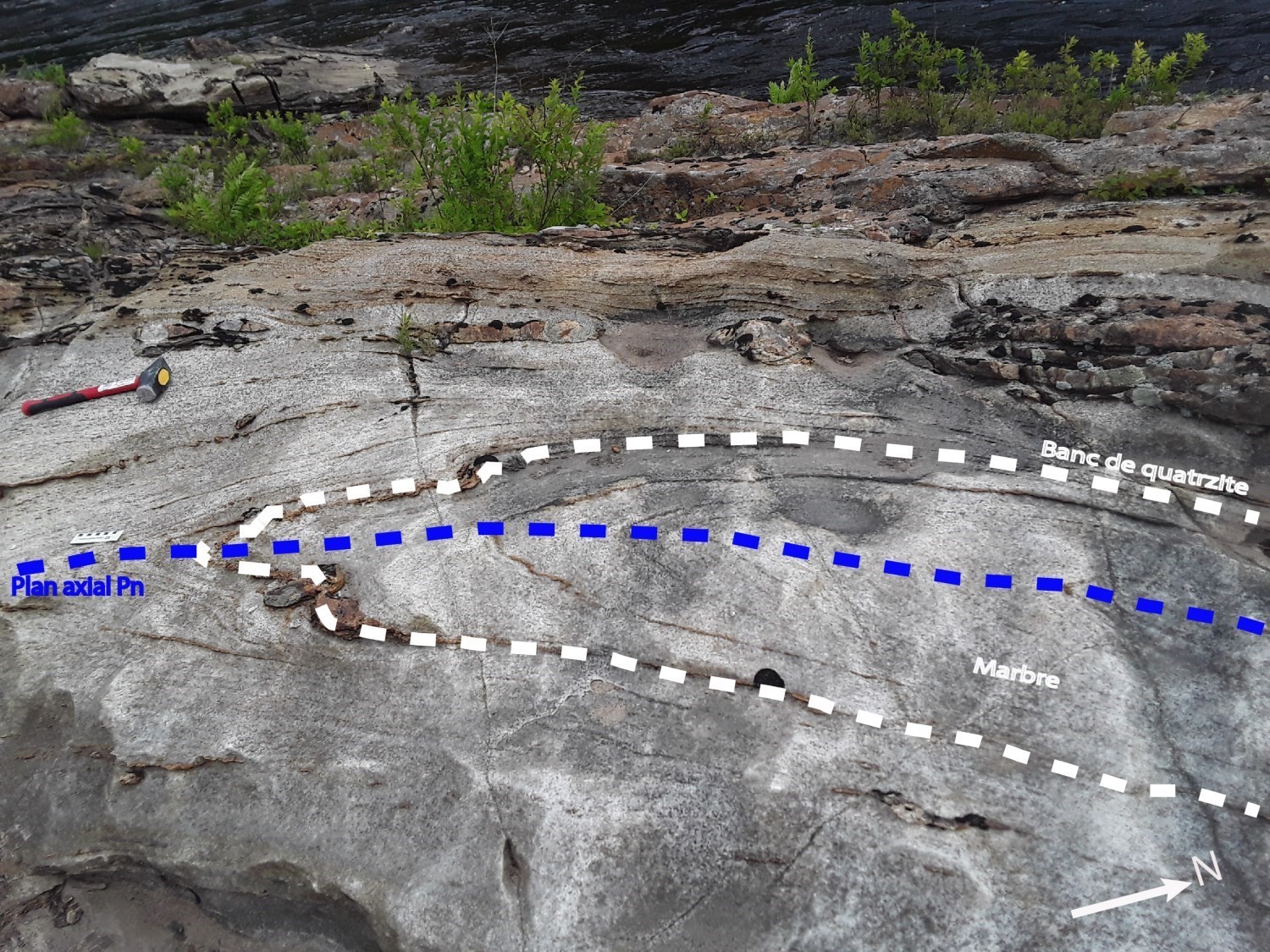 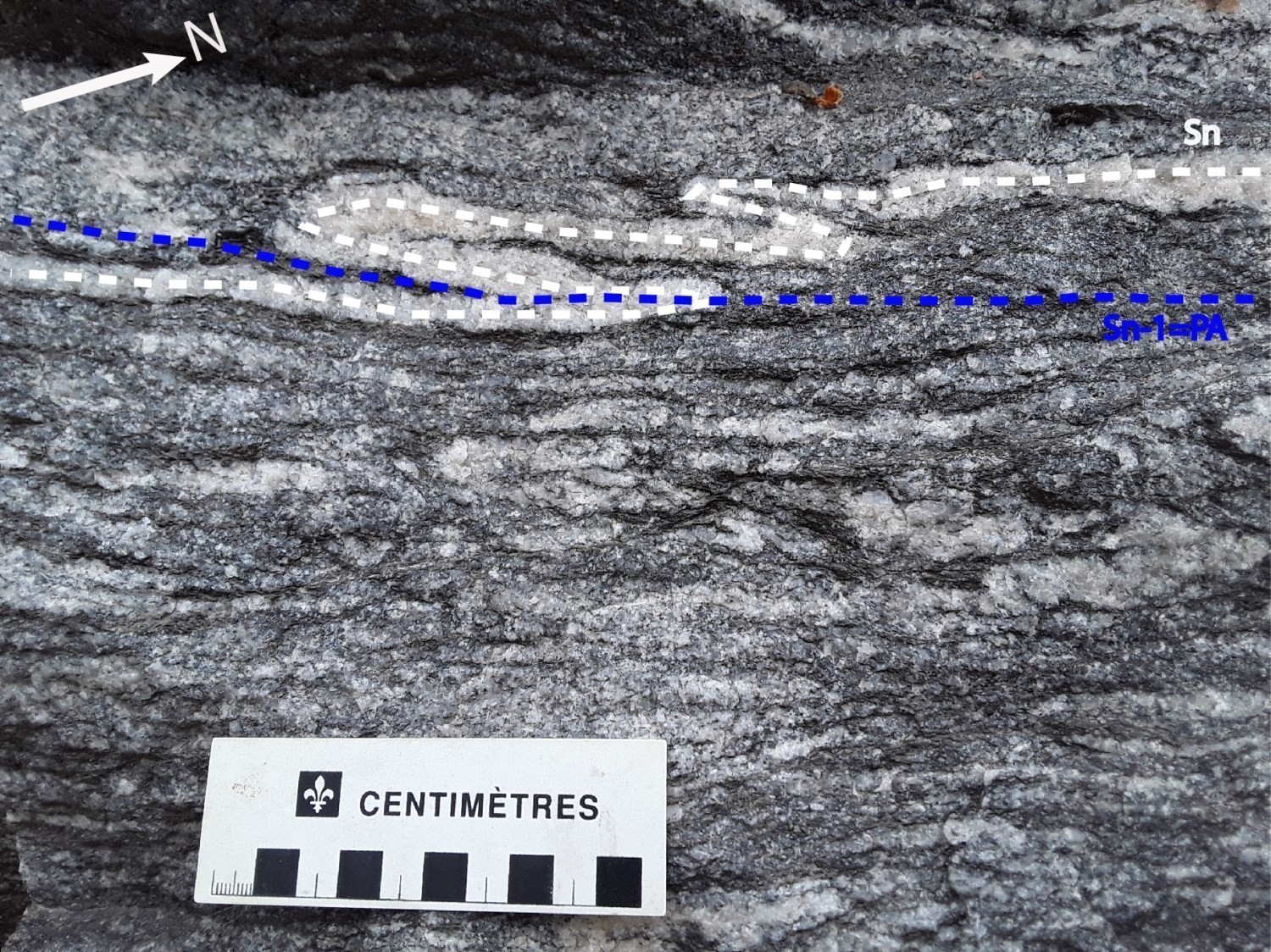 The analysis of the distribution of the planar fabric and geophysical lineaments interpreted from maps of the total magnetic field and its derivatives (Intissar and Benahmed, 2015) allow distinguishing at least two families of folding. They are marked by the trajectory of the Sn foliation which affects units of the Patrick Ouest Structural Domain:

In sheet 32A16, the Patrick Ouest Structural Domain is cut by three families of faults deduced from field observations or maps of the aeromagnetic field and its derivatives (Intissar and Benahmed, 2015).

The NE-SW family is dominant and represented by two major reverse movement faults. The first fault, with an extent of ~15 km, relates the Saint-Onge Supracrustal Sequence (mPong5) to units of the Lachance Mangerite and Sainte-Hedwidge Intrusive Suite (mPshe1 and mPshe2). The second fault, with an extent of ~50 km, separates the Patrick Ouest Charnockite (mPick1) from the Lachance Mangerite (mPlhc), Travers Suite (mPtra2) and Sainte-Hedwidge Intrusive Suite (mPshe1).

The N-S family is represented by a normal fault ~3 km long (outcrop 19-AM-47) and cuts the Sainte-Hedwidge Intrusive Suite (mPshe1).

The NW-SE family comprises nine faults interpreted from maps of the magnetic field and its geophysical derivatives.

The Patrick Ouest Structural Domain is characterized by polyphase deformation comprising at least two regional folding phases. In general, the Sn foliation marks the early phase of  deformation of the domain and is represented by : 1) migmatitic gneissosity or banding in quartzofeldspathic paragneiss and calcosilicate rocks of the Saint-Onge Supracrustal Sequence; 2) secondary tectonometamorphic mineral foliation in intrusive rocks of the Sainte-Hedwidge Intrusive Suite, Lachance Mangerite and Patrick Ouest Charnockite.

The trajectory of the Sn foliation draws upright and overturned synform and antiform folds corresponding to two episodes of deformation. Firstly, Pn+1 represents first generation folds (generally isoclinal, transposed and dismembered) whose axial planes are oriented N-S, which could indicate an E-W compression phase. The second folding episode, Pn+2, is characterized by folds whose axial planes are NE-SW oriented. This episode is probably related to an NW-SE compression phase having slightly curved axial plane traces of the Pn+1 phase.

More than twenty samples representative of lithostratigraphic units of the northern part of the Patrick Ouest Structural Domain (sheet 32A16) were analyzed and studied under a polarizing microscope. The objective was to characterize the type of metamorphism and its distribution in the domain. However, mineralogical assemblages and petrographic characteristics of these samples indicate that metamorphic conditions of this part of the domain mainly reached the granulite facies, including some zones at the upper amphibolite facies. The presence of orthopyroxene reflects temperature conditions typical of the granulite facies with, in general, a coarse grain size and interlobed texture. In places, an assemblage of biotite-hornblende ferromagnesian minerals, without pyroxene, can be observed, which can be explained by retrograde metamorphism from granulite to amphibolite facies.

The high-resolution total magnetic field map (Intissar and Benahmed, 2015) of sheets 32A09 and 32A16 indicates that the pattern of the Patrick Ouest Structural Domain (DSpko) is quite heterogeneous, including areas with highly contrasted magnetic susceptibility. In the northern part of the domain (sheet 32A16), the magnetic pattern shows an elliptical annular structure in the Lachance Mangerite (mPlhc) and the NE end of the Patrick Ouest Charnockite (mPick1). However, in the Travers Suite (mPtra2) and Saint-Onge Supracrustal Sequence (mPong), the magnetic pattern is characterized by an isotropic banded structure with low magnetic intensity.

Higgins and van Breemen (1992) obtained an igneous crystallization age of 1142 ±3 Ma in an undeformed leucogabbro of the Lac-Saint-Jean Anorthositic Suite (sheet 32A16), and van Breemen (2009) obtained an age of 1143 ±2 Ma for the Patrick Ouest Charnockite. As for the Lachance Mangerite, it was dated 1044 ± 6.9 Ma (Papapavlou, 2019). This would mean that the Dn deformation affecting the Patrick Ouest Structural Domain is posterior to 1.04 Ga for the Dn+1 deformation, i.e. it would have occurred after the Middle Grenvillian (1050-1018 Ma), as defined by Gower and Krogh (2002) in the eastern part of the Grenville Province.